Lots of hearts - lots of reasons to smile

With all due respect to rumors about the intentions to launch processors with a little more than ten processing cores in the home performance market, Elite 's technology AMD, As well as that of Intel, Continues to be reserved for the world of servers and the powerful processing field - where we will mark 2017 as the official form as the year we moved to central processing units with more than 30 (!!) physical processing cores.

AMD does not shrink

The red chip developer has abandoned its old Opetron brand with the transition to the "Zen, And will offer its top server processors and processing under the name Naples, starting in the second quarter of 2017 - when we already know that the most advanced model in this new era will provide 32 cores Zen, Which will become 64 logical cores using its SMT (Simultaneous Multi-Threading) technology.

The Naples processors will be composed of four separate chips that will be assembled together on a single platform and within a single chassis (ie, four chips very similar to the ones that will be combined to create a monster of 32 active cores) and the new platform will support the integration of two such servers on a single board, A link in the new Infinity Fabric technology that will work between them.

The Naples processors will support the memories DDR4 Quickly 2,400MT / s, with eight channels and 16 slots Memories For each of the two processors that can be included in the platform - which will allow up to terabytes or even up to 2 terabytes (!) Of dynamic memory based on Memories With 32 GB and 64 GB each, respectively. Monstrous, have we already said?

B-AMD Hope to be superior to systems based on Xeon processors Intel Thanks to a larger number of cores and handling of fast DRAMs - but this is something that can only be objectively examined in a while, when first of all it will be necessary to gain the trust of the various manufacturers and components of the servers. We are expecting a very big struggle here, no less than in the domestic market - that's for sure. 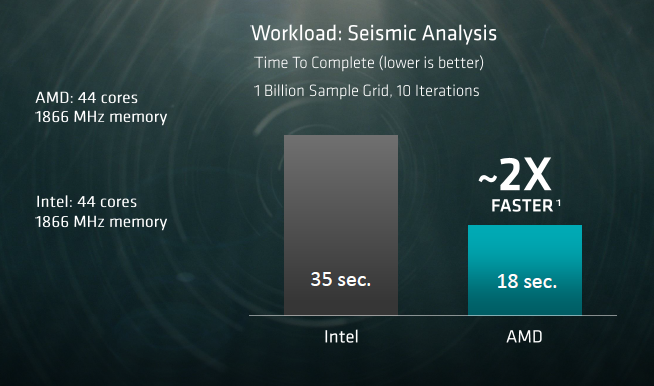 The swan song of Skylake

Perhaps as a pre-emptive step for the arrival of the Naples processors, but probably mainly because of natural development designed to accommodate constantly changing market demands Intel Preparation chip Generation ServersSkylakeIts new EP featuring 32 physical processing cores and 64 logical cores - for the first time ever (if not counting their Xeon Phi accelerators architecture And a completely different vocation).

The rumors about an unprecedented new model were first received at the end of 2016, but now we have the name Xeon E5 2699 v5 and a host of results from the Geekbench performance test, which offers a more powerful 50,000 score than multi-core capabilities, 2.1GHz to 2.3GHz for each Core And the core - and even proof, ostensibly, that Google is already using a product that has not yet been officially unveiled as part of their powerful cloud servers.

Intel may have brought Naples ahead of the market and has received the support of one of the largest players in the world of servers (and the world of technology in general), but it would be interesting to see how the long-awaited return of AMD To this prestigious area, ostensibly with price levels that will cut those of the families of the "Xeon, Will affect the balance of power and the various collaborations.

Although the advent of 32-core processors for servers is not directly beneficial to the home consumer, potential can still be seen in this situation. As a higher number of cores becomes the default and standard in the field, there will be an increased chance that the domestic market will also progress to an increased number of cores accordingly, and this will spur a gradual adjustment of software and applications, and ultimately the processing power available to us all And this is something we will never oppose.