In this review, we take one of the most exaggerated motherboards on the market, based on Intel's Z390 chipset, which was recently launched alongside the new Core i9 processors Core i9 9900K. The goal is simple - to produce the most sophisticated and advanced tool for their ambition Overclocking By unconventional means.

It has been over a decade now that there is one series of motherboards that dominates the world overclocking and performance world and is the Republic of Gamers of Asus. While in recent years the brand has become wider and today Also includes more budget motherboards, There is one series per chassis designed for the wealthy and unbridled in hardware aspirations.

The series focuses on the world of motherboards for the mainstream Intel Is the Maximus. all Motherboard Which includes this name as part of its full name belongs to the parenting of motherboard engineering of Asus, And many of the components in these panels are identical to all Maximus models. In each generation of chipset added a number of Roman after the name, this time we are in the 11 generation of Maximus, Generation XI. 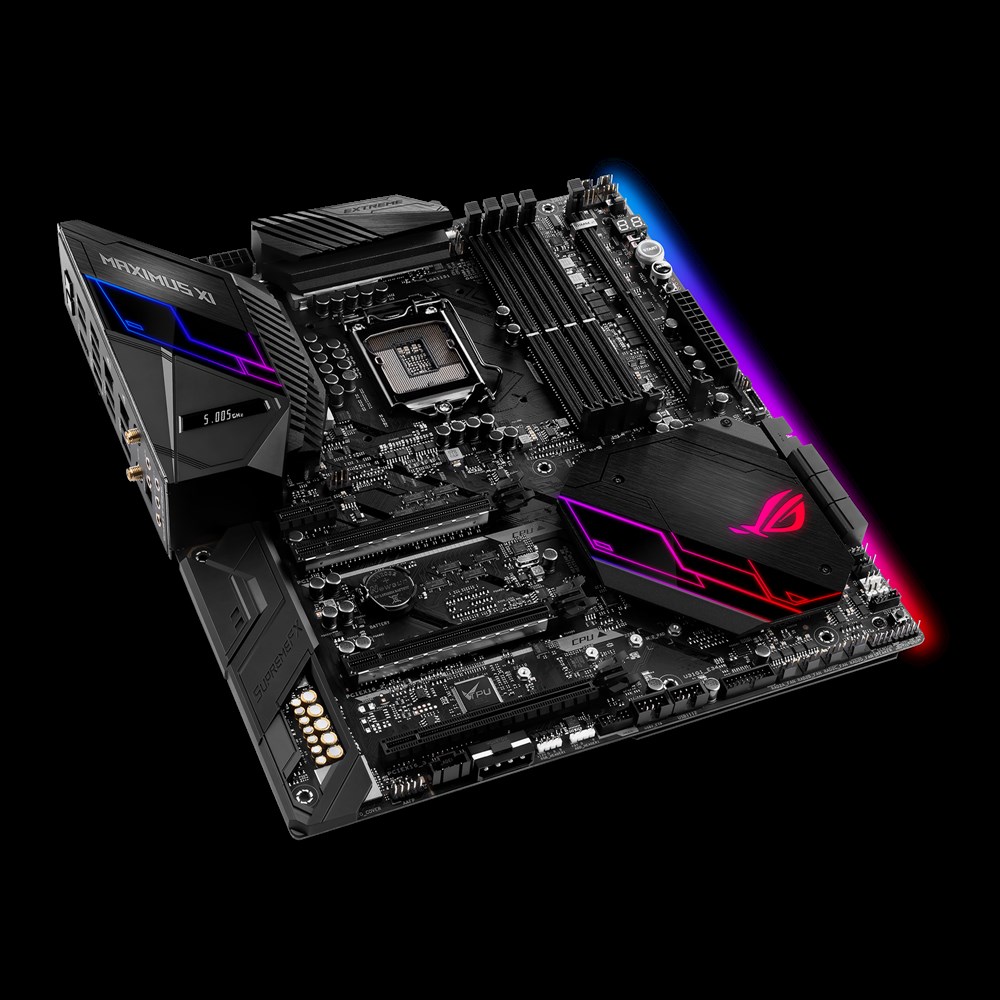 Whereas in the past the Maximus series included at most 3 or 4 motherboards, today the range is wider and includes more models:

In this critique we will recognize the Maximus XI Extreme, Which is considered to be the most senior model for those who want to use a motherboard for everyday use beyond the challenges Overclocking Occasional. This model is priced at about NIS 2,300. 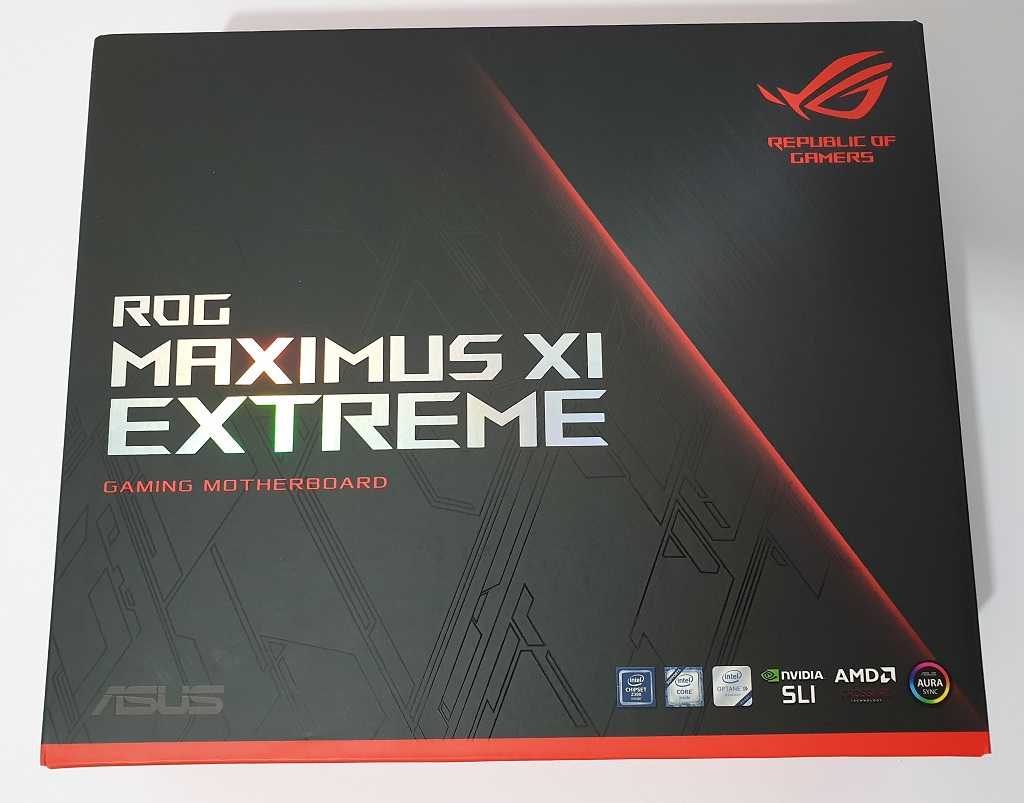 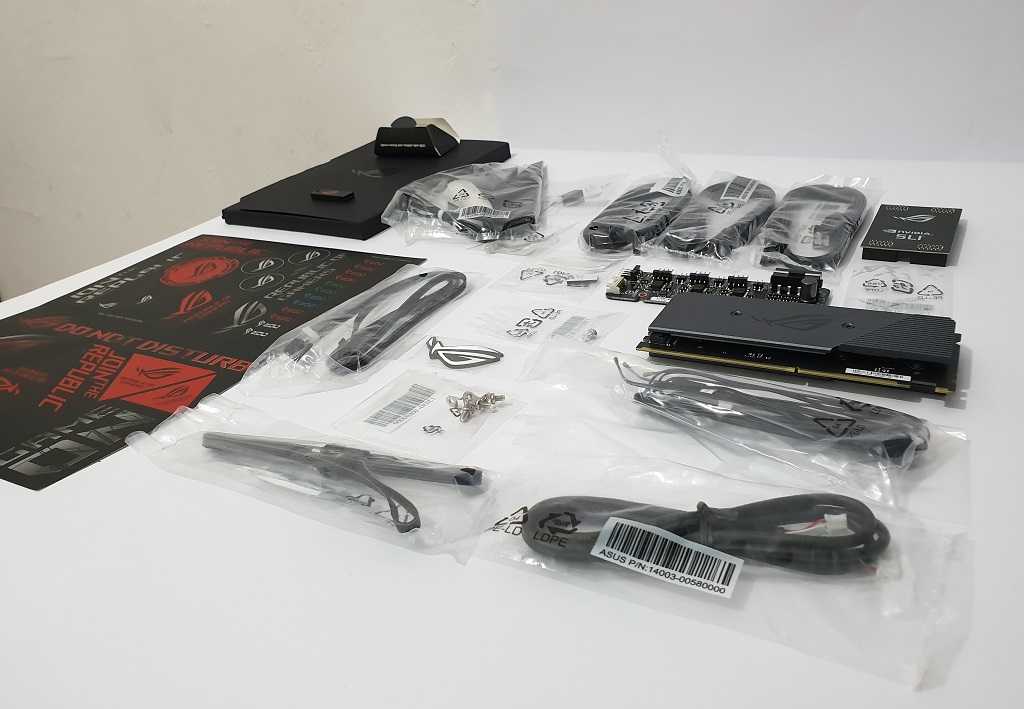 In the package you get:

It can not be said that Asus does not invest in its advanced motherboards packaging. There is here everything that ambition needs on the way to assembling a very advanced computer, and beyond that. 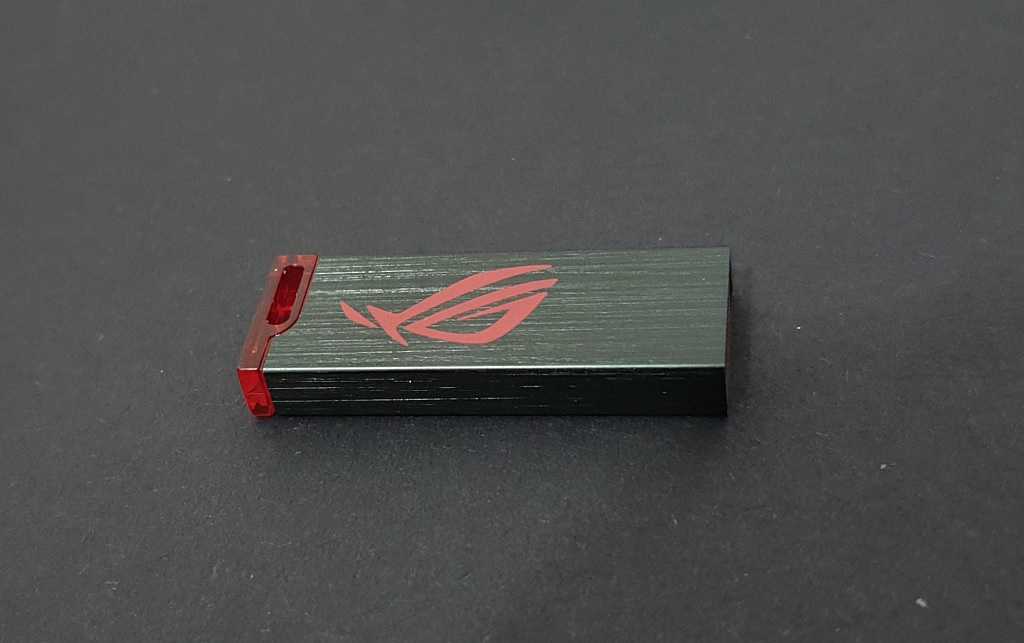 I am very happy that we are finally moving from useless disks to my drives USB Small install Drivers, This is a very respectable addition. 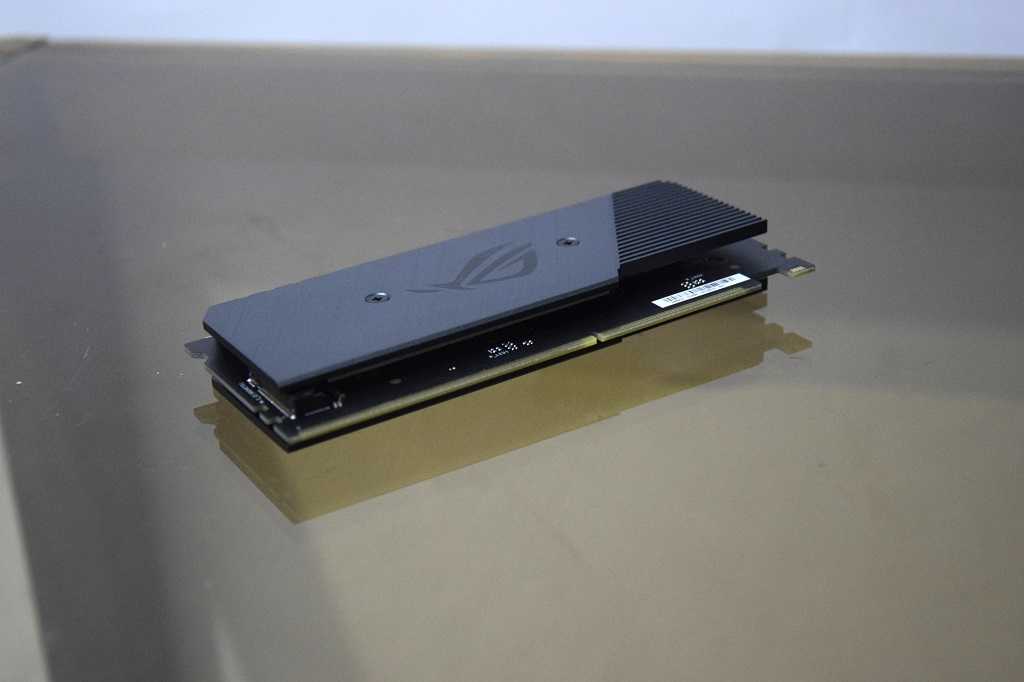 This product that comes in the packaging is one of the biggest inventions of the hardware world in recent years, in my opinion, the DIMM.2. This card is memory-like RAM Is actually a two-sided mooring device for M.2 drives designed primarily for drives NVMe On the interfacePCI-Express. In fact, the interface on which this card connects to the motherboard is PCI-Express Which is arranged differently and connected directly to the processor.

The DIMM.2 comes with fairly serious cooling elements and thermal pads already installed from the inside on both sides. The card sits comfortably to the right of the H-DDR4. 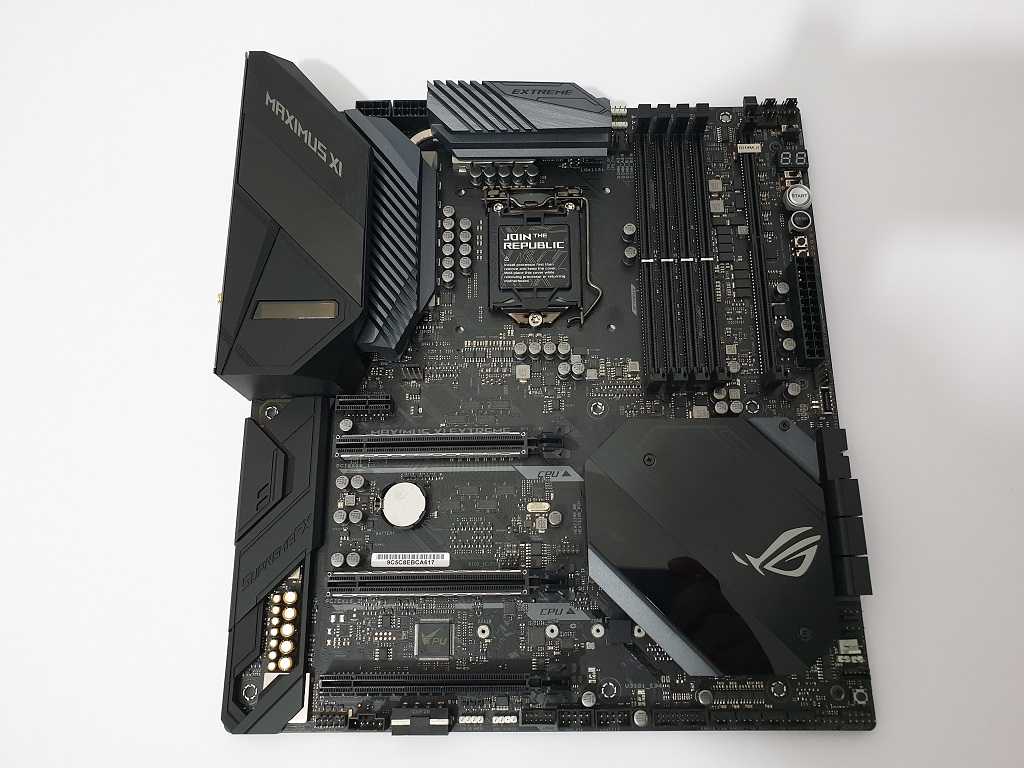 Here are some facts about motherboard Maximus XI Extreme Of Asus: 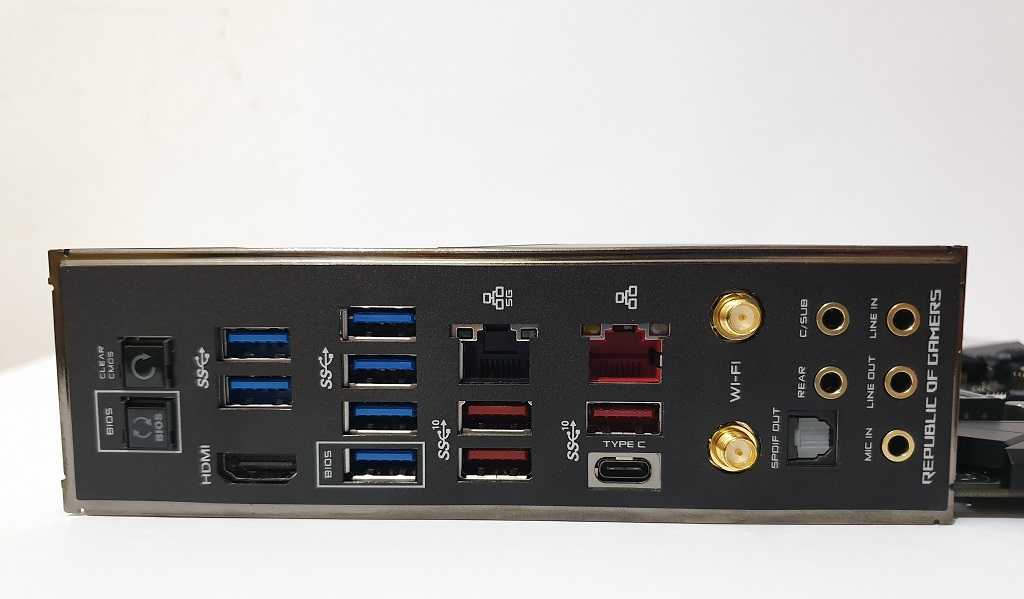 On the back of the motherboard is the rear ports. There are sound outputs in the 7.1 channel array, the WiFi connection, and connections USB And network.

The WiFi controller also includes Bluetooth with the new 5.0 standard. The controller is an 9560 sample of Intel And supports 1730 megabits per second as well as Dual Band. This is the most advanced WiFi controller you will receive as part of today's motherboard.

Connection USB One (the white frame) is used to automatically burn bios directly from a USB disk without the need for a processor or installed memory, a powerful tool for adapting the motherboard to new processors without the opportunity to update in advance.

The portHDMI Is actually the only output port on this motherboard and is used to get a view of the graphics core built into the processor.

In addition to these interfaces there are also emergency buttons to reset the bios and switch to the second BIOS chip on the motherboard. 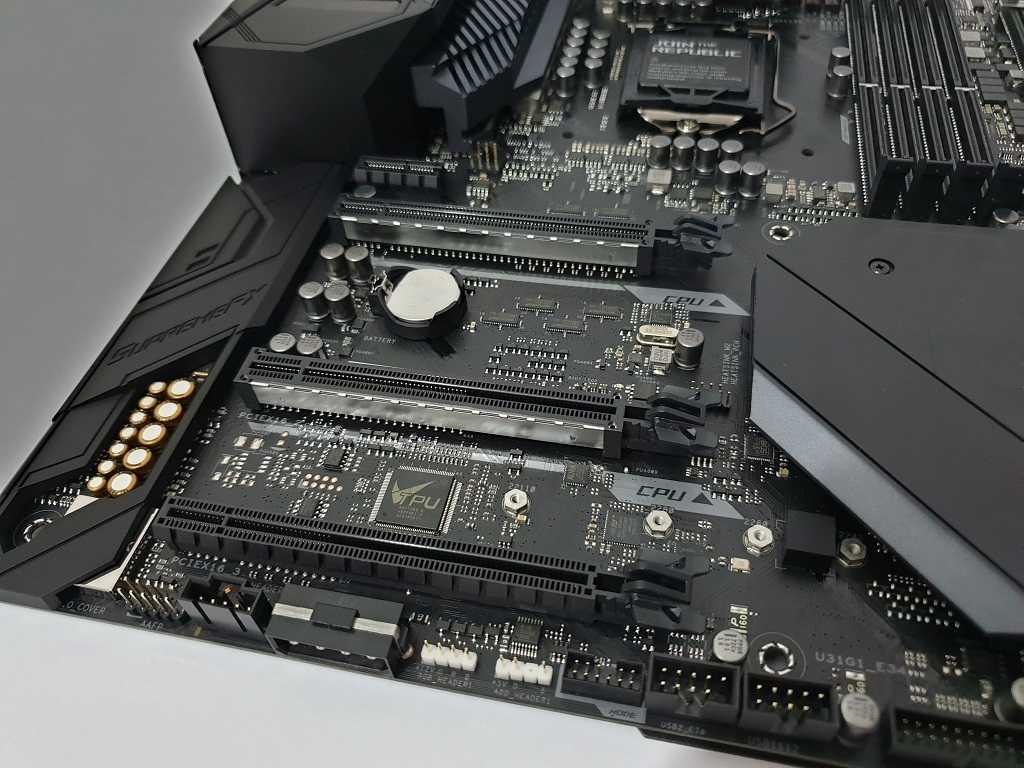 InterfacesPCI-Express This motherboard is few and far between. Asus even make sure which interfaces are connected to the processor so you know which ones are connected to the chipset. The bottommost interface runs on the X4 and the smallest upper in X1 format. Single video card inPCI-Express The top will call in a full channel of X16, installing an additional video card will reduce that of the first to X8 and the other will get anyway X8.

The sound card in this motherboard is based on Realtek's successful ALC S1220, although it is very important to remember that a sound processor is only part of the sound quality, no less important is the filter and the signal around it. Japanese Nichicon receivers are used for filtering and receiving electricity, as well as the ESS ES9023P amplifier. Sound amplification is especially important for headphones with high resistance. 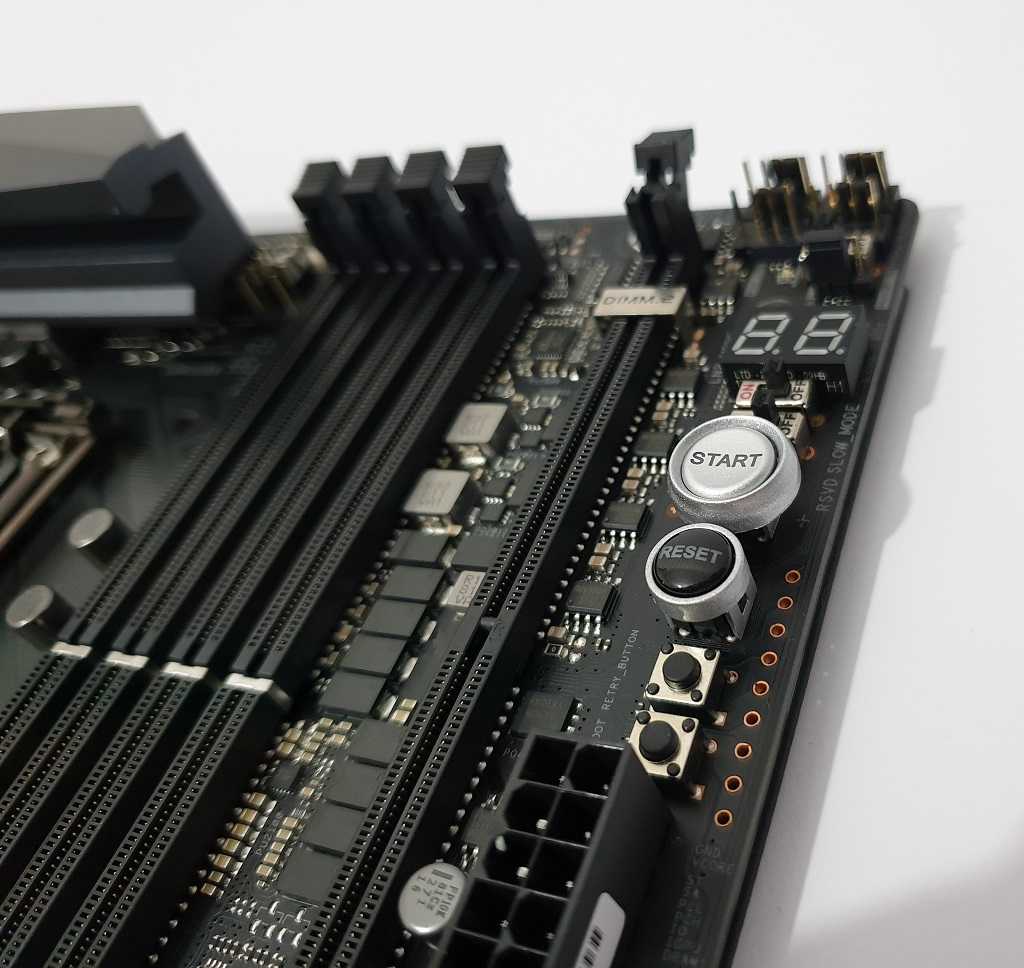 In the upper right corner of the motherboard is some of the most important tools Maximus XI Extreme offers. There are lights that tell you the procedure of checking the components when the computer is turned on, and they will stop when a particular component, such as a processor, is malfunctioning זיכרון.

There is also a simple LED screen for codes to solve problems more complexly. Two switches under the screen are designed to accelerate under liquid nitrogen, with Slow Mode causing the processor to operate at its lowest frequency to immediately reduce power consumption. The LN2 mode enables significant increase in the various processor voltages, far beyond the official recommendations of the LNXNUMX Intel. This is done in order to enable the exploitation of extreme curvature, such as liquid nitrogen or liquid helium.

The copper rings are designed for a multimeter to accurately measure the years of the system voltage such as core voltage, memory controller voltage and even that of the graphics core in the processor.

The black buttons are designed to reload the computer system without going through the boot boot procedure, and the "Safe boost" button loads a profile in a personal setting, which aims to quickly load the computer for software manipulation without risking unstable settings. 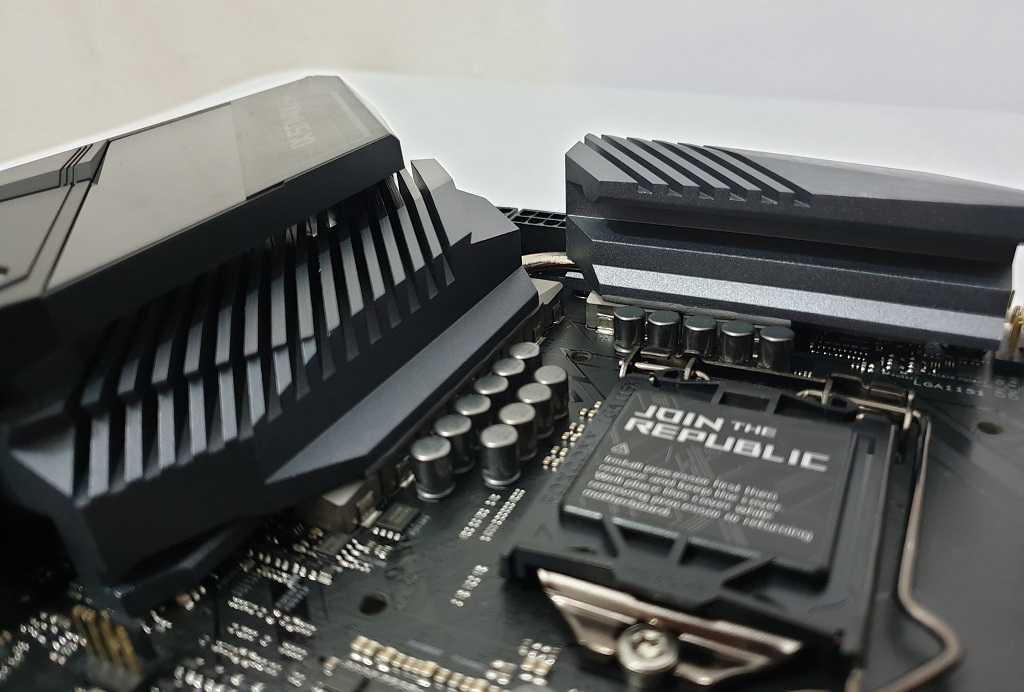 This is one of the most impressive cooling systems I've seen in recent times. It looks like a system Cooling And not as a uniform block that it is doubtful that such a system will be disturbed. There is a pipe used Cooling In this system, and it is cherry on the cake. 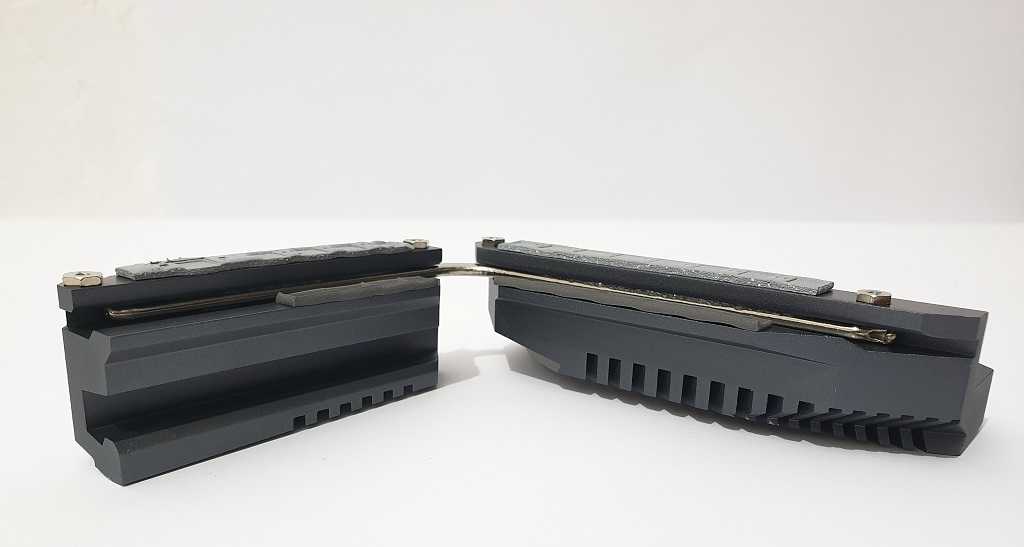 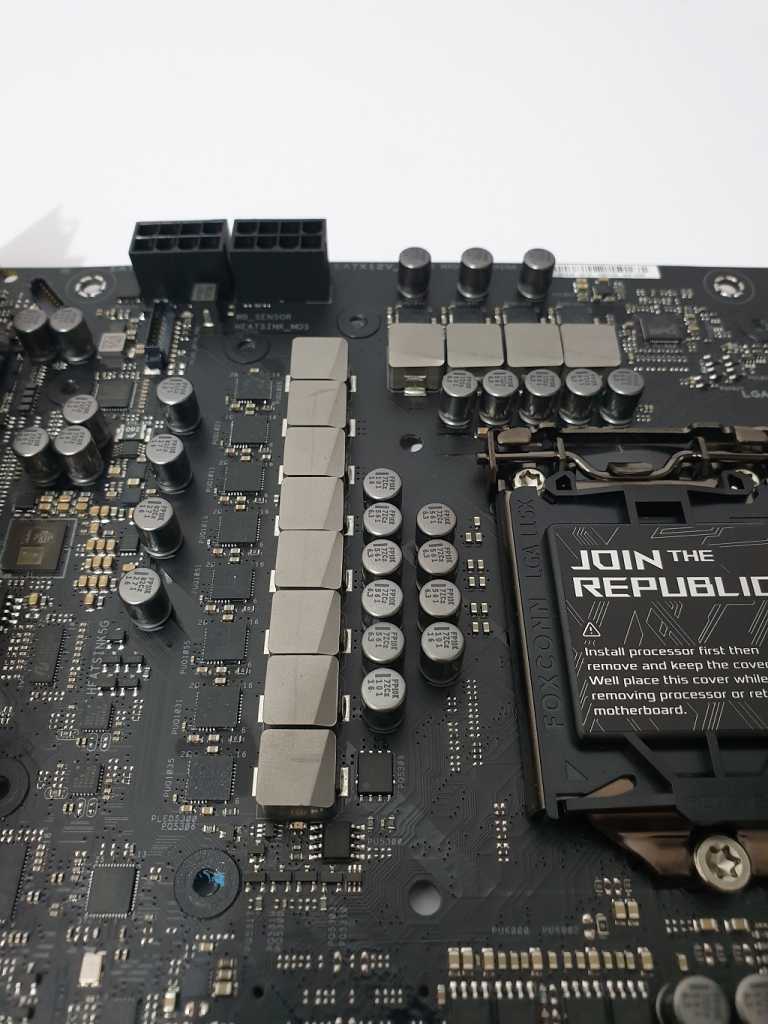 This is perhaps the most important part of this motherboard, which is why people who want to push the CPU-Core Their new i9 edge will want this motherboard. The processor power supply is built from a set of 12 stages, with 10 from them reaching the processing core and 2 to the graphics core and processor controllers.

These are IR3555M International Rectifier stabilizers set to a maximum current of 60A. Frequent use is made mainly in motherboards for the maximum seating in the chip sets X299 and-X399. So far their presence in LGA1151 has been very limited. Here we see an array that surpasses even many of the most extreme boards on the market, yes, those that are also intended for 18 processors cores.

This electric capacity is tremendous and an overkill for everything it processes Core i9 9900K can give, even with Cooling extreme. No matter how wild, these bars can not break through. Even if the theory consumes 400W, it will not challenge this voltage stabilization system with the cooling that comes with the motherboard. 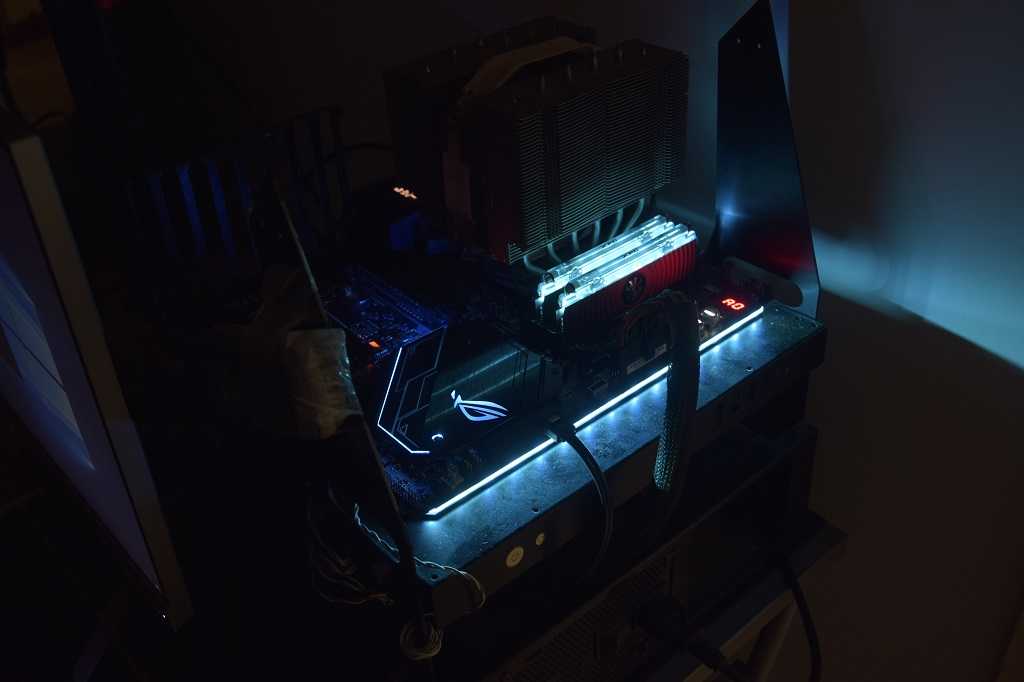 The motherboard has been tested using the Core i9 9900K processor, the new flagship Intel It has 8 cores and an impressive heat emission.

We have used Noctua NH-D15S advanced air cooling as well as closed NZXT Kraken X62 water cooling to perform The fast And check board capabilities. 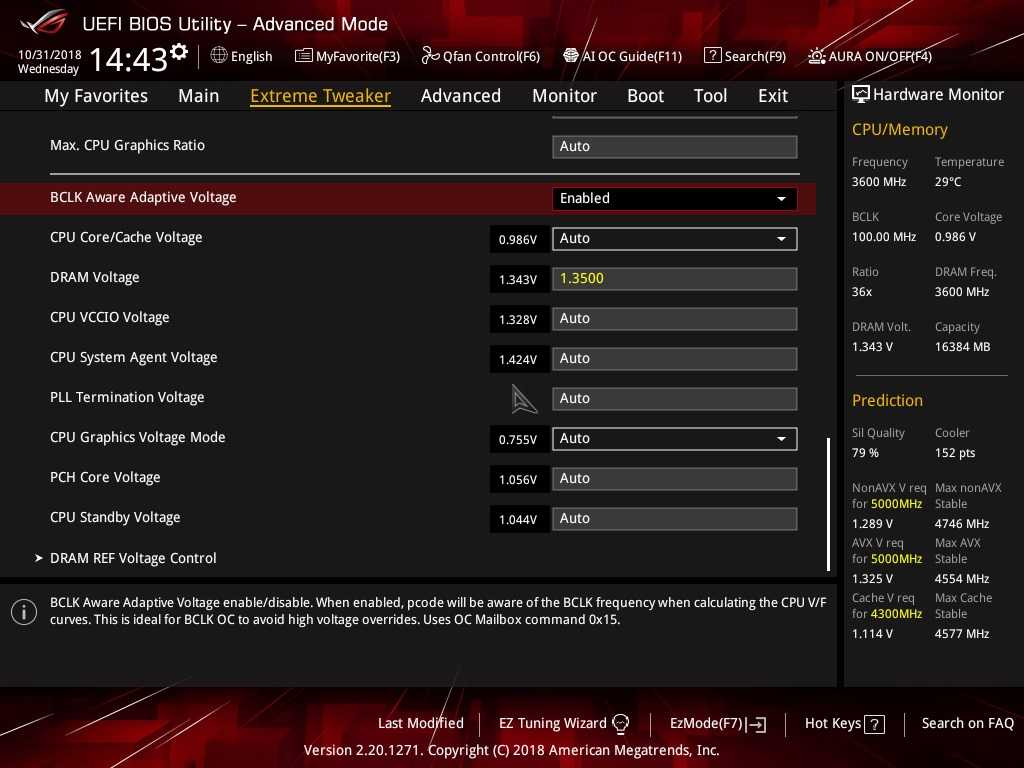 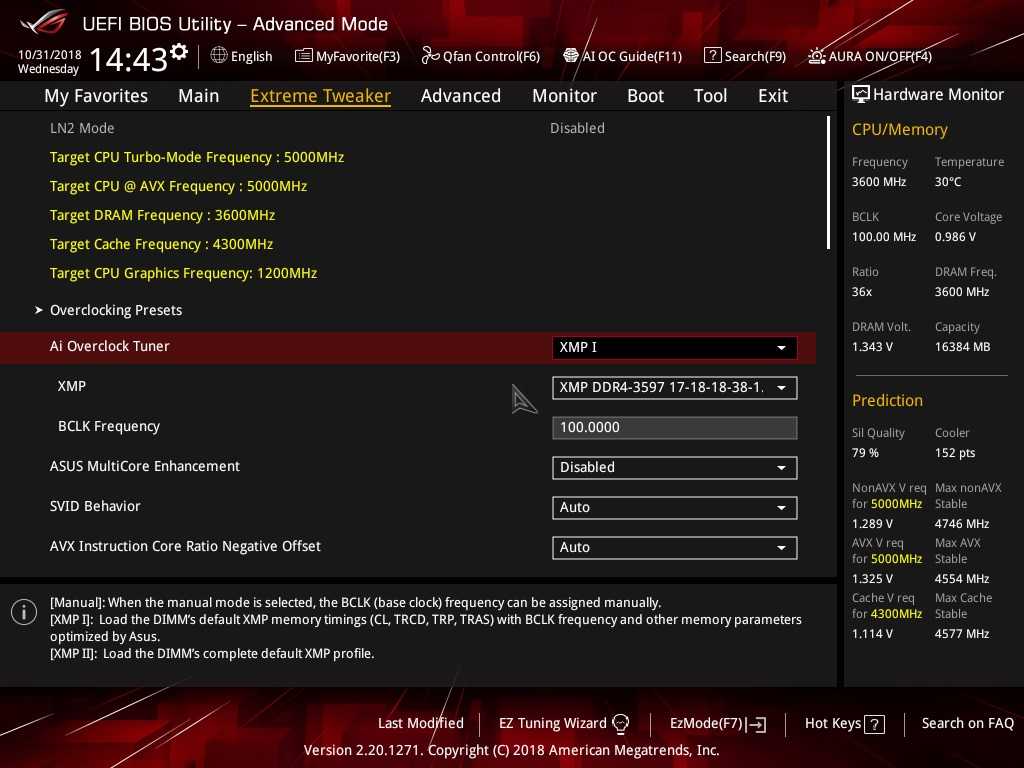 The processor was defined in two different settings in which we measured its power consumption to draw conclusions about the ability of the motherboard to handle different situations.

One situation is a default default, something that each table Z390 It should and should be dealt with. Memory is defined in 3600Mhz built-in XMP profile.

In our default settings when CPU effort consumes 110W. The voltage stabilizer diode reported a working temperature of only 45 ° C. This is a cool and funny temperature given that 125 is a stabilizing shutdown point.

The challenging settings (well… at least for standard Z370 \ Z390 boards) included setting up the 5Ghz processor with voltage Core Of 1.296V. In this mode the power consumption increases significantly and reaches 190W.

It was a long time since a CPU for our mainstream resident showed almost 200W power consumption. In this mode the temperature diode of the voltage stabilizers reported at 58 ° C. Again, this is such a high efficiency of the power system that this motherboard does not create a challenge for users who are going to use standard enclosures. I've seen Z370 boards ripped to pieces even with 6 processors cores and voltage stabilizers that climbed over the 100 ° C line.

You can go far enough and call it a waste of money and resources if the program is in the Maximus XI Extreme side by side Cooling Air or water standard. This motherboard is thirsty at least for dry ice in competitive overclocking. The feeling of making overclocking used this motherboard with Cooling Water is similar to the feeling that you will get in traffic in Ayalon using a Lamborghini, it is simply ridiculous.

Who is the Maximus XI Extreme?

My answer is quite simple - especially for the crazy and overclockers who are not willing to compromise on less than the best that Asus has to offer. Many overclockers working for many years with a particular brand are familiar with the small nuances that can be found in the BIOS and hardware. Anyone who worked in the previous generation with the Maximus board will probably continue to work with another Maximus board.

These motherboards have become routine at the top end of the computer and uberclukers, and we expect them every year as we expect winter rains. Every year we are happy to know that Asus continues to improve its products and progress, and do not see any special or critical problems at all.

At a price of about NIS 2,300, the Maximus XI Extreme is not Motherboard To the average gamer or even to the workstation, but only to those who have liquid nitrogen flowing in their arteries, those who are not willing to compromise on The fast At no cost and under no circumstances. There is one such generation, and there is a reason for it.

As a great luxury car can also be used for regular journeys this motherboard can also be used in everyday life with quite human qualities. LED lightingRGB The controlled adds to the elegant look, anchoring the M.2 drives is a welcome addition and the rear ports are the richest and richest you will find today.

Performance The fast And unusual electricity

Such a motherboard can not, of course, come out empty-handed, and sets a gilded standard for performance The fast For LGA1151 processors. The slew of advanced connections, the auxiliary switches to the crazy overclocker and the spent boss are what makes this motherboard a favorite for exotic hardware enthusiasts.

The electricity supply system does not care what you do to the processor, Network The security is so great that the bottleneck lies only in your ability to cool the processor.