We took the new standard of Asus Go to trial round LGA2066 - is it big enough to justify a new generation for the same resident?

LGA2066 chassis Intel Today is the third round of its processors, after we recently saw the launch of the processor series core-X 10000 which is a refresher for the series core-X 9000 ... which is refreshed tocore-X 7000 of 2017.

New motherboards for the same bracket and chipset - what's the story?

Exhibition Computex 2017 - Motherboard makers prepare new series of motherboards to launch a new Extreme Laptop, these LGA2066s are designed for processors such as the Core i7 7820X 8 core and 7 Core Core i7900 10X, which is mainly an increase in frequency and performance with the 10 core processor Who ruled to the side Intel, core i7 6950X.

With samples prepared for the conference and production lines running in the background, motherboard makers are familiar with the challenge of dealing with a 10-core processor, this time with slightly increased power consumption but nothing to worry about, engineering mostly there.

Although, in a surprising and somewhat stressful step for engineers from these motherboard manufacturers, Intel decided that it must create a new brand and use silicon samples it uses in the server world because AMD Announces its own Esther resident and she brings 16 cores to the table.

Quick brand was born core i9, so fast that samples core i7 7900X and no core i9 The 7900X is everything that the manufacturers of motherboards and even test and media bodies (including our processor) knew core i7 7900X). By the time these motherboards reached the shelves, they had already included bios that support 12-18-core processors under the new brand and especially increased power consumption.

As a result of this series of events, a problematic situation was created in which high-core processors caused an unpleasant load for the residual power supply systems, and the high operating temperature resulted in an inevitable performance decline for processors in many situations, Here is an item we wrote at the time on the subject.

With no choice, motherboard makers had to respond to the issue, and upgrade the hardware so that they could cope with those high-core processors they weren't expecting when working on the first generation of X299. The small heat sinks for the voltage stabilizers, and the amount of stabilizers themselves, required a significant change. A 12V input voltage conversion process that the processor requires is a process that emits heat and requires controllers to do it, there's no escape. In some cases, even upgrading the power connectors themselves to the bracket is a simple constraint due to the unusually high power consumption of the bracket processors.

Upgrading Required - X299-A II is ready for the mission 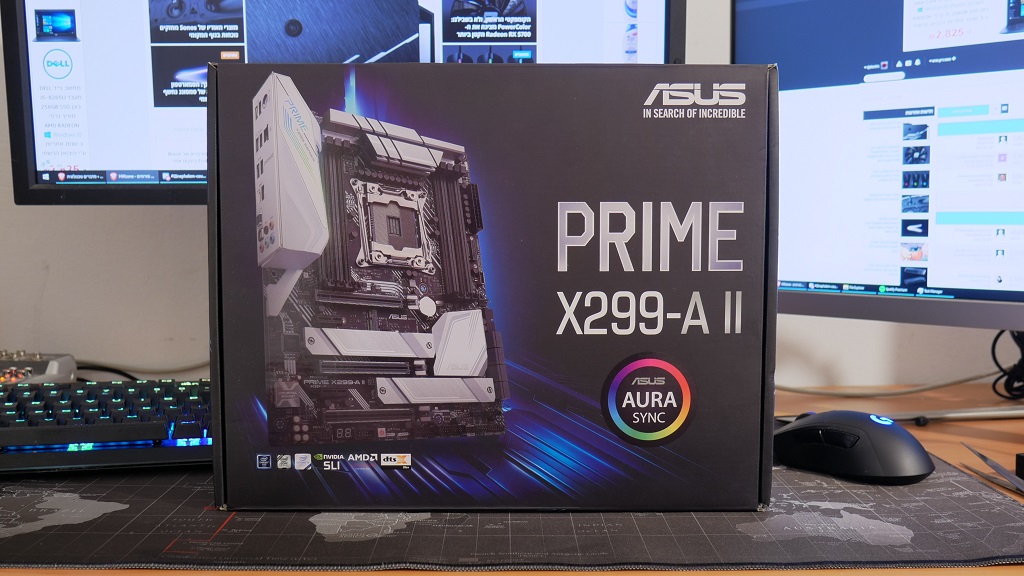 The X299-A II belongs to the Asus Prime series, and it is its most standard series for the LGA2066's Intel. Things that characterize the series are mainly a white neutral color scheme and a minimum amount of relative features without special elements of controller integration Network Such and others or excess quantities of RGB. 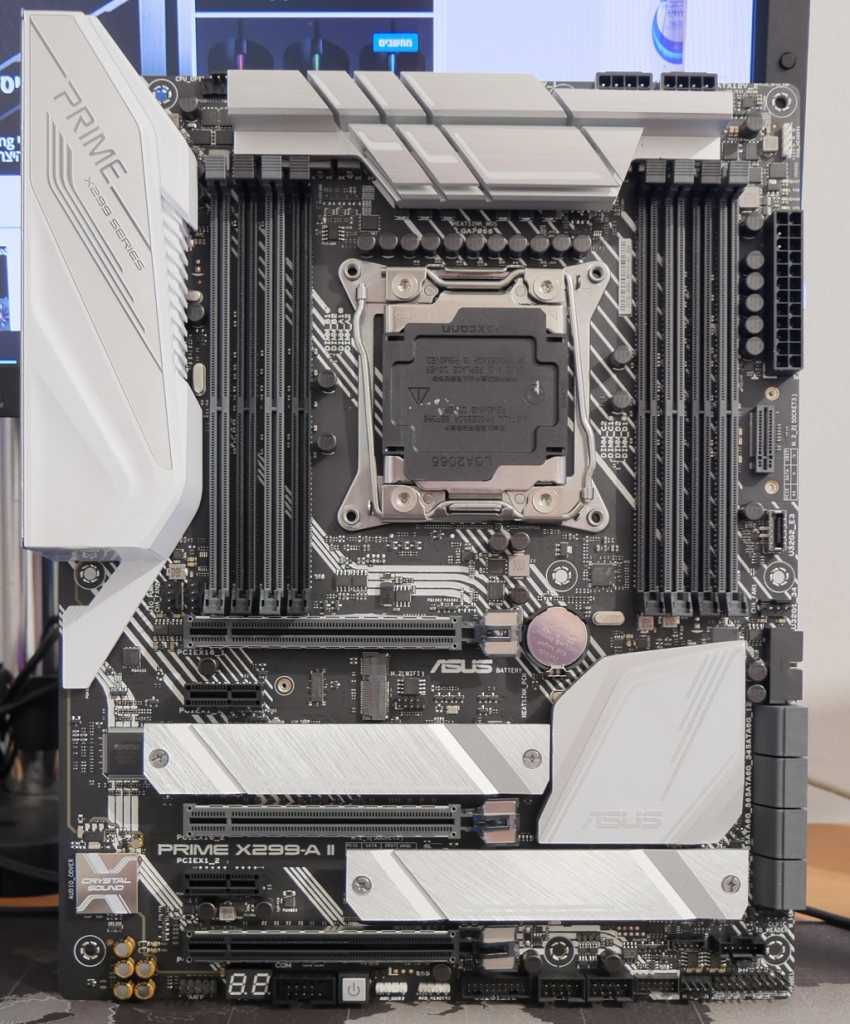 I think it is very easy to tell the difference between the first and second versions. Asus Did what was requested and significantly inflated the ability to handle particularly high power supply to the bracket. The vast majority of interfaces and connections that the first version contained here, but a few more were added. For example, there is an interface that allows installation of device \ WiFi below the interfacePCI-Express Top x16. Also, from a maximum of 2 M.2 drives we have increased to three in the new version. 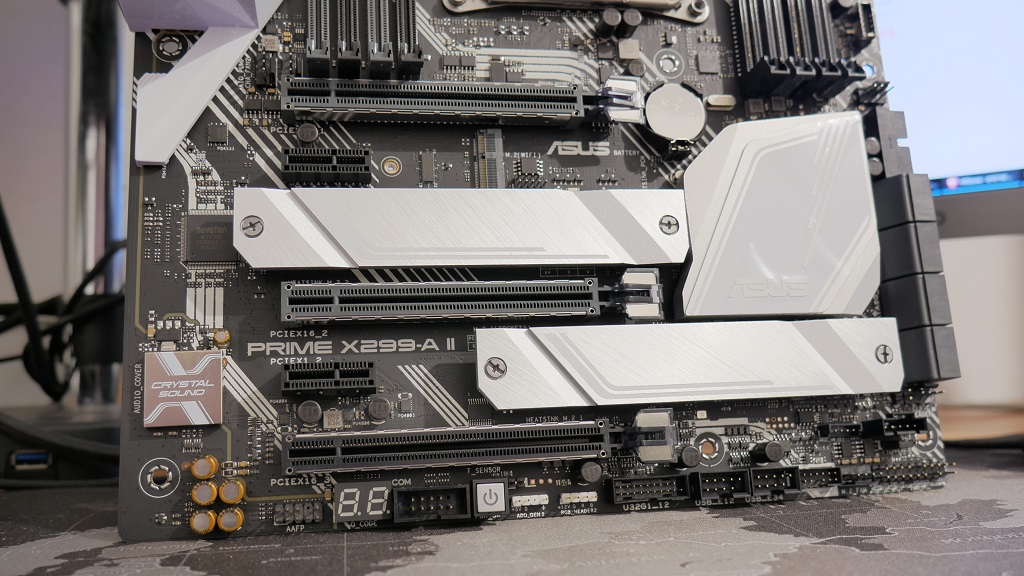 The bottom of the motherboard is completely resolved from RGB elements that were in it and instead of one hard disk that needs to be disassembled instead of mounting a drive SSD, There are two bodies here Cooling Easily removable for installation and include a thermal pad that adheres to them to transfer heat from the drives. The same built-in sound card that we knew is also here and is the Realtek S1220A along with Crystal Sound's technology Asus. 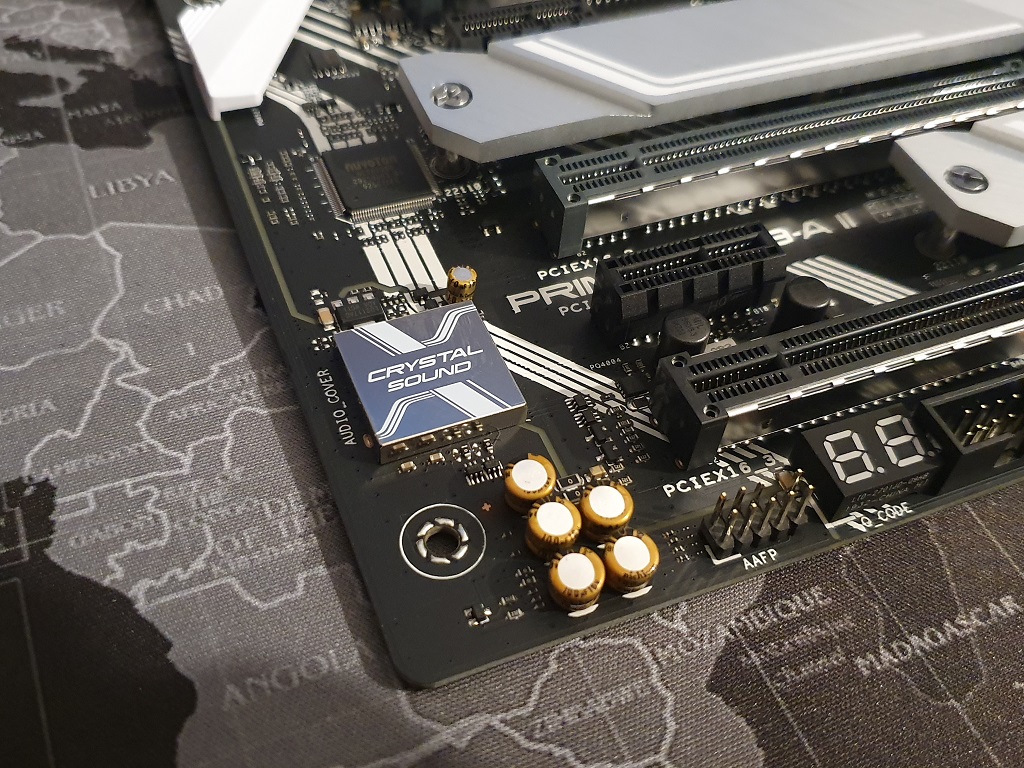 This square "can" that you see on the Realtek sound controller is primarily designed to protect against electromagnetic noise from the environment. The built-in sound card area dedicated to the motherboard is relatively small and apart from the chip and the number of capacitors there is not much. Still, we've come to an age where at least built-in sound card audio provides a great job for the vast majority of users. Those who are interested in higher quality sound can always throw a few tens of dollars aside for a digital-to-analog converter (DAC) to be used as an external sound card.

On the right side of the motherboard you can see the same interfaces that have been consuming us in Assos since the launch of the bracket. You can connect up to 8 SATA drives, there are connectors USB 3.0 andUSB 3.1 Gen2 along with an interesting way to dock M.2 drive - vertically (in the packing you get a supporting column). The 24-pin connector that gives power to the motherboard in its standard position sits. 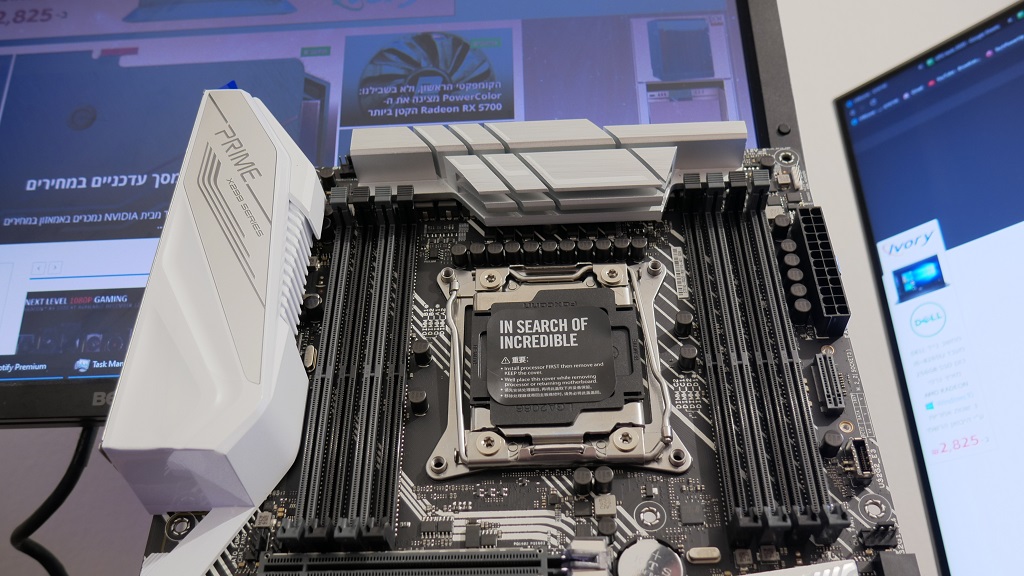 Suitable for an Extreme, this motherboard contains 8 memory interfaces up to a maximum of 256GB, as single sticks of memory can now be purchased DDR4 32GB. Supported memory speeds will depend mainly on the processor, but there should be no problem using 3600 Mhz in four channels with Processors From the last two generations to a resident, 9000 and 10000. With 7000 generation you may have to The fast The memory controller is easy to process by increasing the input voltage to the controller.

At the back end level of the motherboard, there really is nothing particularly unusual here. Still, the X299-A II symbolizes the simplicity between the new Asus motherboard and the bracket. There are 8 USB interfaces (including Type-C) with two at 10Gbps, four at 5Gbps and two (in black) at 2.5Gbps. There is a button that resets the gossip with The fast You fail or you just want to reset settings as well as sound ports from the built-in card. This motherboard's network interface is based on the Intel i219V 1Gbps speed controller. The PS / 2 interface for the keyboard and mouse is in my opinion at a point that you can completely forget about and use the area it occupies for two ports USB More. 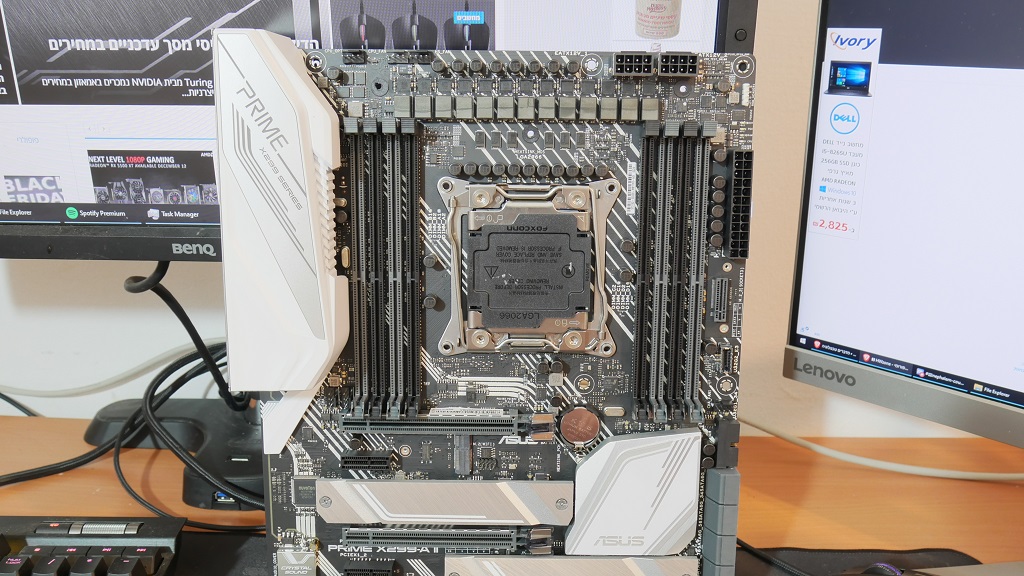 To me, the diamond in the crown for this motherboard is the most significant improvement in the power supply system for the bracket compared to the first generation of motherboards. We moved from the cave 7 Stages of IR3555 stabilizers for the owner system 13 Stages of the same stabilizers (85% increase), and from the body Cooling A tiny, unpopular, one-size-fits-all area. The power outlets have also been upgraded from one of 8PIN and one of 4PIN to an upgraded two of 8PIN with a 25% higher current capacity.

The heat sink that comes with this motherboard for voltage stabilizers is not as large as the interior space that an aluminum fan can provide, it is heavyweight and can carry a very serious amount of heat. 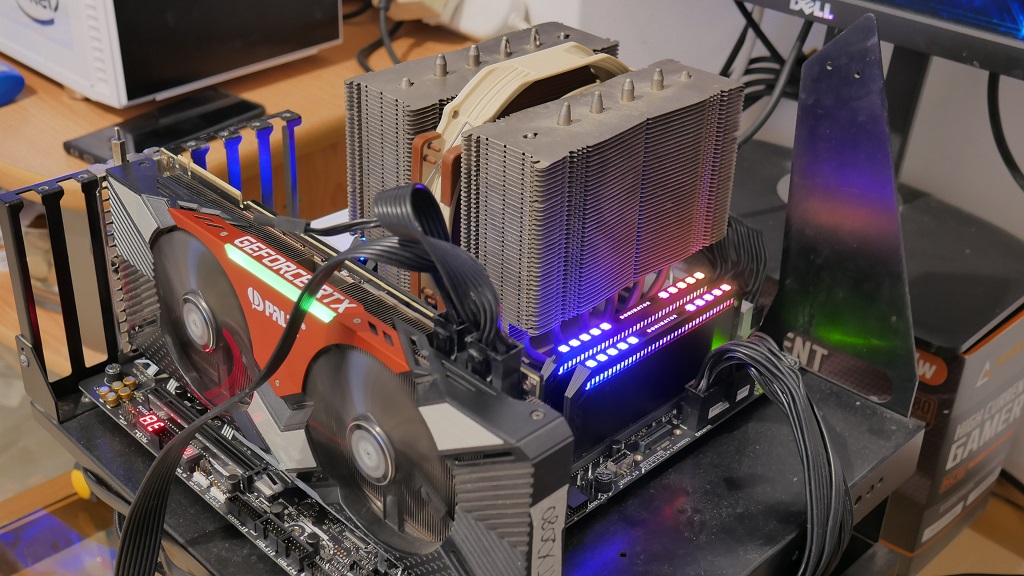 Of course, we tested this ability. Used CPU core The 9-core i7960 16X has tuned the processor bracket to receive a constant power of 400W. This is a significantly higher power than that of core i9 10980XE before The fast. For three consecutive hours, 400W entered the processor bracket while temperature checking the various components. 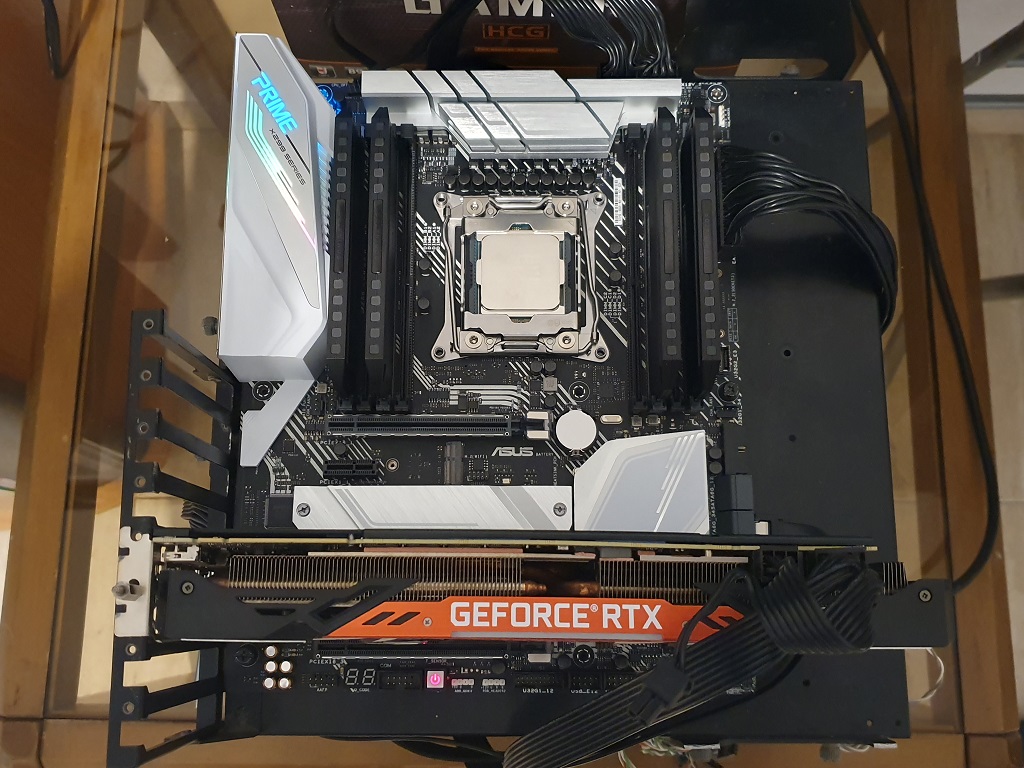 The heat sink did not make an eyelid during the tests. With a room temperature of 21 ° C, the cooling area only stayed at 46 ° C. The highest voltage stabilizers temperature measured at the exam is only 62 degrees Celsius - extremely impressive. These are components that are set to work properly at temperatures up to 105 degrees Celsius.

This is not an Extreme board, so in our opinion, using significantly higher power somewhat misses the purpose of the X299-A II. All the same, we did get to where we turned 500W power into the bracket. In this situation the heat sink temperature reached only 51 degrees, the voltage stabilizers reached 70 degrees Celsius. All this - without having airflow to the heat sink Motherboard, Unlike in an enclosure situation for example. Not bad at all.

Although RGB elements have disappeared from the chipset area, plastic covers that exist on the rear ports still provide little visual taste to this motherboard. This lighting can be controlled by software ASUS Aura. Of course you support components RGB It is part of the software-controlled matter. There are my authors RGB The motherboard to which such and other LEDs can be connected.

Intel assigns an important mission to Asus and Asus seems to be able to meet it with great success - when it comes to build quality and functions, at least as a board if considered Asus' "most basic", it does an outstanding job in the overclocking and dealing department Processors Especially hungry.

At about $ 350, it's important to note that being a tail lion also has its own price. It's still a motherboard that costs more than standard motherboards for residencies like LGA1151 or AM4 and doesn't always contain more interfaces. Most of the cost comes from the support of Extreme Processors. There is not a huge amount of USB interfaces or advanced and fast connectivity here Thunderbolt 3. 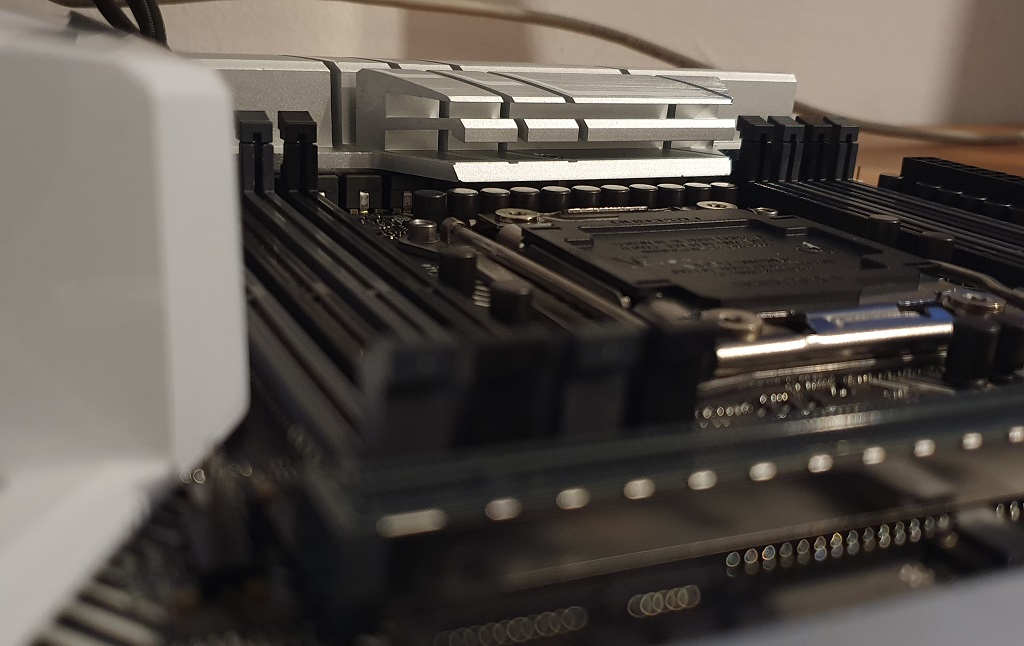 What's more is the amount of high-speed PCI-Express interfaces depending on the capacity of the processor in the bracket, and support for extremely high memory capacity thanks to eight interfaces DDR4.

Aesthetically, I find no problems with this motherboard at all. The neutral color scheme plays in favor of Asus. The array of PCI-Express interfaces is arranged correctly to allow the installation of three large cards. My big complaint for Motherboard Such is that more USB rear ports will definitely contribute. After all, this is a product for advanced users who may have used a lot of equipment to connect to a computer. My motherboards with 4 rear USB 2.0 ports receive an extra score just for being able to eat a keyboard + mouse + external sound card without using high-speed interfaces for the device storage.

If anyone for some reason needs to Motherboard The LGA2066 resident has no special requirements that this motherboard cannot fulfill - we would highly recommend it. He passed our effort tests at ease. At $ 350, it is considered to be the cheapest available for the residency, which is definitely a positive thing.


Wait, there's more!
Join To the group of zon And you can receive exclusive updates on various offers on the net, share content that you find interesting, consult with members of the site, and more - Join now!
Tags
ASUS X299
Share
Facebook Twitter LinkedIn WhatsApp Telegram