In this critique, we will become familiar with one of the mother's interesting motherboards AM4 And who, in our opinion, is the ultimate choice for the quickest

The first of the series of motherboards reviews of the X570 chip set from us is the Crosshair VIII Hero's Asus, Specifically in its WiFi version. This is a very high quality motherboard at a price that makes you think twice before investing in more expensive motherboards.

The ASOG tradition of ROGs in motherboards for residency AMD It is not as big and luxurious as the one they have in their seats Intel, But since the launch of processors RYZEN The company works on every launch and also displays panels ROG Respectable and well-stocked. Demand leads to supply, eventually.

Crosshair is its parallel branding to Maximus,AMD Compared. These are motherboards that usually start from the 250 line and above AMD, This time due to the X570 platform and its surface price, the average price compared to X470 is slightly higher in exchange for PCI-Express 4.0 as standard with processors RYZEN 3000. In addition, the average construction quality of motherboards is improving compared to the previous generation. 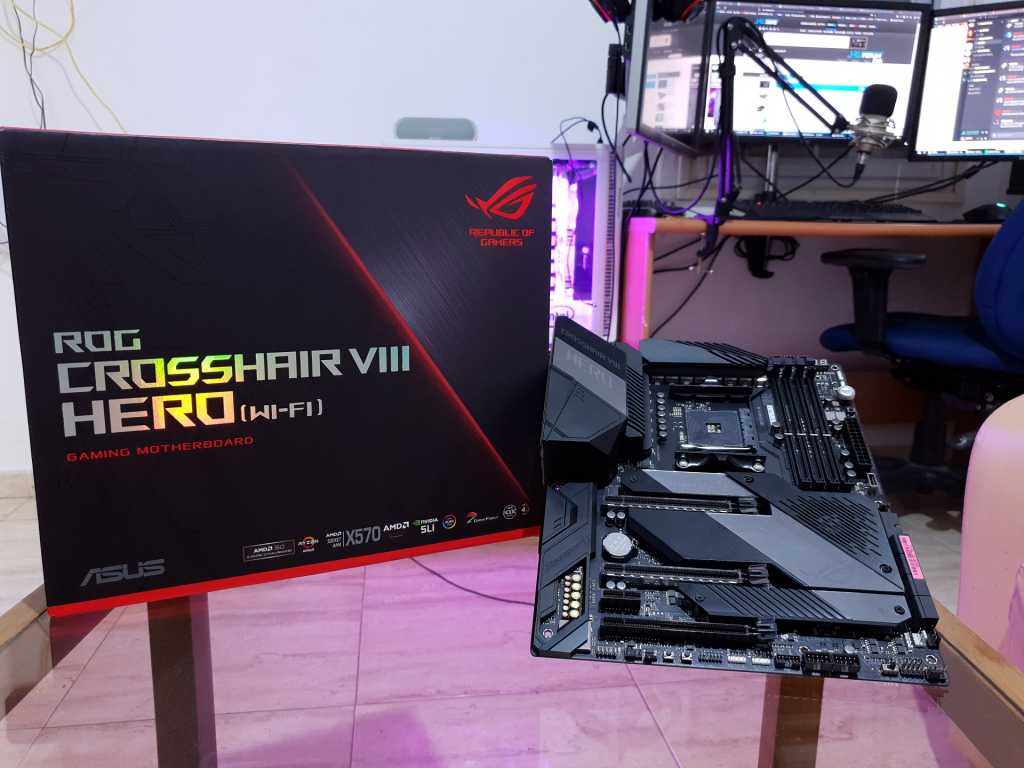 The price of this motherboard in the market is 380 for the WiFi version and 350 for the standard version, and it is believed or not that the price is quite high when it comes to the X570 boards, since the various manufacturers made even models that cost 500 and 700 dollars this time. Yes, Motherboard The cost of 700 dollars from each manufacturer to a completely standard chassis.

The same WiFi on which 30 is paid is the first integration of 6ax Intel 802.11 technology at 2.4ax speed up to 5.0Gbps, along with WiFi comes the Bluetooth 570 controller. Yes, the first time of Intel's new WiFi technology in the desktop market is none other than XXNUMX's platform AMD. 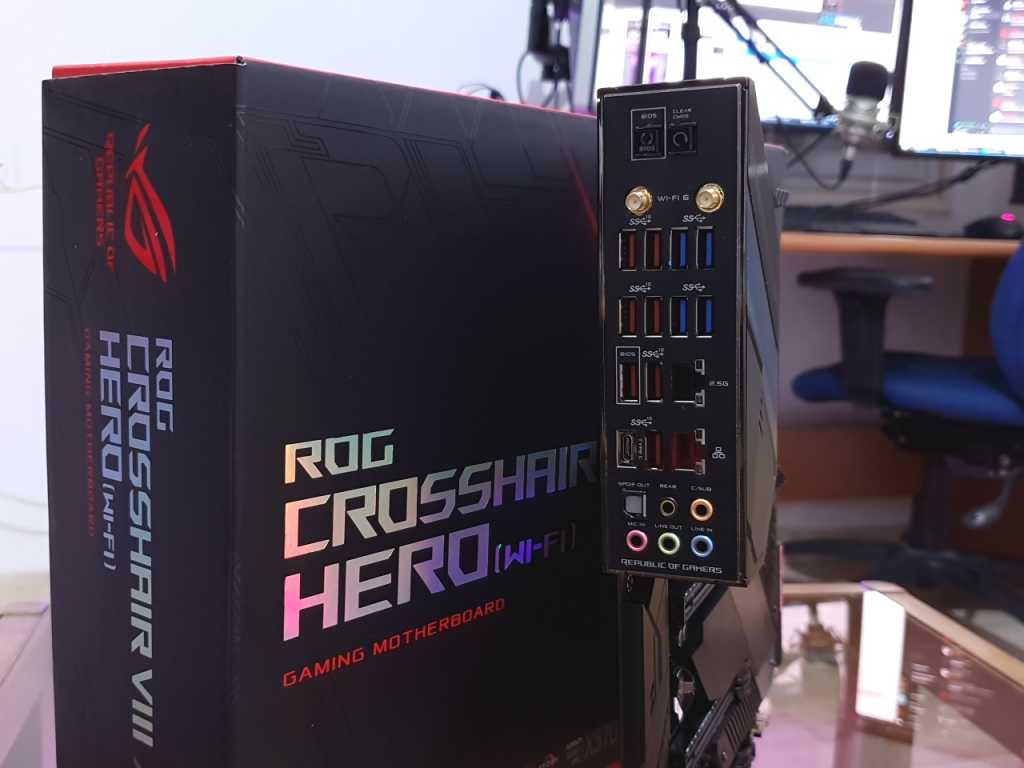 When it comes to rear ports, there's a good container. There is a USB 3.0 standard alongside USB 3.1 Gen2 fast thanks to the platform capabilities, and also two wired network ports at the speed of 1Gbps and 2.5Gbps from Intel And Realtek respectively. The golden dots are designed to screw the antenna that comes with the motherboard. 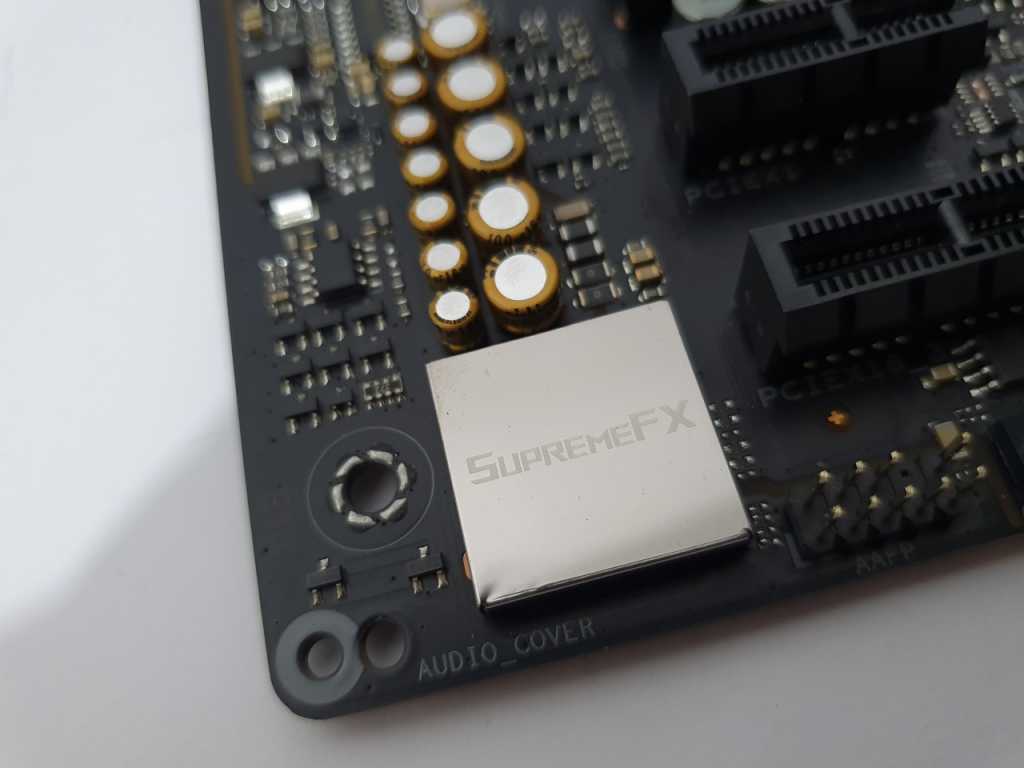 The channel 7.1 audio comes from this part of the panel, which includes the chip Realtek's friendly ALC1220S has been used by various technologies such as the ESS ES9023P amplifier for high-resistance headphones and other advanced material and program controllers. As far as quality is concerned, the 1220S proves that it is worth investing in advanced features alongside it in producing great sound quality for the average user. 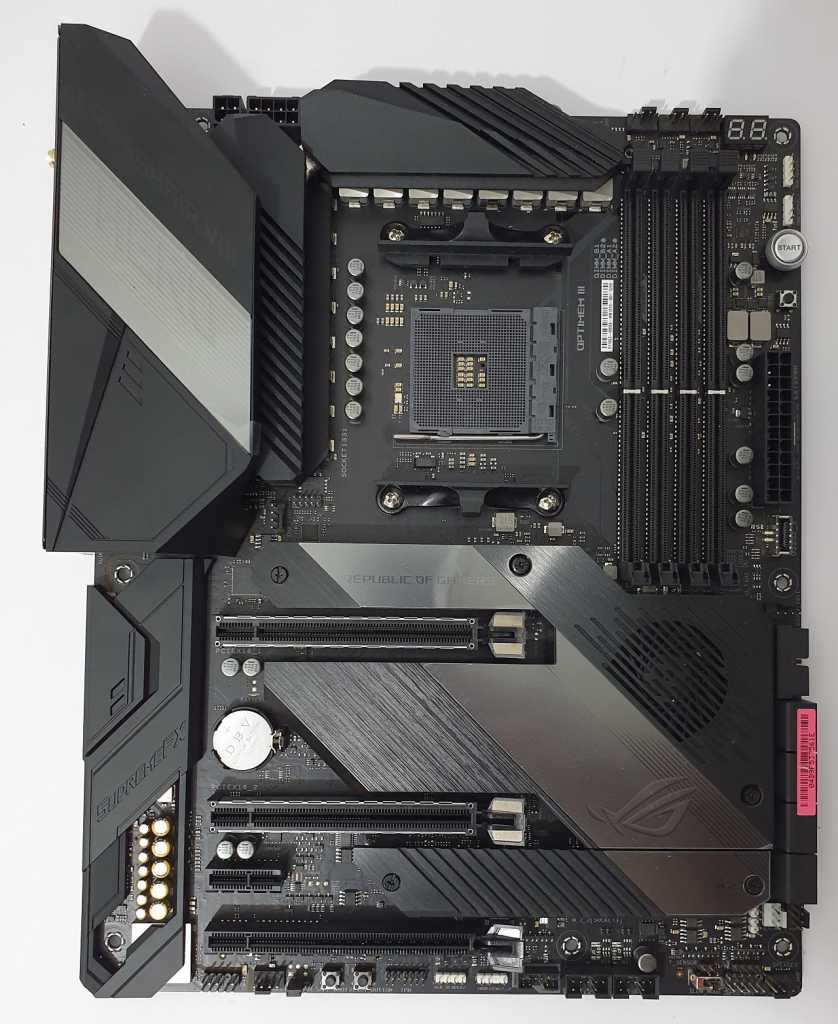 This is what the Crosshair VIII Hero WiFi looks like in our interrogation room photo. The array of interfacesPCI-Express It is especially suited to dance around the massive heat sink that the chipset and the M.2 drives have when a large video card occupies the upper interface, and additional cards expand the lower three. They could add another PCIE X1 interface if being petty, but I do not think there is a need for more than 3 expansion interfaces that exist beyond that of the graphics card. 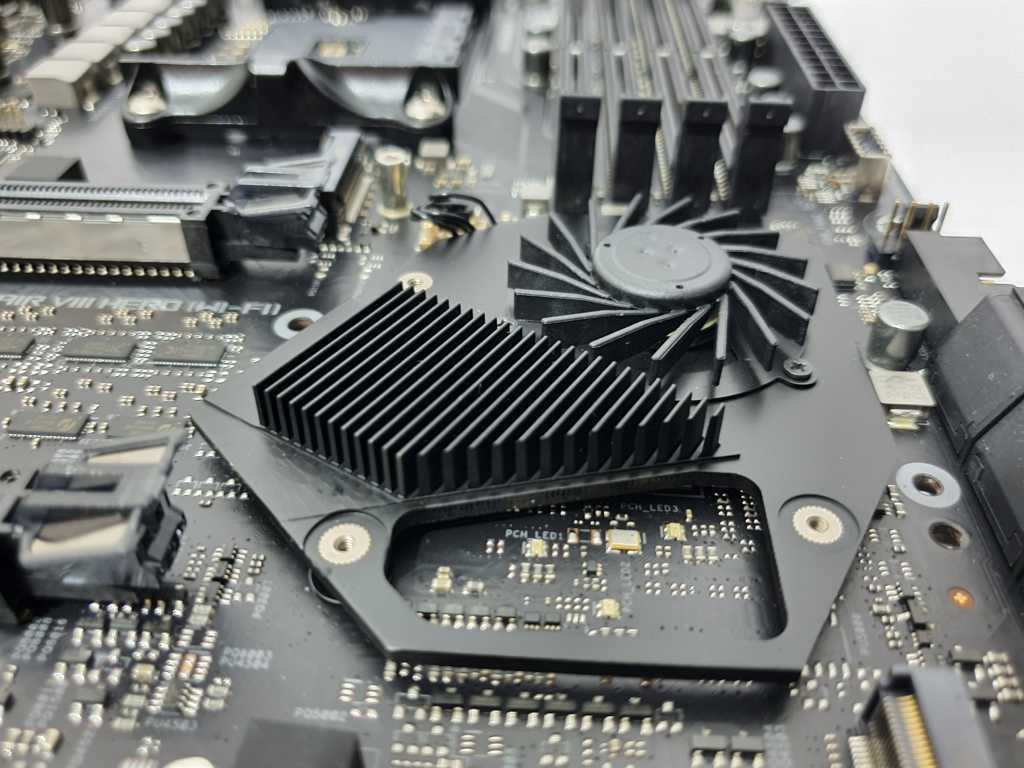 If you remove the entire shell, you can see the heat sink that is actually cooling the chipset. X570 is chip Which is very similar to the IO component of the Ryzen 3000 processors themselves, the demand for traffic is quite similar. It is rated for maximum power consumption of 15 watts, and for this purpose it was decided to combine body Cooling Along with a blower-style fan to ensure that there is no overheating. 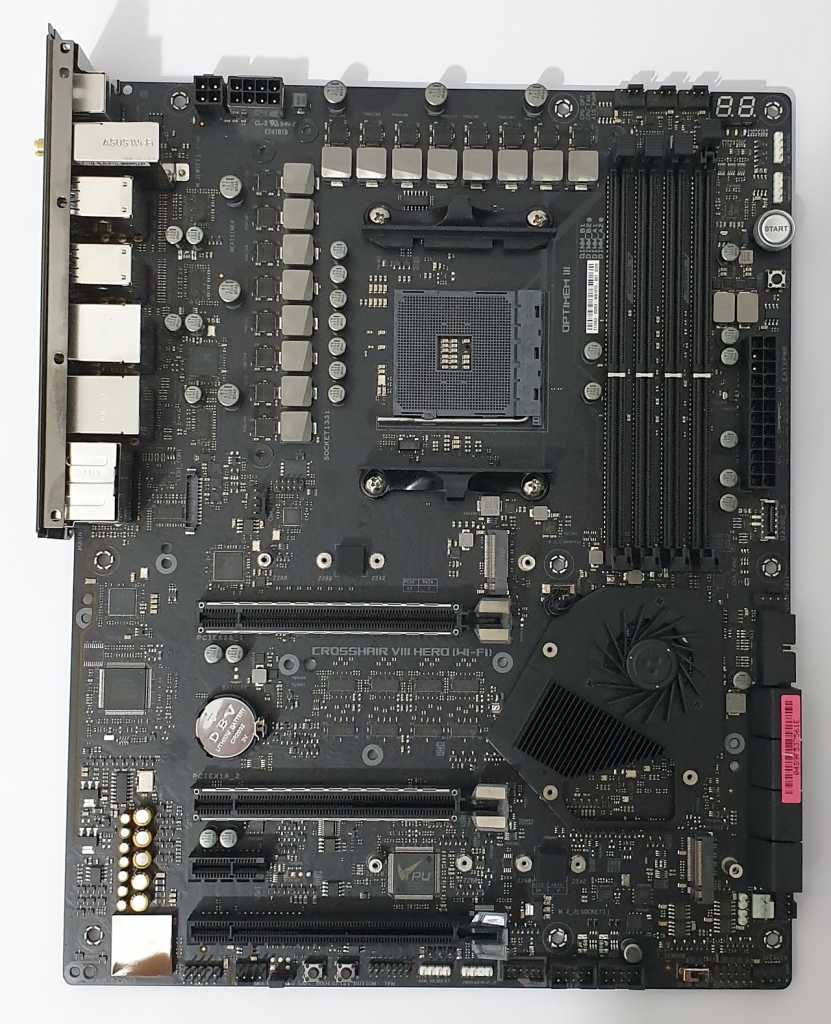 This is how the board looks when you remove the plastic and a large part of the cooling elements. Although some motherboard manufacturers have decided to include three M.2 interfaces here Asus Unfortunately I have only two. I do not find a big disadvantage in this, however, for the ambitious user who is still likely to purchase SATA drives.

This motherboard has eight 4PIN connectors for fans and all are programmatically controlled in BIOS and other software through the operating system. As a result, there is no real need for a ventilated controller in the chassis, allowing everything to be attached to the board. 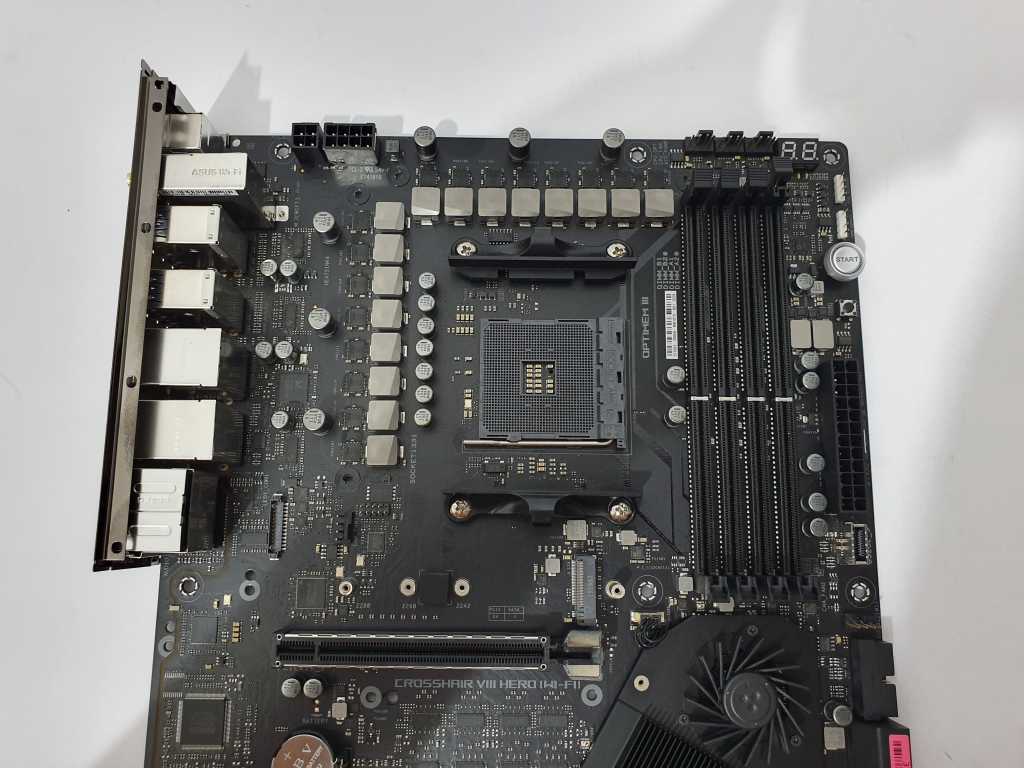 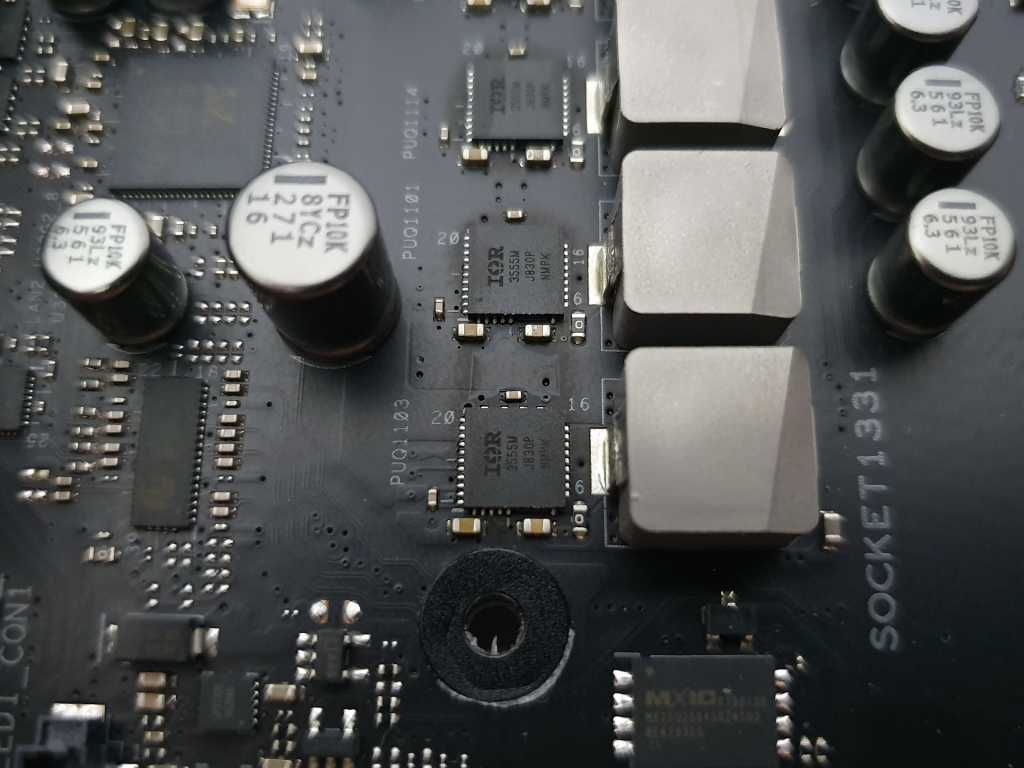 The steps contain Infineon's IR3555M voltage stabilizers (now the owners of International Rectifier) ​​and have maximum current capacity of 60A each. Using such 14 guarantees full immunity from power failure to a compound interest rate, even when the Ryzen 9 3950X, chip Having 16 cores to launch in September will be able to Cooling Exotic get to a third of it. 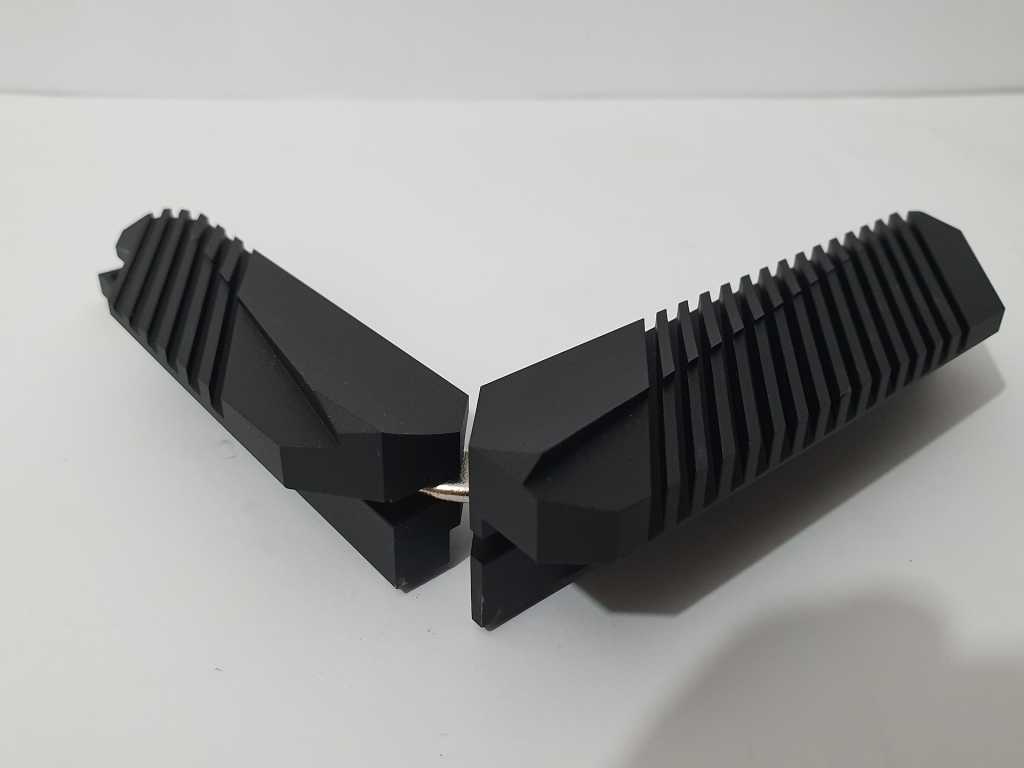 About Cooling Of the same headquarters system Asus This two-piece heat sink and aluminum tube are coated with aluminum between them. This coolant has a fairly reasonable surface area. This is not the best quality heat sink on the platform X570 Motherboards, but it is easily expected to deliver the goods thanks to the effective heat dissipation of the stabilizers which is a refrigerator. 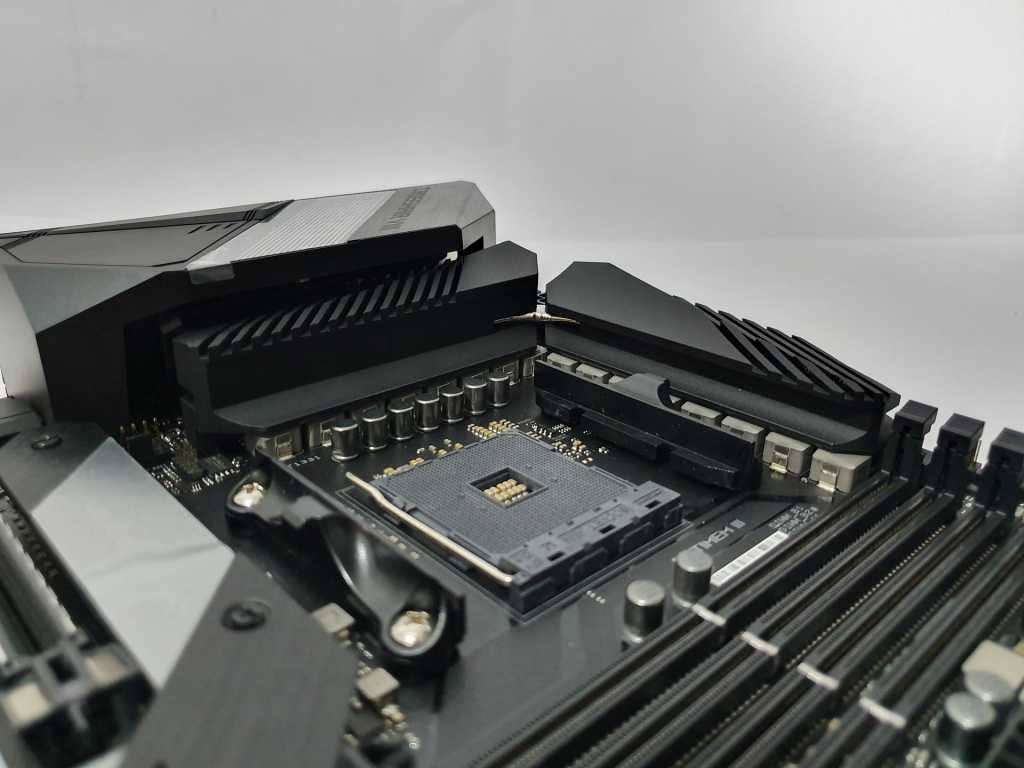 When it comes to the system that is responsible for overclocking and dealing with electricity entering the chassis, I think Assus did an extraordinary job. It could have chosen a smaller system but, as Crosshair VII dictated in the previous generation, the importance of such a system leads to sales and satisfied customers.

The clipboard also has tools, so you will find on this motherboard accessories such as the Slow_Mode mode that lowers the frequency to the minimum possible when The fast To perform such operations and responsibilities under very low power consumption, and buttons such as the safe boot that enters Bussus under default settings without deleting settings you have already set, or Retry to try The fast Without performing an automatic reset after a few attempts. There is also a liquid nitrogen jumper, and is designed for extreme acceleration with very high voltages to the processor, over 1.7 volts. 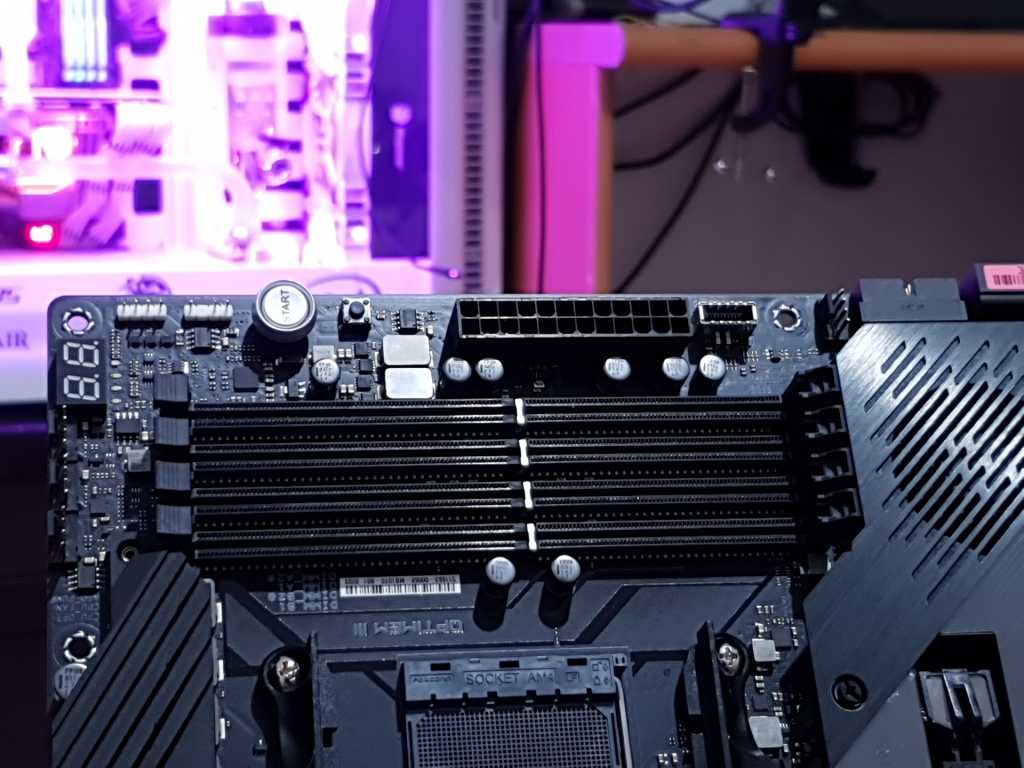 As I mentioned earlier in the review earlier this month, there are other tools I find myself using regularly such as the power button and the LCD monitor which at any time displays the status of the system and alerts you when there are malfunctions. These are very useful tools for the advanced user. 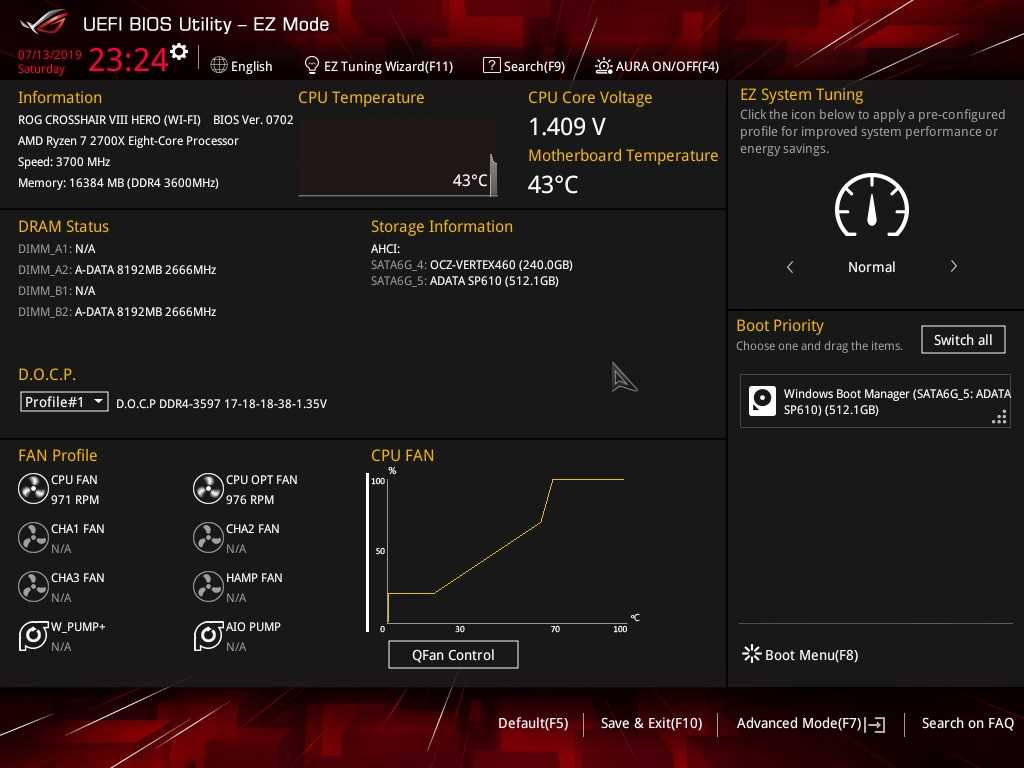 Asus' graphical bios for my personal taste is still the most comfortable I encounter on motherboard today, even when GIGABYTE Has updated its show much more as of Asus.

The main screen contains important information about the system and enables setting the drive order for drives, DOCP profile (equivalent to XMP) for memory, and temperature control. 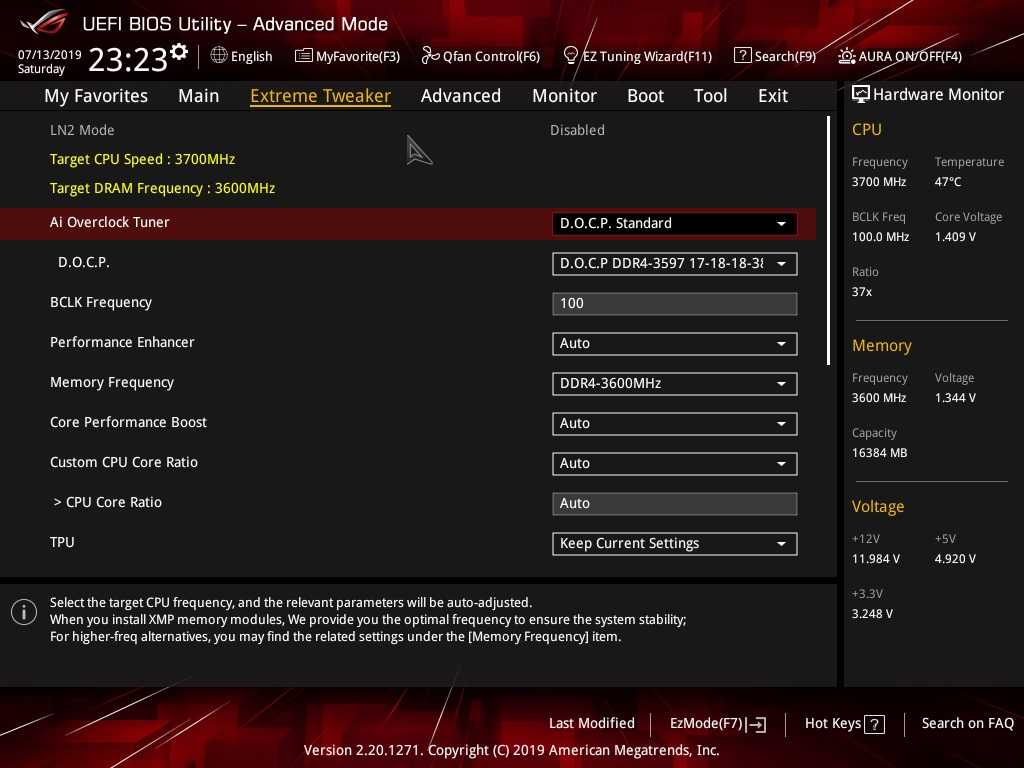 The Extreme Tweaker tab in advanced mode is where all the action happens. Here you set different profiles and memory speeds and perform overclocking. Overclocking to Ryzen's processors is too easy today. Apart from the fact that most of their potential they are already out of the box with Cooling Advanced, just like graphic cards Today, it is possible to activate the PBO (Precision Boost Overdrive) function that gives up to about 200 Mhz above that. 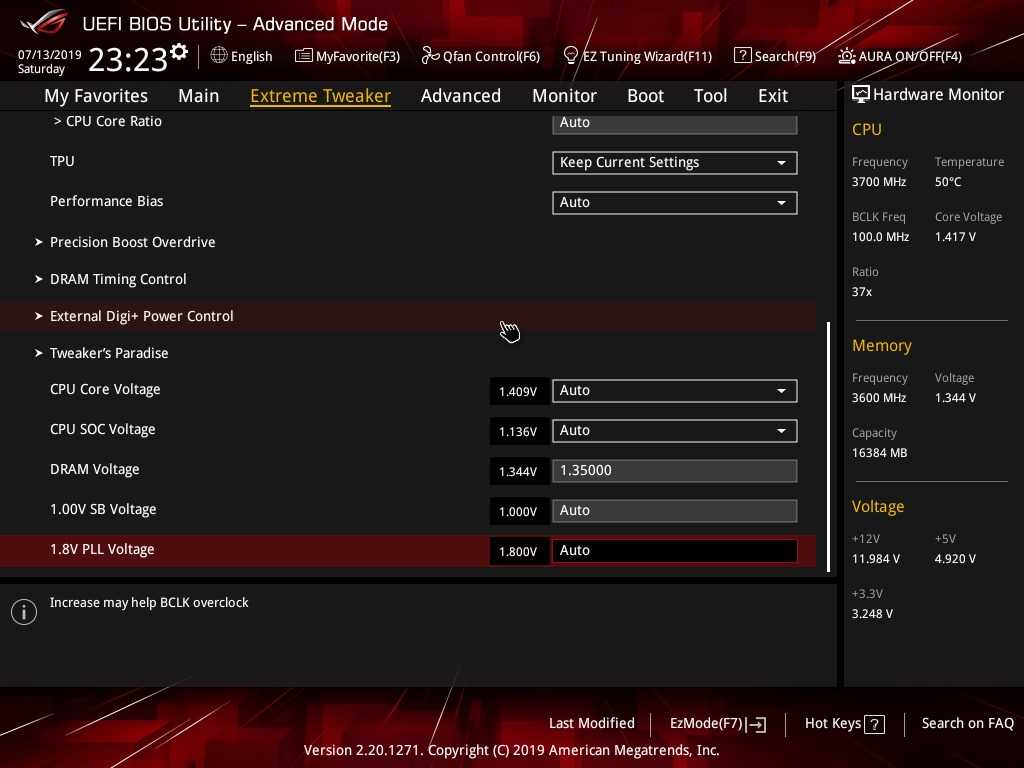 Further down the page you can adjust the voltage to the CPU cores Core Voltage) and the IO controller, also known as SOC Voltage. The memory voltage will remain on the default set by the manufacturer, but can be changed if performed The fast Also to memory.

When it comes to stability זיכרון, The Crosshair VIII Hero is no less than excellent. I have not encountered any malfunction or instability resulting from the limitation that came with the board. The indicator on this motherboard is mostly suitable for using two high-frequency sticks,RYZEN 2000 managed to achieve impressive results. 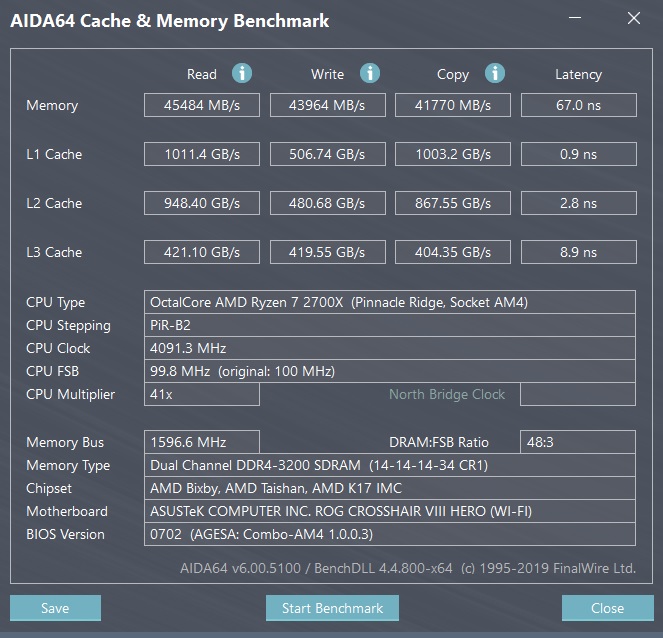 Without effort I turned on 4 sticks זיכרון 3200Mhz quickly on the Ryzen 7 2700X processor of the previous generation, an achievement that absolutely can not be made on any panel that has a configuration זיכרון But only on specific models.

In models Processors Newer ones such as Ryzen 9 3900X executables of those 4 sticks can be made even on the speed of 3733Mhz without any problems at all. The Crosshair VIII Hero has no limit זיכרון Low and freedom of play is great.

To sum things up, I think the Crosshair VIII Hero should be the highest point most users need to invest, even those who plan to take a Ryzen 9 3950X system to the edge with Cooling Custom water. 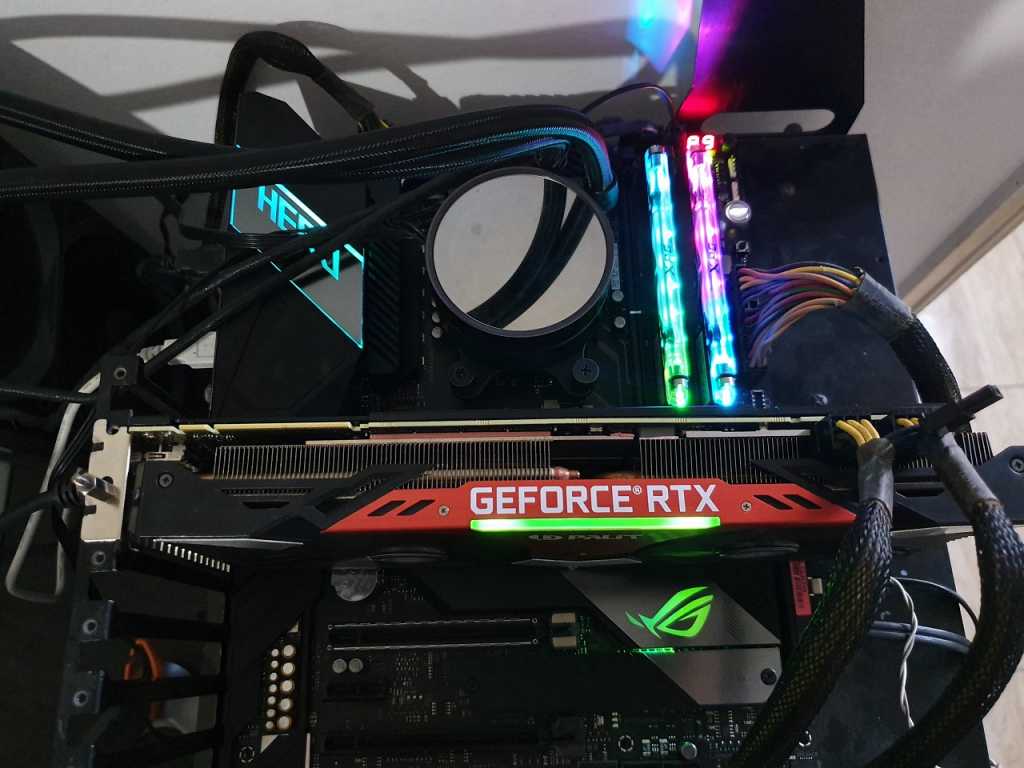 In fact, although I have additional motherboards, I decided to use ASUS 'Crosshair VIII Hero WiFi for exams on the X570 platform of AMD Processors, graphic cards, Memories and what not. I think that's enough about the security of using such a product. While other affiliates suffered birth pains and other problems related to BIOS, the Crosshair VIII Hero behaved perfectly.

I do not know if it is possible at this early stage to crown the Crosshair VIII Hero WiFi as the most useful motherboard on the platform, since almost 400 dollars is not exactly a price accessible to every user, but it also covers the high end market that needs something uncompromising . As mentioned above, motherboards are very expensive, but nothing actually brings a printed board of high quality. The Crosshair VIII Hero WiFi gets our stamp for the use of many aspires and there are also LEDs on-RGB, Of course, an important and critical component of any advanced hardware product.