We took the B510A Gaming Pro's for review MSI, A motherboard that comes to incorporate a wink look with support for Intel's new processors

With the launch of the new Intel This summer, LGA1151 and the new processor series are also sprouting new motherboards designed to meet the needs of users.

The market is divided into two types. One who needs the simplest motherboards (the majority) and the other who wants more than that because of various needs. These are two markets where the motherboards are priced in 280 to NIS 350 and in the second usually north of NIS 600.

What makes cheap motherboards really cheap is the use of simple chipsets and minimal connections. For the task entrusted Intel The H110 and B150 chip sets for this. They supportUSB 3.0 and SATA 3 which is pretty much all that interests them. Only two years ago these connections were not common in the cheapest motherboards and now it has become standard.

The H170 and Z170 chip sets leave Intel in the more serious markets, especially for computer systems used for continuous, resource intensive work. Even when the simple B85 chipset was released in the previous generation of processors, motherboard makers took the task of creating an advanced gamers board based on the budget chipset to have a product that feels prestigious but does not cost 1000. The MSI B85-G43 GAMING Is an example of such a motherboard, and now it is time to meet his successor. 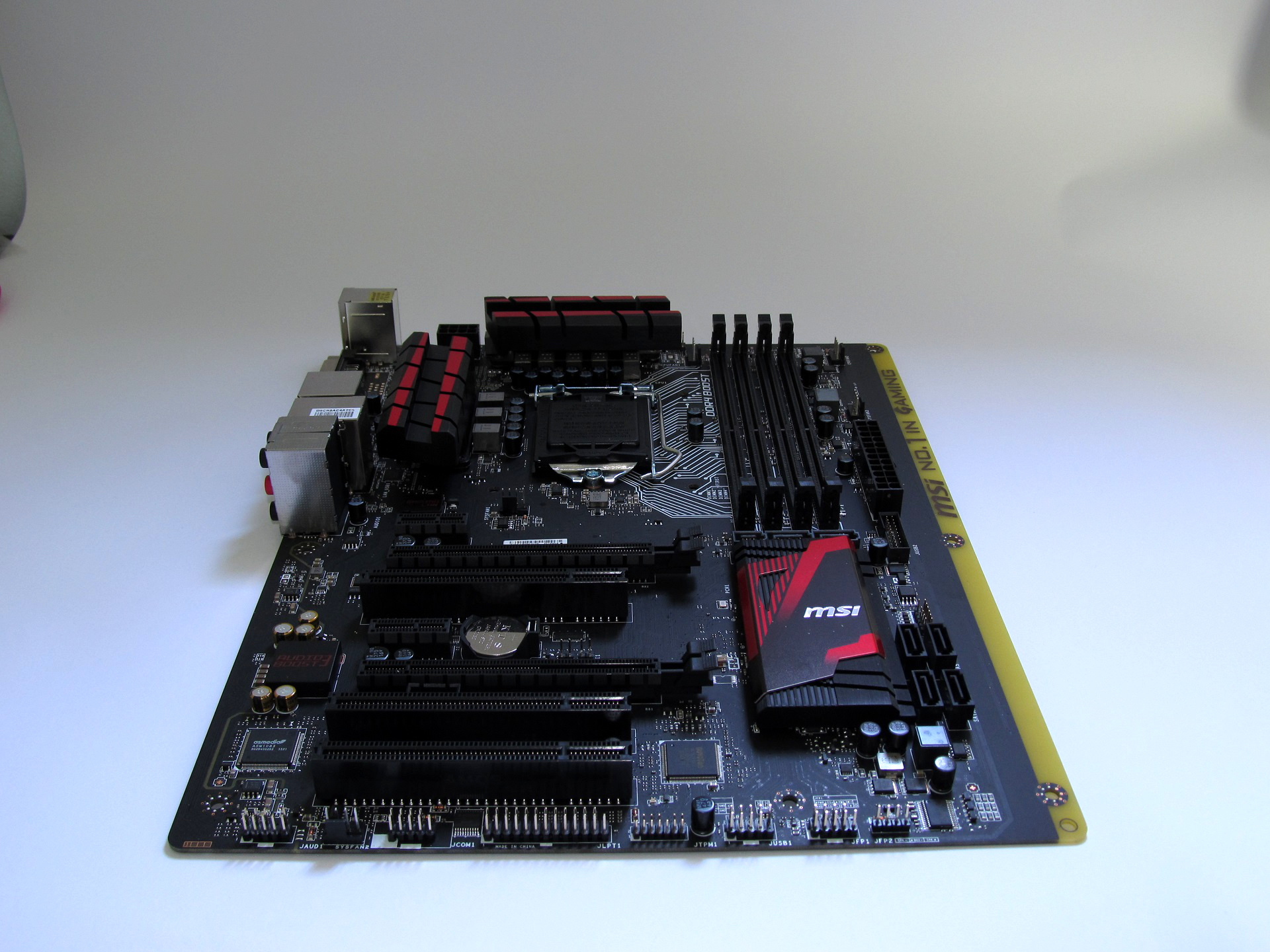 This is the new B150A GAMING PRO. This is a standard ATX motherboard, so it does not fit into very small cases. As befits any MSI gaming board, this motherboard is also painted black and is decorated with black-red cooling devices on the chipset and voltage stabilizers for the processor. It includes support for DDR4 memory up to a volume of 64 gigabytes. The processor chassis is the new LGA1151 and supports the processors Intel In the sixth generation like Core i7 6700K andCore i5 6600K. 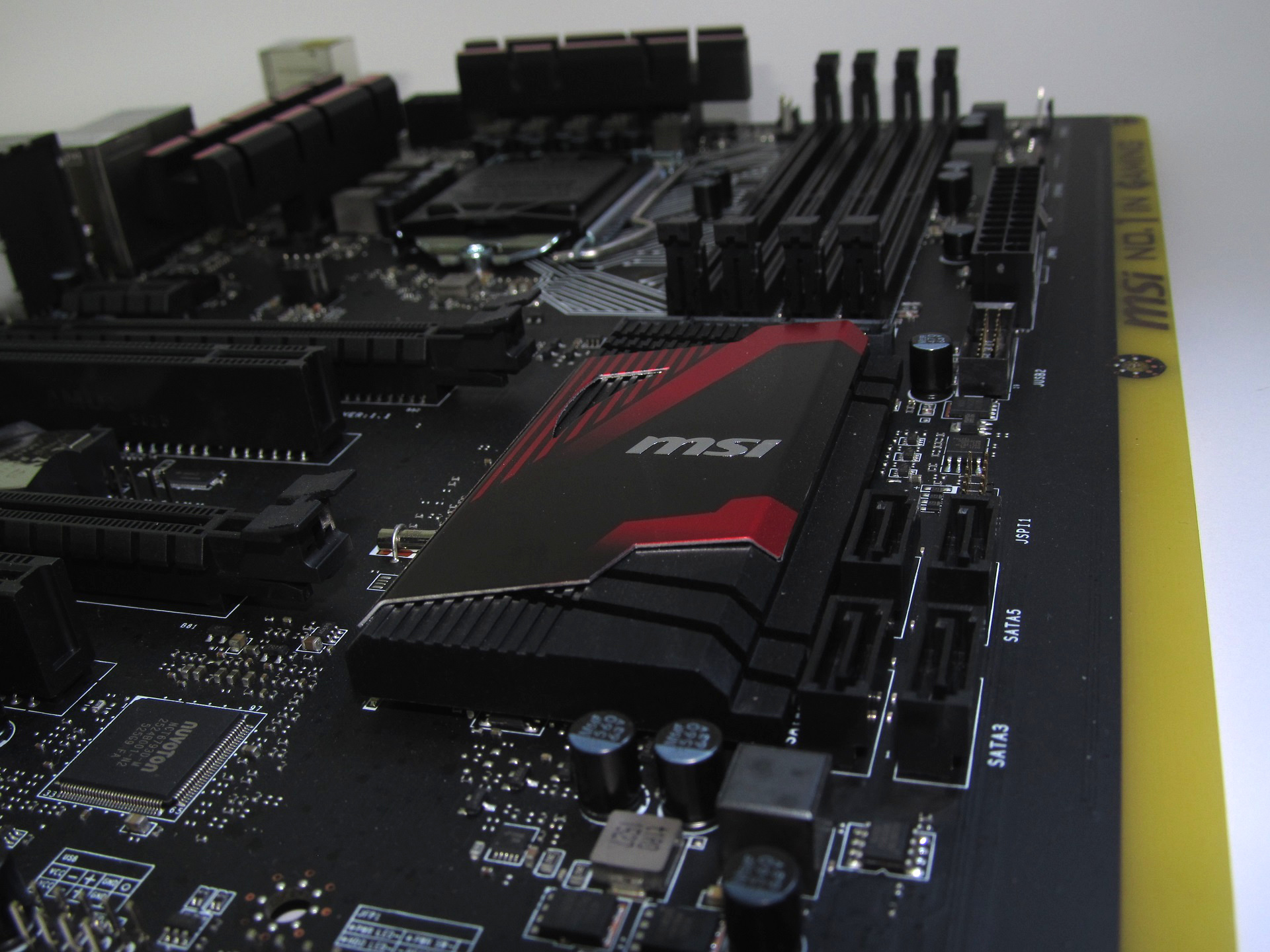 Beneath this heat sink sits the B150 chipset Intel. This is a fairly simple chip with low heat emissions of up to 6 watts. chip It is mainly created for serving motherboards to the business market. It provides six SATA 3 ports, four channels in the PCI-Express 3.0 interface and a host of ports USB 3.0 andUSB 2.0 front end and warranty. Some? It has been up to the motherboard manufacturer's decision. Despite a table, no connection was lost USB 3.0 front to the chassis.

The B150A GAMING PRO is priced at NIS 684 (On the Ivory site), And although it's more expensive than the competition, together with the board are getting the gamers mouse DS B1 of the company. Competitive boards cost around $ 100, and more advanced ones cost around $ 130, which gives us a range of between NIS 400 and NIS 500 for the price of competing boards abroad.

The back-end gaming console features four USB ports 3.0 (red), two USB 2.0 (black) ports, surround sound outputs, HDMI and DVI display ports for the processor core and an RJ45 network interface that is connected to an advanced network controller Intel I219 sample. In my opinion, this is the most optimal network controller today. Programmatic controllers Intel Is a smart choice and I'm glad there's no NIC Killer here Qualcomm. 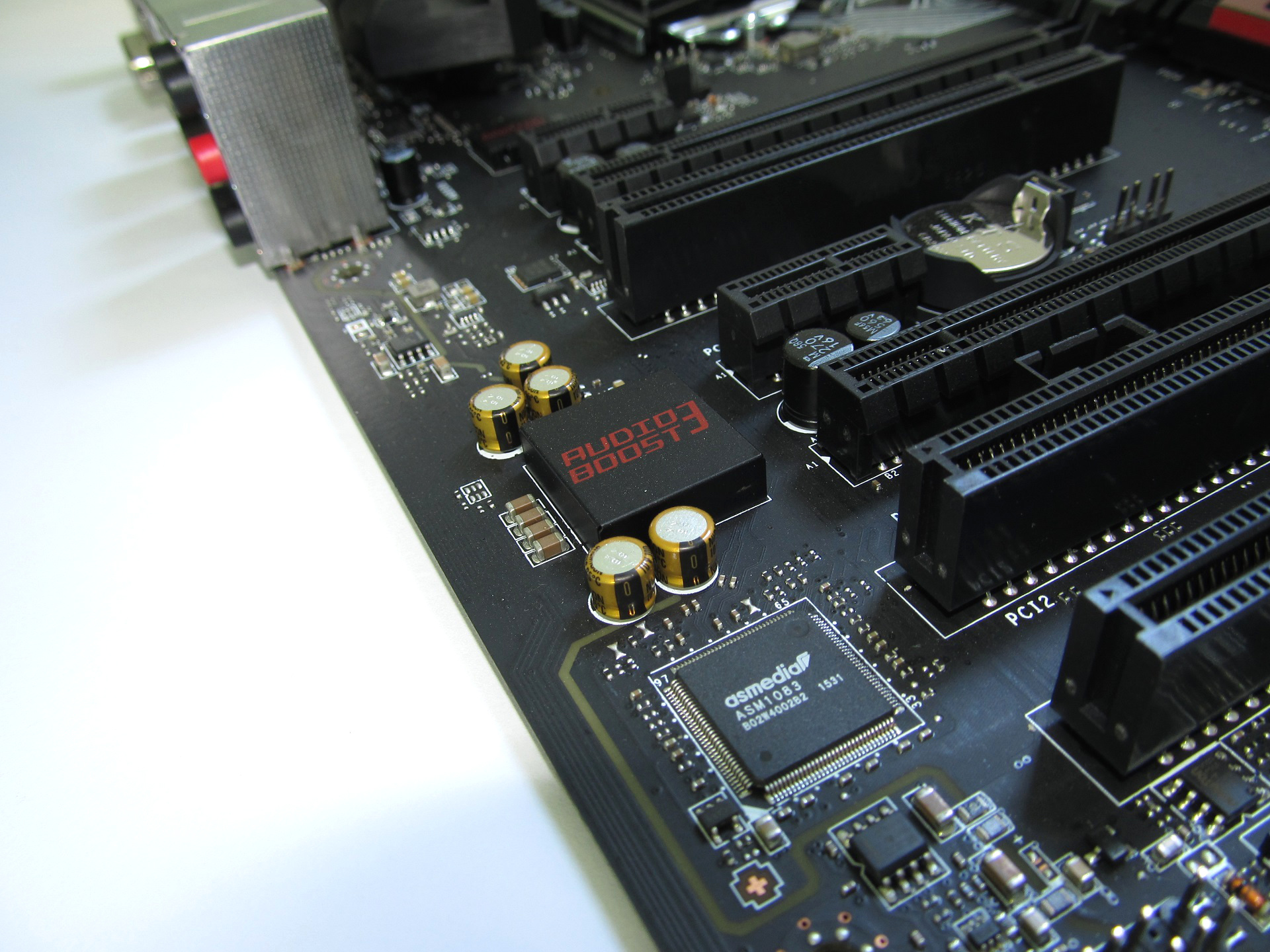 Another feature I'm happy to see on this motherboard is the reference to its sound chip. The trend to improve sound quality in motherboards also continues with models like this, and Riltech's ALC1150 sound chip has already proven to have the ability to provide high-quality sound for a variety of listening devices. It is also backed by stable software with many options. 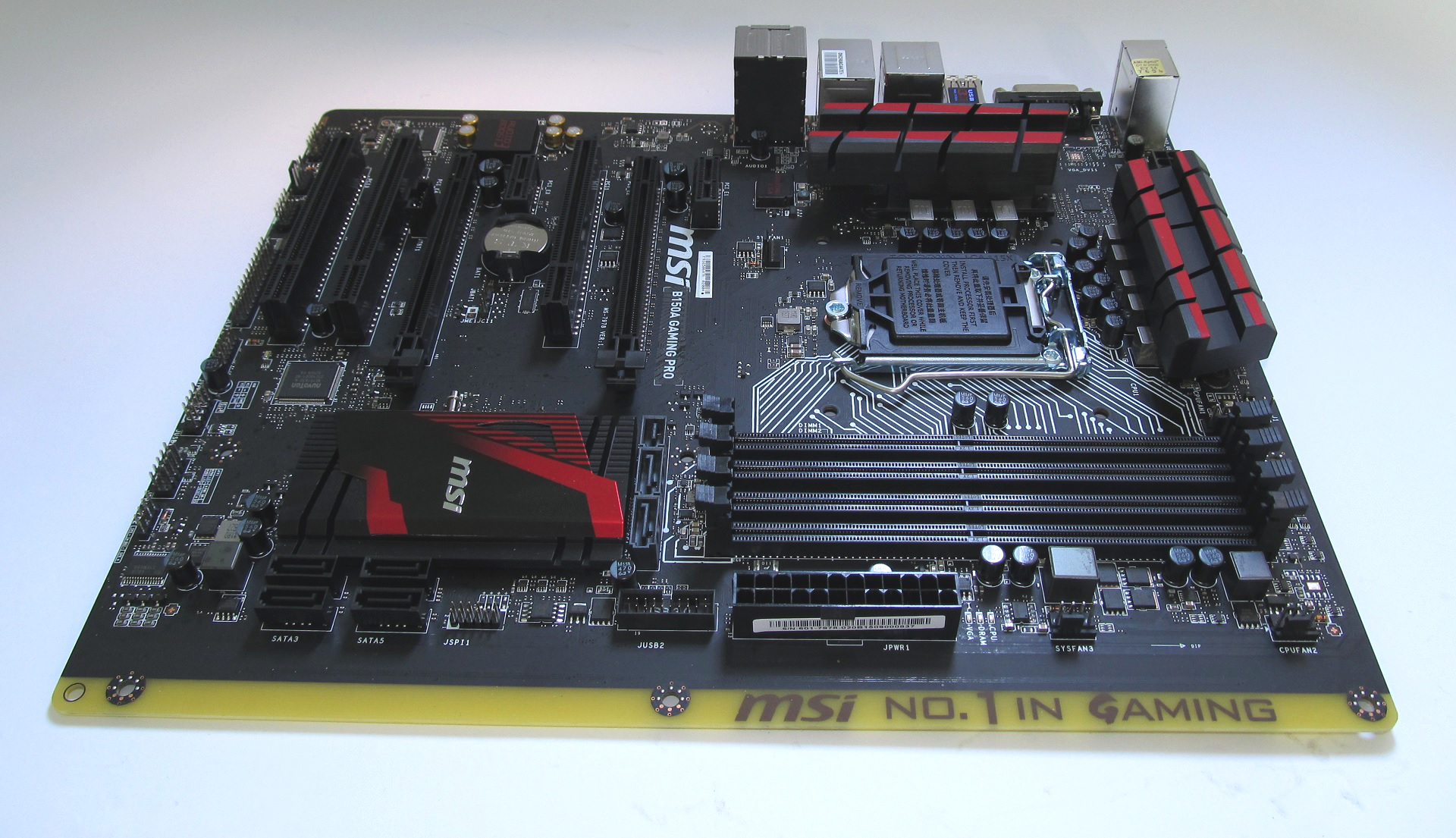 The motherboard expander array includes two PCI-Express X1s, two PCI-Express X16s and three standard PCI ports. The first X16 port is the one used for video cards, while the bottom of the X4 is working on a bandwidth of XXNUMX only. Thus, the motherboard supports a dual video card array of AMD And not of Anodia. The invention of three PCI ports is something that is not necessary at this stage. I think it's possible to change two of them on the way out PCI-Express Another. Let the old interface die quietly.

The hard drives have six SATA 3 interfaces. Two connections (those located above the chip set in the image) can be sacrificed to use a SATA-Express drive. I would be happy to know in response to those who have a SATA-Express drive because the unpopular connection simply refuses to die, despite the small production volumes and the meager selection. A popular yes that does not appear on this motherboard is M.2. M.2 drives become more and more common and replace the SATA 3 interface with high performance on drives SSD. The absence of such a connection in the table may indicate the future of the new composition. 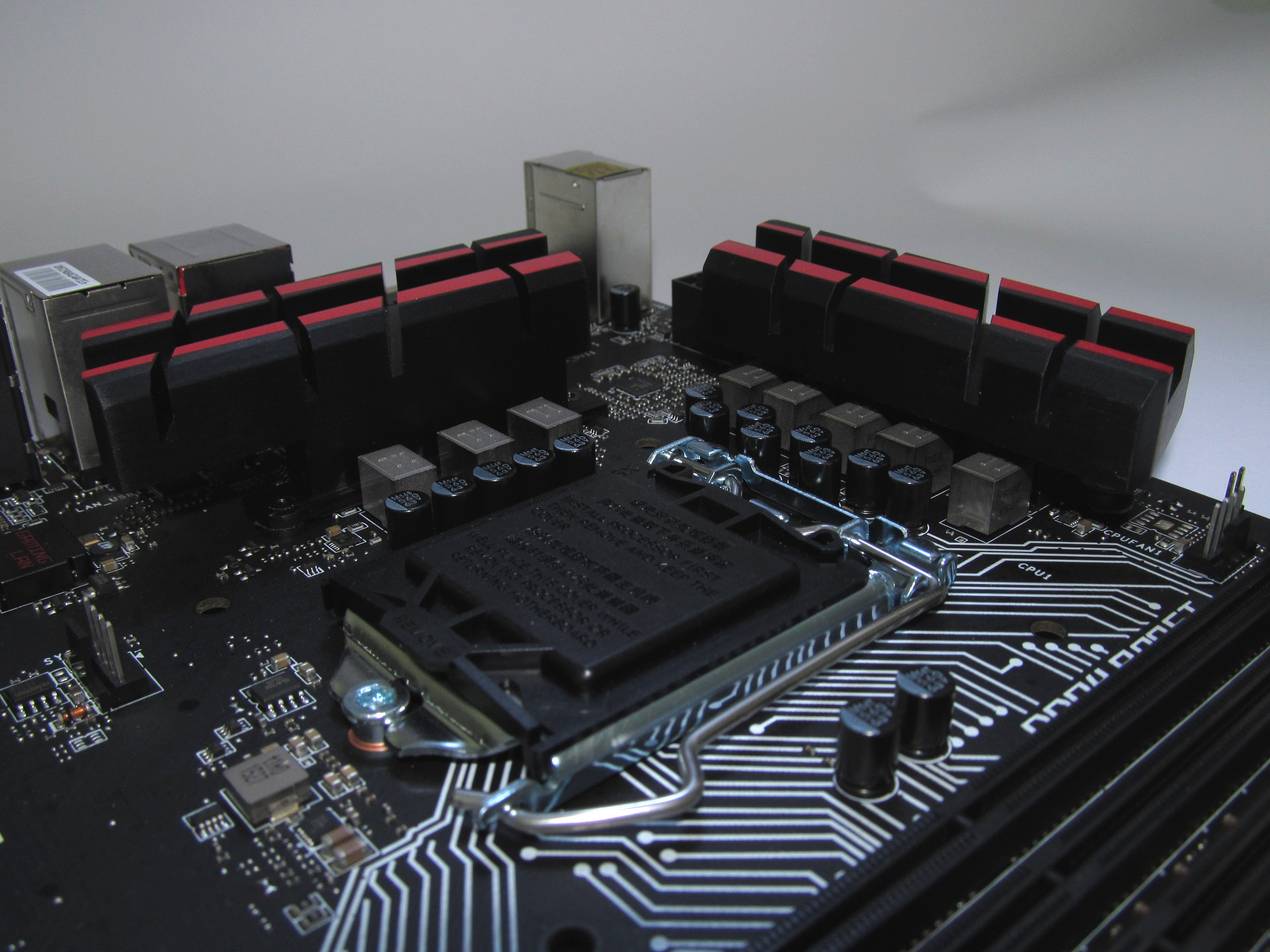 Next to the new LGA1151 chassis, there is a power supply system that includes steps for voltage stabilizers and coils. This system is an upgrade from standard 8-4 systems that you will find in the budget B6 tables and it improves the quality of the power and the life of the computer system. Beyond the high quality of the electricity system, it has no significant role, as you will see in the next section of the review.

The fifth version of MSI 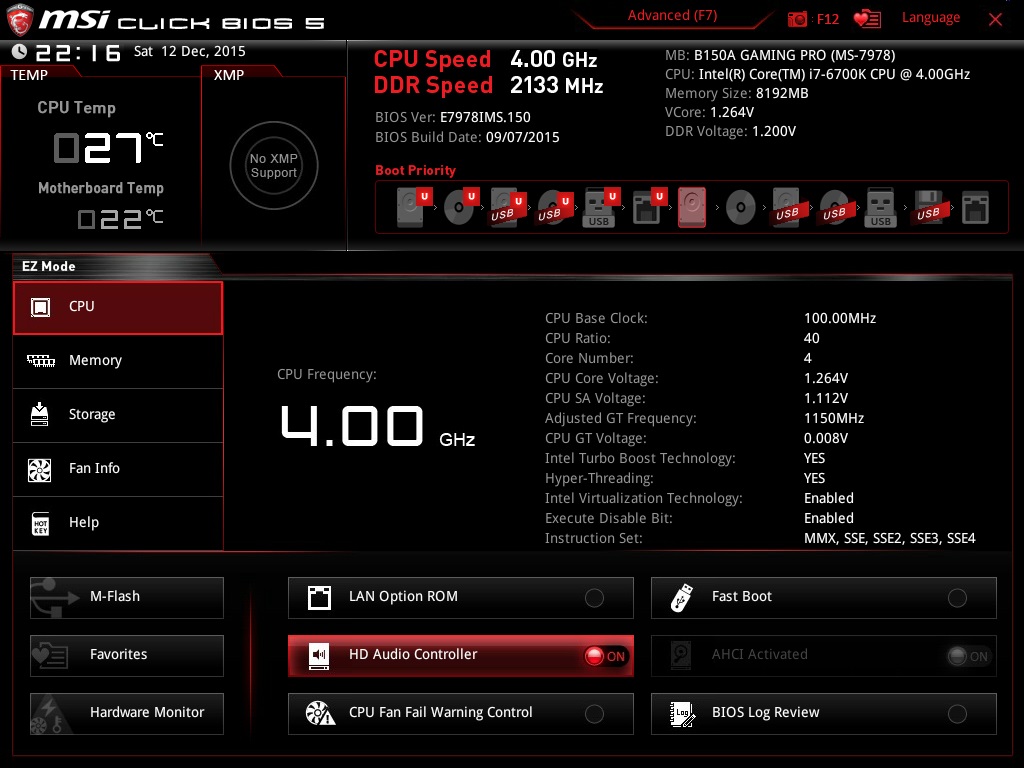 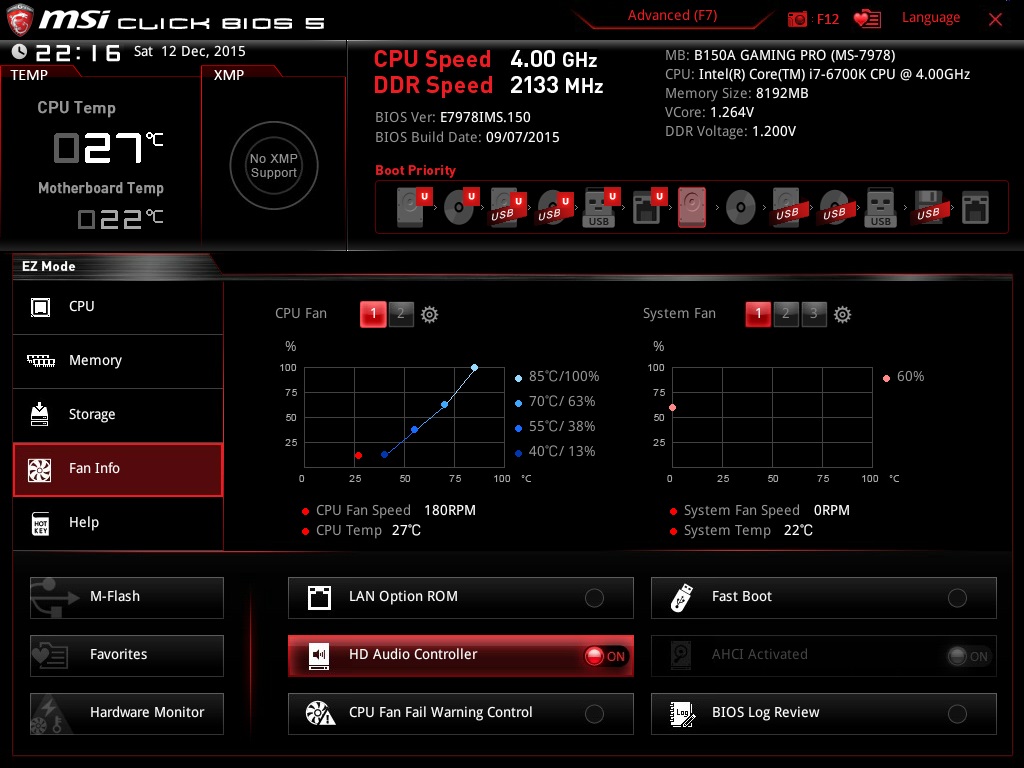 This is the Click BIOS 5 of MSI. This is simple, clean and informative. The first page provides all the information needed by most users and laboratory personnel. Which drives are connected, what is the processor temperature, and which components are active in the system. 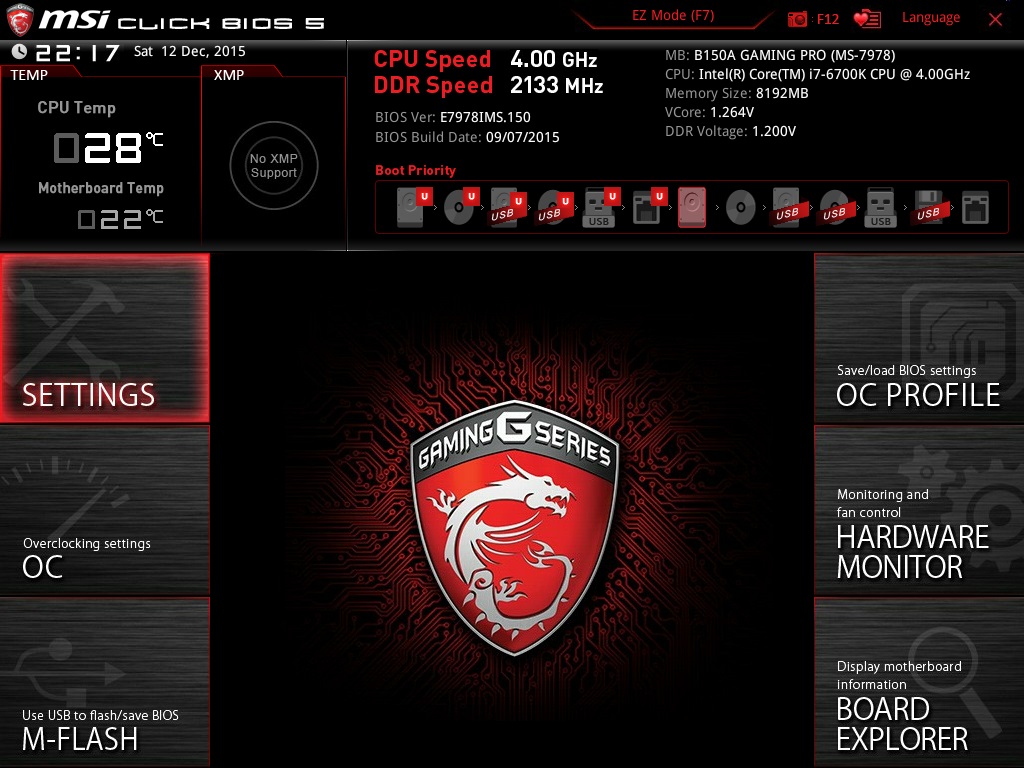 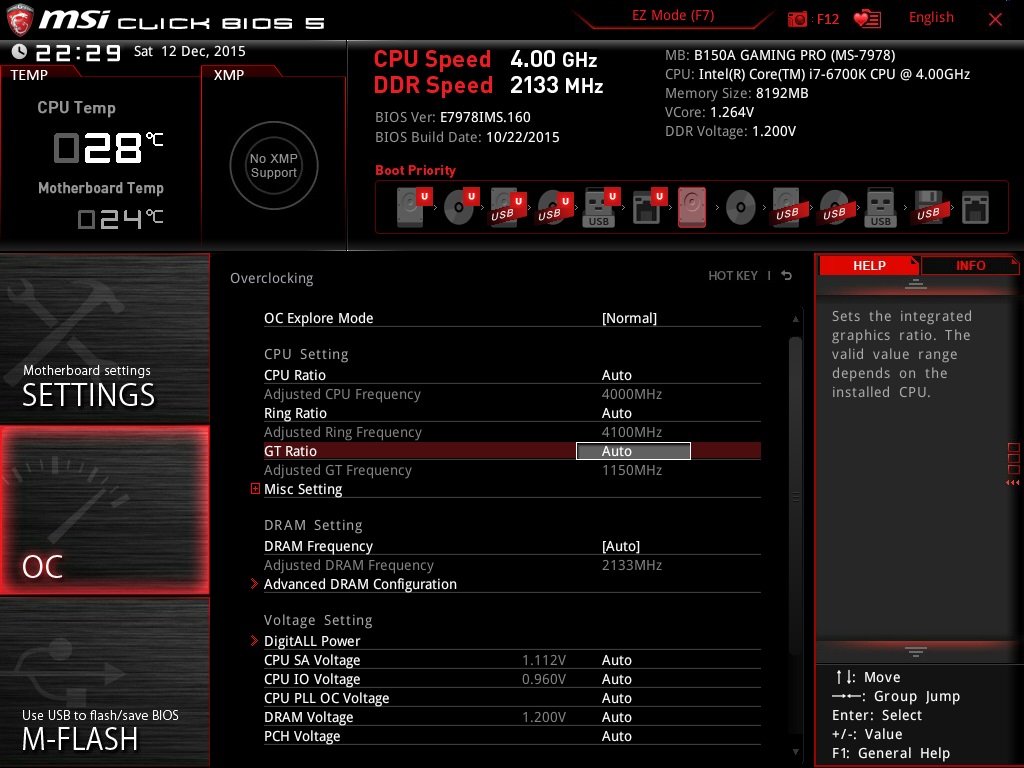 Pressing the F7 key takes us to the familiar BIOS page from the advanced motherboards. Here you will find a few more options such as setting a fan profile, turning off or turning on the lights on the motherboard, settings and controls The fast. 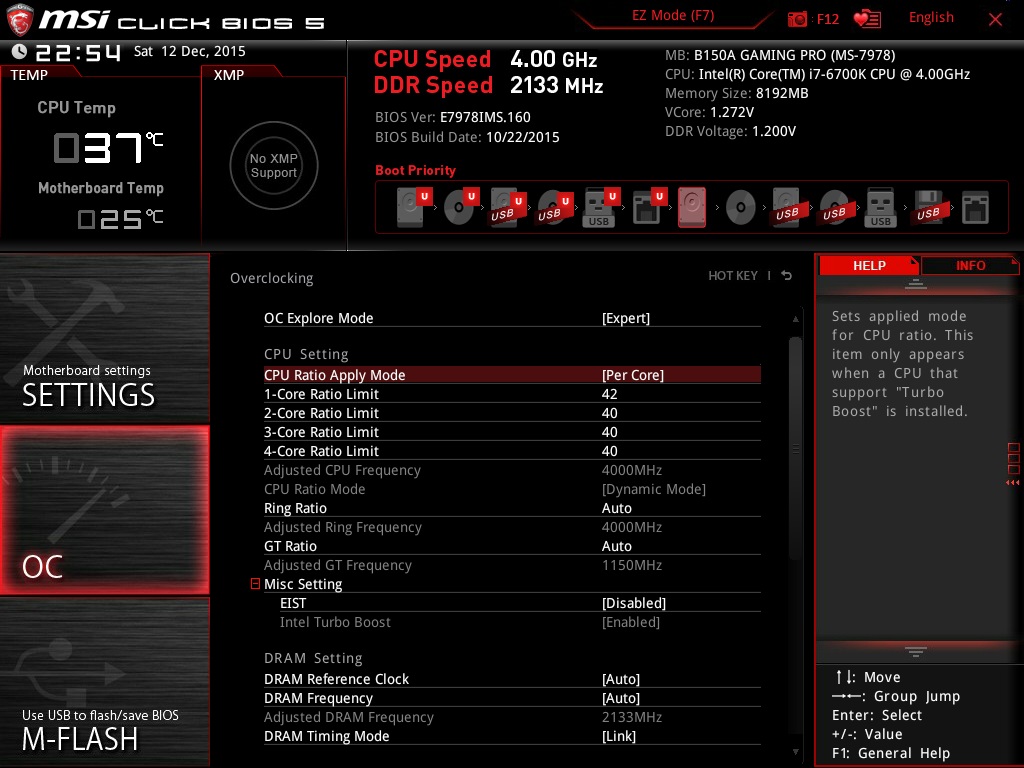 The big problem is that there is not much to do with the rush options. Constraints on Intel's led MSI to lock this motherboard to speed up the CPU, so such settings seem a bit redundant to me.

Here is the Hillite, if you will, the B150A GAMING PRO system.

The bulbs located on the right side of the motherboard allow you to change the way they illuminate with different beats, movement and shades through MSI's dedicated software. This is a nice addition that comes to give a special look to your computer system. This should actually be the main reason why you are buying Motherboard Such, which leads me directly to the conclusion.

The B150A GAMING PRO's MSI Is a product whose purpose is clear to me. It comes to stimulate medium-budget users to invest in an advanced motherboard beyond the boring boards they can buy. An investment that will pay for itself mostly visually because the board lacks some features. Is Appearance Worth Giving Up Certain Features? Depends on who you ask. A user who does not need these upgrade options, will enjoy a very nice salt. 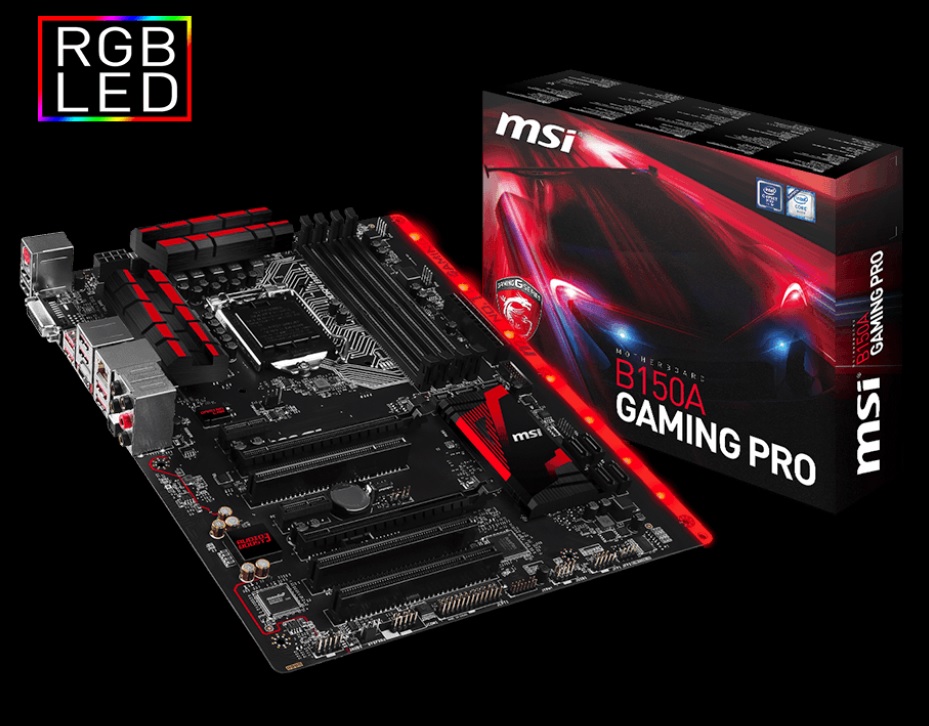