The Turing comes to HWzone: We took the advanced card MSI For the round - has a two-year wait brought the desired improvements in the world of graphics? Come get all the details on NVIDIA's new technologies

In May of the year 2016 landed in the world of graphics one of the most important and popular architecture of all time is Pascal of Anodia. This technology has brought a new record of electrical efficiency to graphic performance that accompanies us to the hip with best-selling graphics cards such as the GeForce GTX 1080. These video cards have become popular in battle GamersDeep Learning, and Cryptoers because of their computational abilities and impressive efficiency.

Now, about two and a half years later, it's time for a whole new series of video cards based on a new architecture also called Turing (named after Alan Turing). The bar is very high and it seems that Anodia Despite the many difficulties today in the world of microchip production, the most notable of which is the shortage of commercial production lines in the 7 nanometer. Nevertheless, she decided Anodia Using a production line of 12 nanometers fromTSMC To build the architecture Turing And will not wait for the future lithograph of this series to mature.

Meet the architecture Turing Of anodia 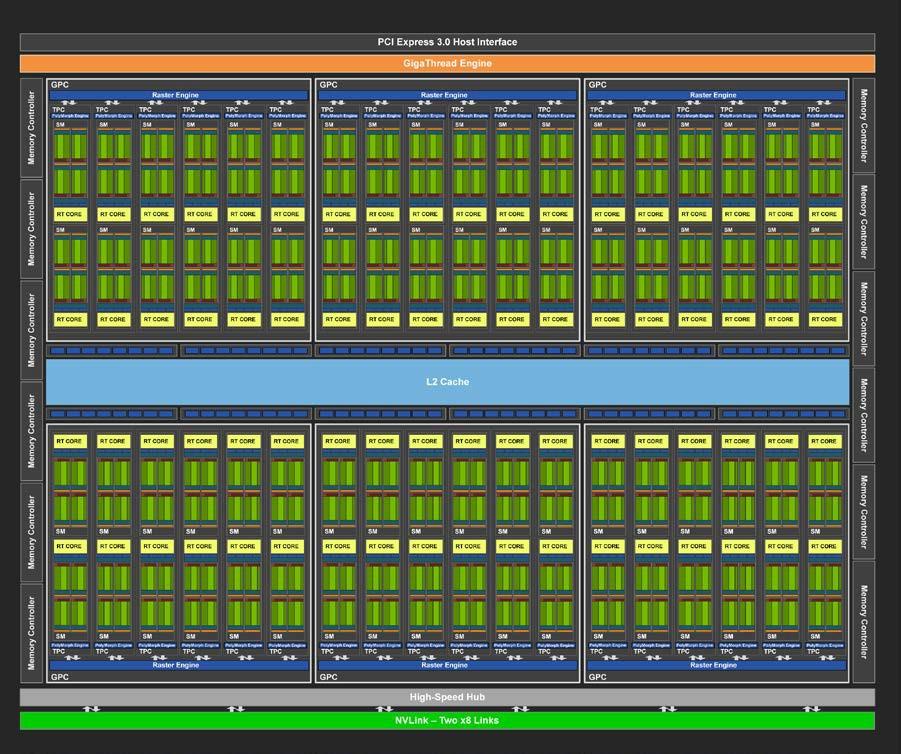 This architecture is the most advanced and one of the most expensive to manufacture in Anodia ever. It is built of many visitors and loads of components זיכרון Agile, the area of ​​this core is huge - 754 square millimeters. For comparison, the size of the core Pascal Is only 471 millimeters square. The Turing core is made up of 18.6 billion transistors, compared to "only" 12 billion inPascal.

In its entirety, Core It contains no less than 4,608 CUDA processors whose purpose is to perform so-called floating point calculations. Therefore, you will sometimes hear in scientific terms the name "Floating Point Units" instead of CUDA Cores, which the launch Anodia In our mouth.

Each small block of 64 CUDA processors has an RT (Ray Tracing) core whose function is to perform advanced lighting calculations that we will touch on later in the audit. That allow you to see the calculated pixels on the screen.

To this core, unlike the Pascal core we knew on the cards GeForce The former also have Tensor cores used in the world of Deep Learning and Machine Learning, which is gaining tremendous momentum and becoming more and more relevant every day. In this way, the algorithm people can customize their code based on the TensorFlow library in the CUDA language and gain access to these processing resources. Thus, the algorithm person can choose whether to use a professional card from the Quadro series - or continue to useGeForce Cheaper for his calculations. As with any processor, calculation time is usually the deciding factor.

In its entirety, the Turing core supports 384 bit-width memory connected to the 32GB of זיכרון GDDR6 graphic. זיכרון This volume is currently not available to the public but is expected to be released during the year 2019.

Turing as shown on the video card GeForce RTX 2080

The Geforce GTX brand has gone on a light vacation and we are confident that it will come back to us in the future. Meanwhile, she decided Anodia That it completely changes its branding towards video cards to the gaming world with a series show RTX The new. The name comes mainly from the RT letters that symbolize Ray Tracing - an advanced ability to calculate realistic light rays in complex three-dimensional scenes. 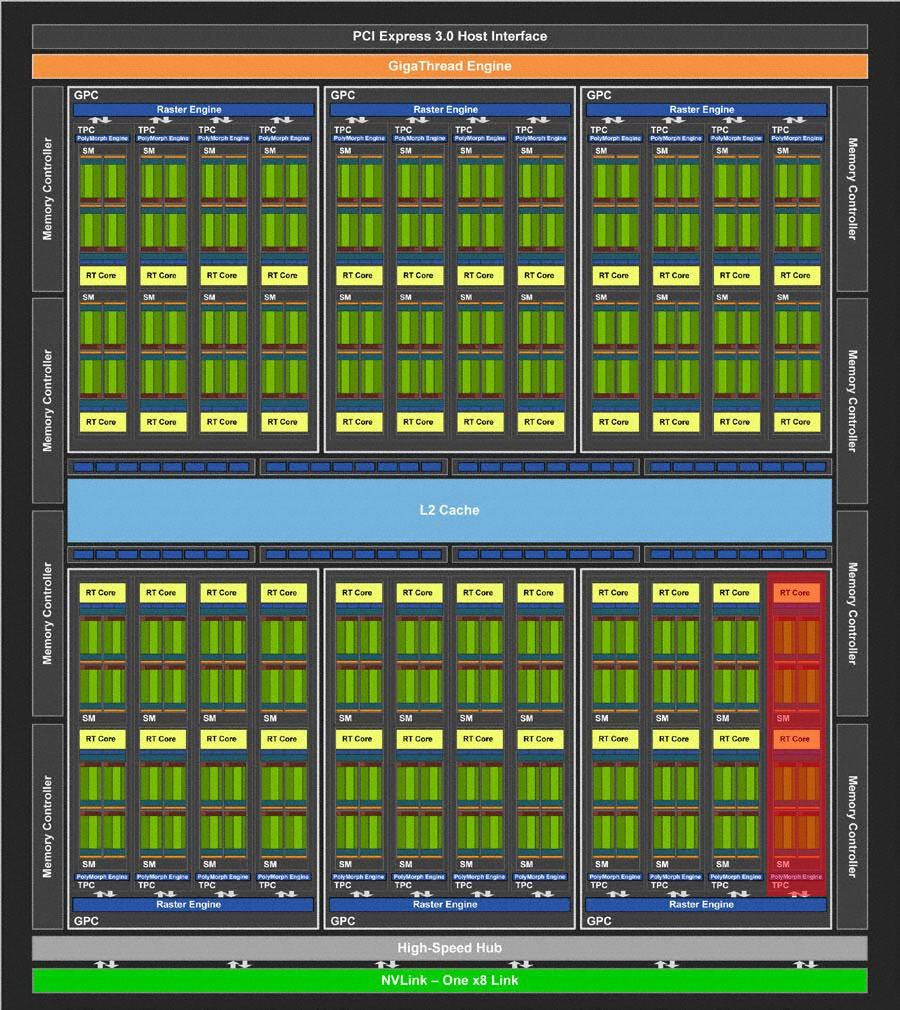 The Geforce RTX 2080 video card uses a slightly different variation of the Turing architecture called TU104. This is actually a chipped core that contains fewer CUDA processors and fewer controllers זיכרון Compared to the 384 bit you'll find in the core Turing completion.

Let's talk a bit about RTX And what the new technologies that accompany the new brand mean.

What is RTX actually? Anuidia wants to relate to the company's new set of features asRTX, Everything about these new graphics cards and some features we've known before.

Many of you have probably already seen this impressive demo based on Star Wars characters. For those of you who have not yet - let me tell you that everything you saw in this video is completely computerized. The characters, environment and all objects in the scene are processed in XNUMXD software only.

Until recently, in order to create such a heavy scene, a talented team of animators was forced to work with personal computer stations that connect to a server whose task is to perform slow and cumbersome rendering that can take days to see the result. This is due to the fact that the animator computers could not cope with such a huge amount of graphical calculations in real time.

"Real time" is the same time when you can stop everything, take a trip to the scene in order to examine all the elements at the level of full graphics. So far, the same tour and work on inside the demo is done when particularly heavy elements like the lighting calculation were completely turned off. Thus, a light enough environment can be obtained for working with the machine. Only then is a rendering command passed to the rendering server to calculate each frame you see in the video.

The RTX technology that operates here in the core of Turing enables advanced calculation of real-time illumination without unbearably burdening the graphics core. Thus, the amount of images per second when you tour the scene is high enough to allow for proper operation. All this is made possible by the new RT cores that it has installed Anodia In architecture. Here is an example of how to implement the technology in the upcoming game. Exit Exodus:

The main purpose of using Ray Tracing is to simulate realistically the behavior of the rays of light, the fact that when a light hits an element, it also reflects light to the environment.

At the moment there are no examples RTX Ray Tracing, which can be tested hardware, so unfortunately the video card in the review will be tested fairly standard with important titles exist in the gaming world. However, there is no doubt that using Ray Tracing is very heavy, and significantly reduces the number of frames per second in the same scene.

Let's talk about a topic that gets a little less exposure from Anodia but in our opinion may be no less important than Ray Tracing at least in the coming years - the topic of advanced anti-aliasing.

With your permission we will start with the question - what is AntiAliasing and why does it exist?

AntiAliasing or short AA is the ability to smooth jagged edges in the scene below:

Serrated edges are formed when there is a large difference in color between two different pixels. The goal is simple - to remove the jagged edges of the image in the most efficient and high-quality way possible. Sounds pretty simple but this is one of the biggest challenges of the XNUMXD world since its inception.

There are many different methods, and infinity algorithms to put an end to jagged edges in 3D. The highest quality computer games available today is MSAA or Multi-Sample AntiAliasing. In this method the 3-D scene is actually processed at a higher resolution in advance and combined with a lower resolution according to that defined. Thus, the edges look smooth and the scene pleasant-looking. In return? More processing power is required to perform such an action, as if you were rendering the scene at a higher resolution.

DLSS is part of the new RTX system Anodia Refers to a new method sponsored by the ability to actually perform Deep Learning of scenes and understand which elements can undergo image smoothing. From there, by the way, comes the name - Deep Learning Super Sample. This is a feature that should come from the developer herself in convincing of Anodia And at the same time there is a respectable list of developers who have already undertaken to include DLSS as an option. Here is a video demonstrating this in Final Fantasy XV:

EngineUnreal Engine 4 has already released tools that allow developers to include DLSS technology. More graphical engines are also expected to include DLSS support soon, and so the market seems to be on the way to adopting the technology in question.

We will of course be updated on performance tests when titles start coming out with DLSS support and we will compare quality and performance against standard AA methods.

It's time to dump her and move on.RTX 2080 Gaming X TRIO from MSI