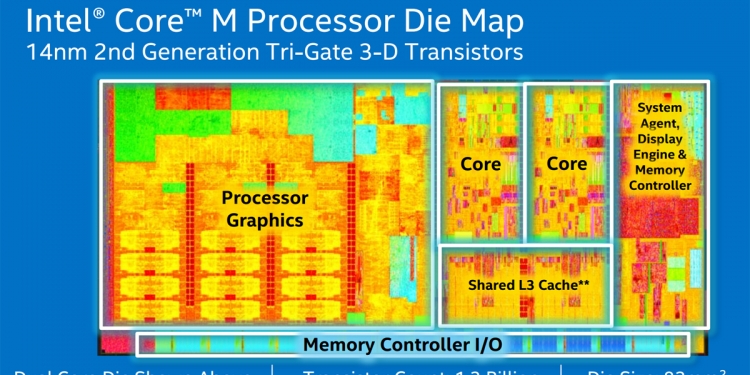 Chipzilla announced four new and slightly upgraded models for its first series of 14 nm products, which has already raised some eyebrows due to lower performance than previous generations seen in initial reviews

Intel's new Core M processor family, Which it first introduced earlier this year, amazed us when it was able to compress a full Core architecture (two processing cores, an Intel 8th generation graphics core) into a chip with a thermal envelope of only 4.5 watts thanks to a groundbreaking manufacturing process at 14 nm. The significance of the move was clear - full and real window devices that will be as thin, light, economical and quiet as their chip-based competitors ARM.

Our expectation of Core M-based products has been very high, but recently not-so-encouraging reports have surfaced that every trick has a limit and such a massive miniaturization of the thermal envelope also has a significant price - which is reflected in a particularly aggressive frequency limit and surprising performance. To the detriment that even made it very difficult to perform very basic actions in some cases, especially UltraBok Yoga Pro 3 of Lenovo Which was theCore The first M landed by various visitors.

Now showing Intel Four new modelsCore M generationBroadwell, Which join the three original models - perhaps with the aim of correcting some of those notable shortcomings in terms of performance. The new models are identical to those previously announced in all features except for the core working frequencies, and here comes the seemingly big change in the form of 300MHz base frequency to the graphics core in all new models - compared to only 100MHz base frequency in the original models which allegedly resulted in jerky performance Video, Scrolling sites in a browser, and so forth.

The improvement in working frequencies should provide a more balanced and reasonable performance, although it is not yet clear what led to the ability to increase speeds as the new models offer the same thermal envelopes as those of the current models (4.5 watts as a base, with dynamic adjustment to 3.5 watts to 6 watts depending on To select the assimilator manufacturer). In other words, it is not clear whether the increased frequencies are due to higher quality and more economical chips that come off the fresh production lines by 14 nm or whether this is another compromise it has made. Intel - A compromise that may bite back users in the buttocks in retrospect.

CPUsCore The updated Ms will be available for PC makers during the current quarter, so first products to be used will land only sometime early next year, in what will be the second wave of device-based devices Broadwell After the end of the year.

Intel's Core M processors are without a doubt an engineering marvel, one that also works in practice and brings Intel another big step on the way to eliminating the biggest relative advantage that the architecture has.ARM Across its products - the biggest question right now is how much exactly will users need to be flexible to enjoy a tablet PC wrapped in tablet skin Android או iOS.