Today is an important day in the world of video cards and graphics in general, and marks the official launch of the GeForce RTX 3080 video card from NVIDIA, A video card that symbolizes the leap of a generation that many have been waiting for. As of today, the 3080GB GeForce RTX 10 video card of זיכרון Graphic is available for purchase from a variety of different manufacturers in the computer stores, and those that are available in stock can be delivered to customers who purchase it.

In this review we specifically focus on a very interesting model from the hardware manufacturer Asus. He is theRTX 3080 TUF OC. 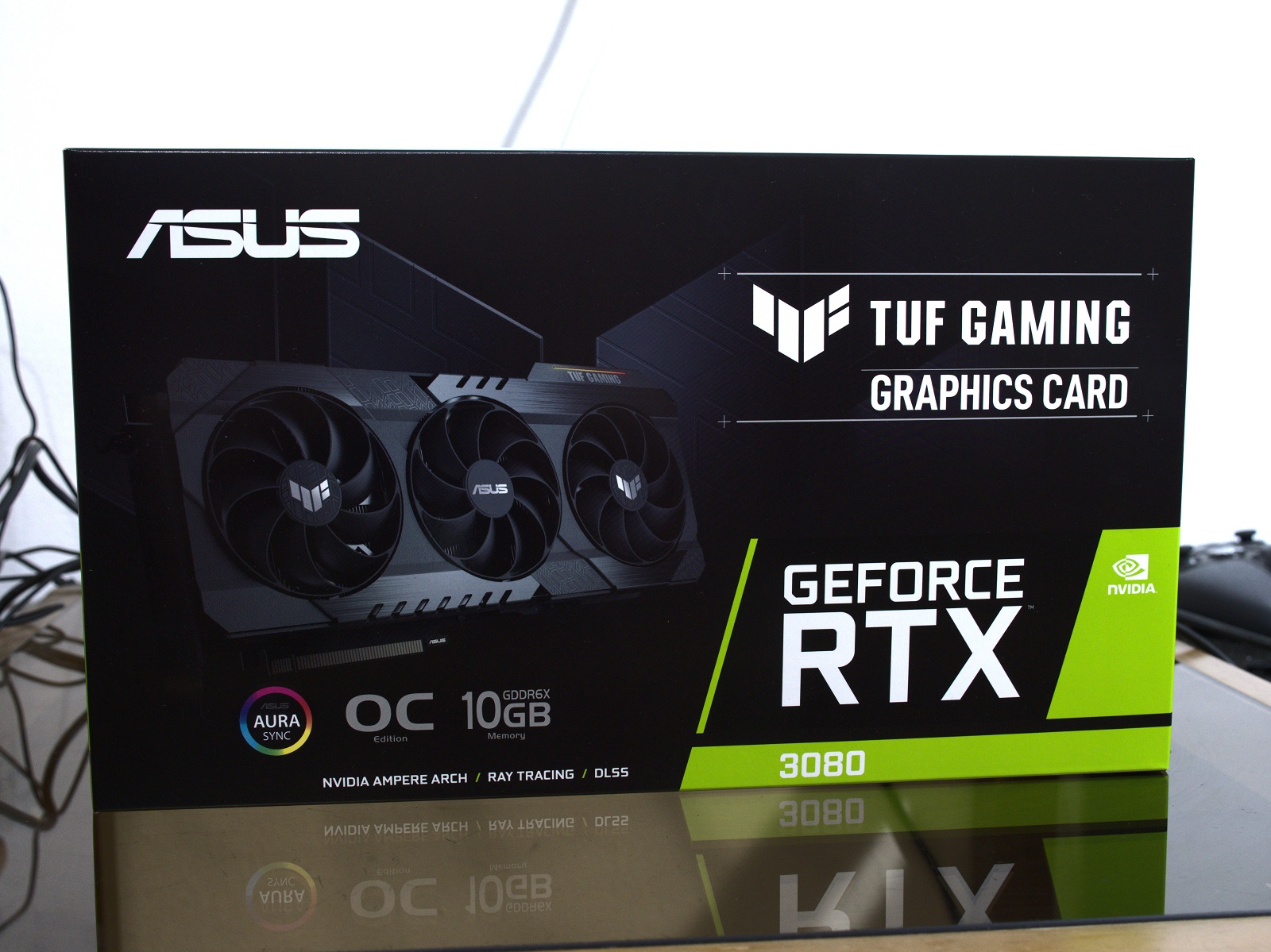 This video card costs about NIS 4,500 when it is the official replacement for the GeForce RTX 2080 Super, ahead of the standard GeForce RTX 2080. At the launch NVIDIA Claims that this is a significantly faster video card from the flagship branch that has dominated the market to date, theGeForce RTX 2080 Ti. We will of course include detailed performance tests and their analysis.

Before we get to the model in question, let's get acquainted with the technologies behind the innovative Ampere architecture of NVIDIA As shown on this video card.

About two years ago we were exposed to the first architecture of NVIDIA Capable of performing fundraising (or Ray Tracing if you will) on a serious level. Beam tracking results in completely realistic lighting in XNUMXD graphics just as nature does, with accurate calculation of lighting by intensity, before the texture of the surface where the light strikes, and by returning light from surfaces to other areas. 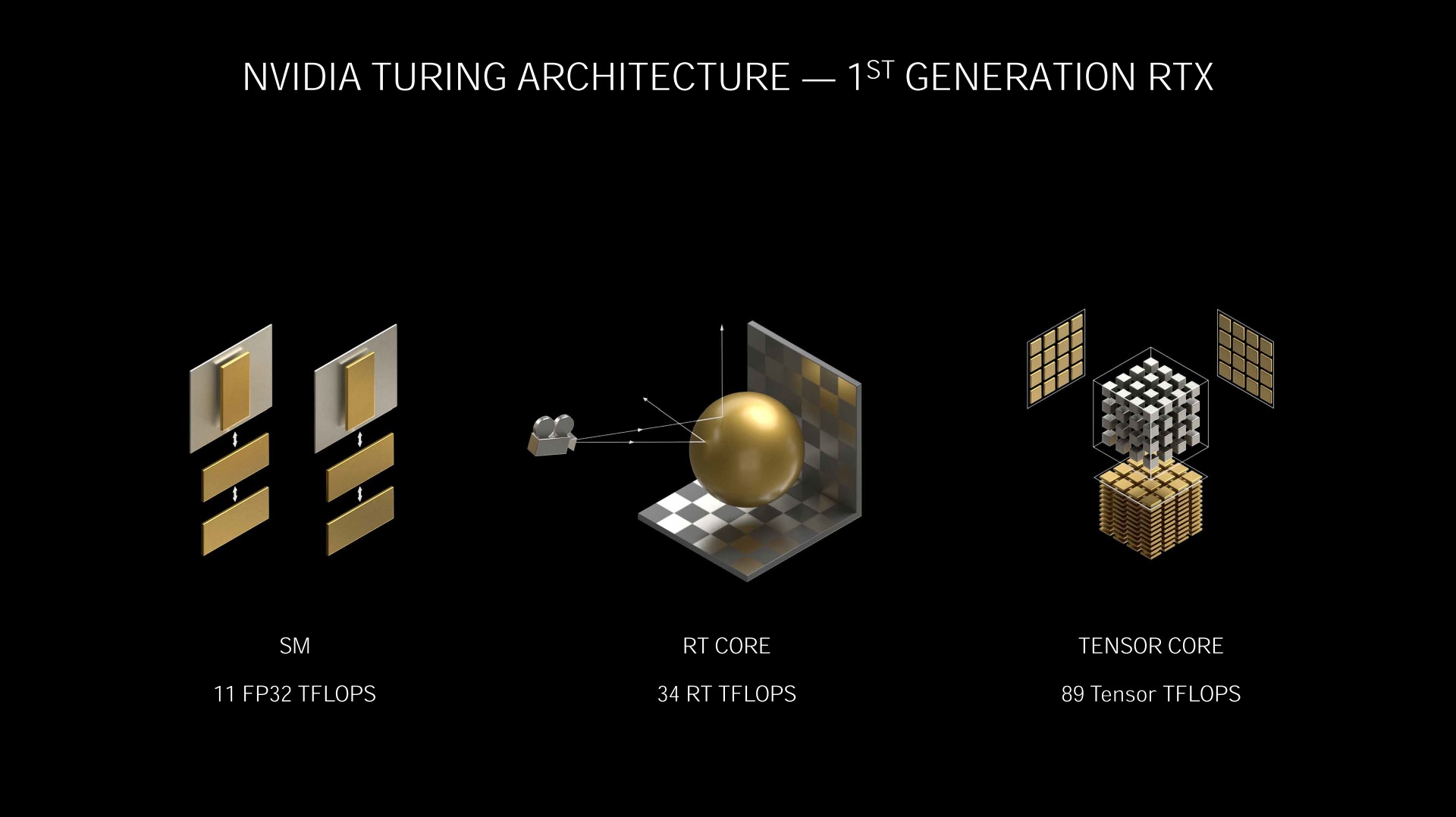 The main components of the processing power within the graphics cores of NVIDIA SM units are generally responsible for geometric computing, RT cores (Ray Tracing) and Tensor cores for use in learning. In the Turing era that came to us with the RTX 20 series, the division was that each internal processing unit would have a certain amount of each resource. Core Like the TU102 which is the flagship of Turing It carried 72 SM units divided into 288 small processing groups (16 CUDA cores in each group), with each group also receiving 2 Tensor processors. All 4 groups received a single RT processor. 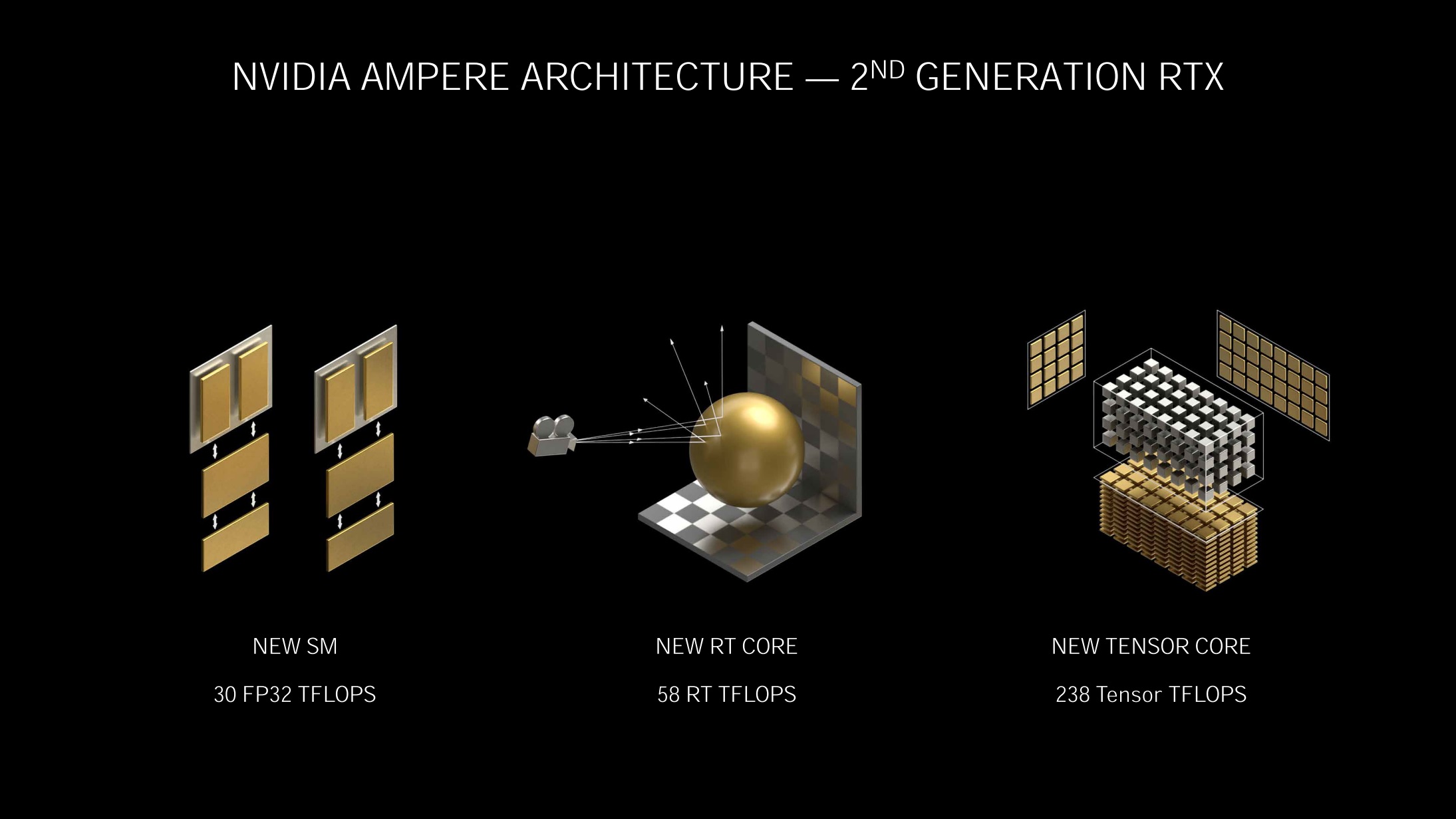 In the new Ampere generation, NVIDIA Decides to continue inflating its RTX card capabilities. The GA102 core as shown on the GeForce RTX 3090 video card contains 10,496 shading units, 328 Tensor units and 82 RT units per unit. In the Ampere generation the counts of those SM processors, or CUDA units, are measured slightly differently as there are now two units in each individual communication tube, compared to one processing unit per tube in the previous generation. Therefore, 10,496 CUDA processors compared to 4,608 does not mean that we have doubled our shading processing power. It can be thought of as multi-threaded in main processors (HyperThreading technology of Intel for example). 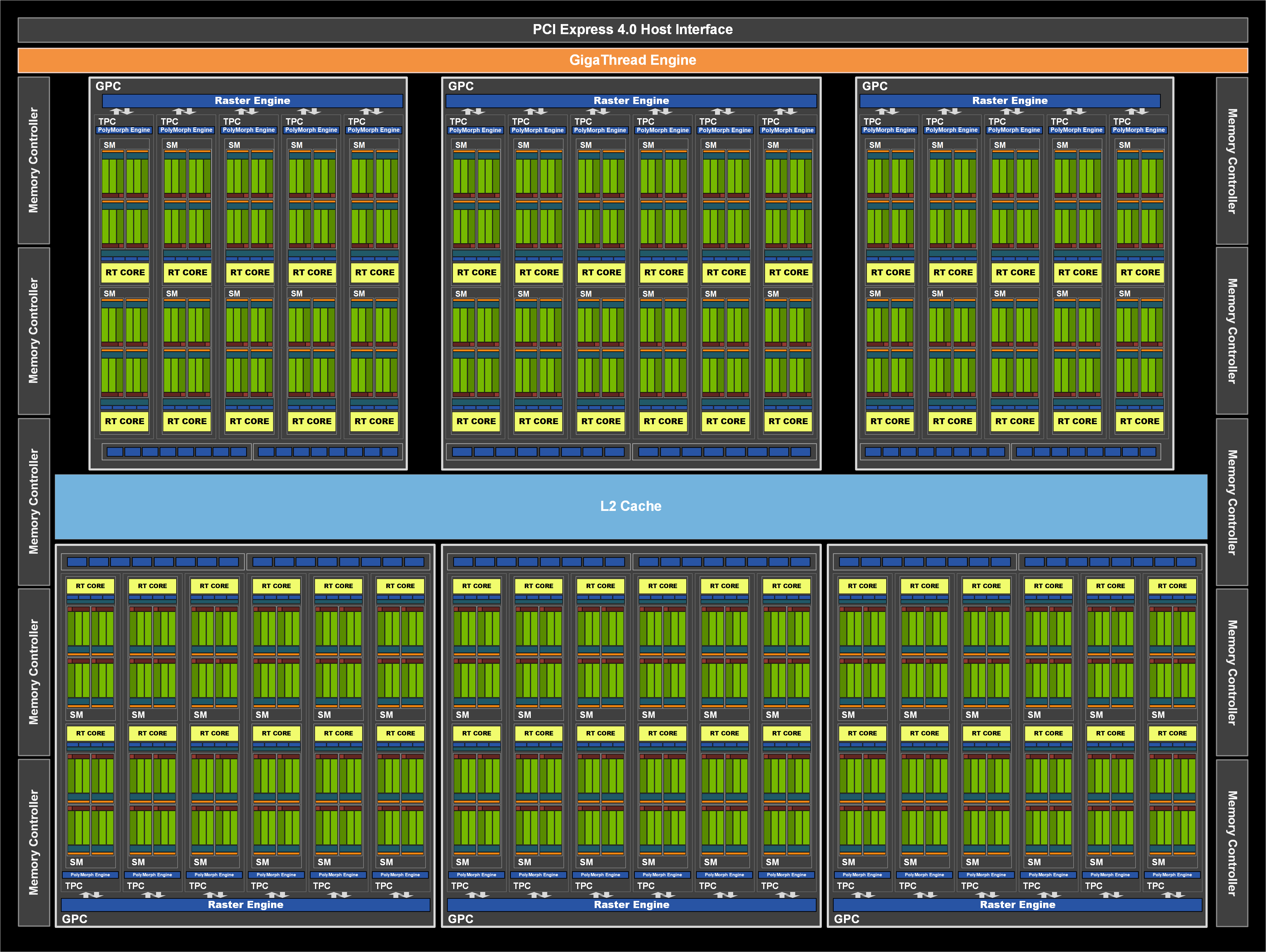 This is what the graphics core of the GeForce RTX 3080 looks like under the hood. Roughly speaking, there is a division into the following five large processing arrays in communication with 10 microcontrollers זיכרון. Every such microcontroller speaks cattle זיכרון Main in the core and has a 32-bit channel which passes through the printed circuit board straight to the chip זיכרון. Not coincidentally, the GeForce RTX 3080 contains 10GB of זיכרון Graphic in 10 different chips. The core has a pool זיכרון 5MB second-level cache. 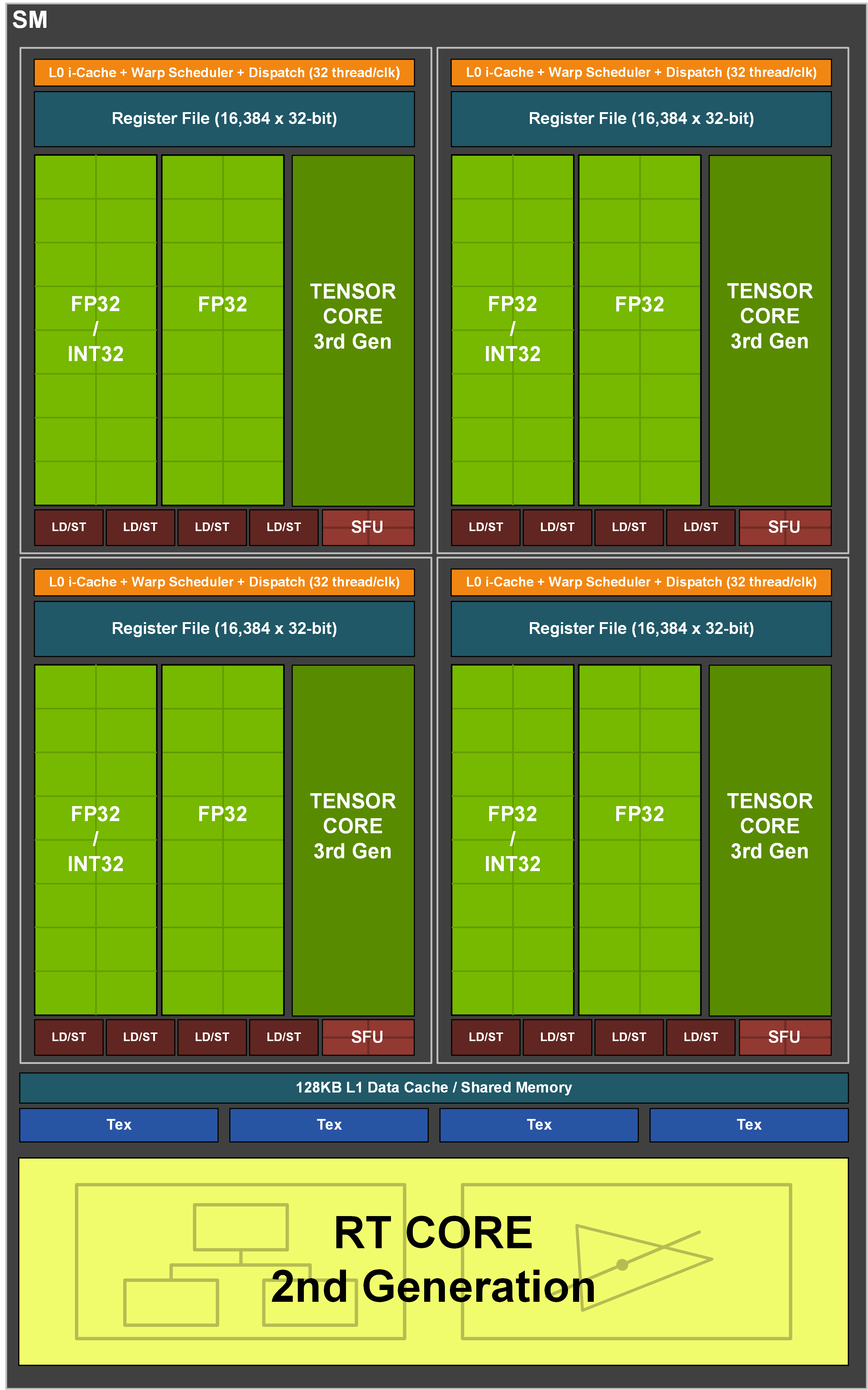 This is how one SM group looks at magnification, as it contains one new-generation RT core, four Tensor cores for learning and 128 CUDA processors. Using 68 such sets brings the graphics core to 8,704 CUDA processors and 68 RT processors along with 272 Tensor processors. All this in order to make real-time graphics more realistic and as fast as possible the image rate per second. 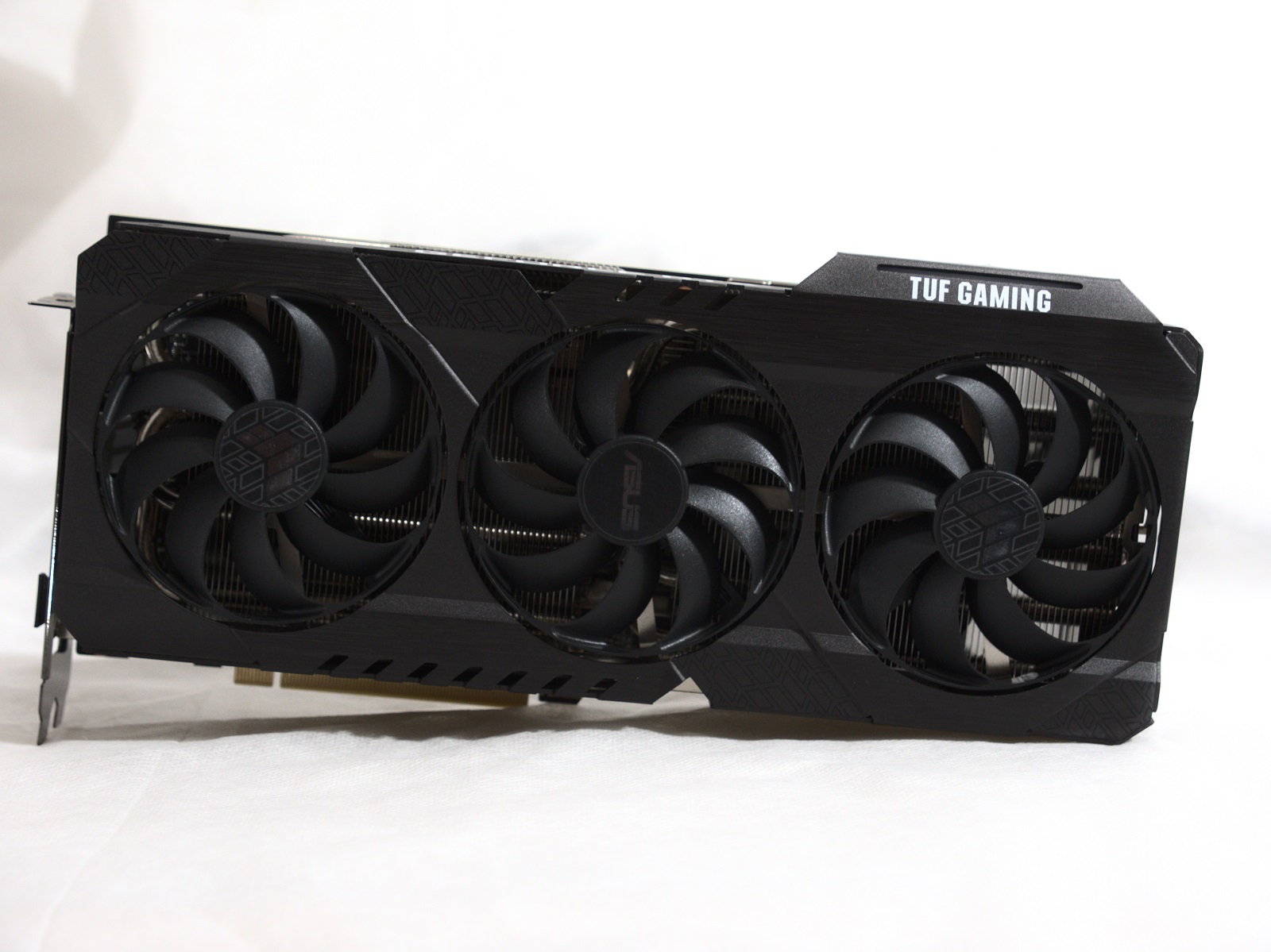 This is the design that Asus chose to create the Geforce RTX 3080 card from its TUF series. Specifically, the model is TUF-RTX3080-O10G-GAMING. This model is owned Cooling Quite large and three fans along with a brand new printed circuit board. 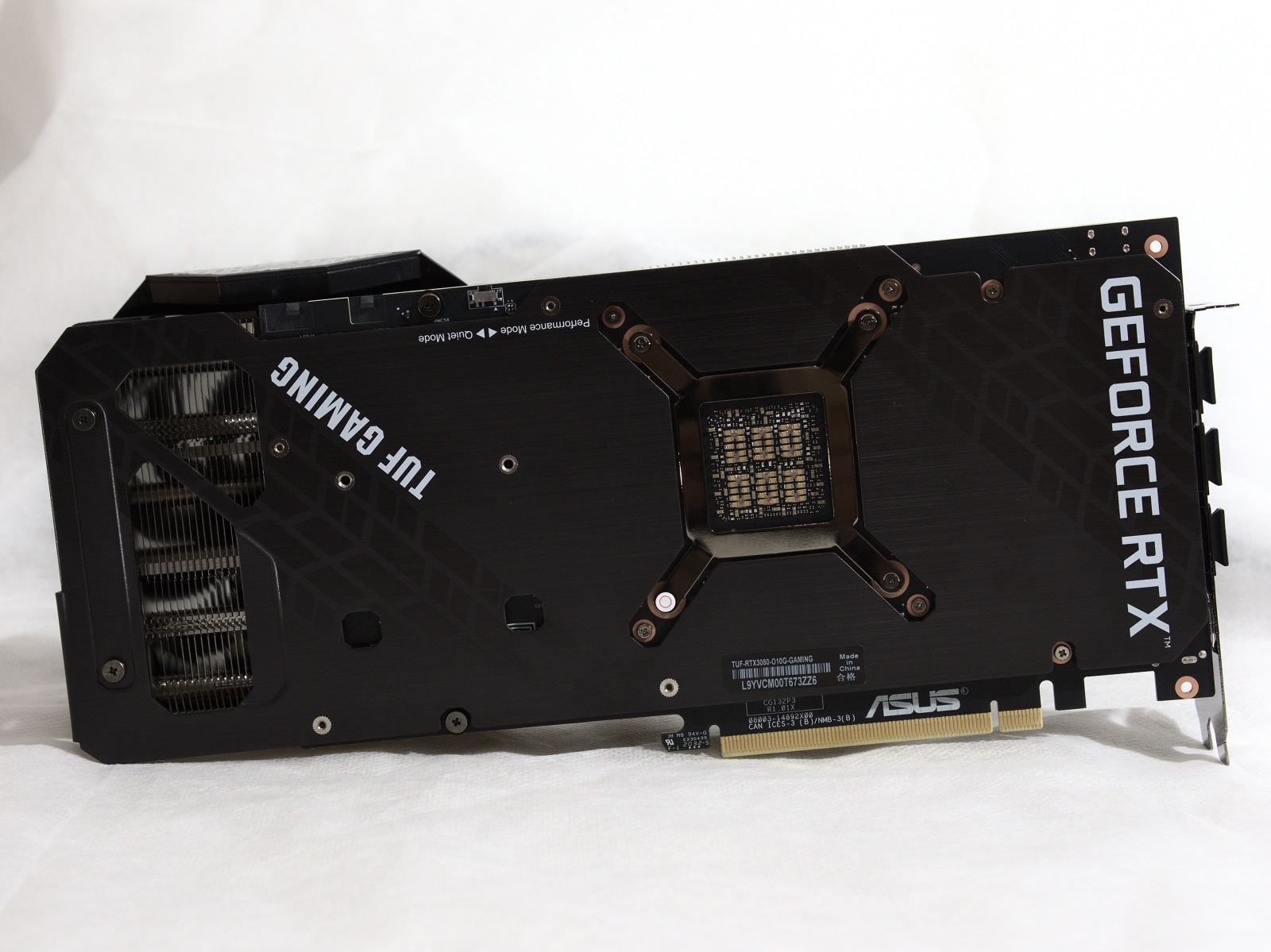 The circuit board printed on this video card is shorter than the total length of the card to allow one of the fans to flow air through the heat sink toward the CPU area of ​​the computer. This is something that too graphic cards Others in the series RTX 30 efforts. The length of the video card is 30 cm, it is 12.7 cm high and 5.17 cm thick. 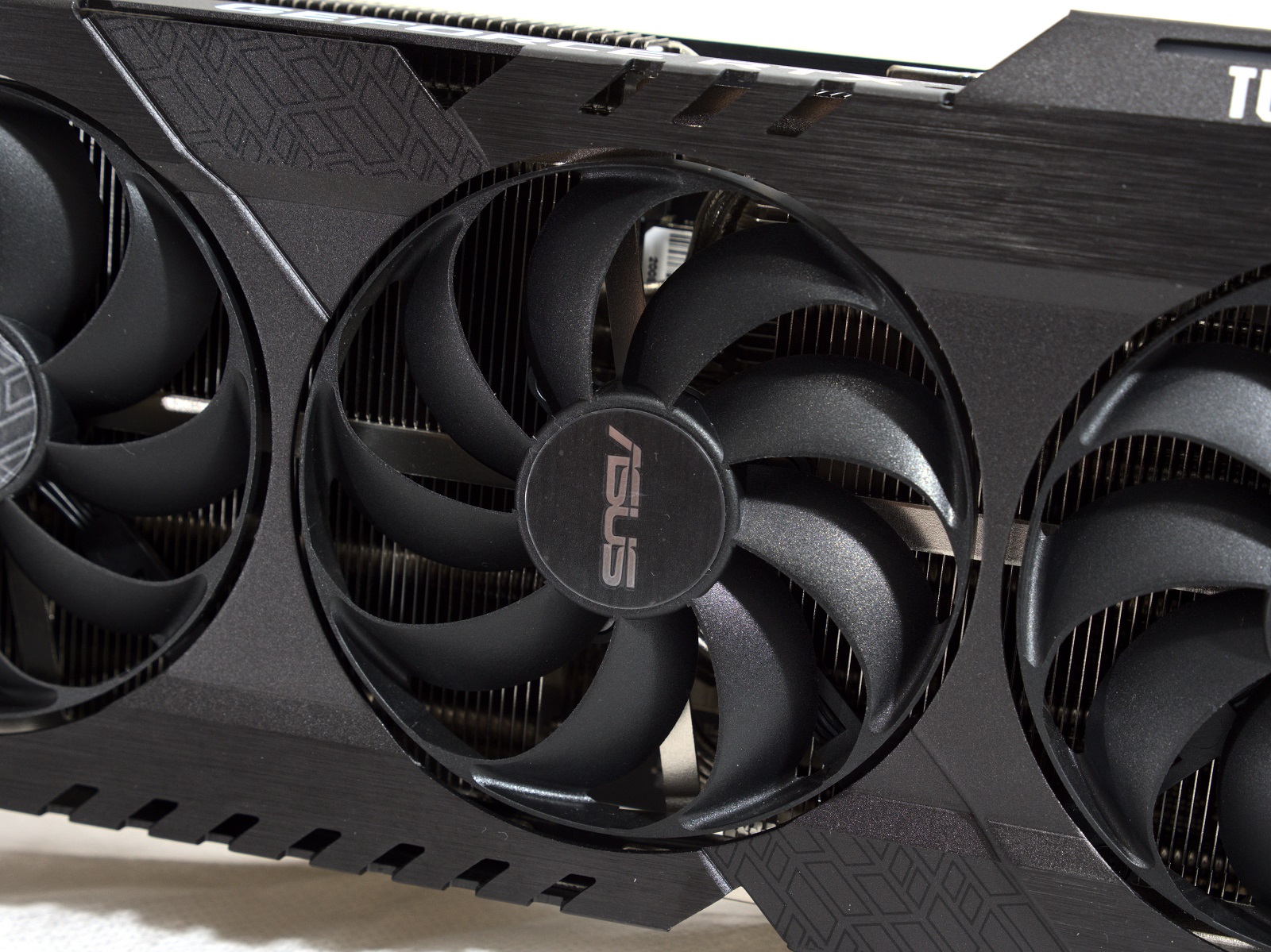 This video card uses three fairly advanced 90mm fans. The middle fan rotates clockwise while the other two rotate counterclockwise. This is so as not to create resistance when the air enters the fan and lowers the efficiency. 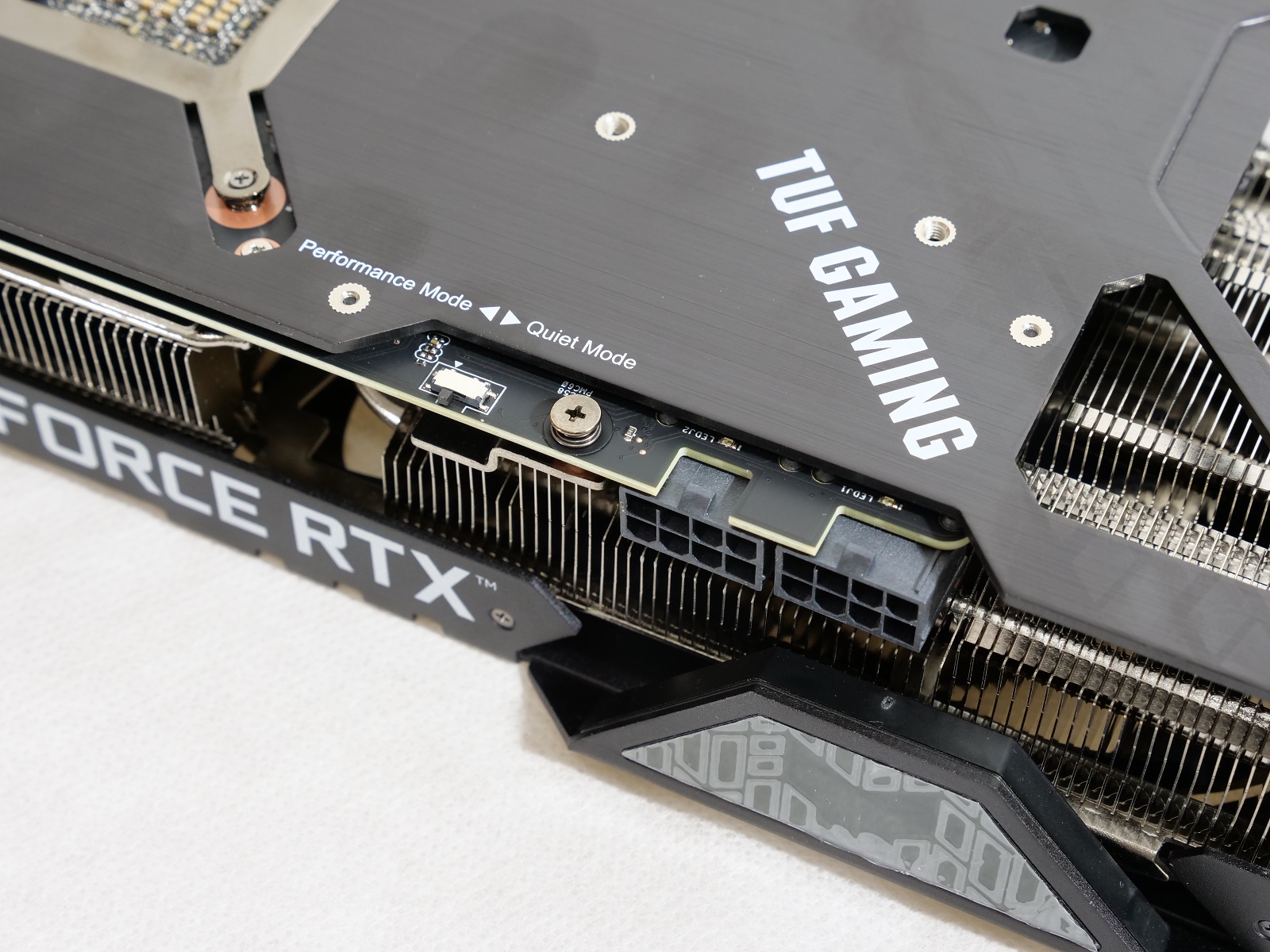 This video card has two 8PIN PCI-Express power connectors. A connection of both is required for standard operation of the video card. Also, near these connectors you can find a BIOS switch since the TUF has a dual BIOS. The purpose of this feature is to allow users to choose between a more aggressive fan operation and a less aggressive one. In Performance mode the fans start to spin already from temperature Core Of 45 degrees Celsius, while in Quiet they start at 55 degrees. 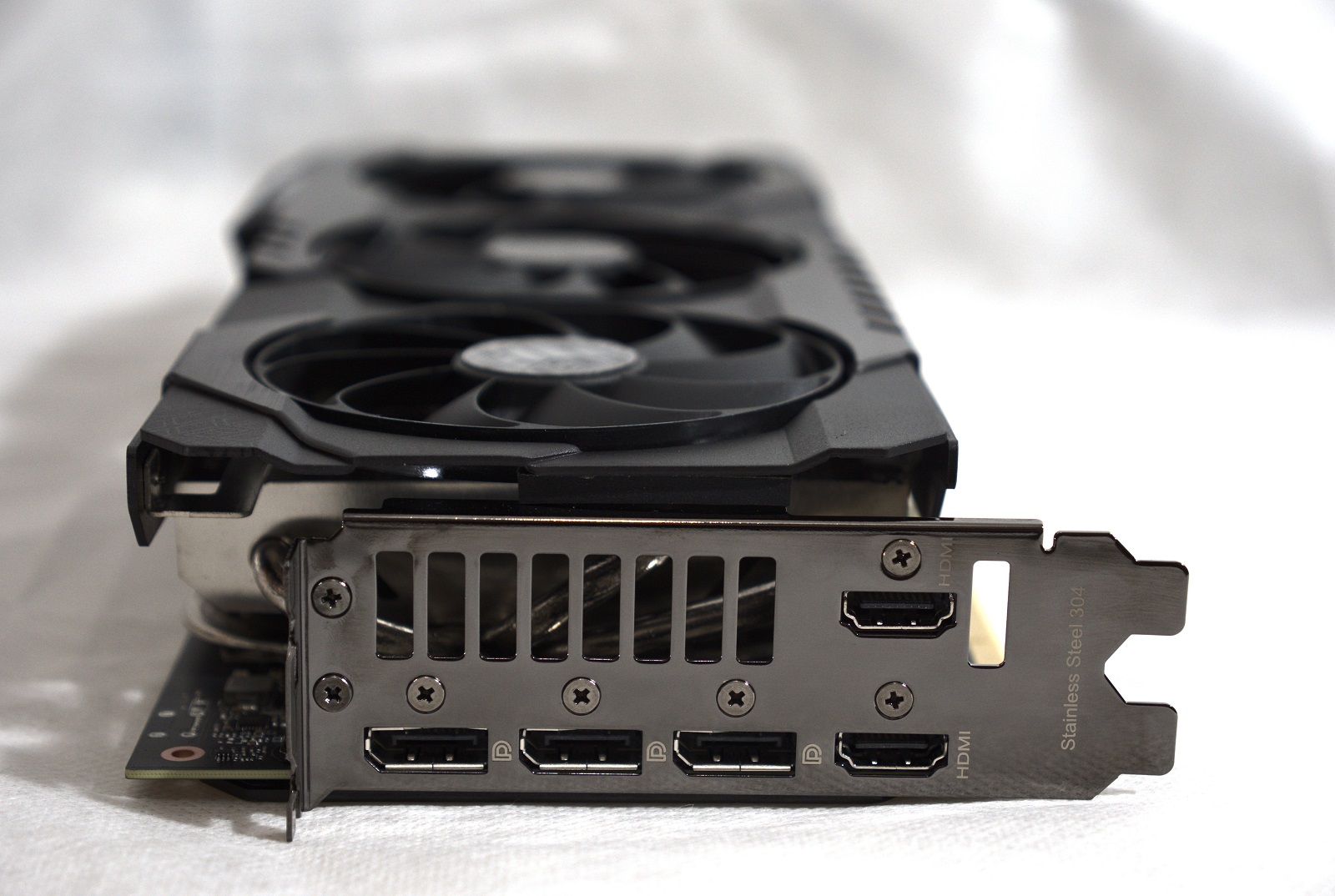 This video card has three ports of this type DisplayPort 1.4a together with two ports HDMI In the new 2.1 standard. You can select four of the five ports to use the screens simultaneously. 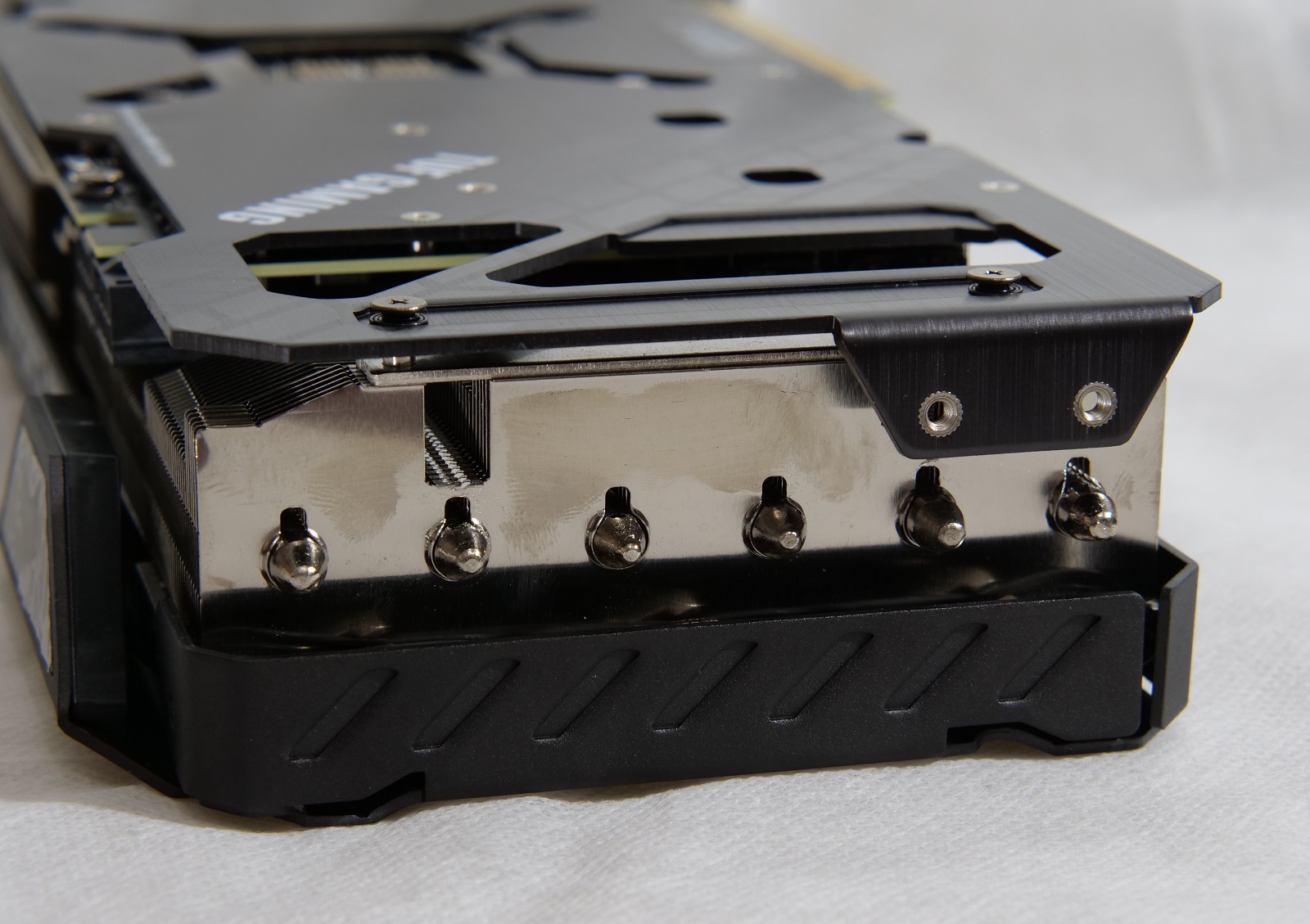 A core as large as the one on the RTX 3080 requires Cooling, And the TUF meets the requirement. This video card coats six tubes Cooling Lasting the entire length. Aluminum fans are the ones responsible for dissipating heat from there.

This video card also has an RGB bulb that can be controlled using AURA's software Asus.

The Ampere core is manufactured in an 8-nanometer Samsung process. In fact, unlike many expectations to create in the popular TSMC plant, she chose NVIDIA At Samsung's factory and a relatively fresh production line that has recently become in demand (we know that the new Snapdragon for smartphones is also going to be produced there). The GA102 graphics core area on this video card is 628mm square, an area that is considered to be relatively large, but still lower than the 754mm square we saw in the TU102 core on the RTX 2080 Ti. However, the number of transistors has risen from 18.6 to 28 billion (!). The transition from TSMC's 12 nanometer process to Samsung's 8 nanometer allowsNVIDIA Produce graphics cores with tens of percent higher transistor density.

This video card uses a new micron memory called the GDDR6X. This memory is created to serve the large information traffic requirements of the new video cards, and currently exists only in the video cards of NVIDIA Models RTX 3080 and RTX 3090. The memory speed in this video card is 19Gbps ​​and is about 320BIT bandwidth. This results in a total memory capacity of just over 760 GB per second. Depending on the composition of the memory controller, on each 32BIT there is chip זיכרון One of 1GB, so the total graphics memory volume is 10GB. This is an addition of 2GB compared to RTX 2080 Super The same graphics card replaces the price tag.

The graphics core operating frequency is officially 1440Mhz, but this video card is expected to work at a frequency of 1785Mhz and even more during effort. We noticed that in the absolute majority of effort the graphical core of the TUF OC operates at a frequency between 1925Mhz and 1965Mhz. Definitely respectable.

Without adding words, it's time to move on to the requested part of the review, straight to the performance tests.