Especially ambitious projects on the mass funding site Kickstarter They are nothing new. It is well known that many of the games that start there do not even finish and go out into the world at all, and a good many of those who come out find it difficult to keep promises.

In 2015, a group of young developers from France decided to try their luck at Kickstarter with a particularly ambitious project that was known to grow in size and go for the development of an ARPG (Action Role-Playing Game) title with an isometric look. At the time, the game was called Umbra And it is based on the engineCryEngine. The small team managed to raise over $ 400 (!) Thanks to the public's hunger for a new addiction, a game that will fill their time during a dry period in the field.

Five years ahead, and now under the name Wolcen: Lords of Mayhem, Wolcen Studio Studio has about 40 employees and has finally launched the anticipated game

The goal is simple - excellent graphics and combat, a wide variety of game modes without ready-made templates, fast and satisfying action. The game went live on Thursday, but due to the great success and speed of development lately, server maintenance work is being done as of this writing.

Admittedly, Wolcen also allows full non-server playability, as well as full hands free tools for modifying and changing the game in this mode. Inline gameplay takes place without any changes for fairness and competitiveness.

As a big fan of ARPG games, I took the time of server maintenance to test the game with a host of hardware configurations to see which computer could handle it properly. 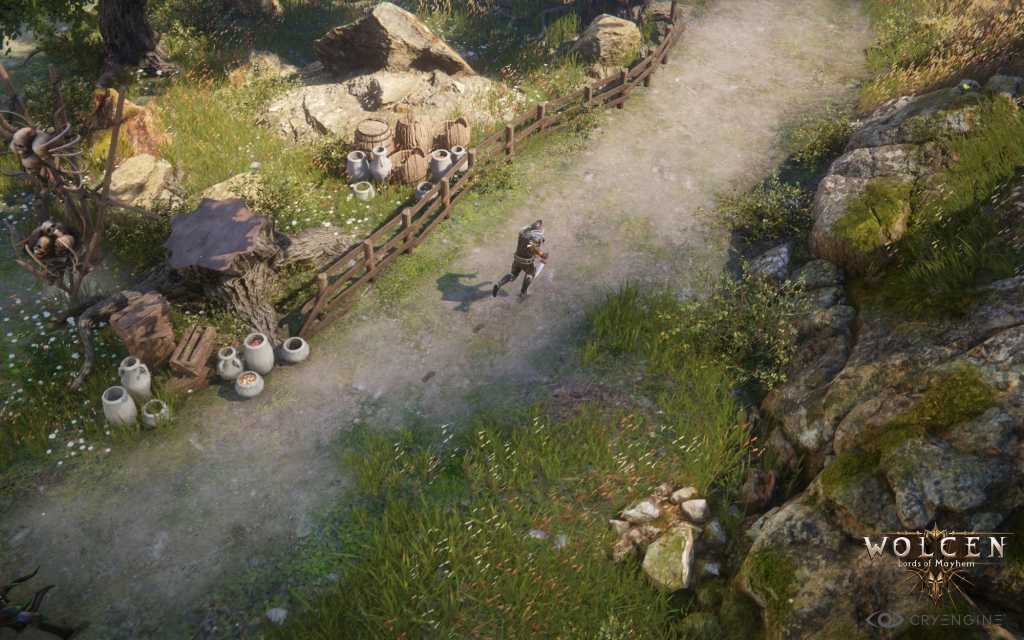 Visually, Wolcen is one of the most impressive ARPG games but for all the special elements and advanced graphics also a price in the form of a drought Performence We have a heavy burden on modern computer systems, especially given the small team behind this game and the engine (originally designed for first-person shooting games) to suit this type of game.

All operating systems from Windows 7 and above support the Wolcen game. We looked at a variety of titles in the title under the highest settings to see what performance we get at common FullHD 1920 × 1080 and WQHD 2560 × 1440 resolutions. A processor is used core i9 9900K video card exams: 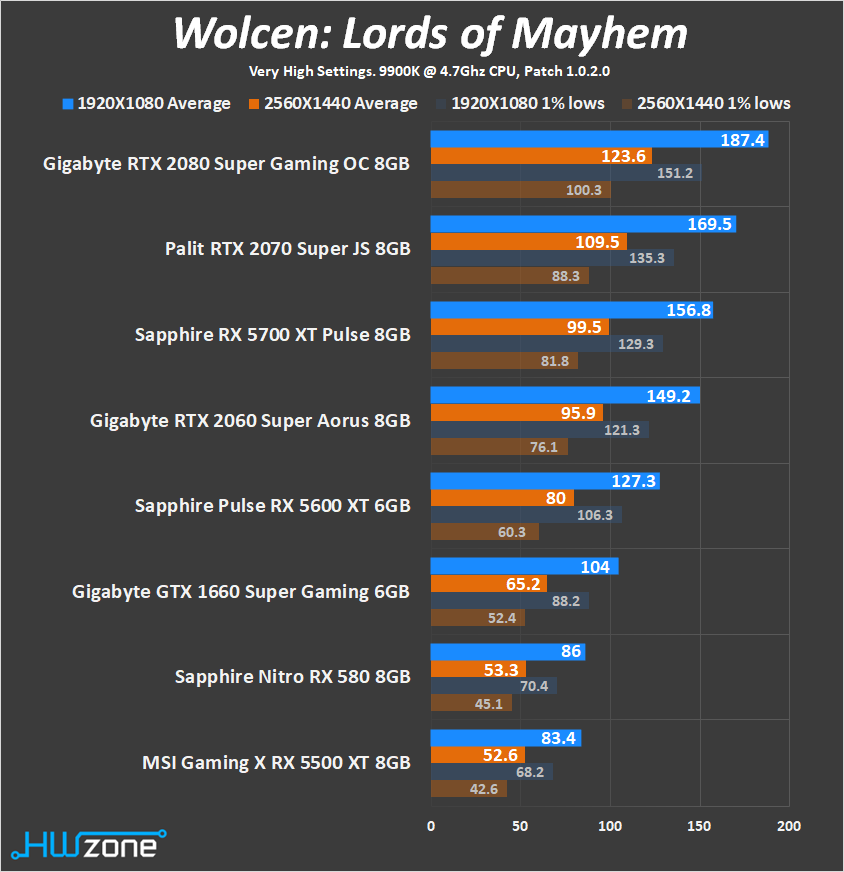 We explored the game offline in the first mission until arriving in Stormfall. This is a relatively easy but reliable part of the game exams. In later parts the game gets significantly heavier, so I would strongly recommend taking up to 30% of the performance seen here to evaluate Performence In later stages with more visual effects on screen.

In such a fast action game if you want Performence Good under FullHD resolution and maximum settings, the RX 580 8GB video card completely delivers the goods. Considering its relatively low price, and a recent drop in price for the GTX 1660 (non-Super), there is no problem enjoying maximum settings while maintaining 60 תמונות Per second throughout most of the game.

For 2560 × 1440 video card resolution Radeon The new RX 5600 XT does a great job with an average of 80 per second. Of course this is a relatively easy part of the game, so it's a good "insurance" against the heavier scenes below. Alternatively, it is also suitable for 1920x1080 high refresh screens. To enjoy all the worlds, it seems RTX The 2080 Super is up for a high-resolution task with high-refresh frequency adjustment, and that's part of the game, too. Future patches may make Wolcen easier. 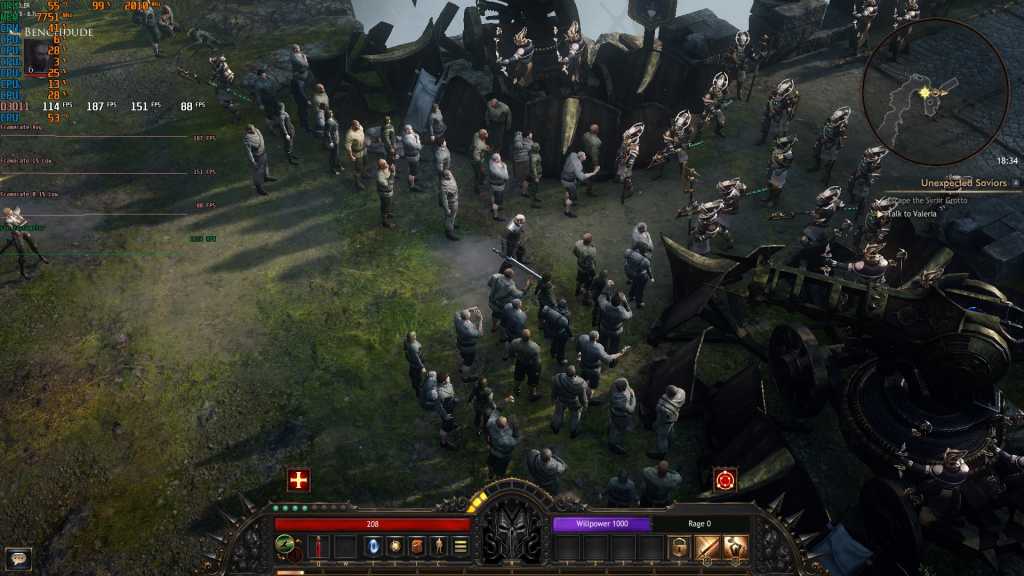 There is a scene at the beginning of the game that includes a large number of characters at the main entrance to the city. We noticed that this was a particularly heavy scene, and this is a great opportunity to see how Wolcen uses his processing resources with Processors Different.

It's always interesting to see how a relatively heavy game copes and distributes loads to modern processor cores. Given that the project started at a time when Zen's Zen processors AMD None at all, the load distribution seems to be relatively good on capillaries as high as theRYZEN 7 3700X.

We took the Geforce RTX 2080 Super and we ran the video card exam at FullHD 1920 × 1080 again. This is to see how many frames per second the processors under different settings can generate. 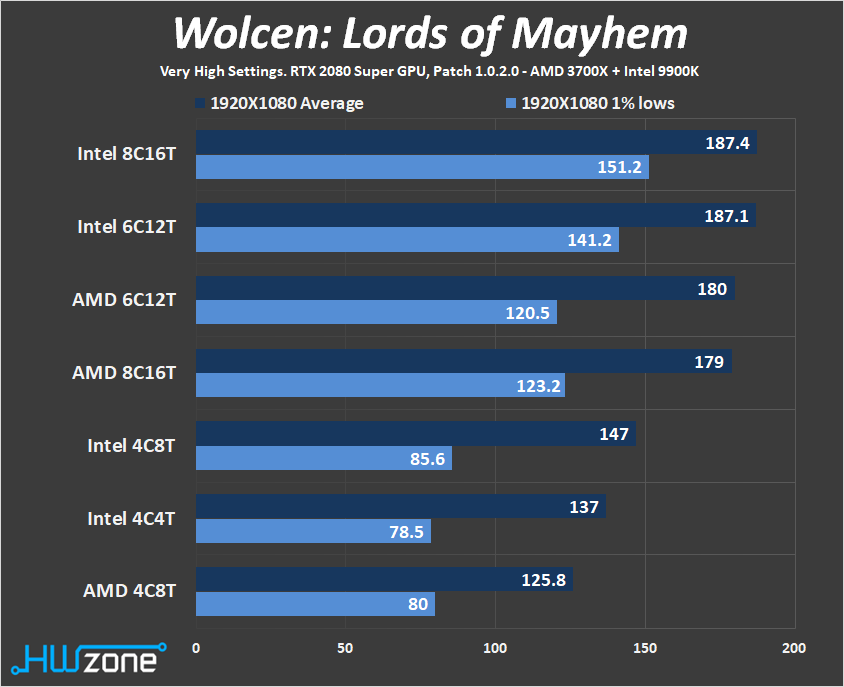 Between Core i9 9900K and Ryzen 7 3700X as expected, the 9900 K in its default settings leads to performance in Wolcen with both average and minimum frames per second. Turning off two cores doesn't matter too much, but slightly reduces the minimum amount per second. Processors Example core The i7 8700K represent the second in the list.

The Ryzen 7 3700X is performance-linked to what is practically considered Ryzen 5 3600X when the difference sits on standard deviation. Declining to only four cores, a significant drop can be seen Performence Maximum along with RTX 2080 Super. The maximum number of frames per second goes down to something more suited to video cards such as RTX 2060 Super.

Surprisingly, Intel's 4-core and 4-cap configuration (similar to Core i3 processors today) manages to slightly outperform AMD In 4 cores and 8 capillaries. This, given the processor Intel With only 4 processing capitals, most of the test spent 100% effort.

Myth Smashing Time - Notice that in a 4-core and 8-cap processor configuration Intel There is no single kernel that works 100% and yet the performance is significantly lower than other configurations. The fact that a processor does not include cores that are straining does not mean that its upgrade will not produce results Performence Improved.

So far with performance reporting for this interesting title. All that remains to be hoped is that those who love the genre will be able to enjoy themselves, and that Wolcen Studios will go on from here just upstairs to make the experience as high-quality as possible.


Wait, there's more!
Join To the group of zon And you can receive exclusive updates on various offers on the net, share content that you find interesting, consult with members of the site, and more - Join now!
Tags
NVIDIA AMD Steam Intel 2020 GAMES
Share
Facebook Twitter LinkedIn WhatsApp Telegram