מספר תמונות Mufflers give us more information about the models that are waiting for us in the new generation of the chip giant, beginning at the end of the year

A few days after we got first details about The following NUCs Its, a quartet of photos from the Chinese leakage site benchlife offers us another update on Intel's next products - Chips of the Kaby Lake family, Which, as is well known,core Seventh in number.

According to the details, In the field of mobile U processors The Core i3-7100U model with each 2.4GU core core processing core, with HyperThreading support but no support for the Turbo Boost 2.0, the Core i5-7200U with a pair of 2.5GHz baseband cores and a maximum 3.1GHz turbo frequency, And a Core i7-7500U processor with an 2.7GHz baseband cores and an impressive maximum 3.5GHz turbo frequency. All models will be provided with an updated HD Graphics 620 graphics core, with 24 cores, memory support DDR4, DDR3L memory support and LPDDR3 memory support - as well as a standard 15 watt thermal casing, and 7.5 watt miniature casing for ultra-compact systems. 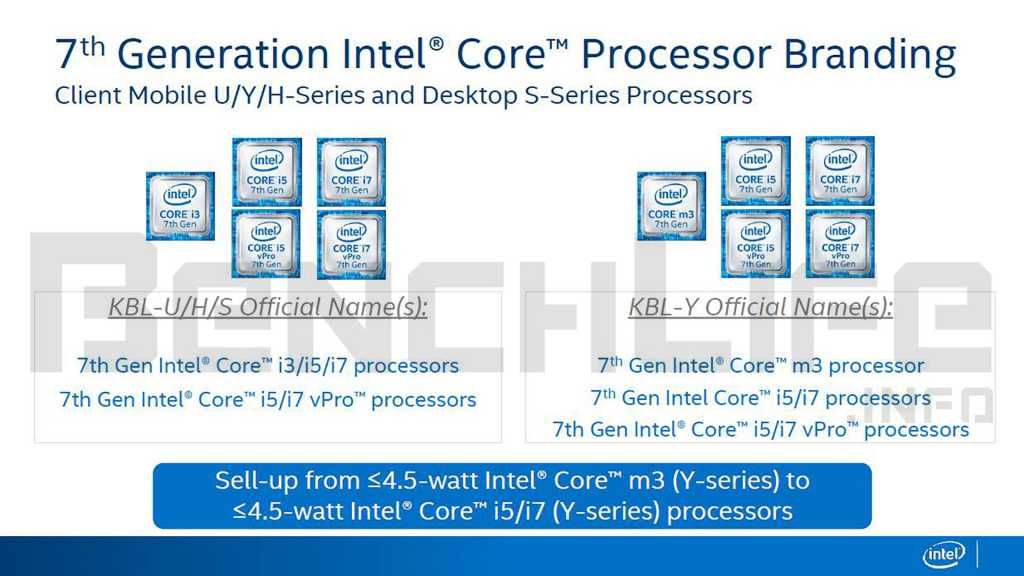 A more significant change is seen in the processor familycore m ultra-economical - this time you will be even closer to thecore When this time,core m3 will maintain the branding, while more expensive models will switch to thecore i standard. In other words, a model core m3-7Y30 will offer a pair of processing core at the base frequency of 1GHz only and a maximum frequency of 2.4GHz,core i5-7Y54 andcore i7-7Y75 will offer a base pair of processing cores of 1.2GHz and 1.3GHz respectively, along with maximum turbo frequencies of 2.8GHz and 3.4GHz respectively - all plus Core Graphics 615 graphics with 24 performance units as well (but practical frequencies that will be lower in almost any situation because of the lower thermal envelopes).

Intel wants to continue to blur the gaps for the average user between cost-effective mobile models and ultra-cost-effective models through updated branding, even though the potential performance is very significant - depending on the cooling efficiency of the purchased computer and the expected use of it. The more up-to-date users will be the ones who will need to explain to others the minimum differences between the new models and help them make the right and desired choice.

For dessert, in the sector of atomic processors to the budget market, this time we will see only models under the Pentium and Celeron brands (after the mobile models under the "atom Itself eliminated), with two to four processing cores in the updated and improved Goldmont architecture, but also non-update HD Graphics 500 and HD Graphics 505 core cores architecture Such as that of the C-Kaby Lake, And will offer 12 execution units and 18 execution units respectively.

Wait, there's more!
Join To the group of zon And you can receive exclusive updates on various offers on the net, share content that you find interesting, consult with members of the site, and more - Join now!
Tags
Intel Skylake Kaby Lake
Share
Facebook Twitter LinkedIn WhatsApp Telegram