Find out about the value for one of the high-end, high-end motherboards in the home GIGABYTE In the new generation of Intel

Another day, another motherboard - this time we cover the features and usability of the Z490 Aorus Master, a particularly advanced motherboard GIGABYTE That won't cost you cheap, but will give you a lot especially if you're an amateur Overclocking To the extreme.

Launched alongside Intel's 1200th Core generation, the LGAXNUMX is designed to address the dominance of the AMD With the Ryzen 3000 series at the top of the series core The i9 10900K has 10 cores, 20 capacitors and a mighty operating frequency of over 5 GHz. Of course, such a 14 nm silicon composition has a price and is mainly an extremely high power consumption. For this purpose, tablet manufacturers are forced to inflate the hardware they offer, and also inflate prices in most cases to cover expenses, especially given the uncertain period the world goes through when manufacturing these products.

Gaming brand Aorus of GIGABYTE Quite crowded between $ 200 and $ 300 in Z490 tablets, but beyond that the master board is the only one in its price range, the closest to it in terms of features is the Ultra. With a $ 390 pre-tax tag, and $ XNUMX after conversion, Motherboard This is considered a real premium alongside other motherboards such as the ACE's MSI And Hero's Asus. Of course there are significantly expensive motherboards, but a new category seems to have been created in recent generations of motherboards that appeal primarily to professional media bodies and overclockers. 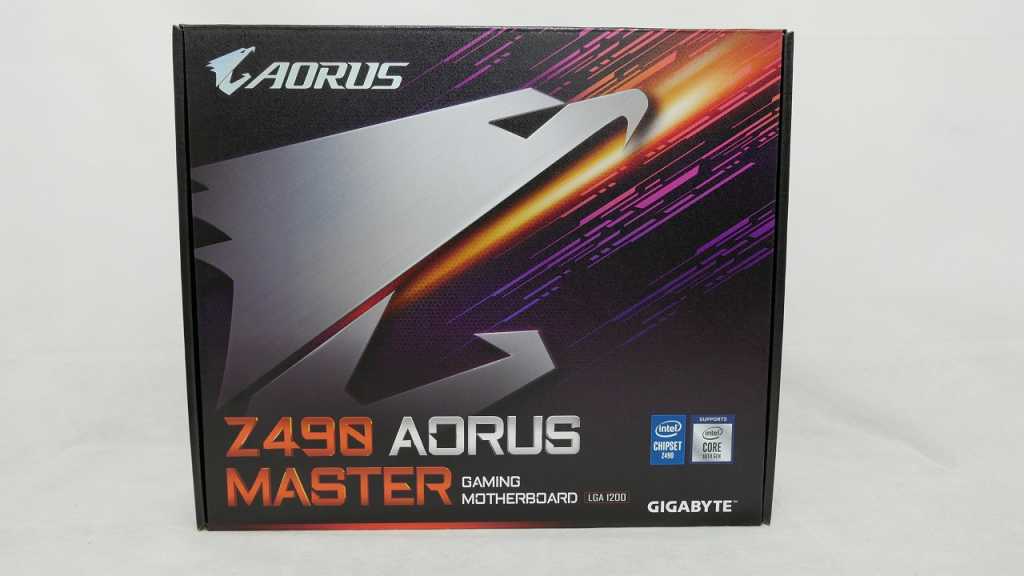 The general increase made at the price of a model of Motherboard From generation to generation, it does not come without any improvement in the hardware itself. It is important to me at this point in the review to note that the Z490 Aorus Master is more likeZ390 Aorus Xtreme confirms toZ390 AORUS Master. Thinking of it this way, the price remains quite similar to the set of features. 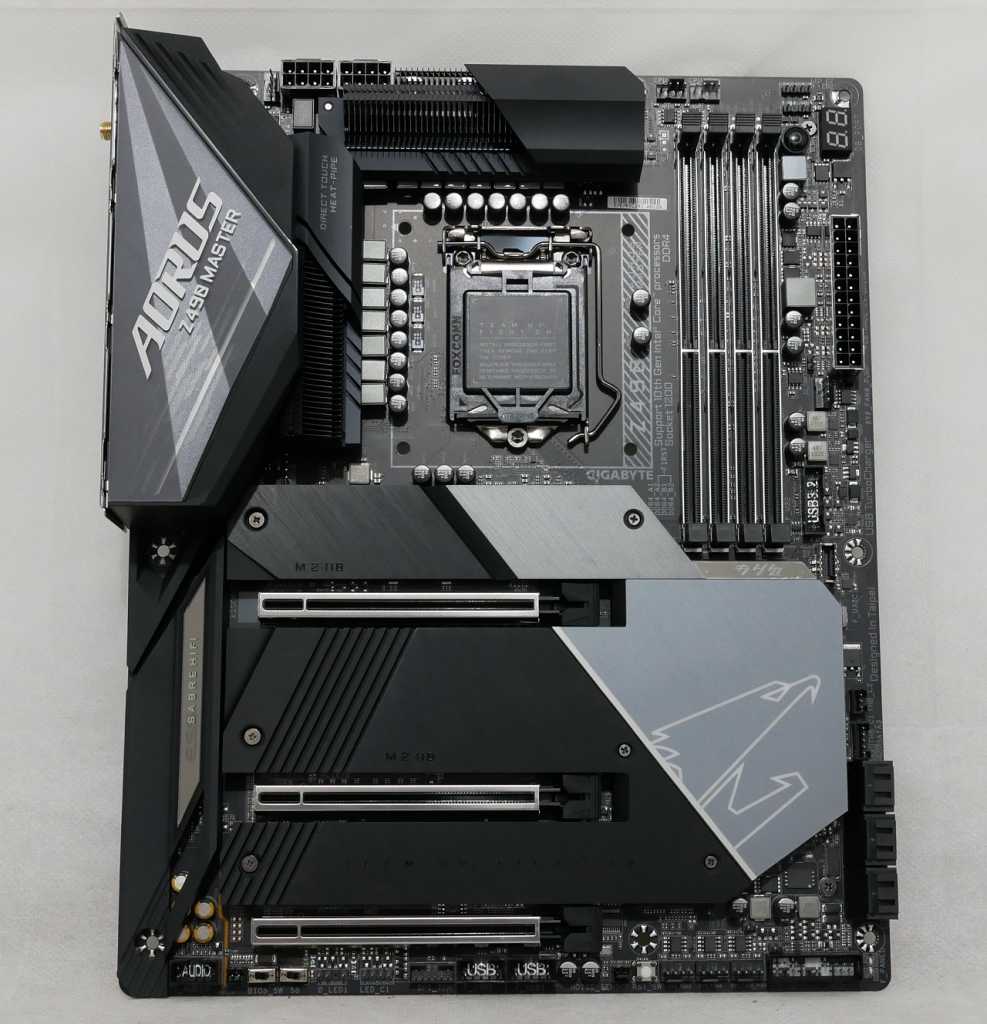 This motherboard configuration is ATX And it will fit any standard gaming case that supports the standard. There is a fairly serious aluminum child that covers the chipset and M.2 installation on the drives. In general, it is a heavy motherboard, with a little plastic on its left and the rest of it is cast aluminum. 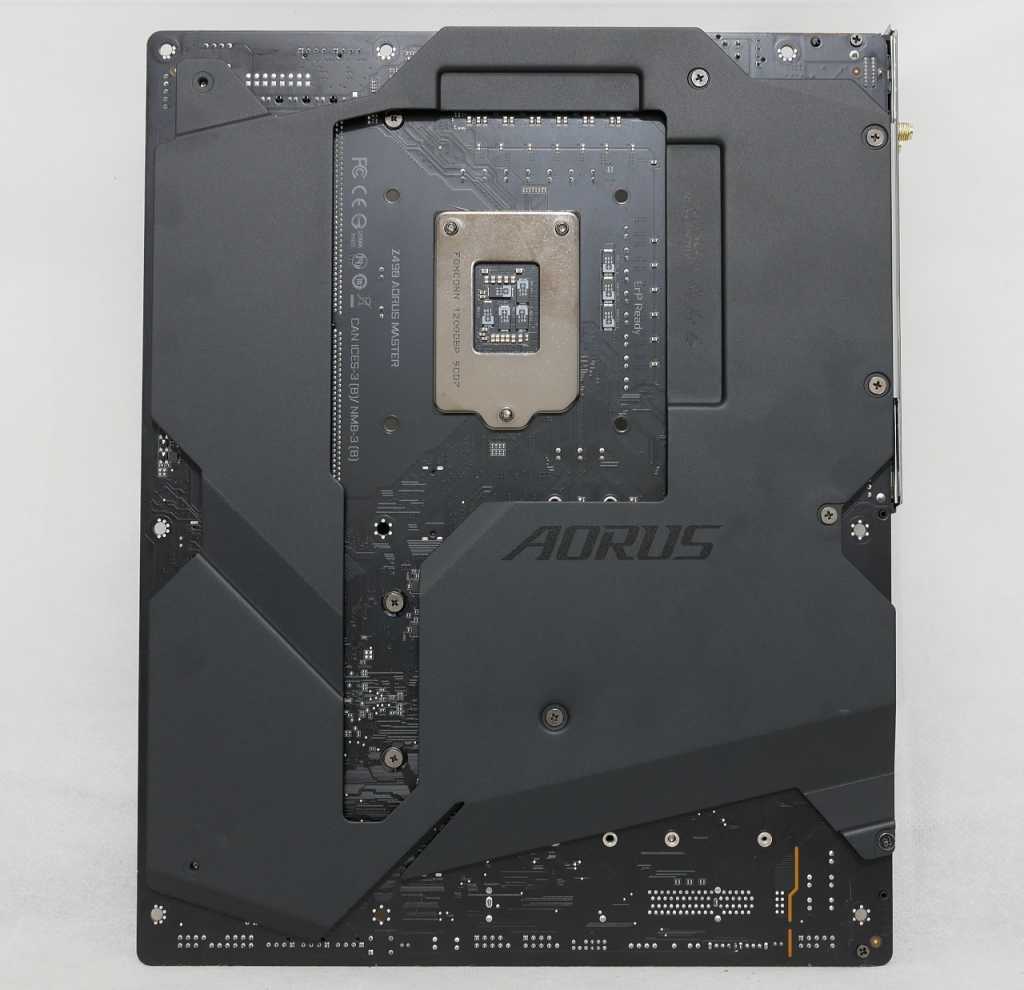 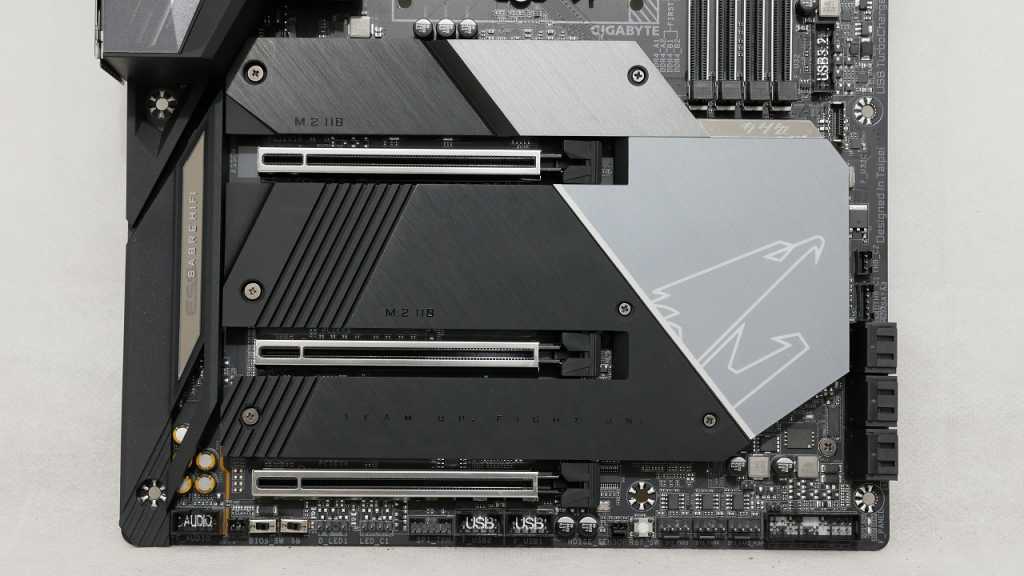 The array of PCI-Express interfaces on this motherboard is quite simple. There are no short, good or bad interfaces here, so it is not possible to install an expansion card over the top interface that is designed primarily for a video card. Instead, we get three M.2 interfaces. For the PCI-Express X16 interfaces, the upper and middle operate from the processor. The lower interface runs at the speed of the X4 and comes with the chipset standard 3.0. When launched Processors Supporting the faster 4.0 standard, the upper and middle interfaces will be upgraded to this speed. Until then, and using the 3.0th generation processors, these interfaces are also in the old and familiar XNUMX generation. 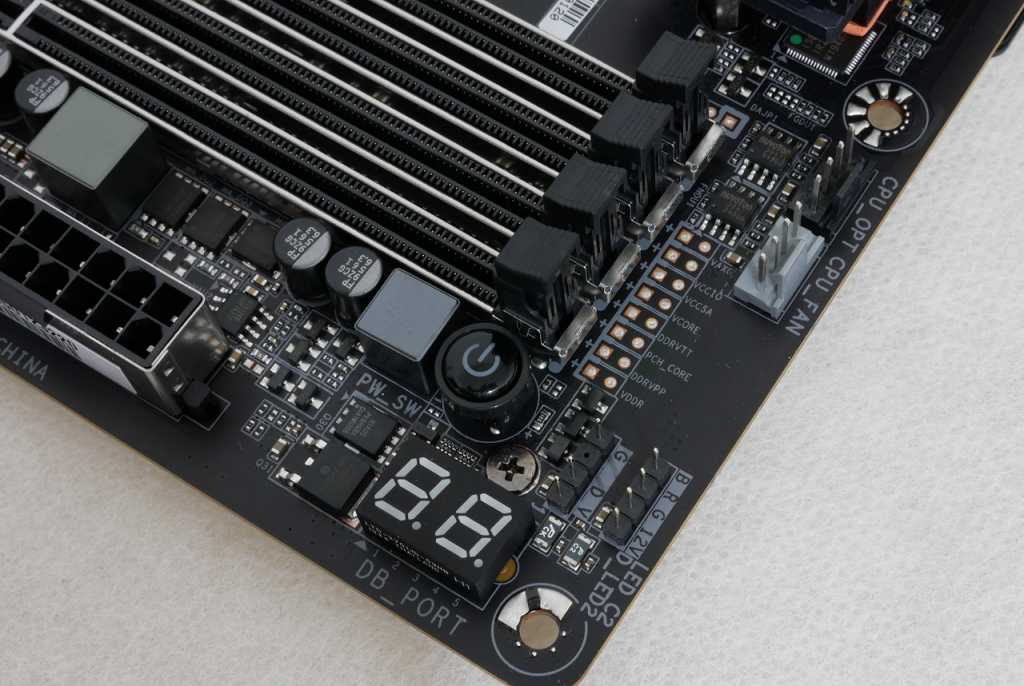 At the top of the motherboard are tools for overclocking and debugging. They both have a two-digit index for troubleshooting by index, the power button, and, in my opinion, most important - points for testing voltages for components using a multimeter. My only complaint about this feature is that I would be happy if instead of points on the board were brackets where it was easy to place multi-surveyor pins instead of touching the board. 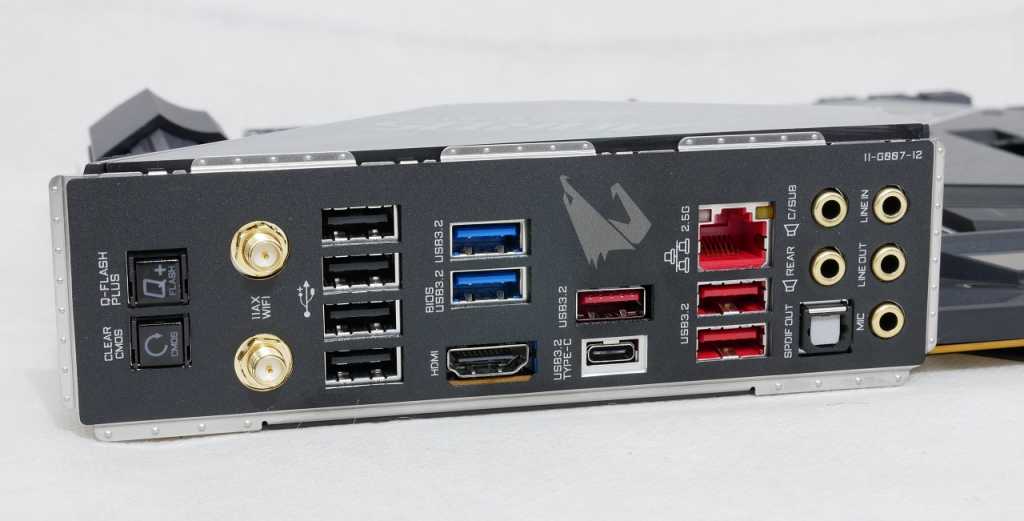 This motherboard has audio outputs on 7.1 channels along with an optical port that come from the Realtek ALC1220-VB controller. The network input is at 2.5Gbps through the i225-V controller Intel. Of the portsUSBTwo are 20Gbps, two 10Gbps, the two blue ports are 5Gbps and the four black are ports USB 2.0 standard. There is a single HDMI 1.4 standard interface for those who want to use a built-in graphics core. The antenna connectors come from a new AX201 Wifi card. This card also includes Bluetooth In the 5.0 standard.

Two debugging-related buttons are reset bios, and bios burning using Gigabyte's Q-Flash Plus tool. What's great about this tool is that all you have to do is insert an on-disk drive into the blue USB interface labeled "BIOS", and press the button when the computer is off. The motherboard will pull a new Bios version and burn it to it, even when there is no memory or processor at all. This feature will be very useful in an era when motherboards will be sold alongside next-generation processors without bios updates. Users will not have to obtain Processors Previous to update. 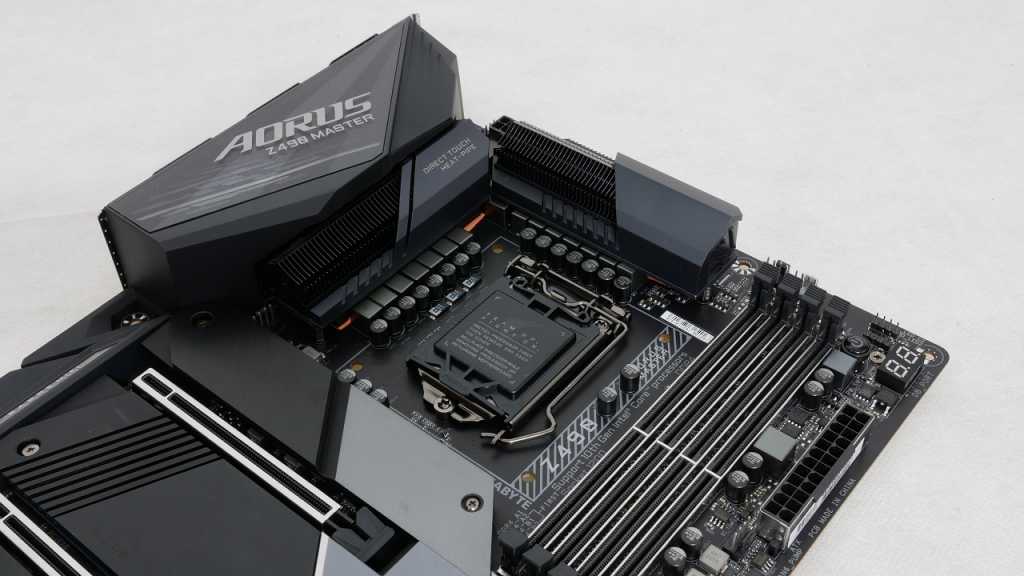 The Z490 Aorus Master supports memory DDR4 Up to 128GB and up to 5000Mhz. It is important to note that these two cannot exactly happen at the same time. Frequency support increases as there are fewer populated interfaces and fewer chips per stick זיכרון. The likelihood of the motherboard reaching the highest frequencies of memory will increase if there are two sticks, each chip being printed on one side only (what is known as Single Rank). If a user decides he uses four 32GB high-capacity sticks each, then reaching 4133 Mhz is also unlikely to be easy at all. Speeds like 3600Mhz would be quite easily achievable. 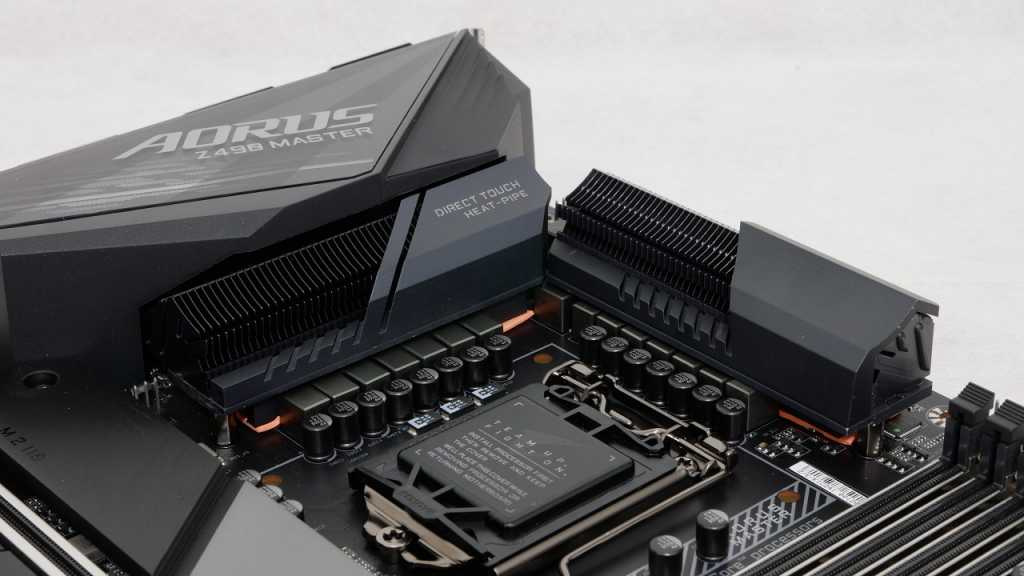 The power supply system for this motherboard's bracket is one of the best in the LGA1200 bracket, and is built primarily from 14 stages of 90A for maximum current capacity of 1260A for the processor cores. There are also steps for the other mornings, but their effect on Overclocking Quite nil.

In addition to this meaty system, there are also my bodies Cooling Having an extra large surface area. Currently, there is no more efficient method of dissipating heat from installations than using aluminum fan and copper pipe. GIGABYTE Implement this without any problem at all. 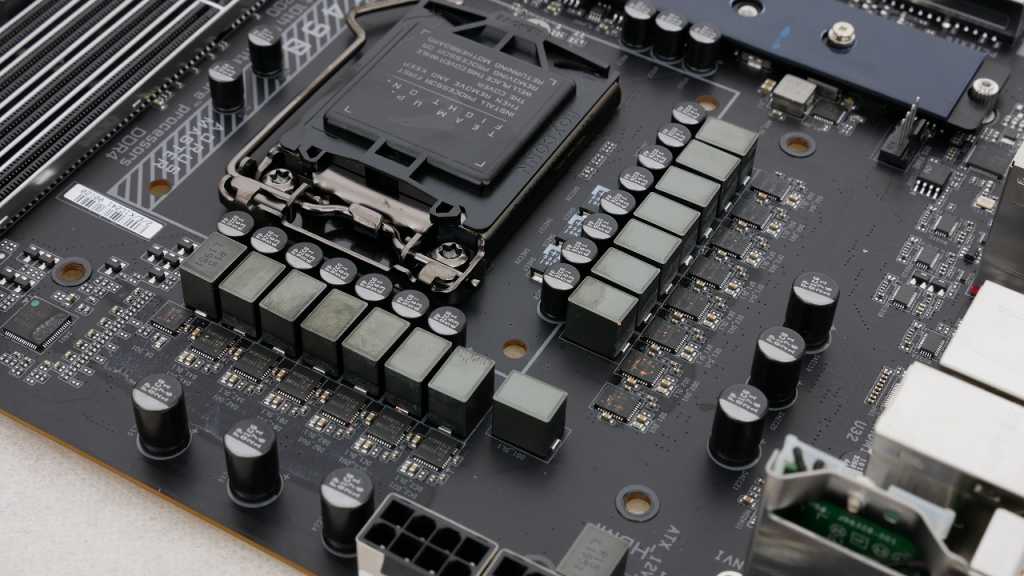 The processor filtration system is also quite padded, and current flows through the coils to solid capacitors, and thence to polymer tantalum receivers. 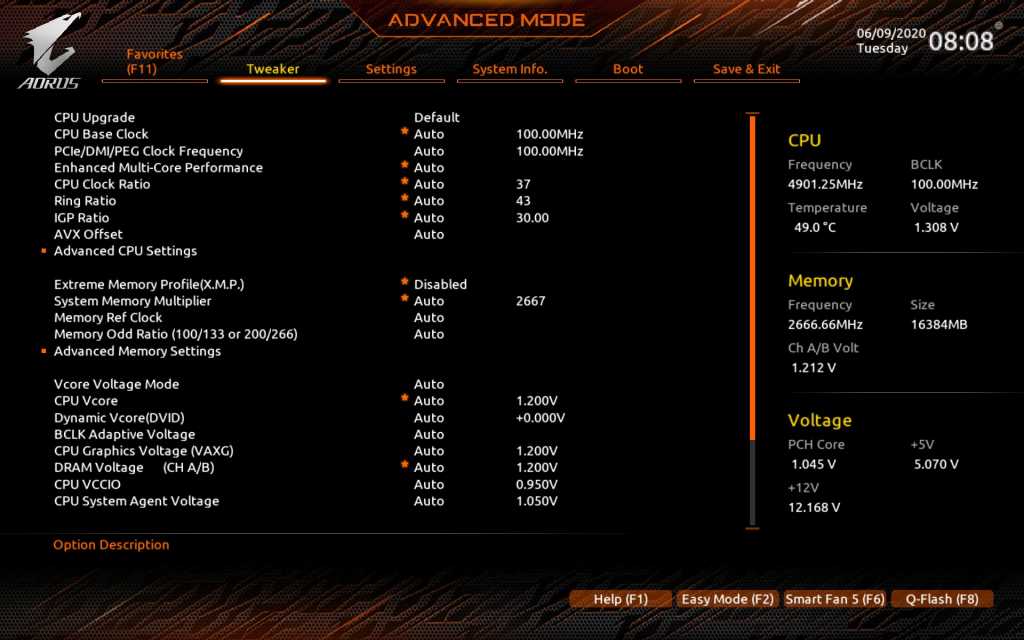 The Z490 Aorus Master bios volume is directly in advanced and good condition, as it is a board suitable for an advanced user. This is the same bios interface that we have known since she has smartly decided GIGABYTE Update it towards the end of the Z390. This is the most polished and laid-back bio GIGABYTE To this day, it can be argued that standing side by side with other bios such as this one AsusThis is a claim that was very difficult to make just a year ago.

The favorites tab is the one that I recommend ordering with the most common settings so you don't have to go anywhere else if you want to mess with the same settings. The Master is rich in tuning settings from the most important to the most negligible, and is definitely ready for extreme cooling under Cooling Below zero. 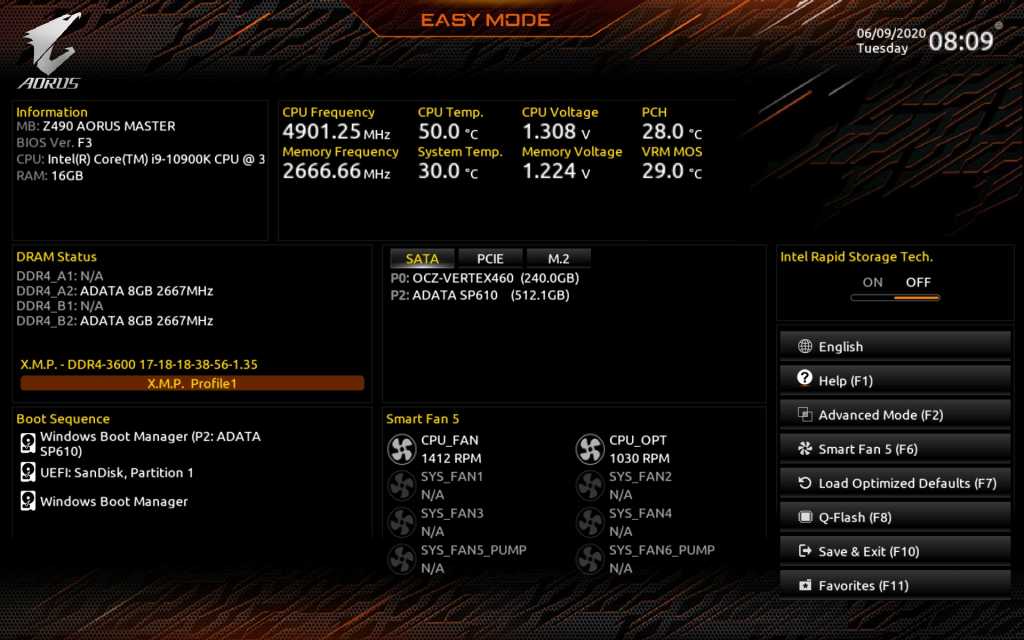 The simple situation also exists, and can be set by default when uploading to BIOS. This screen shows all the essential information about the system such as temperature, bios version, storage devices and memory frequency including setting the XMP profile and fan profile. Simple, resting, working. By the way, tuning the fans with profile at GIGABYTE It is the easiest and best in my opinion of all motherboards today, even more than the improved one of MSI.

Of course it is impossible without RGB. This motherboard comes with controllable RGB bulbs on the chipset and back panel. RGB Fusion 2.0 software GIGABYTE Stable and easy, with my only complaint being that it takes a few seconds for each setting to take effect, and beyond.

The effect is not stingy, and in good taste. GIGABYTE Did a fantastic job with the aesthetics of the Z490 AORUS Master.

We signed a first round of motherboards in the Z490 chipset and it included cheaper boards alongside a particularly expensive side, and I think I can cautiously say that the Z490 Aorus Master is my favorite. Company GIGABYTE She is perfectly in her motherboard, she is in the position to produce the most mature, stable, and highest quality products she has ever created and sees it.

We are hoping that the days of experimental and weird hiring are over, as existing is excellent. The days of the strange rainbow colors and the plastic surgery experiments she gives are over GIGABYTE For its advanced panels, the modern look, relatively minimalist and dark combined RGB In good taste, it is at least in my opinion the best look ever made by this manufacturer's boards.

Gigabyte selects a good interface, a good amount of interfaces, and combines it with a processor power supply system with Cooling The most important stabilizers in the price category between the various motherboards. It’s hard not to justify justifying Motherboard Like the Z490 Aorus Master in case anyone wants the most advanced motherboard for the LGA1200 bracket without reaching alarming prices. Of course, the price of about two thousand shekels is a heavy case for justifying a purchase Motherboard, "It Motherboard"After all," but if there is a demand, there is an unparalleled supply and quality.

It's hard to find an area where this motherboard doesn't get a grade of at least "very good." This is a very strong option against the competitors in the price category of the premium panels for the LGA1200 bracket. A combination of a generous set of interfaces, overclocking and control tools, advanced build quality and a headache-free user experience makes the Z490 AORUS Master of natural selection, if the price does not deter you.