We are at the peak of the summer season packed with computer and hardware purchases (ask the stores if you can get them at this load), and the gaming world of laptops continues to accelerate. This summer, the graphics core maker took advantage NVIDIA The opportunity to attack and decided to upgrade her existing video cards.

RTX series NVIDIA Received a disagreement when the price tags attached to the various video cards were higher than usual. Now, he does NVIDIA One step forward in providing greater value for the price by upgrading the video cards to Loo

Earlier we saw the very moderate upgrade of NVIDIA to RTX 2080 with version The RTX 2080 Super And now it is the turn of the significantly cheaper and popular video card, theRTX 2070. 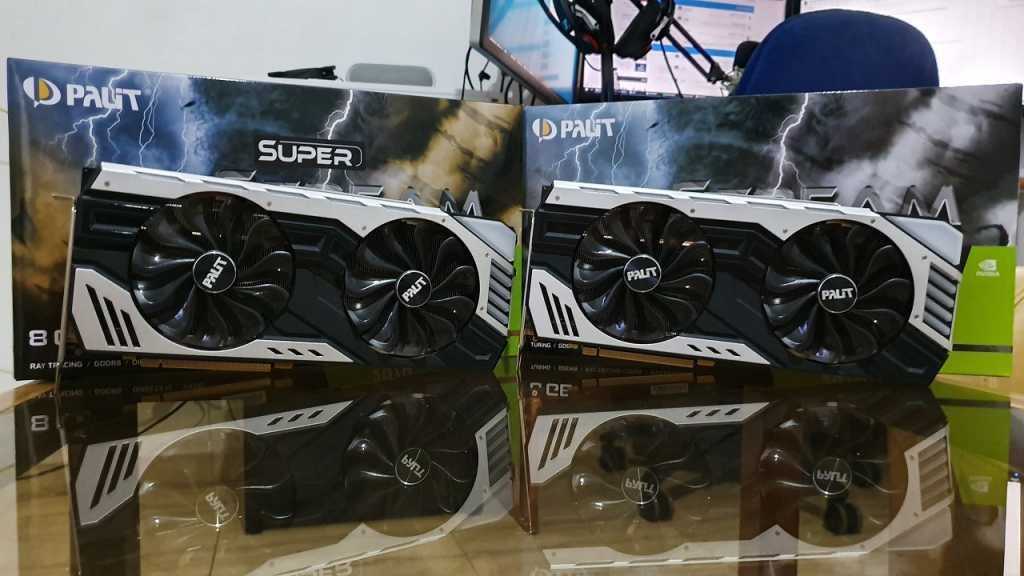 Brief explanation for confused: Palit has had an advanced card series called Jetstream for several years now. The card uses massive cooling and a very advanced printed circuit board. The overclocking version of the ticket was sold as Super Jetstream. After the new branding NVIDIA In Palit something had to be done so that the new video card would not read RTX 2070 Super Super Jetstream therefore outsourced its Super and shortened the Jetstream to JS.

Technical changes between these two graphics cards - is done in the graphical core itself from TU106 to TU104 which is the graphical core used NVIDIA On RTX 2080 cards. This is due to the increase in CUDA graphics weathering from 2,304 to 2,560 Processors Such. 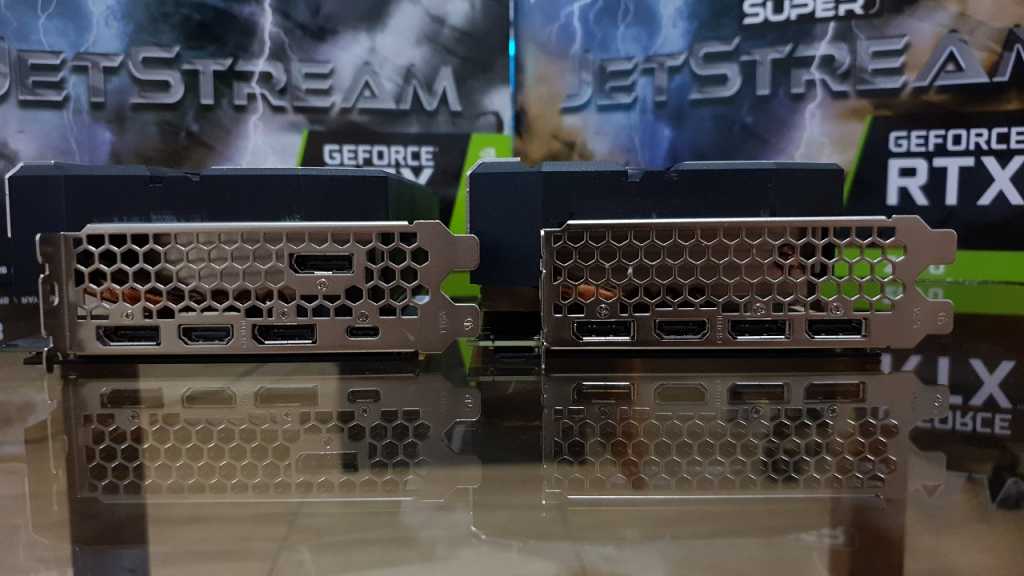 Something interesting I assumed was that in the Super model, Palit downloaded the Type-C interface on the VR Binoculars card. This is not a commonly used interface, so I do not consider it a problem. Besides, three interfaces DisplayPort 1.4 and interface HDMI 2.0 as usual. 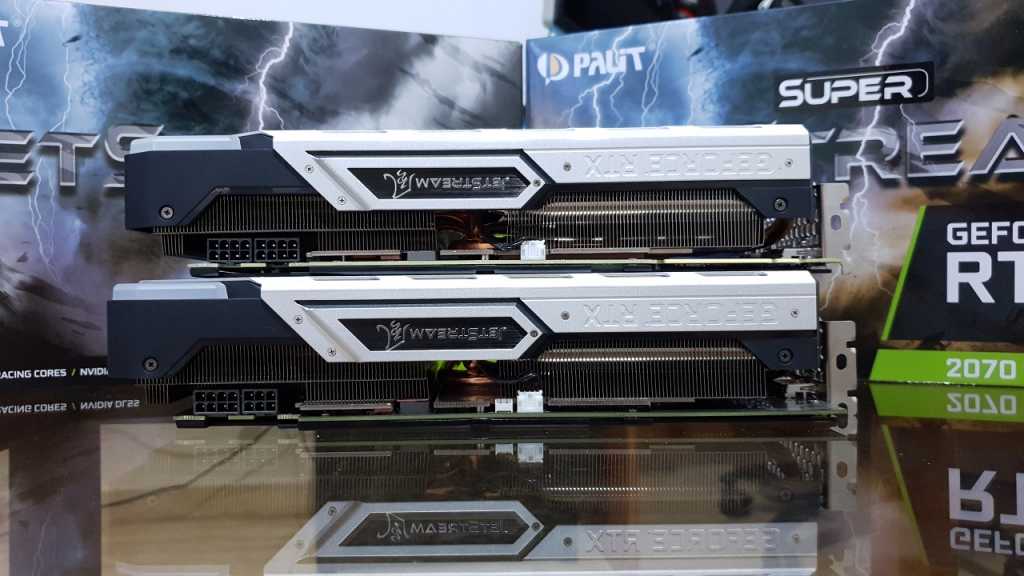 The dimensions of the video card remained similar. Card length is 29.2 inches. 2.5 Thickness Thickness of Motherboard, So you need to ensure proper spacing according to your computer system. 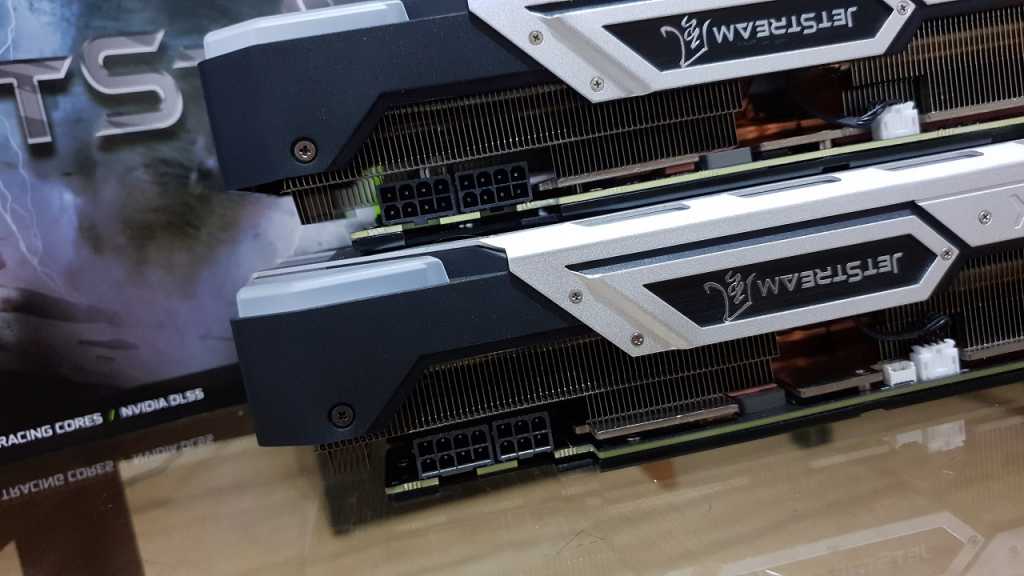 The requirement for electrical connections varies slightly from the standard RTX 2070. The Super has two 8PIN connections that it needs from the power supply. I suppose at some point this video card was designed to be RTX 2080, as it uses exactly 100% of the RTX 2080 components, but has undergone a burning bios Processors In order to be marketed asRTX 2070 Super. 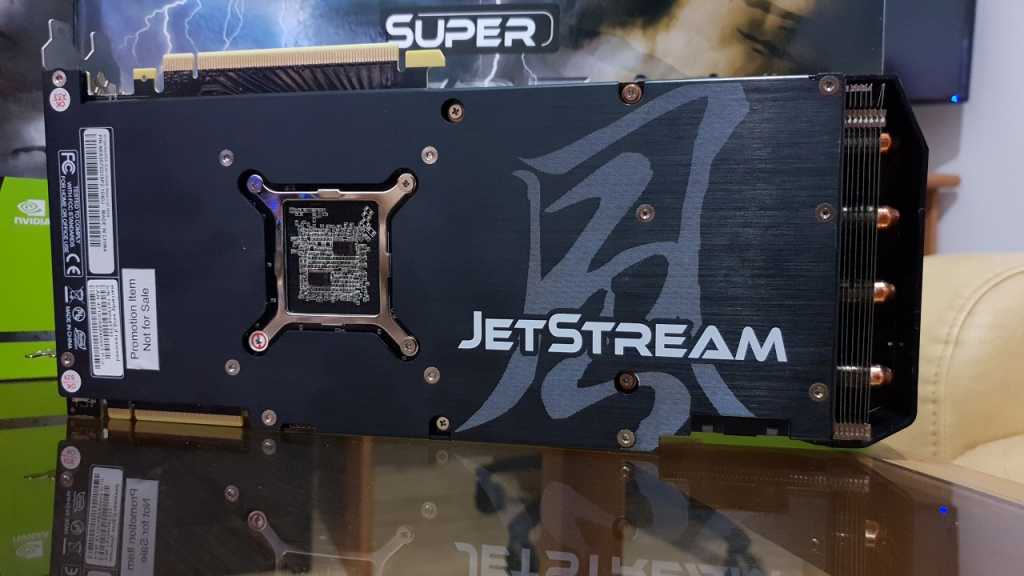 As with the other models, there is also a back plate used to protect the printed board and connected with thermal pads to the hot parts on the back of the card. 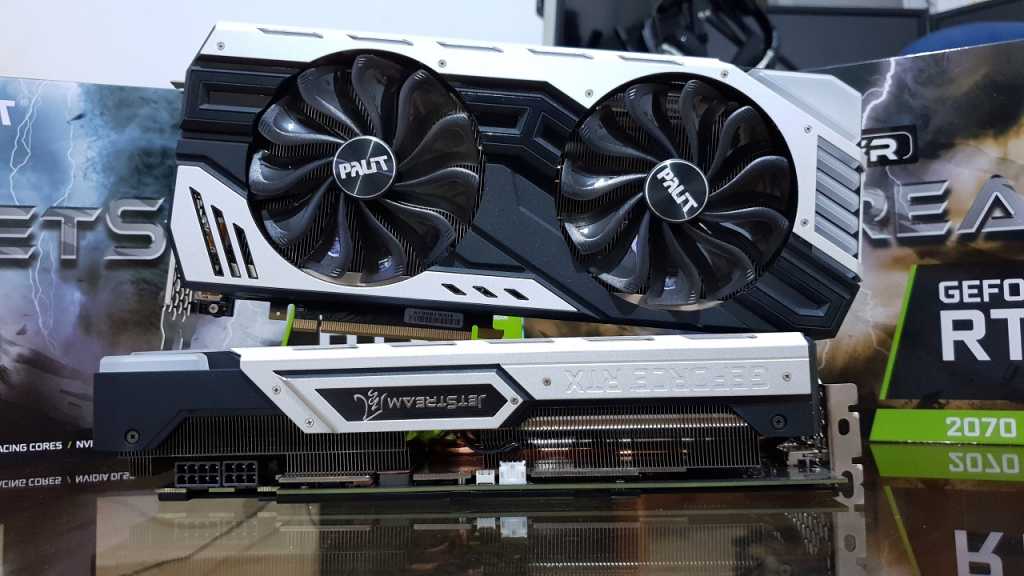 The video card cooling remains the same as the other Jetstream models between cards RTX. 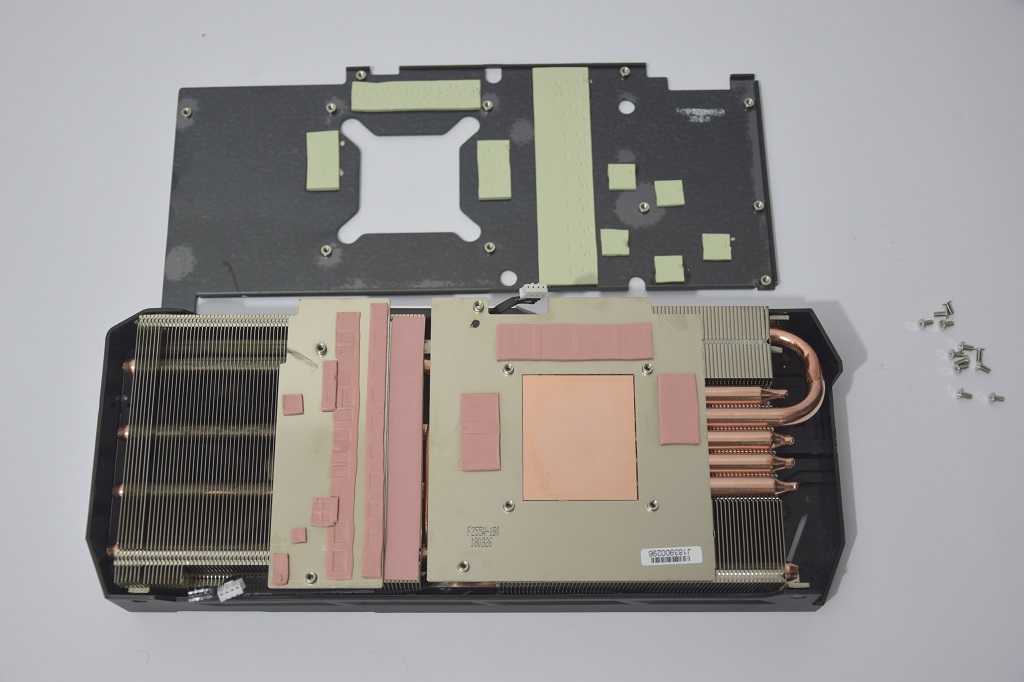 This is simple cooling and for the matter based on five copper pipes connected to a cast copper base. Along the card are many aluminum fans that catch the heat and a pair of fans that hum it in the air. 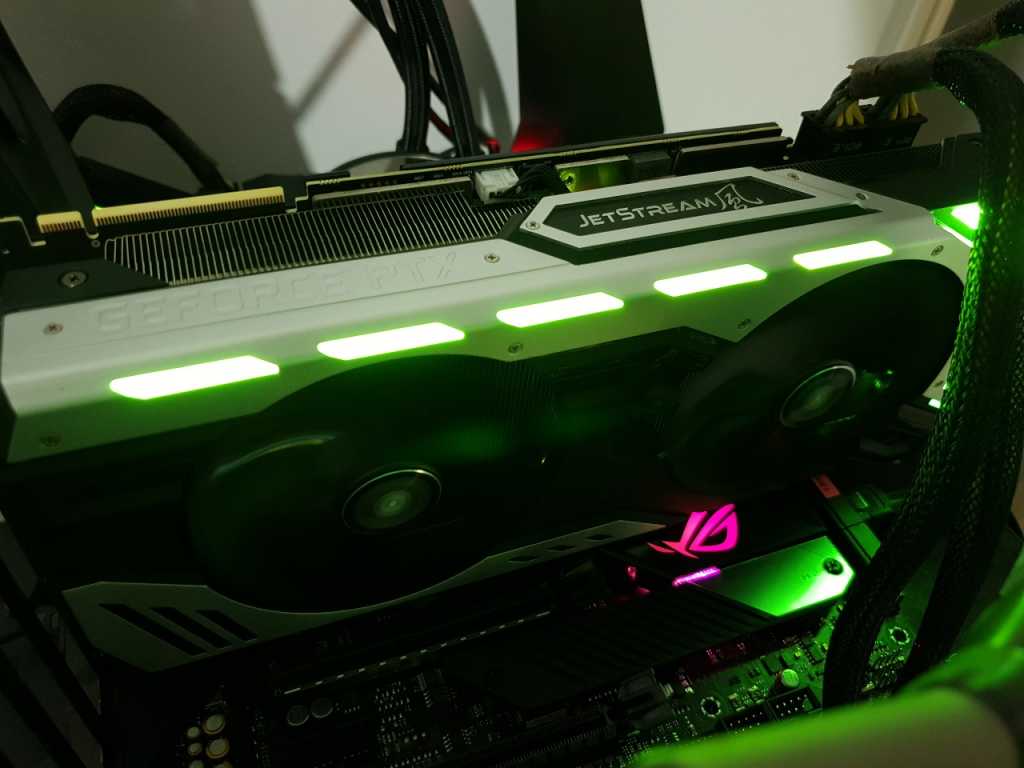 Like any advanced hardware product today, the Palit RTX 2070 Super JS also has lighting RGB Quite powerful and controllable by their dedicated software.

Today, the main competition for this video card is theRadeon RX 5700 XT. This is a video card that costs only 400 dollars compared to the 500 dollar that costs RTX 2070 Super so the importance of performance is quite high.

It's time to go through the performance tests to see how this video card works. 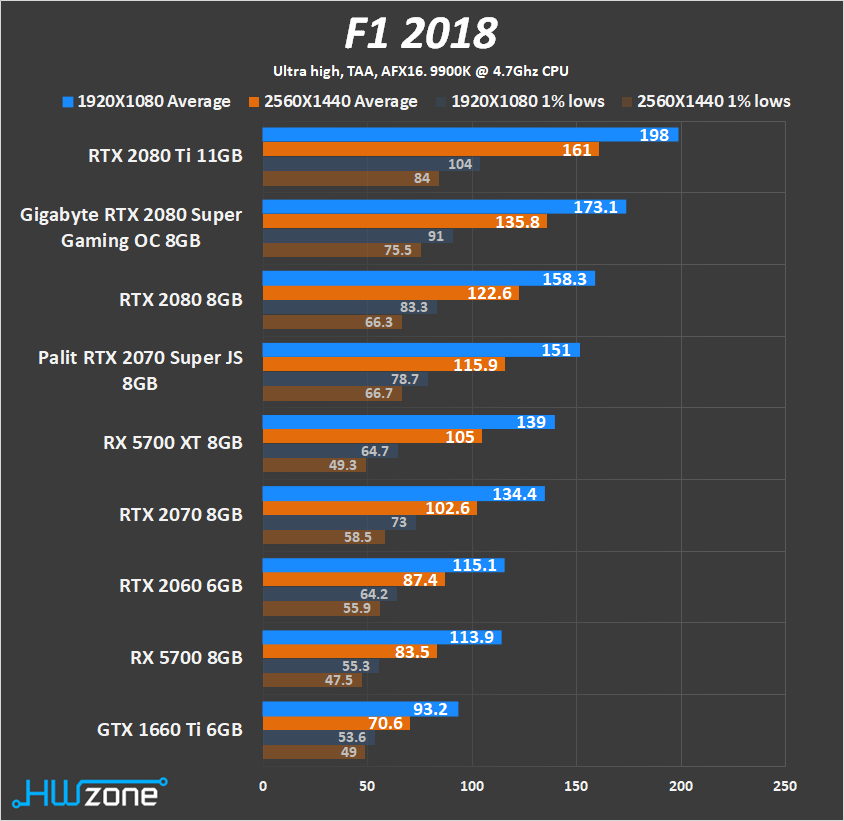 In the racing game F1 2018 the video card is adjacent toRTX Standard 2080 and slightly above RX 5700 XT, mostly in minimum frames per second. 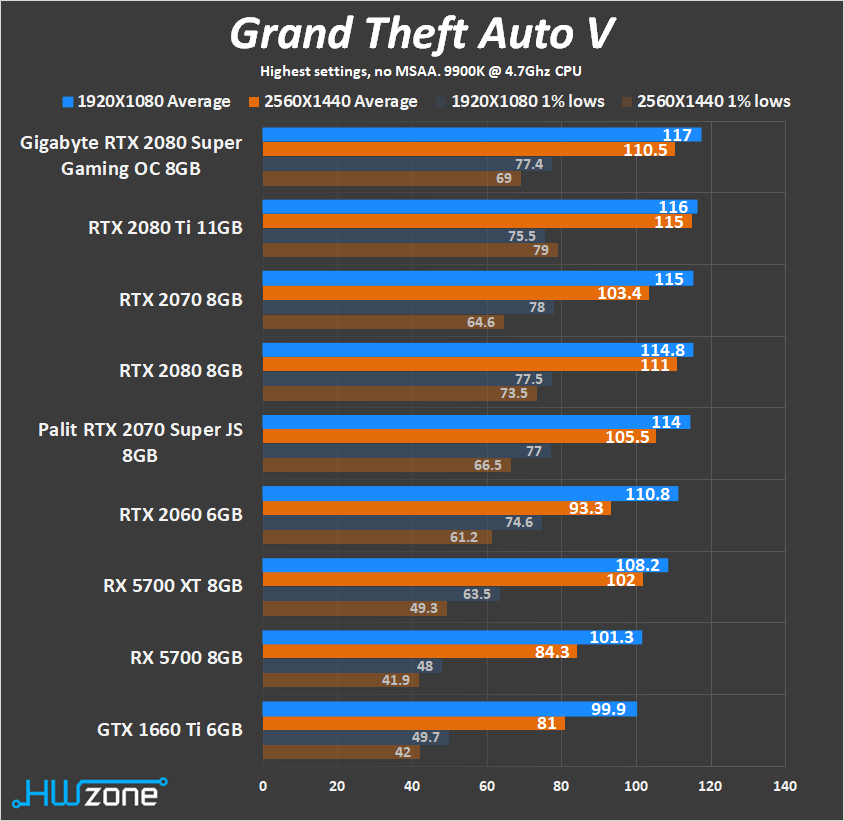 We still include the GTA V Relatively outdated technically, but popular. Among all the graphics cards from RX 5700 XT and above, the performance difference is not very high, but atRTX 2070 Super Minimum frame size is stable and higher, leading to a smoother gaming experience. 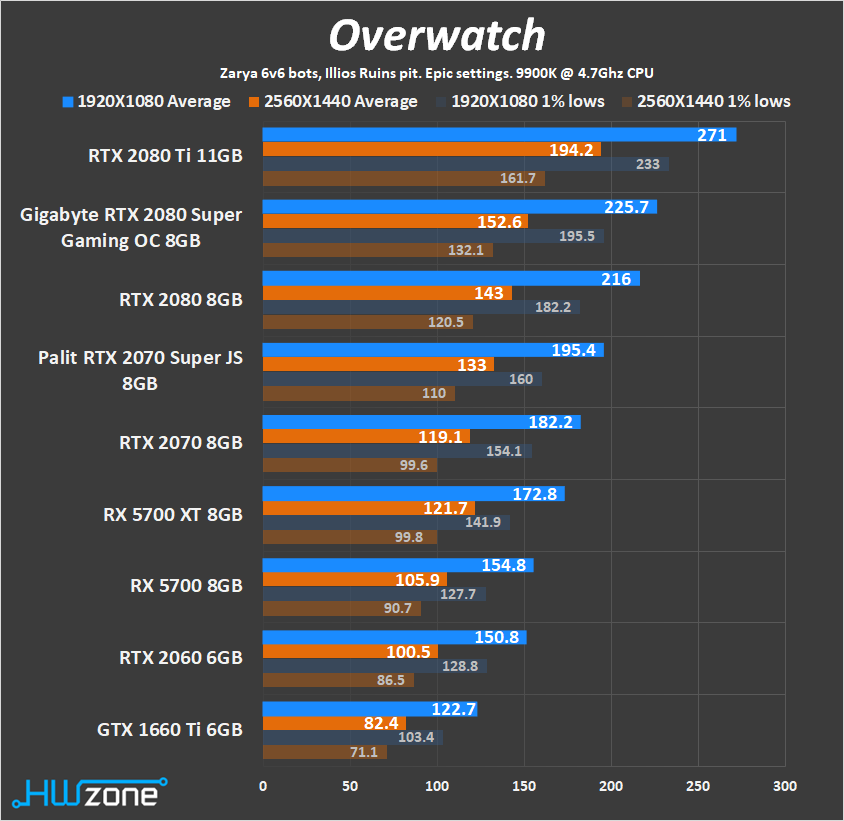 In the game Overwatch, which is currently undergoing interesting game changes and is expected to remain relevant for some time, the RTX 2070 Super JS works great and produces Performence Quite close toRTX Standard 2080. 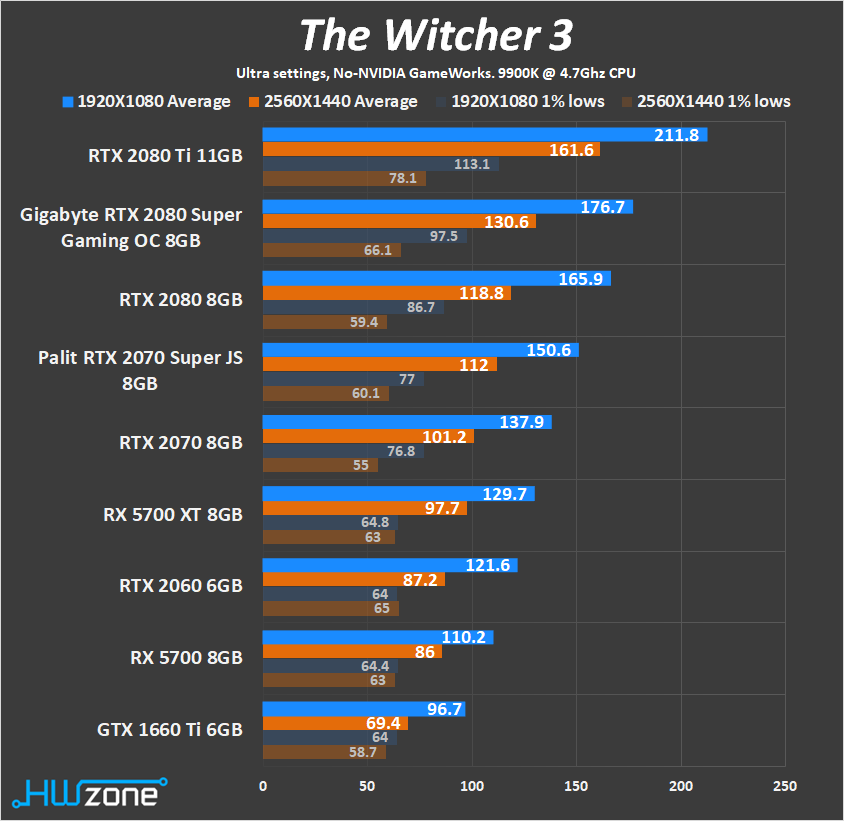 The game The Witcher 3 over time becomes one that becomes quite friendly to 144Hz screens, especially on the more advanced video cards. also here RTX 2070 Super JS linked toRTX Standard 2080. 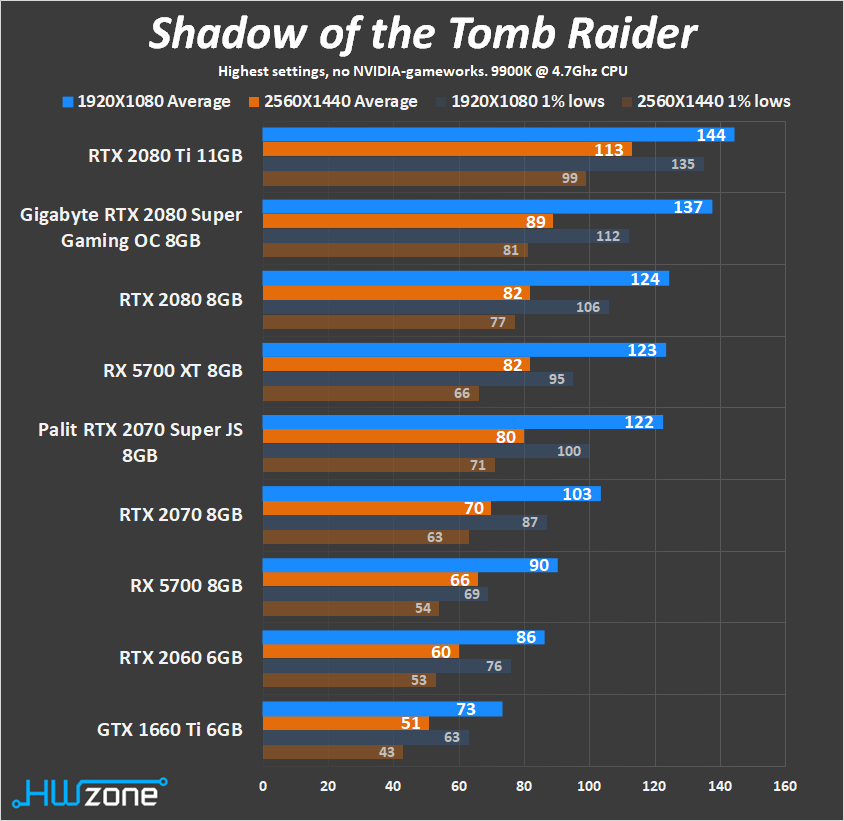 The new Tomb Raider for AMD cards has a strong presence, and the RTX 2070 Super JS shows similar performance to the fully standard RX 5700 XT. Still, compared to cards NVIDIA Others see her as not a bad sample at all RTX 2070 standard. 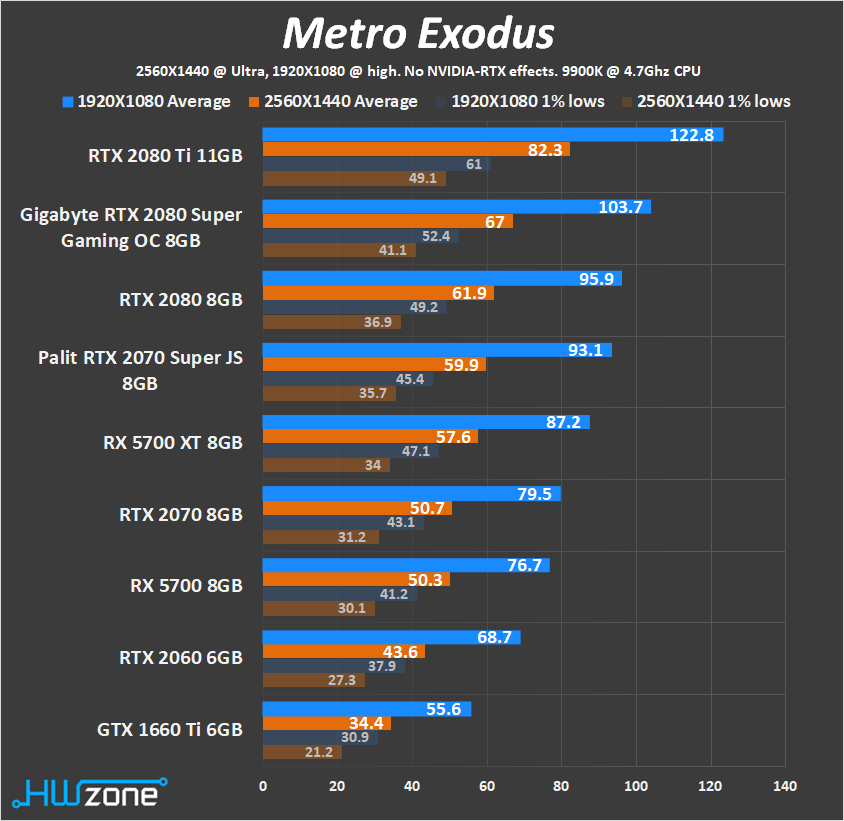 In the heaviest game in our group, the Palit video card works well and is very close toRTX Standard 2080. Admittedly, the performance difference between him and RX 5700 XT is not significant at all. 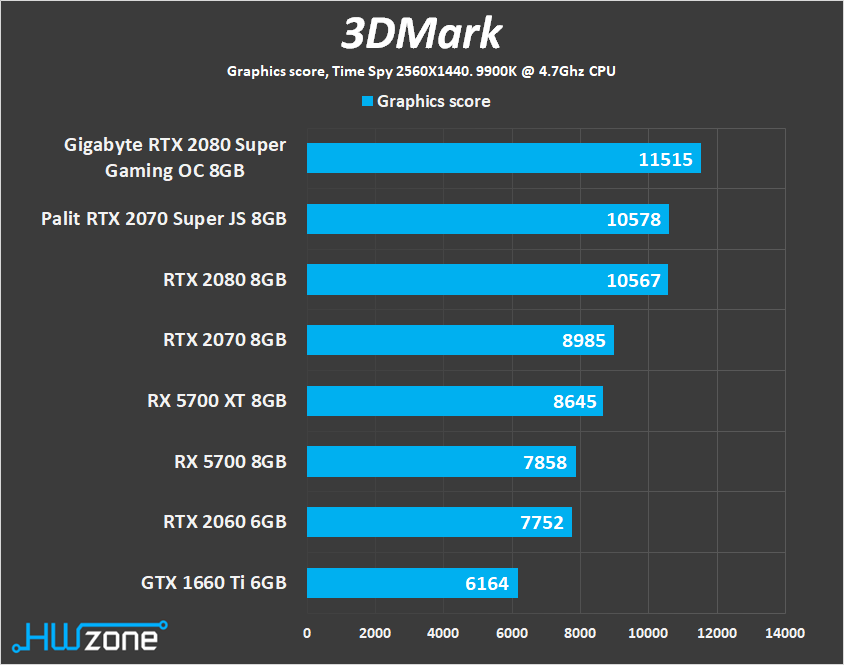 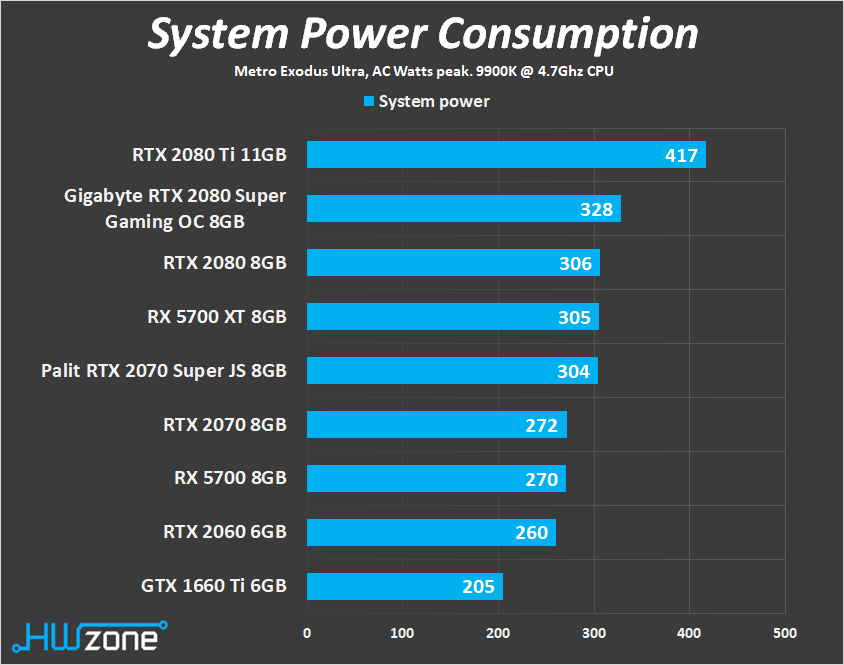 Cool the graphics card Allow the graphic core to be paused at70 Degrees Celsius with ambient temperature of 26 ° C. The fan speed at 1450RPM was considered to be quite low and the cooling was low. Up to 1750RPM power for this cooling, I would calculate it as completely silent, while up to 2100RPM I would calculate it as "quiet". This does not surprise me, Palit has done a great job of continuing to use the same Cooling advanced.

The graphical core operation frequency stayed between 1950Mhz and 2025Mhz on average throughout the effort test that lasted about an hour. Cooling Advanced drives graphical cores to operate at high frequencies.

Something very interesting is happening in the world of video cards currently being sold in the $ 300-500 dollar range. Several of these 200 ranges are compressed graphic cards New and a little less fromRTX Standard 2060 at bottom toRTX 2070 Super at the top.

The difference in performance between these two points is not something I would call "abysmal." It is significant, no doubt, but does not dramatically change the user experience, usually. The difficulty with this is that the RX 5700 XT costs $ 400 and will soon be available in versions with Cooling Advanced, the difference is significantly smaller.

I can see arguments for and against the purchase of theRTX 2080 Super vs. RX 5700 XT cheaper. Some rely more on mature driver features RTX Uniqueness (which will also be available in games like CyberPunk 2077), and in the advanced coolers that are already available on the market today. Is it worth 100 dollars, or about NIS 500? Let you judge.

JS version of Palit She is no less than excellent, and continues a tradition of designs with the motto "If it works great, don't change it." Rich printed board, double bios and thick and efficient cooling on the menu when entering the restaurant Palit. There are no corners and discounts here. About this premium version Palit You will take about $ 30 above the initial $ 500 price, as many versions of the RX 5700 XT will also take a few extra bucks.

Super Model of RTX 2070 completely eliminates the feasibility of any purchase RTX 2080 for my taste (not much of it) due to its close performance and significantly lower price.