Recently, with the launch of new graphics cores from NVIDIA from the RTX 30 series, we have already seen some laptop models from GIGABYTE. We saw a spectacular 15.6-inch computer for content creators, and also Another 15.6-inch computer that focuses mainly on gaming.

Now comes the turn of the 17.3-inch format for computers. This format is primarily intended for those who are looking for a computer that will replace or be closer to the experience they are familiar with from standard desktops. A 17.3-inch workspace may not sound significantly larger than a 15.6-inch, but in practice this is a particularly significant difference. 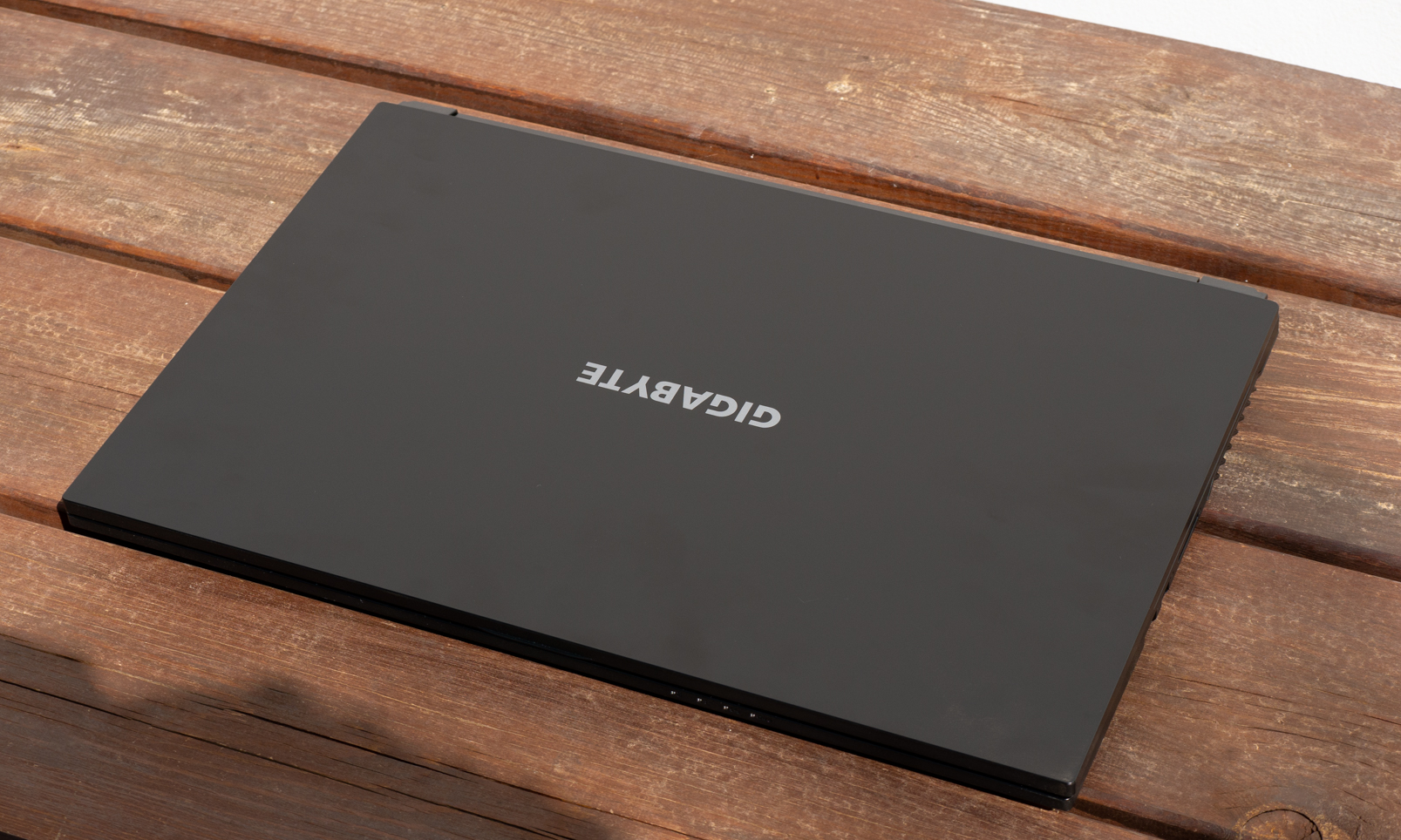 Among the series of laptops GIGABYTE, There is also the G series which is not placed under a category AORUS For gaming but these computers are still designed primarily for content people and gamers who need advanced graphics performance from their computer.

Here is the new GIGABYTE G7 in a configuration that includes a Core i7 10870H processor (the same processor we've seen on AORUS computers so far) and an NVIDIA GeForce RTX 3060 Max-P graphics card. Here you will find the full technical specifications. 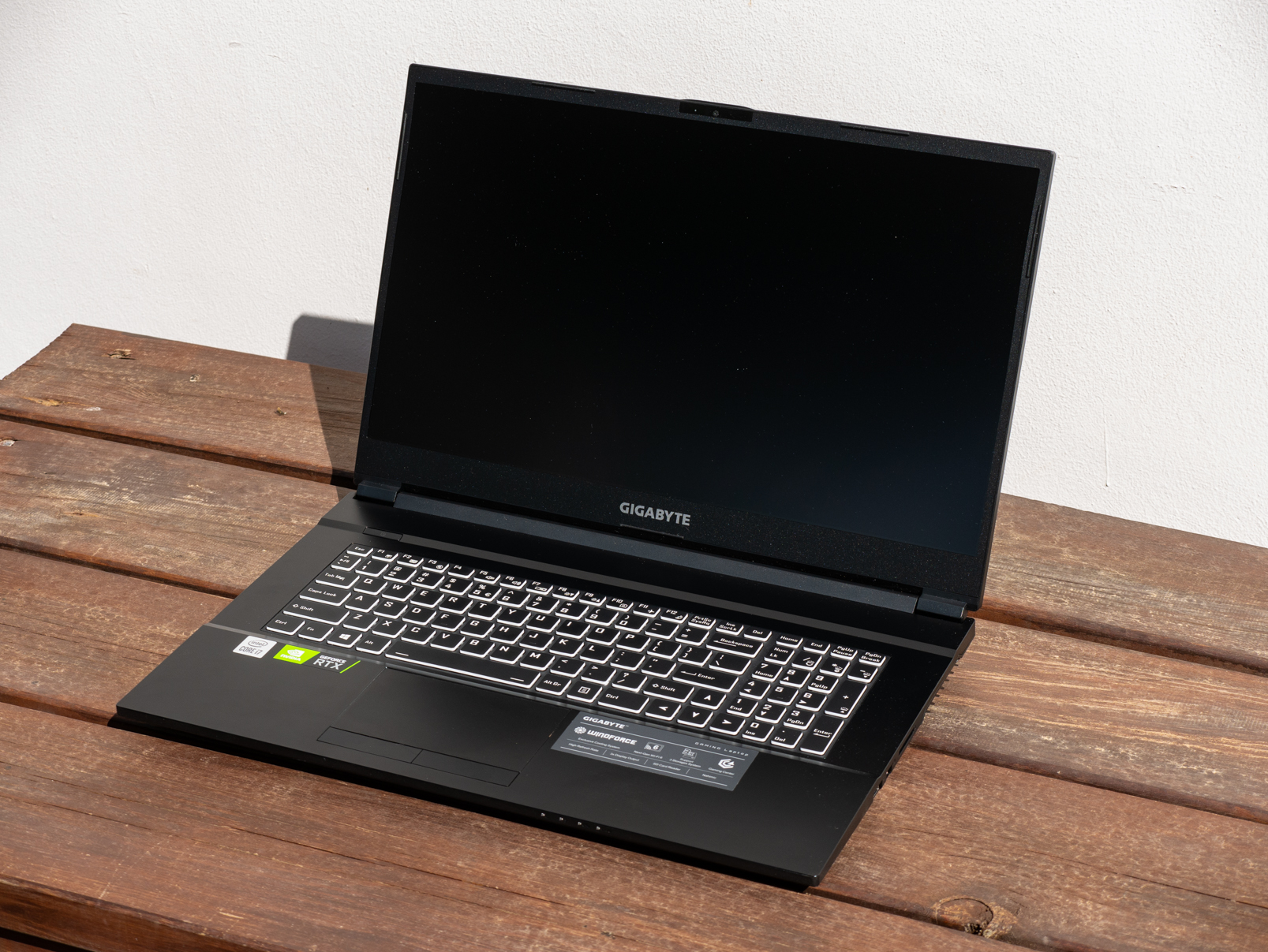 The design of GIGABYTE With the G7 series it is minimalist, and for that it deserves credit points in our opinion. Aside from stickers that have become an integral part of the branding required for advanced computers (and those who really care can remove them with a little patience), there is a traditional design where the keyboard occupies about 70 percent of the area above the touchpad. The screen itself has a fairly thin frame and also includes a camera Network 1280 × 720 pixel photo resolution. 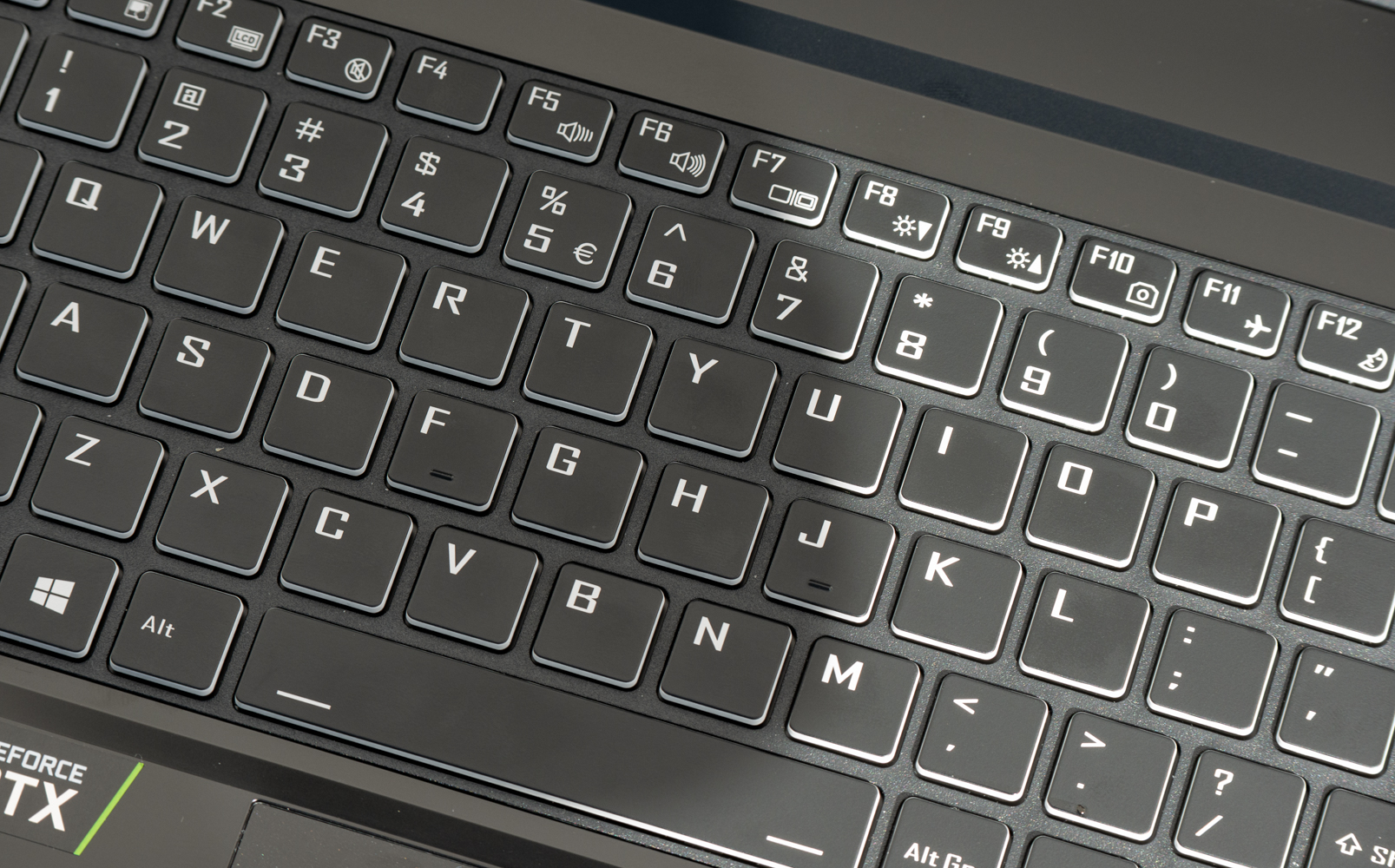 Specifically the computer we have does not come with an engraving in Hebrew but those sold locally will come with an engraving. The experience of using the keyboard surprised me for good. The space between the keys and the keystroke distance until a signal is sent is very healthy. It usually takes a few hours of adjustment in the transition between different keyboards, but here very few errors and difficulties have been observed already in the first typing. Honestly, the G7 typing experience is better than the one I had on my computer AORUS So far. This, while the actual keyboard size is not different at all. This is a keyboard that can also fit a 15.6-inch computer. 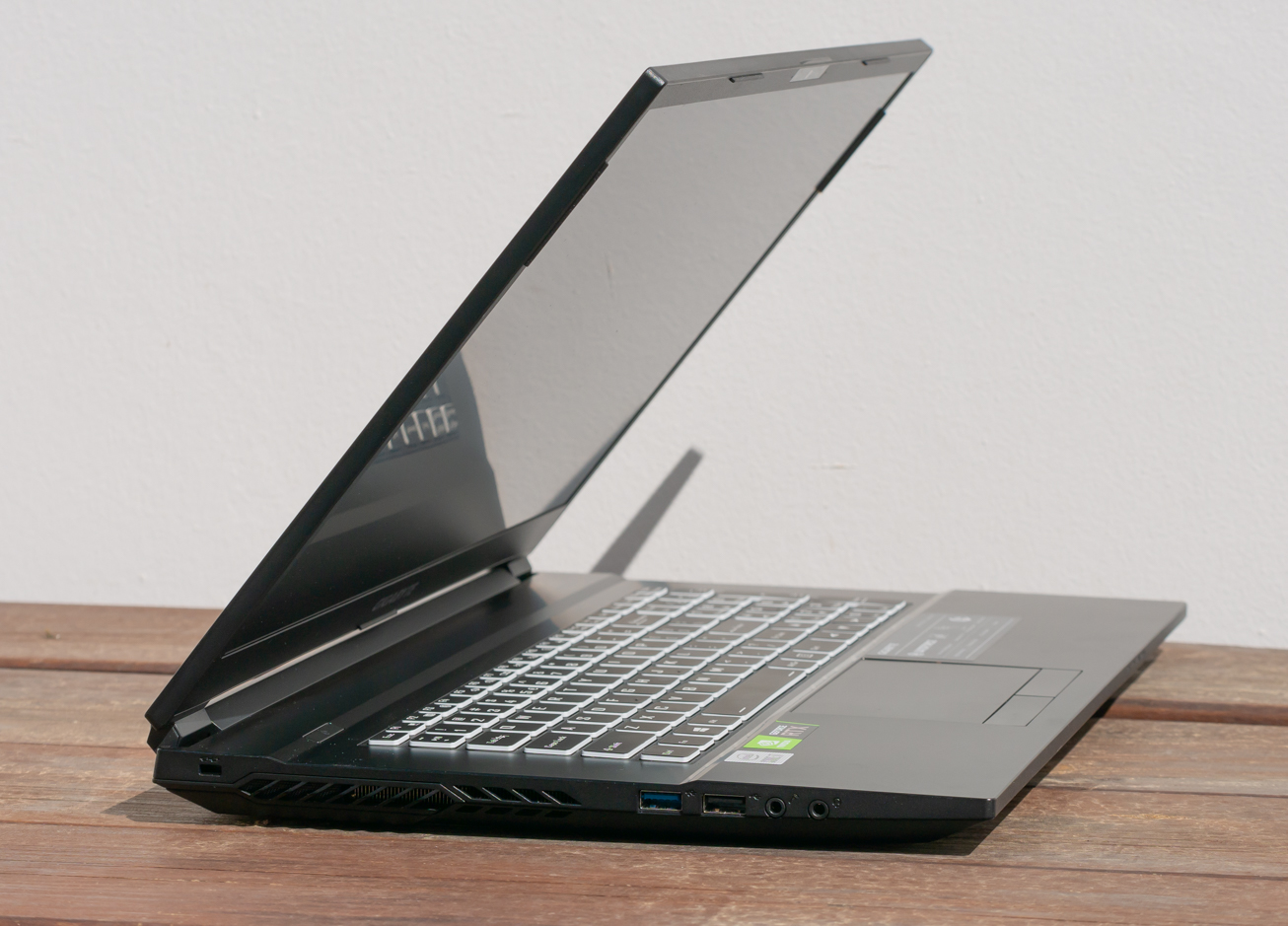 The G7 computer with the configuration we received for review weighs 2450 grams. It is not a very thin computer and is therefore mainly considered a slightly more popular gaming series than AORUS. On one side there are two connections USB (One at 5Gbps), connection to microphone and headphones. 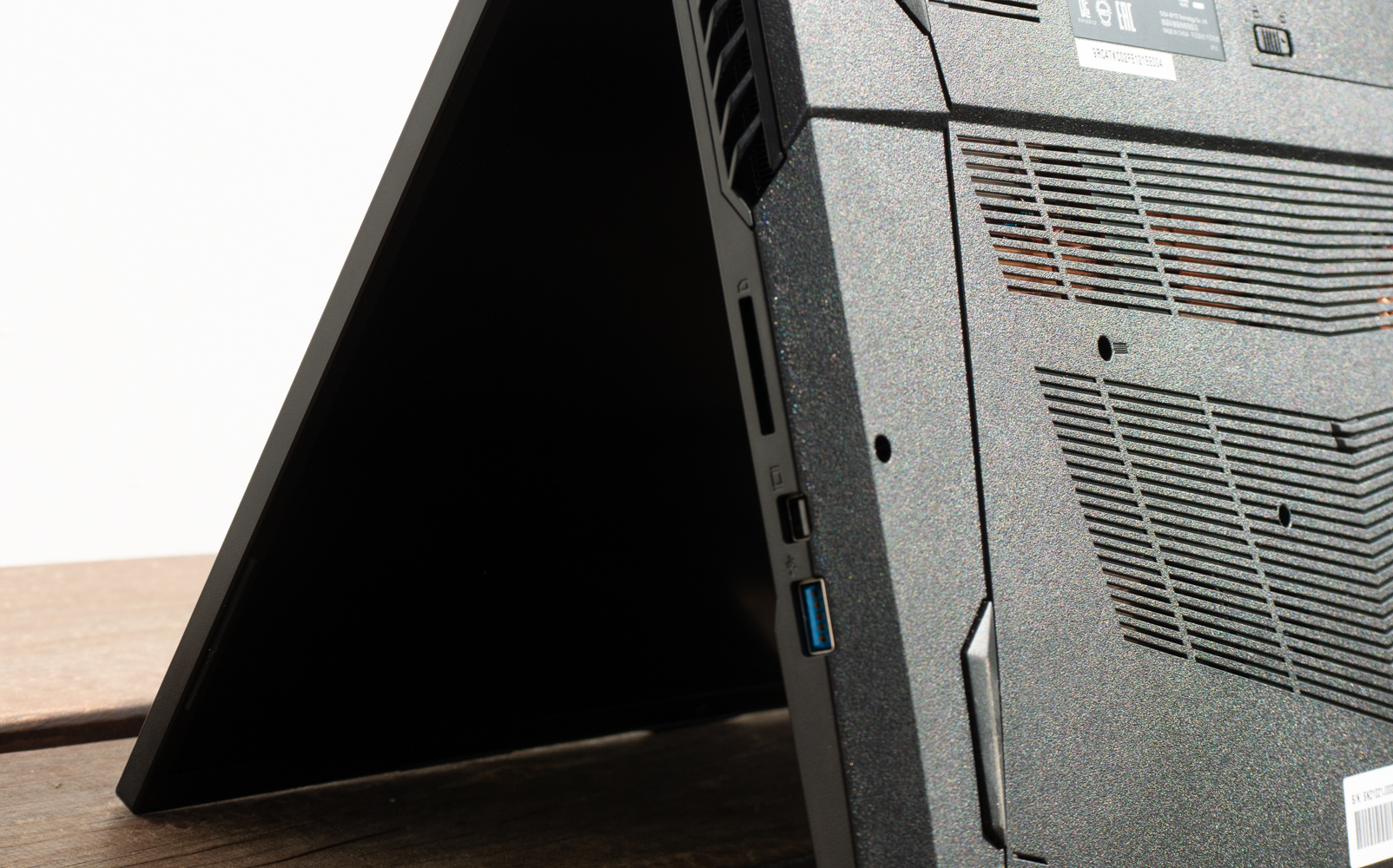 The other side of the computer includes an SD card reader (UHS II speed standard), an additional fast USB connector, and a Mini display port DisplayPort To external screen. 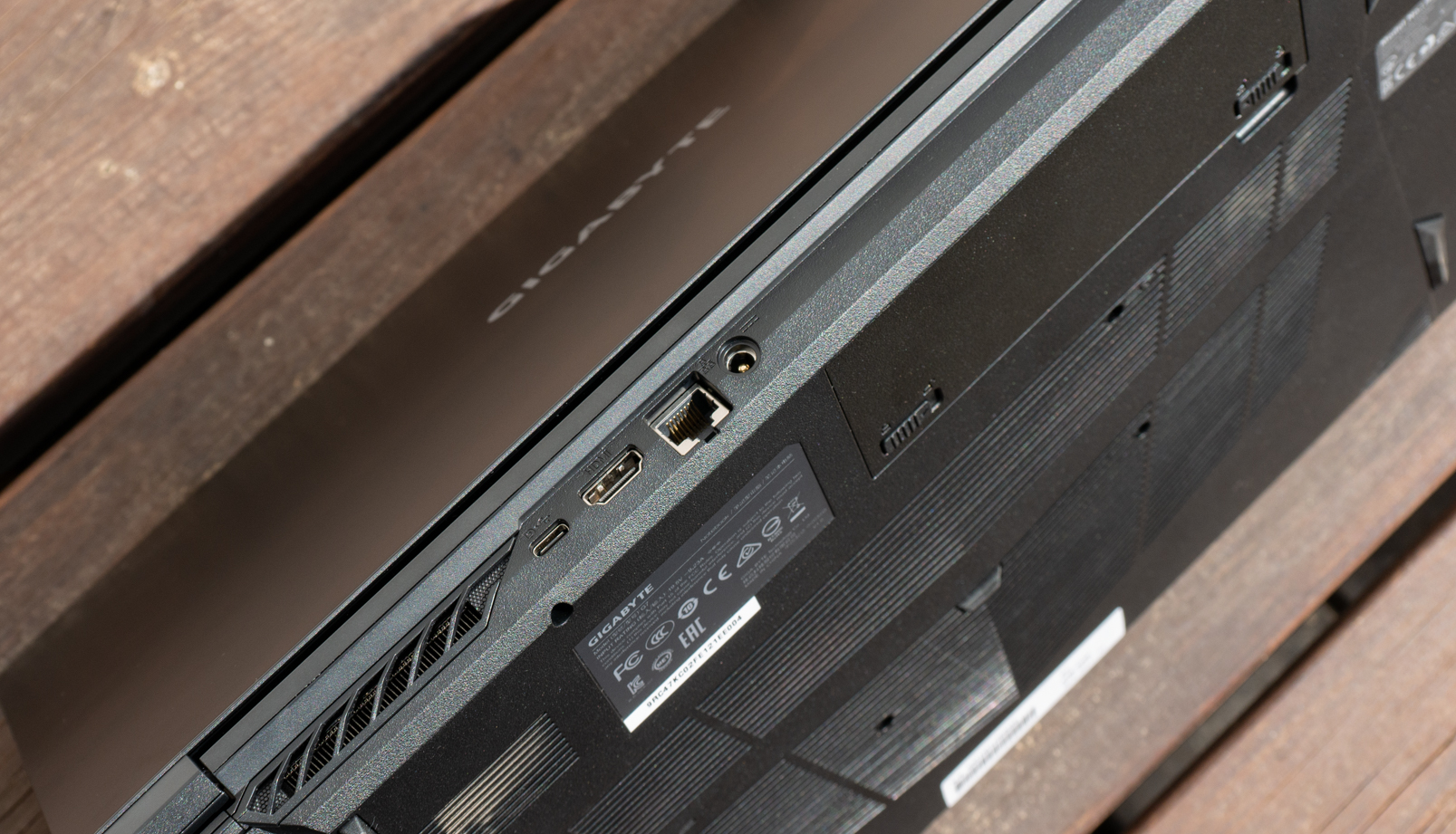 There are additional interfaces on the back of the computer. Here is a DC power input from the external power supply, a 1Gbps network input, a 2.0 HDMI interface and USB Type-C ports that can also take out a DisplayPort standard for display. We know there have been a lot of screens lately Mobile External that support the same Type-C standard with display. 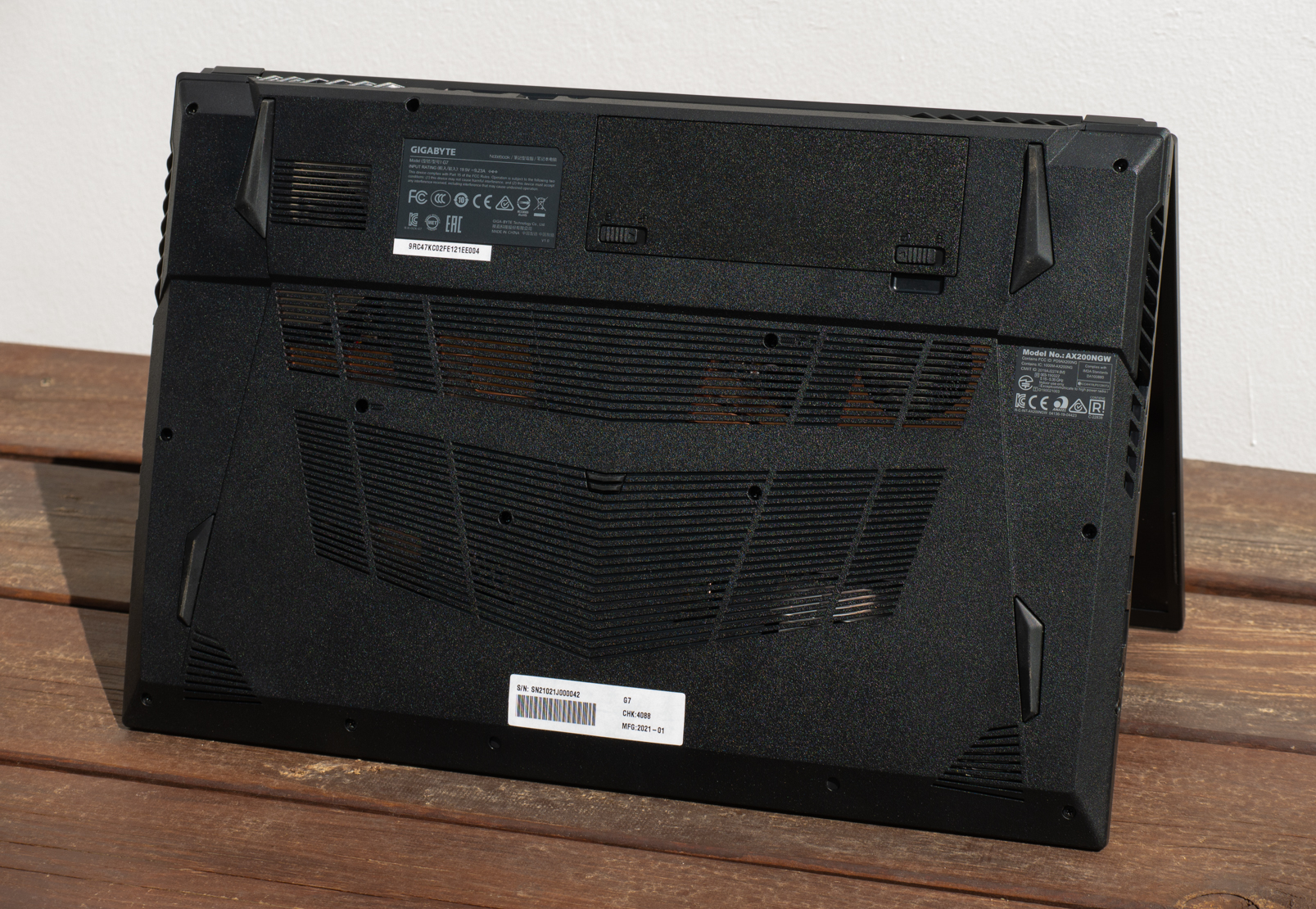 In addition to ventilation on both sides of the computer, there is a very respectable area for air to enter the cooling system that is responsible for both the graphics core and the processor. For this computer battery Removable at 49 watt-hours. These are not large volumes like the ones we see on computers AORUS The smaller ones, but this is mainly an emphasis on the fact that the G7 is a computer that is expected to be powered by a power outlet most of the time.

This computer's storage upgrade capabilities are very healthy. If he wishes, a user can add another drive to the existing M.2 drive, and another 2.5-inch drive in the SATA standard. A total of three means storage Internal. Although there is no need for this in 2021, we will mention that this computer and other new computers existing for gaming have been completely resolved from disc burning, even Blu-ray. Those who are interested will always be able to purchase an external drive. 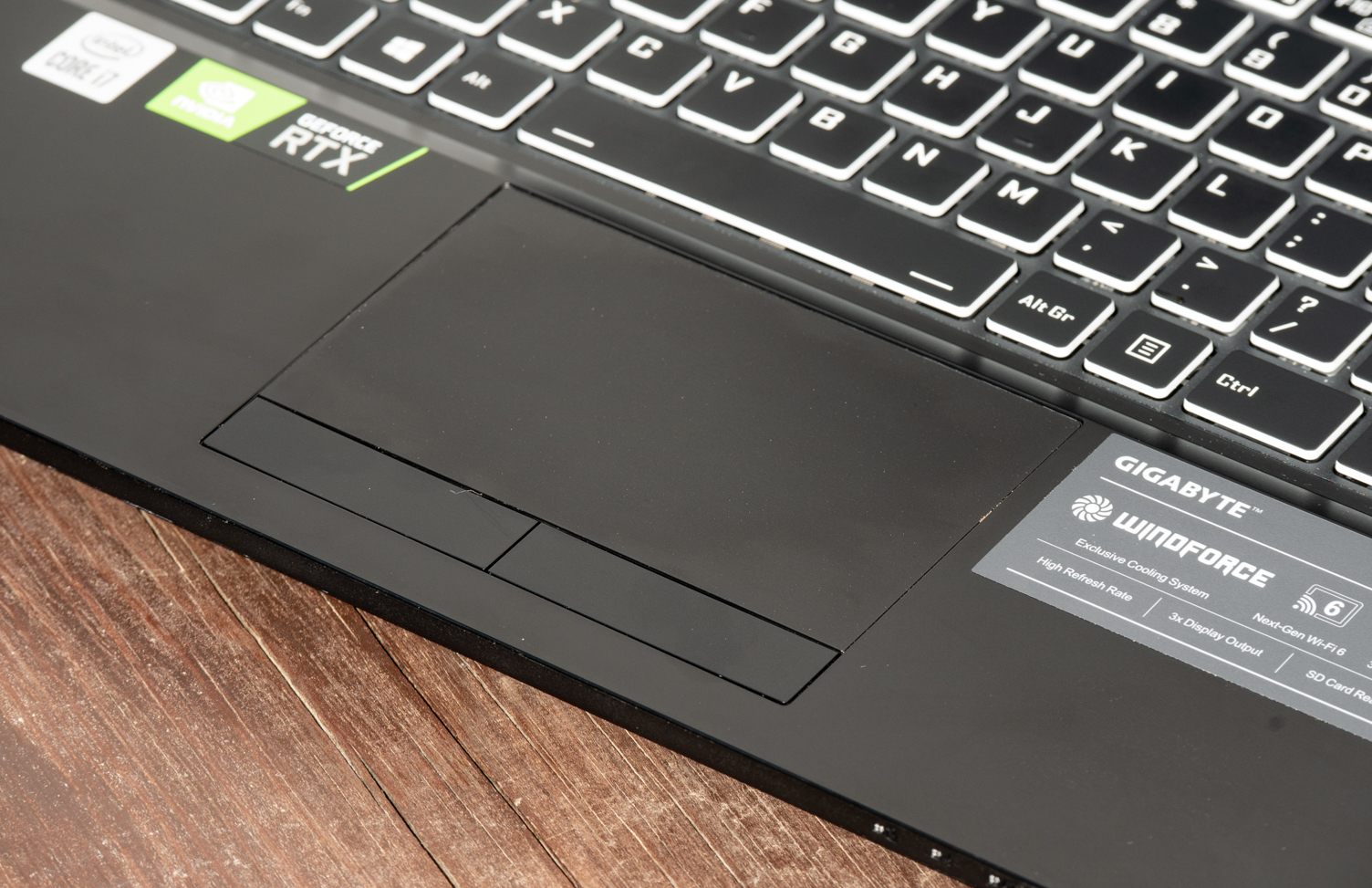 The touchpad of this computer is traditional, and includes left and right buttons for the mouse. Personally, I have a preference for physical buttons for these instead of one large touchpad where the entire surface is pressed in certain areas. Sometimes clicking on those surfaces can drag the past along the way. Just like on a keyboard, simplicity seems to win. It is also not a surface with a smooth coating or glass, just the same familiar plastic surface that the world of laptops has been using for a long time. 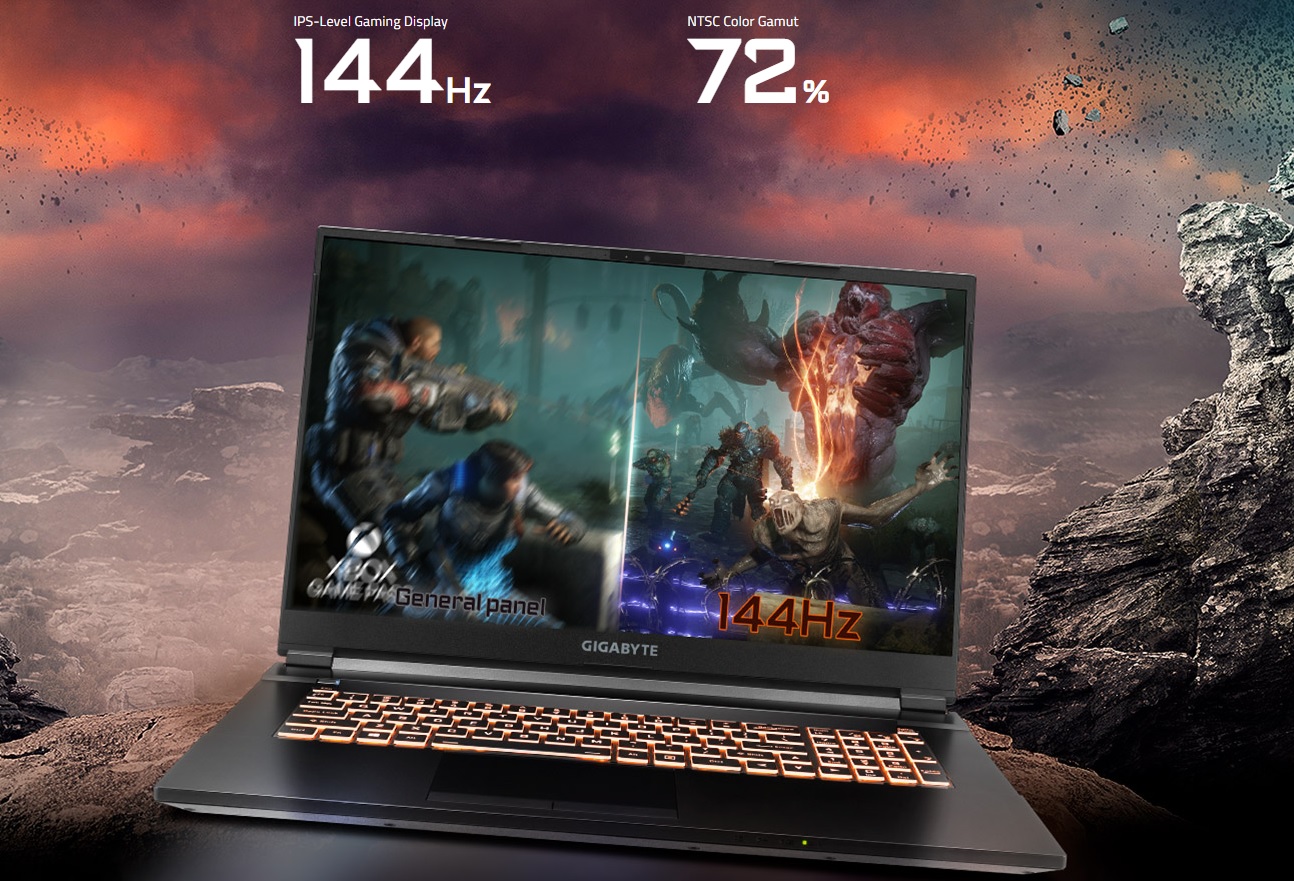 Besides having a video card GeForce RTX 3060 Max-P, one of the things that makes this computer suitable for gaming is a screen IPS 1920X1080 resolution at 144Hz refresh rate. I think this is the right choice, and that this resolution for this screen and this video card looks like a balanced choice. If it was 2560X1440, I think the graphics core would have performed less than optimally in a variety of games.

We are working on performance tests for this laptop. It is important for us to emphasize that we test the performance of the computers only after letting the CPU and video card heat up well for about a quarter of an hour to stabilize their operating frequencies. We know that the first few minutes of effort will always be the fastest on computers Mobile Thanks to a lower operating temperature. The exam resolution remains 1920X1080 for laptops. 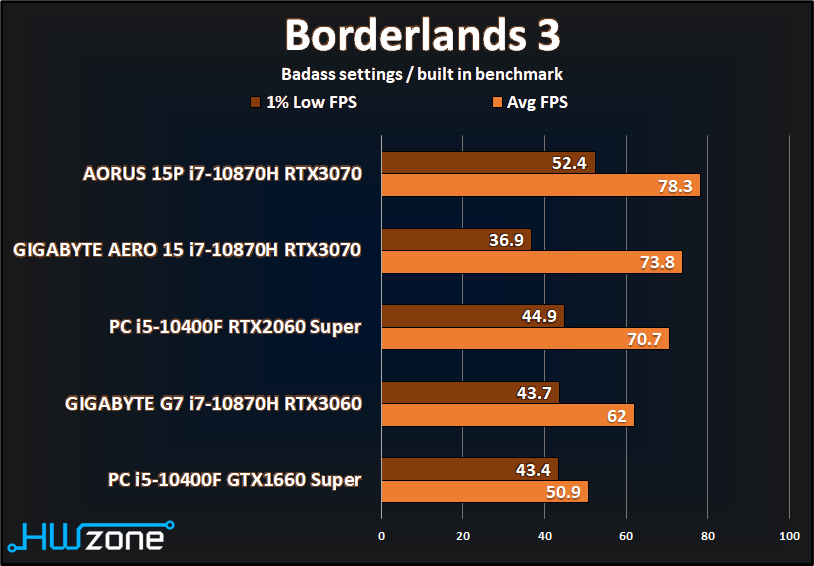 In the Borderlands 3 game the G7 performance is quite respectable, delivering an average of just over 60 FPS. The graphic power of theRTX 3060 inside this computer is located between the GTX 1660 SUPER and RTX 2060 SUPER Stationary. More or less level RTX Standard 2060. 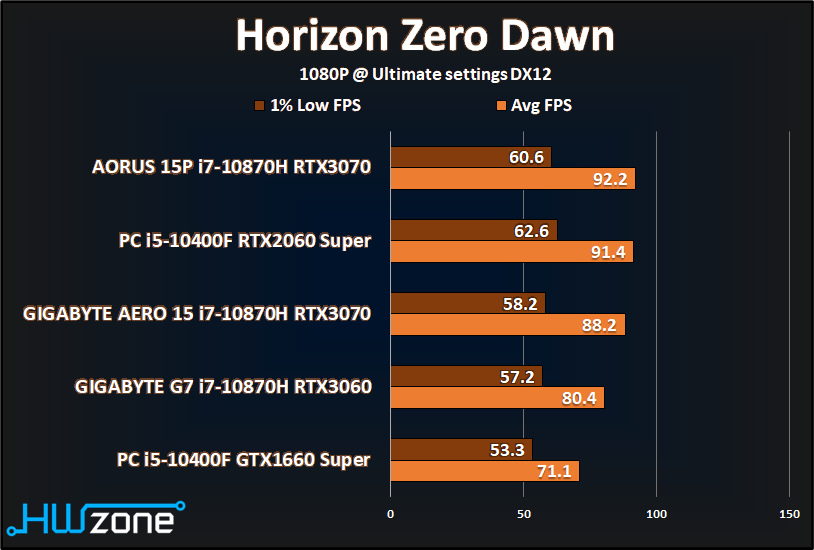 In the Horizon Zero Dawn, which also relies heavily on the processor, you can notice gaming performance quite close to those we saw in computers with the RTX 3070 laptop. The difference between a desktop computer system with a GTX 1660 and one with an RTX 2060 SUPER remains similar. For heat and capacity shell Cooling Very great importance in the results of this test. 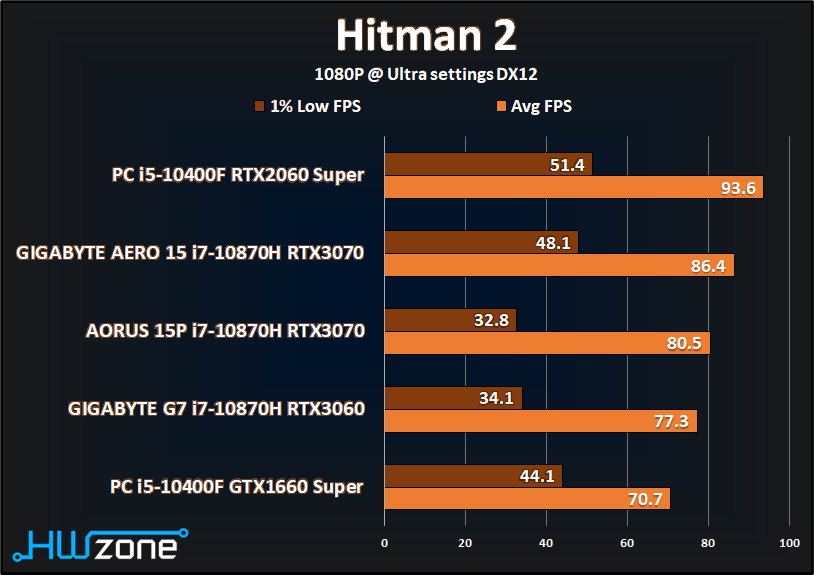 In Hitman 2 the G7 performance is similar to our GTX 1660 based desktop system, with lower minimum performance due to lower CPU operating frequencies. Still, even under maximum settings we got over 70 FPS. A little play with the settings and you can pass the 100 FPS threshold to enjoy more of the high refresh rate effect of the screen. 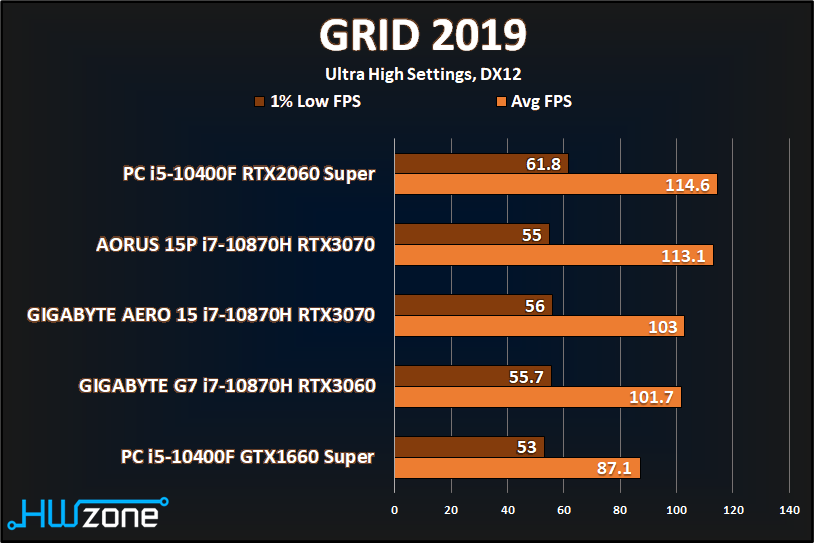 Summary - The experience of using and the viability of the computer

In the number of days I spent with the G7's PC GIGABYTE I get the impression that this is a very good machine. The build quality of this laptop is solid, and it does not creak under pressure. Nothing feels like it's going to break or fold and that indicates care in its design and assembly.

The noise level that this computer produces in the effort is relatively high, which is a slightly less positive score that I had to give the G7 compared to the AORUS models that were tested some time ago. Despite the larger volume to work with, this 17.3-inch computer uses the system Cooling Which requires a higher RPM from the fans during exertion.

In gaming performance the G7 with RTX 3060 is similar to a desktop system with an RTX 2060 video card so using the 1920X1080 display makes a lot of sense. Unlike advanced gaming computers with RTX 3070 Mobile, The G7 comes with a fairly compact external power supply of 180W. The power consumption of the graphics core is 80W during prolonged effort, that of the processor is only 45W.

As with other recently reviewed laptops, it is important to note that the 10th generation of Intel processors in laptops is actually considered an earlier generation, with the corresponding Ryzen 5000 processors of AMD Faster in almost every possible situation, and when we are expected this summer to see the 11th generation of Intel Tiger Lake based with 6 and 8 cores comes to computers Mobile For gaming.

Still, the 7-core, 10870-core Core i8 16H is a "powerful enough" processor for any possible average operation. It is possible to edit images with such a processor, it is possible to edit films (as long as it is not about exceptional resolution and color depth) easily and without a problem. We are in a time when you are getting processors AMD Challenging enough, andGIGABYTE Wanted a healthier inventory to create.

Operating System Windows 10 that comes with the computer is very clean, and apart from the control software of GIGABYTE There was no “junk” that made him work slower or run unwanted background actions. It appears that-GIGABYTE Prepared a very minimalist version of the operating system for this computer (and the protocol for its other computers as well).

Like any advanced piece of hardware today, the G7 will also be quite expensive. This laptop stock is currently in short supply and we are hoping it will return to the country. Its price is expected to be in the region of NIS 7,500 for a configuration with 32GB of memory DDR4, Drive SSD Of 512GB M.2 and video card RTX 3060 Max-P (faster version compared to Max-Q).

If it's available and it's the actual price, it's a pretty good deal considering the supply currently available, and contains mostly weaker versions of this video card, and less memory. Let's say carefully that as long as the price is lower than NIS 8,000 מחשב נייד It will be a healthy candidate to choose for the potential target audience. Given this period a reasonable price, and when we return a little more to the price routine we knew, we hope to shrink to the 6,500 area