We took a tour of the laptop that wanted to replace huge stationary gaming positions - theAlienware Area-51M by the renowned American manufacturer. Is he able to keep up? The answers inside

There are times when one or the other computer maker decides to take a rather bold step and launch a product that redefines what consternation and exaggeration in design and approach - this laptop is definitely one of those products.

The Alienware Area-51M is a highly advanced laptop from home Dell Who wants as much as possible to be a replacement for desktops but not just ones, but gaming and productivity monsters that are considered advanced even in the desktop market space. 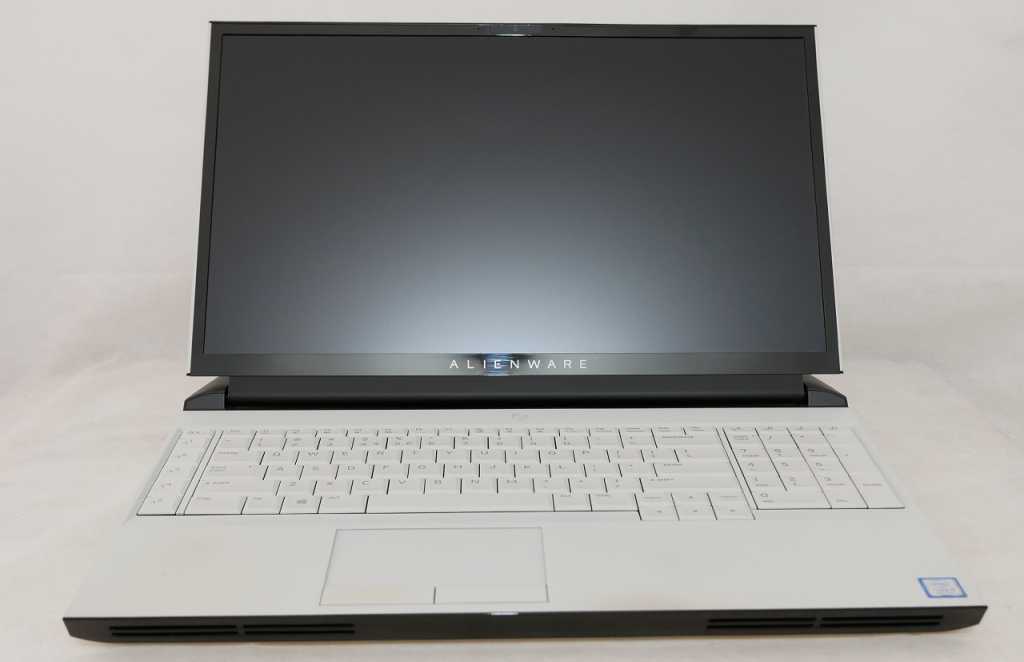 The Area-51M is the flagship series of high-end laptops in the Alienware brand, and comes with 17.3-inch screens, which puts them in the "Desktop replacement" category, laptops designed to replace desktops, among others. These computers are coming In a variety of technical characteristics When our model has a desktop processor core i9 9900K and video card GeForce RTX 2080. 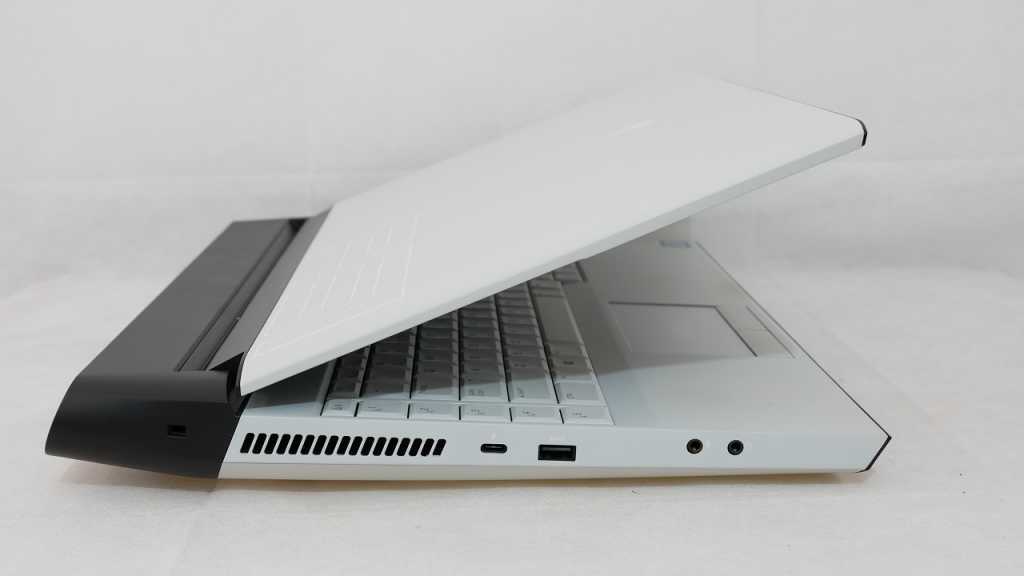 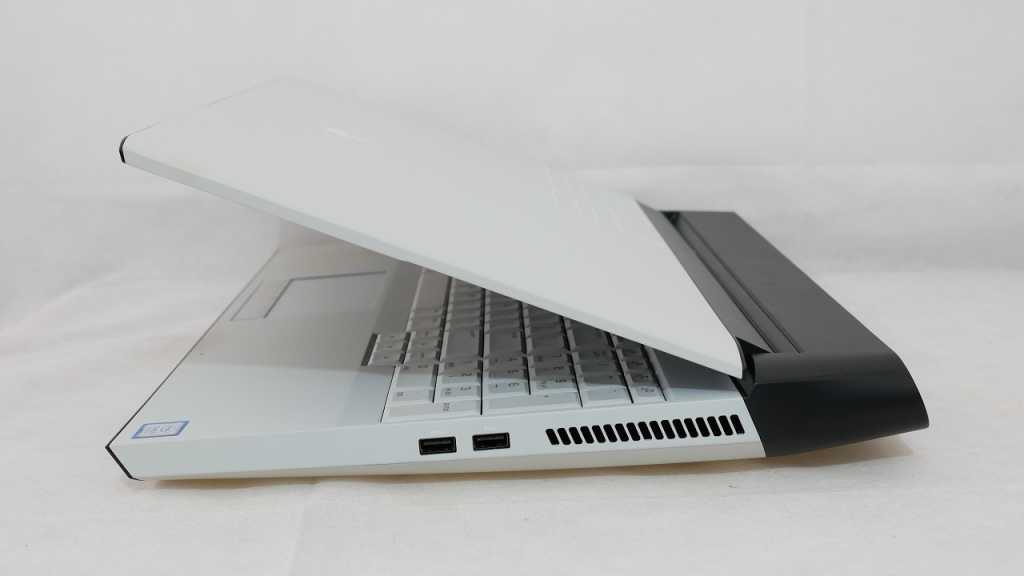 The specific design we are given is one in white, and there is one in black as well. Given that this is a computer that is primarily geared toward gaming, there are no bold lines and design here that will mostly make you want to hide your computer from others. This minimal design is always a plus. There are many USB ports on both sides, headset and microphone and even connection Thunderbolt 3 in the Type-C interface. 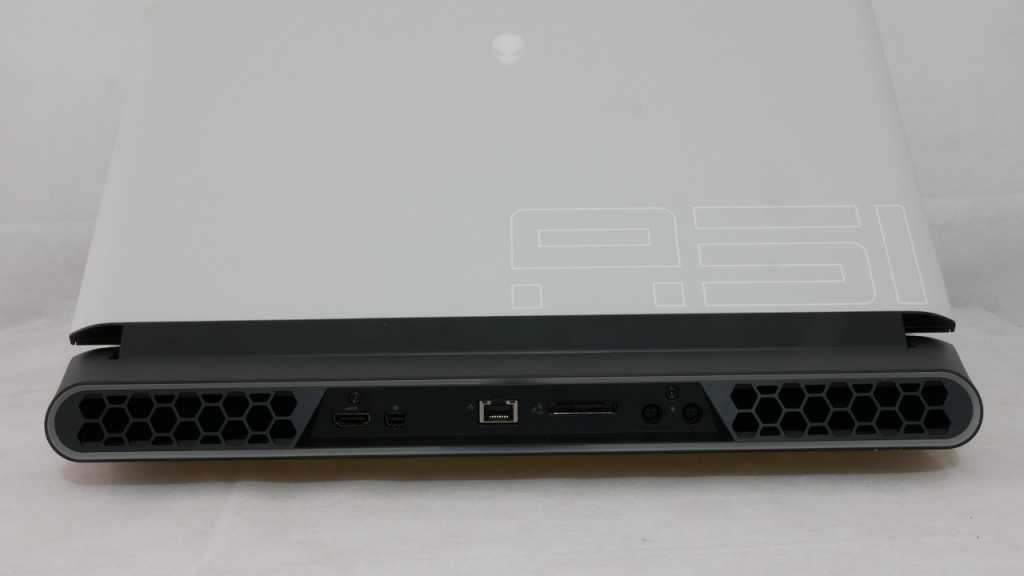 The back of the computer has a docking station connection, 2.5G wired network input, Mini DisplayPort port and HDMI port. Thus, connecting the computer to two external screens is a very simple procedure. Including 2.5G network controller is also a great addition and upgrade over traditional 1G controllers found on computers Mobile. On the back of the computer you can also find the air outlet openings for the computer's cooling and video card.

The bottom of the computer includes air inlets and six screws to open the lid and access the internal components. 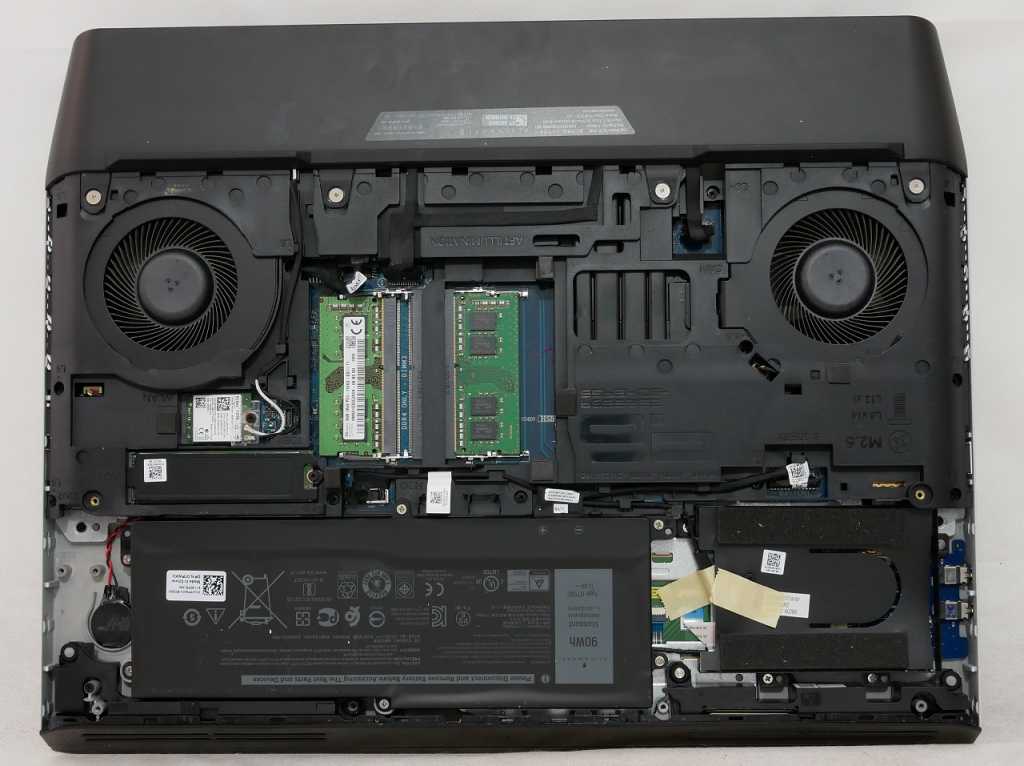 There is direct access to all the parts that can be upgraded on this laptop. It features a large, understandable 90Wh battery, the option of programming a standard SATA drive, and comes with an already installed M.2 NVMe drive. The heat sink for the processor and graphics card has many pipes and a large fan that removes heat. Remember, thecore The i9 9900K is a standard bracket processor so it can also be replaced. Specifically, it is the most powerful processor for the existing bracket, so there is really no point and ability to upgrade it in this model. 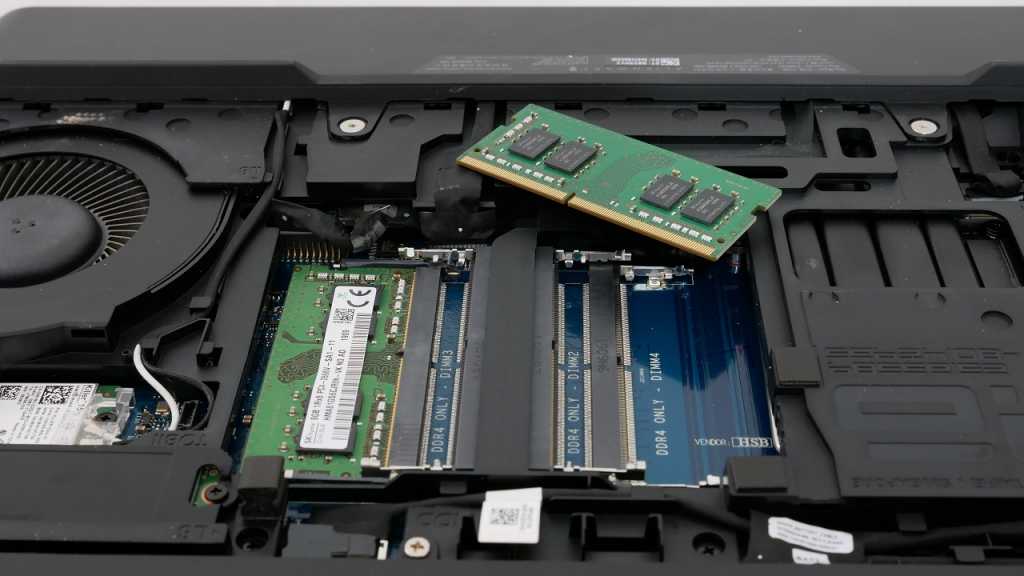 There are four SODIMM interfaces DDR4 Allowing upgrading of memory up to 128 GB, very respectable. Specifically our unit we received with 16GB. 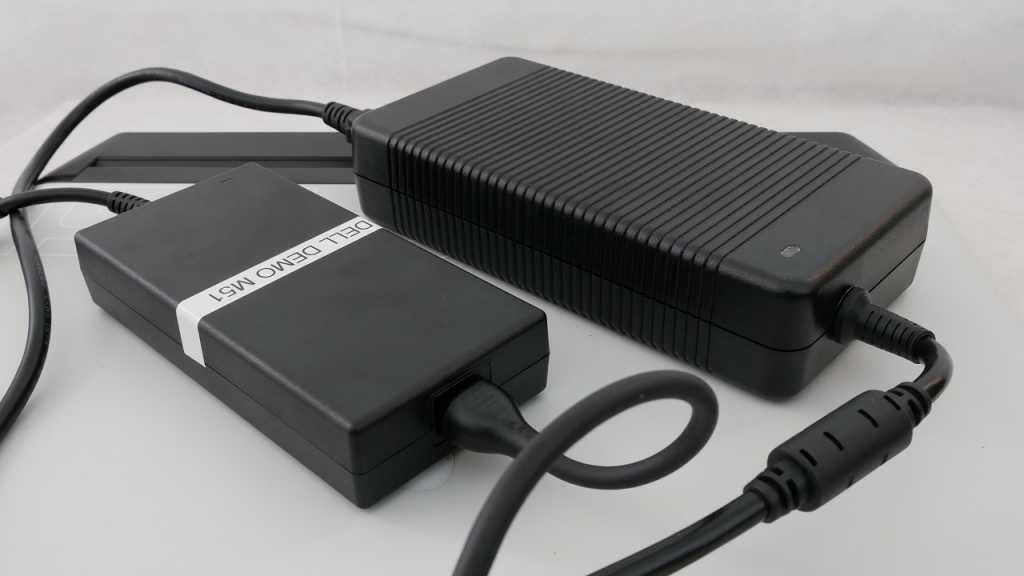 These two power supplies are what the Area-51M requires in the configuration we received. One power supply rated for 180W and the other for 330W. Serious desktop-level components still require that level of power, at least for this model and age (early 2019 model).

How do I enable a gaming product without an RGB keyboard? The Area-51M contains this, with full-size keys. The typing experience is very pleasant, and I will say that it is one of the best things I have ever experienced on a laptop. When asked for a laptop of this size that wants to be a replacement for a desktop computer, the typing is very fast and convenient, the spacing between excellent keys. 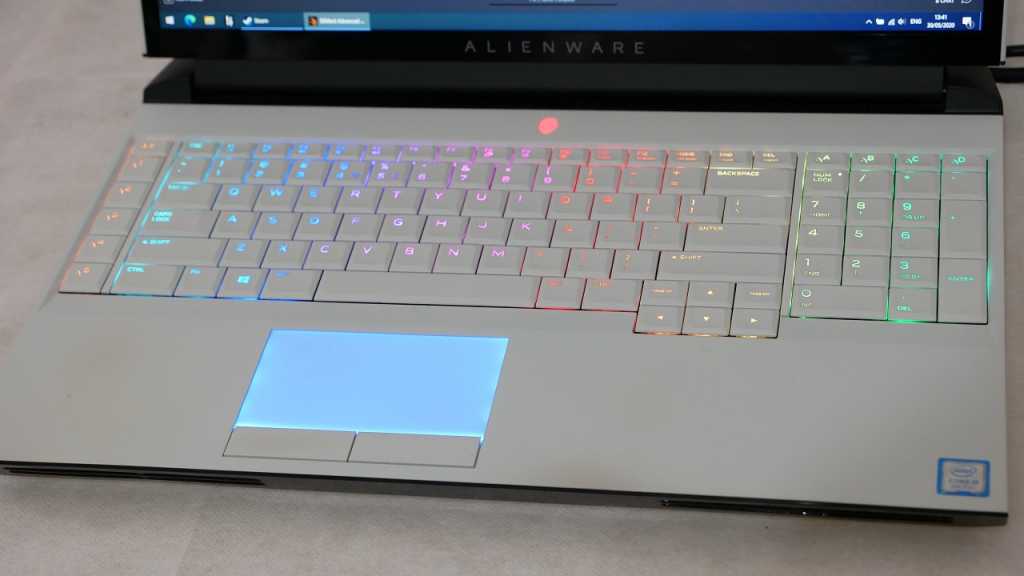 The existence of the Numpad keys is also a good choice, as there are many who use Tell these keys. The mouse pad track is also illuminated with RGB and its size is respectable. The surface is very smooth and its responsiveness is among the best I've ever seen on computers Mobile. I was expecting such a gaming computer to come across a trackpad that can be found on fairly standard PCs, but the ability to control a pointer is almost as good as that found on a PC Mac Bok Air (picks up the audience against tomatoes).

The speakers on this laptop are by far the strongest difference I have ever encountered on any laptop, ever. Seriously, I got to hear standard desktop speakers that don't reach that level. I don't know what Dell Did here to get it, but his blood with half the power can hardly illustrate the noise level.

The screen is a 17.3-inch IPS screen at 1920 × 1080 resolution. It can come in with configurations G-SYNC And without, up to 144Hz. I believe that in future generations, Dell will upgrade the screen to a higher resolution like 4k Or 2560 × 1440, which is required by a flag product. Due to being a little veteran, the relatively low resolution can be understood.

The engine that pushes the graphics on this laptop is the Geforce RTX 2080, a respectable video card for all opinions. In order to understand how fast it is, we decided to access the Area-51M with a desktop computer that has the same components as those with core i9 9900K andRTX 2080.

In the Shadow of The Tomb Raider game:

It's a very close performance, at least graphically to the real thing. The Area-51M is מחשב נייד But contains the gaming capabilities of a parallel desktop computer.

God-core The i9 9900K is mainly limited in cooling and power consumption, which is all to be expected מחשב נייד Compared to stationary when we measured rendering times in Blender with Classroom test:

This difference is relatively small and very respectable מחשב נייד. These tests prove that Area-51M has no real compromise on performance מחשב נייד, At least when plugged in. What you see is what you get.

The price for the tremendous performance is how no, the noise level. The Area-51M cooling systems have a serious job of removing heat from two very serious chips, and for that space and size restrictions are needed for high-rpm fans. Noise levels and noise levels are as horrible as some might think. No buzz or noise in the pizza "High and annoying. Besides, the expectation is that the audio system is headphones Cover the noise of the fans while playing.

For the past two weeks, I've been dealing with the kind of product I usually see at launches and media events. These are the kind of products that companies mainly want to display as a flagship product and technological achievement that only very few users can afford.

As of this writing, I understand that this is a year-and-a-half laptop, and since a lot has been launched in the laptop world (less on video cards, where the RTX 2080 is still in front of you, more in the processor world). I do not expect website users who read this review to submit and consider a purchase of Area-51M, certainly not when we are likely to see continuing with very up-to-date technical specifications, probably with the XNUMXth generation series of Intel.

The processor on this computer probably won't be able to upgrade anymore, but it's important to note that the RTX 2080, which is connected to the MXM PCIE 3.0 interface, means that if it is launched in the future graphic cards More advanced to this interface, it can also be upgraded in Area-51M.

Weighing 3.87 pounds, and two large power supplies weighing over a pound together, it's hard to call Area-51M a "laptop." It is the type of computer that will usually spend in one area of ​​the home, and when it is probably connected to another screen and even peripherals such as a keyboard and mouse. Desktop replacement is a good description of such a computer. Admittedly, a person working with such a computer and having to go out into the field for demos will enjoy the power of his mobile processing. We know that, for example, the world of architecture imagery has gone up some steps in recent years, and demonstrating projects with clients and acquaintances is an action that many do in real-time with such desktop computers.

It will be very interesting to see where Dell decides to take the Area-51M series soon when Intel's Tenth Generation series and the Ryzen 4000 series AMD Occupy the center of the mobile processor stage. This product symbolizes its commitments in providing serious processing power without compromising the performance recognized by desktops with parallel specifications.