This summer AMD brought us a series of video cards that for the first time pose a real competition against NVIDIA's RTX series In the form of Radeon RX 5700. Many users waited to know what they would get for their money with these video cards.

Admittedly, one slightly problematic obstacle was placed between the user and this video card and is the thermal properties and the choice of cooling available. When these video cards were launched two months ago the only option was Cooling Blower with body Cooling Quite humble. The result is of course extremely high operating temperatures and lots of noise.

AMD promised we would see graphic cards Owners of refrigeration are "very soon", and so after two months the various video cards from various manufacturers come to the shelves. 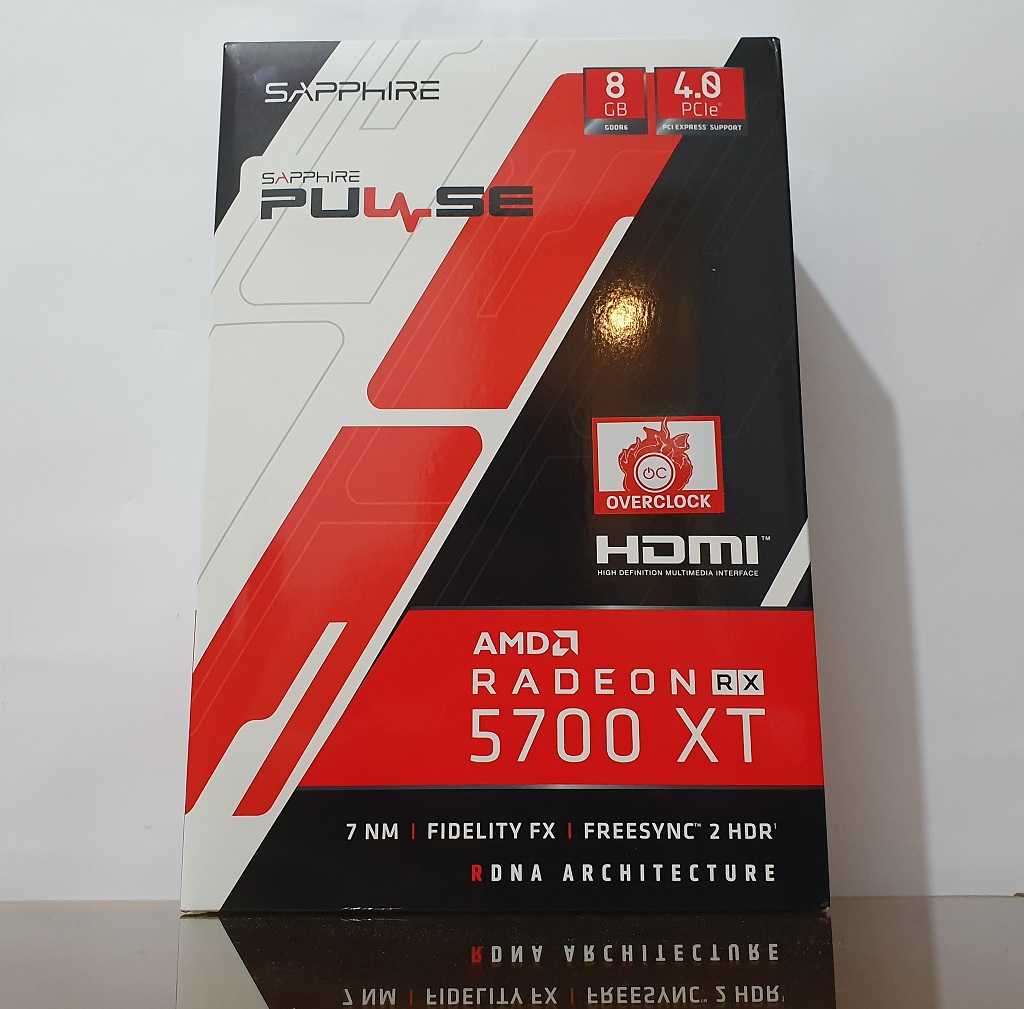 In this review, we will focus on the new star of none other than Sapphire, the most recognizable manufacturer of video cards AMD. The Pulse is a particularly interesting model mainly because of its price. While the basic official price of Radeon The RX 5700 XT is $ 399, the price of this model with Cooling Advanced is only 409 $ while advanced models by other manufacturers usually start at 419-429 $.

This video card is based on a graphical kernel produced in the 7 nanometer procedure at the Taiwanese TSMC plant. The "RDNA" core of AMD That this video card contains 2560 Processors Unified graphs operating at up to 1925Mhz clock frequency, although the card can accelerate slightly beyond that if its operating temperatures allow. Graphic memories are connected to the core GDDR6 8GB in volume through 256BIT traffic path. 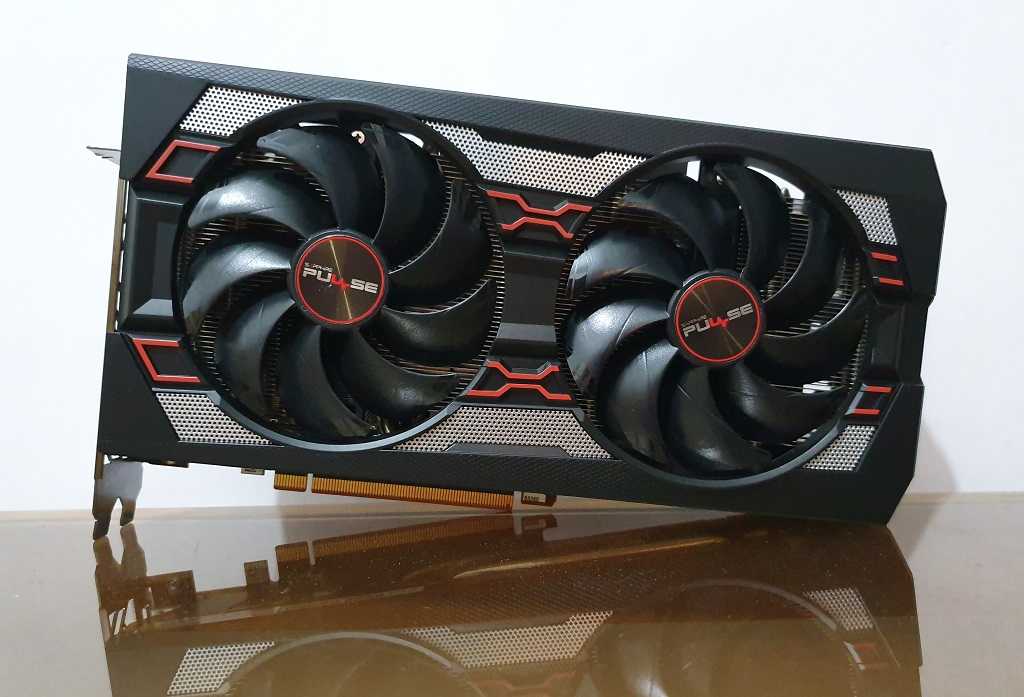 This video card configuration is one with two fans and a body Cooling Below them. 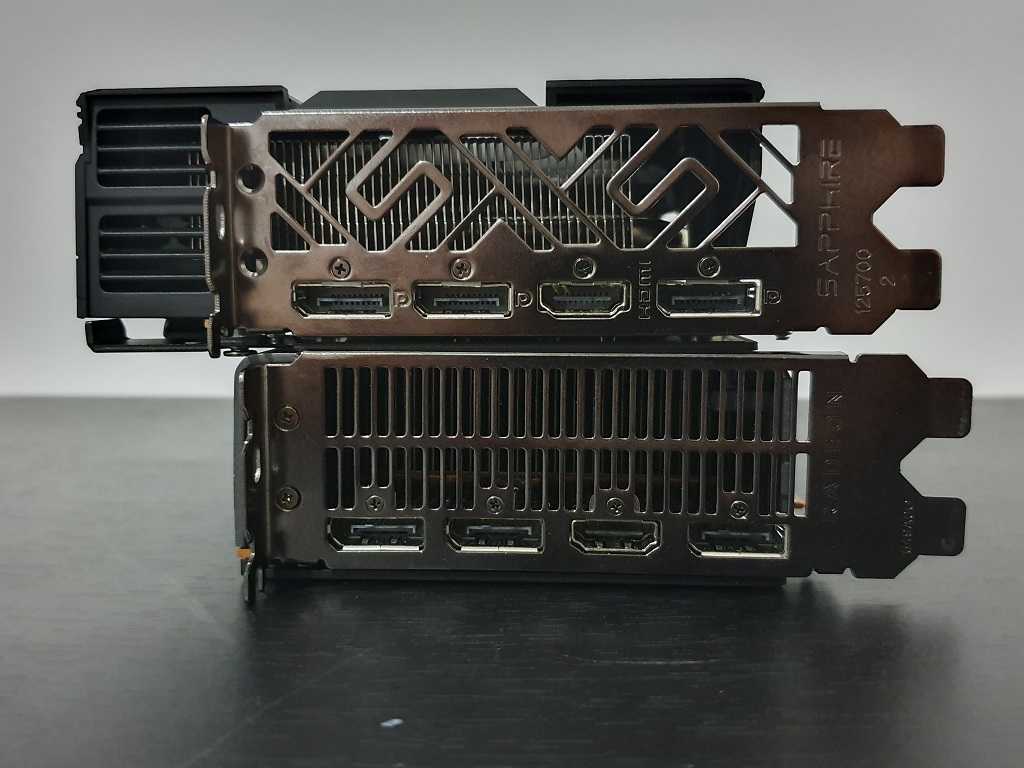 The height of this video card is significantly greater than the default design of AMD And stands at about 13.5 inches. The thickness of the video card is also slightly larger and occupies 2.5 slots compared to 2 only. The display port array has not changed and is about 3 type DisplayPort 1.4 and one type HDMI 2.0. You can connect four screens simultaneously through each. 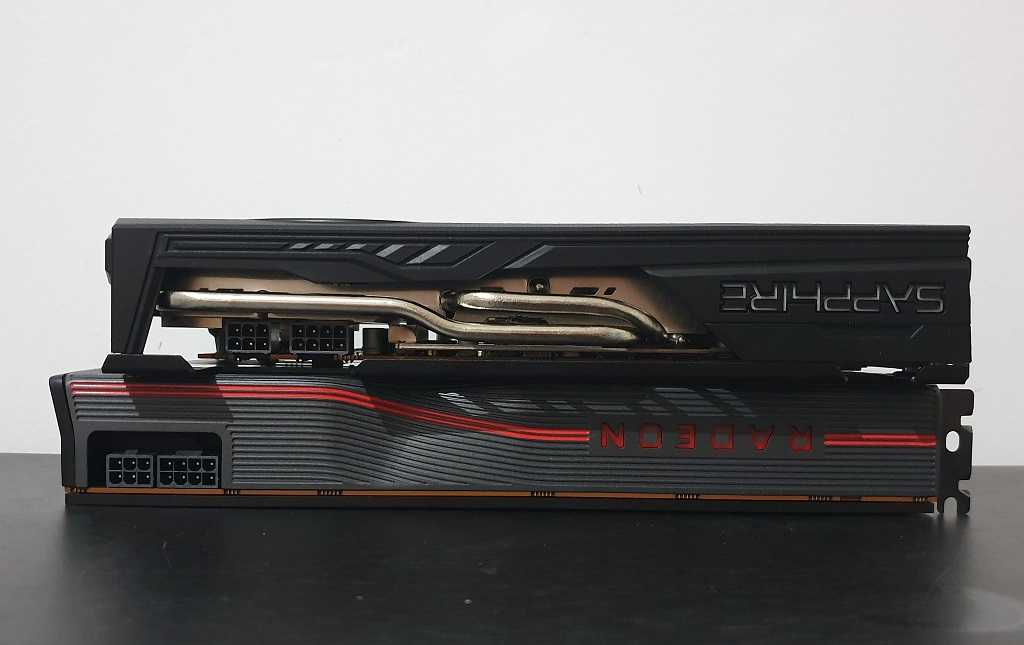 Its length is two inches shorter than that of the default design and stands at only 25.4 inches. As you can see, the power requirement for power supply connections remained the same with one 8PIN and one 6PIN. 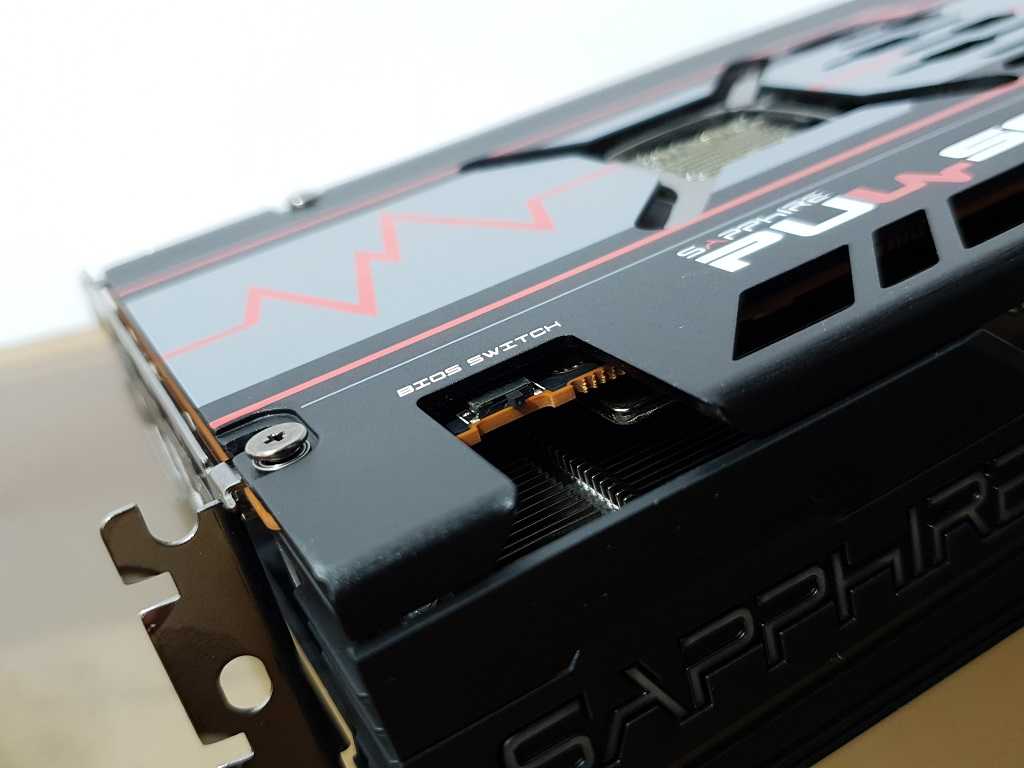 The Pulse of Sapphire Enjoy two bios chips for the graphics core and there is a switch that allows you to choose between two modes, one of which is quieter but warmer while operating, the other more tuned for performance and increases fan speed to achieve better operating temperatures. 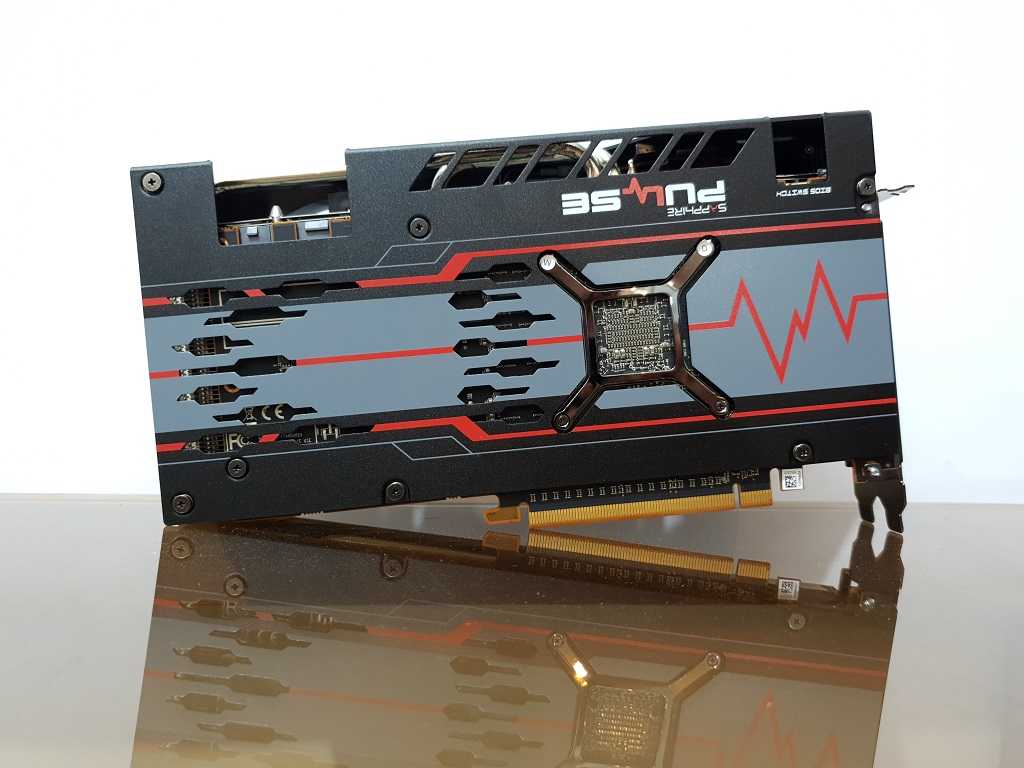 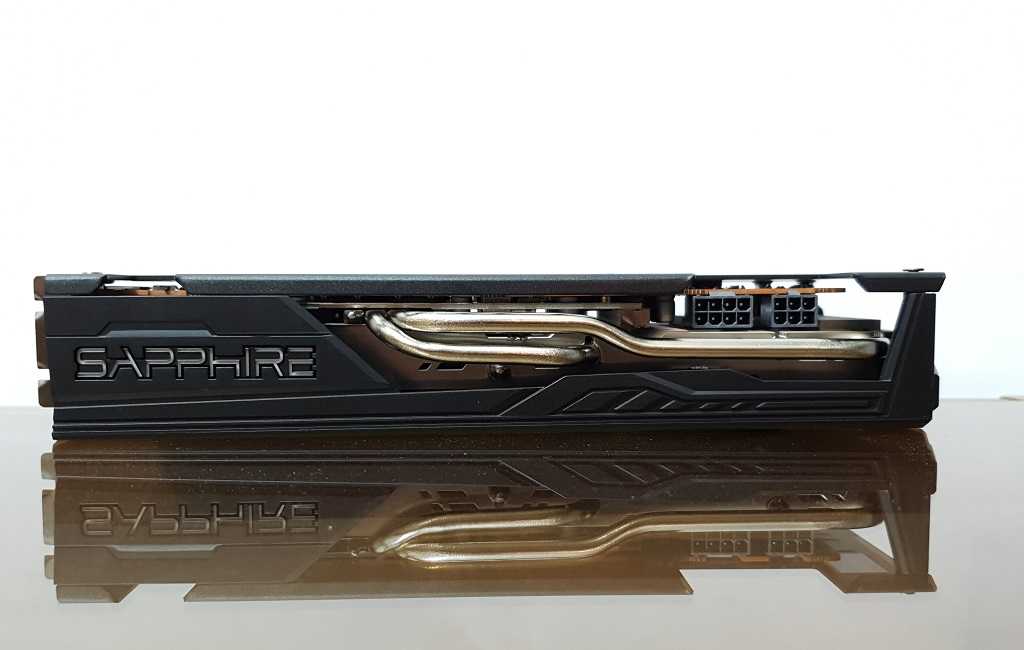 This is what Pulse's looks like Sapphire Looking from the side as if it is installed in a standard case. The logo of Sapphire Turns on red when video card is on. 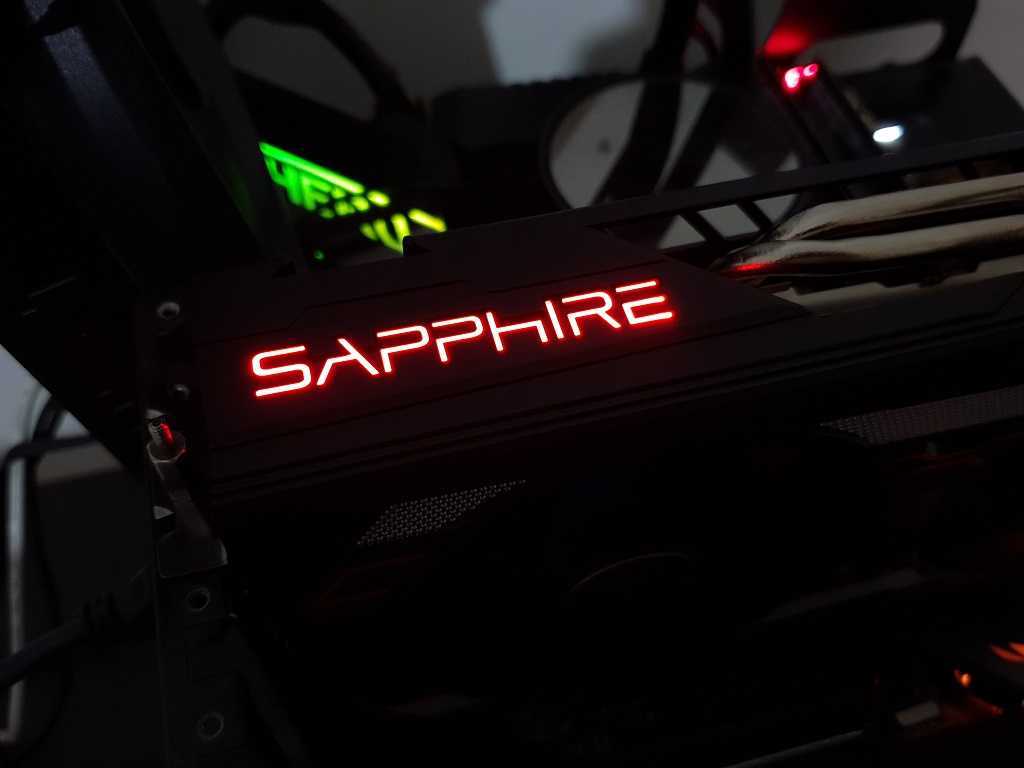 In this review, we will focus primarily on the enhancements of this video card's heat sink compared to the default model of AMD, Since the actual performance difference falls to the standard deviation level as we will present.

Let's focus on what the Pulse offers under the cover with the screw removal. 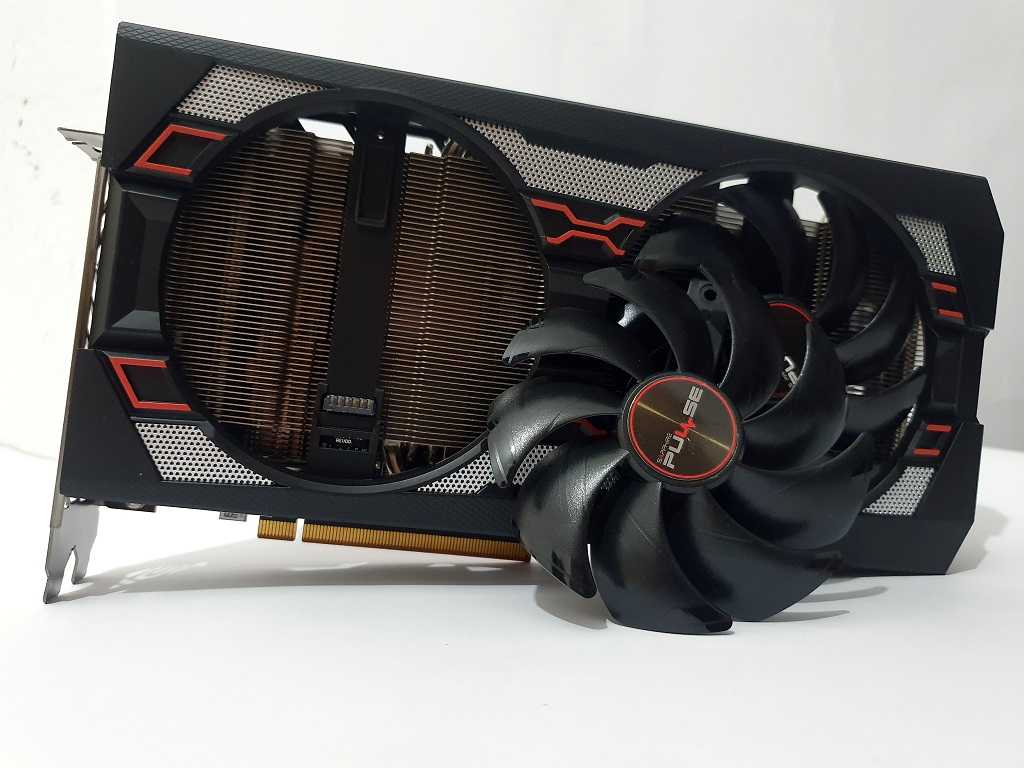 If there is something that gets me a lot of points is the easy ability to maintain and replace parts for a video card. Sapphire Taking the matter very seriously. The fans are easily removable and replaceable by an electric bracket and single screw. No need to open it all Cooling Card or expose sensitive parts to replace fans. This can be done easily by releasing a screw and removing the fan slightly. 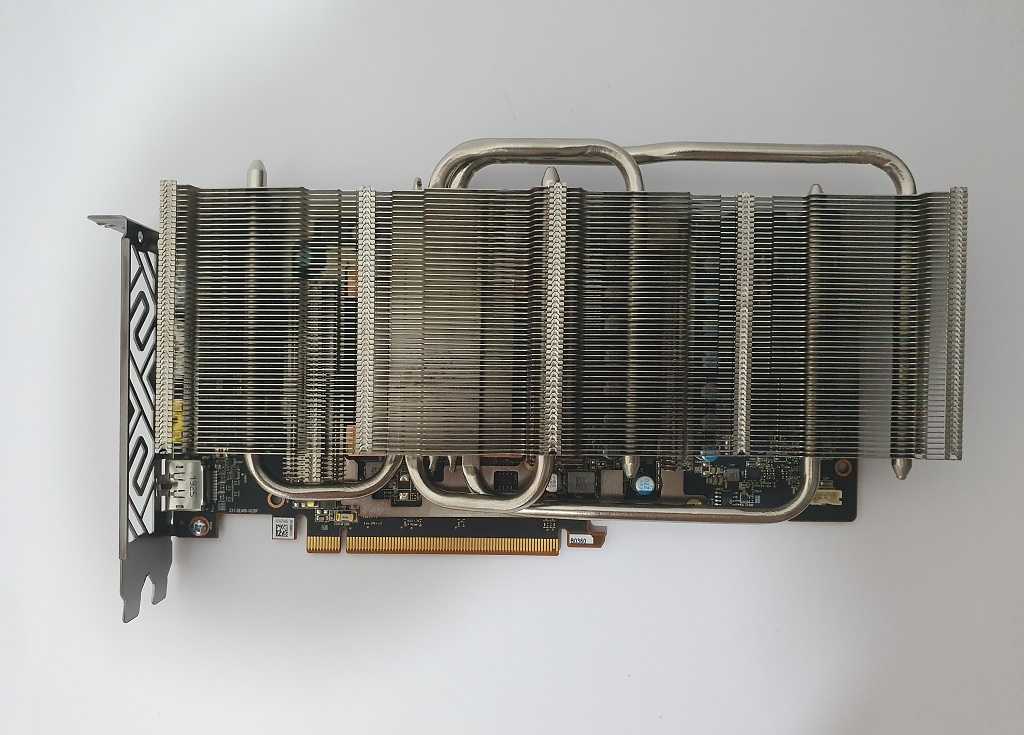 The heat sink for the graphic core has five tubes Cooling Made of copper in nickel plating and many aluminum fans. 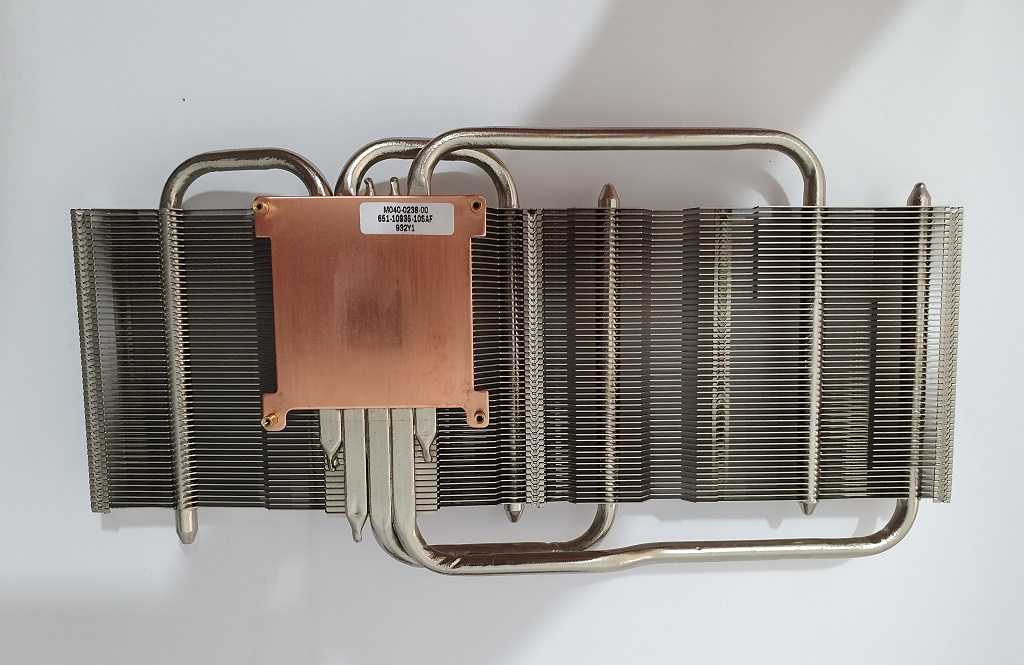 This is what the heat sink looks like when it's disconnected from the core. All pipes come into contact with one copper surface adjacent to the core with thermal ointment. 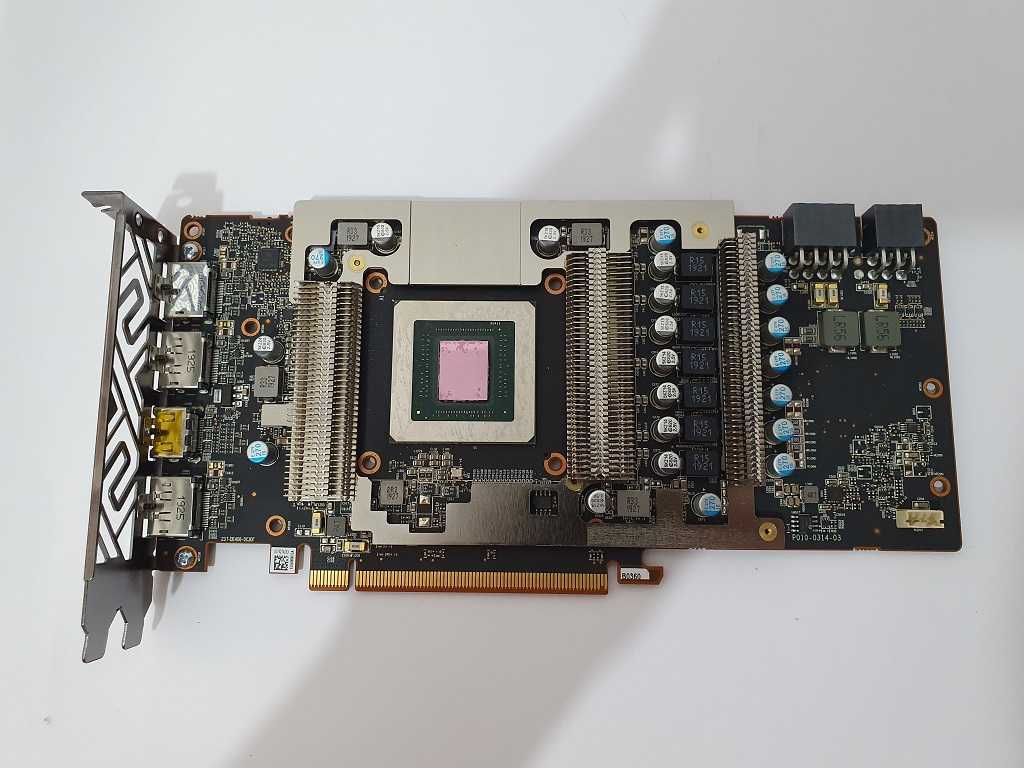 On the graphic memory and voltage stabilizers there is a separate heat conduction plate that receives air from the fans. This design is also very modding friendly if users want to use water cooling or all Cooling One on the core itself. 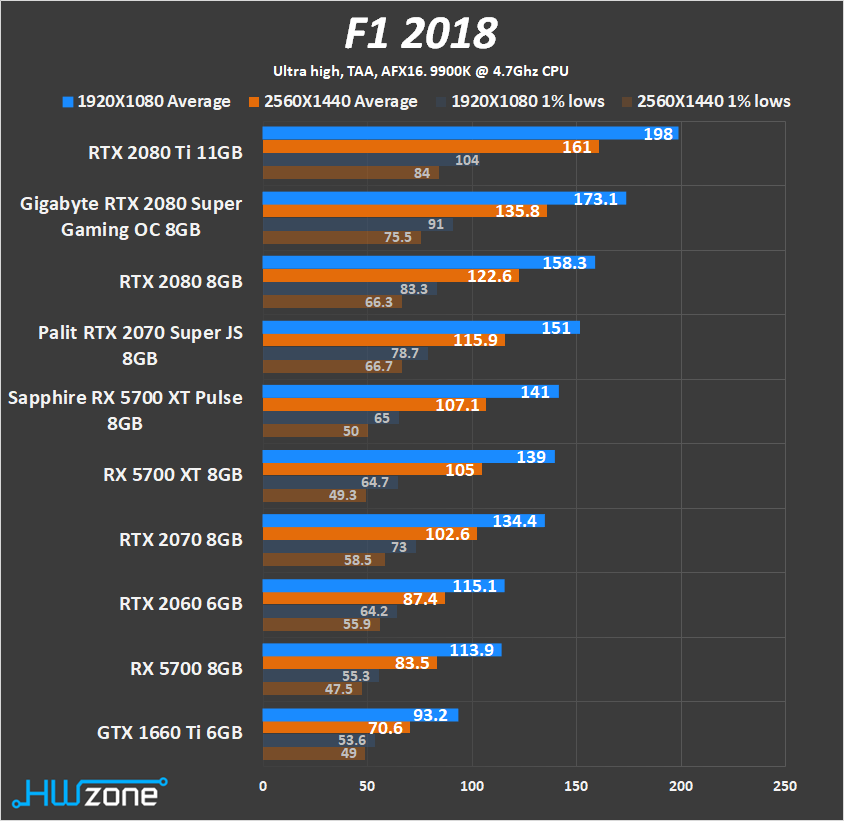 The actual performance difference between the default design and the Pulse model is usually 1-2%, which is a pattern that will be repeated across all performance tests in games: 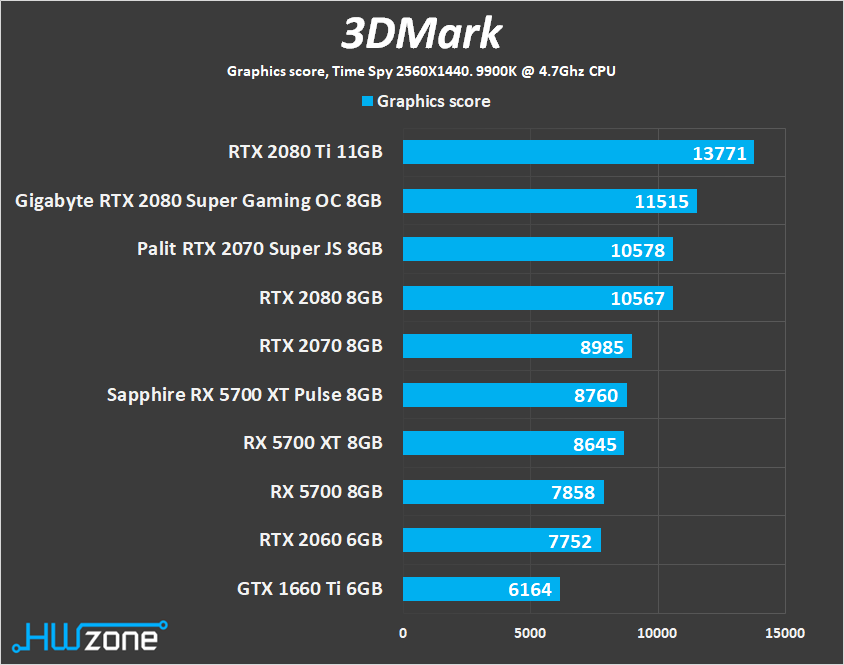 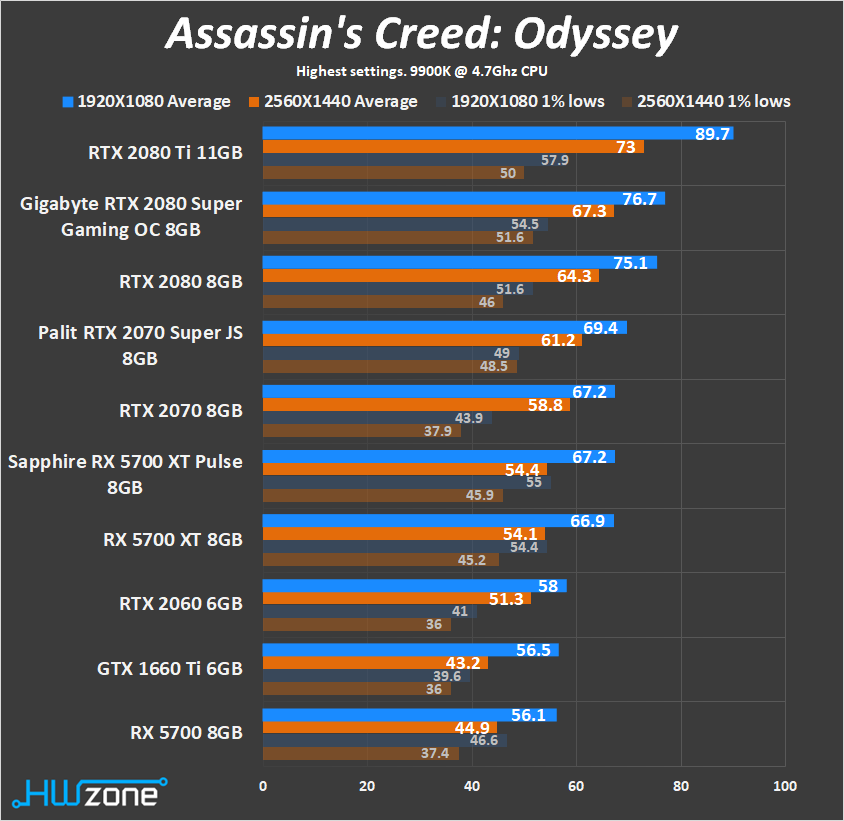 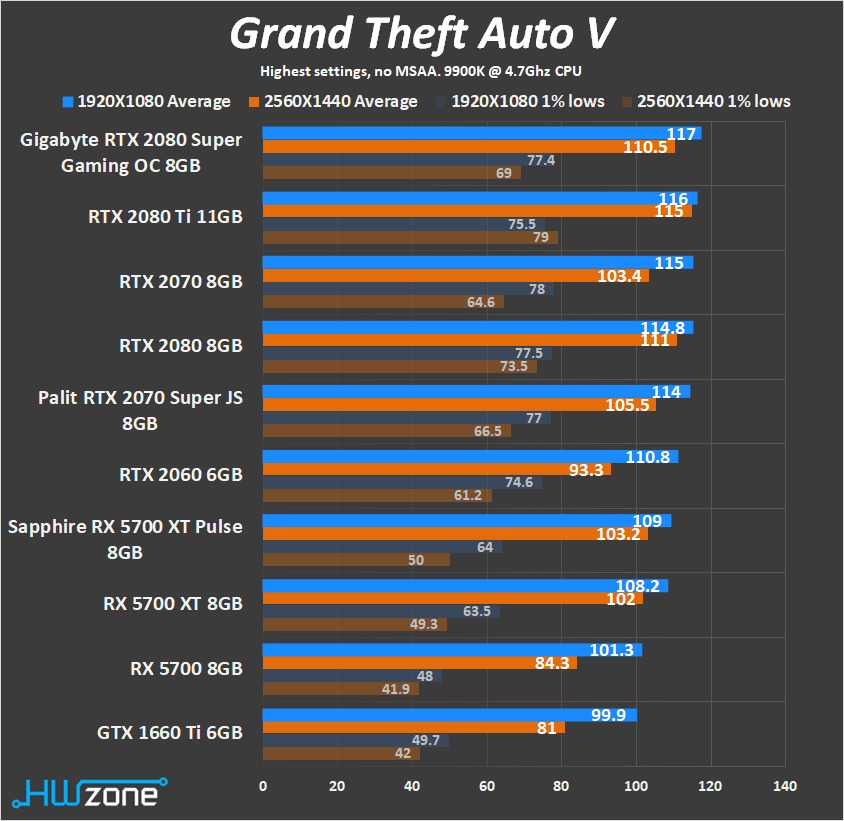 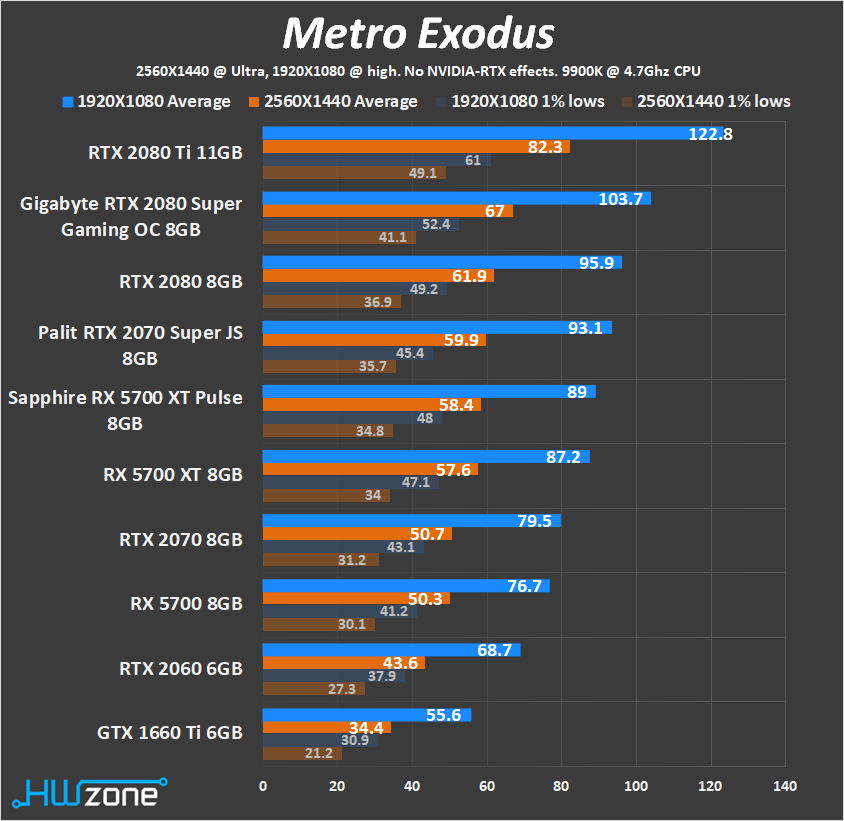 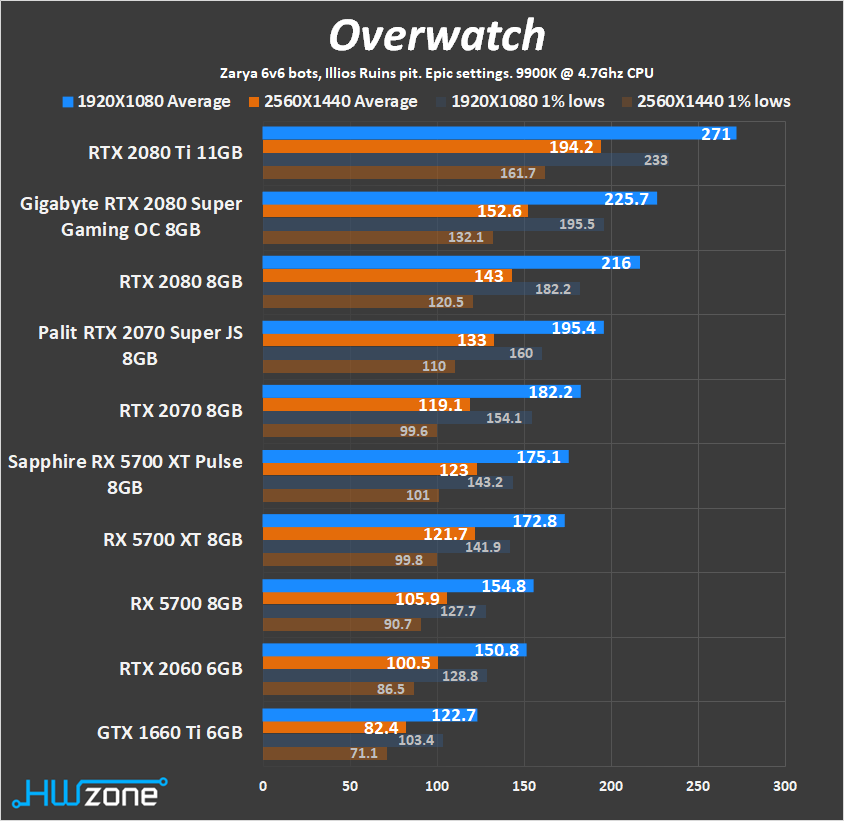 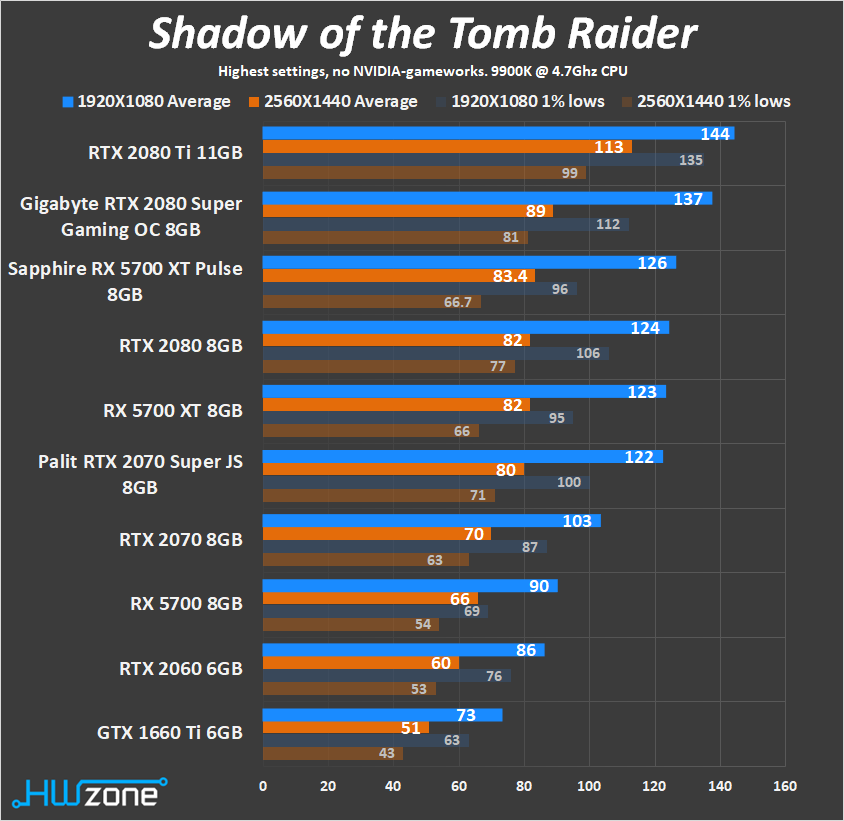 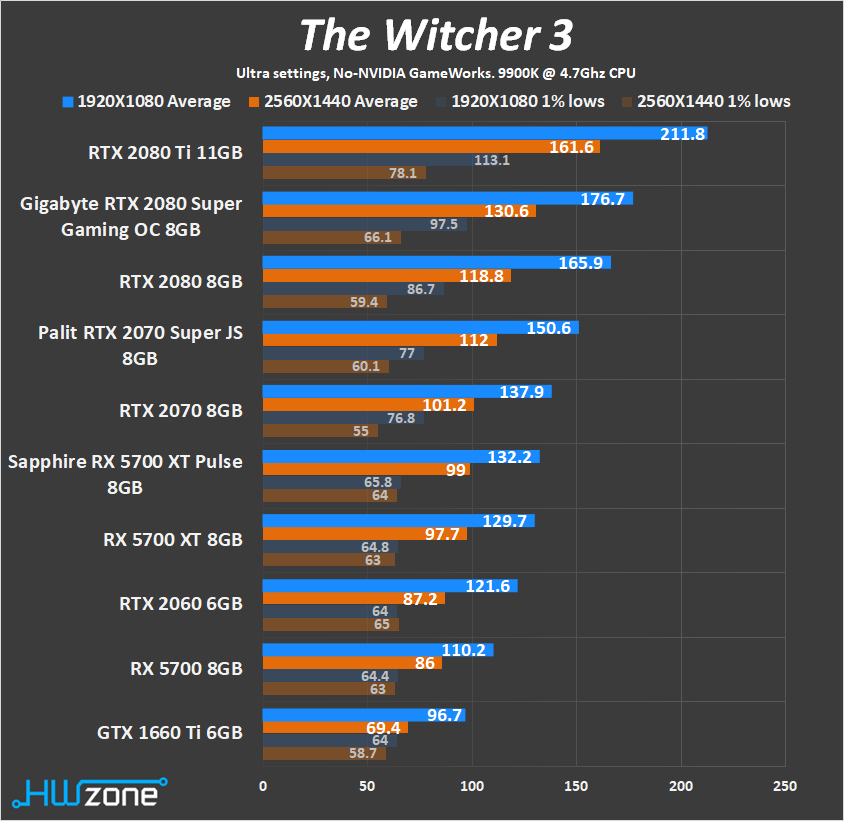 As you can see, the relative differences in performance are not maintained throughout. This is because the actual operating frequency is not significantly lower in the default version. 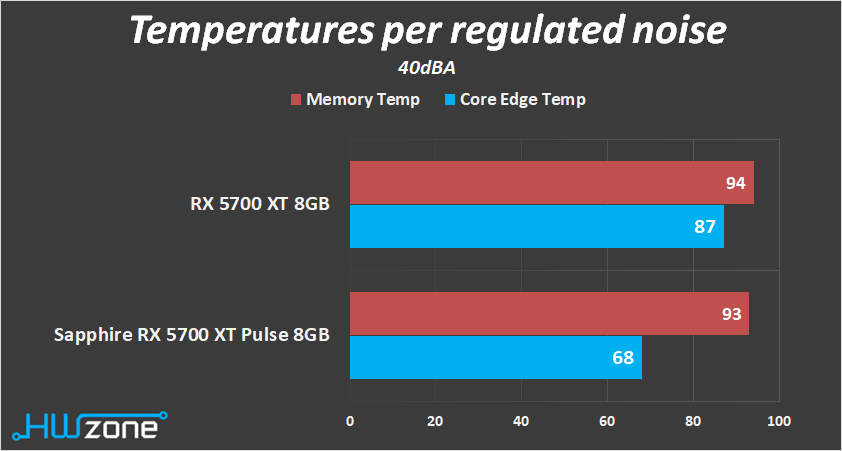 The big difference comes here, in the cooling capacity. To understand how much more efficient Pulse cooling is than the default cooling of AMD, We tuned the maximum noise intensity measured to 40dBA in our noise meter and checked what temperatures are getting.

Edge Temp is the highest temperature measured in the graphical core over any area. The difference in temperature is just as huge, 87 degrees Celsius versus 68 degrees Celsius at room temperature of 26 degrees Celsius. Graphic memory temperature when testing effort is quite similar, as both cards are refrigerated זיכרון In a similar capacity. In practice, outside of a memory-specific effort test, its operating temperature does not exceed the 85 ° C. 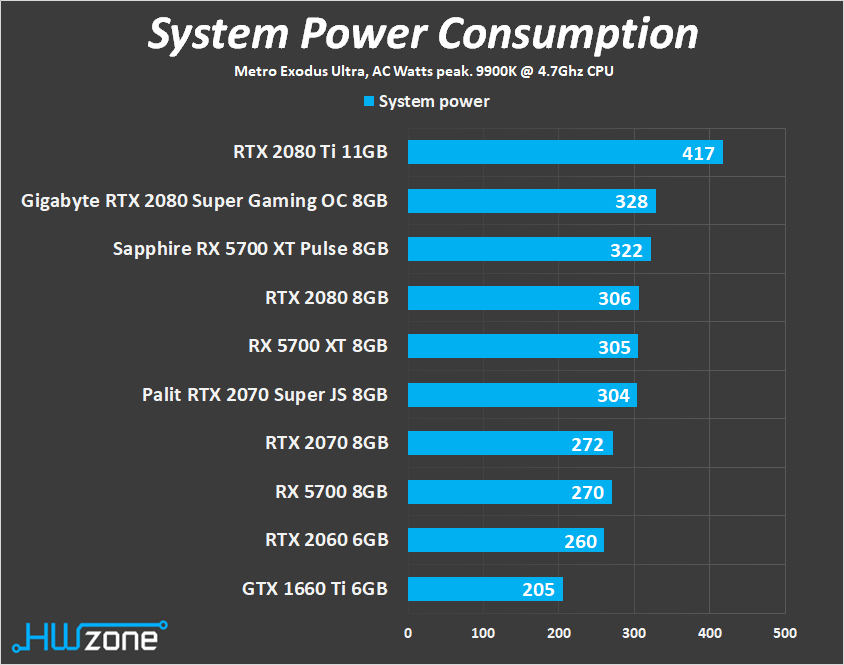 It is important to note that all this, while the card of Sapphire Even shows slightly higher power consumption. Maximum system power consumption during play was measured in 322W AC. My recommendation for such a system would be to provide a quality power supply suitable for 550W of power. You can also go up to 600-650W, since the price difference is usually a few tens of shekels.

In summary, I think the results are self-explanatory. For only 10 dollars Sapphire Gives a new standard that needs to be met in terms of capabilities Cooling For the RX 5700 XT model. I know that there are other models on the market that display coolers with a similar capability at most and request a much more serious premium.

The approach of Sapphire For card maintenance and simplicity in decomposing it is also something I feel needs to be emphasized. Fan replacement is something that many video card models users had to do after a few years. Instead of approaching "our fans are very high quality, no need to worry about replacements", Sapphire Produces a mechanism where ordering and replacement of faulty fans can be done easily and without liability.

Honestly, when I imagined a Pulse model of such a hot card, I thought maybe in the 409 $ badge we wouldn't get Cooling Really advanced, but something a little more modest like we've seen in previous Pulse models. This Pulse is very similar to the Nitro of RX 500 models, which is excellent. I can only imagine how monstrous the Nitro model will look when it launches soon.

I have nothing left but to give a warm recommendation for the cheap, cool and quiet model of Sapphire, The Pulse. It becomes a new standard that should be considered when thinking about RX 5700 XT. The default model becomes irrelevant and non-existent for users.