The new AMD video cards The Radeon RX 6800 XT and Radeon RX 6800 were launched yesterday And the network is still buzzing. It seems that for the first time in many years toAMD It has a relatively competitive product and has a performance worthy of the high market.

In this article we address the power consumption versus performance of the new video cards, specifically to explore the DNA within RDNA2, the architecture that drives them and also the new game consoles Playstation 5 andXbox Series X. 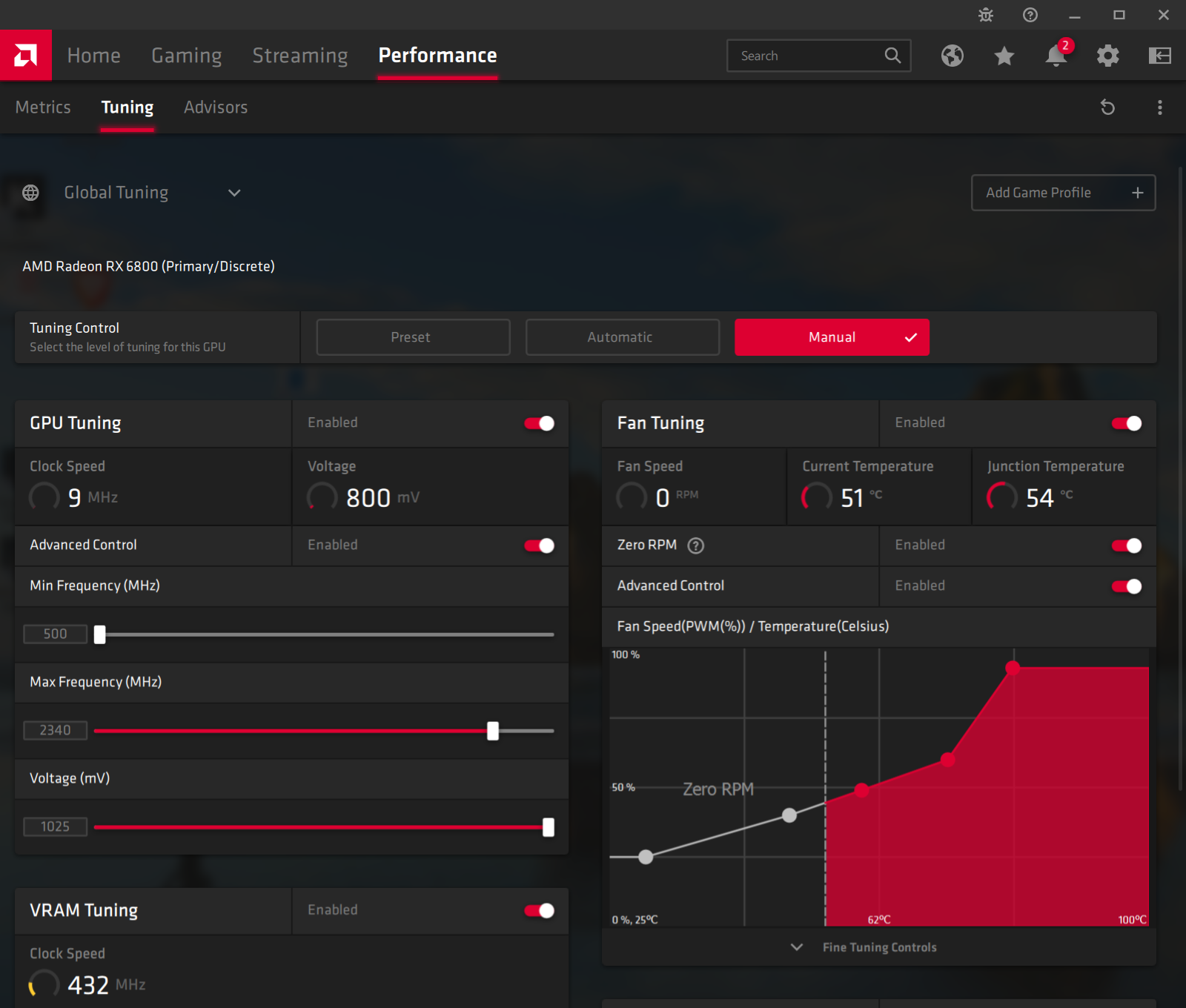 Adrenalin's Software AMD Includes tools The fast And monitoring are not bad at all, and we use them to speed up the new video cards and see what the relationship between operating frequency and power consumption looks like. 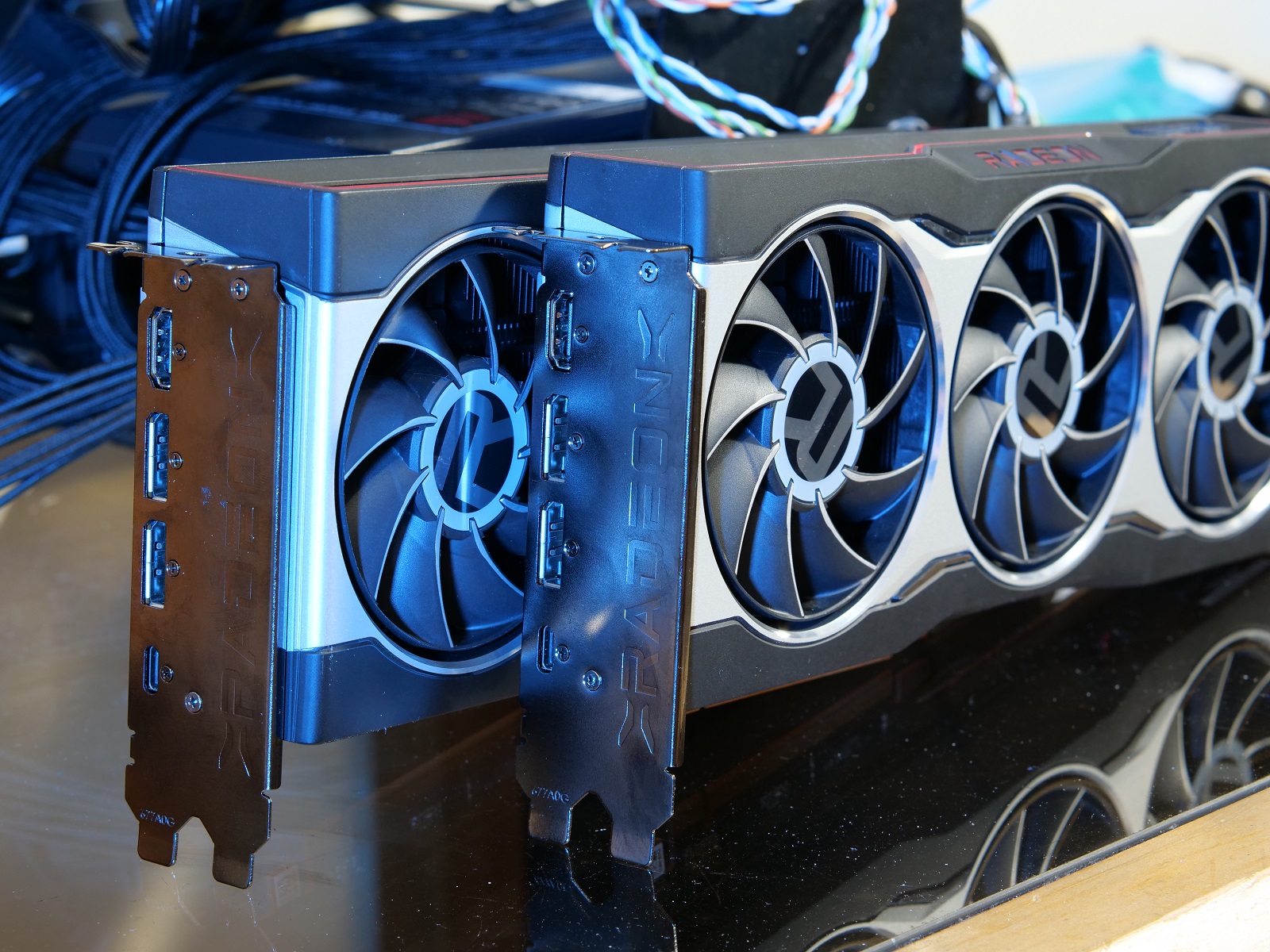 Officially, the heat envelope of the new video cards is 300W for the RX 6800 XT and 250W for the RX 6800. "Heat envelope" or TDP is a bit of a flexible concept, as there is no guarantee that the video cards will not exceed these values, even for a few seconds. For this purpose, you can test them together with the rest of the computer system to see what results you get.

Specifically with the RDNA2 core, it is interesting to examine how achieving a particular operating frequency affects power consumption, especially when adjusting the core voltage to the maximum possible. Just like general computer processors, so do the cores of graphic cards Includes a ratio curve of a certain operating frequency for a certain input voltage to the core.

Just like all chip Another silicon, at some point when wanting to add an operating frequency, requires a significantly higher operating voltage and therefore a decreasing marginal output effect goes into high gear.

In order to ensure during the production of this video card that many silicone samples undergo the stable operation frequency verification process, she decided AMD That the operating voltage of this graphics core at maximum effort will be 1150mV or 1.15V. This is an action voltage that is also the highest that can be determined through Adrenalin software. It is clear to us that this operating voltage can be lower even at the same frequencies, simply due to it being a predetermined high threshold.

עבור Radeon RX 6800 that uses the same graphics core, the amount of active processing groups has been reduced from 72 to only 60. The maximum operating frequency during effort is 2105MHz. The operating voltage for the graphics core is 1025mV or 1.025V, significantly lower than that of the RX 6800 XT and the main part that explains the significant power differences between them.

First mode - like out of the box. In this mode we have not changed any value and the video card produces performance and power output asAMD Designed it

Second mode - maximum overclocking. In this mode we checked what is the highest operating frequency at which the video card can operate. This mode involves using the highest voltage which is by default the default. The memory also passes The fast From 2000 MHz to 2100 MHz in this mode. A fan profile is set to about 10% above a corresponding speed at the same temperature.

Third situation - saving electricity. This is a situation where it will be possible to significantly reduce the power consumption of the video card while losing a relatively small performance. We decided that 7% performance would be the top step for losing performance in order to save electricity

Fourth mode - power optimization. In this mode the goal is to achieve at least the same performance of a "like out of the box" mode, but to make sure that the actual power consumption is as low as possible by lowering the operating voltage of the core.

We use the Metro Exodus game with a resolution of 1440P to test the improvement of speed or state of economy. In the speed of a video card the most important thing is not only to make sure that the system stays stable, but to make sure that the speed actually slows down by measuring performance after each change. At times it may seem as if the video card is operating at a high and steady frequency, but the performance output will be low as a result of a forced lowering of the power consumption. 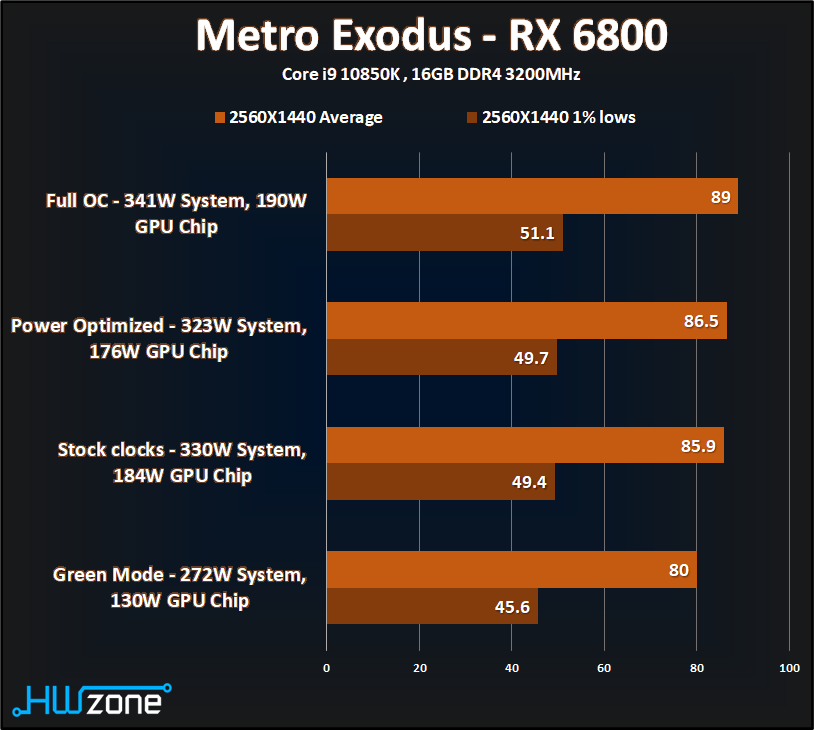 Naturally, a state of Overclocking Full will bring the power consumption of the system to the highest values, in our case 341W. The system performance was also the best with 89FPS on average. In this mode the graphics core reached 190 W at its peak. The actual operating frequency of the RX 6800 was limited to a maximum of 2305MHz in this mode and was found to be stable.

Followed by performance, power optimization mode. Here, slightly better-than-default performance was achieved when power consumption was reduced from 330W to 323W for the entire system. It appears that-AMD Did a pretty good job tuning the RX 6800 XT in the production line if 7W is all we can save in the face of "stock" mode. Power optimization mode brought the graphics core to 2250MHz compared to about 2200MHz by default and from there the tiny performance boost. 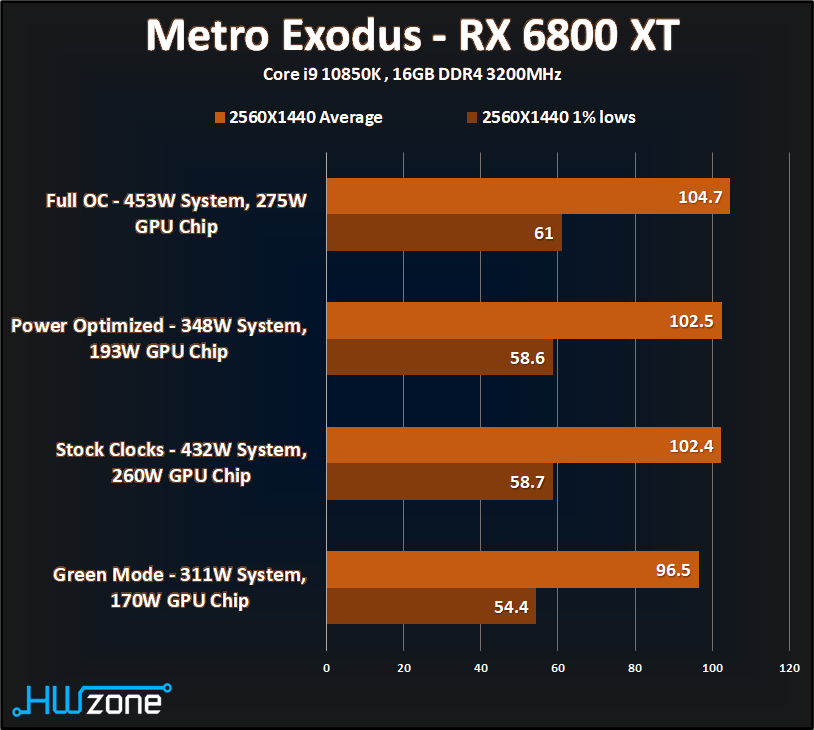 Full overclocking mode brings the power consumption of the test system to 453W, quite high. In return, we add 2.2% performance compared to default mode.

In power optimization the performance remains the same as the default mode, although the power consumption drops dramatically and surprisingly from 432W to 348W. For the same performance the power consumption of the system was reduced by 84 W (!). Forget about getting excited about overclocking, start getting excited about power optimization for this type of product. The operating voltage of the graphics core dropped from 1.15V to 1.04V in this mode. 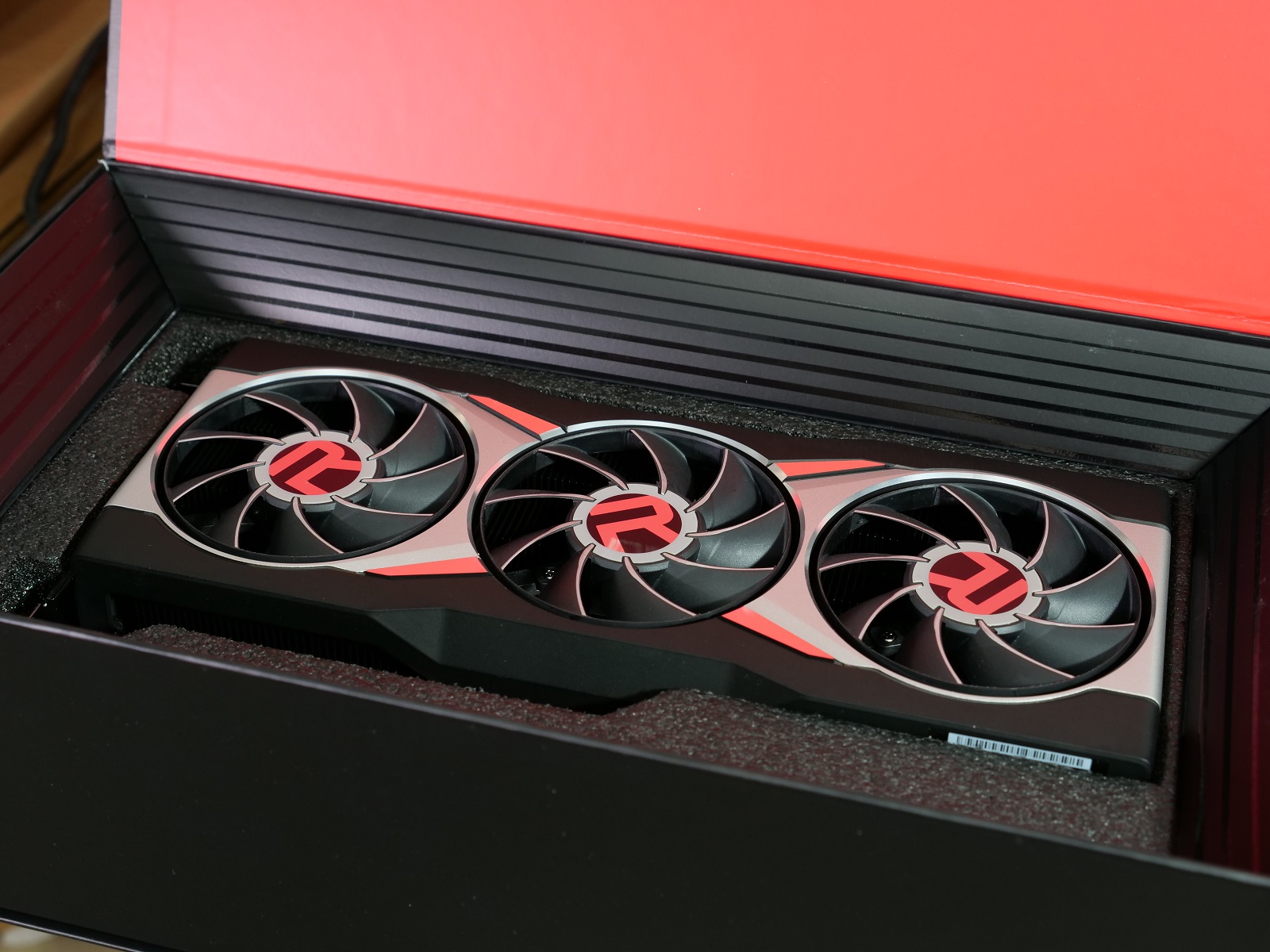 To tell the truth, we do not so much know how to eat the results we see with the new video cards, especially in power saving mode. We expected power improvements when slightly lowering the frequency and reducing voltage accordingly, but we did not expect such far-reaching improvements.

It can be assumed that such a thing is expected in chips that are embedded in game consoles that are ultimately computers in small cases and a limited and relatively low heat envelope. Below are answers to some questions that may arise as a result of the performance results presented.

If the power consumption of these chips is so low when you lower some frequency and voltage, why not use them for cheaper models as well?

It is in the interest of any such product maker to produce the fastest product available, take the piece of silicon created and run it at as high frequencies as possible and achieve good numbers and a large amount of production. There is not much economic logic in purchasing a large silicone area without realizing its full potential. The various turbo and boost technologies are not only designed to serve the user but also the manufacturer in producing maximum performance from the chip. For the preparation of cheaper video cards, use AMD In smaller silicon and it will accelerate to as high a frequency as possible in mass production.

What is the use of situations like power optimization or power saving?

There are several benefits to performing operations such as power optimization and power saving mode. After setting such profiles in the software of AMD, A single button press toggles between modes. In addition to the power savings themselves, lower heat dissipation leads to a higher level of quietness, and in the computer case other components will also be affected by more comfortable ambient temperatures. Everyone benefits. One could even argue that the lifespan of hardware is expected to improve as a result of such a move. A user who switches between lighter and heavier games will find use for a quick transition between the different modes.

Is it possible to take your results and apply them directly to me?

It is important to know that not every graphic core is created in exactly the same way. The values ​​we received are with the video cards we received. It is very possible that the application of these settings in your video cards will work perfectly, and it is also possible that there will be instability and the user will have to make his own adjustment. Adrenalin's Software AMD Very friendly to carry Overclocking Of the video card.

We hope some readers will be able to extract a thing or two from this piece of information. We have certainly learned about the ability of RDNA2 to be very electrically efficient even for those unfamiliar with giving up high performance.