The first of our third-party versions

You can already feel the year 2020 coming to an end, and with the end of the year there is also a celebration of shopping and the launch of many hardware products. One of those products comes to us for review before it becomes widely available.

Aside from the graphics card performance, this is actually the highlight of the recent era. We have had to repeat the same mantras recently with the wave of hardware launches of recent weeks. Usually at times as usual the launch day arrives, various reviews land, and a consumer can go to one of the computer stores from the country or overseas and simply place an order at the same price or close to the recommended official price.

This time, under the lens of the lens there is a product with extremely low availability worldwide, which will get to recover mainly in the first quarter of the coming year. It is difficult to find a positive side when launching hardware mostly happens on paper, but at least the various users will have the knowledge to know what they are buying before it becomes available. 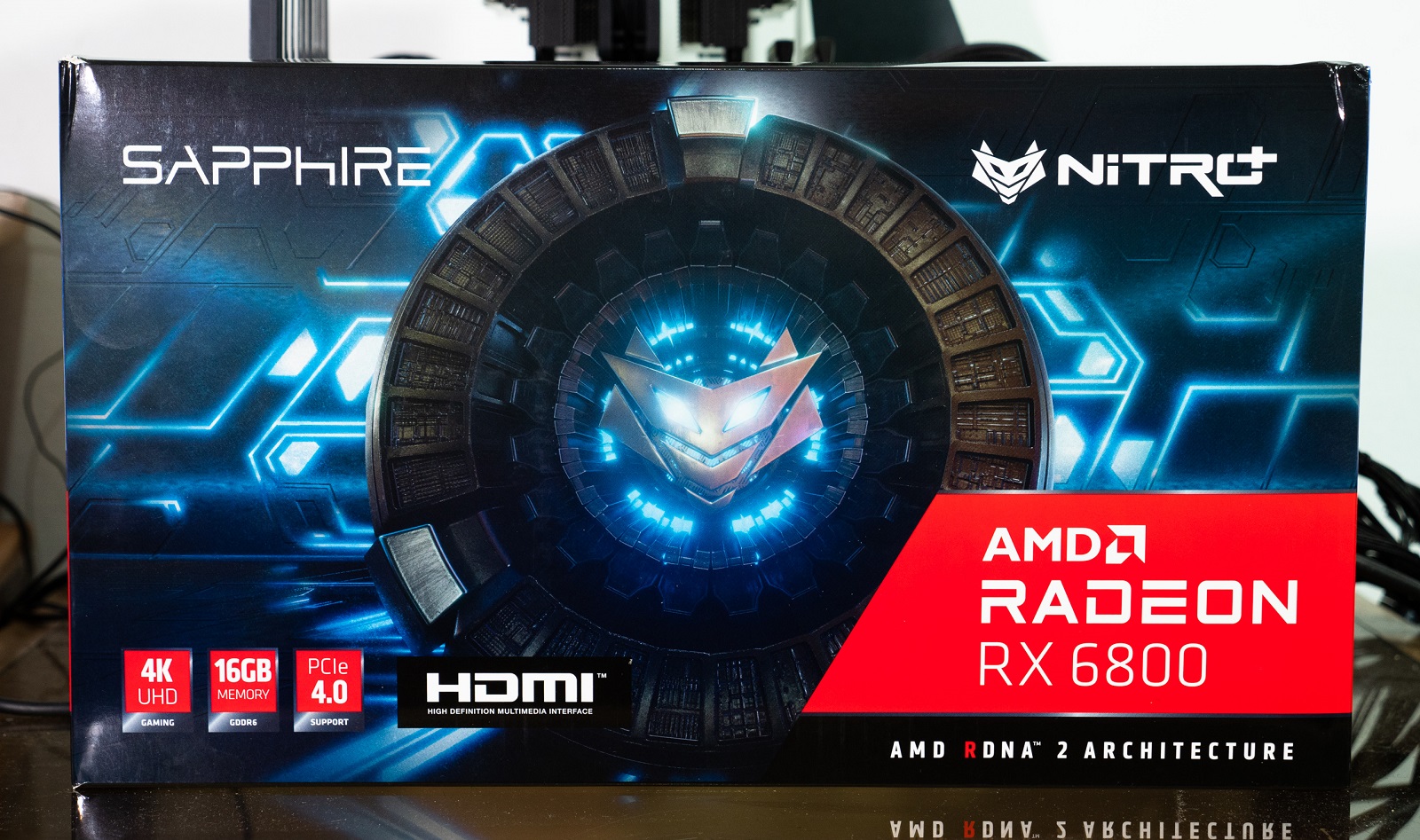 Hardware maker Sapphire is most identified with graphics cards AMD And formerly ATI. The combination of Sapphire and Radeon has been common and known in the industry for nearly 20 years. Sapphire also has a respectable history in other hardware products, such as motherboards, minicomputers and its multimedia products. Recently, Sapphire products can also be found in the embedded world, with based products AMD RYZEN.

Among the various Sapphire series in recent years, we have been exposed to two that symbolize the two common quality ranks of the company. One is called Pulse and the other is called Nitro. The Pulse series symbolizes the replacement for the default versions of AMD And usually comes at or near the basic official price. The Nitro series is the one that for an extra price upgrades the printed circuit board and cooling normally. The Nitro series will always be more advanced than the Pulse series.

AMD recently launched a new series of video cards, the Radeon RX 6800. In our launch review You will find extensive details about the technologies, RDNA2 architecture and the way AMD Built Core A graphic capable of making a significant leap in capabilities compared to the previous generation.

The official price of theRadeon The RX 6800 is $ 579. If a Pulse version had been released, it would probably have emerged at a price of $ 579-589. Based on what we have seen so far with the Nitro versions, it is likely that in a revised market situation this video card will be priced at about $ 619. Currently the availability is low, and units will be found at great prices.

The theme of this video card is quite neutral. There is not much color here, and especially gray, black and silver. Introduced this design Sapphire For the first time in the previous generation with the RX 5700 series. It can definitely be said that it looks a little different from other video cards, so at least here come the points forSapphire. A recently born trend is the use of my body Cooling Elongated and ventilated through and out of the back of the video card. Here too you can see the use of this trend. In the past the ratio between the length of the printed circuit board and the heat sink was close, but as long as the body could be supported Cooling Great and earn some performance, why not.

This video card is configured for a 290W heat envelope, compared to 250W for the default version and requires two 8PIN power connectors. The reason for the increase in heat envelope comes from the increase in operating frequencies. The base frequency of the graphics core was increased from 1815 MHz to 1980 MHz. The full boost frequency was increased from 2105 MHz to 2190 MHz. 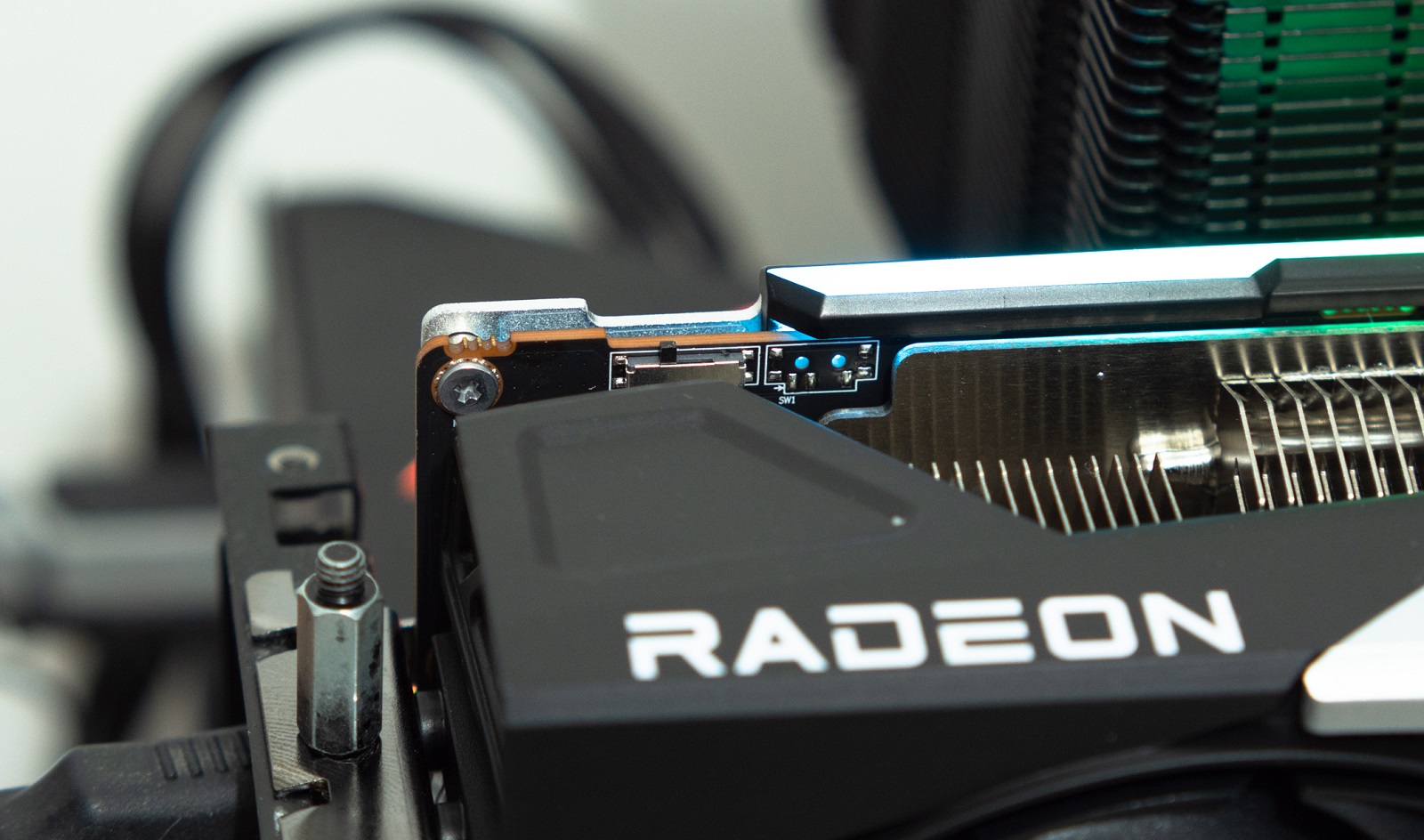 A nice and not very common feature that this video card has is a dual BIOS switch. Advanced users can burn and change various operating settings while turning on the computer. Of course it is important to note that Andrenalin software, the driver of AMD For video cards, allows profiles that can be easily activated for custom watches and fan speeds. Therefore, the relevance of a dual BIOS switch is slightly less high than it was in the past. Still, a nice tribute. 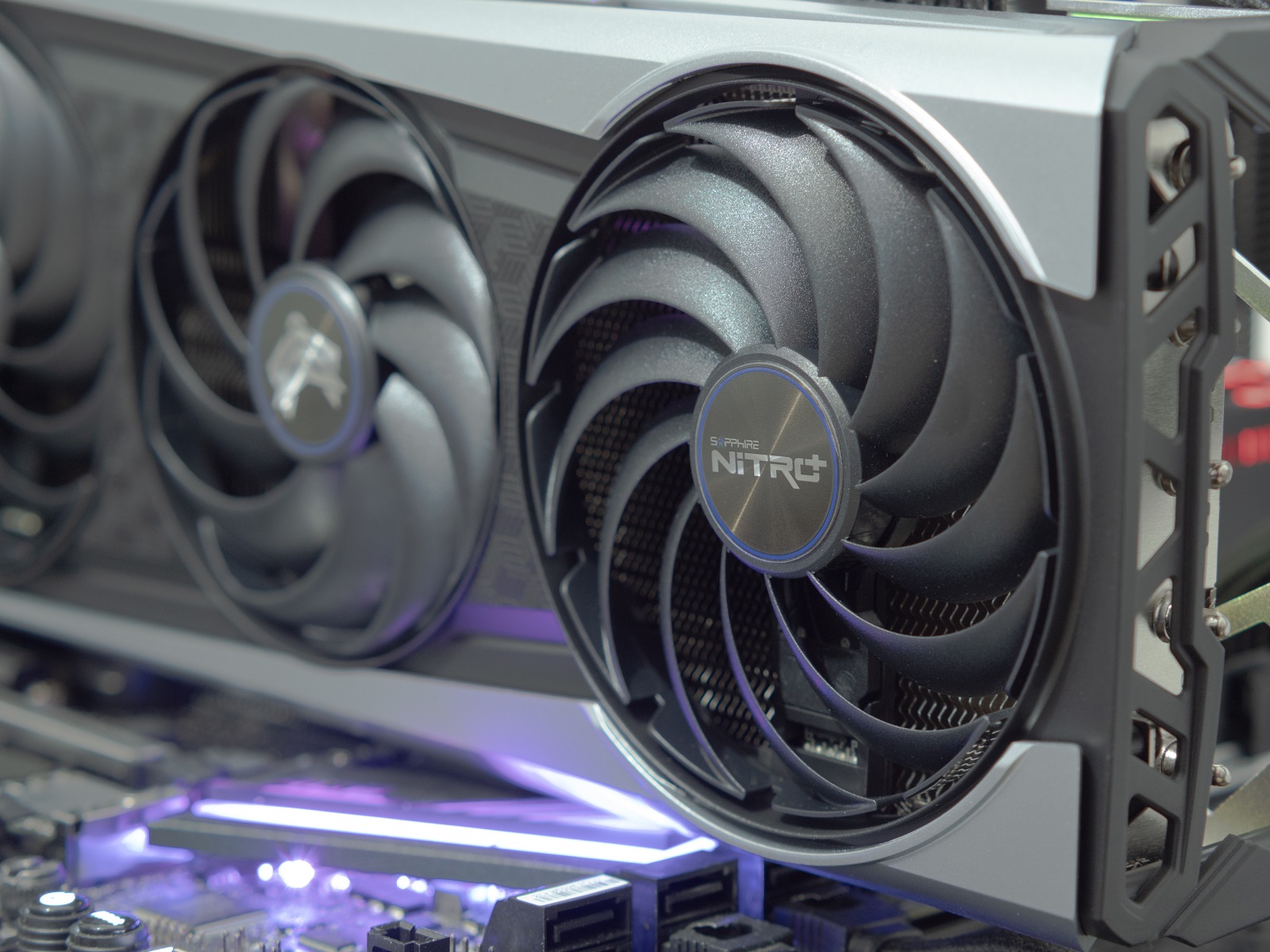 This video card has three fans, two large ones 100 millimeters high and one smaller in the center 90 millimeters high. These fans apply all the hot trends of the world of video card fans like fans attached at the end, high number of blades and double bearing. 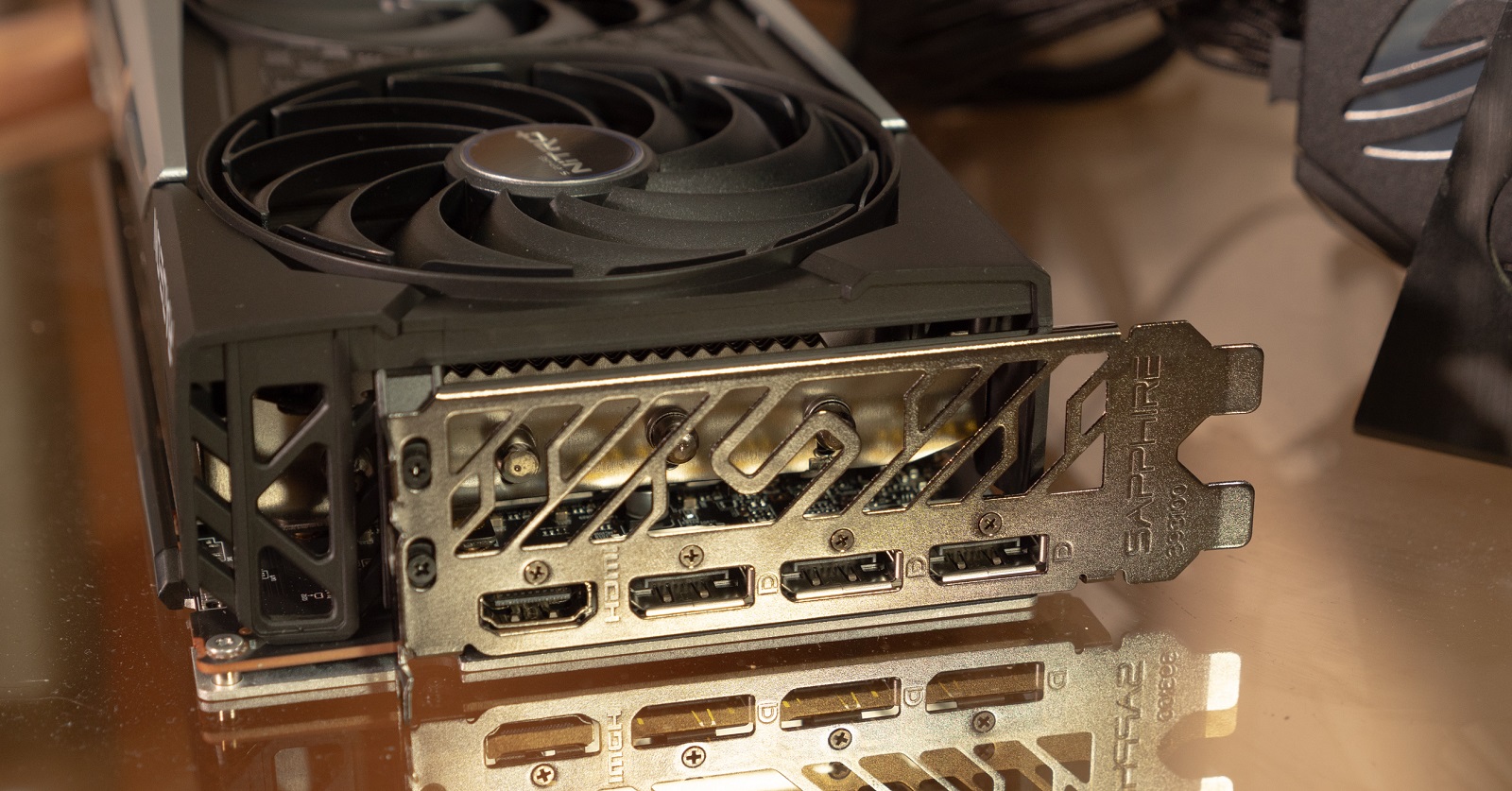 The display interfaces on the card are slightly different from what you encounter in the default version. There are three ports here DisplayPort 1.4 and HDMI port 2.1. You will not find it here USB Type-C with VirtualLink protocol for binoculars Virtual Reality. 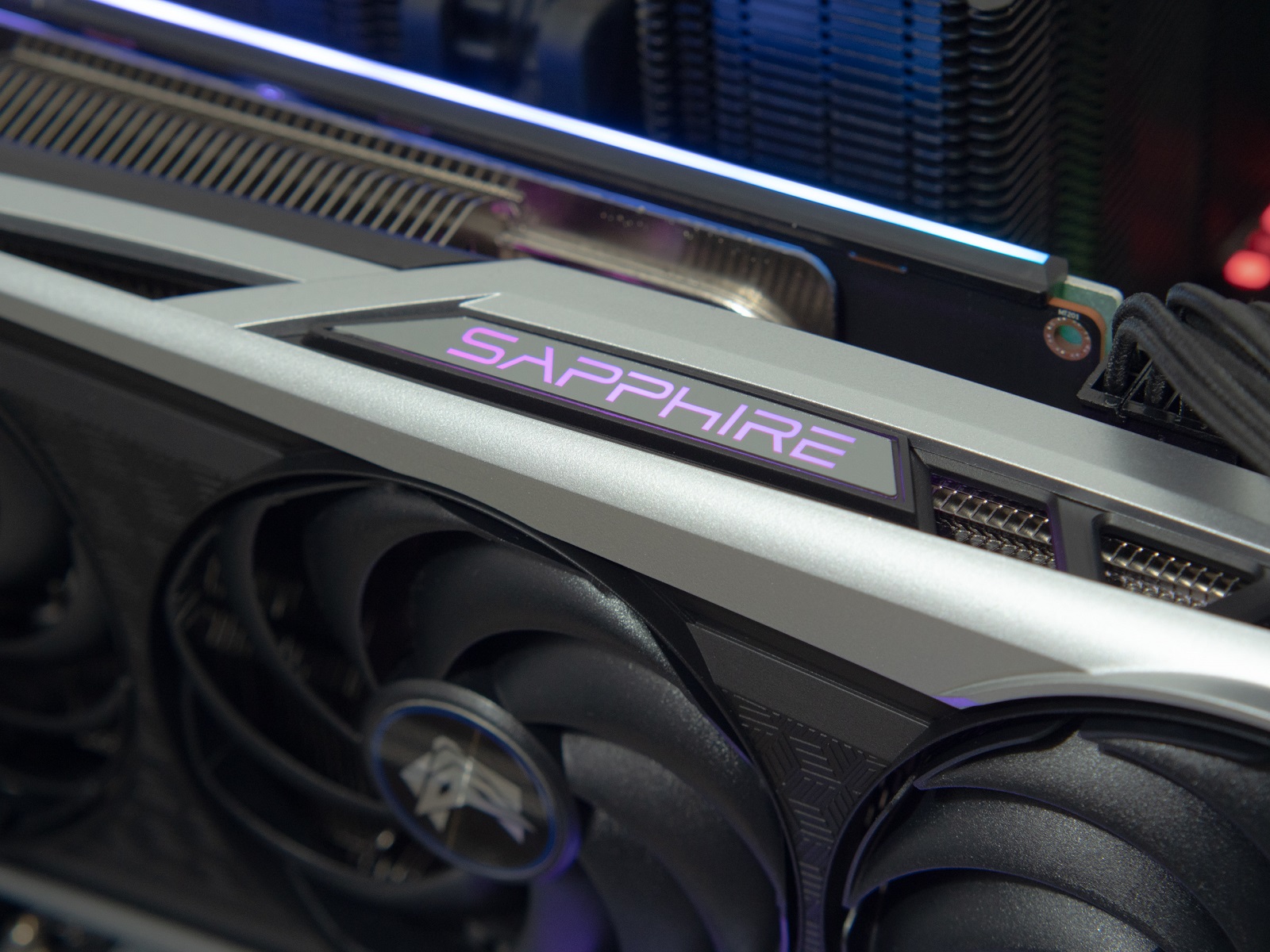 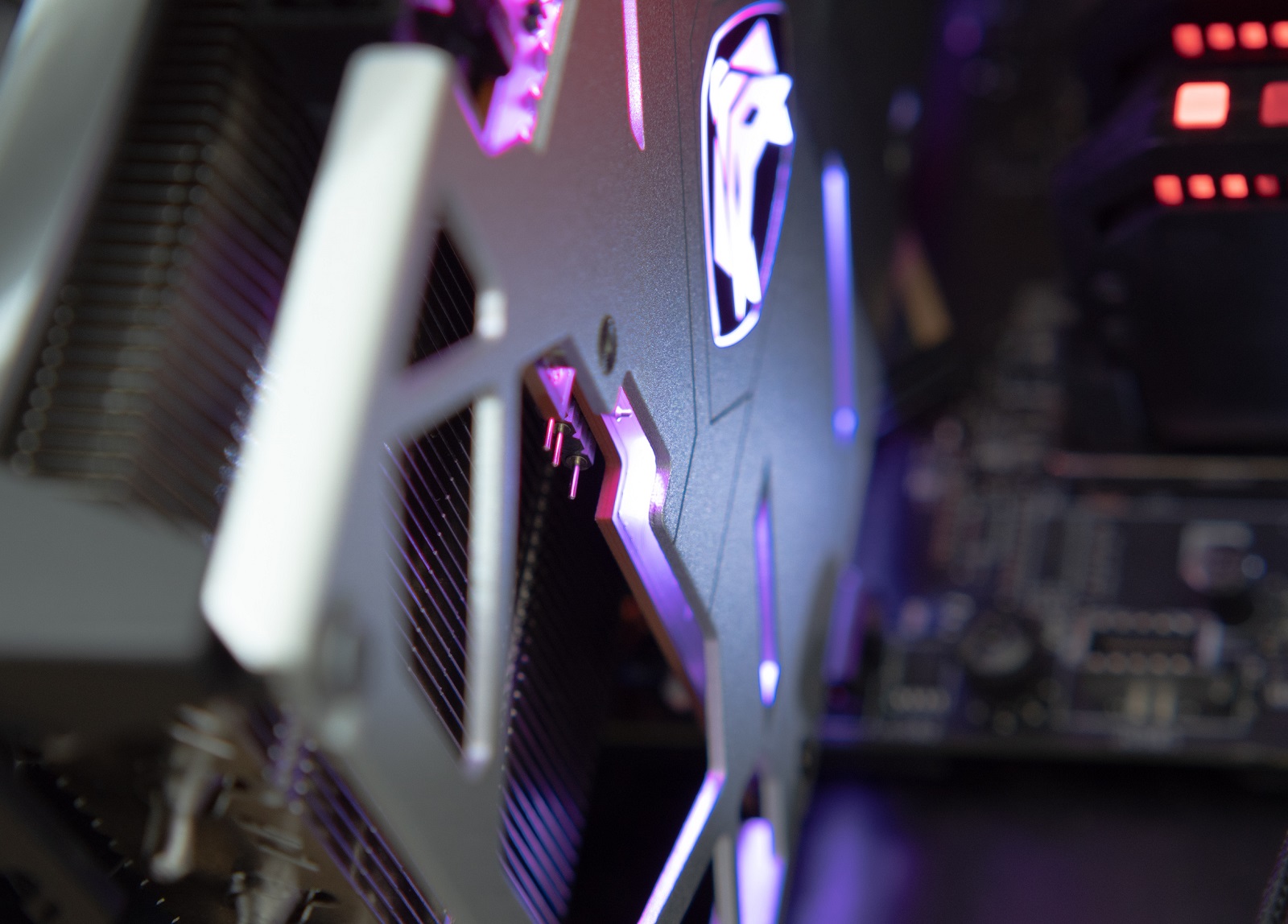 There is even an RGB connector on the back of the video card to sync colors with additional hardware on the computer. Through software Sapphire TRIXX can be cooked on the bulbs.

Without exaggerating too much in words, he approached the performance tests.