What will the Skylake era bring us in the family of the "Core The most economical and efficient? The answers are inside

One of the most significant revolutions brought about by Intel's Broadwell generation was the new Core M processor family, which took the ultra-economical Y subprocess processors and made them even more compact - so much so that they could actually run tablets that were no different in size and weight From those based on chips ARM And run a system Android או iOS.

The performance, obviously, was not spectacular and in the context of birth cords even had difficulty running basic functions in the Windows system in some cases - but the ability to get a computer Windows A whole that is very thin and quiet was wonderful. And unprecedented.

Now we get the technical details about the second-generation Core M processors, from today's Skylake era Intel, Which purports to take full advantage of the 14 nm manufacturing process and become the most prominent mobile product in the wide variety of chipset. Do they have a chance of succeeding on the mission, or do we expect another generation that looks great but operates in a very mediocre way? Feel free to judge for yourself.

The initial supply of the next generationCore The new M will feature four different models, all of which are double Core With HyperThreading support for four virtual cores and a basic power envelope of 4.5 watts, which can be reduced to only 3 watts or swell to 7 watts if the manufacturer that incorporates the processor in its product wants it.

The most advanced model will be theCore m7 6Y75, where you will find a base frequency of 1.2GHz and a turbocharged frequency of up to 3.1GHz, which is higher in 200MHz than the maximum working frequency we have seen in the processors Core M to date.

The high difference between the basic operating frequencies and turbo frequencies is due to an increasingly significant approach in the world of mobile devices called Race to Sleep, where the goal is to provide high-power burst processing power for a very limited time under a low thermal envelope to complete the mission at peak speed and return to frequencies Low rest without significantly warming the components.

As you can see, this method is very useful for common everyday uses such as browsing and playing media files, but will be much less effective in applications that require significant processing power over time such as gaming, running performance tests or rendering. Ideally, the Core M processors will probably have pretty low results in the various synthetic performance tests, but in practice they can provide a general user experience that will not fall below that of Processors Mobile With a higher thermal envelope than 3 and more. 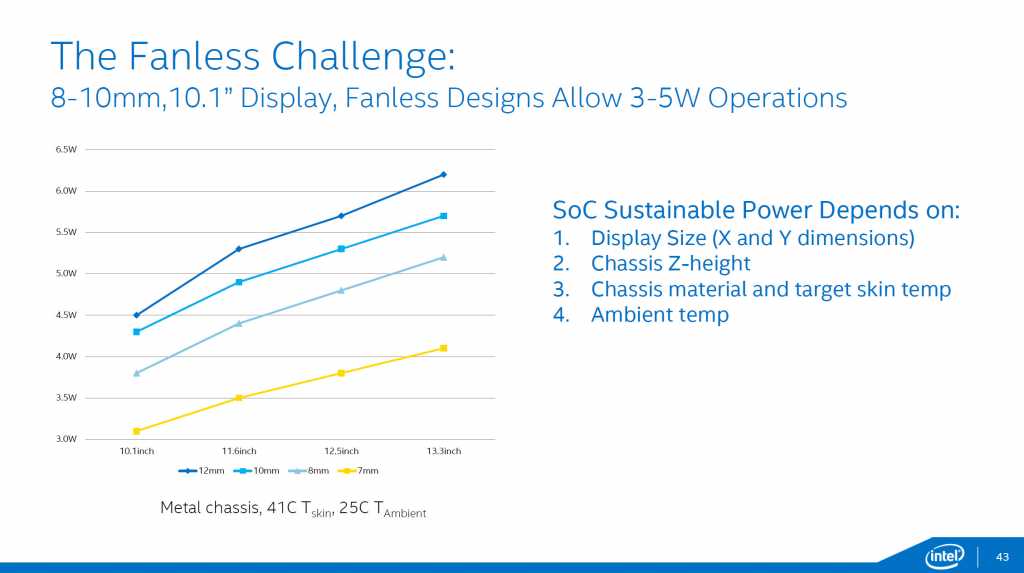 All models will feature 10 PCI-Express 3.0 channels for communication with all system components (storage, network, and other connectivity) to support a pair of 3.0 SATA connections (for 2.5-based or mechanical flash-based drives) up to six 2.0 and USB 3.0 And also connecting the eMMC 5.0 standard for solutions storage Cost-effective and even more compact. It is likely that we will also see a channel or two dedicated to connecting to my drives storage In the current M.2 standard, but this is not officially listed at this time. 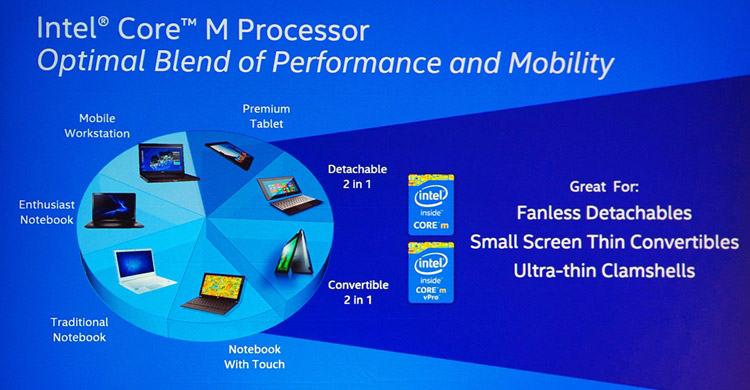 All models will offer a built-in HD Graphics 515 graphics core, which will include 24 generation units of the ninth generation,DirectX 12 with high DX12_1 characterization and support for resolutions up to 4K. The core will operate at an 350MHz base frequency in all cases, and you can reach a maximum operating frequency of 850MHzCore m3 6Y30) on the 900MHzCore m5 6Y54 andCore m5 6Y57) or 1,000MHz on the modelCore m7 6Y75 upper.

We do not yet know what the prices of the processors will be.Core M systems, which will be officially launched in the coming month,Core M of theBroadwell It can be assumed that the basic model will cost manufacturers over $ 200, while the most advanced model may approach the $ 400 threshold and will be used mainly for premium devices that claim to provide the thinness and silence in question with minimal performance damage (compared to the slightly less economical U processor).

Sounds great or unnecessary just like it used to today? We would appreciate your feedback.