The 3D Xpoint technology from Intel and Micron is the hardware revolution we've been waiting for?

The two giant companies have announced innovative technology to store information without the need for transistors, which threatens to turn both the flash and the flash Memories The DRAM is obsolete, already within a year from now

More than once we have heard announcements about technologies in the past memory Breakthroughs that will improve all the capabilities we know by dozens of counters, and without any negative consequences. However, when the one behind such a declaration is a pair of giant companies that manufacture chips memory Massively as part of a diary routine (and not an anonymous start-up company or a group of researchers from one university or another) - this is a several times more significant move. And that's exactly what we get today.

Intel and Micron, the two giant American companies that are partners in a project to manufacture flash chips NAND, Unveiled a new non-volatile memory technology called 3D Xpoint, which claims to offer latency times that are only one-thousandth of what we've ever known,NAND (Ie, data which are very close to those of Memories DRAM), plus a lifespan that will be 1,000 times longer than that of up-to-date DRAM chips, and a particularly large three-dimensional density. In short, the best of all worlds. 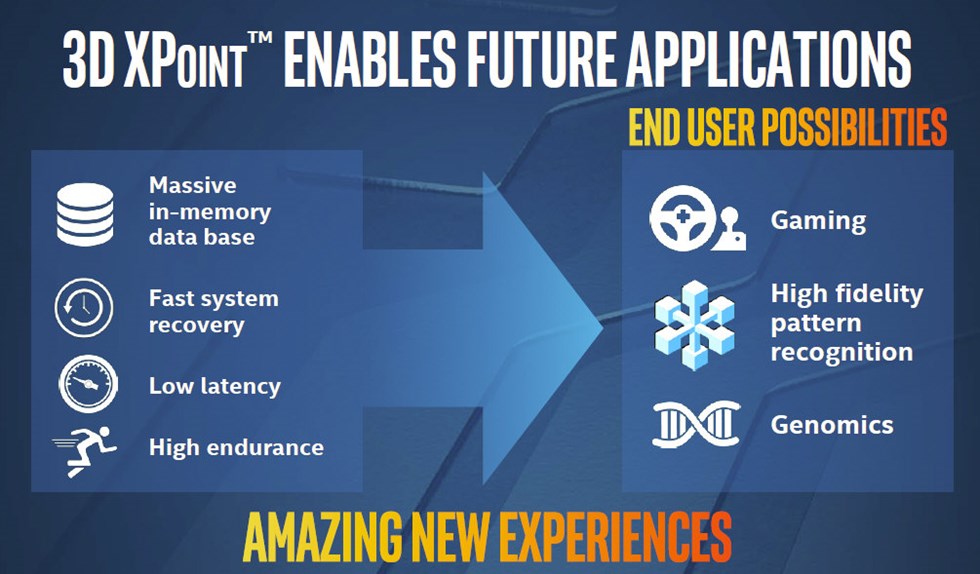 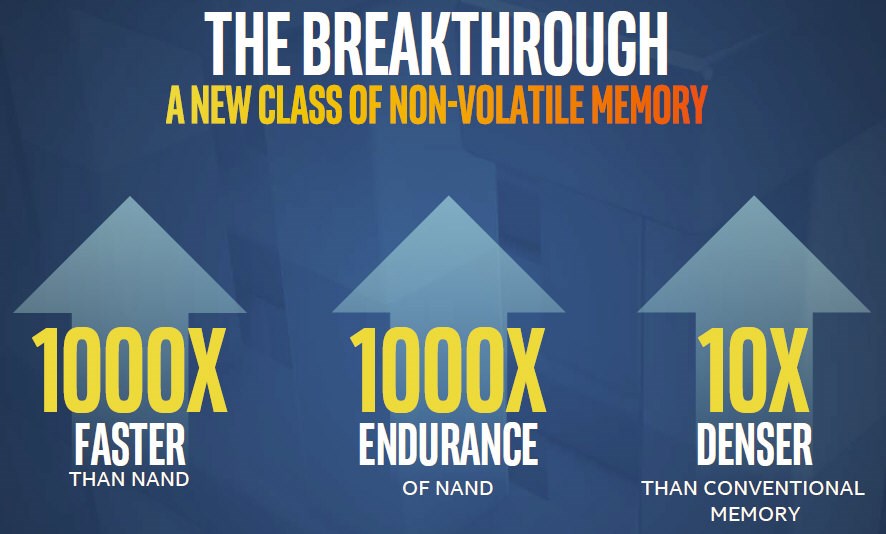 The great uniqueness of the3D Xpoint Is that there is no "capture" of electrons here for the purpose of storing the digital information on the medium - there are no transistors at all, in fact, but a two-and-a-half weave of conductive lines (called Bit Lines and Word Lines) and between them material that changes its physical properties. Potentials fit at its edges, and the difference between the modes is what defines whether it is a binary type '0' or a binary type '1', and allows the actual information to be stored.

This essential change in the arithmetic enables each memory cell to be accessed separately, thus enabling the tremendous improvement in the time of stay (and performance, as a direct derivative) that Intel and Micron speak of. 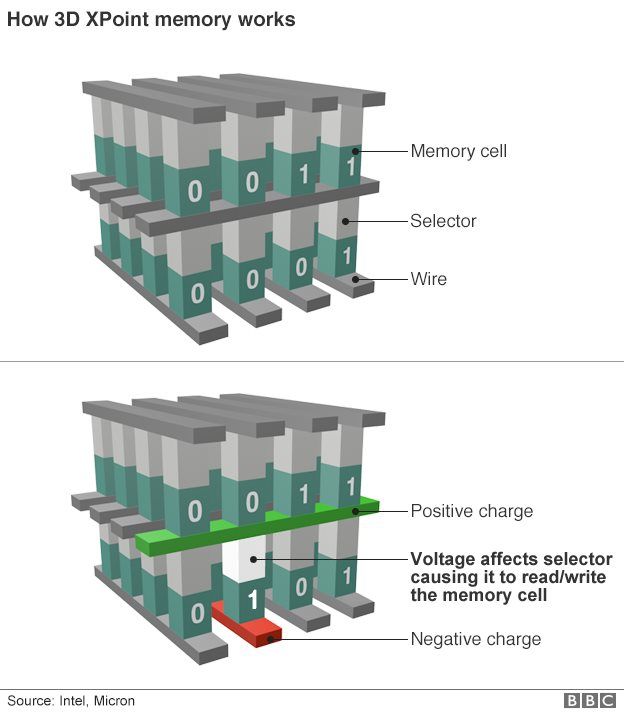 According to the basic description of the technology, we hypothesized that this is a three-dimensional upgrade of the Phase Change Memory technology in the development of a micron deal, in which the operation of the voltage allows changing the atomic structure of a Mamorphic silica element to crystalline (from messengers to regular) storage The information, but Intel has stated in the framework meeting Journalists about the announcement that this is not about PCM technology.

Therefore, our second assessment is that it was here then Technology From the RRAM family, or ReRAM (RTR Resistive Random Access Memory), in which the potential difference on dielectric oxide creates a movement of oxygen atoms that substantially changes the resistance of the material that allows a distinction between '0' and '1' for information - When it is possible that Intel uses one of the oxides that it has researched and developed in the framework of its processor manufacturing business - the phenium oxide, for example. 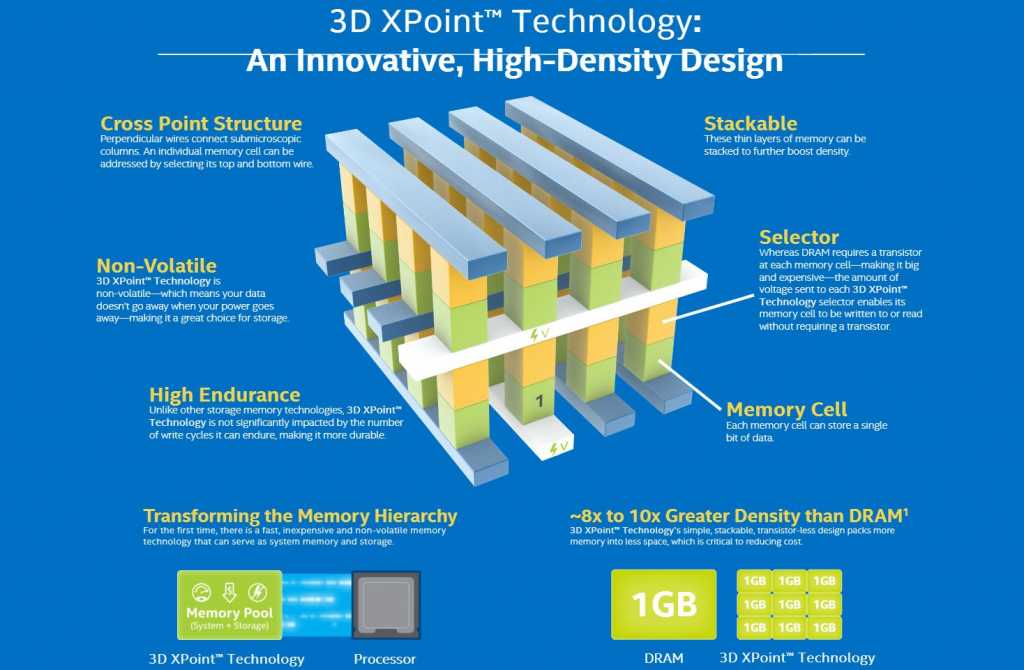 Beyond the fascinating and groundbreaking technology that lies beneath the surface, the punch line is that the first 3D Xpoint memories are not found in the laboratory at a single prototype level, but in mass production preparations with an impressive 128 gigabit storage capacity per chip - and should be available as early as next year.

Intel and Micron unveiled a Xpoint chip wafer that creates 20 nanometer lithographs at a joint plant of the two companies in Utah, USA, with 128 GB of storage per chip allowing them to be competitive and equivalent to the chips.NAND Familiar to us, already in their first generation - and hence, naturally, the volumes and compactness of the chips3D Xpoint Will only grow. It's a little hard to believe this whole thing that popped up out of nowhere, but as mentioned - when two of the most significant chip makers on the market say something so bombastic, chances are it's not just an empty buzz.

We will continue to follow with interest one of the most intriguing announcements in the hardware world recently, and we will update you accordingly of course.