On turbo and speed, performance tests

With the launch of 11th generation processors, and the introduction of new processor architecture, she decided Intel Take the opportunity to insert a few more tools Overclocking Interesting for its labs. These are not tools from two world orders, but mainly for toys for tweakers and people who like to test hardware in special performance tests and special ways. 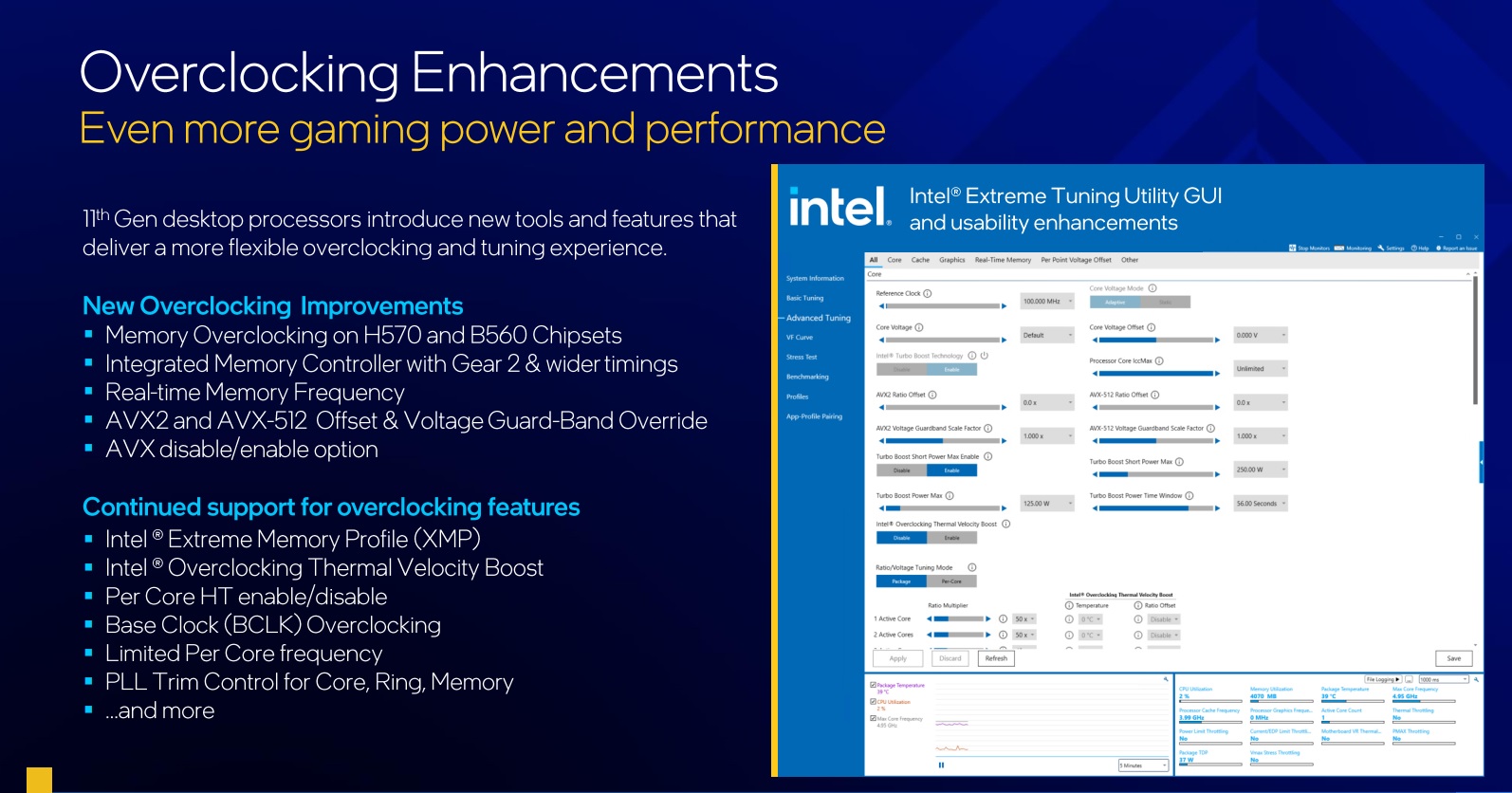 There are two important things that have changed in the Core series in the 11th generation of Intel. The first is that memory overclocking can be performed with the H570 and B560 motherboards and not just with the Z590, as noted. The second thing is that the memory controller works with a new two-speed system. Those who are familiar with the method by which the Infinity Fabric interface with processors AMD, This is a very similar method. There is a first gear and a second gear (which in logic here is actually slower) between the memory frequency class and the memory controller itself. Optimally, a user will always want to work with first gear. By default, the second gear is the one that selects a system with זיכרון At a speed of 3200MHz or more. It is important to pay attention to these things (just allow a 1: 1 situation in the BIOS, details below). 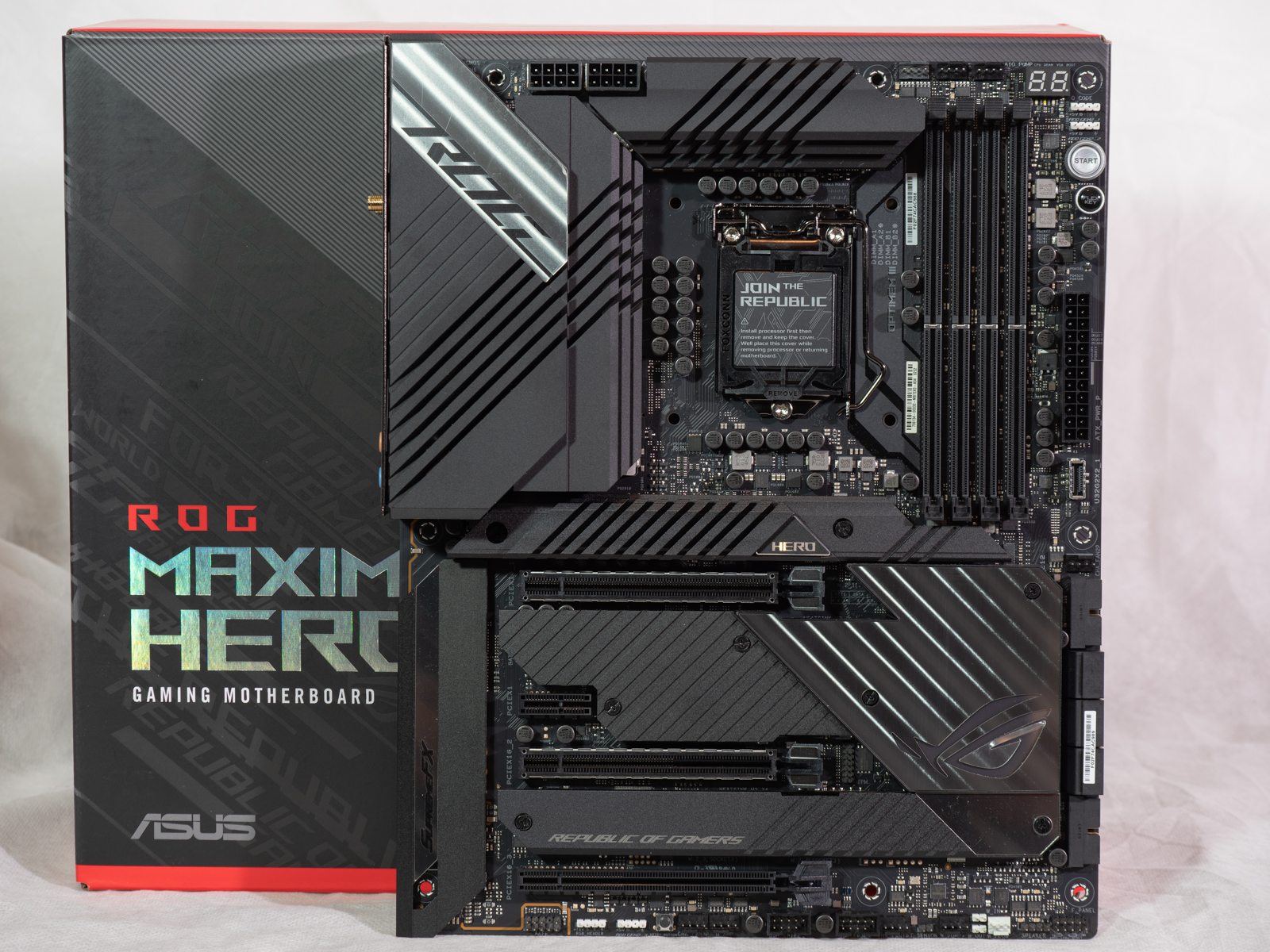 A new chipset means there is a fresh opportunity for various motherboard manufacturers to launch a new generation of boards. At the top of the list is of course the veteran Asus with its ROG products. The Asus Maximus XIII Hero is Motherboard Extremely advanced with everything you could ask for in an advanced processor.

This motherboard serves as the basis for the 11th generation processor exams Intel For us, and we would like to thank Intel and Asus for providing it to the site system. Honestly, this is perhaps the most complete product in the category of motherboards we have encountered for platforms Intel To this day. A luxury product without a doubt. 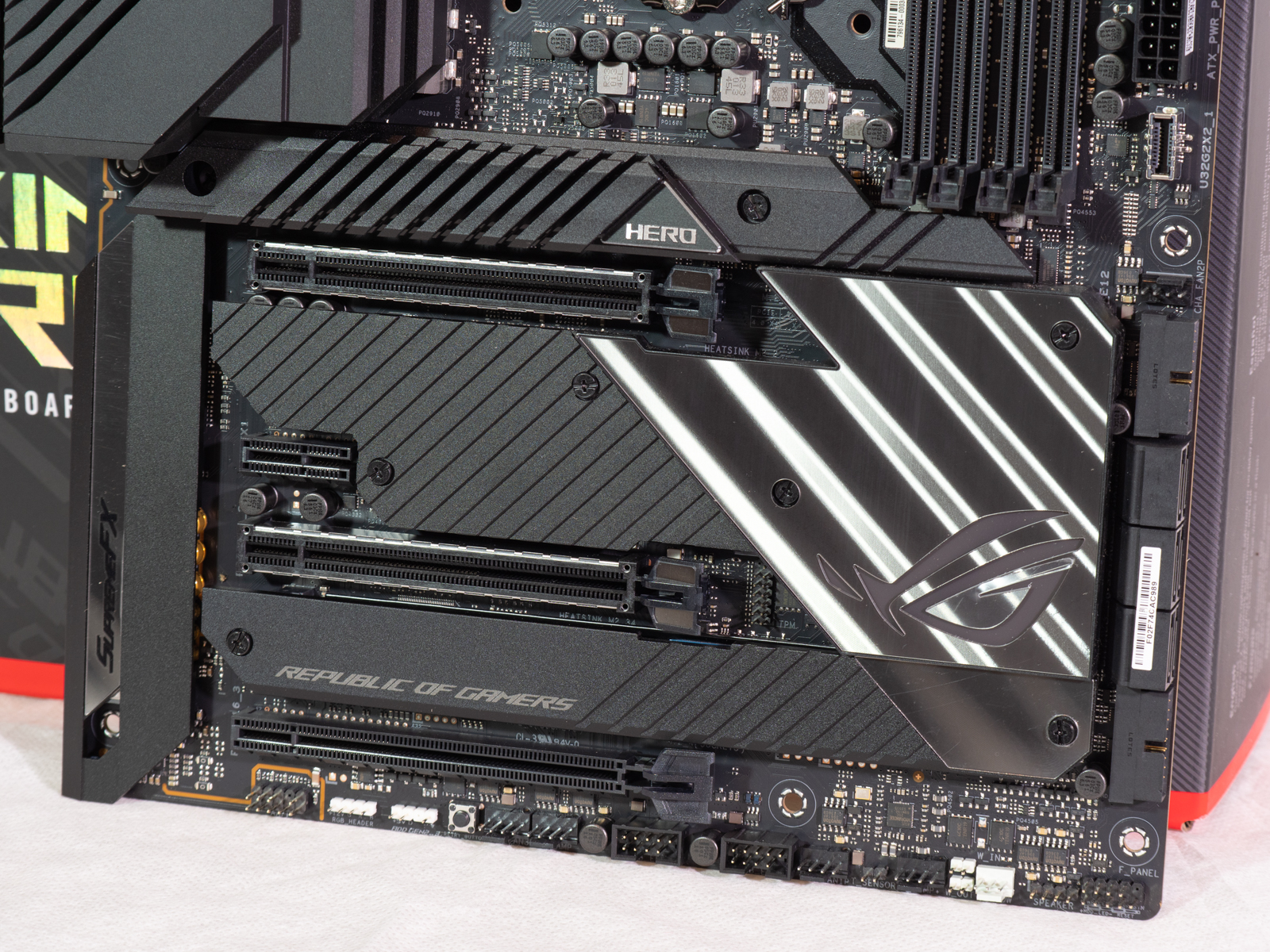 This motherboard illustrates some of the design changes made as a result of adding the M.2 interface for storage and includes for the first time four usable interfaces on the board (the top is connected to 11th generation processors).

Intel has a new technology called Adaptive Boost Technology. This is in addition to the various boost technologies for accelerating working frequencies when the heat envelope allows it. The principle in ABT is that as long as the working temperature allows it, the CPU cores can work at higher frequencies over standard boost technology. The only processors that support this technology are the Core i9 11900K and the Core i9 11900KF. Believe it or not, this is the biggest difference between the Core i9 and the Core i7 in the 11th generation of Intel, Since both have the same amount of cores and even extremely close working frequencies.

Core i7 11700K Core Processor Intel Receives its own unique review which will be published one day after this review - worth staying updated! 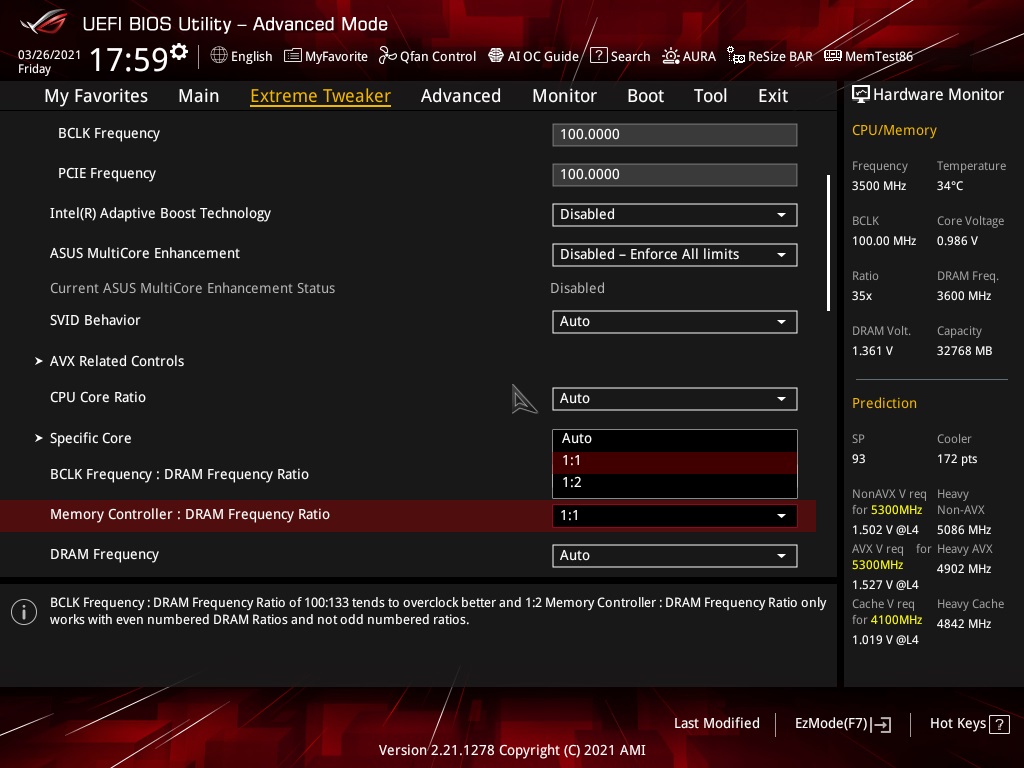 We decided to take the CPU exams when the ratio between the memory controller and the memory speed is 1: 1 (gear 1). There are two options that can be selected in the motherboard BIOS in favor of performance acceleration. One is Multicore Enhancement which overrides the official heat and frequency envelope settings of Intel And the other is ABT technology. The first is overclocking for all intents and purposes, and the second is overclocking according to a certain definition of Intel. Updated motherboard for BIOS version 0610, important to note.

We tested the Core i9 11900K in two modes - the first is when these two options are on, and the second is when both are off. This is to see how the processor handles only its official working frequencies. The Core i5 11600K will be tested with Multicore Enhancement turned off like the rest of the processors Intel That we have examined so far.

Processor AMD They too were tested with default settings in the BIOS and with a 1: 1 ratio between the memory controller and the memory itself. Also on the side of AMD We have not activated acceleration technologies beyond the official frequencies of AMD (Meaning Precision Boost Overclocking was not enabled).

Unlike reviews Processors Others across the web, we chose to paint a slightly more realistic picture of the capabilities of the various processors when games were tested not only at 1920X1080 resolution but also 2560X1440 and 3840X2160. We did this to see what happens when some of the system load goes down from the CPU and goes to the video card as the focus. As well, we believe my body Cooling Massive and systems Cooling Exotic water is a nice thing in advanced systems, we do not stick to advanced air cooling for all our processors as a larger user share representation is a matter of importance, CPU performance with Cooling Air is something we are interested in results over processor performance with Cooling water. 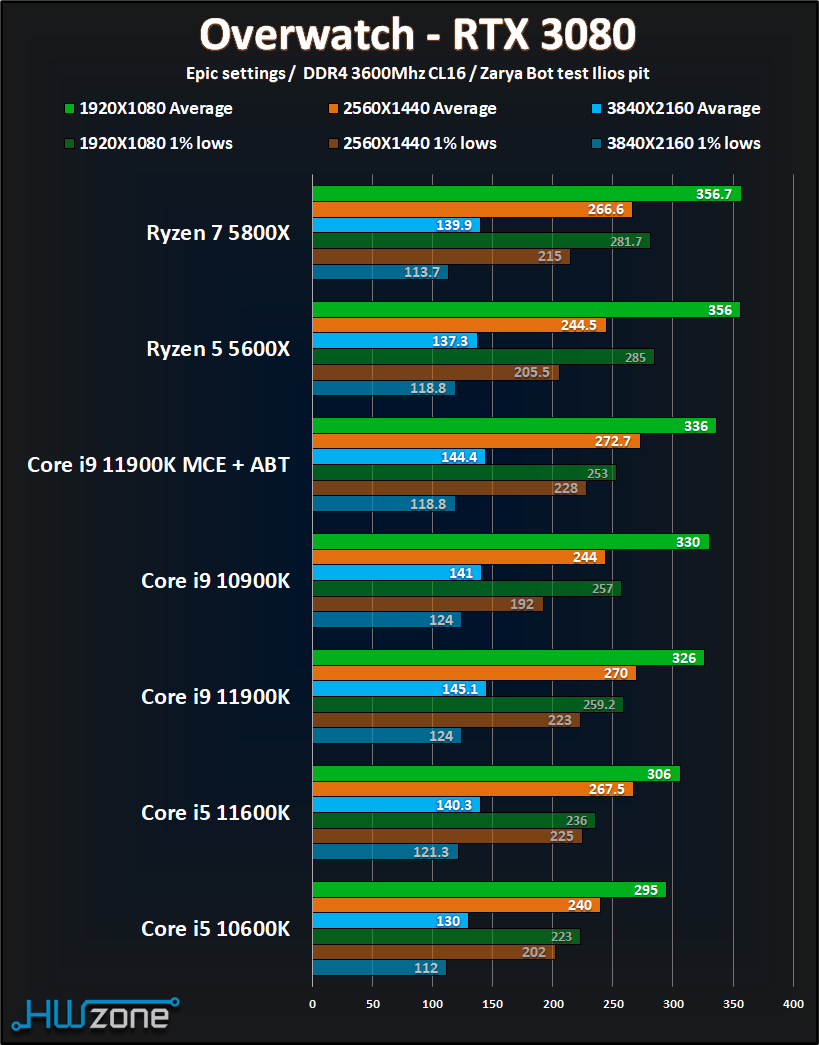 In Blizzard's Overwatch game, we see that the ability to produce more frames per second on average under 1080P remains in the hands of AMD. When switching to 1440P resolution (orange) and placing more load on a video card, these are Intel processors that take the lead followed by processors AMD In the 5000 series and then processors Intel In the tenth generation. Leading gaming performance remains with 11 Series processors Intel Also in 3840 X2160. 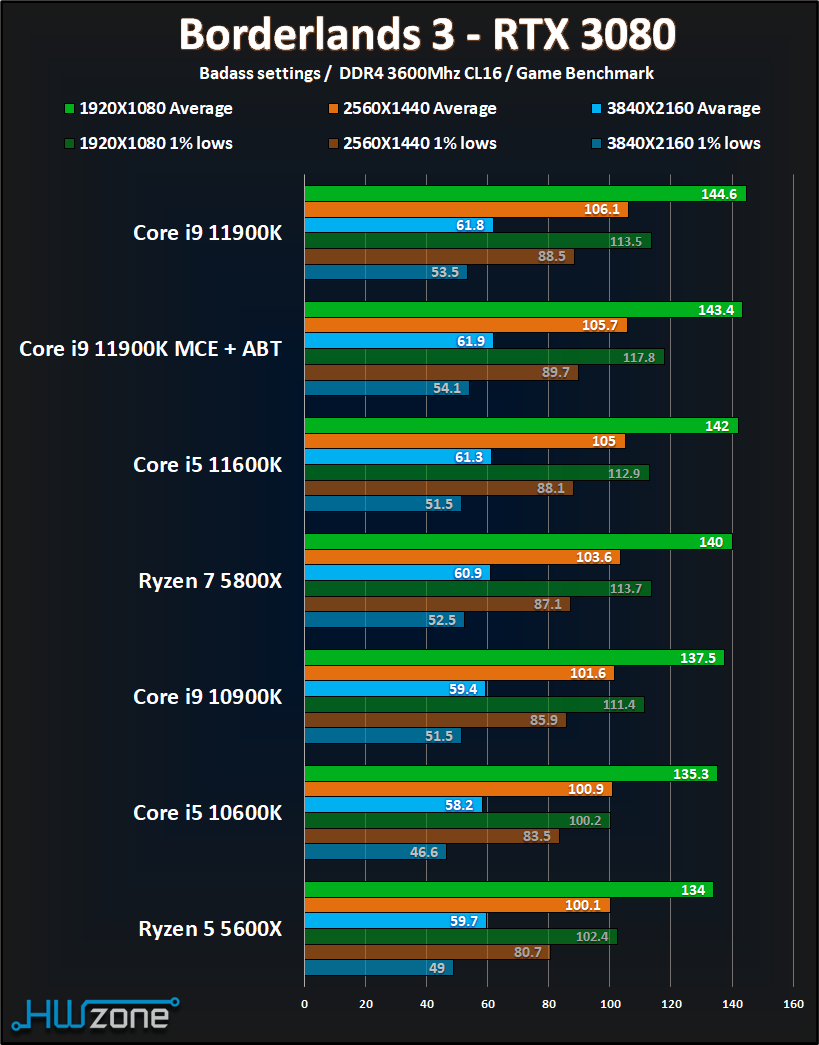 In the Borderlands 3 game you can see the lead of the new Rocket Lake S processors in performance across the variety of resolutions tested. The differences are quite minor, as this is a relatively heavy game even at the modest 1080P resolution. An interesting phenomenon we encounter is that without any intervention on the part of the motherboard and without the new boost technology, we have seen healthier performance thanCore i9 11900K. 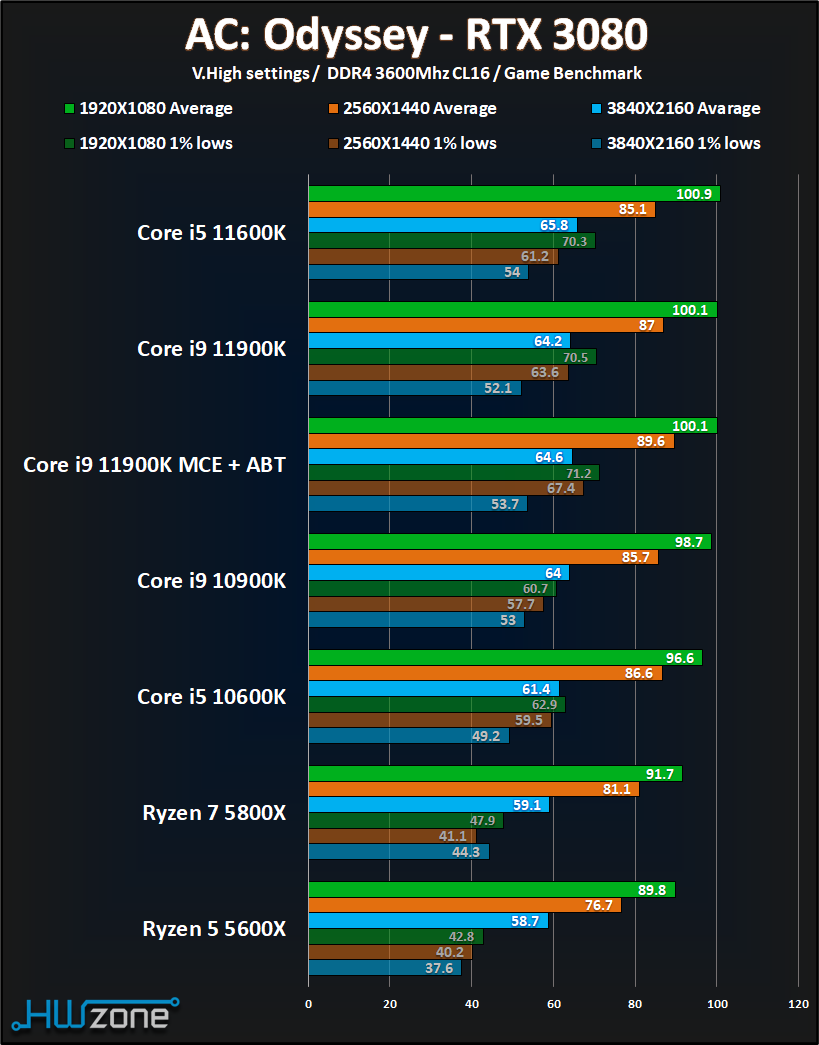 The effort to crown the gaming performance is a serious effort. You know that when the graphs start to look almost completely flat from end to end. To be politically correct, in Assassin's Creed Odyssey the fastest processors are those from the Rocket Lake S. Series. Even at 3840X2160 resolution we see a pretty convincing 11600K lead over its direct competitor,RYZEN 5 5600X. 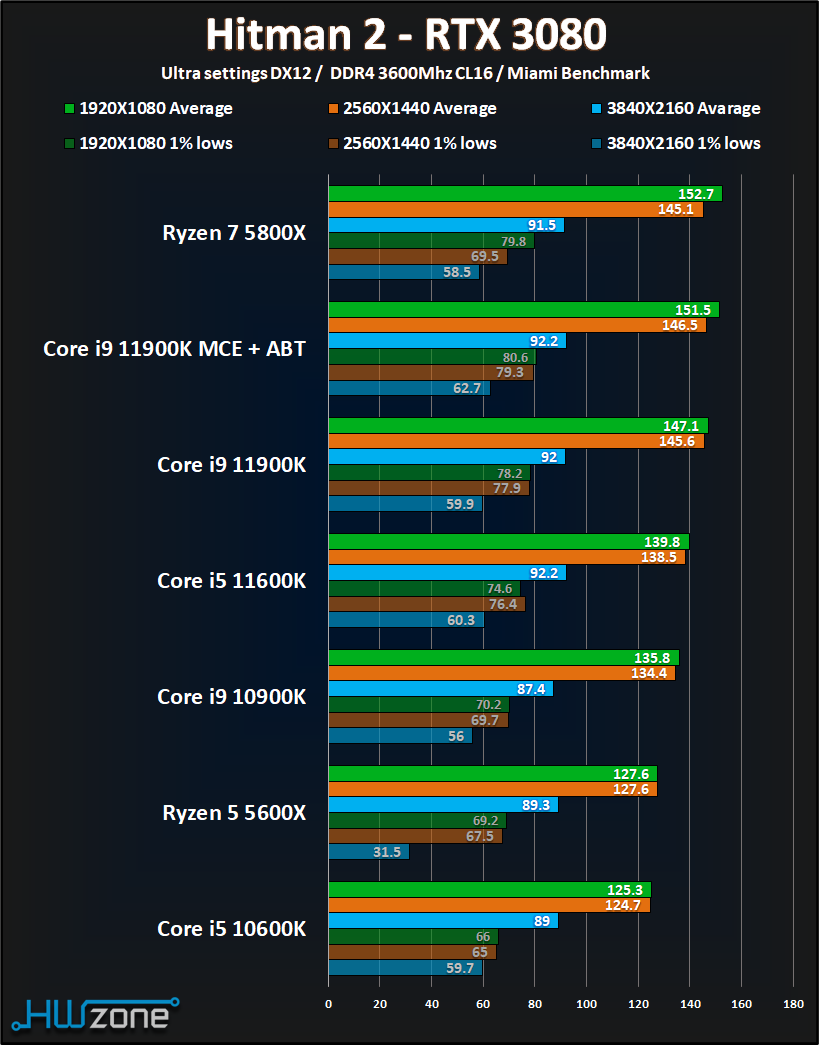 Those who are hungry except for a bottleneck could find it here. Using the rugged RTX 3080, you can see that we collide with the neck of a processor bottle even at 2560X1440 resolution at maximum settings in this title. In this title the crown of performance in the two lower resolutions remains in the red camp. Admittedly, when we moved to the 3840X2160 resolution we see that my processors Intel Leading very little. Of course it is hard to see a significant difference between 92.2FPS and 91.5FPS. 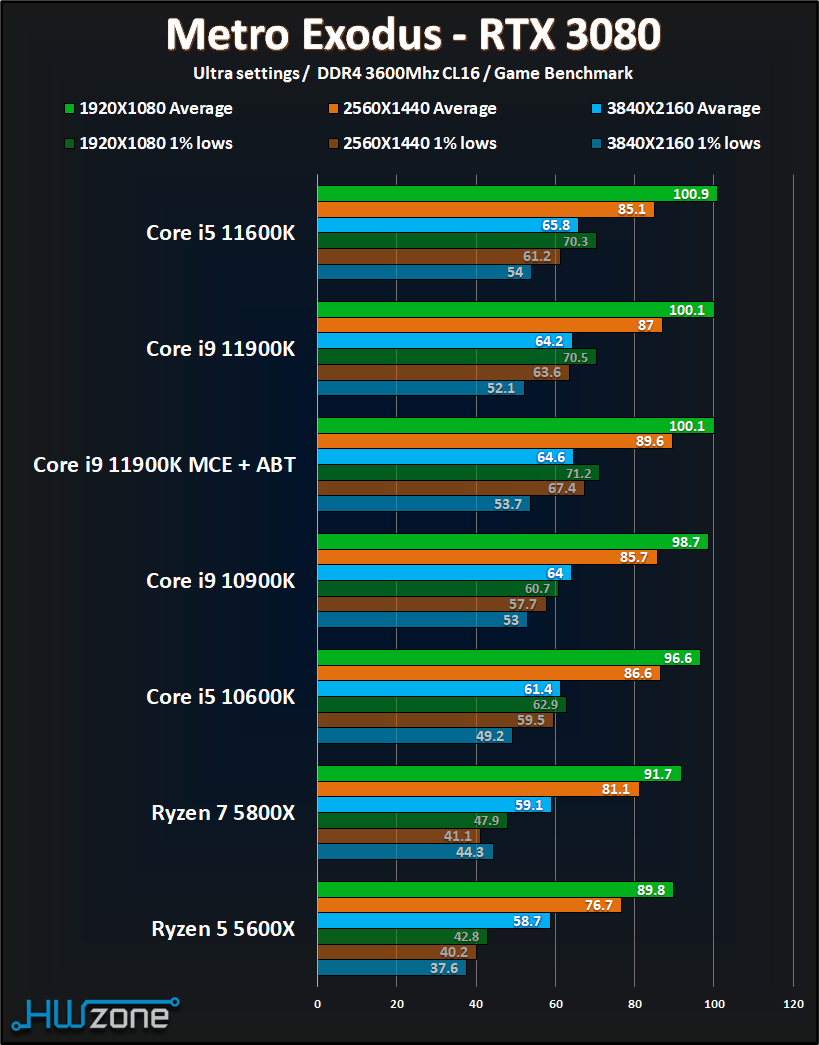 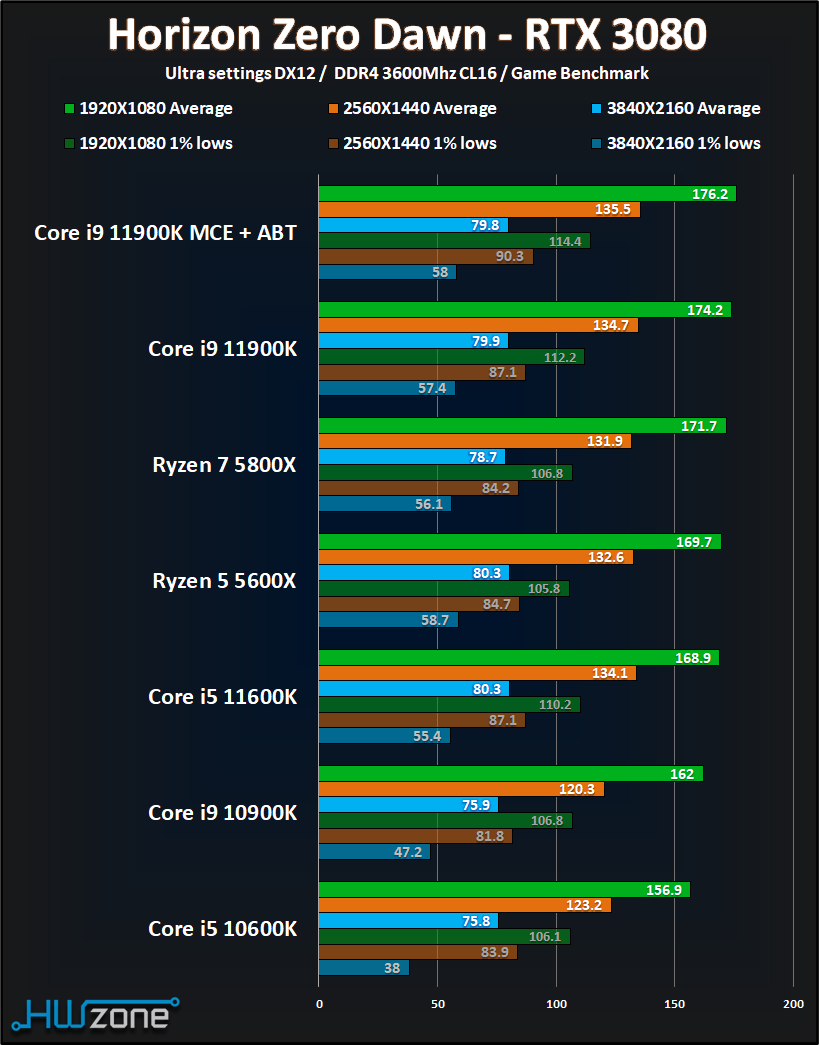 In the game Horizon Zero Dawn, which by the way is quite intense on processors, you can see that there is a close battle between processors AMD And processors Intel Modern. The lead belongs to the Core i9 11900K on both its modes, with RYZEN processors tucked behind. Technically, the Core i5 11600K is just as fast as them. 10th generation of Intel Slightly shows the age of the previous architecture. 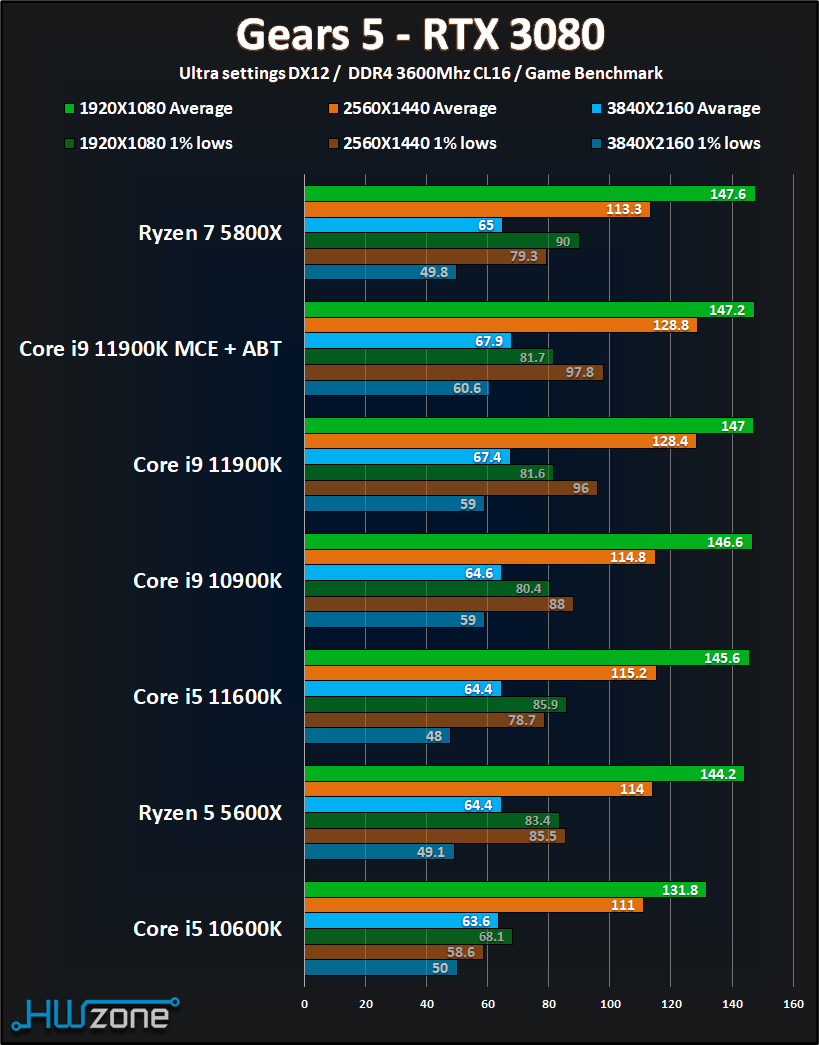 The game Gears 5 shows a state of light bottleneck at 1080P when things change significantly at 1440P with a significant lead of processors Rocket lake S, specifically 11900K. What surprised us was that at 3840X2160 resolution we expected to see flat blue graphs, albeit processors Rocket lake S or specifically 11900K gets significantly higher performance at this resolution on average despite the full bottleneck of the video card. 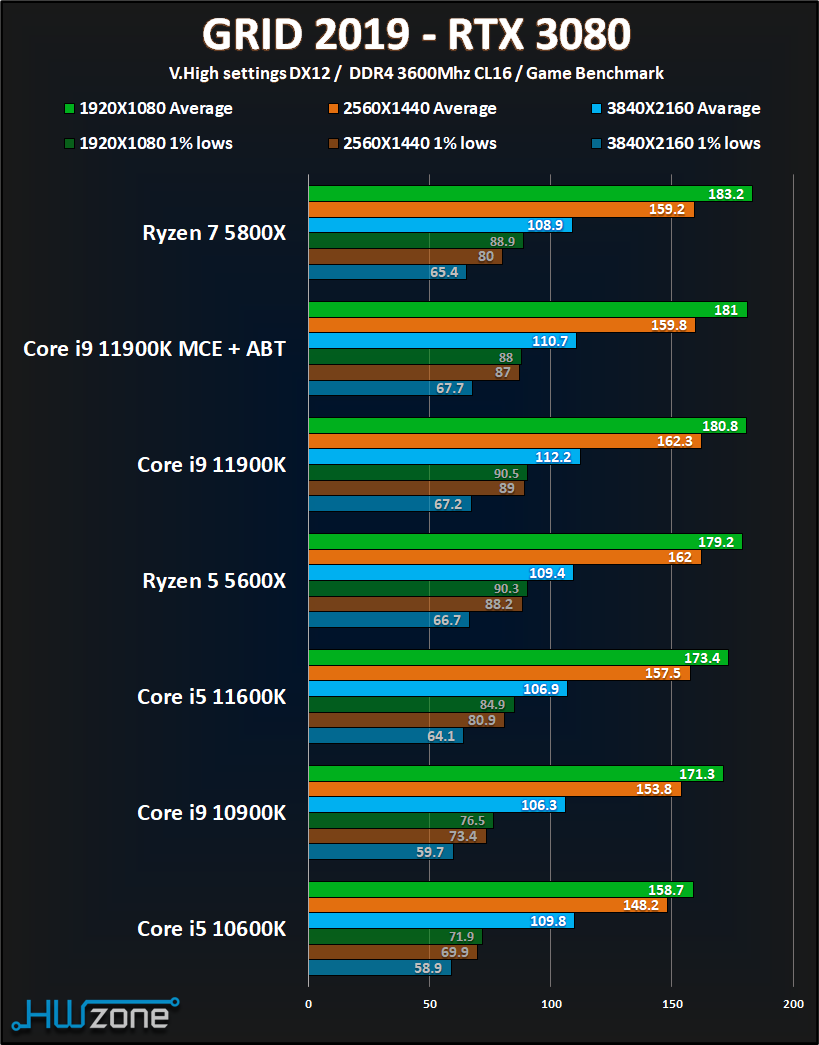 The GRID 2019 game is proving to be particularly effective with Processors And makes very respectable use of the video card even with 1080P resolution. In this title the processor that managed to push the highest amount of frames per second was RYZEN 7 5800X among the processors tested. In practice, processors Rocket lake Very close and even leading as the resolution goes up. 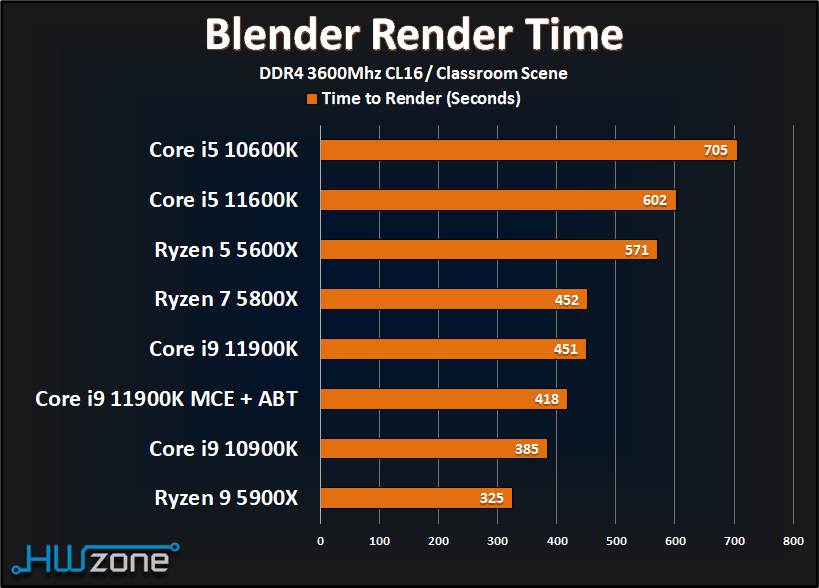 We also decided to test the Blender rendering test, which included a result of a 12-core processor that competes with the same price tag of the 11900K, the Ryzen 9 5900X (review it soon). Intel Knows what she's doing when she markets 11th generation gaming processors first and foremost. When a competitor has more processing cores that are capable of performing operations like rendering on a lead scale of tens of percent, gaming seems like the right focus. Thanks to its 10 cores, this task is fastCore i9 10900K fromCore i9 11900K. Admittedly, the difference is relatively small. Note that Ryzen 5 5600X is at least correct for the latest blender version for writing these lines, faster rendering than Core i5 11600K. 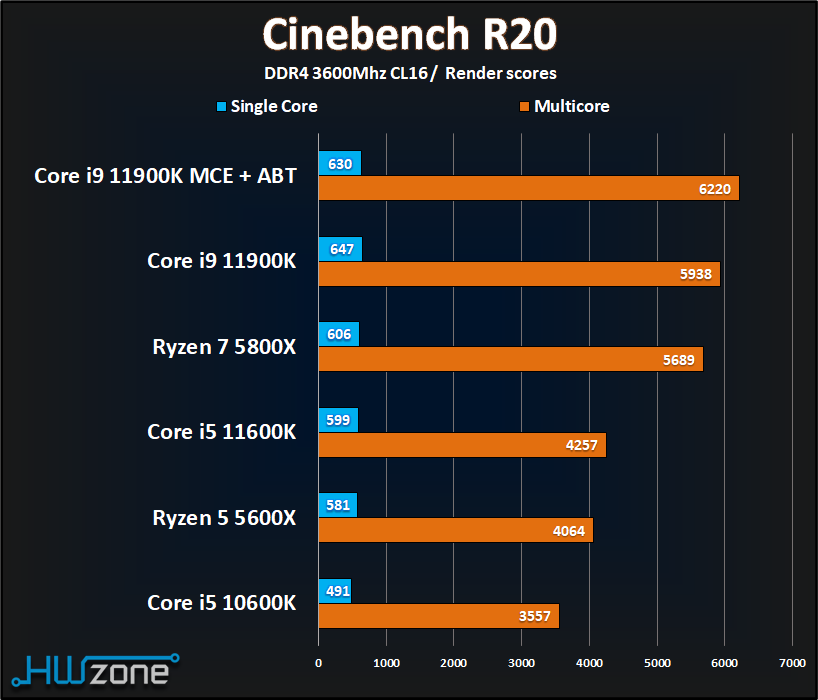 In the Cinebench R20 rendering test, it can be seen that multi-core performance inCore The i9 11900K is significantly improved when the motherboard overclocking functions are activated. We also saw a decline in the performance of the single core that surprised us in this situation. Explains a bit about the performance throughout our gaming exams. In this rendering test, it bypasses Core i5 11600K the RYZEN 5 5600X. A processor is missing here RYZEN 9 5900X that will smash the rest of the results with a monstrous multi-core score.