More details about its plans for the next year: Skylake Will take over all the product offerings by the end of the year,Extreme Next will come in the first three months of 2016

The fact that Intel has officially announced a (further) postponement of the move to a 10-nanometer manufacturing process does not mean that the company plans to rest - if you believe its updated slides released online now, in the next 12 months we will see the entire home product line updated and upgraded. And that includes the extreme processors that almost every performance addict strives for.

The seemingly updated roadmaps confirm what we already knew - processors Skylake The first will arrive in the third quarter of 2015, starting with the 5 for August, as we have already reported. 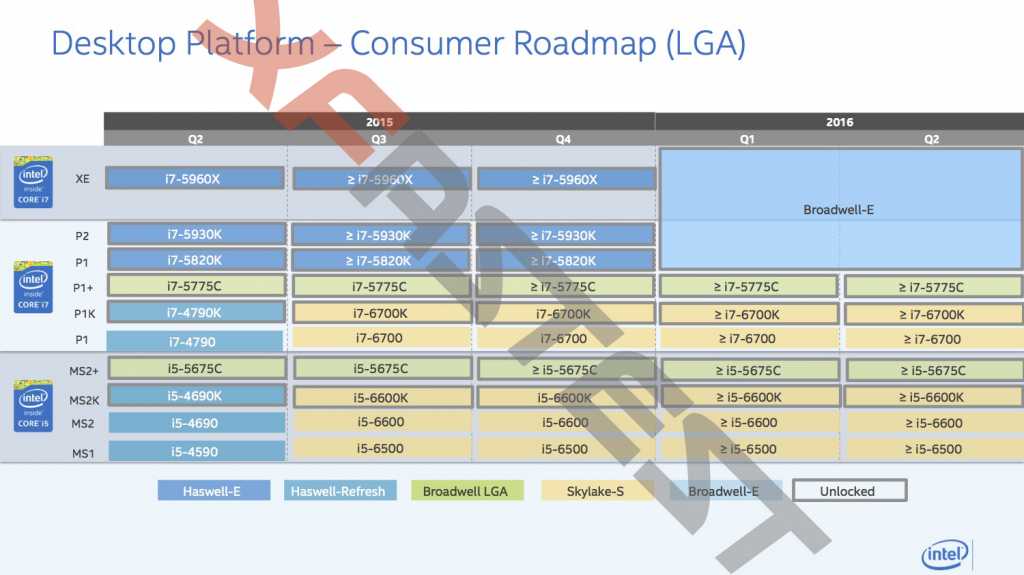 All modelsCore i7 andCore i5, known to us from information disclosed earlier, will be launched in August and September,Core i3, Pentium and Celeron will arrive in October-December 2015. The division between theCore i5 andCore i7 for theCore i3 and everything under it continues to be very clear and absolute, it seems, so anyone who expected to see a processor Core Cheap i3 with four physical processing cores - will probably have to keep waiting until 2017 as a minimum. 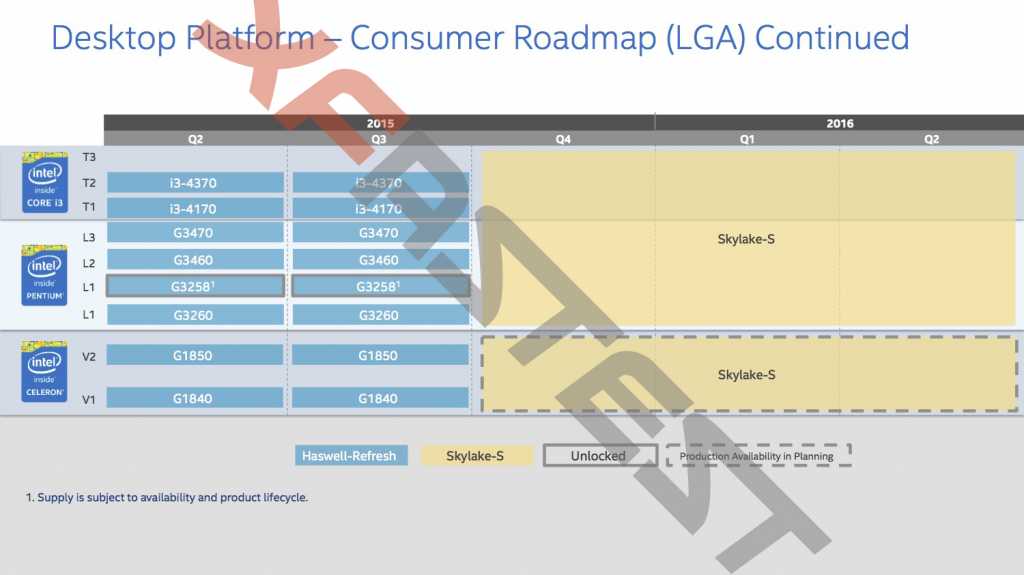 Another noteworthy fact is that the pair of single Broadwell desktop processors launched about a month and a half ago will indeed be the only representatives of the fifth generation of Core LGAs, and will continue to be marketed alongside Skylake processors - ostensibly as a more "complete" solution , Which will allow consumers to get high overall processing performance and 'good enough' graphics processing performance (if not aimed at gaming at super resolutions), in one package and without extra for a discrete video card. Think of it as a 'premium' alternative to APU's APU series AMD, Who have been insisting for years that they provide a solution that meets most of the requirements without the need for an additional video card.

Now, let's move on to Cherry - the next generation of chipmasters from the chip giant, the Broadwell-E generation. The new generation is expected to reach us in the first three months of next year, with a new 14-nanometer lithograph (for the first time in Extreme family processors) and general characteristics similar to those of the next generation.Haswell-E present: models with 6 and 8 processing cores under the K models (open product with limited final level) and X (unlimited open product), up to 20 megabytes of memory Third level cache, up to 40 channels PCI-Express 3.0 between the processor and the motherboard, DMI 2.0 connectivity at speeds of up to 20 GB per second between the processor and the chipset, as well as a 140-watt thermal envelope.

In fact, even the bracket and chipset of the Broadwell-E generation will be the LGA 2011-v.3 and the X99 respectively, as in the current generation - although Intel takes care to note that the processorsHaswellE will not be supported for some reason by the latest motherboards that will be launched alongside the E-BroadwellE, thus strengthening the feeling that the company is marching to a situation where upgrading the processor will always lead to an upgrade of the motherboard, without the ability to influence or control the consumer.

As it seems at the moment, the most significant improvement for the Broadwell-E generation will be built-in memory support DDR4 Faster at 2,400MHz, compared to 2,133MHz in the current Extreme generation. It can also be guessed that the new generation will offer upgraded clock frequencies that will help a moderate improvement in overall performance - given that the processorsBroadwellE will offer the same TDP envelope, but based on improved lithography.

All of this information comes to us right next to the information about our programs AMD For 2016, which sounds interesting and even as promising as the Intel And we have no choice but to wish great success to both sides, and hope for a renewed renaissance in terms of performance and capabilities in the desktop computing market.