Reports on the third quarter of video cards are already here, with modest positive news for the red actress

As happens every three months, even now we get A modest general report JPR analytics author on the state of the discrete video card world - and the good news is thatAMD Is able to regain some of the market share it lost, but what is a little less positive is that the market is becoming smaller and smaller.

According to the current report, in the third quarter of the year 2015 sold a total of about 12 1 million dedicated video cards - most of them from NVIDIA and AMD. This is a nice increase of 27.6 percent compared to the number sold in the second quarter of 2015, which is good - but in the same breath it is worth noting that it is still a decrease of 3.8 percent compared to the number sold in the third quarter of 2014, so the trend Continues to be A contraction of the total number of consumers who choose to integrate a separate graphics processing card into their system, along with a moderate growth in the number of people who prefer to be content with the built-in core provided by Intel andAMD. 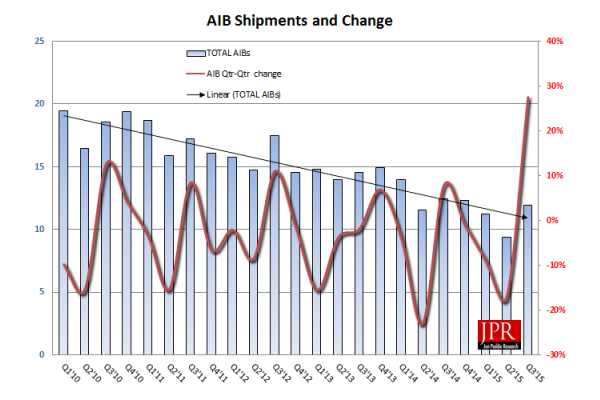 Growth compared to the previous quarter and the decline compared to the previous year were both better than the general PC market data (which grew only 7.6 percent quarter-on-quarter, and fell 8.9 percent compared to the same quarter last year), which nevertheless indicates a positive momentum To video card manufacturers and gaming on PCs in general - but at a glance it could be argued that as long as the personal computing world continues to lose its scope, everyone who depends on it (including NVIDIA and-AMD, Of course) loses in the end.

Another data point specifically concerns AMD, which enjoyed 33.3 percent growth in the third quarter of 2015 compared to the second quarter of the year, compared with growth of only 26.4 percent "NVIDIA" - which allowed AMD to increase its market share Minimize to 18.8 percent (vs. 18 only) at the opponent's expense, which of course Continues to control the high hand And sells, statistically, four products on each product sold by AMD. This improvement from the chip developer from Sunnyvale is not much, but hey - it's better to see further deterioration of theRadeon And so on, is not it?