The veteran hardware manufacturer, MSI, wants to demonstrate progress, and with the launch of the new and revolutionary Core 9 series Intel Has also been given the opportunity to launch a motherboard compatible with the nature of the new processors,core i9 9900K, which requires a stable and highly efficient power supply system.

That's how she got it MSI Also an opportunity to rebrand its motherboards, as well as a completely new design that should put Z370 in a technological disadvantage with the chipset Z390 Which is currently the flagship of LGA1151.

So far launched MSI No less than 11 motherboards based on the chipset Z390. The cost of motherboards is expensive and cheap at the time of writing these lines appears below.

The terms MEG, MPG and MAG are new in the world of branding MSI And come to mark three different engineering grades and so prices accordingly. Today theZ390 GODLIKE is the most prestigious motherboard - at a price tag of about NIS 2,750. 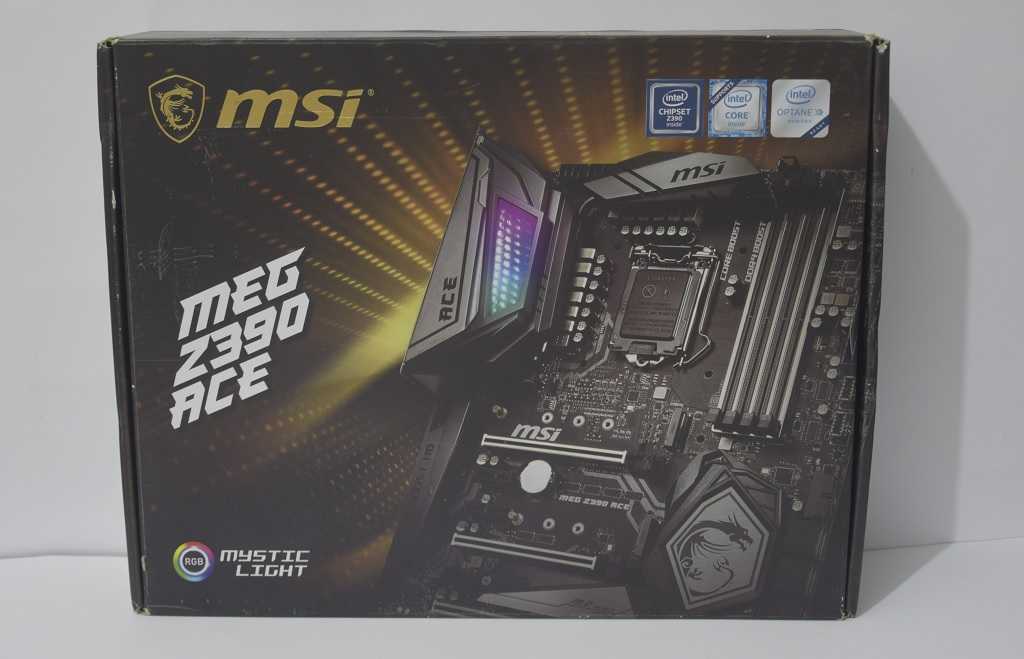 The motherboard in this review is the MEG Z390 ACE, which is a subset of the Z390 flagship. The price of this motherboard is NIS 1,500, which is almost half the amount of the model above it. However, this is a fairly advanced motherboard that is suitable for expensive systems, including those with core i9 9900K and graphics cards such as GTX or 1080 Ti RTX 2080 and their like. 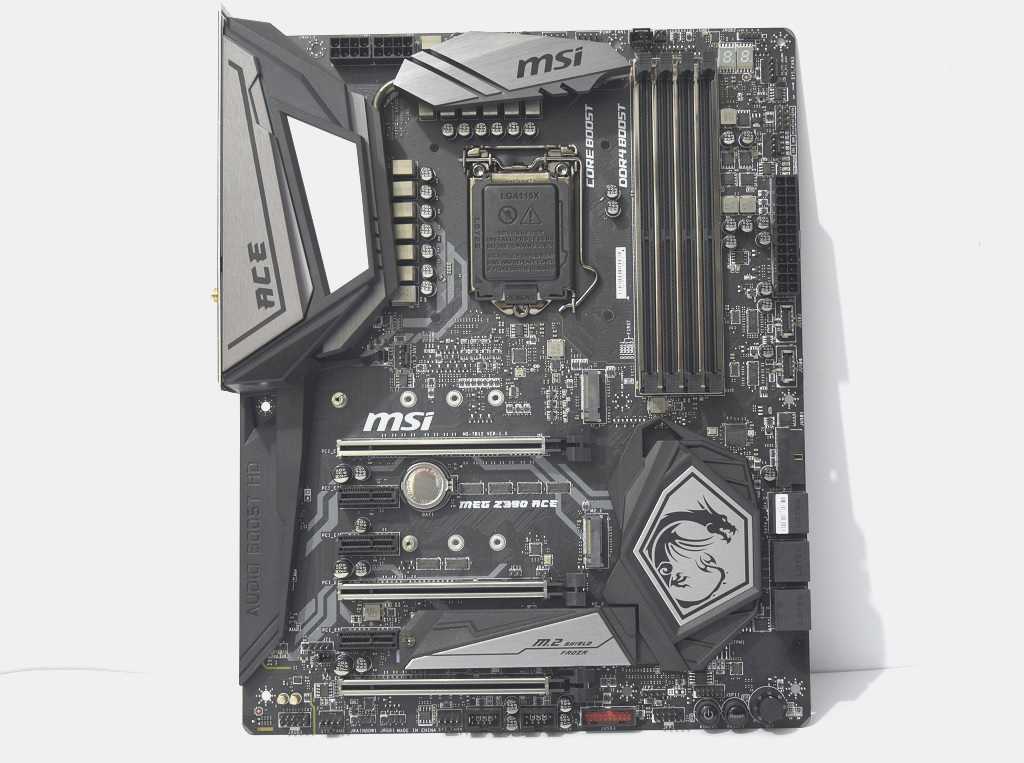 Motherboard MEG Z390 ACE is standard ATX standard. This means it will fit most gaming cases today. All you have to do is make sure of the manufacturer's page support. 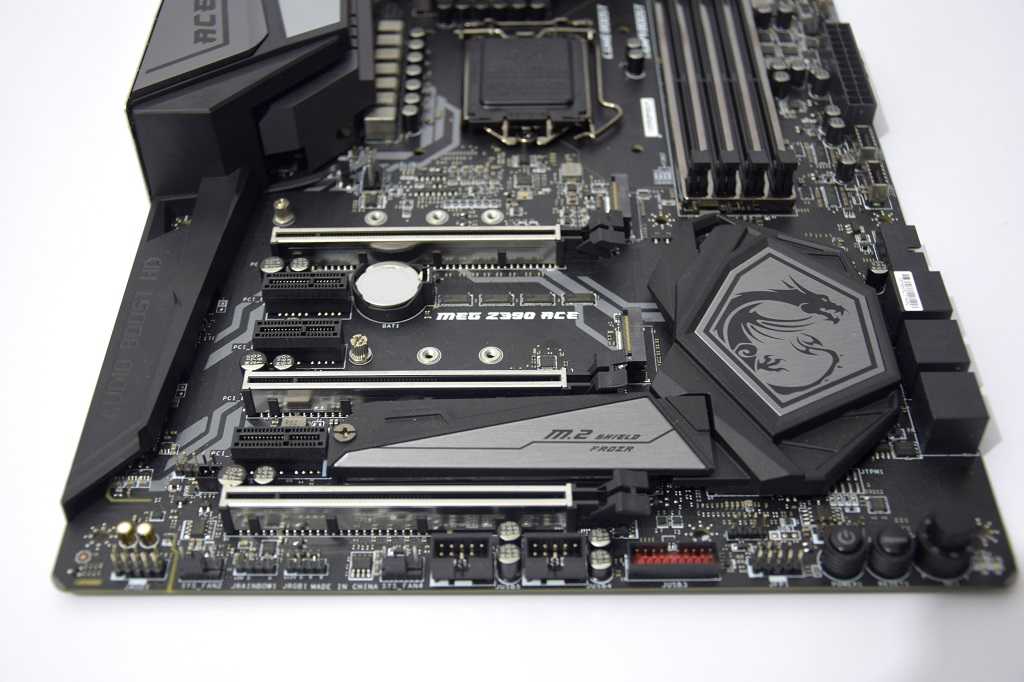 At MSI, this motherboard has advanced handling for PCI Express and M.2 interfaces for expansion and storage cards. The 2 board has M.2 interfaces when one comes with a lid made of aluminum for cooling. There are three full-length PCI Express interfaces when configurations SLI And CrossFireX are enabled, for a few of you who are still interested in a multi-core graphics array or simply need a computer for purposes like Deep Learning.

Of course, the lower interface is limited to only X4, and this traffic comes from the chipset, not from the processor. However, this interface is suitable for many means.

The 6 motherboard has SATA3 interfaces, some of which will be disconnected if more than one M.2 interface is used. RAID types 0, 1, 5 and 10 are fully supported.

The rear port array of theZ390 ACE is definitely respected and includes:

Places for improvement will be mainly in the network. I think that in such a price tag and in accordance with the trend that is beginning to gain momentum, a network controller between 2.5Gbps and 10Gbps will add a lot to the motherboard, especially to the existing controller. I've heard from users searching first Motherboard Which can connect to a local fast server.

In the "USB There are no complaints at all. The possibility of burning bios is constitutive USB Manually it is great and allows updating the system without manually entering and performing the entire process. All you need is for the parent file to be available in the parent folder of that connected drive. 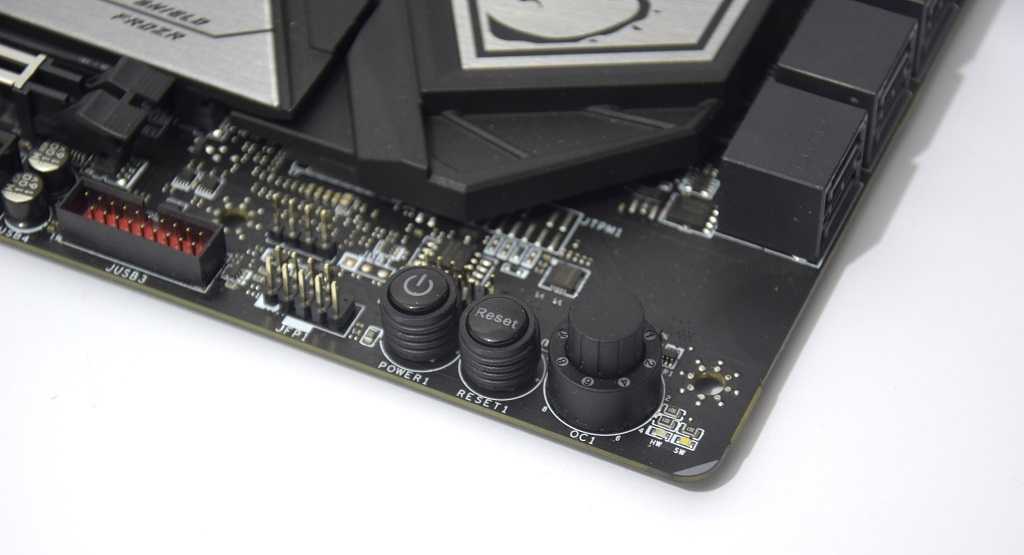 If we are dealing with Overclocking, it is important to note these buttons on the motherboard. Reboot next to turning on and off. A third button is particularly interesting, allowing real-time adjustment of different profiles that are set in BIOS. This can be a relief for those who want to break records The fast In real time or even during a test. 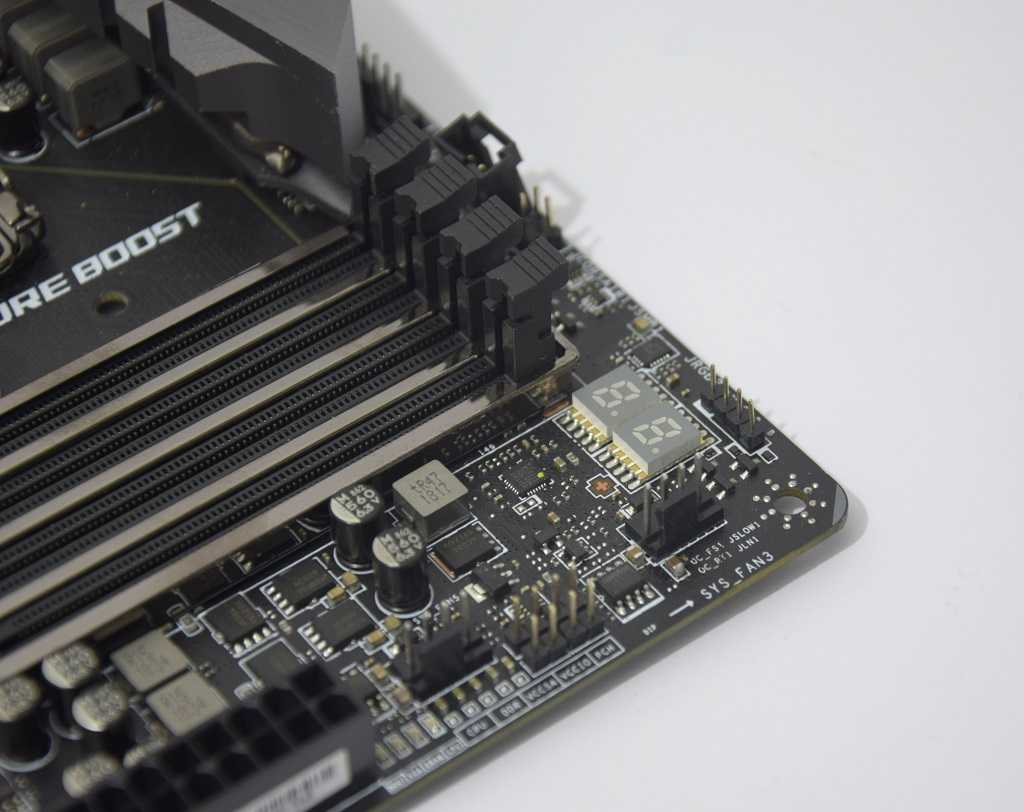 At the top of the board next to the memories is a small LCD side that shows a sequence of actions when the computer is rebooted. This monitor then displays real-time CPU temperatures. This is not a bad bet at all, adding to the functionality of such a component. Not far from it are also different contact points which allow to know in real time data such as core voltage or זיכרון Using a multimeter. 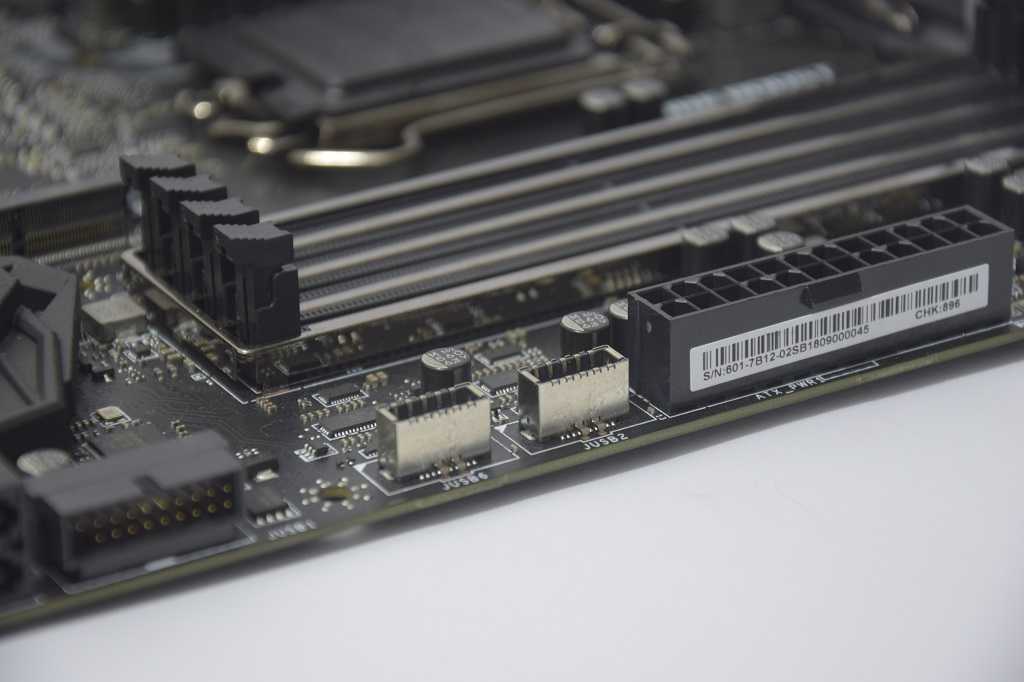 Looking at the side of the motherboard, you can see a more respectable, future-saving addition from the MSI, which is the addition of a USB 3.1 Gen2 front port to the chassis. Already in 2019 is expected to come out quantity Enclosures Which includes such advanced ports, especially the type-C connection type.

The RAM memories that are supported on this motherboard are of course kind DDR4. B-MSI Its name is a steel chassis around all memory slots to keep the connection from physical damage. MSI Claims to support memory at 4500Mhz speed but of course depends specifically on the quality of the processor. The motherboard did not have any problem running with our 3600Mhz memory set. 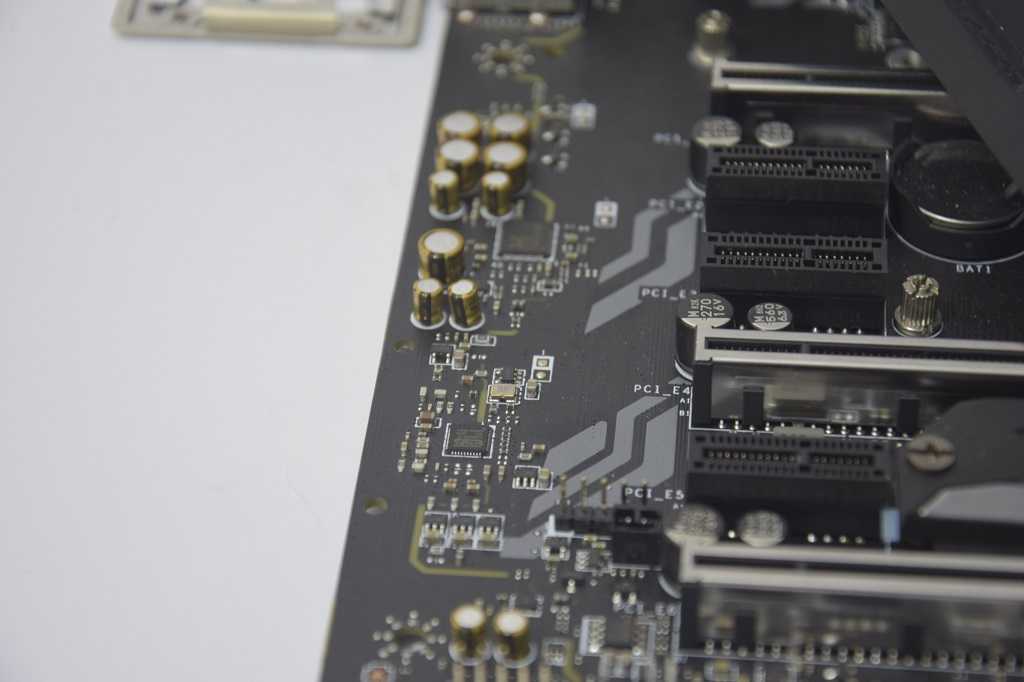 The sound card in this motherboard is based on Realtek's ALC1220 audio processor which has become quite banal. There is nothing unusual about the surrounding signs. There is a small ESS amplifier and some Japanese capacitors. I would be very happy to see in the future a manufacturer or two who are a little more daring than this design. He certainly does the job, but has enough space on the board to also think of more advanced solutions. 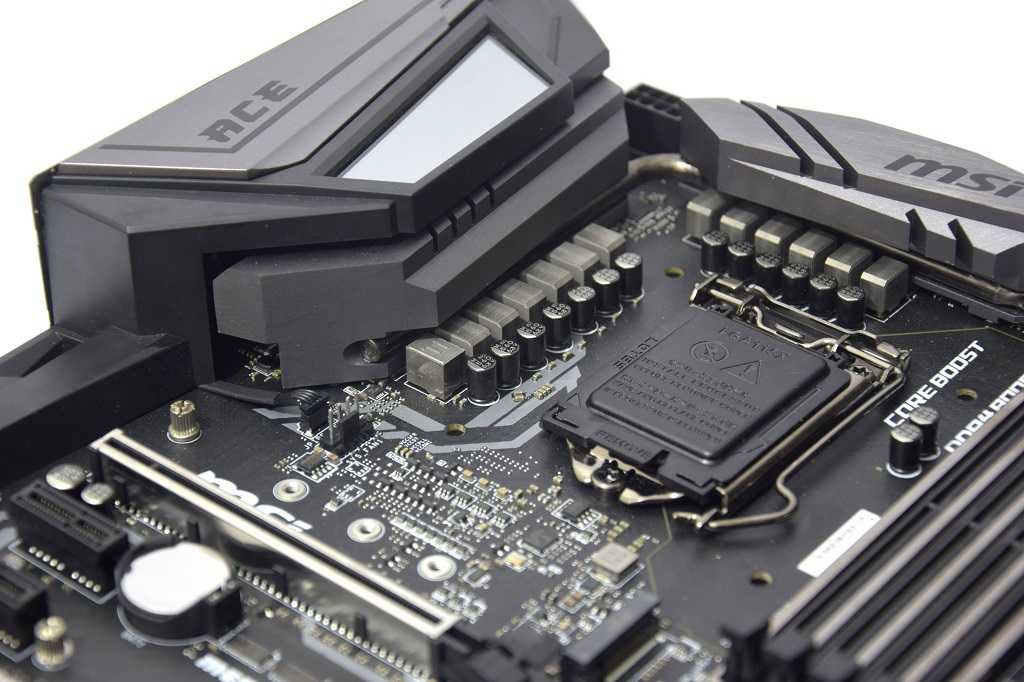 The most interesting part of the overclocking in this motherboard is a stabilizing system and the power supply to the processor. In this motherboard selected MSI Use an array that has become familiar among the advanced motherboards of Z390 And was considered only in the previous generation for the level of flagship ships. 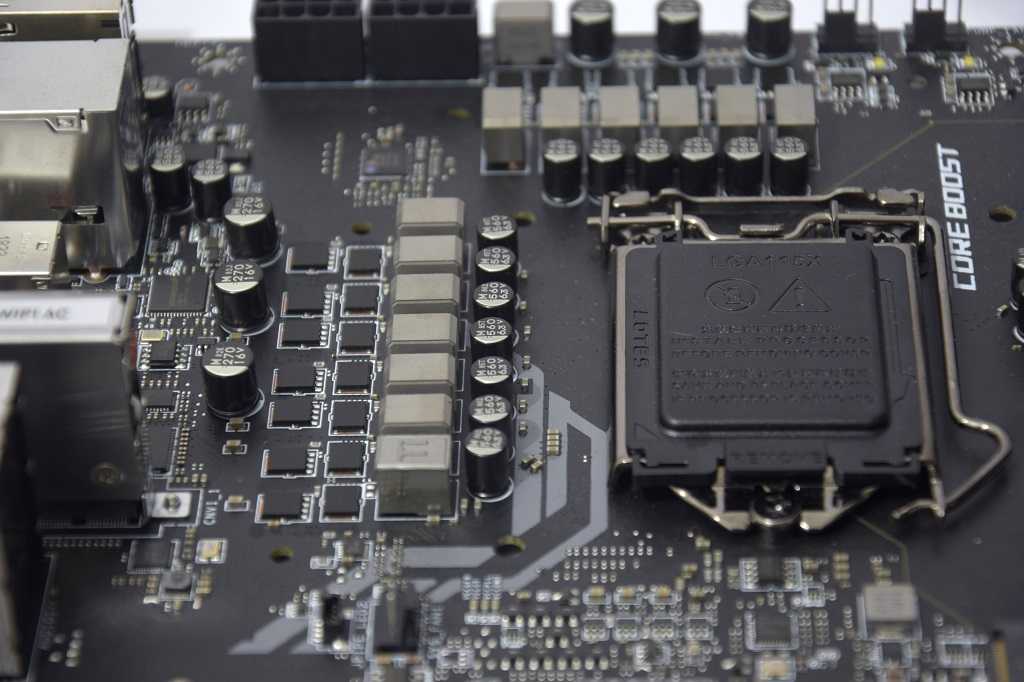 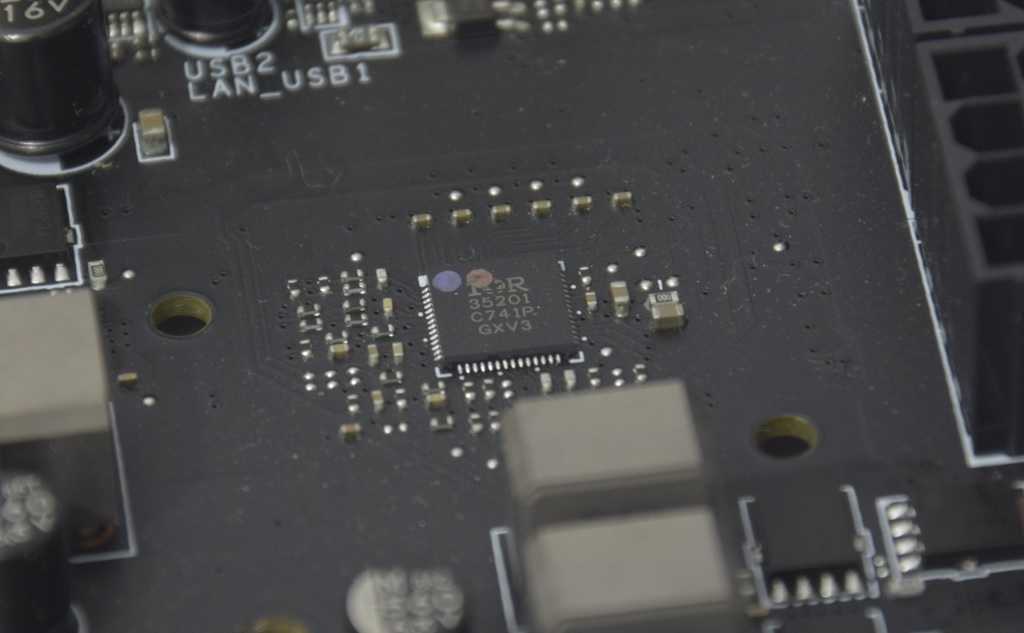 Each stage is made up of two installations that together give maximum 40A current. Such a 12 system gives 480A current capacity to the processing core in the socket. The philosophy of designing such a system is that the most advanced processor will consume at most 60% of the total capacity. This is similar to providing the power to the entire computer so that the ratio between the efficiency of electricity production and heat emission will be maximized. These installations also have an efficiency curve that is important to meet.

Processor core A typical 9K i9900 will consume approximately 230A when attempting an 5Ghz frequency along with voltage Core Typical of about 1.3V. In other words,MSI TO Z390 ACE is worthy of such a situation.

MSI chose to give this motherboard two 8PIN power inputs to the processor. There is no technical reason for this because the ability of a single connector is not far from physical 500W. I can see the logic of combining 4PIN next to 8PIN but not so 2 like this. In any case, only one 8PIN connection is required for full system operation with The fast 9900K so there are no worries about it. 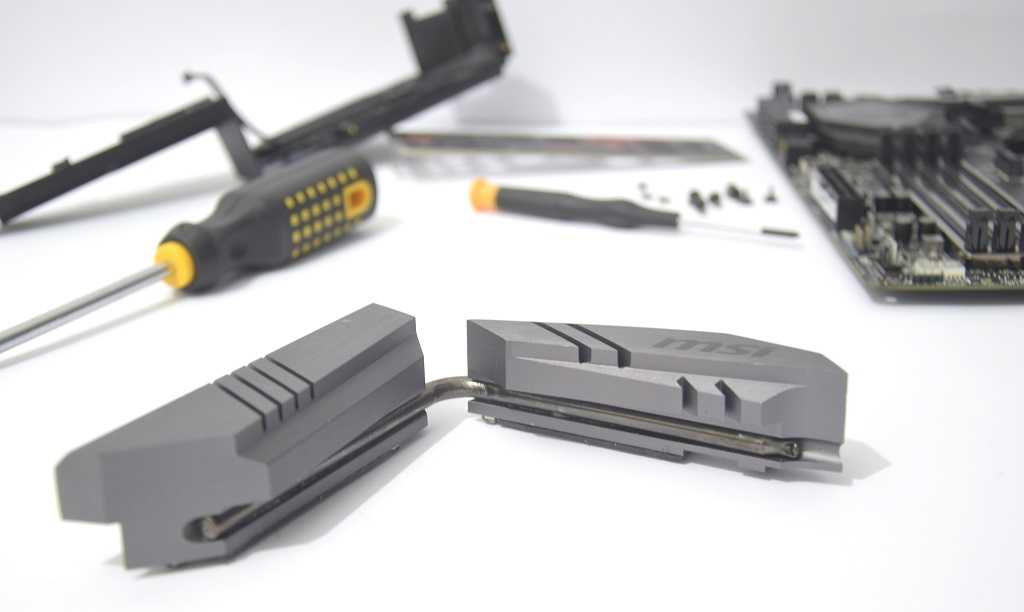 This heat supply system is responsible for this heat sink. I would rate it properly and the copper tube that conducts heat plays a very important role in the system since its conductivity plays an important role in balancing the temperature between the two parts of the body. The surface area of ​​the body is quite mediocre and, apart from a few cuts, there is not a large area where the heat can disperse. I would love to see MSI in the future moving on to my body Cooling Which have a large amount of cuts or even aluminum fans such as video card consoles today.

It is time to check the efficiency of this cooling system and how the MEG Z390 ACE stands incore i9 9900K Furious. For this we used the processor in 3 modes.

The numbers are redirected in all Motherboard To ensure that the frequencies and voltages are suitable for electricity consumption.

These situations fairly reliably describe the variable load states of advanced motherboards with such a processor. The ambient temperature during testing is 22 ° C. No fan was set on the system as opposed to the air flow it would receive inside an enclosure, so this test describes the worst case scenario compared to a typical motherboard. 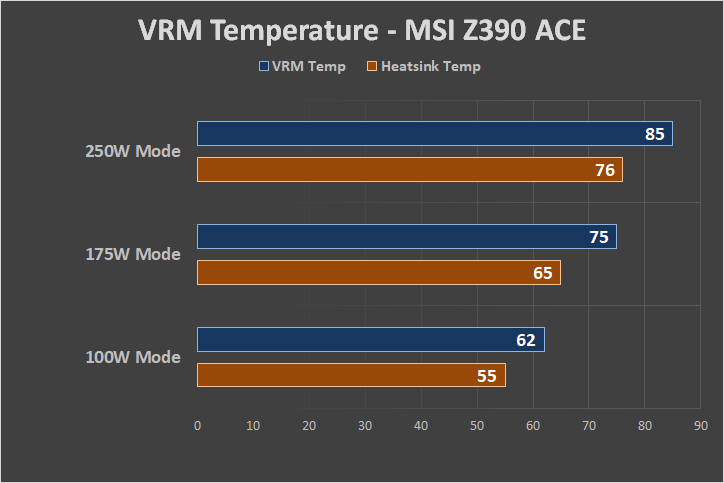 The voltage stabilizer temperature (VRM) is measured on a self-stabilizing body, so that 15 should be added to our estimate to reach the number within it. The maximum permissible temperature of stabilizers is 115 Celsius. Above this they actually turn off or operate a frequency reduction mechanism for the processor. Using an infrared meter, we also tested the highest surface temperature on the heat sink itself, described as Heatsink Temp.

Motherboard of MSI He easily stood up to the various tasks. Even under maximum power consumption and an hour of effort the reported VRM temperature is 85 ° C or as 100 degrees internally. It is important to remember that no fan is aimed at this area and that the effect of air flow is minimal. A fan in the area can easily lower the installation temperature at 10 ° C. Proper airflow within this enclosure can also reduce 20 ° C and more than the installation temperature.

As far as we are concerned MEG Z390 ACE of MSI is fully accredited to deal with core i9 also under 9900K Cooling Air and under Cooling water. 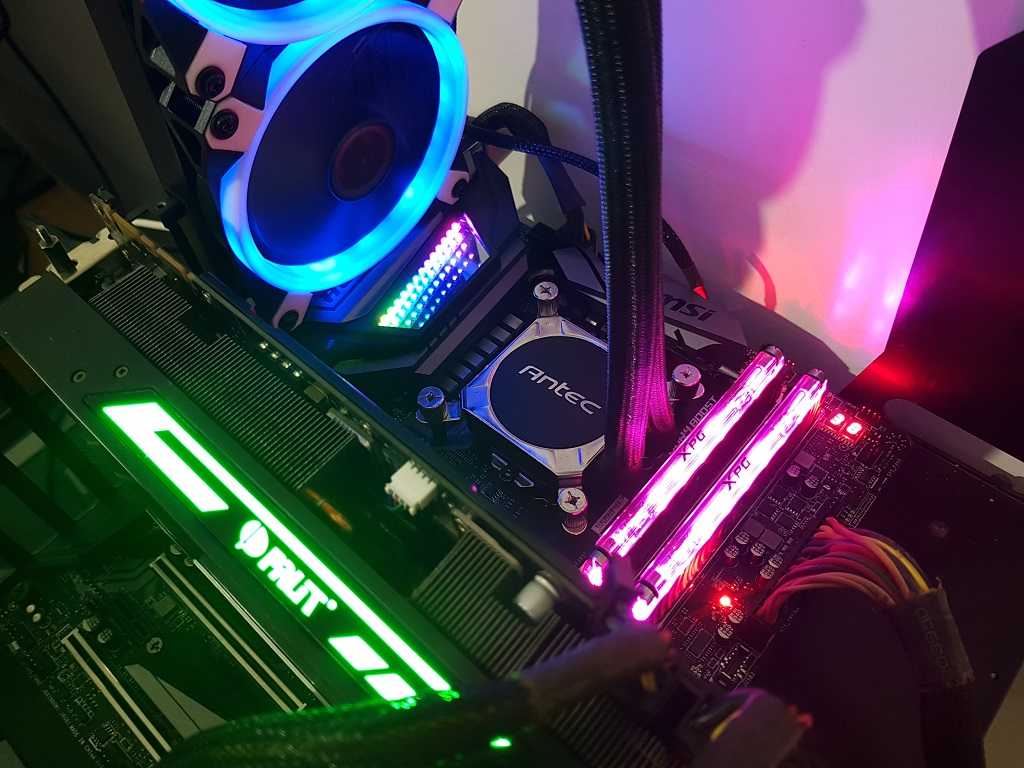 This motherboard design is actually the most solid I've come across in the Z390 generation so far, I have to admit. We usually use motherboards full of RGB lamps and MSI is relatively gentle. The only RGB lights you will find on the motherboard itself are the effect of the endless appearance on the motherboard Cooling Voltage stabilizers.

Other lights in the picture just come from the various components. I admit I did not believe I'd say it, but I could MSI Also incorporate some bulbs RGB More on the motherboard. Maybe in the chip set, maybe under the board on either side. It is always possible to turn off bulbs that do not want to be lit, but it is difficult to light up where there are no lights at all.

In summary, it is important to note that this is one of the most solid motherboards we have seen fromMSI In recent years. It seems that the company and the world of motherboards as much as making correct steps towards the next of a more seamless and stable experience for different users.

In the spectrum of "Who is Z390 ACE destined for?" I think I would place the motherboard mainly for aspiring end users on the gaming front and various Adobe Ae \ Photoshop style editors. The number of ports and variety at MSI allows for dealing with a multitude of means storage And expandable as capture cards or accessories that connect on-USB The standard is particularly fast.

As a motherboard for gaming and overclocking, it certainly does the job, and one of the most respectable bonuses is the ability to WiFi at 1.73Gbps speed, which would otherwise cost you quite a bit of a byproduct.

At a price of about NIS 1,500 per consumer it definitely belongs to the higher level of motherboards and here I think we should also introduce the aspect of overclocking. Unlike the motherboards that are cheaper than the Z370 series Z390 Budgets, here you have the confidence in speeding chips like i7 9700K or i9 9900K demanding. In addition, visibility is visibility and this motherboard's color scheme may also be part of the purchase consideration.

This motherboard easily finds its way to HWzone's recommended list. It has successfully passed our electrical system test and provides a wide output of ports and connections.