Architecture Day 2020: Graphics Division of Intel Introduces a new hierarchy of architectures for graphics accelerators - from laptops to servers and supercomputers. Xe Another moment here

When you hear about "Intel's built-in graphics core", many of you are probably thinking of a rather weak graphics core whose whole purpose is to provide a display capability for a computer, and not much beyond playing videos and two-dimensional games. Can not be blamed, this is a mostly correct claim, since the average graphics cores you will find in my processors Intel Many are unable to accomplish much beyond that.

Admittedly, thanks to a huge investment in a new, successful graphics division Intel Quickly climb the ladder of ability and power of its graphic cores and already strives for wide assimilation of Processors Such parallels in server farms. 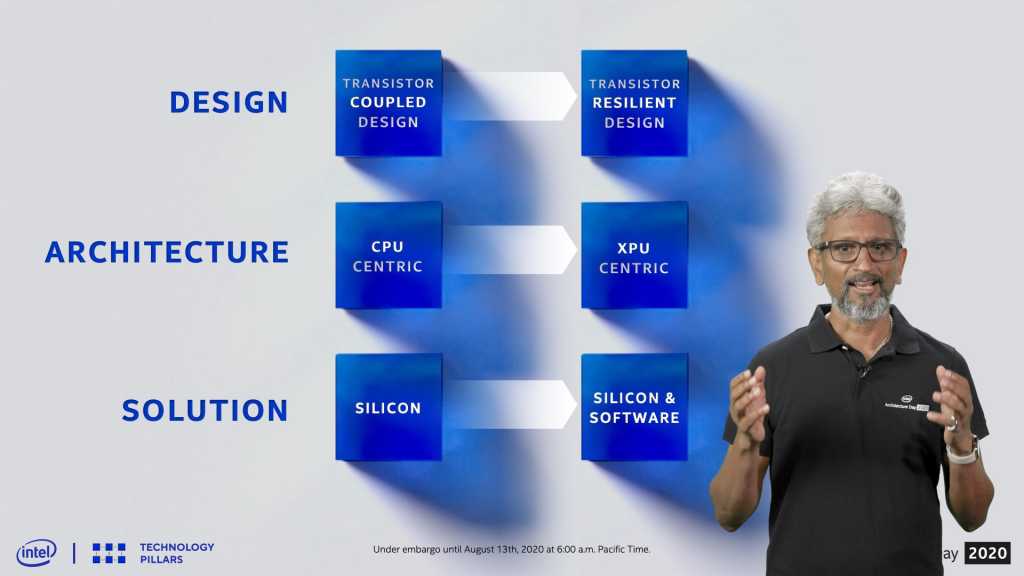 This man, Raja Koduri, joined Intel in 2017 to build for the first time a serious graphics division that would go over advanced architecture from scratch. He came to Intel with many graphics architectures in his portfolio, mostly products Radeon Technology Group. It can be said that the creation of NUC 8 that included such a graphic core probably became an event that caused many of his crews to join the ranks Intel In order to establish a serious graphics division. 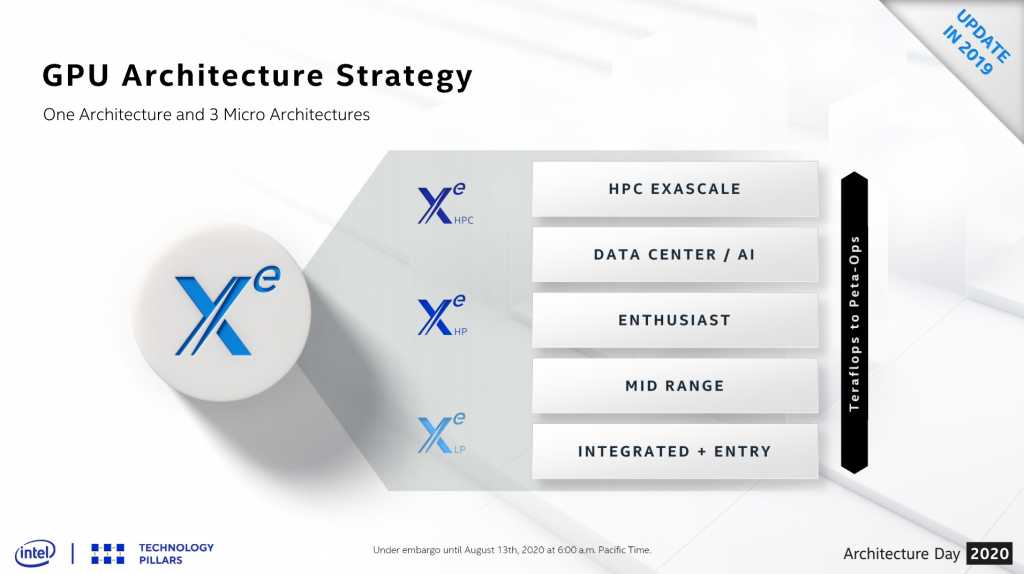 Graphics Division of Intel Invented a new brand that puts under it all the graphics architecture products - Xe. This brand has various segments in the market, ranging from graphics cores integrated in processors, through graphic cards For gaming in the middle and high market, through implementation in workstations and server farms. The reason for inventing graphic cores in server farms is mainly due to their parallel processing capability. Core Graphics includes a high number of processing cores capable of performing small quantity computational output, unlike general processor cores which find a huge computational output but for a small amount of cores. 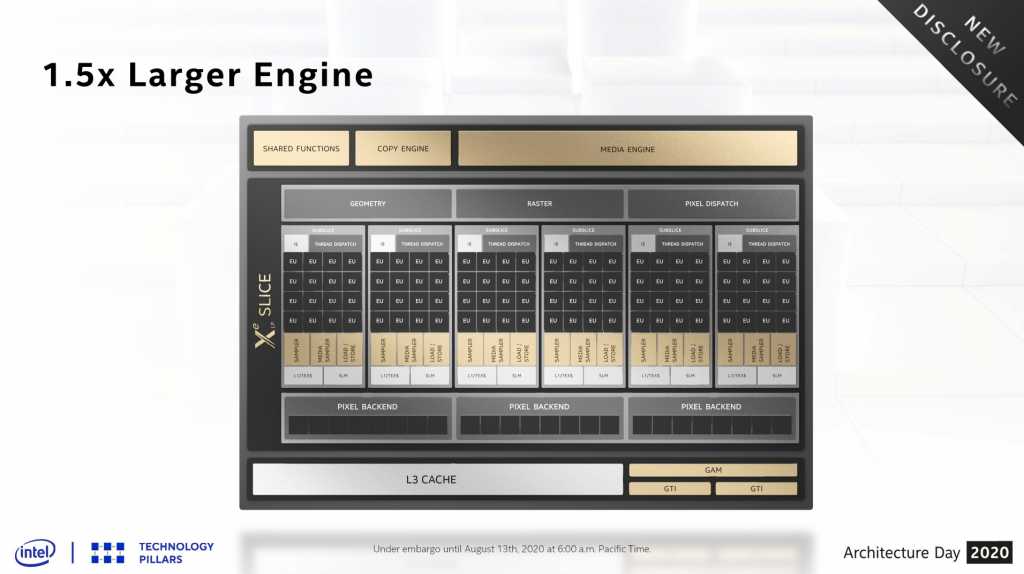 The architecture of the built-in graphics cores is called Xe-LP (Low Profile). What you read here is actually the graphics core you will find in the new Tiger Lake processors. Core It contains 96 processing sets with a total speed of 1,536Flops per clock cycle. 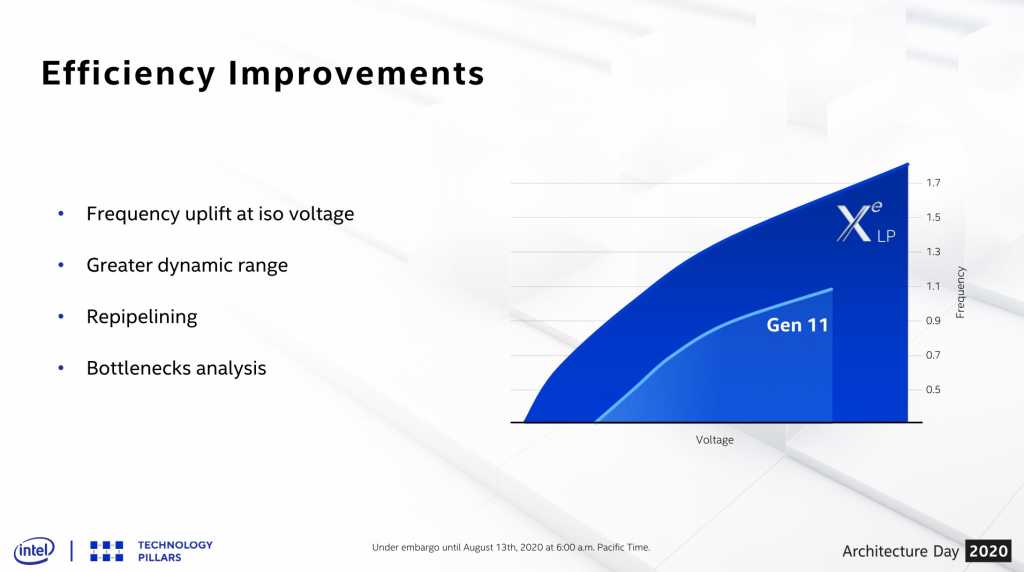 As a result of the manufacturing process from the improved architecture, Xe-LP makes muscle. In addition to higher overall processing capabilities per clock cycle, the new graphics core is capable of reaching tens of percent higher operating frequencies compared to the 11th generation we encountered in processors Ice Lake, Beyond the 1.7 Ghz line. Also, the range of working voltages becomes significantly dynamic. Promise "after we double the graphic power, we'll double it again" and the probability seems to be quite high. 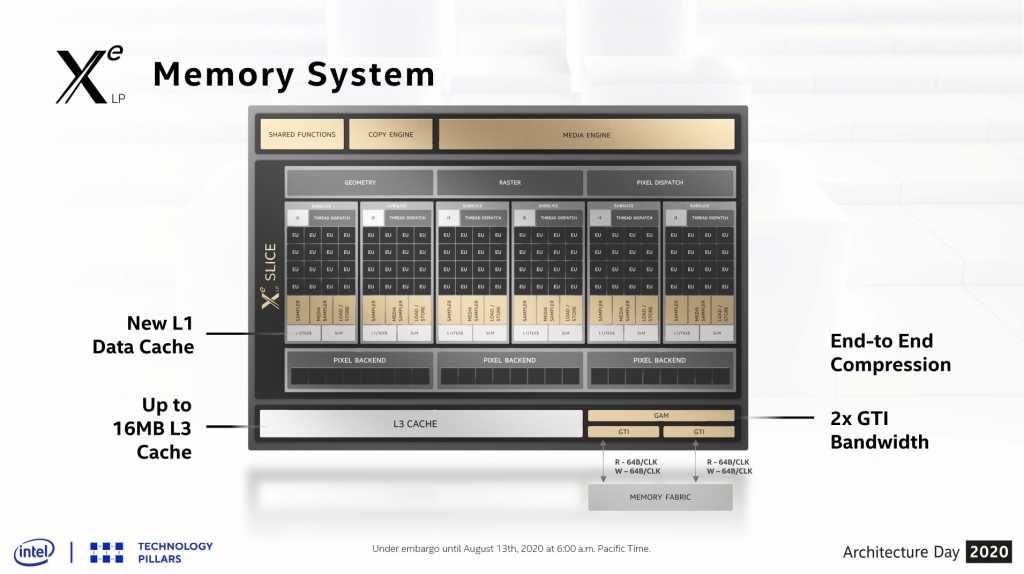 Cache is one of the most important components of any processor, and the Xe-LP added first-class cache as well as 16MB of third-party memory. The graphics memory traffic path is in two channels of 64Bit per clock, so it actually runs at a width of 128Bit. This graphic core shares the same memory.RAM The processor will share.

Advanced graphics core is not advanced without good coding and display engines. Xe-LP has a media engine that supports content acceleration in the AV1 encoder that is becoming popular on YouTube and other content sites. Also, support for HEVC encoder and support for standards like HDR And Dolby Vision.

When it comes to connecting to monitors and display media, the Xe-LP supports transmission for up to four monitors. Its display standards are DisplayPort 1.4 and HDMI 2.0 which may not be the latest, but are suitable for displays of 4k and also 8K Acceptable transmission frequencies. The maximum transmission frequency is 360Hz. 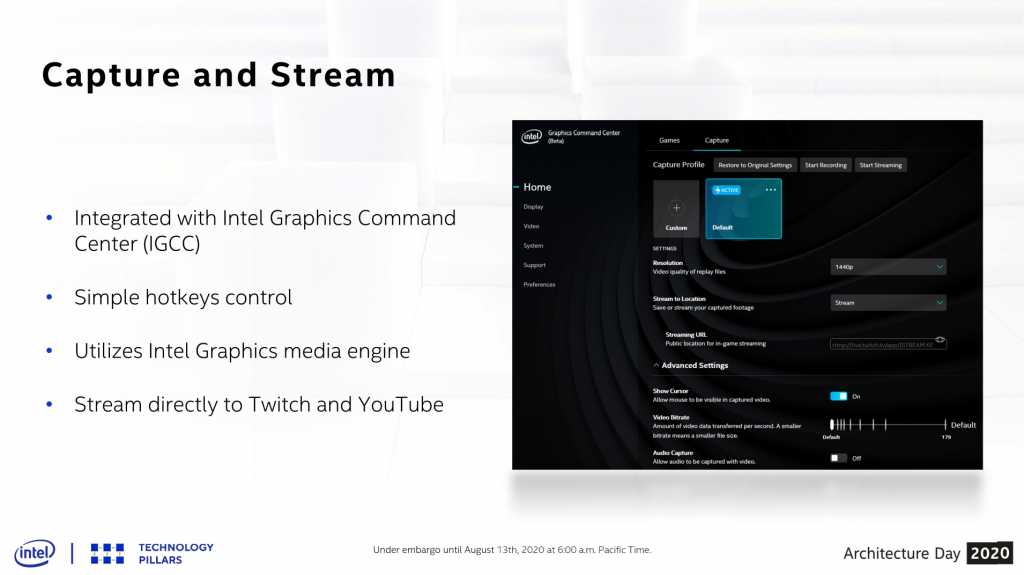 Thanks to the Xe-LP media engine along with the development of a friendly and simple interface, users can control a variety of settings and also stream the display from the computer easily and without unnecessary loading from the processing cores themselves to perform the coding using software such as OBS. The Graphics Command Center of Intel In the last year, it has become a modest tool for multi-option software that is ready to receive many users and various graphic intensities for gaming and other uses.

Intel has many tools to help increase performance, including support for VRS (Variable Rate Shading) technology, which according to the importance of the object is based on a certain resolution. This is to get everything on the graphics core without significantly losing display quality. Updates to a variety of such filters specific to each game are important when they are ready to keep the gamer up to date. 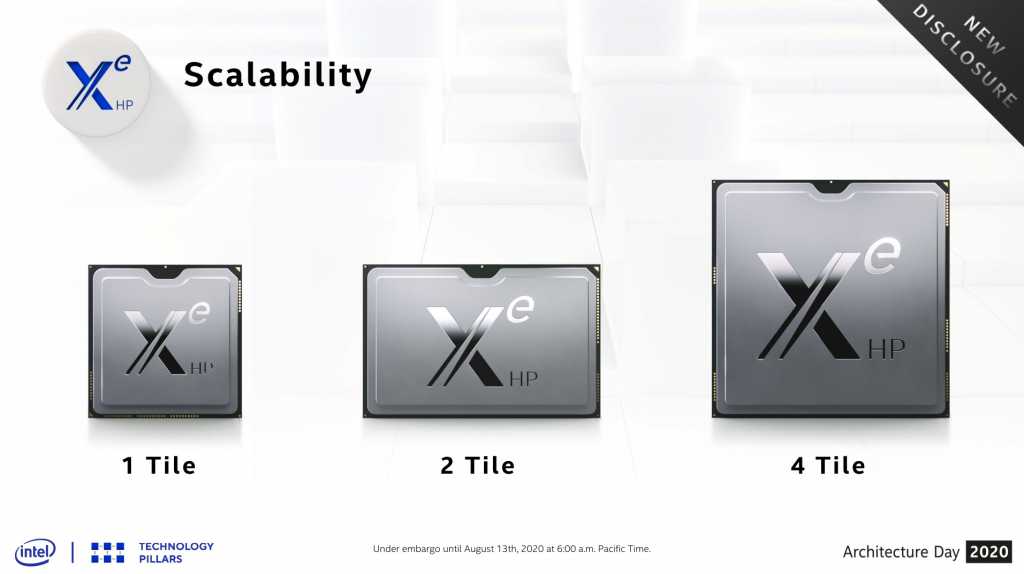 The Xe-HP architecture is a variant that can be implemented in various server processor configurations. Already now, Intel Announces three versions of such processors, with chip One, two or four units Xe-HP In content. All are based on 10nm SuperFin, all using the traditional EMIB method for inter-chip communication. We will hear about these products below.

But what about the gamers ?! Where are our video cards? 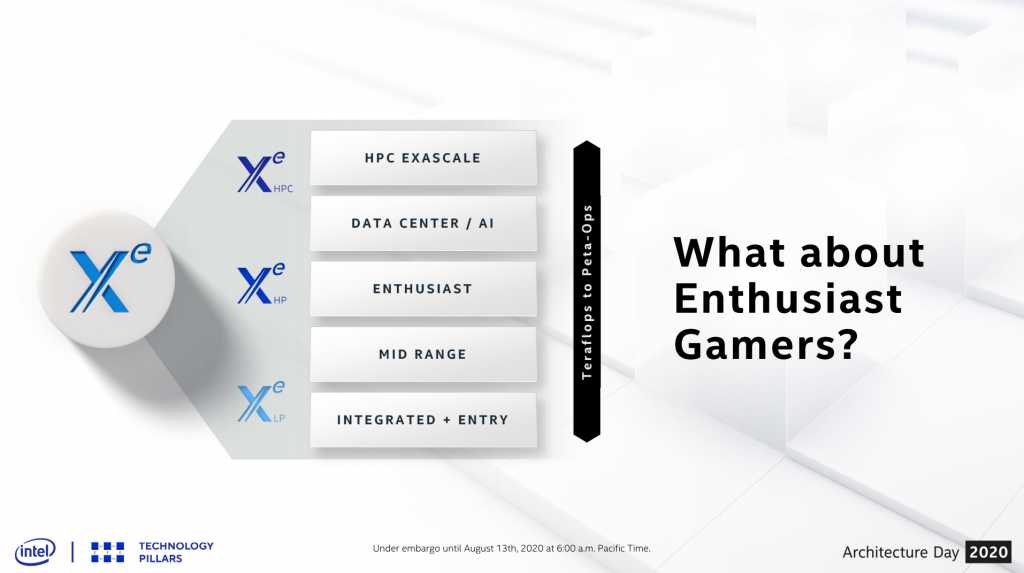 It is likely that what interests most of our readers will be this segment - Video cards dedicated to desktops. Intel Entering a market where there are two very powerful players, with decades of three-dimensional processing evolution and a market that is always thirsty for more.

Raja Kuduri submits - "Regarding gamers' requests, we hear from you. I'm happy to announce the Xe-HPG architecture, which contains the most important features of all the other Xe architectures. architecture This contains support for Ray Tracing. We will launch gaming products based on architecture This is in 2021. " 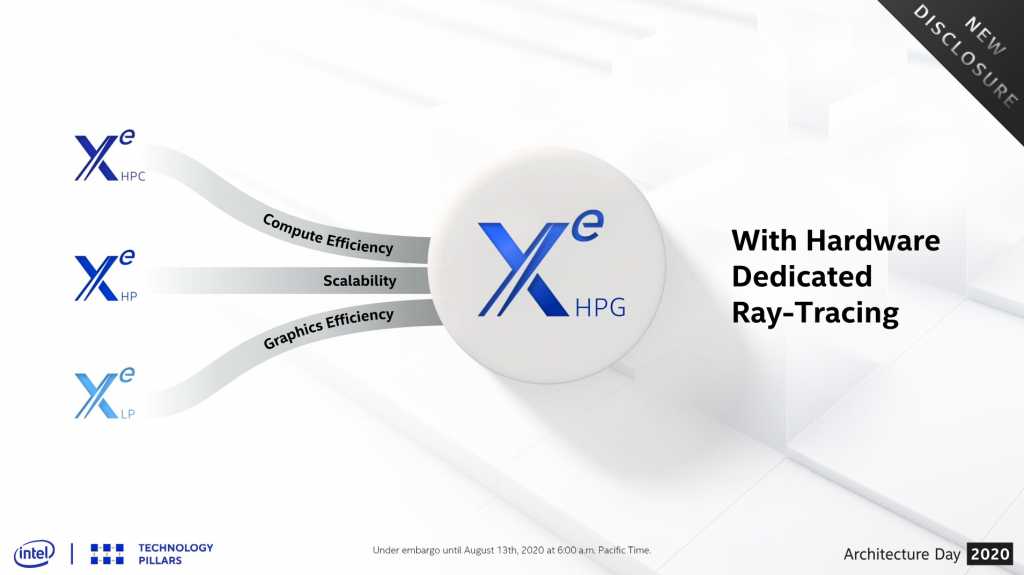 It will be interesting to see the gaming products of Intel And which approach will you choose in terms of marketing these products, as by 2021 this battlefield will become significantly more difficult, with other monstrous architectures in the field expected to hit the world air in the coming months.

The products that contain Xe-LP cores will be seen in the coming months with the launch of computers Mobile Core owners Tiger Lake. Expect our extensive and close coverage on the subject!