The next generation of Radeon: computational learning without restraint

CoresZen attitude 2 may have stolen most of the limelight because of its potential and significance as a basis for the long future, but one can not ignore the architecture Vega For graphical processors, who will have a new life thanks to a very advanced 7 nm manufacturing process - for the computational learning world first, and maybe even exclusively.

AMD officially introduced its Radeon Instinct MI60 and Radeon Instinct MI50 accelerators to compete with leading Tesla products NVIDIA Thanks to additional hardware elements that enable them to operate at maximum performance in floating point calculations with twice the accuracy of 64 bits (i.e. half the full processing power in standard 32 bit floating point calculations, compared to a quarter in previous generation accelerators), and also thanks to support for 8-bit integer calculations And 4-bit that are very effective for tensors that form the basis for deep learning.

CoresVega The new bases include the same 64 performance clusters with a total of 4,096 units, or over 13 billion (!) Transistors in a total area of ​​just 331 square millimeters for unprecedented (almost) unprecedented density, with the promise of a possible up to 25 percent improvement in performance at the same power consumption Compared to cores Vega 10 in a 14 nm production process, with the intention likely to raise the practical operating frequencies by about 25 percent under the same power consumption and heat emission.

The Vega 20 cores in 7 nm lithography will be pinned in Radeon Instinct models to four HBM2 Plus chips of up to 32GB total, providing tremendous effective terabytes of bandwidth (1,000 GB) per second - combined with PCI Express 4.0 dual speed that connects the accelerators to the main array processing units and a pair of dedicated 100 GB bandwidths for one second that allows up to four cards to communicate directly and operate together, similar to the NVLink solution from home NVIDIA. 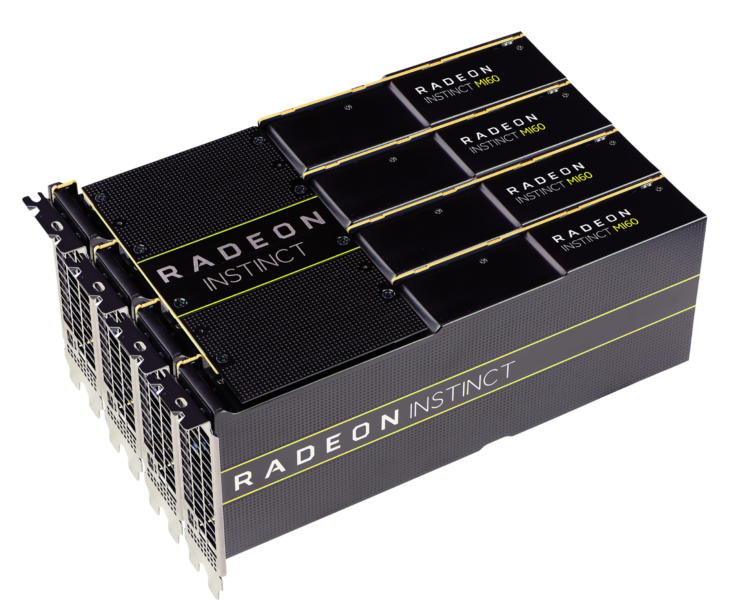 Despite the fact that this is a very large chip for advanced lithography that is in the early stages of maturity, the red chip developer ensures that first-time customers will receive the Radeon Instinct MI60 before the end of the current quarter, ie before the end of 2018 - which will be quite an impressive engineering feat. That can assist in gaining some market share fromNVIDIA prima facie.

Would you like to see the renewed Vega in the 7 nm coming to the gaming market, despite the fact that,AMD Have not provided any statement or clue in the meantime? Or is it better for a developer to concentrate efforts on polishing the cores?ships Of the new generation for home users (even if it means another six months or more without new announcements)? Tell us in comments.