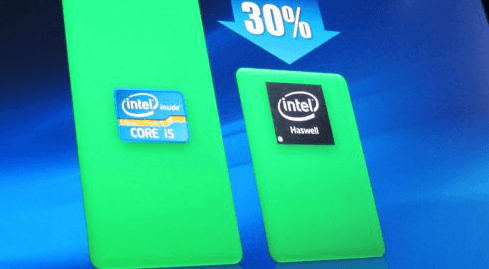 Although we are a few months away from launch, future processor performance of Intel Look around the web
On the hardware site Tomshardware, A hardware site where we ourselves read a lot of news, conducted a quick review of an early version of the processors -Haswell From home Intel. The coverage included both the general processing core and the core of the processor's built-in graphics and is expected to yield the greatest improvement in performance against the next generation,Sandy Bridge and the-Ivy Bridge.
The first synthetic tests performed on the processor prove previous rumors. When theyCore i7-4770K, Are theCore i7-3770K And theCore i7-2700K Tuned to a frequency of 3.5 GHz (on the count to check for improved architecture efficiency), the difference between the processors is not at all significant and stands at 13 percent in the extreme case.
The great surprise in the processors comes, as expected, in the form of a significantly improved graphics core. It 's still not something thatAMD What to fear, but it shows the feverish pace in it Intel Pastes gaps. On desktop computers, the ones they bought for themselves Core i7-4770K Such as the one in tomshardware Will probably buy a video card that costs a few hundred shekels more, so they will not feel any improvement.
On the other hand, Haswell He was never really meant for the tables. The very fact that the processors will contain the core of theGT3 More powerful than the core of theGT2 Will only be available in the cradle BGA (That is, the pins in the processor and not on the motherboard as we used to sit LGA) And Shah-Core i7 4770K Comes with heat emission casing 84 Watts only show that the true purpose of the E-Haswell Is actually the mobile computing it is fighting for Intel In recent years. The very fact that you will not have to Core A separate graphic will be an advantage in both performance and battery life.
Unfortunately, theHaswell Apparently will not bring a big line to the tables and those who bought processors Ivy Bridge and even Sandy Bridge You do not have to feel like it's time to upgrade or as if your computer system is out of date. The performance they are able to give will be ample for now, let alone if you purchased a sample processor Core i5-2500K Or higher capable of switching Overclock.
Tags: IntelHaswellIvy Bridge