The most powerful 15 Watt processor? New evidence of the existence of the Ryzen 9 4900U • HWzone

The most powerful 15 Watt processor? New evidence of the existence of the Ryzen 9 4900U

The fresh mobile H models from home AMD We've been able to impress us with their performance and efficiency - and what about an octagon processor with only 15 watts of casing? We may get answers in no time

The Ryzen 7 4800H and the Ryzen 9 4900H, with eight cores of processing and a generous 45 watt power casing, stole the show as part of the launch of the new generation of mobile processors AMD, And probably rightly, with similar or superior performance proof over Coffee Lake-H's processors Intel And operation efficiency is clearly superior - but you shouldn't forget that the red chip developer has an equally intriguing second batch of new four-core U-processors, six-core processing and even eight-core processing under a tiny 15-watt casing.

The poster boy for this family is officially theRYZEN 7 4800U - but will soon see the official launch of a model RYZEN 9 Even more elaborate? A new leak from a source of solid reputation on Twitter manages to further increase our interest in these models.

The Tum_Apisak leaker provided תמונות From the 3DMark and UserBenchmark test databases for the Ryzen 9 4900U model, with 8 physical processing cores and 16 logical processing cores of course - similar to the Ryzen 7 4800U already officially introduced with 1.8GHz base speed and maximum turbo speed Of 4.2GHz combined with the core Vega 8 built-in graphic. 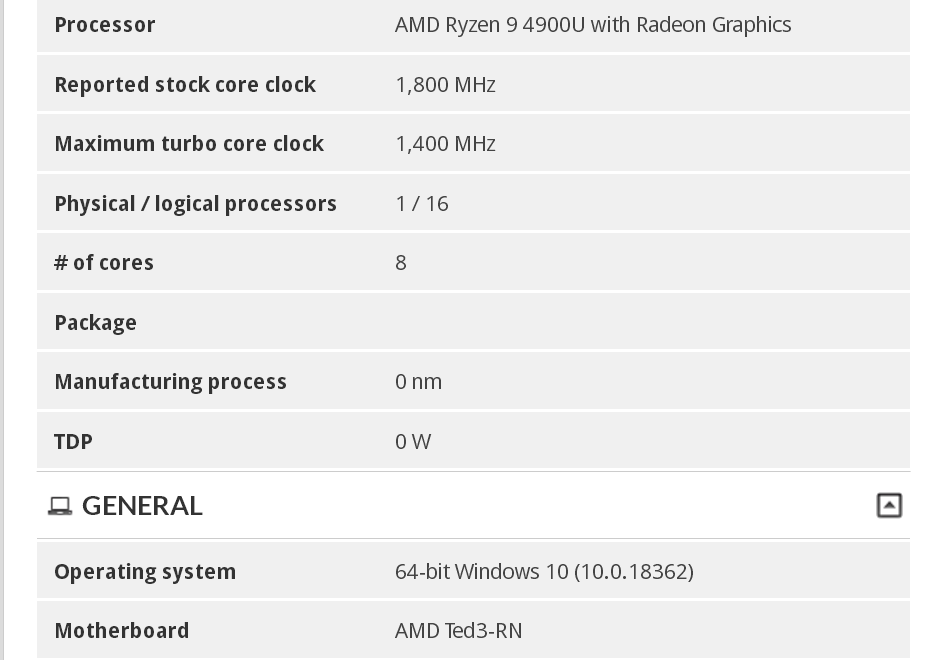 Unfortunately, the documentation in question seems to be relatively early in the exam process, so the data reported to them does not make much sense and cannot suggest to us the priority capabilities that would justify the Ryzen 9 model name to one of the Ryzen 7 family - we do not know if we can expect an increased base frequency in Ryzen 9 4900U, Maximum or perhaps maximum turbo frequency Core More powerful graphics with increased number of clusters or ultra high operation frequency.

Given the impressive technical data of the Ryzen 7 4800U, it is a little difficult to think how the Ryzen 9 4900U model could improve supply while maintaining the modest 15-watt power casing (which laptop makers could fit between 12 watts and 25 watts of power accordingly Their preference and the cooling system they provide) - but when you take into account that initial tests indicate Performence Of about 30 percent "only" among theRYZEN 7 4800U toRYZEN 7 Advanced 4800HS, and an even smaller difference between the 4800 HS and many modern eight-core desktop processors, the potential here is very promising.

15 watt processor Mobile For thin, lightweight 13-inch and 14-inch computers that can tickle the performance of 65-watt processors or even 95-watt desktops? We are in favor - and hope to get more reliable data soon.