The chip giant Intel Wants some fresh color in its processor housings and gives us a teaser for the upcoming flagship processor that will launch for gamers in the desktop world. At the end of the current quarter, expected Intel Launch new series of Processors For the LGA1200 chassis with a new processor that promises to take gaming performance to a new upper limit, even though it does so with an amount of cores already considered moderate compared to Processors Other advanced we have seen recently.

Rocket Lake S series of processors Intel Reach the shelves by the end of March and we get a small taste and promise of the performance of the most powerful processor in the series - the Core i9 11900K (we hope that at some point the number of characters in the processors Intel Will decrease). 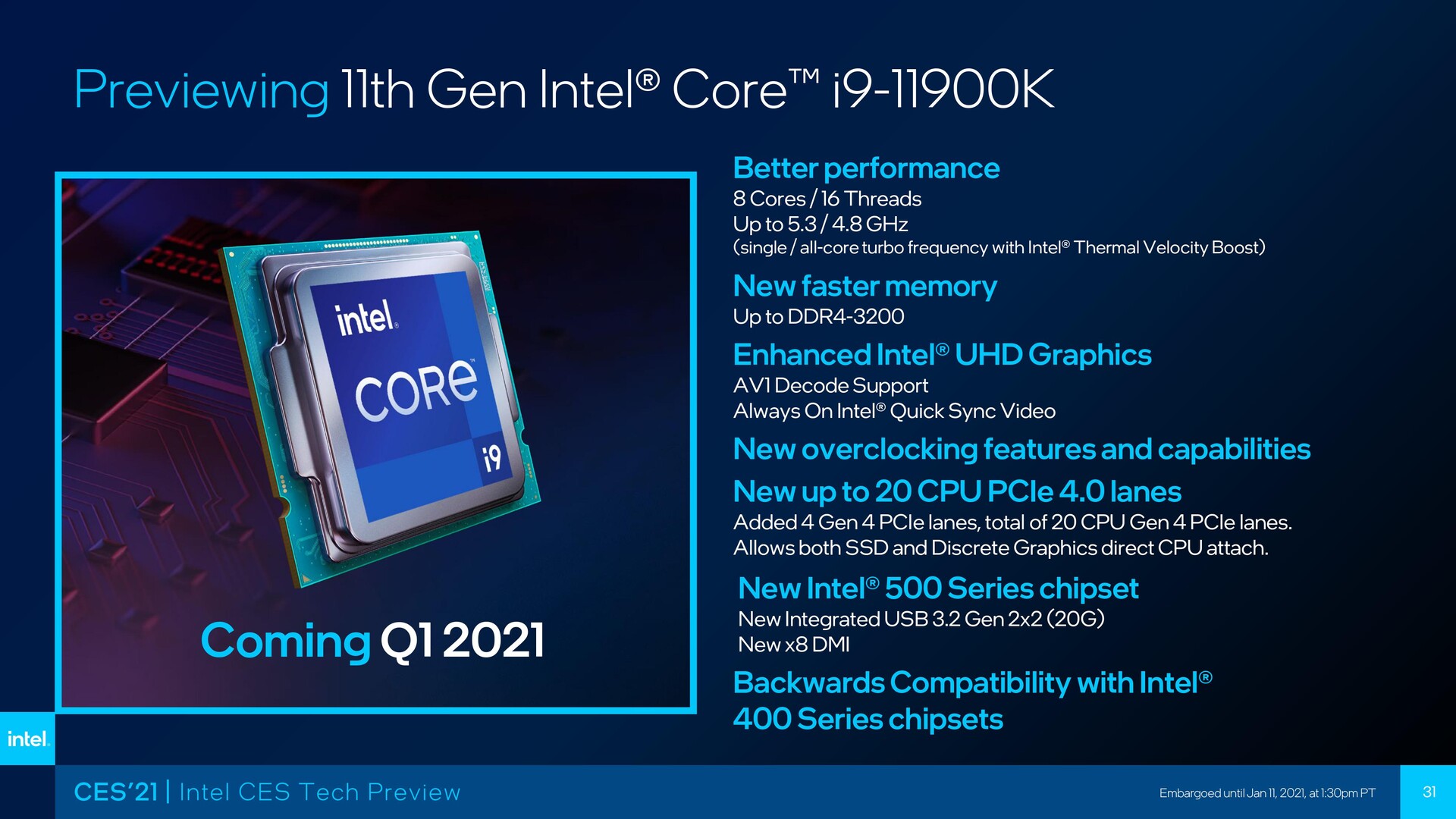 God-Core The i9 11900K promises to be the ultimate processor for the gamer when it comes with 8 processing cores and 16 threads. This is precisely in comparison with the larger amount of cores that exist today in a people's residence Core i9 10900K and its ten cores. The maximum operating frequency is similar to the flagship today and stands at 5.3GHz for Core Individual.

We do get a number of technological refreshes. For example, there is a natural support for memory DDR4 At 3200MHz and yes - this support is for all Rocket Lake S processors, including processors Core i5 clocked at 2666 MHz today. The interfacePCI-Express Updated at last from 3.0 to standard 4.0. Therefore - all means of communication in front of the processor also rise to the new standard that is twice as fast. We also get 4 more channels of PCI-Express, Which will allow a little more connectivity in motherboards. 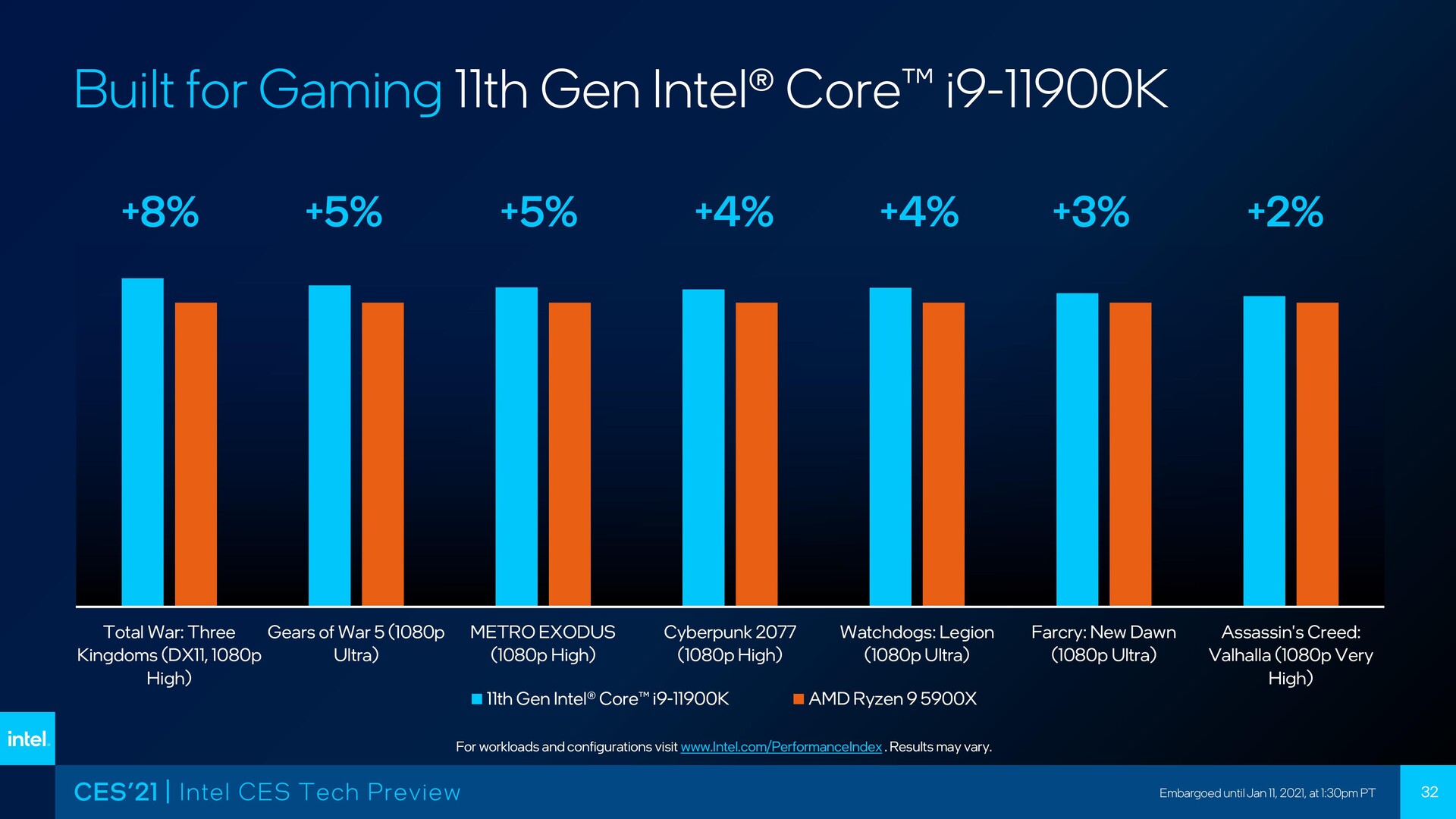 Intel gives a home performance taste of what we are expected to see with the Core i9 11900K compared to what the computer now has a leading gaming and multitasking processor - Ryzen 9 5900X's AMD. A lower amount of cores in free translation is "we understand that gaming is important, the focus is there and there you can open a front." Used Geforce RTX 3080, mirror Intel That one can expect the best gaming performance with its new processor, even when most of the differences are measured in single percentages. 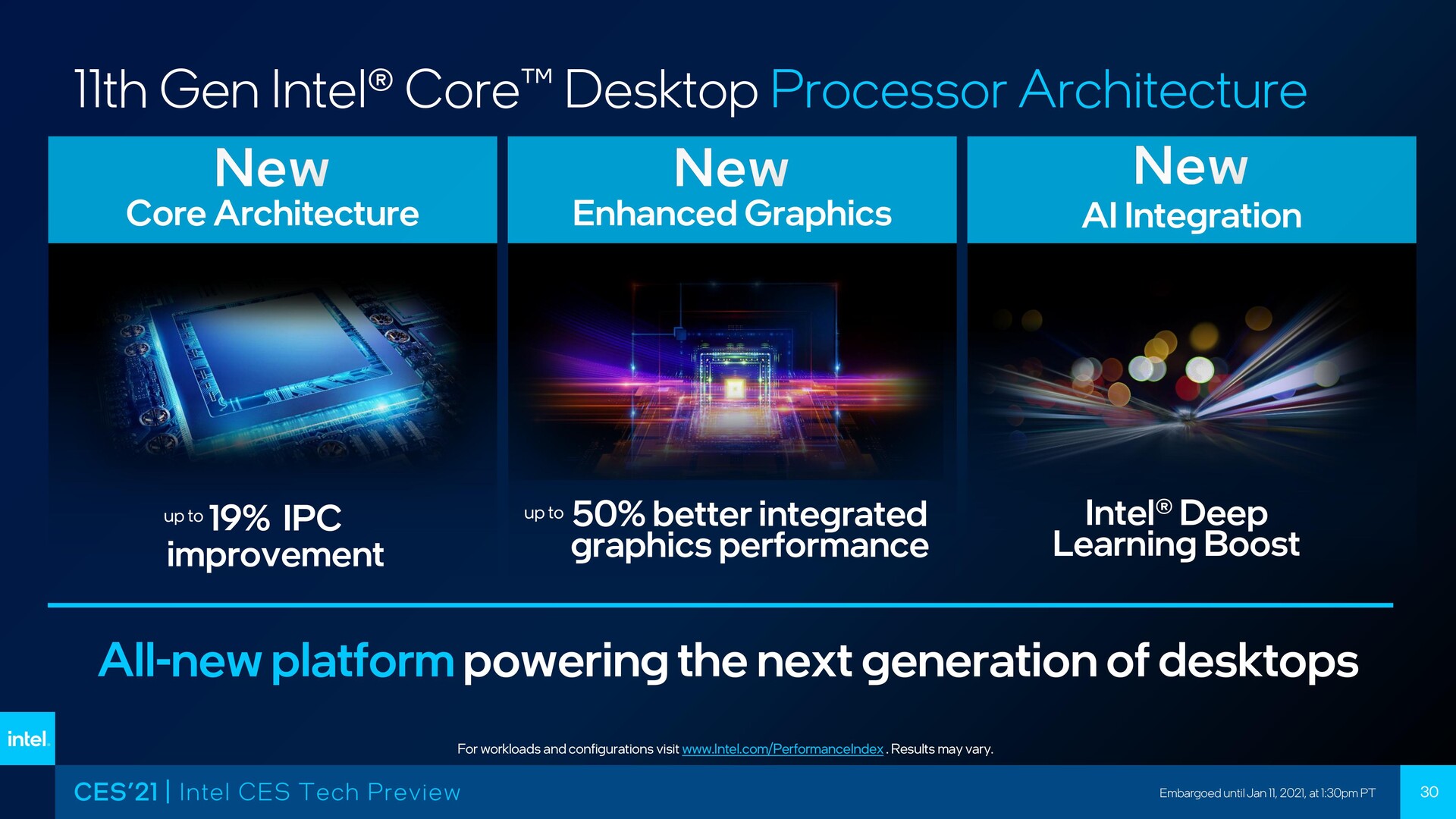 Thanks to a new architecture despite using the old 14-nanometer manufacturing process, it presents for the first time Intel Significant improvement in IPC (RT Instructions Per Clock) performance. This means that even at the same frequency as its previous generation, the new processors are expected to be up to 19 percent more powerful. This is a welcome improvement over the recent serious improvements from the competition.

In addition, Rocket Lake S processors are getting upgraded graphics cores, thus breaking the sequence of using those graphics cores for many generations. God-Intel Graphics Xe The 12th Gen in the new processors is expected to improve performance by up to 50 percent compared to what we have known to date. The advantages of this are that non-gaming uses can also benefit from faster computational acceleration (using QuickSync technology for example).

The big question that is currently left in the air is what will be the price of the Core i9 11900K and in general what will the prices of Rocket Lake S processors look like? We know that there is a pretty high chance of winning a competition on product availability on the shelves compared AMD And the latest supply issues it has with a series RYZEN 5000. Probably had to wait and see for ourselves.