We took our new weapons AMD In its war for the gamer's heart with new architecture, improved price tag and performance that will make even the biggest skeptics raise an eyebrow - meet the duoRadeon RX 5700

Today is a special day for the hardware manufacturer AMD. Today is the day when it is trying to recapture the desktop userele with its new products, including a product that many have been waiting for to change the view of video cards for gaming and productivity.

Announcing the graphics cards Radeon RX 5700 may not come as a surprise for many after years of leaks and trailers for a new graphics architecture, but now they are finally here. The Navi architecture on which these graphics cards are based is the first to come in a completely different design since the Polaris architecture came into the market with Radeon RX 480 exactly three years ago.

AMD's system for video card launches is the development of a primary architecture, followed by refresher and launch of new products in the years that follow. For example, CGN or Graphics Core Next Launched at the end of 2011 To the applause on which he was based graphic cards Launched even in 2015. After several changes and improvements in this architecture, we saw Polaris as its basis Core Graphical graphics cards from RX 480 and RX 580 models and their derivatives.

Now, the Torah of architecture Completely new to grasp the foreground, with some improvements absolutely required. 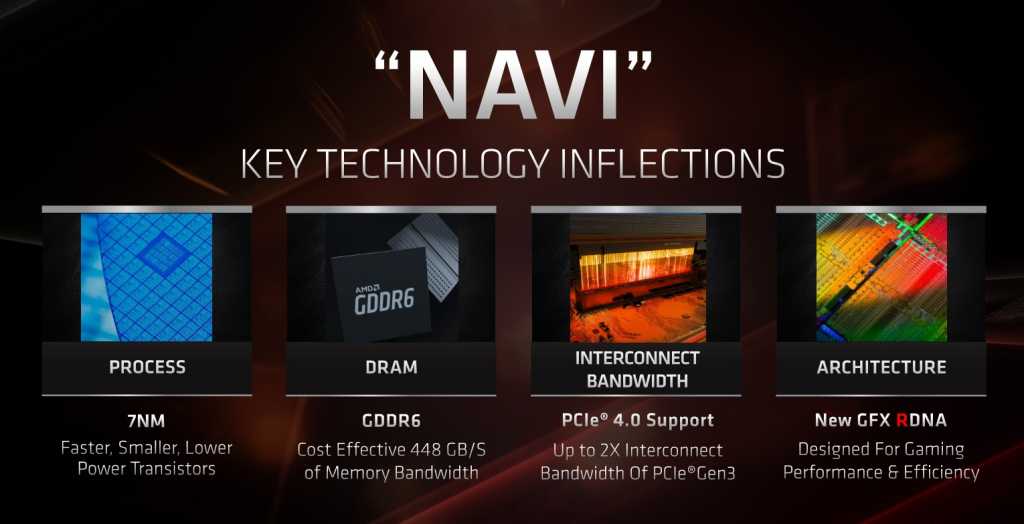 The Navi architecture came to restore the crown to theAMD Using some important key features, the most important of which is the processor to create a nanometer 7 process in the TSMC Taiwanese plant. In addition, fast GDDR6 memory chips are used. At the chip level, the PCI-Express 4.0 standard has also been added, and this is mainly believed to promote the X570 platform and its new processors AMD. Already at this stage of the review I will emphasize - good and nice that a device exists, but is not expected to affect platform users at all PCI-Express 3.0 standard. The need for information traffic is simply not there with these graphics cores, so far. 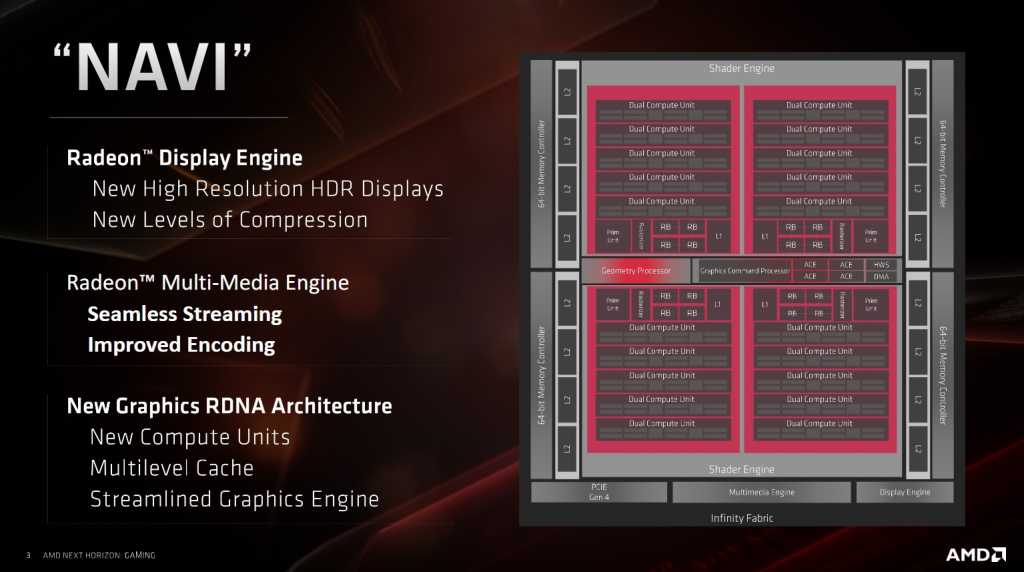 The architecture, as stated, is new in its design. It is clear to me that there is no invention of components or special development of a working method, but sometimes a silicon engineer can perform operations such as increasing cache, acceleration of traffic pipes and faster connection to the PCI-Express interface,AMD Done with Navi. Quantity זיכרון The first level cache was raised, access times were shortened, and frequencies increased. 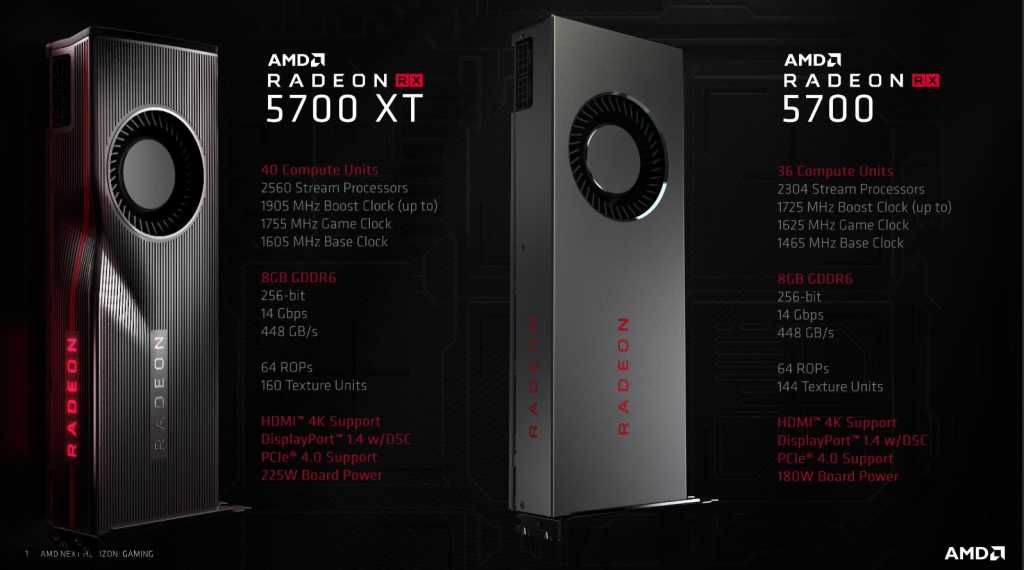 Today, we are going out to the world of video cards for which we have waited a lot. Family Radeon RX 5700 contains the core ships And also includes new technical data.

Big Brother, the Radeon RX 5700 XT is a video card that comes in the price tag of 399 dollars and competes directly with the GeForce GTX 2060 Super NVIDIA. This video card has 8GB of זיכרון Type GDDR6 On the 256Bit width.

As shown in the XT model, the processing core contains 2,560 Processors United.

The design you see here is the default design of AMD And that will be available from today until the day when designs with advanced refinements will come from the manufacturers such as Asus, GIGABYTE, MSI, Palit And others. when will it happen? I hope very soon. The heat envelope of this video card is set to 225W. 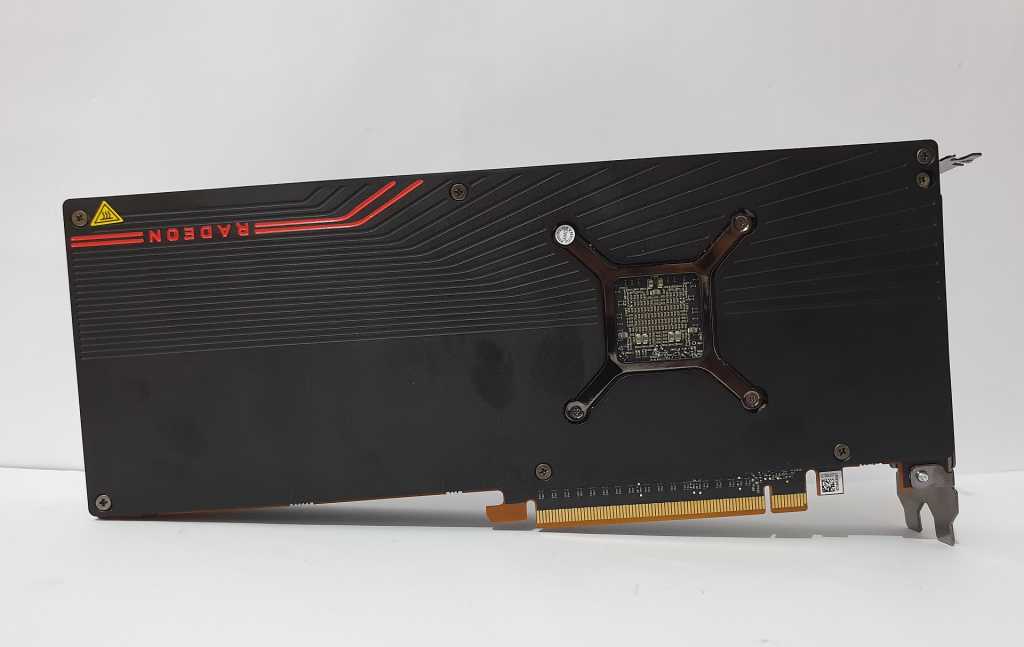 The back of the video card contains a full aluminum plate except for the graphics core area. This plate protects the printed board and improves the card aesthetically. 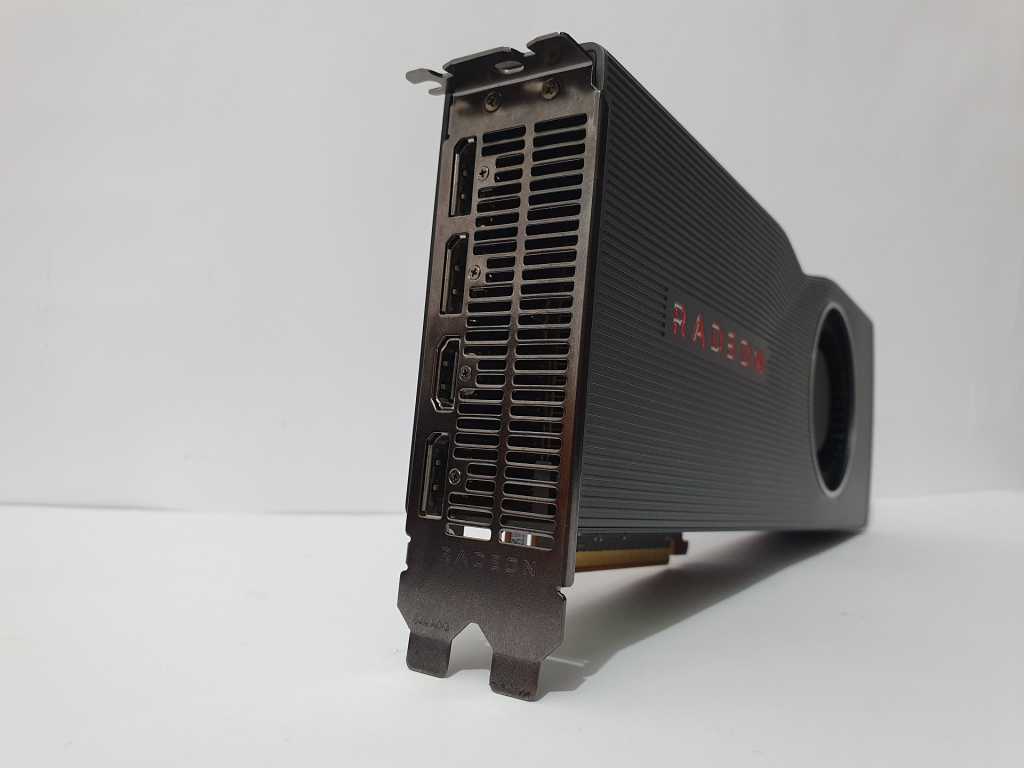 The card display ports have three types DisplayPort 1.4 and one type HDMI 2.0b. Unfortunately, there is no type-C connection that supports VirtualLink,RTX The competitor.

The power supply requirement of theRadeon RX 5700 XT is one 8PIN and one 6PIN. Both connections must be populated for the video card operation. 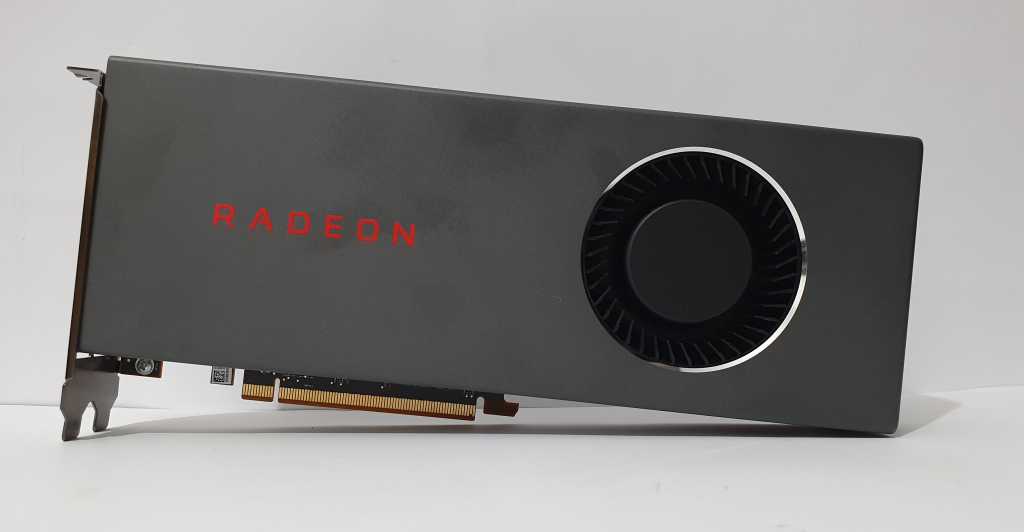 Thus,Radeon RX 5700. This video card comes to us at a recommended price tag of 349 USD, just 50 under the older brother, and is similar in most technical details except the number of processors. Compared to 2,560 unified processors, the XT-free model has only 2,304 and, consequently, fewer textures. also to-Radeon RX 5700 standard זיכרון Type GDDR6 8GB volume. 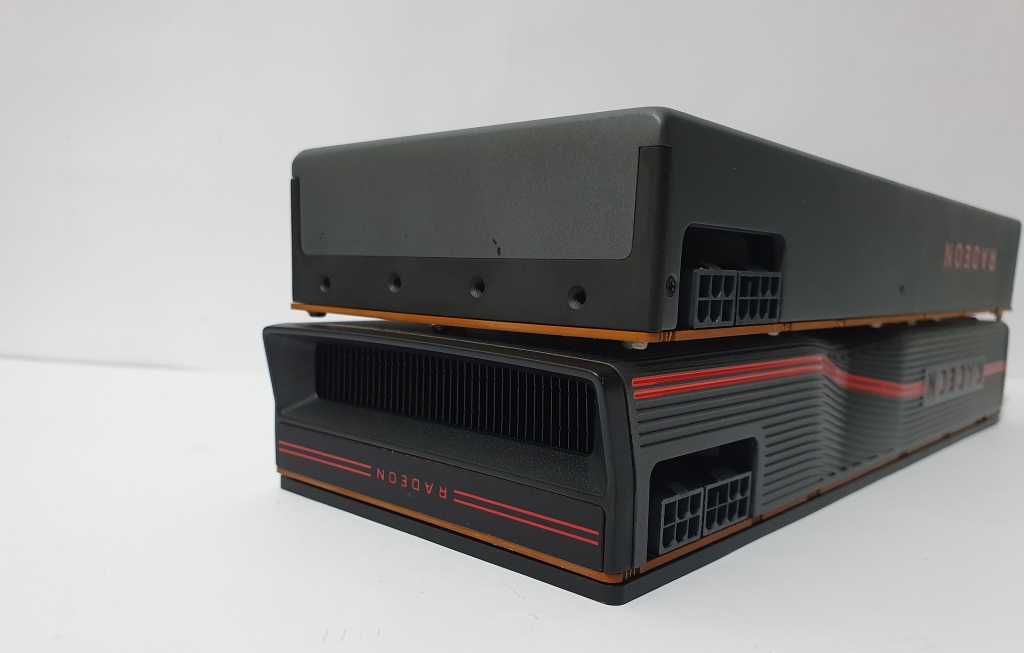 Although the RX 5700's heat envelope is only 180W compared to its brother's 225W, the same type of 8PIN and 6PIN power connections are required. 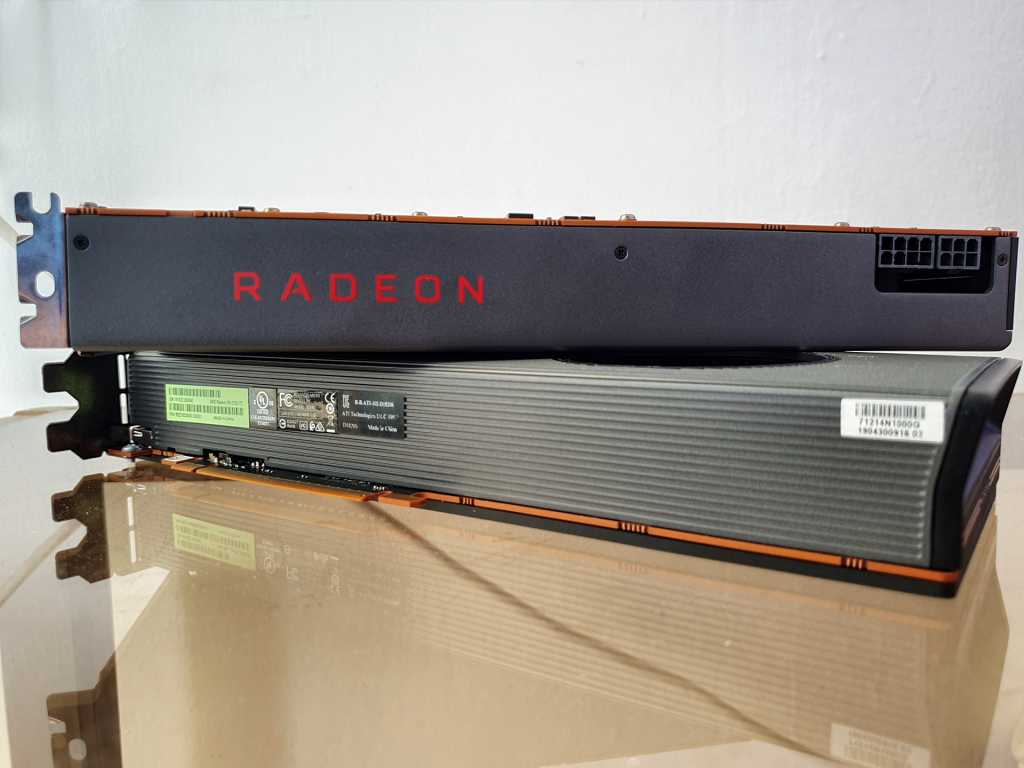 Something in the simple design of theRadeon RX 5700 vs. Big Brother pulls me, apparently the smooth and minimalist cover is all I need. 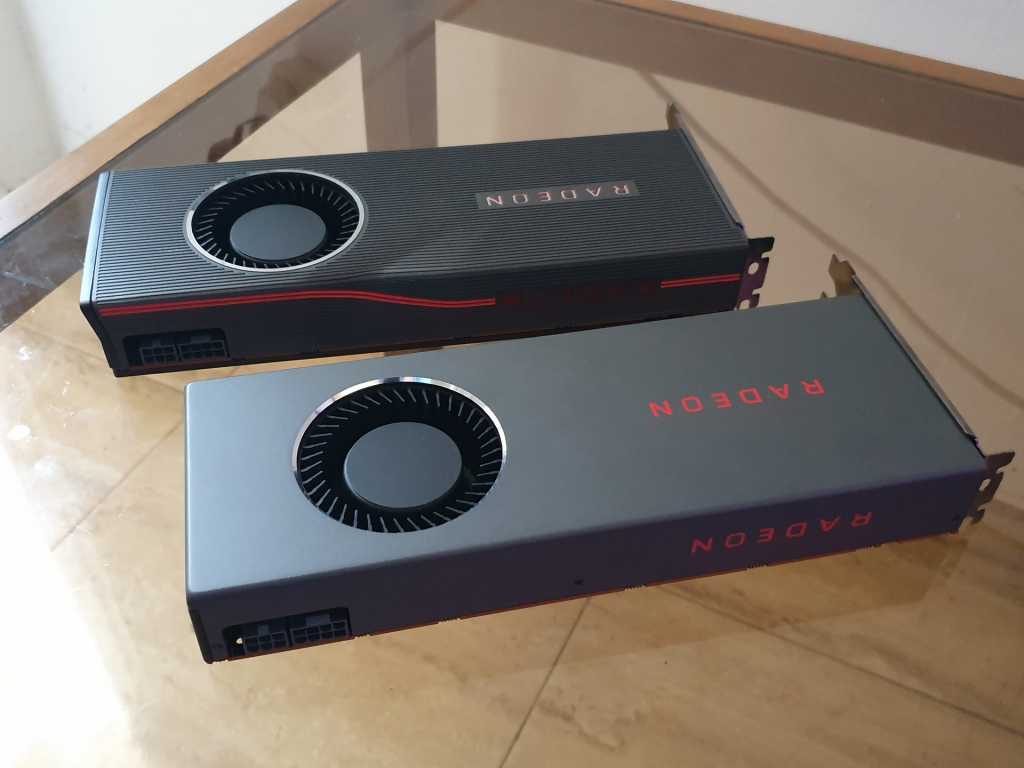 These two graphics cards use the same fan and internal heat sink. The XT back has an additional air-in opening when the standard 5700 back is completely closed, reducing its cooling capacity, and omitting the possibility of running a number array graphic cards Such close together without experiencing overheating. 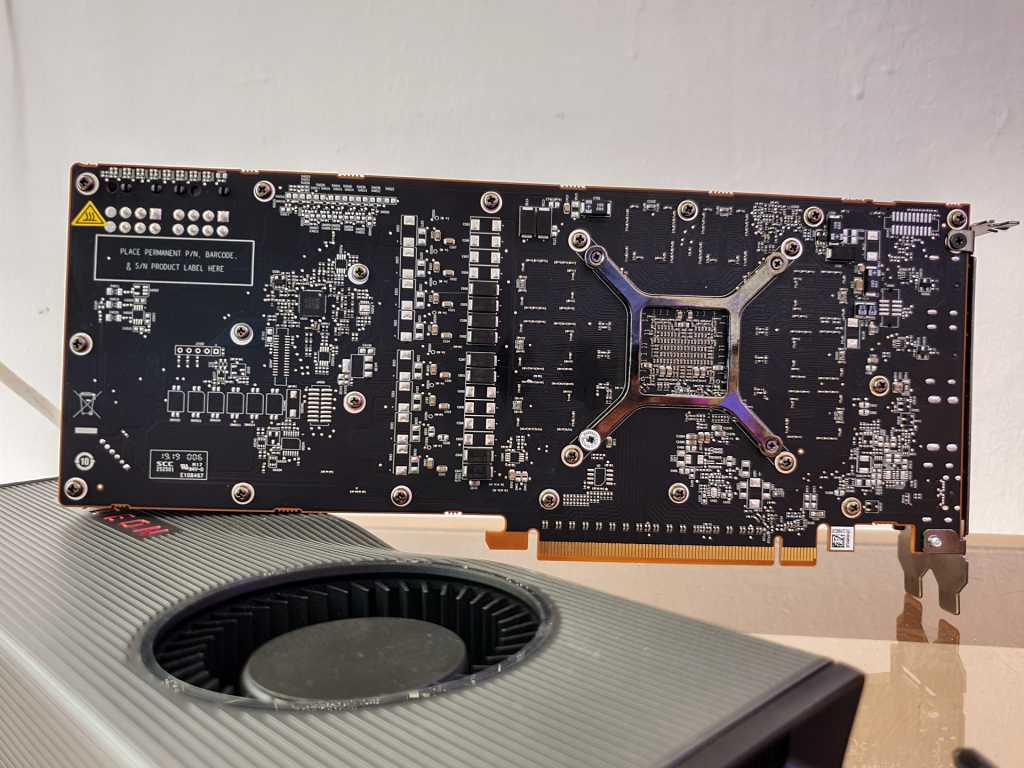 Back-Radeon The 5700 RX does not contain a cover like that of the brother and the printed circuit board is exposed. 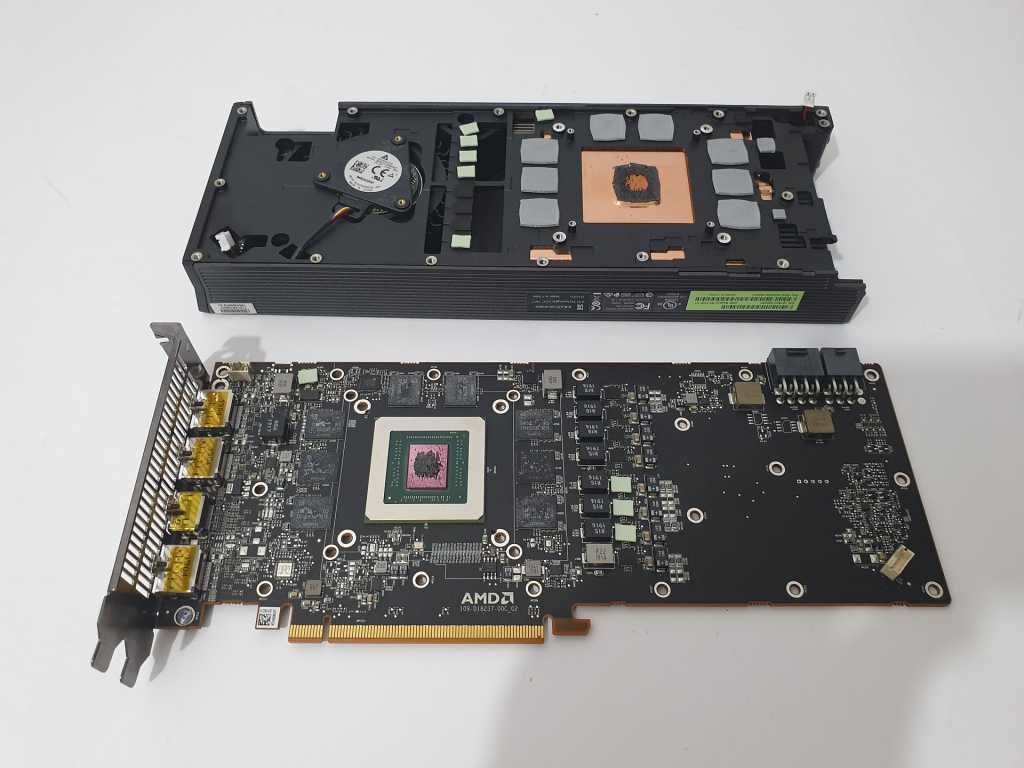 The cooling of these graphics cards is actually a copper vapor chamber with liquid in it. The same compartment is connected to aluminum fans using the fan to diffuse the heat. 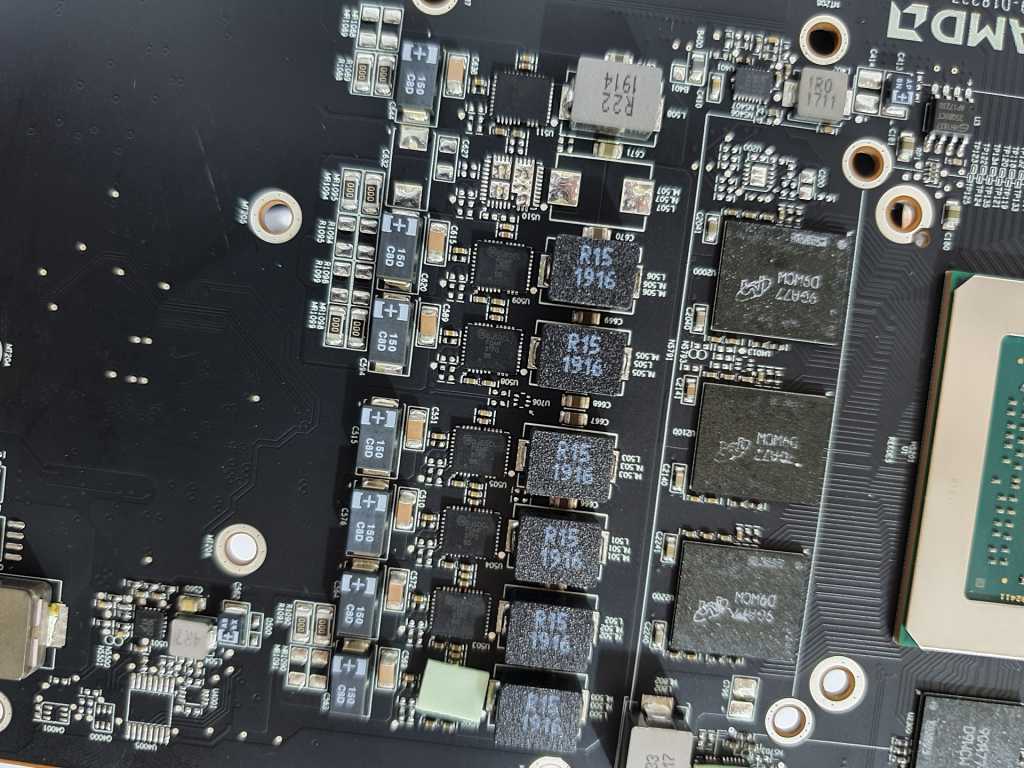 This is how the power supply system looks to the graphics core and the "GDDR6, Where the only difference between the two graphics cards is that the core of the XT gets 7 steps while that of the standard version in 6 steps only. There is one step to graphical memory.

These are On Semiconductor's FDMF3170 voltage stabilizers and are the most advanced intelligent power stages manufactured in the world today. They have temperature, voltage and power control at the highest levels. The maximum current that each step can provide is 70A, so there is no problem at all with the use of six or seven of these in the cards AMD To provide power to the core, a very easy task.

Where are the third party versions of Booty makers?

At this time, there are no third-party versions of video card makers based on the Navi chip. We do not have specific information about the subject, but we very much hope that by the end of August we will be able to see the same versions that will help get the most potential out of Navi. We're talking about versions such as Ausus Gigabyte, or MSI Gaming X, for example, which often have advanced, fast shakes right from the factory. As of now, all available Radeon RX 5700 versions will be based on the default design of AMD Which you see here.

It's time for us to take the performance tests on the next page and understand where it stands today AMD Facing tough competition.