Preparing for the new video cards AMD Comes along with the re-preparation of our testing system. We use many of these components, but we have re-installed with a fresh system of Windows 10 version of 1903 and all latest updates.

The system of exams and graphics cards remains based on thecore i9 9900K, which today brings leading performance in graphics tests and is not a bottleneck for the most advanced video cards on the market. This processor works at the default frequency with the MCE feature that speeds the processor automatically by load on a motherboard Gigabyte Z390 Aorus Pro.

All the video cards examined are samples that we have already tested on the site, and we have ensured that their operating frequencies will remain as close as possible to the lowest ones by definition NVIDIA. There is not one card running at much higher frequencies than the basic versions. 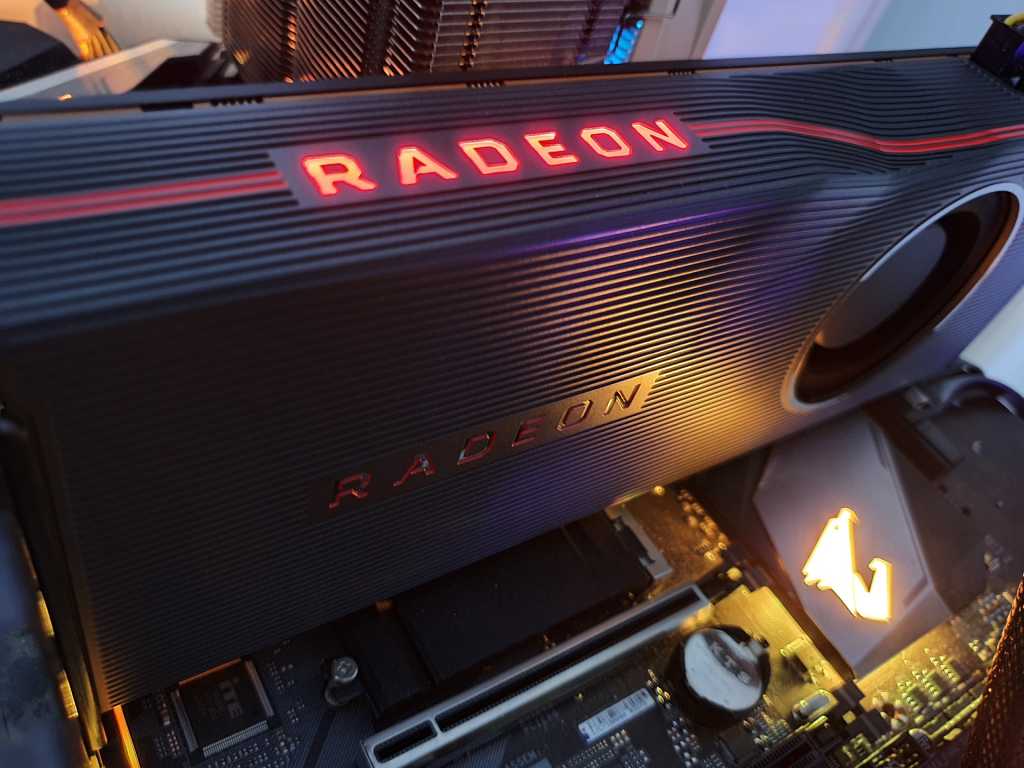 We examined the various games in two different resolutions, which are considered widespread, and especially for the type of hardware in the audit. Family cards Radeon RX 5700 Braids the line between FullHD 1920 × 1080 in maximum settings and WQHD 2560 × 1440 in maximum settings. Of course it depends on the game.

In these tests we did not include the new RTX Super cards NVIDIA For logistical reasons, but be sure to cover third-party versions as they launch and become relevant. Remember - default versions are designed to serve as a minimum of acceptable quality for video cards and third-party versions that enhance this in every possible aspect, even in performance. This note is also relevant toRadeon RX 5700 XT and brother are being tested here. 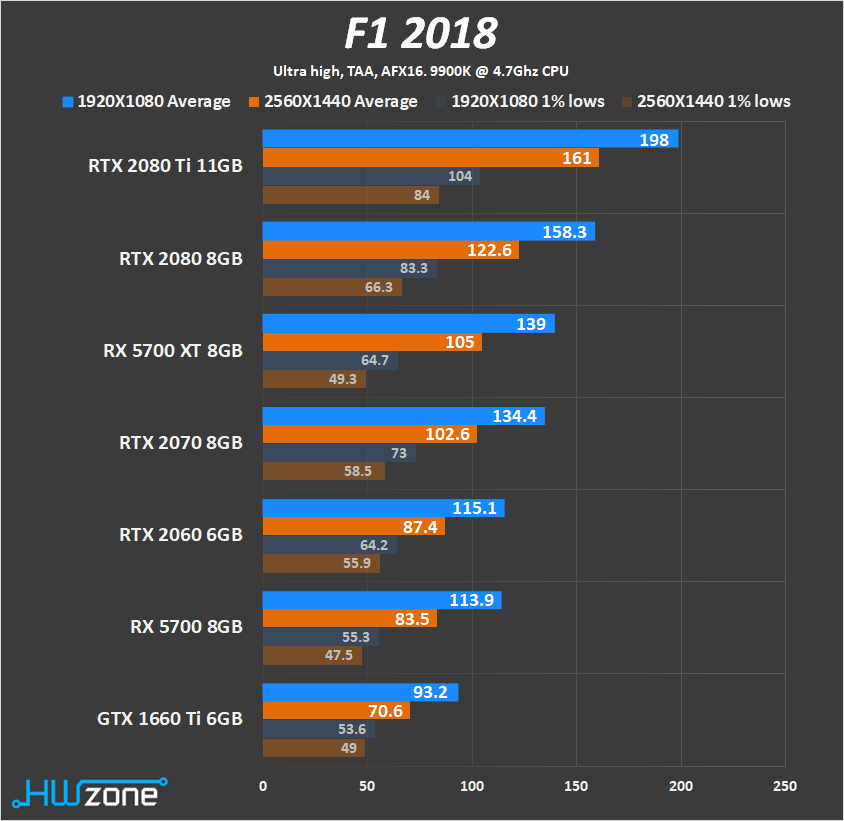 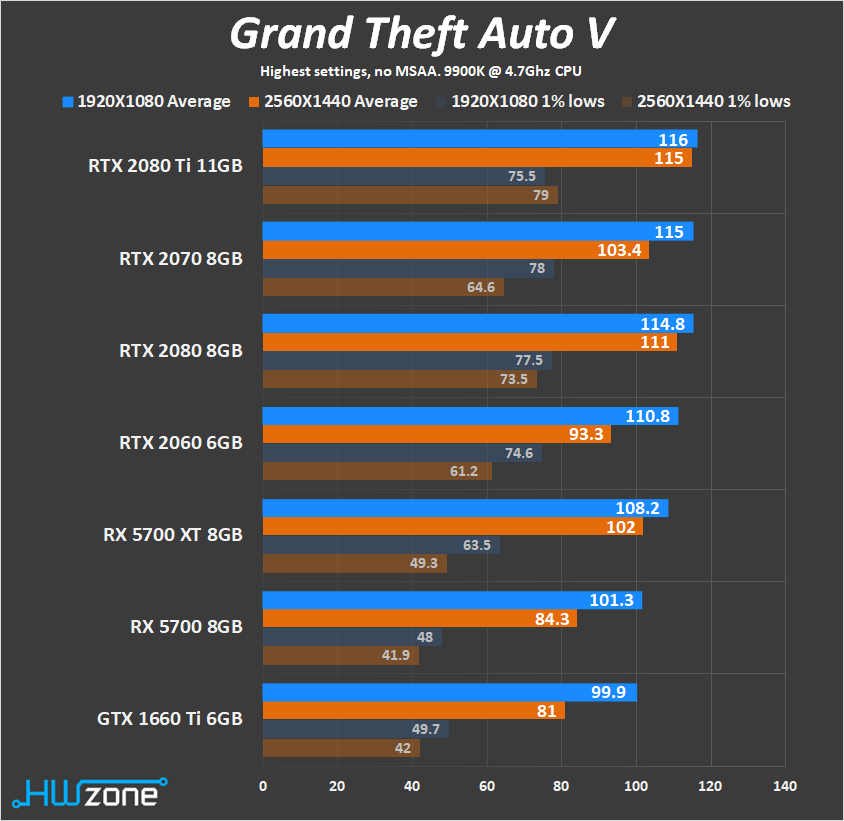 The GTA V game is in many terms and has been an outdated and technical game. The engine was built many years ago and the level of graphics is not exactly ahead of technology. We decided to test it because of its popularity even today, years after its release. In this game performance cards Radeon There were never any leads, and here there is no real difference. It is possible to enjoy with the new 5700 series without a problem, for their performance fall even from those of RTX 2060 which can be purchased at a cheaper cost than both. 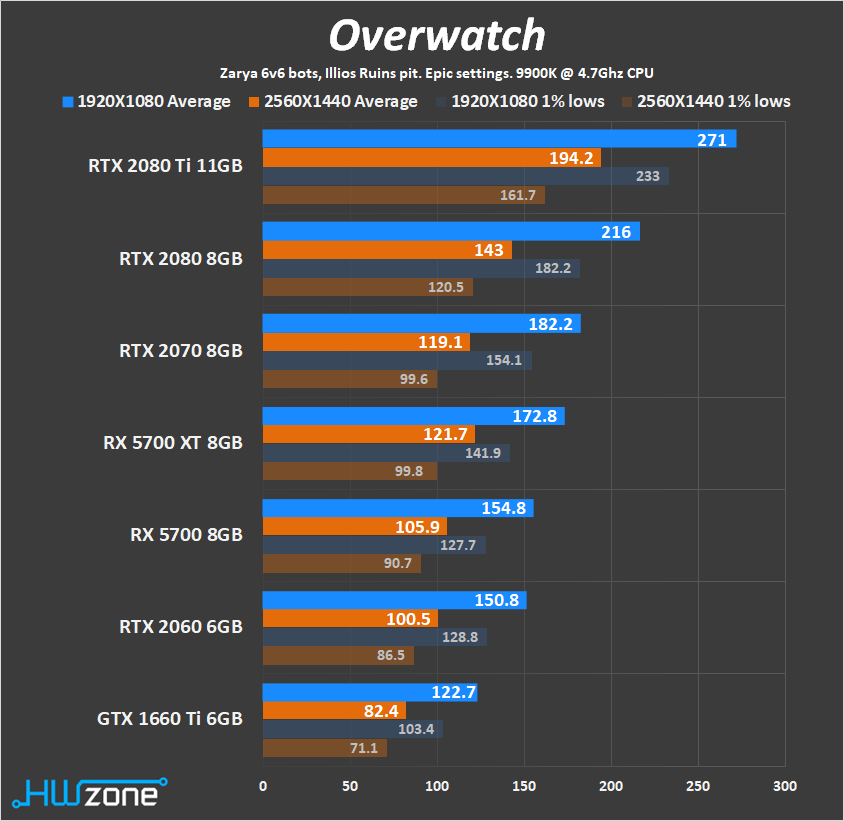 Switch to a bit of electronic sports - Overwatch. This game is also known for its fondness for video cards NVIDIA But here I got a pleasant surprise from the new video cards from AMD. The resolution of 1440P displays 5700 RX XT superiority over RTX 2070 when 1080P is slightly below it. The 5700 leads in both resolutions RTX 2060. 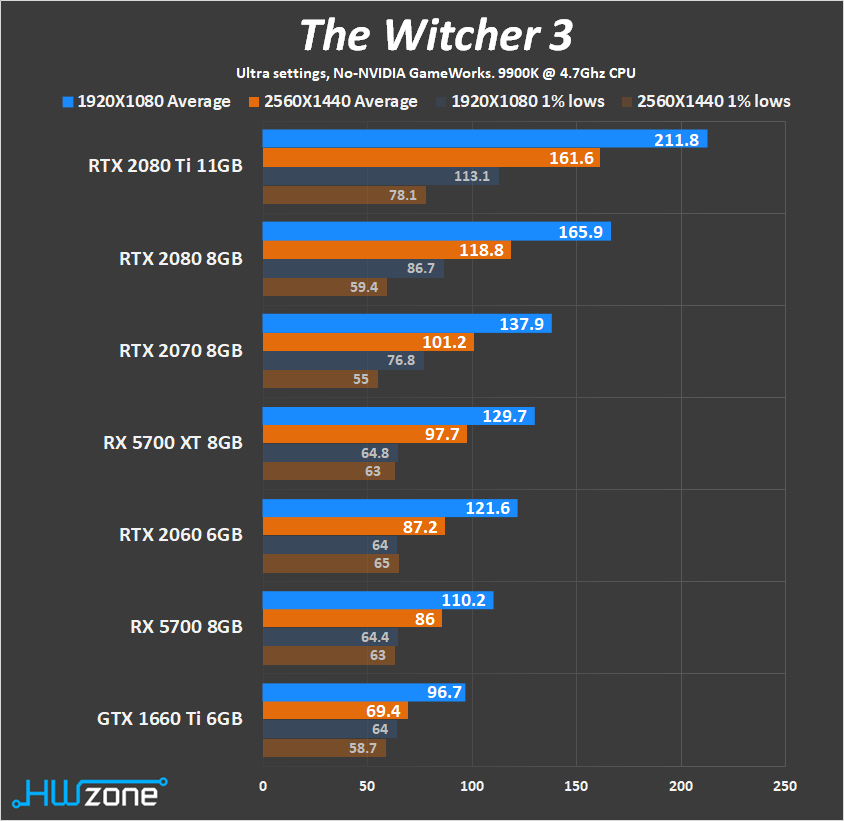 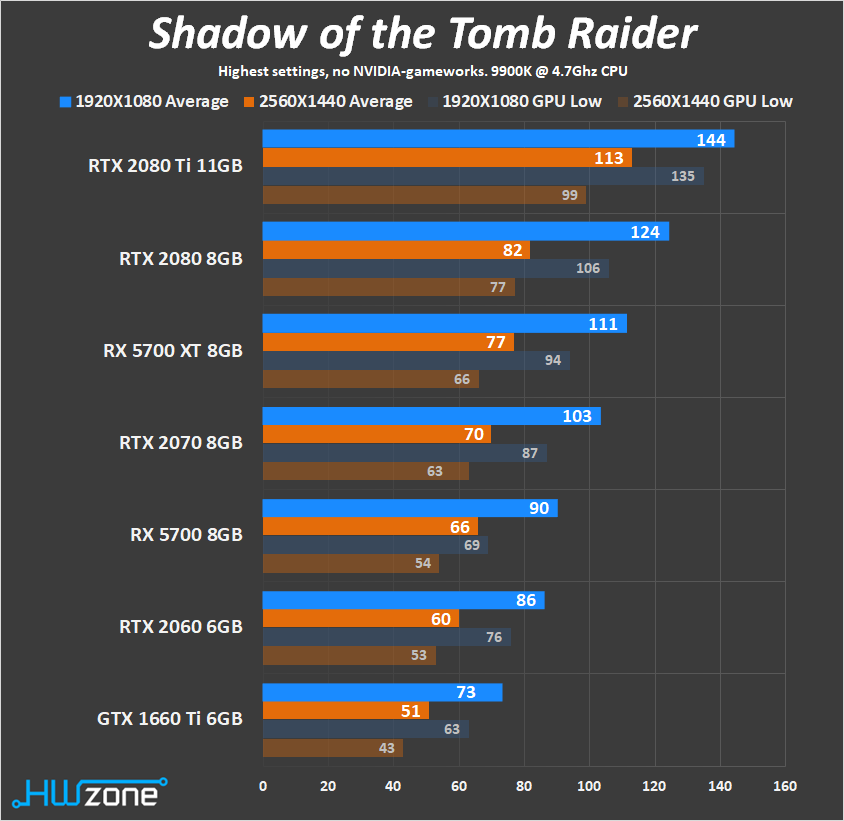 In the Shadow of the Tomb Raider game,Radeon Demonstrate superiority over the RTX from the other side, when 5700 RX XT displays Performence The highest in 10% over RTX 2070. Impressive, given that this is a game rich in advanced visual effects and details that take the hardware to the edge. 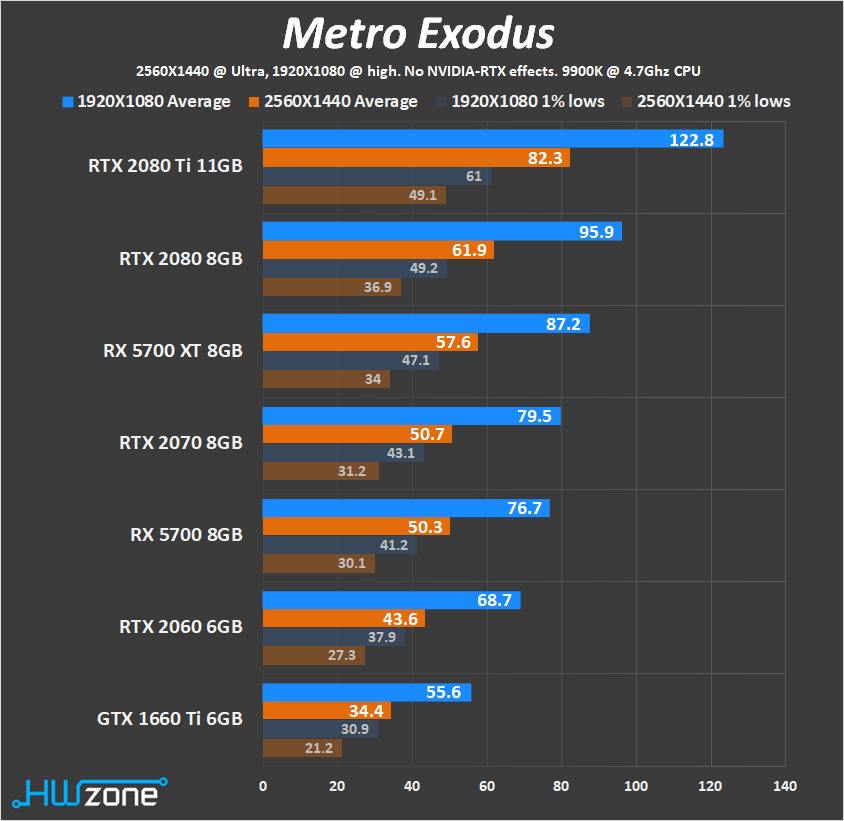 The new Metro game also seems to be the territory of AMD, despite the collaboration with NVIDIA About its Ray Tracing features. Of course, the option is canceled on both sides to allow Performence Worthy and fair comparison. In this game, the performance of RX and 5700 RTX 2070 are the same under 1440P. The 5700 XT RX is close to performance RTX 2080 which is very impressive. 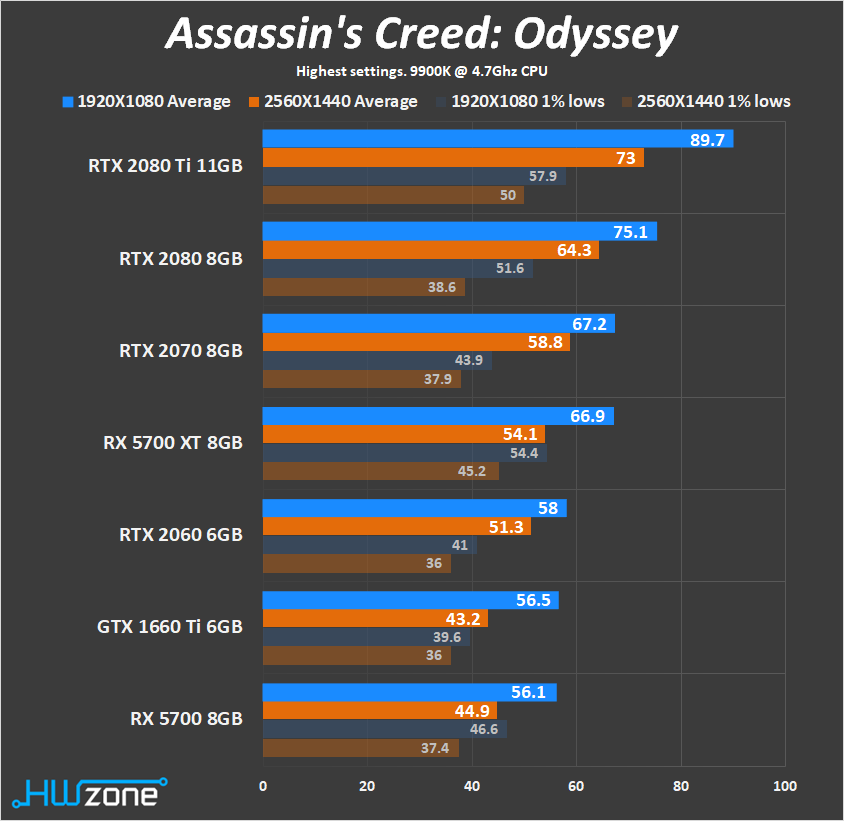 As of yesterday, the new Radeon performance was a bit tricky and full of tricks in this title, but a new driver who came right in time arranged them in AC: Odyssey. However, this is not a game that particularly compliments cards AMD And here is the 5700 RX displays Performence Similar to GTX 1660 Ti where the XT is averaged between RTX 2060-to-RTX 2070. Admittedly, the minimum number of frames per second experienced with the XT is very good, and it provides a smoother gaming experience because of that - so you can say that it is somewhat better thanRTX 2070 in this title. 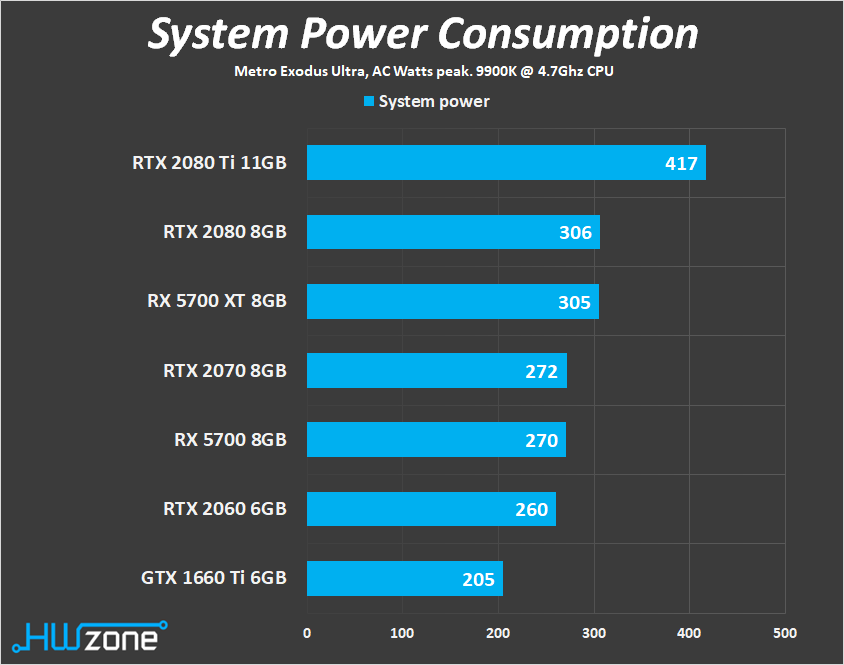 Here is the power of the test system when measured from the AC wall outlet. The measurement was taken during the Metro Exodus test and refers to the highest value in the meter. There is something important to note when it comes to power consumption of a system and how to refer to data.

Some test the power consumption of the video card only to estimate the ratio between it and other video cards. So you can know how effective a particular video card is compared to another. Indeed, there is another statistic that is very important to know, especially today in the era Processors Multicore - As a video card generates more frames per second, it will increase the power consumption of the entire system accordingly. The processor, which today is a serious secondary need for video cards, and sometimes even the main power in the system, is the one that goes into high gear with the number of frames per second that it needs to push higher than the lower one.

I'll give you a hypothetical example - suppose we take an 9900K-based system, a processor that is definitely power hungry. We put RX 580 there and take metrics, we reached 250W of power while examining. We are now installing RTX 2060, a lower consumption card, and suddenly after taking measurements we see that the electricity consumption remains similar, 250W as well. How? Well, with the power consumption of 9900K and the addition of frames per second to Render, the extra load adds power to the system, so that even though we use a more efficient video card, we reach similar overall consumption.

When it comes to power efficiency and performance, Navi delivers the goods. This is not particularly exciting data against Turing's architecture NVIDIA Based on the older 12 nanometer procedure, but we certainly see a significant improvement in efficiency that will enable Development Of competitive products in the future.

The war on the consumer's pocket starts at a price

AMD sends new soldiers to the battlefield where the control of NVIDIA And she seemed to know this time. Family Turing It is made of powerful, polished and mostly inexpensive video cards.

Although this is a standard default model, without overclocking and advanced casing,Radeon RX 5700 XT can give a FIGHT-RTX 2070, a popular video card thanks to the ratio of its performance to the relative relative cost compared to its older siblings.

There are some events that have happened in recent weeks in the world of graphics cards in this segment of 300-500 dollars. The first event was the announcement of the RX 5700 family that happened at E3 together with the launch date (today). The price? 450 USD, 50 less than RTX 2070 together with promise to be as fast as at least. Then NVIDIA In response she released the RTX Super recently updated in default versions to say "we prevented potential risk".

Surprisingly, even before the Radeon RX 5700 cards were launched, AMD decided to keep them protected And lowered their price to the current launch price of 400 for the XT and 350 models for the standard model, Which are a decrease of 50 dollars and 30 dollars respectively.

As a result, the two companies send completely different models to compete in each other. As a model slightly below standard RTX 2070, the RTX 2060 Super at a price tag of 400 USD should now compete directly with the "Radeon RX 5700 XT, when the 50 dollars less than the X-Radeon The usual XXUMX Rx stood in front of theRTX 2060 standard.

If you ask me, I thinkRadeon RX 5700 should fall in price even less than 350 dollars to 330 dollars just to create a rational spacing between him and his big brother, while intimidating RTX The usual 2060 is slightly stronger. The way is not to leave users in doubt about which product is better for their money when it comes to game performance. Victory must be convincing.

I do not want to delve too deeply into the product of this competition because I think it's too early to sum things up, and here are some good reasons to think this way:

The drivers for a new architecture like Navi are relatively early. I learned that in the near future versions will come out that will improve the user experience and probably the performance of the products, as the drivers for new architecture always do. In addition, it is a bit difficult to judge when the only thing available in the market is default versions in self-design. I need tickets to be found on the store shelves and will have advanced refinements and possibilities The fast, from both sides. 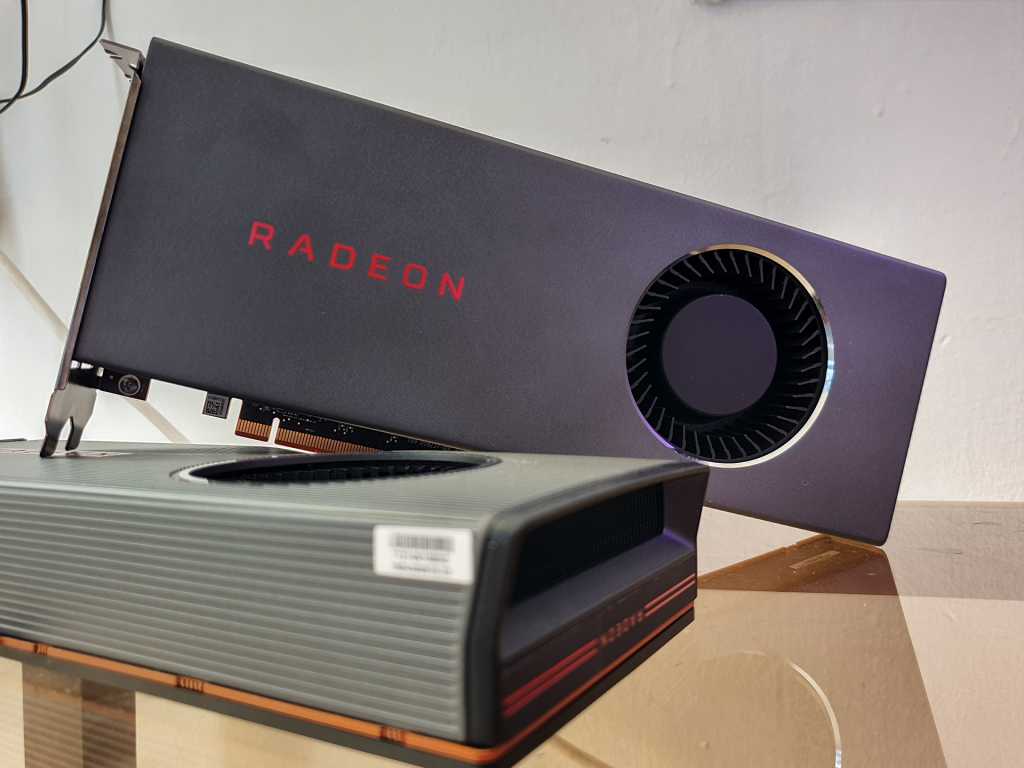 The smoke in my opinion has not yet spread, but you can safely say that Radeon RX 5700 XT is not in danger of survival as many thought, not if AMD Hurry up to update the driver and the various manufacturers will start attacking the market with their versions. AMD Should remain in focus, keep up to date and keep a finger on the pulse, while ensuring that there are plenty of advanced versions and that the card keeps the upper hand against the tough competition.

Little brother watering pairs graphic cards I always thought it was because he was very accessible and therefore appealed to a large audience. Here I see a little problem with a very modest and minimal difference in the price tag against his older brother. 50 A dollar between 350 and 400 is not going to make a lot of users choose the RX 5700 over the XT model, with the average performance difference between them not small and can sometimes exceed 12% or more. I'd love to see another small touch of the price of the RX 5700 down.

What happens now as a result of all these changes is that the gamer gets more value for his budget. If until recently a budget of less than 2000 shekels promised RTX 2060, now it can guarantee tickets like Radeon RX 5700 XT.

To the question "Lior, NIS 1800 - Radeon RX 5700 or XT Geforce "RTX 2060 Super?" So there is another kind of evolution that these products have to do to get kosher to the plate ... or the interfacePCI-Express.

We will, of course, update reviews of the new products and the many versions that will be sold here in Israel later this summer. I'll end with a question for our readers - are some of you who have so far only used video cards from NVIDIA And considering switching to AMD? How well the performance tests convince you that the Radeon RX 5700 XT and the Radeon RX 5700 are the winning products thatAMD Need a fight for the heart of the gamer in this critical hit market of 300-500 dollars? We'd love to hear your comments.


Wait, there's more!
Join To the group of zon And you can receive exclusive updates on various offers on the net, share content that you find interesting, consult with members of the site, and more - Join now!
Tags
NVIDIA AMD Radeon Geforce ships RTX
Share
Facebook Twitter LinkedIn WhatsApp Telegram