NVIDIA's show: monstrous processing, HDR technology and you can replace the graphics cards

The big event of the chip developer did not provide us with the "GeForce The dreadful one we had expected, but it did provide us with many other reasons to be excited and interested

NVIDIA has in recent years become much more than a developer of graphics cores, with diverse technology and research businesses gaining momentum, computing products that it markets directly to customers and also revenue and stock value that continue to grow at a rapid pace. Because of all this, it's not hard to understand why the company's media events from Santa Monica are also becoming increasingly important - and this is something that has reached its peak right now, at the CES 2017 show. 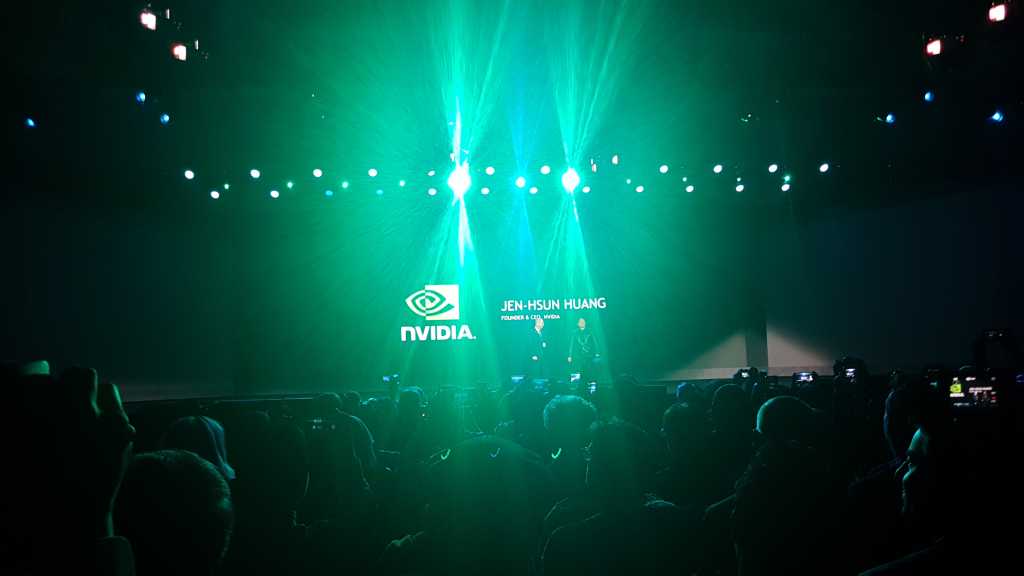 Artificial intelligence is the secret

Whoever took the stage to lead the event was as always Jen-sun Huang, the founder, president, CEO and probably also the company's most recognizable face - who took advantage of the first few minutes to present a video that reminded us of some of the incredible achievements made possible by developments In the world of artificial intelligence, an area in which society has a significant foothold in the categories of supercomputers, the distributed and online cloud system, robotics, deep computational learning and more. 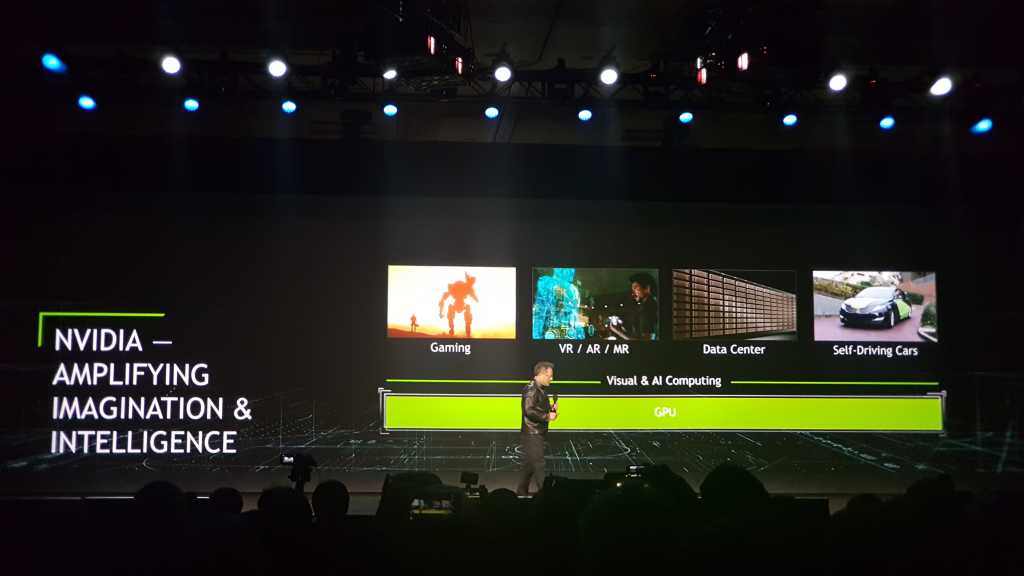 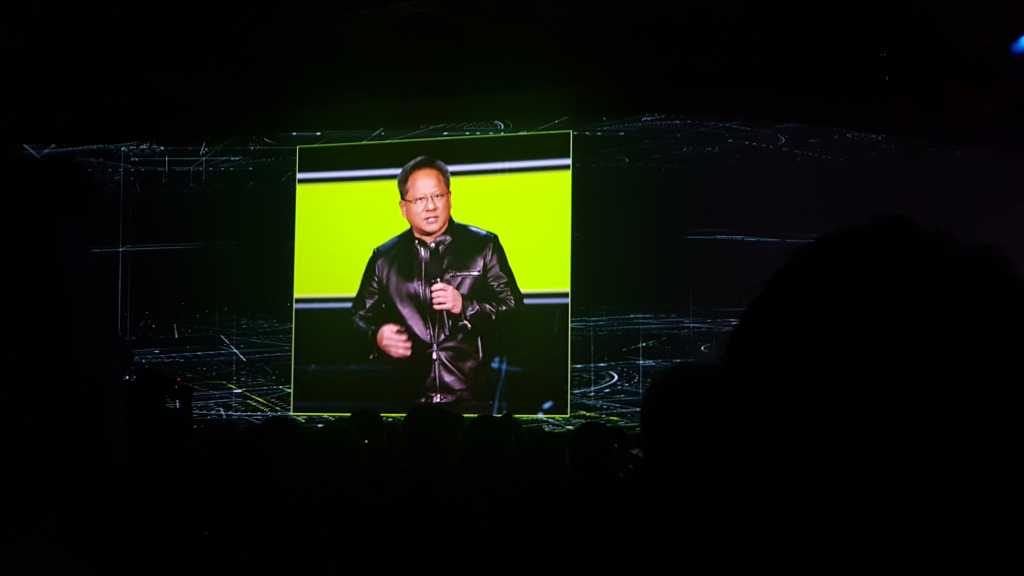 The CEO went on to state that a crucial part of the computing breakthroughs we have encountered in recent years comes from one main reason - the entry of GPU technologies, the graphics processing cores based on extensive parallel computing, into the world of high-performance computing. NVIDIA, As we know, was the original leader of the move with the creation of the CUDA architecture and language for its products, somewhere in 2007. 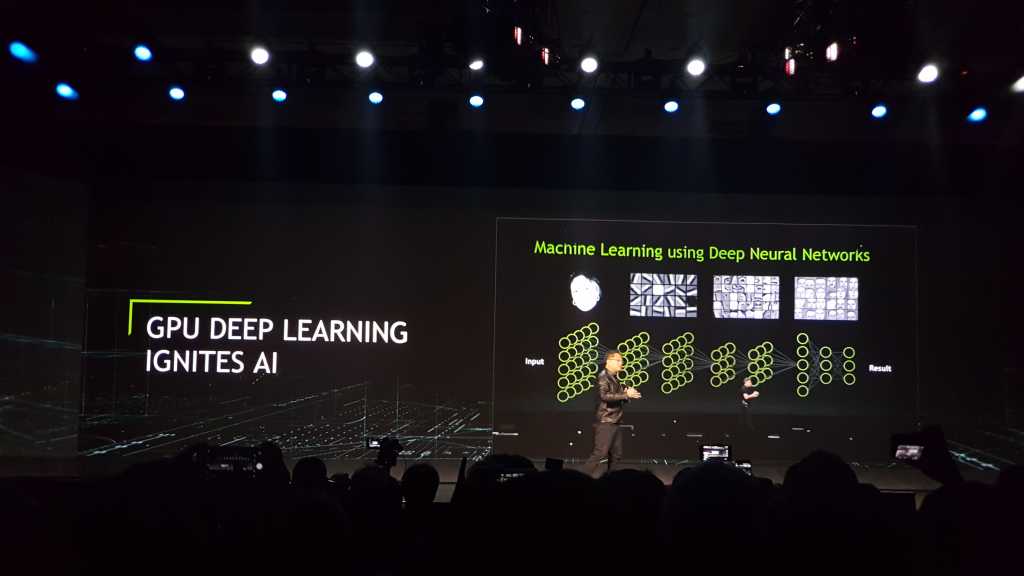 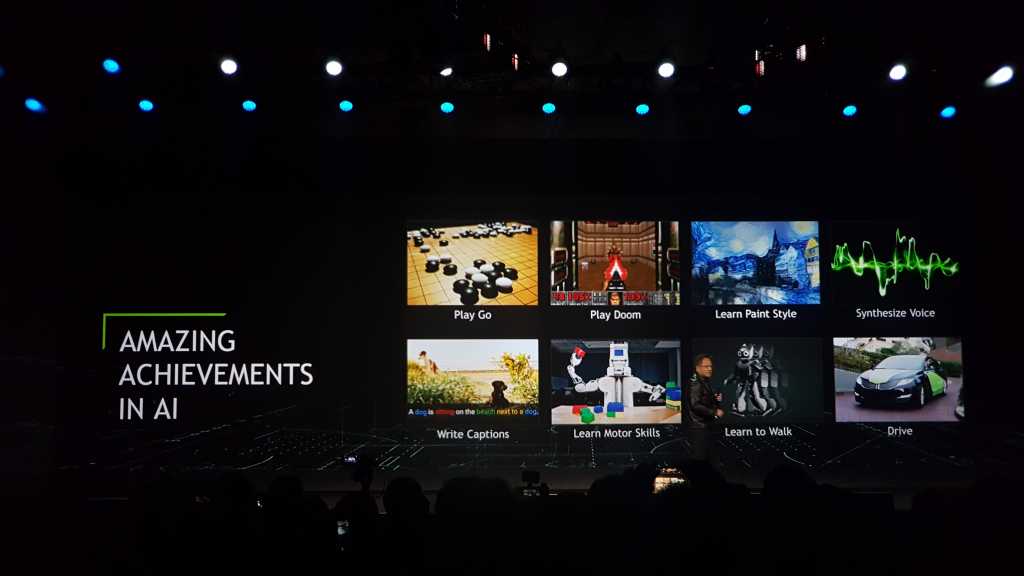 From the world of science we have made a sharp turn to the gaming universe, which has also enjoyed a real renaissance during this period - doubling the total revenue over the past five years, and popularity that only continues to grow with hundreds of millions of game enthusiasts around the globe. , The software and of course the hardware, is the leading platform in the field, with more than 200 million players. Another interesting statistic - streaming of games Video The network has become an industry that transmits about 5 billion a year, with about 600 million viewers for the various platforms. Pretty crazy for a rather surprising trend just born a few years ago. 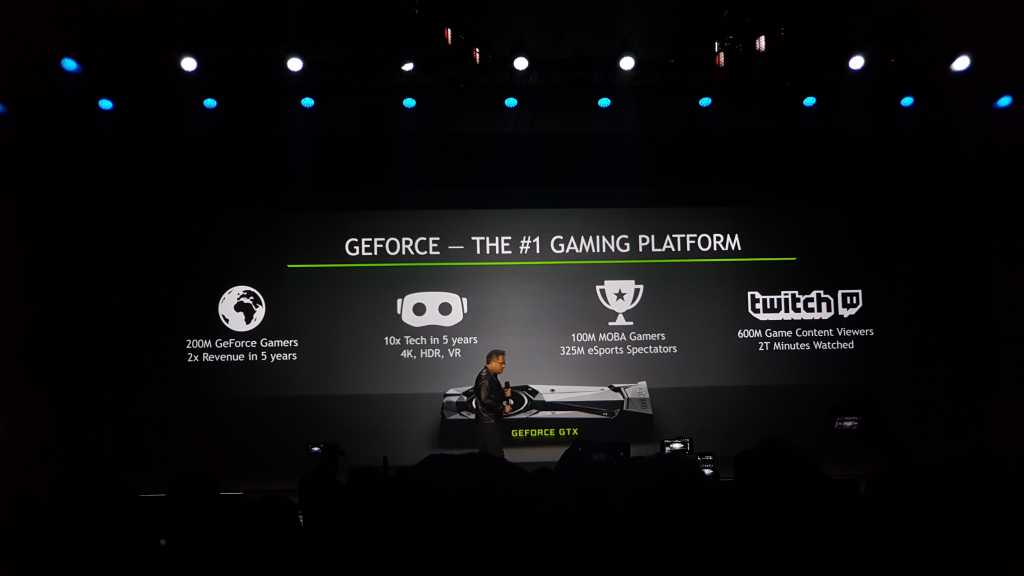 With such a large number of potential customers, it is not surprising to find that the company hopes to leverage them to further improve their popularity, with a new ability to connect the personal GeForce Experience account to users' Facebook account with just two clicks - and a "bonus" in the form of a screenshot or Record video using Google's dedicated software NVIDIA Directly to your social network account.

After all these introductions, the entry has reached high gear and a shift from achievements so far to the present and future - with a new gameplay video for Mass Effect: Andromeda very impressive, plus the unveiling of the long-awaited launch date: March 21, 2017, closer than we thought, actually!

Technology that can double the number of gamers in the world?

Immediately after the demo video played based on a card GeForce GTX 1080 came the company's first real bomb: with all due respect to 200 million users GeForce Which apparently have systems adapted to modern gaming, there are about one billion computers in all corners of the world that do not include hardware that is strong enough to run games properly, and the company believes that they found the solution to enable a whole new world of content.

NVIDIA has officially announced its upgraded GeForce Now service, which will provide direct streaming services for gaming for a variety of systems that are not powerful enough to support it locally: Content processing will be done on powerful remote servers, and the product will be sent to the user with minimal real-time latency. The streaming of the game Rise of the Tomb Raider from the Steam platform on a simple laptop and also on an iMac running OS X's system was demonstrated on stage. Dark, At a quality that seemed appropriate and at a reasonable time.

NVIDIA plans to offer the service as a time-limited registration - $ 25 will give you 20 hours of play in standard video quality, or a little less hours if you choose maximum visual quality, when you will also need the titles themselves from the various stores as you would on your physical PC. It's definitely not cheap, but it may wink at casual gamers who want to play one new game or several new games without upgrading hardware worth thousands of shekels - and now we can only hope that inNVIDIA Will be able to establish an infrastructure that will be available and will provide timely access to all users around the world, including here in Israel, and not only in North America or Europe. If this mission succeeds, it will be a particularly significant one.

A cheap console HDR for everyone

After we were impressed by the cloud's capabilities, we went through the local processing capabilities with the company's new Shield, which will contain the same chip hardware Tegra X1 octagonal cores in a package reduced by about 40 percent compared to the original Shield console, with a new and improved design controller, Android Nougat straight out of the box and mainly support the flow Video Ultra HD and standard HDR From the video services of Netflix and Amazon - which does not exist in any other console and not even in personal computers.

The Shield will support the running of more than 1,000 games in the dedicated online store NVIDIA For her, and also in direct streaming of games from a personal computer in another new home - and also in streaming cloud Using theGeForce Now, of course, so this is a very interesting package, all the more so when it bears a price tag of 200 dollars, including the controller and remote control.

The existing Shield console will also be updated to the system Android Nougat and will be supported by all the capabilities of the new device, by the way, so that the proposal is for new customers and not for upgrading those who have already chosen the services of the company.

'Supplement' for the Shield console developed in conjunction with Google It is basically an online reception unit that connects directly to the socket and includes microphones with digital beam construction that can receive your commands remotely - so that you can receive information and control other smart devices in your home comfortably and from almost any point, with the kind help of the assistantGoogle Digital Assistant. 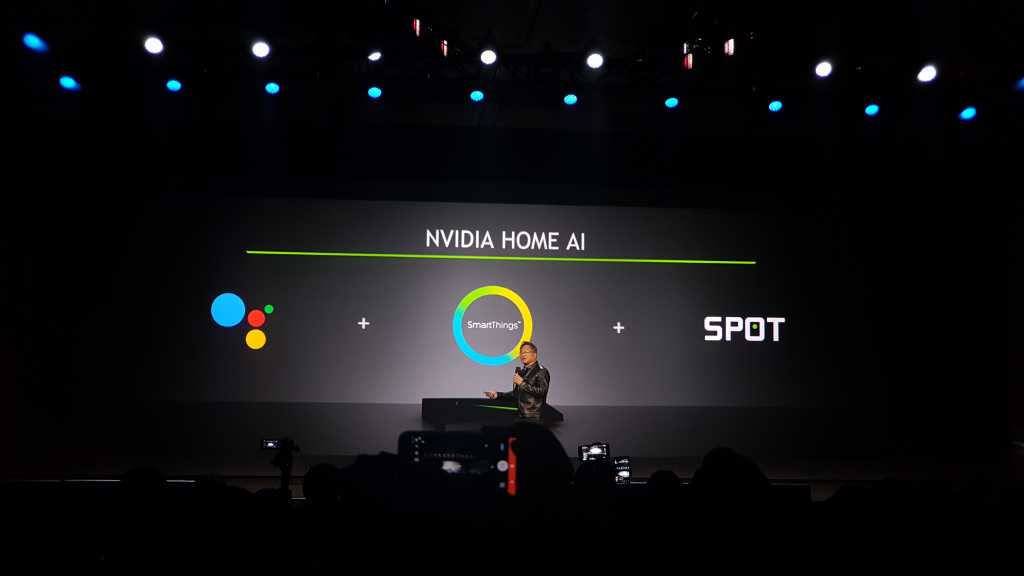 A glimpse into the next generation of cars, and of our graphics cards

The last and most central topic she spoke about NVIDIA At her event was, unsurprisingly - the automotive world, which has provided her with a variety of prestigious successes in recent years. Zhen-Sun Huang talked about the fact that the car industry is one of the largest in the whole world, with a value of about $ 10 trillion (!) Per year and also includes a great deal of waste, a waste that the smart car revolution and especially autonomous vehicles can minimize or perhaps even eliminate completely . 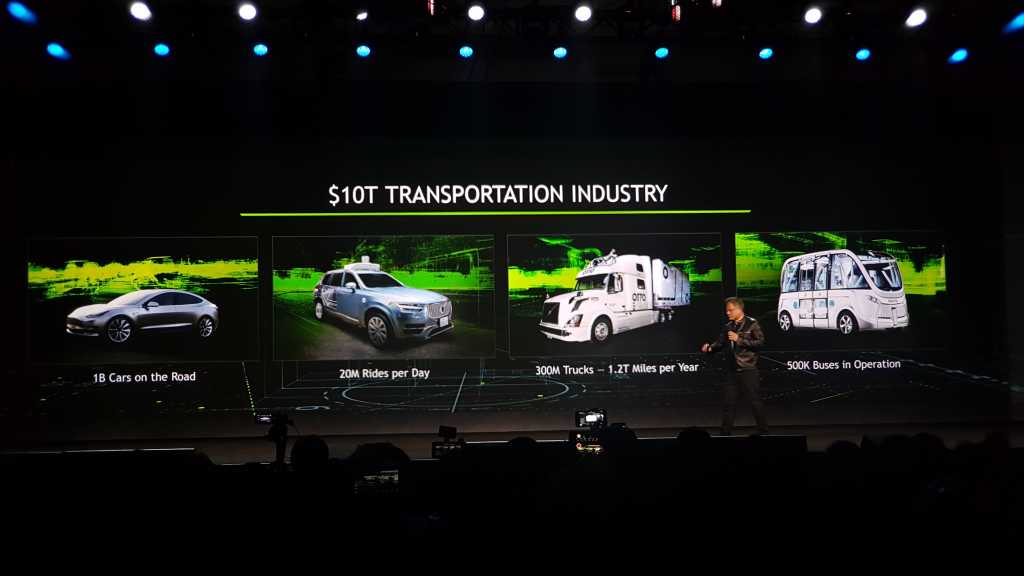 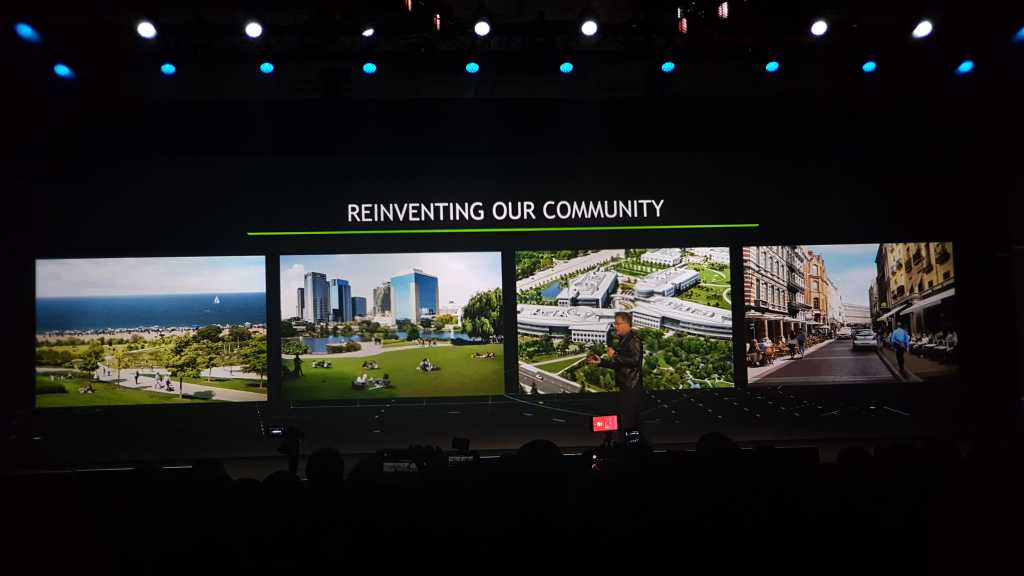 In this area too, machine learning technologies, especially deep computational learning, which can reach very high levels of self-study with intelligence, with minimal human intervention, are probably the key to the great revolution that is ostensibly just around the corner. 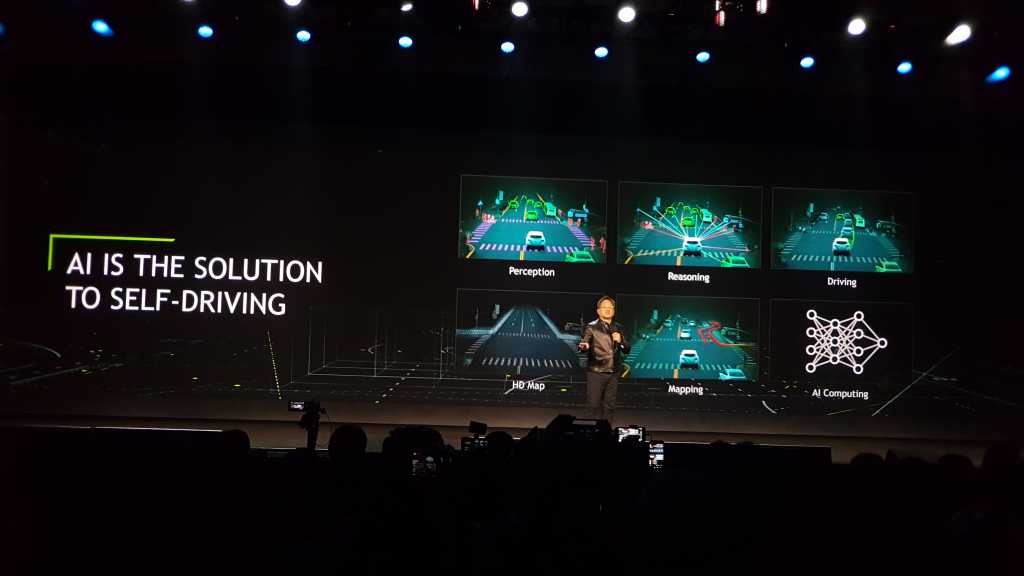 In order to ensure that it continues to stand at the cutting edge of the field, NVIDIA Wasted no time and unveiled her next car computer on stage - the Xavier platform, with seven billion transistors, eight processing cores in architecture ARM Dedicated (the next generation of its Denver cores?), Decoding capability Video In quality up to 8K and even Core Graphic based on 512 processing units from the XNUMXth generationVolta The future of the company, which is not yet available in any of its other products. All of this gives this new 'supercomputer' a performance that is about 50 percent higher than that of the company's current leading car computer, the Drive PX2, in significantly smaller dimensions and with a tiny power consumption of only 30 watts. 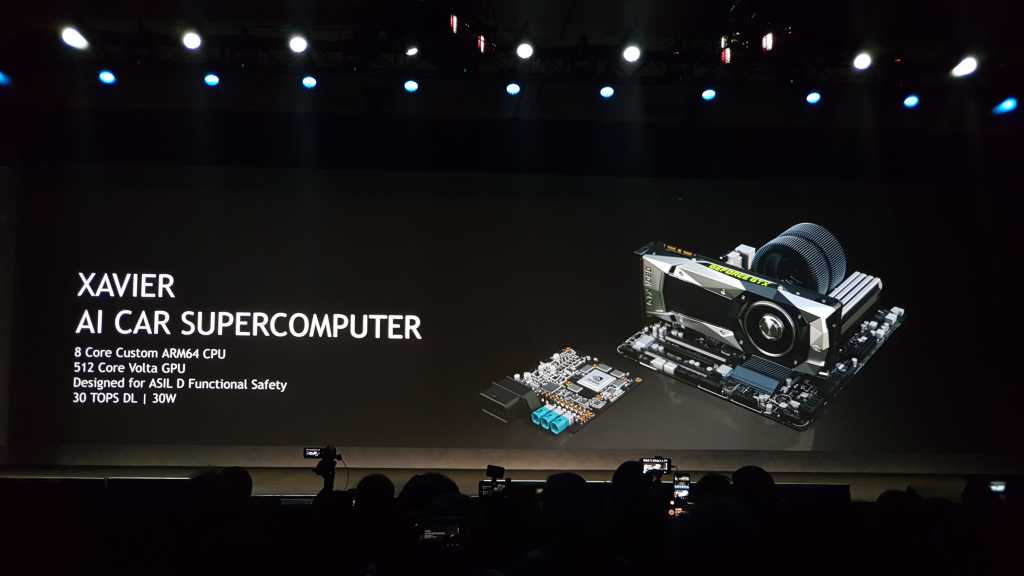 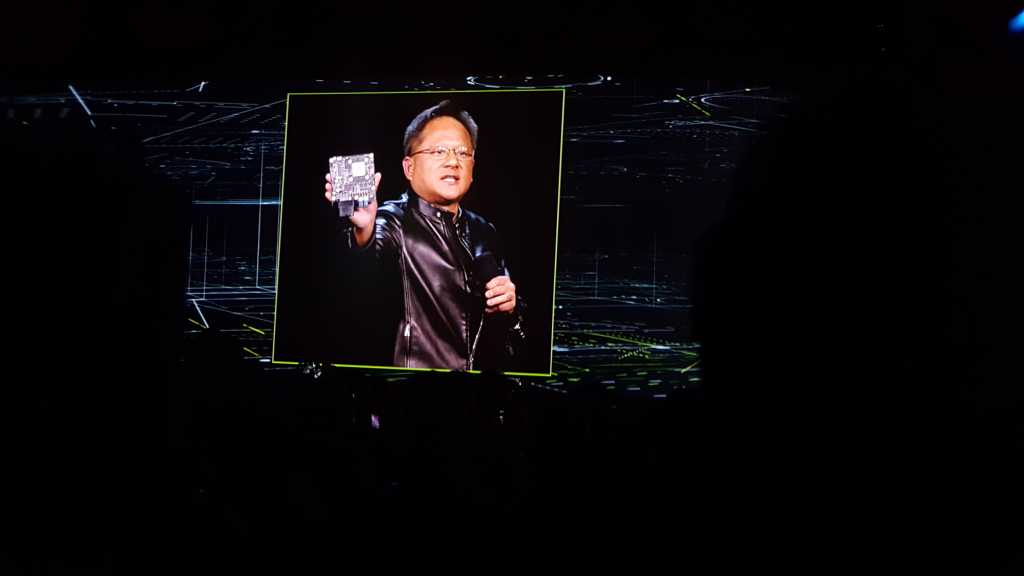 How do you demonstrate the capabilities of this futuristic processing unit? Building vehicle New autonomy of course - and this is what the company demonstrated in a video on stage, with documentation of the car that has earned the nickname BB8 and a presentation of the way it sees the world around it. The company states that vehicles based on Xavier computers will be able to drive autonomously from point to point almost anywhere in the world, including those without information - when the vehicle concludes that it is unsure of its operation on a particular axis it can choose to return control to the human driver.

A smart digital assistant inside your car

Along with vehicles that travel completely alone, the company decided to try and immerse itself in the world of smart technological aids for the human driver, in what is called AI Co-Pilot and feels a bit like the next generation of Mobilai - a system that monitors and processes the exterior and interior of the vehicle. And identifying objects and obstacles of all kinds of course. The system will be able to warn the driver of dangers that it detects in all angles and directions, make sure that the driver himself is in good driving condition and is not dangerously distracted, and will also be able to give advice regarding driving routes, locations and the like.

Sounds very interesting, especially if you belong to a group that does not really plan to give up the wheel for a computer owner artificial intelligence In the near future. 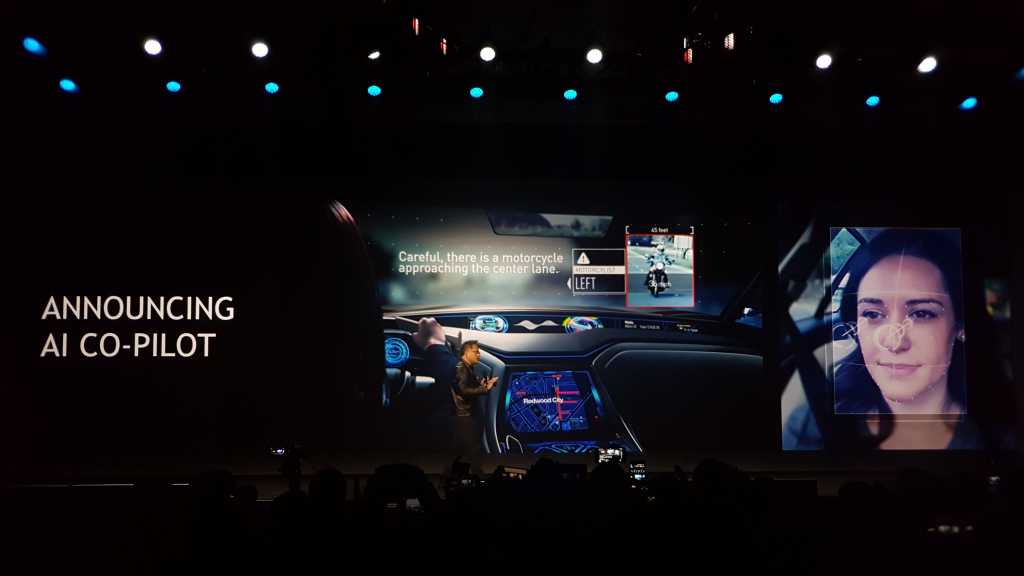 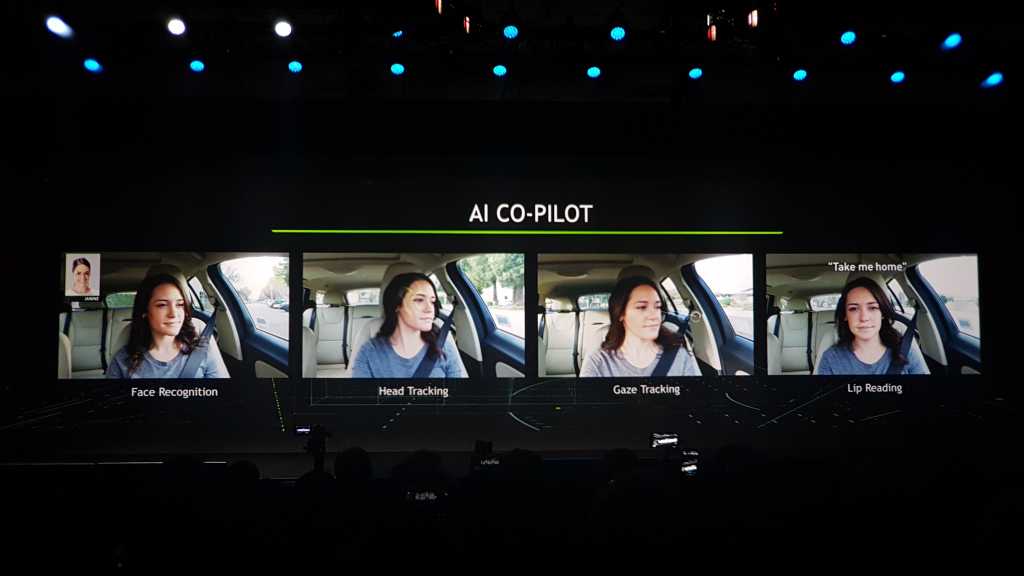 Finally, it was announced that Audi would be one of the first and central partners of the company NVIDIA For the integration of the artificial intelligence system in real commercial vehicles - with a statement that models with almost complete autonomy (Level 4, where it is defined that the driver is technically capable but does not need to intervene at all in the driving process) will reach the roads by 2020. Another prestigious agreement for the green chip developer. 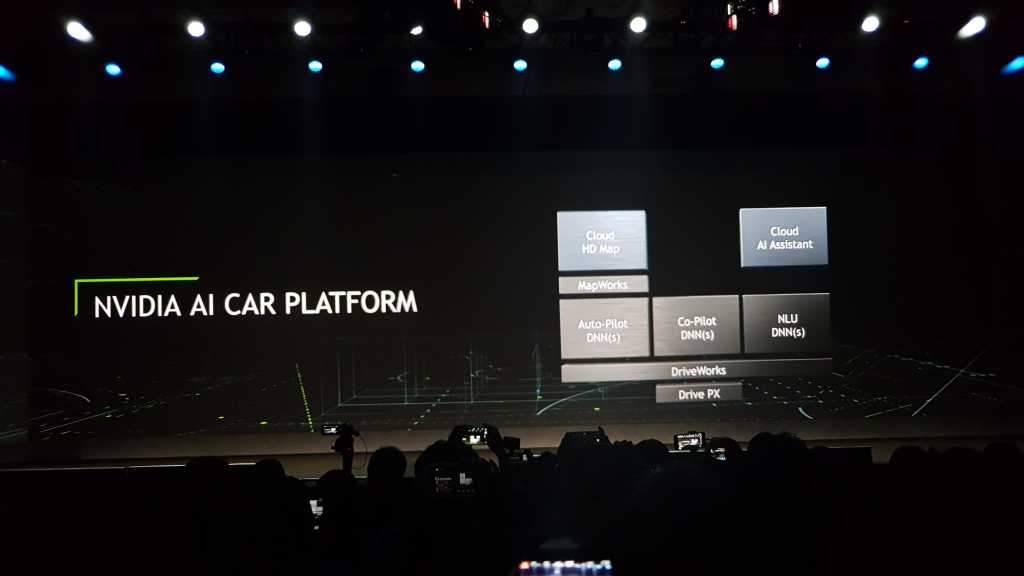 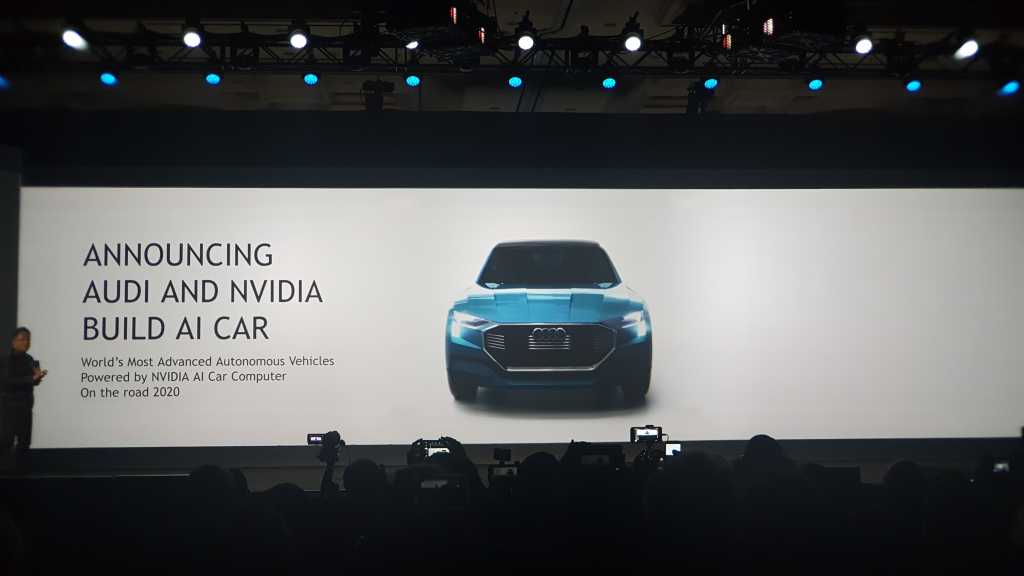 Where is the powerful home video card that the rumors promised us?

So we did not receive the announcement of the new GeForce GTX 1080 Ti card at this event - it will probably arrive a little later, probably at a separate event dedicated to the class, but we did receive some products and especially many important news for the future. Will this be the year in which the rise of NVIDIA Break new records? Soon we'll know. 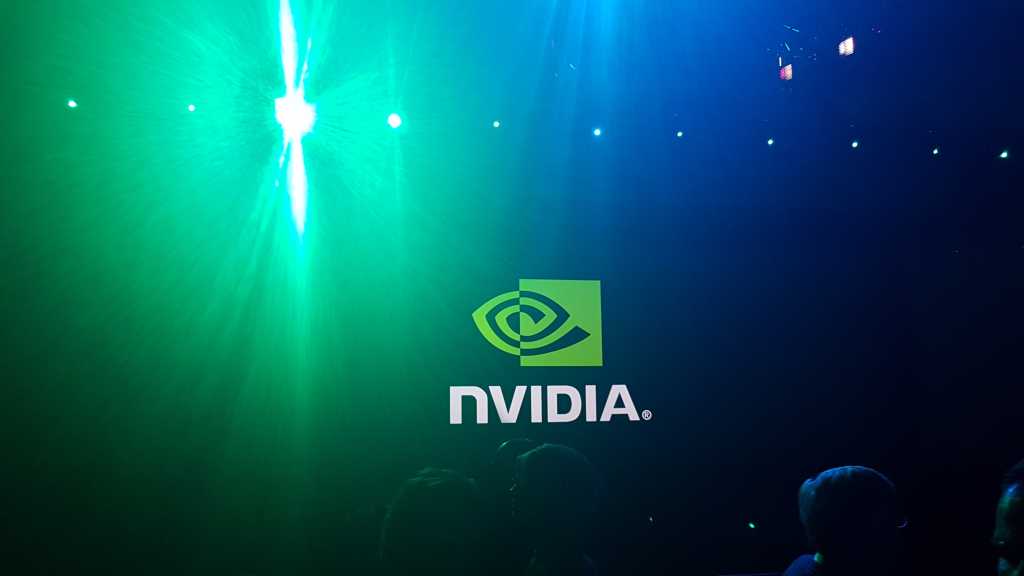