The chip giant has recently created great technology for computers Mobile, In a particularly advanced production process and we get a taste of what is expected to become public domain in the near future, with Technology Really advanced with a respectable number of improvements.

Tiger Lake is an architecture name Intel The most advanced as of today, and relates to processors manufactured in a process of 10 nanometers of Intel herself. Processors These at the time of writing these lines come in a configuration of 4 processing cores and 8 threads as well as 2 cores and 4 threads. The architecture is exclusively available for laptops under the 11th generation branding of Core.

This is in fact the most significant architectural leap of Intel For almost a decade, in fact since the leap from Nehalem processors of the beginning of the previous decade (Core first generation) to the Sandy Bridge generation (second generation of Core Known mostly for Core i5 2500K andCore i7 2600K) which was developed here in Israel, and was a leap in single core performance and operating frequency along with a significant jump in electrical efficiency. 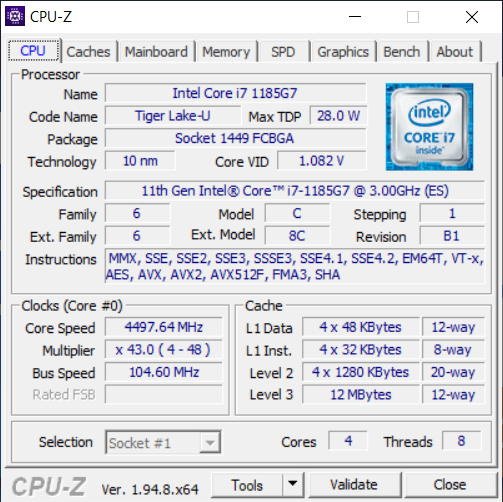 In addition to the enhanced processing cores she created Intel For Tiger Lake architecture, the graphic core also plays a major role. With the recent release of Intel Graphics Xe branding, worries Intel Push the processing graphics side beyond expectations and equip Tiger Lake with the fastest built-in graphics core to date. Xe 12th Gen, or the 12th generation of graphics Intel Present in full effect in G7 extension processors when there are some with 80 processing groups and some with 96. TheCore The i7 1185G7 as mentioned contains the fastest composition which is 96 processing sets at a frequency of 1.4GHz.

To Tiger Lake quantity זיכרון The highest cache we have seen so far from Intel for a 4-core processor, with each core getting 48KB from the first level and 1.28 MB from the second level. זיכרון The third-level shared cache is 12MB. This is an increase of 50% in quantity זיכרון The cache compared to previous generations, very impressive. 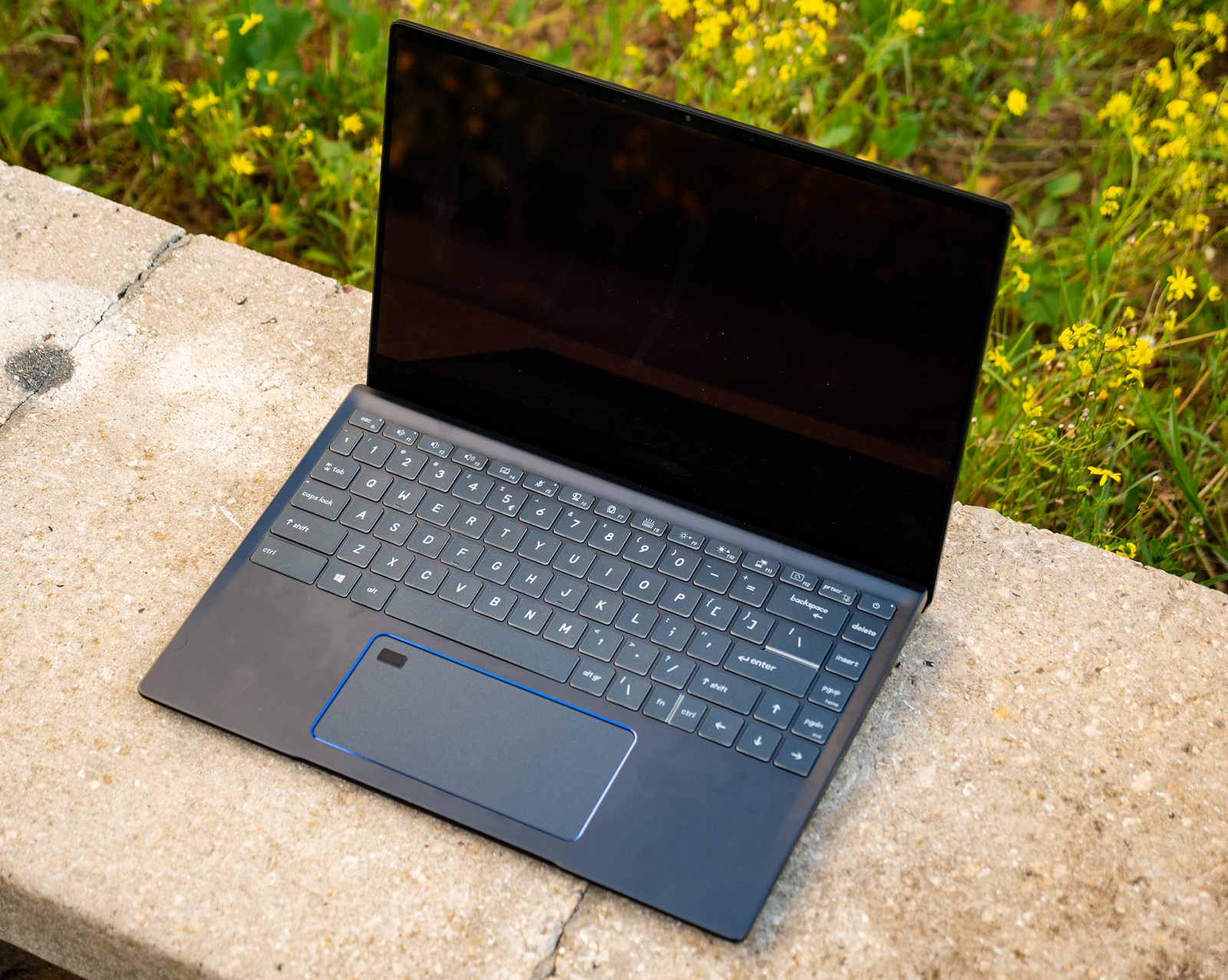 We received from Intel a computer made by MSI, intended mainly for examination and familiarity with the new platform. This is a computer Mobile Extremely light with a 13.3-inch touch screen and 1920X1080 resolution. The computer itself, by the way, is fantastic. Has a spacious and easy-to-type keyboard (more comfortable than 15.6-inch mobile keyboards we sometimes encounter) and a pampering touchpad along with a fingerprint reviewer. 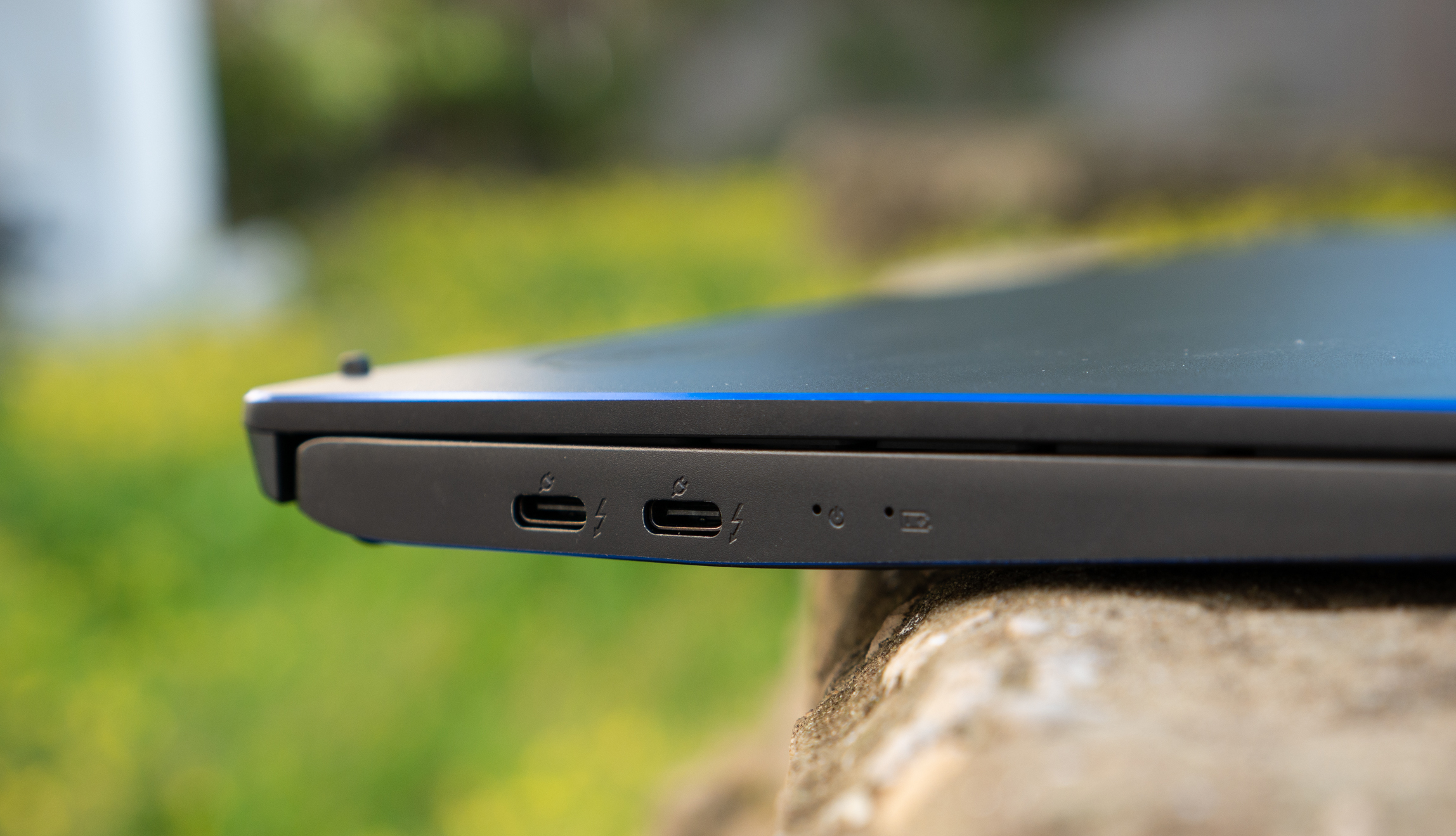 With a platform like Tiger Lake's Tiger Lake IntelIt is obvious that when you want computers Mobile Lightweight The amount of interfaces has been lowered. This computer has only two ports that are used for charging, external display and information transfer. 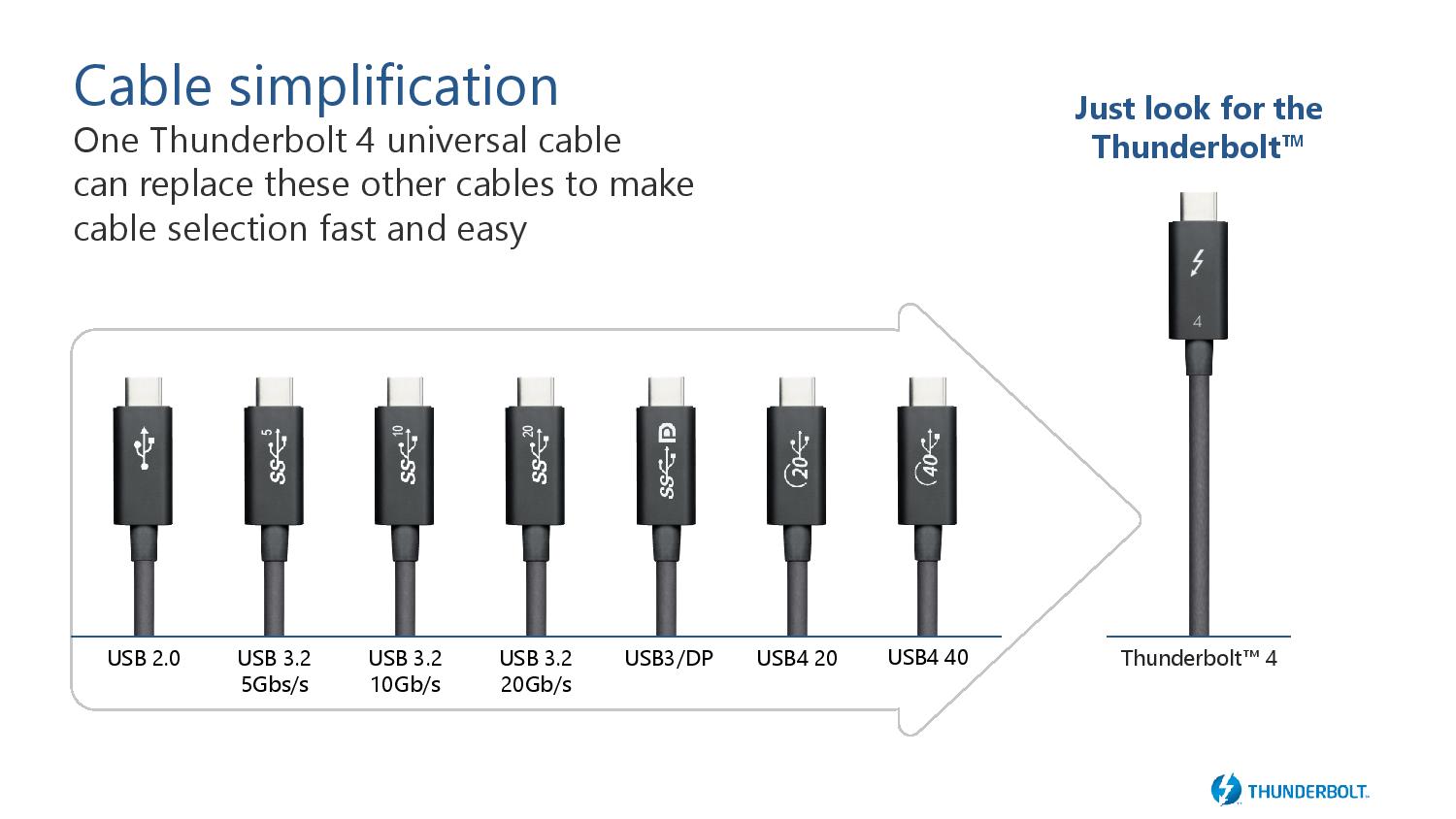 There is use of the interfaceThunderbolt The new 4, which is important to note that has speeds similar to the previous generation. With such a versatile and fast connection, any possible port use can be made that can be made of other types of ports such as wired network, audio and display transfer. The only problem is that having two such ports and a lot of peripheral connection means using a Docking Station, a product that aims to provide a wide range of connections over a single interface on the laptop. Here, we begin to lose a bit of the "mobility" effect of מחשב נייד. Still, no such thing has been used extensively on the roads. 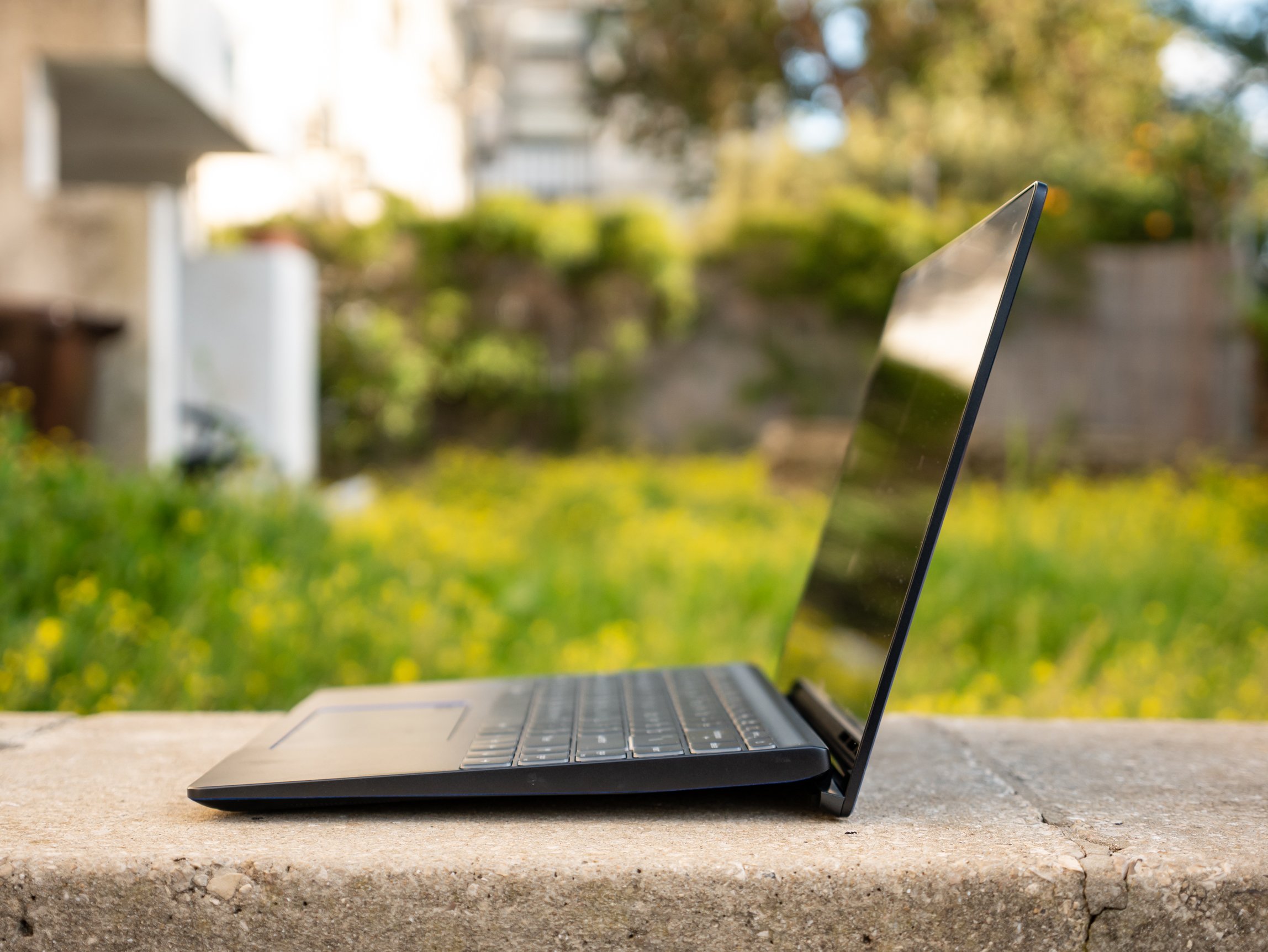 Such a laptop comes in a thickness of between very thin and "only thin", and that of MSI which demonstrates the Tiger Lake platform is not unusual. מחשב נייד It uses a fairly fast LPDDR4x 4266MHz system memory which is soldered to the board. On the one hand it is not possible to upgrade the memory volume which usually comes in a 16GB configuration, and on the other hand you enjoy tremendous speed and access times to the processor as the memory is soldered next to it. This also contributes significantly to the graphics capabilities as the graphics core uses it as the graphics memory. The heat envelope of this processor in the computer is set to 28W.

How fast is the Tiger Lake processor?

Of course the results speak for themselves, and are better than a thousand words so we went to perform some performance tests with this laptop to see how fast the CPU is. Unfortunately we do not have the Ice-Lake platform (Generation 10) or Cannon lake (Also 10th generation) but our comparison is mostly made against a stationary platform to gauge the power of this processor. 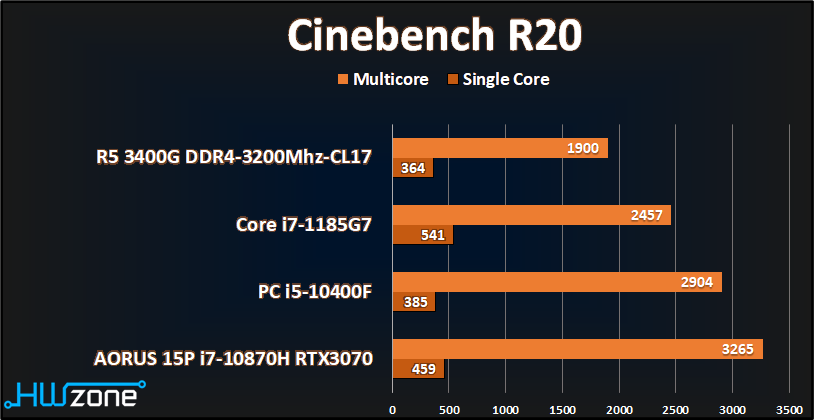 A lightweight laptop is not exactly a rendering machine, but we still decided to test its rendering capabilities using Cinebench. It is true that for only four processing cores, the 1185G7 is a very fast processor that breaks speed records for a single core in the mobile world. With a single core score of 541 it reminds us of desktop processors like Core i7 10700K or Ryzen 7 3700X. During rendering the processor does not significantly fall short of the speed of the Core i5 10400F which is a desktop processor with 6 cores from the current generation of Intel Which is based on architecture Previous. 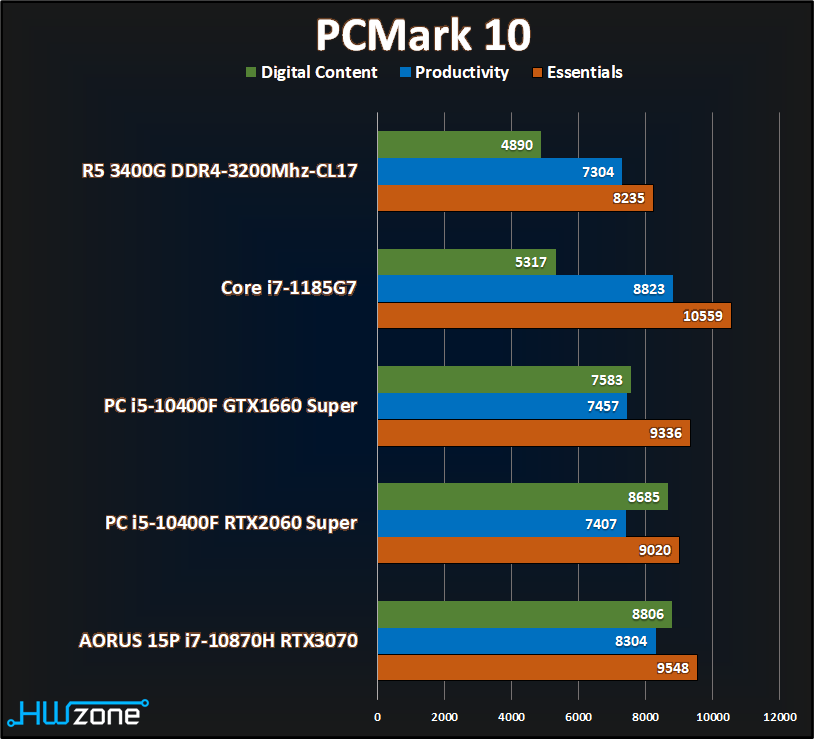 PCMark 10 software tests the responsiveness of the system, and the ability of the processor to handle heavy tasks in the sprint, which is exactly the opposite of what rendering software that takes time does. This test has three categories - one deals with the playing and encoding of Video Along with acceleration 3D (In green), the second deals with content creation and editing (in blue) and the third deals with general office applications (in orange).

Intel's Tiger Lake surprised us favorably when it introduced superiority over expensive and significantly larger systems including our desktops. Intel's hard work at the core cores, architecture and overall responsiveness of the system pays off very well for it with Tiger Lake when we see here that at least in productivity and office work this processor overtakes the rest we tested. We also took the processorAMD Has the most powerful graphics core that can be purchased locally today for a desktop platform and has not even had a chance to pick a category in front Tiger lake. 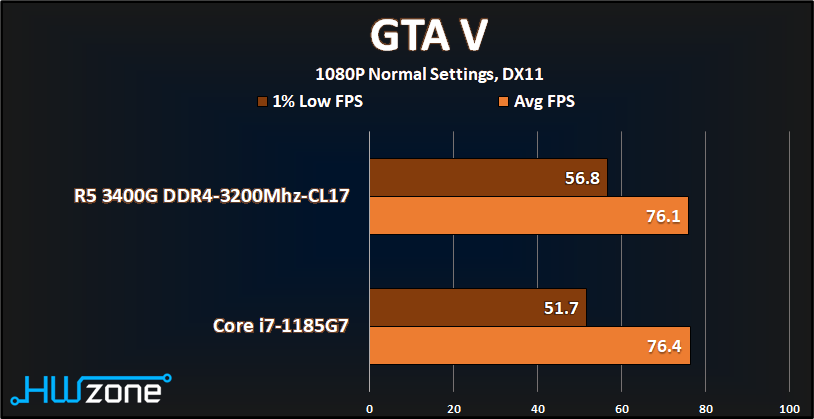 We were happy to see that the GTA V game was found to be completely worn with the 1185 G7 and also looked great at 1080P resolution on the PC. It is true that gaming is not the purpose of such a computer, but if it is possible to show off, why not. Performance is similar to that obtained with the Ryzen 5 3400G desktop combined with memory at a fairly standard speed. We think the difference here is mainly due to the faster overall processing cores on the side of Intel. 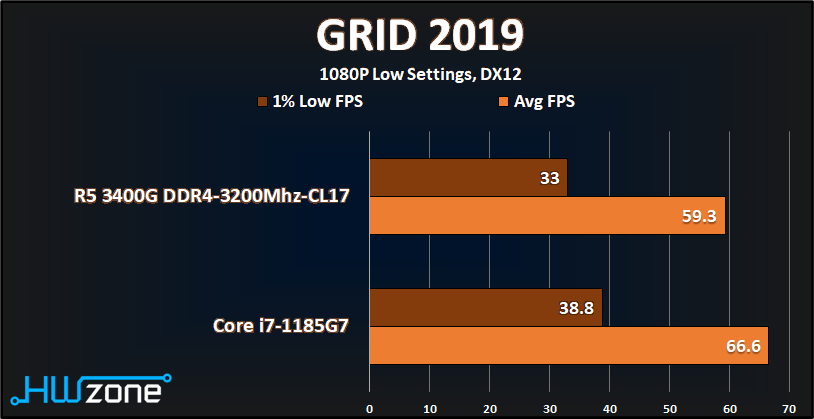 The GRID 2019 racing game surprised us when the performance of the 1185G7 processor was even better than those obtained with the 3400G. The 12th generation of graphics processors Intel At its peak. 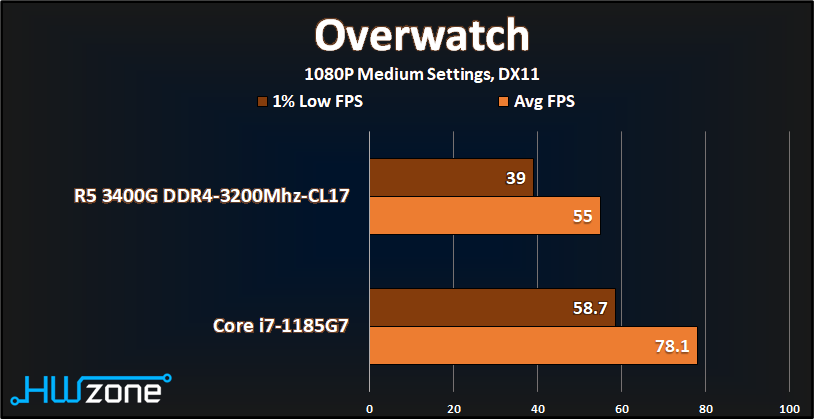 Laptop based Core The i7 1185G7 will also be able to enjoy Overwatch with excellent visual quality without any problem at all. 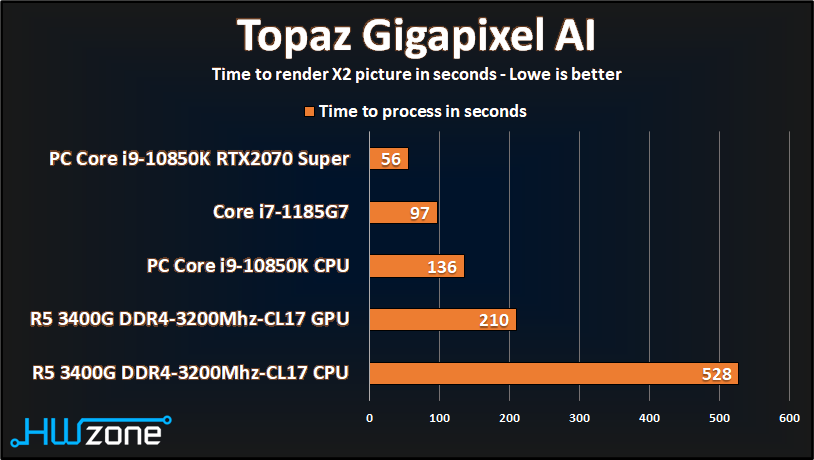 Last but not least there is a great image processing software called Topaz Gigapixel AI. This software allows advanced algorithms to increase the resolution of images based on existing information in the images. We measured the time to magnify a specific image to see how fast the labs do it. It is possible to use a graphic core or the processing cores to export the image. The amount of time it took for the Tiger Lake processor to do this is simply impressive as it surpasses even the capabilities of a modern desktop Core i9 processor. This is thanks to a successful collaboration between Topaz Labs and Intel In the customized development of hardware acceleration on top of processors Tiger lake.

It is important to note that the result reflects CPU mode processing versus GPU mode which uses the graphics core as the primary means. Using an advanced video card such as RTX 2070 Super as shown will of course offset the processing times but it is important to understand the ratio between the sweaty processing core on the computer Mobile For a desktop processing monster.

The future according to Intel - Small now, big tomorrow

The year 2021 marks an important year for Intel Perhaps more than any other year in the company's history. The developer is undoubtedly Tiger Lake processors that are starting to fulfill the grandiose promises of Intel In recent years. The transition to a truly advanced production process, a sharp improvement in graphic processing capabilities and an architectural improvement in the overall processing cores that includes access times, זיכרון A cache and diverse liabilities is the tip of the iceberg.

Processors like the Core i7 1185G7 hint at the tremendous potential of Intel Break out with large processing capabilities for any market segment beyond ultrabooks. Here we actually see the fruits of the engineers' Intel After a long period of development and hardware iterations one after the other. If Ice Lake was tasty, Tiger Lake is the main course. A processor with low heat emission and 4 processing cores that is capable of entering performance tests along with Processors In a significantly larger caliber, in our opinion, it is a sign of the chip giant coming. 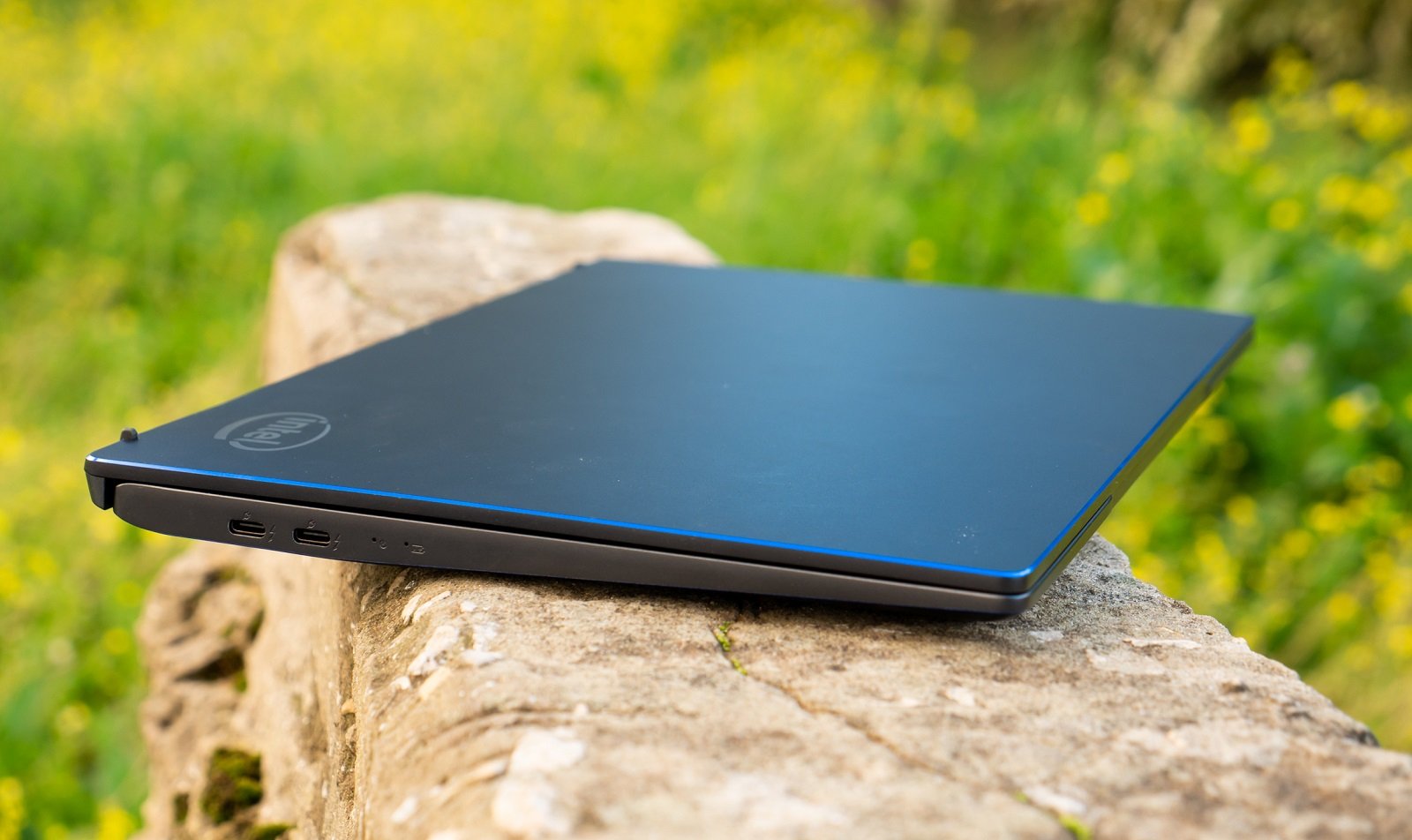 Thanks to the minds in Israel and other places in the world, a performance jump is made on every side Intel, And all it has to do (small task… no?) Is take this successful architecture and elevate it to the levels of performance we are familiar with in advanced laptops and desktops, especially in an 8-core and 16-thread configuration along with the high operating frequencies we are familiar with.

Tiger Lake symbolizes for us great hope for Intel, which seems to be faltering a bit in recent times due to the many difficulties and the strengthening of competition from every possible direction. Availability, performance and inventions in all types of markets is our great hope for emphases Intel This year. It's time to part with the manufacturing processes and the old architecture and move on to a more promising, more efficient future and one that reminds everyone that Intel has finished licking its wounds and is ready to return in high gear.