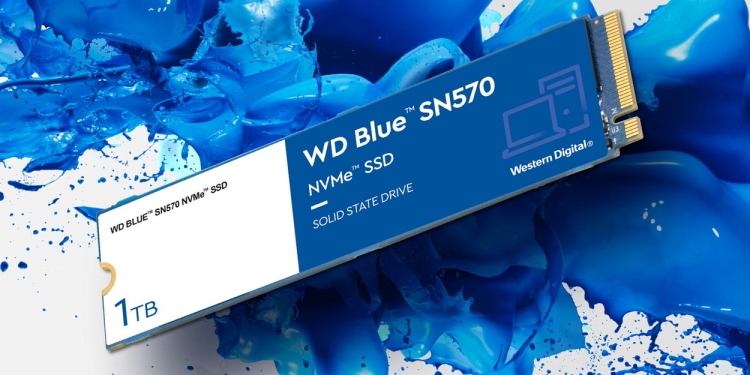 The WD Blue SN550 drives were launched last year and have proven to prove that there is no need to use the full bandwidth of existing communication arteries in the M 2 interface or dedicated built-in cache to provide performance that matches their price in the market.SSD.

Models of this family of Western Digital Become favorites among the budget models of the categoryNVMe Following a slew of flattering reviews from professional critics and regular users, they now get continuity that should have increased everything that was good in the previous round except the price tag.

The new WD Blue SN570 models will be offered, like the WD Blue SN550 models, in relatively modest volumes of between 250GB and 1TB, with a controller SSD The fruit of independent development of Western Digital That its capabilities and characteristics are not publicly and completely exposed memory Built-in cache, which serves as one of the main differentiators between drives NVMe Expensive and drives NVMe Cheaper on the market (especially in terms of the maximum possible random performance).

The SN250's 570GB model will be offered at the relatively most expensive cost in the family and with the lowest performance, when it can reach continuous read speeds of up to 3,300 MB per second and continuous write speeds of up to 1,200 MB per second along with a maximum random performance of 190,000IOPS in read Up to 210,000IOPS in writing - all of which are a healthy improvement over the SN250's parallel 550GB model, most likely due to the use of more modern TLC flash memories in the BiCS 5 architecture co-developed by Kioxia And Western Digital / SanDisk.

All WD Blue SN570 drives will be offered in a low M.2 configuration (with chips on only one side of the printed circuit board), without support for hardware information encryption, with support for SLC Caching to improve performance as a substitute for absence memory Built-in dynamic and with a 5-year warranty, with a writing volume of 30 percent of the drive's daily volume on each of the models offered - and the best news is that you can buy them right now, if you wish.

WD has started offering its SN570 models for sale on various platforms as soon as the official announcement, including on the US Amazon - so you 500GB edition of the drive You can already receive home delivery at a total price of a little less than NIS 190, after the addition of another product with the right to free delivery on the platform worth $ 7.01.

intrested In a terabyte volume edition? You can get it at a cost of $ 132.86 including free shipping and VAT, meaning NIS 429 to NIS 439 depending on fees.

Assuming that the good practical performance from the SN550 family will be maintained and even upgraded in the new models, this is a very good development for Western Digital and for us, the consumers - when a gradual required drop in market prices of SN570 drives down the road can undoubtedly make them senior favorites for anyone who wants to perform The transition toSSD (Or just add a little more to themselves storage SSD) at the most affordable prices.