The TUF GAMING OC is the cheapest representative of RTX 3060 Ti's models Asus. How is it functioning and is it worth considering its purchase before inventories evaporate? The answers are waiting inside

This week launched NVIDIA Another video card in its GeForce RTX 30 series. Contrary to many speculations that speculated that NVIDIA Is going to launch a particularly advanced video card, even advanced from the RTX 3080, inNVIDIA The plan is to continue launching graphic cards Gradually weaker ones that turn to larger market shares.

More than any other particularly expensive video card, the GeForce RTX 3060 Ti seems to be exactly the video card NVIDIA should have launched before the holiday season. This is a video card that officially costs $ 400, with third-party versions like the TUF GAMING OC in this review. In the RTX 3060 Ti review of the launch time We covered a little more on the background behind this launch. 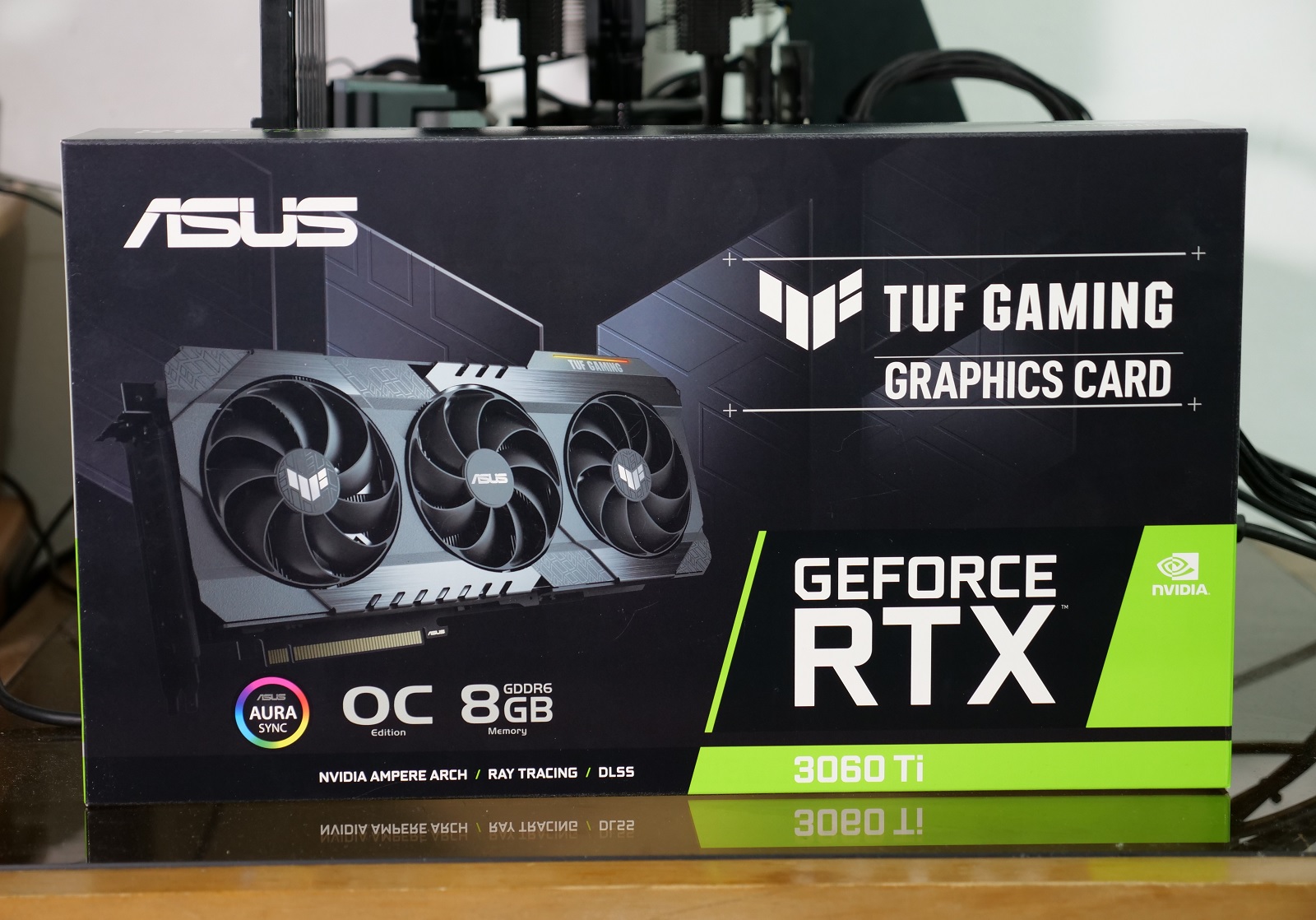 Before the launch of the GeForce RTX 30 generation of NVIDIA, She decided Asus That it is making a very serious overhaul in its approach to the TUF series (R.T. The Ultimate Force). This series began as a parallel to the flagships in its motherboards, with a long warranty and ultra-advanced components. 2017 of the hardware products is even considered a cheap and not so worthy brand name.The hardware reviews did not pity, and for poor performance the products received poor scores.

With the GeForce RTX 30 generation we are emerging to a reality where Asus TUF cards are not only considered and the cheapest that can be found on the shelves among the leading brands, but also those that manage to lead in the categories of cooling quality and noise level. If there are two important things in a third-party version of a video card, these will probably be the cooling quality and noise level. The RTX 3080 GAMING TUF was like that, The RTX 3090 model was like that too, And of course the RTX 3070. No wonder Asus wants to further promote its TUF models among different hardware media than other and more expensive models like the STRIX, it does not have much need for it. 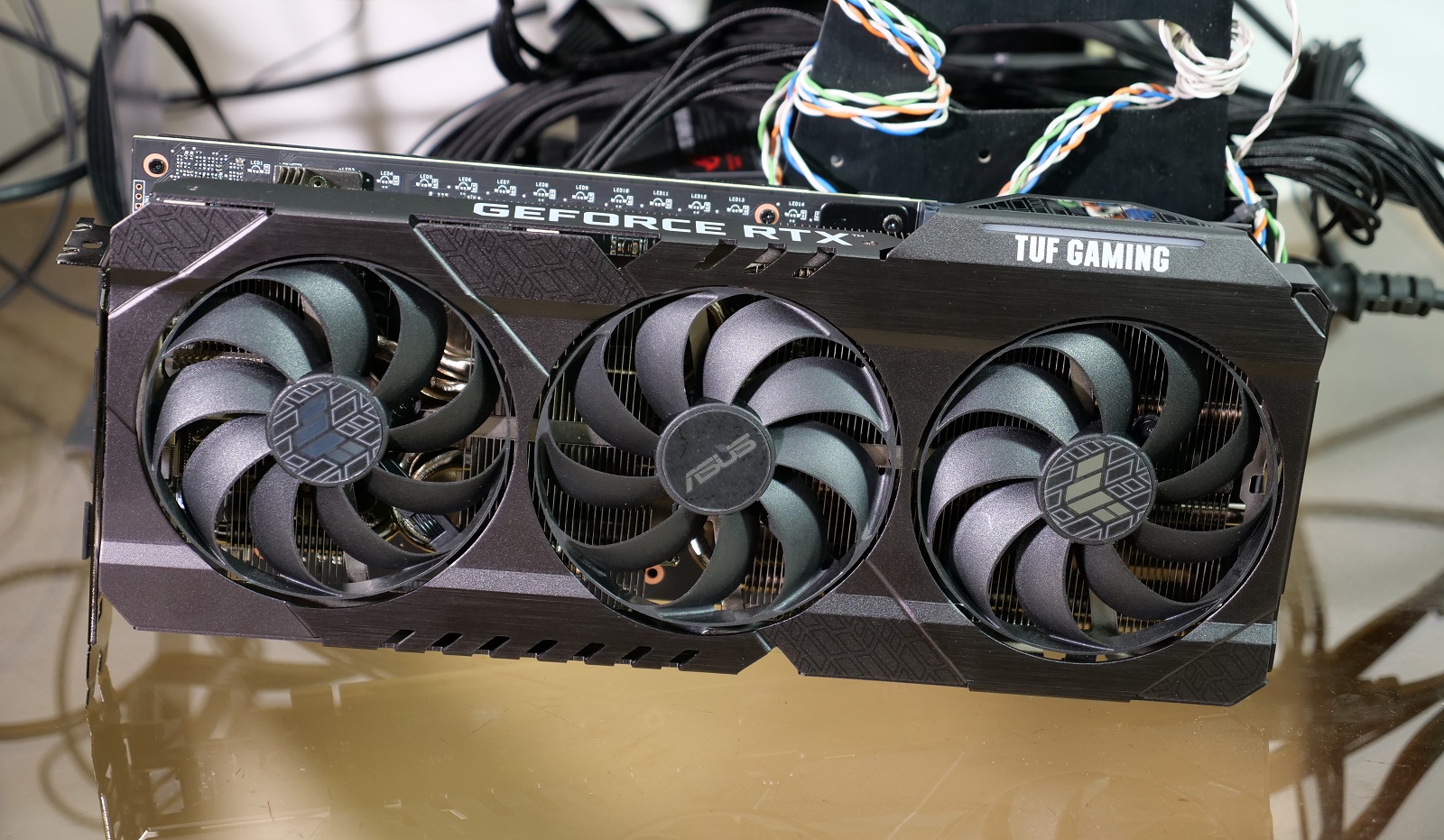 The GeForce RTX 3060 Ti is manufactured from the same GA104 core of the RTX 3070, as a result, life becomes particularly easy for the various hardware manufacturers when it comes to designing a video card for this core. The RTX 3060 Ti GAMING TUF is essentially the same externally as the RTX 3070 model. Cooling Serious with three fans, the same impressive and respectable size for the whole card. 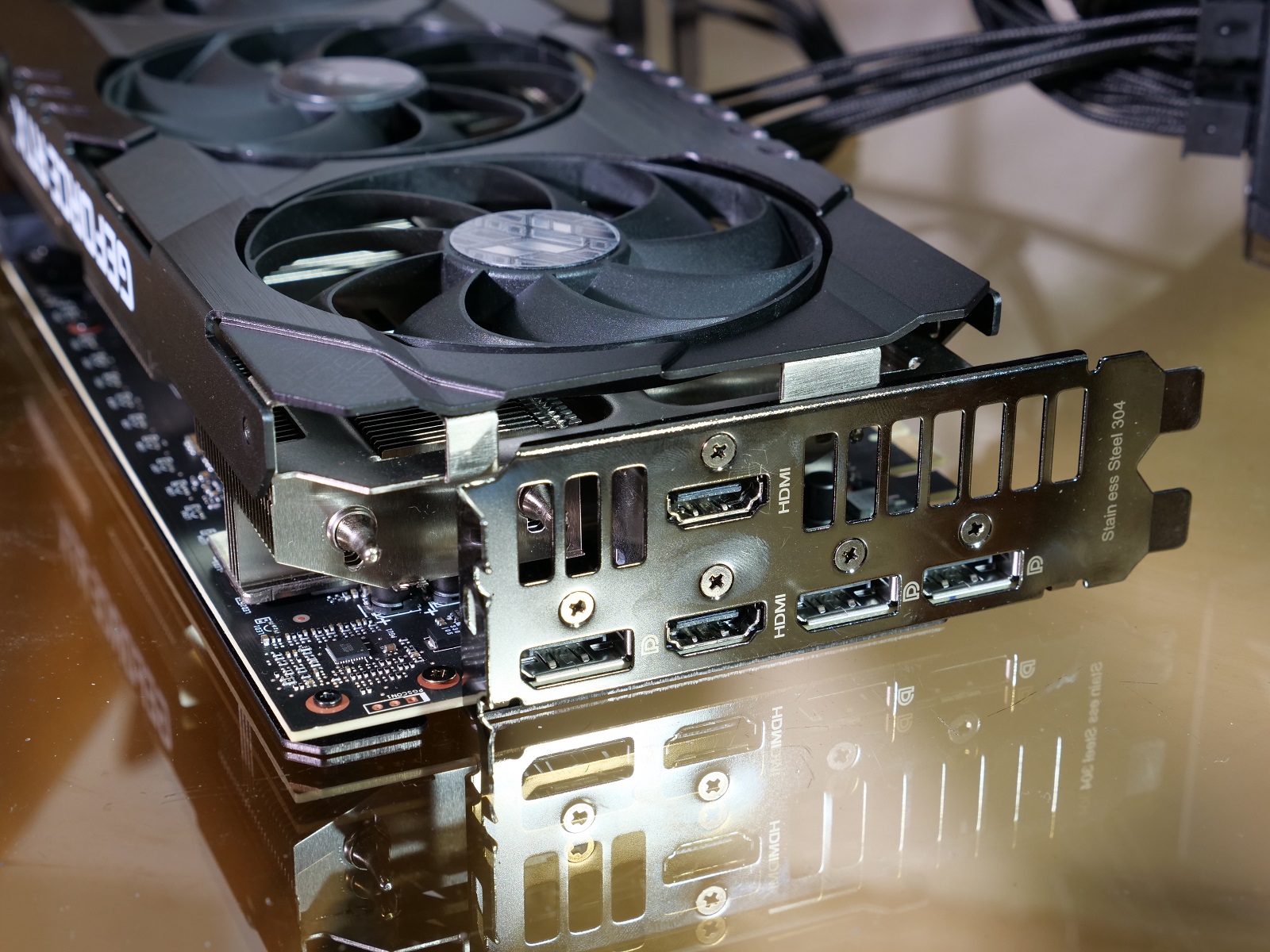 This video card has all the display ports you can ask for, including two HDMI 2.0 and three DisplayPort 1.4. What is not found here is a USB Type-C that supports the Virtual Link protocol that carries DisplayPort, as we saw in the previous generation, or in the current generation of AMD. 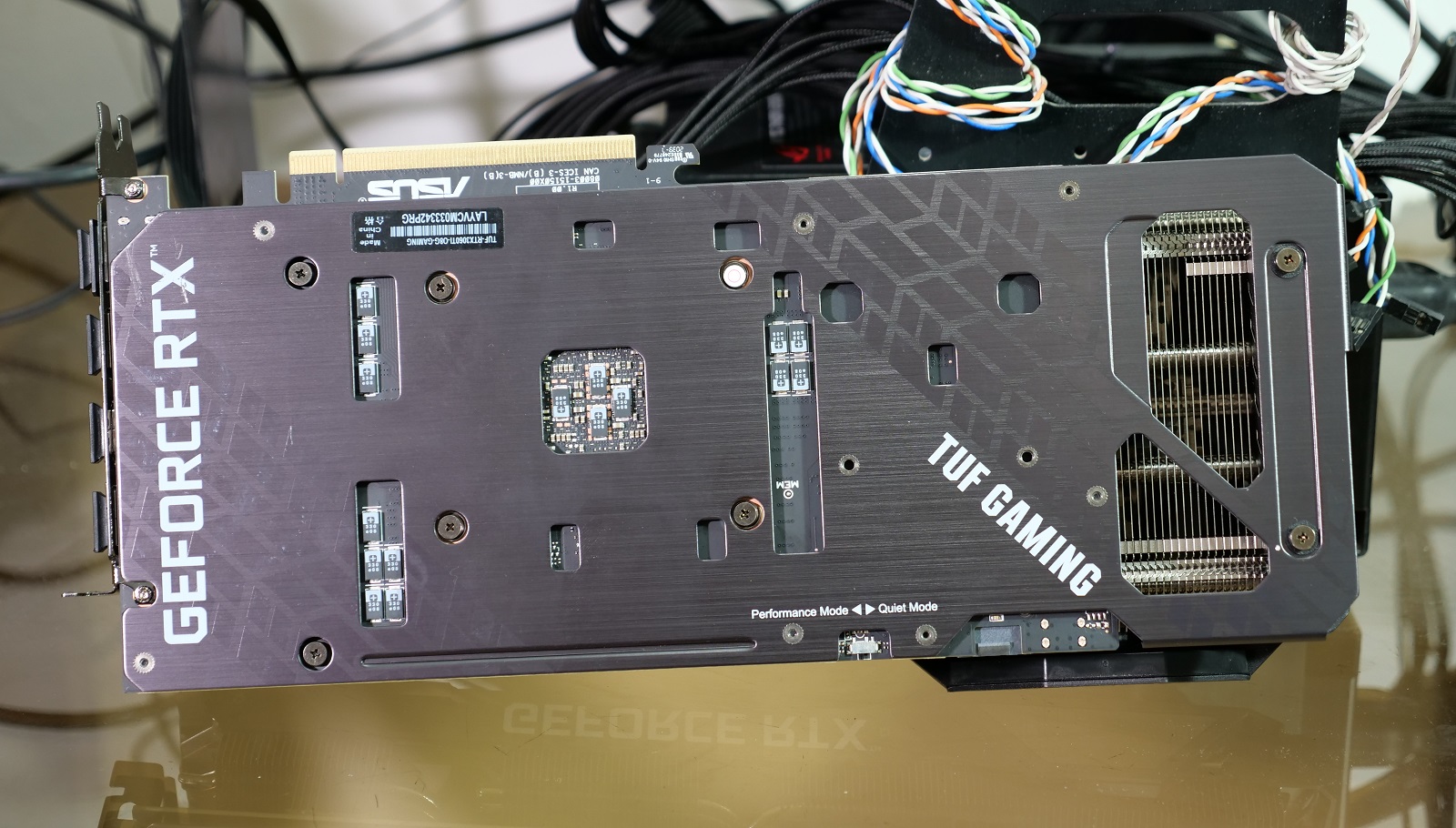 The back of the video card is the same back, with some of the hot air passing through the heatsinks and out of it. The printed circuit board itself is not particularly large. On the back you will find a switch that switches between two different BIOS modes, which can be used before turning on the computer. One mode will turn on the fans at a temperature Core 50 degrees lower, and the other only at 60 degrees.

The thickness of the card is 2.5 slots, which means it needs a little space on the motherboard, if you plan to install something next to it. This video card uses a single 8PIN power supply connector, which is good news for those with power supplies that do not have many connectors. Of course it is important that the overall power conforms to the manufacturer's instructions. 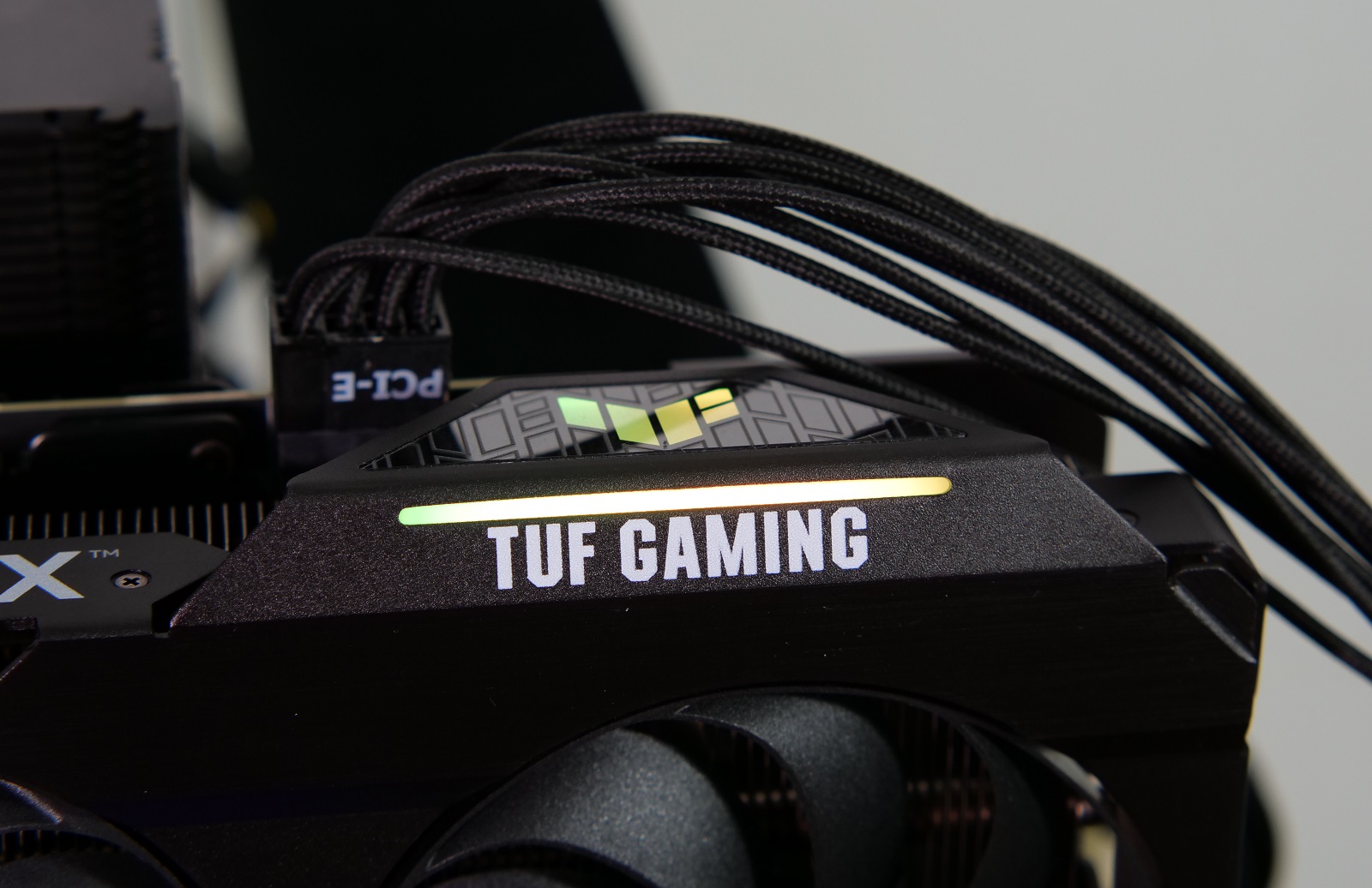 If you forgot that it is a gaming product, you can also find a caption of the series and some RGB on the side of the video card, which can be seen from the case window. You can control this lighting through the AURA RGB software Asus.

The technical specifications of this video card will be exactly the same as any RTX 3060 Ti you will find in the market. It has 4,864 CUDA processors, and an operating frequency of 1,410MHz at the base. The turbo frequency was slightly increased from 1725 MHz to 1755 MHz. The graphics memory is 8GB of type GDDR6. The memory controller is 256BIT wide.

It's time to move on to the performance tests.