[nextpage title = "The more accessible side of Turing"]We took the first video card from the new series of video cards NVIDIA Which is for the masses - does it continue to deserve the previous generation? The answers here

You can already smell the spring in the doorway, and finally after months of expensive and exclusive video cards fromNVIDIA We begin to see the fruits of its new Turing architecture in the form graphic cards Cheaper and accessible to the masses who want high-level graphics.

Remember, this architecture started out with RTX 2080 andRTX 2080 Ti, which was not only a quantum leap in performance, but also a fairly large one at prices with 1000 and 800 tags respectively, which is at best. Then we started to see more sane prices with RTX 2070 at a cost of $ 500, as a performance alternative to GTX 1080 at a slightly lower price.

The RTX 2060 gave us a glimpse of a noticeable improvement in return for the price with a $ 350 tag and performance similar to the GTX 1070 Ti, which was available at about $ 400 so far. True, the improvement here is relatively moderate, and this is the result of the lack of competition in the field of the only competitor AMD.


In the last few weeks it seems that the launch moves of NVIDIA Brings further improvements though in exchange for some features not found on these new video cards. Recently the GTX 1660 Ti and GTX 1660 - a pair were launched graphic cards In price tags of 279 and 219 respectively. The branding is GTX, but the DNA belongs entirely to the cards.Turing Launched so far.

Part of the reduction process and product rating is thatNVIDIA Completely removes the features that until now have been exclusive to the series RTX Such as real-time Ray-Tracing and DLSS display technology. There are many who will say that there is nothing to cry about spilled milk, or not found at all since these features depend on the graphic strength that exists only in limited quantities only in these new graphics cards.

About the strange branding? Yes, the 16 GTX series is real and the reason for this name according to NVIDIA Is between the GTX and the 10 RTX 20 It is better to choose a number that is closer to 20 and therefore the number 16 is set. You see, we also wondered about the strange branding, since right before we learned about the new names, the logical step about branding seems to us to be called the GTX 11 series.

And now, to the product. From the old manufacturer Inno3D sent us a video card that we believe is worth the stage, which is why we specifically addressed them. It seems that there has recently been a trend among manufacturers of this type and others not to invest much in the cooling devices of the cheaper graphics cards, or the expensive ones, and the result is very little metal and noisy fans. Inno3D's design will try to convince you to choose another one. 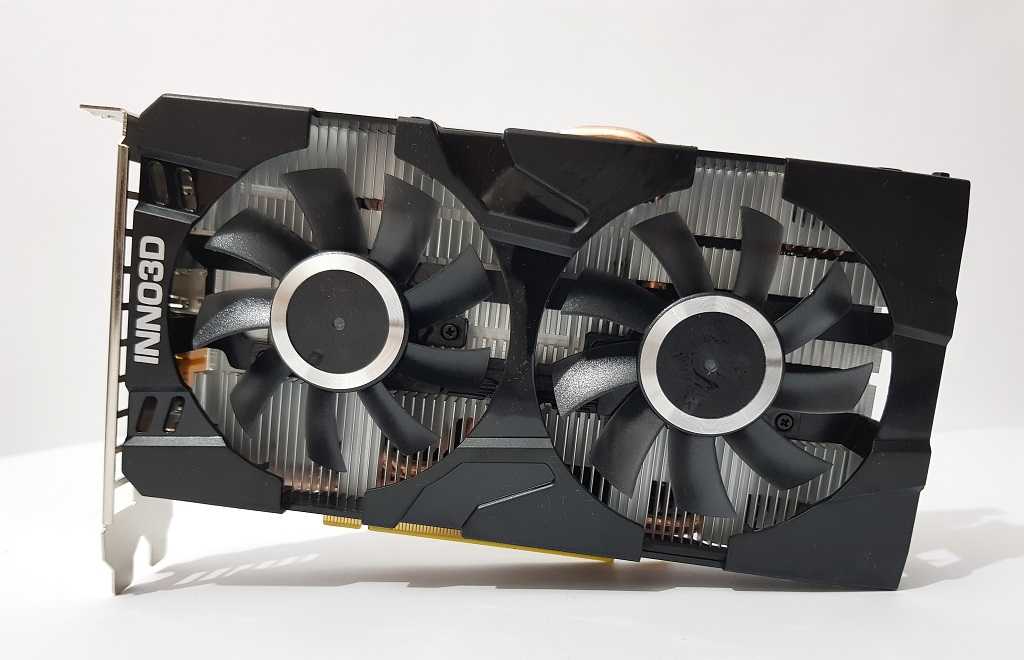 This graphics card comes in a price tag of 289 USD or EURO in the European market, which is 10 above the minimum price for GTX 1660 Ti cards. The addition is mainly for advanced cooling, which we will also focus on in the audit. 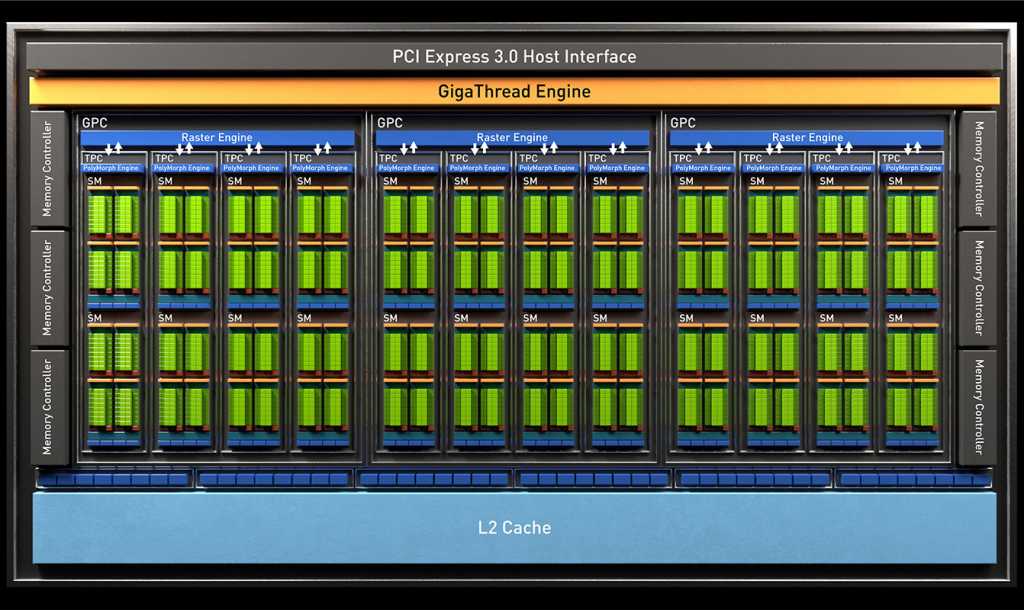 The graphics core that sits on the GTX 1660 Ti is the Turing TuxNUMX. This core is produced in the 116 nanometer process, which is no longer considered to be highly advanced,NVIDIA currently. The core is made up of 6.6 billion transistors used for 1536 processing units, and a controller זיכרון 192BIT width connected to 6GB of זיכרון Graphic type GDDR6.

For comparison, RTX 2060 has 1920 central processing units, the so-called Cuda Cores. At GTX 116 Ti1660 core you will not find RT cores or Tensor cores for AI and Deep Learning, so this video card does not support Ray Tracing and DLSS technologies NVIDIA, Features that have not yet become widespread or particularly important in the gaming world for most players. 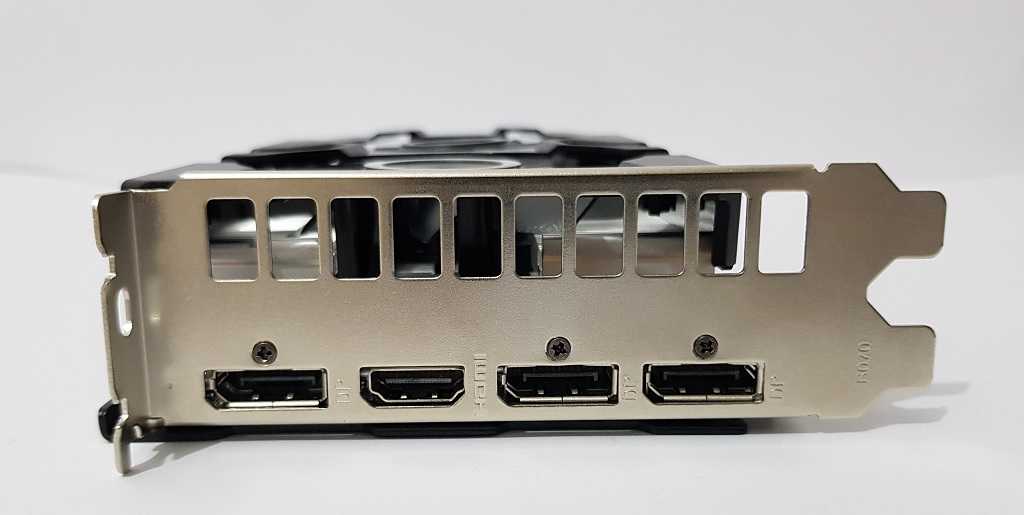 This video card has no DVI port, but instead of three ports DisplayPort And HDMI to support the display 8K. Four screens can be connected simultaneously to these ports.

The graphics card thickness is the thickness of two interfaces on the motherboard. According to Inno3D, it is recommended to use a rated power supply of at least 450W,PCI-Express 8PIN on the left. The graphics card length is only 19.6 centimeters and should match the vast majority of today's standard computer enclosures. 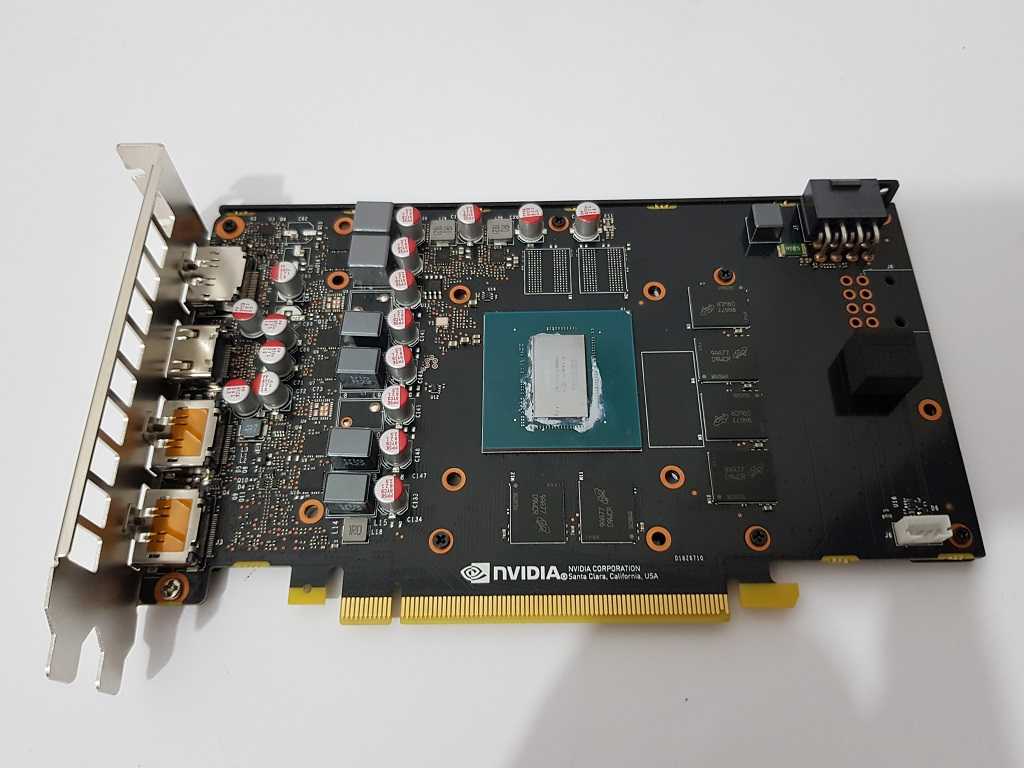 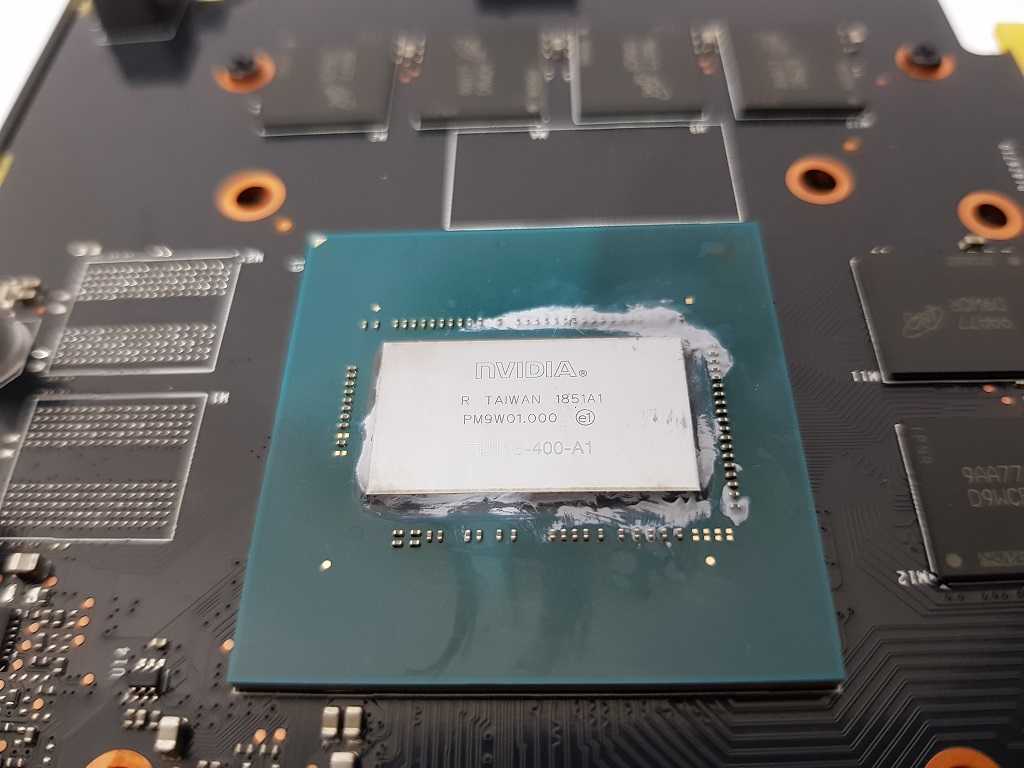 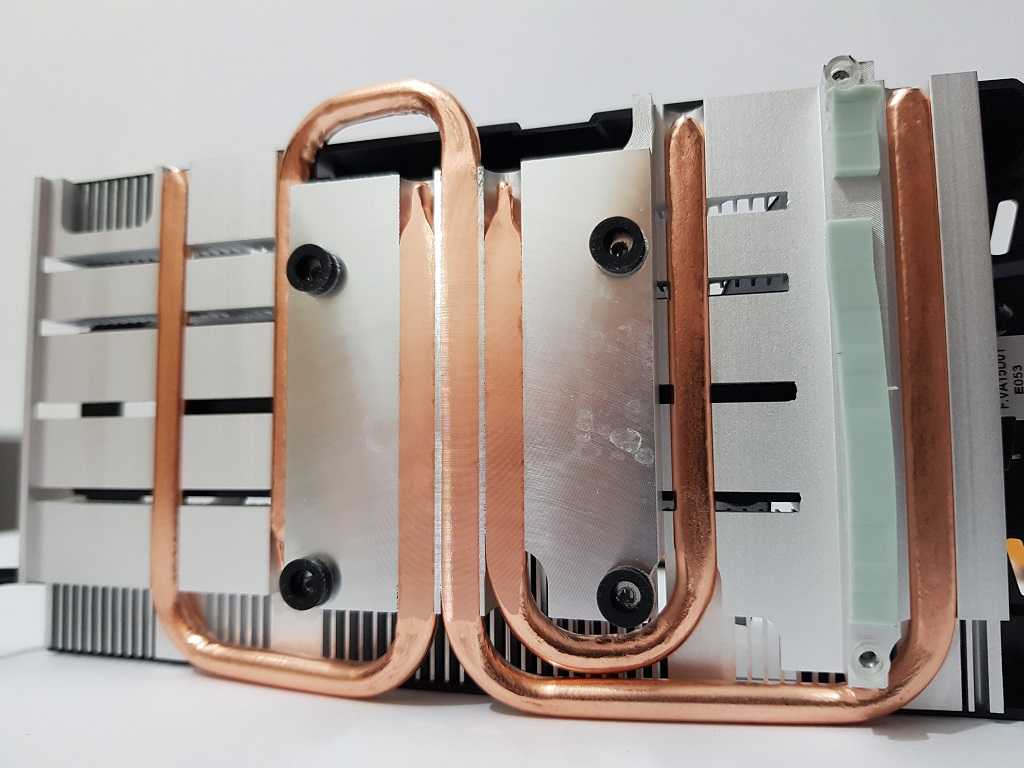 The bottom of the heat sink contains 3 copper tubes with a diameter of 6 millimeters. This heat sink is made mostly of aluminum which is cut off from one single castor, a procedure which is usually quite inexpensive to create unlike my body Cooling Which include thin aluminum fans mounted on and around the copper pipes. Nevertheless, it is a body Cooling More respectable than that found on many 1660 TiX GTX models, certainly around this price.

It's time for performance tests.

The core operating frequency is 1500Mhz and is completely standard and without The fast. The memory operates at an effective frequency of 12Ghz but chips are used to work up to 14Ghz, The fast Simple to this frequency at least. Chips GDDR6 Most are designed to work at the frequency of 14Ghz-16Ghz and this is how the situation is created.

GTX 1660 Ti's memory capacity is 6GB just like the one we used to be on the old GTX 1060. volume זיכרון This is still considered quite respectable for FullHD 1920X1080 players and there are not many titles that need more than that under high resolution settings. 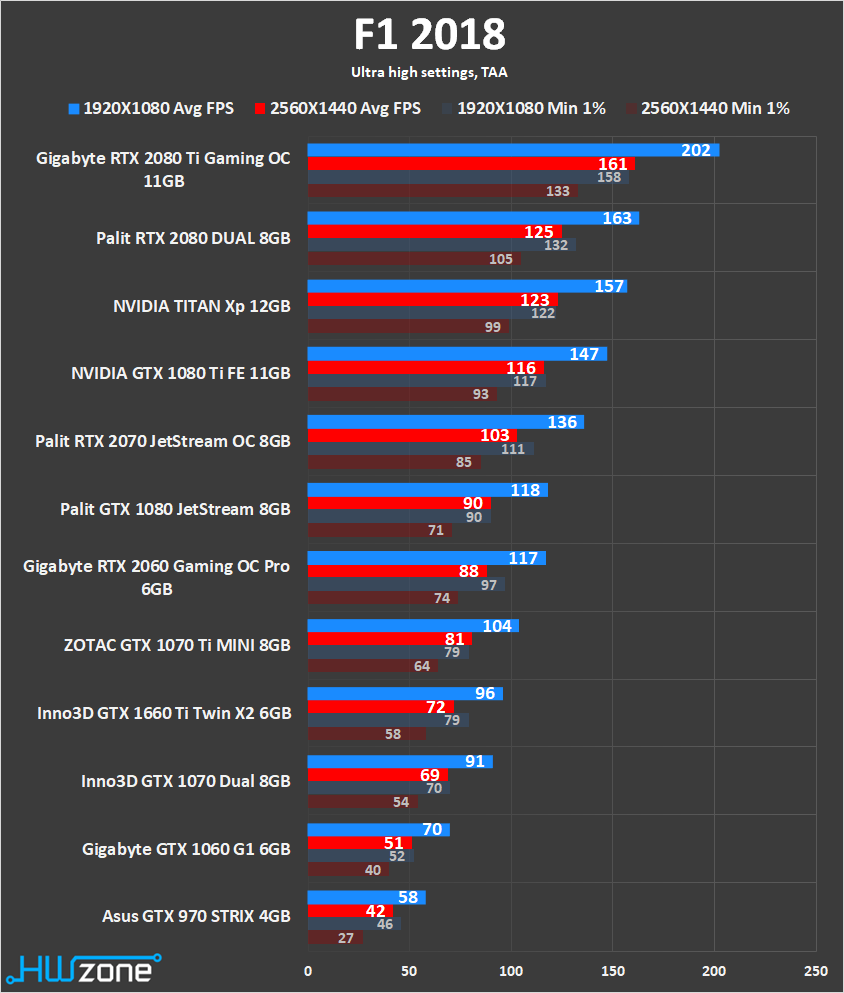 In the Codemasters racing title he demonstrated the video card Performence Slightly higher than the GTX 1070 tested. Performance improvement Compared to the GTX 1060 6GB, a similar video card launched when 30 months ago is an average 36%. 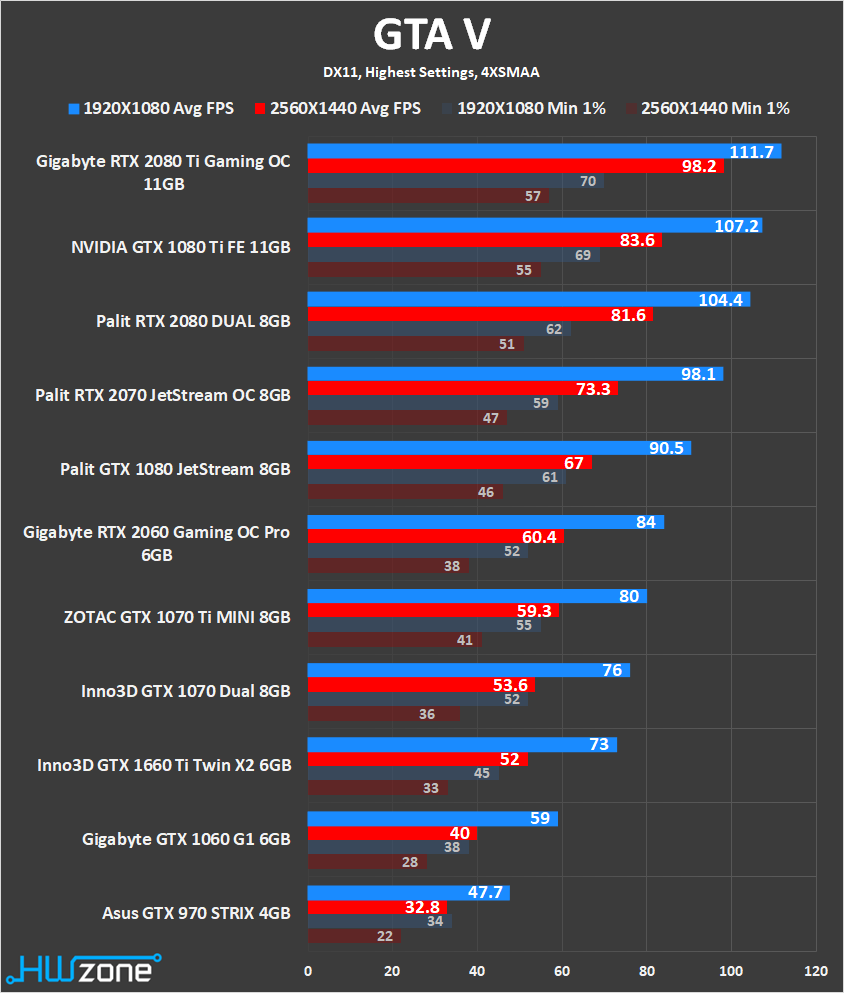 The mega-popular game GTA V does not want to fade and remains on the bestseller list even today, about three years after he left the PC. In this game we note thatTuring There is no significant advantage over the previous generation. The GTX 1660 Ti is located just below the GTX 1070 here. 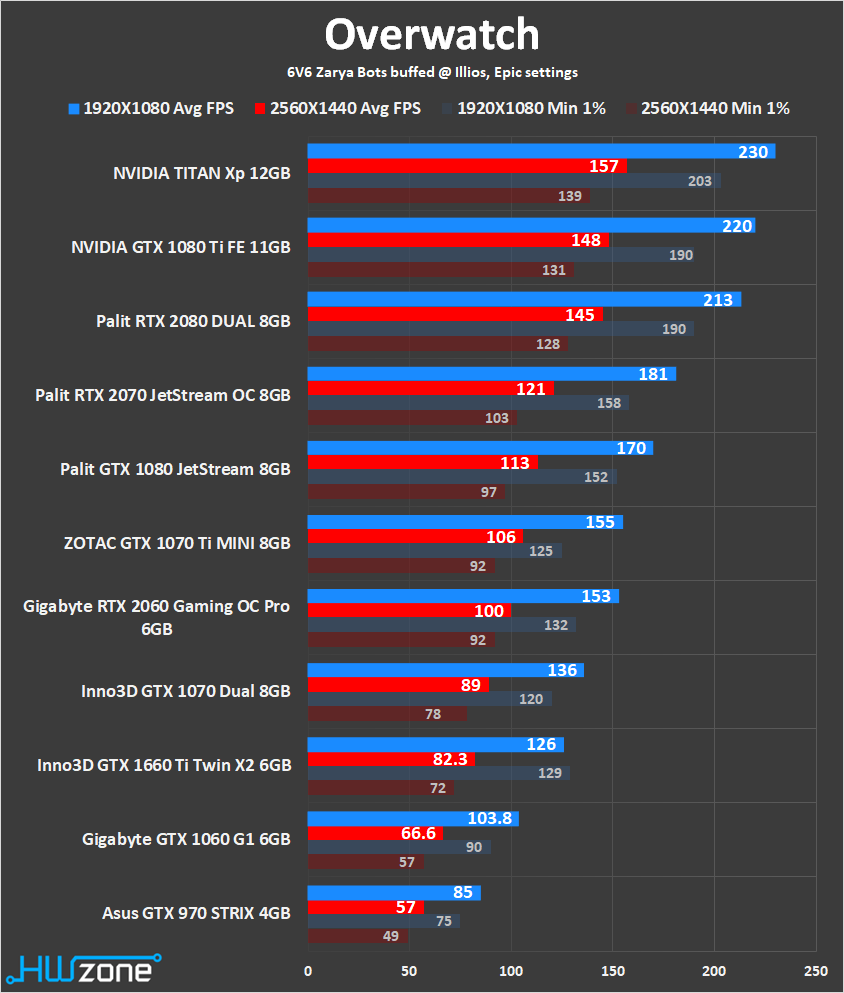 In Blizzard 's electronic sports game, there also appears to be no performance priority for the new series' cards NVIDIA With the GTX 1660 Ti attached back to the GTX 1070. The difference is small and insignificant at all. 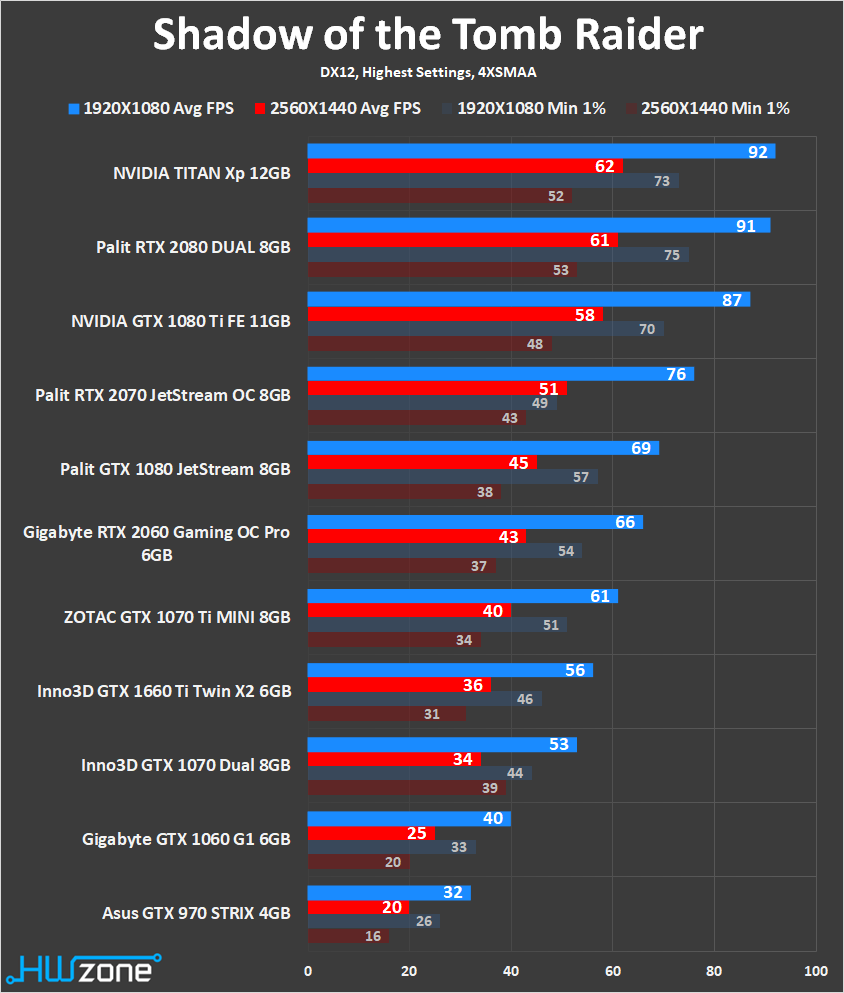 In the last title of the Tomb Raider series, there is a rich graphic level rich in realistic elements. The special RTX features do not work for the fairness of the examination between the various graphics cards. In this title GTX 1660 Ti's hand on the top versus GTX with 1070 Performence Almost complete with 1920X1080 resolution. 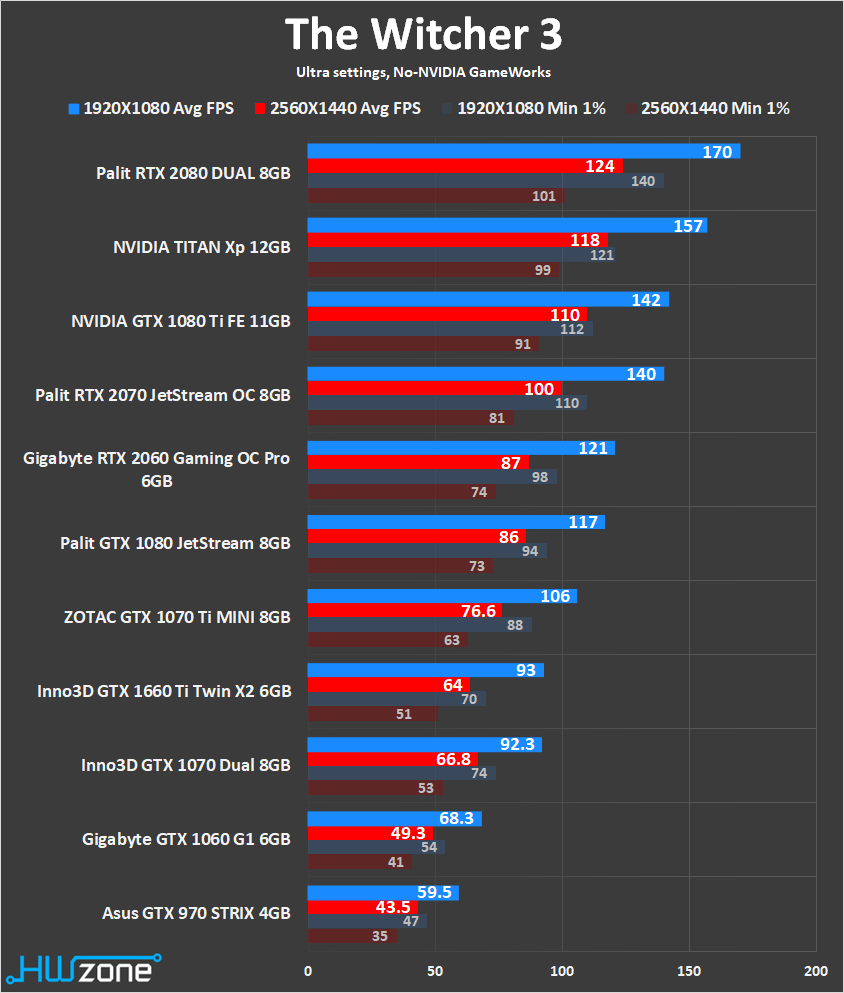 The Witcher 3 game shows a behavior pattern similar to GTX 1660 Ti as shown to cards RTX In front of him with a slight preference for the new cards over the previous series a typical parallel bull. 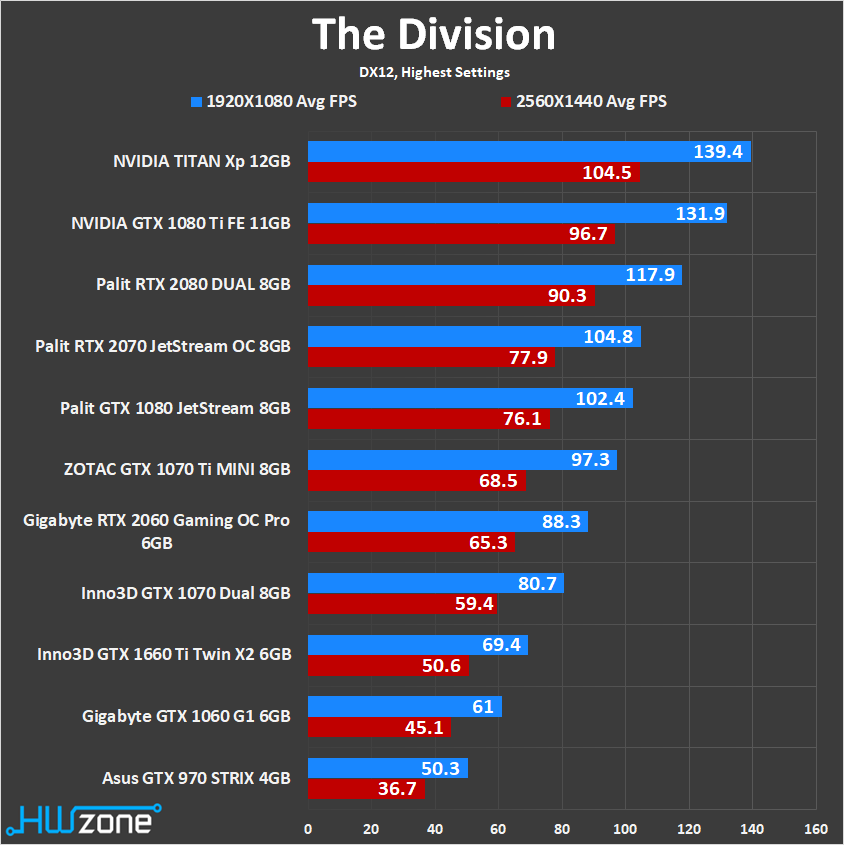 The Division has already been replaced with a new one, but the same engine is being used and we will keep it just a little longer to manage this performance pool. The game shows GTX 1660 Ti relative weakness to the old GTX 1070 front. This weakness is similar to that of fish RTX 2060 vs. GTX 1070 Ti. 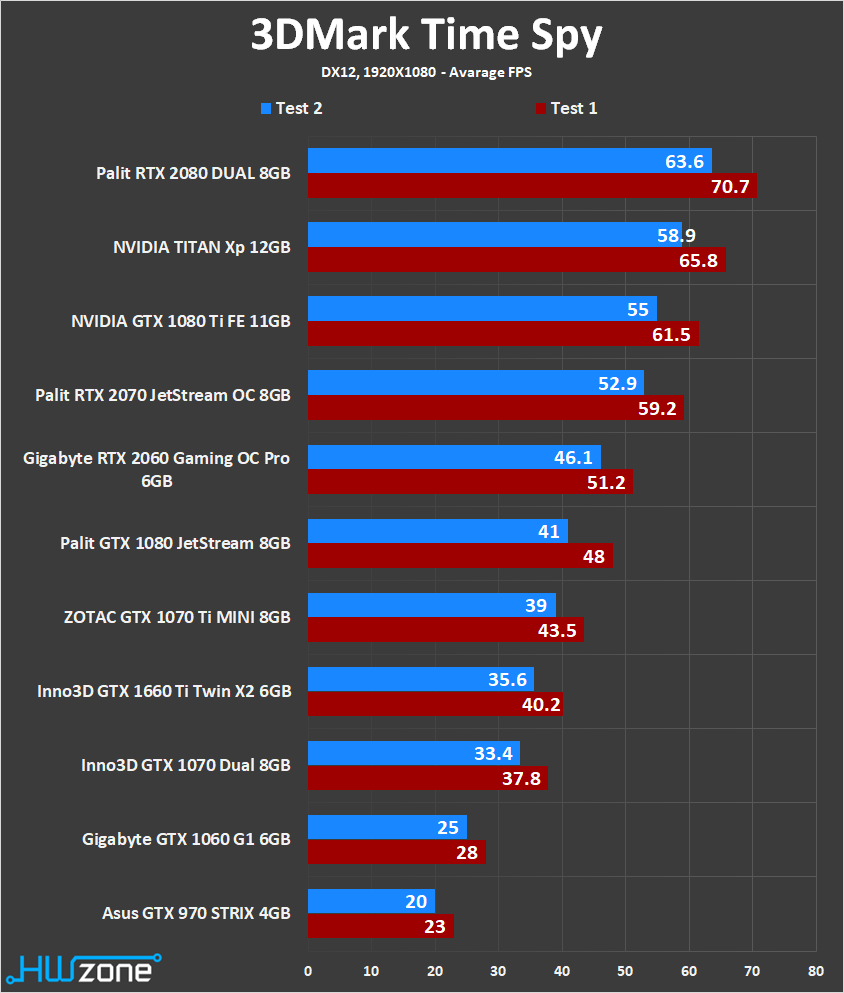 For dessert we must not forget the synthetic test 3DMark Time Spy that beats well on the most powerful video cards today and uses every possible resource. As a result, we see here the GTX 1660 Ti is located close to GTX 1070 Ti. 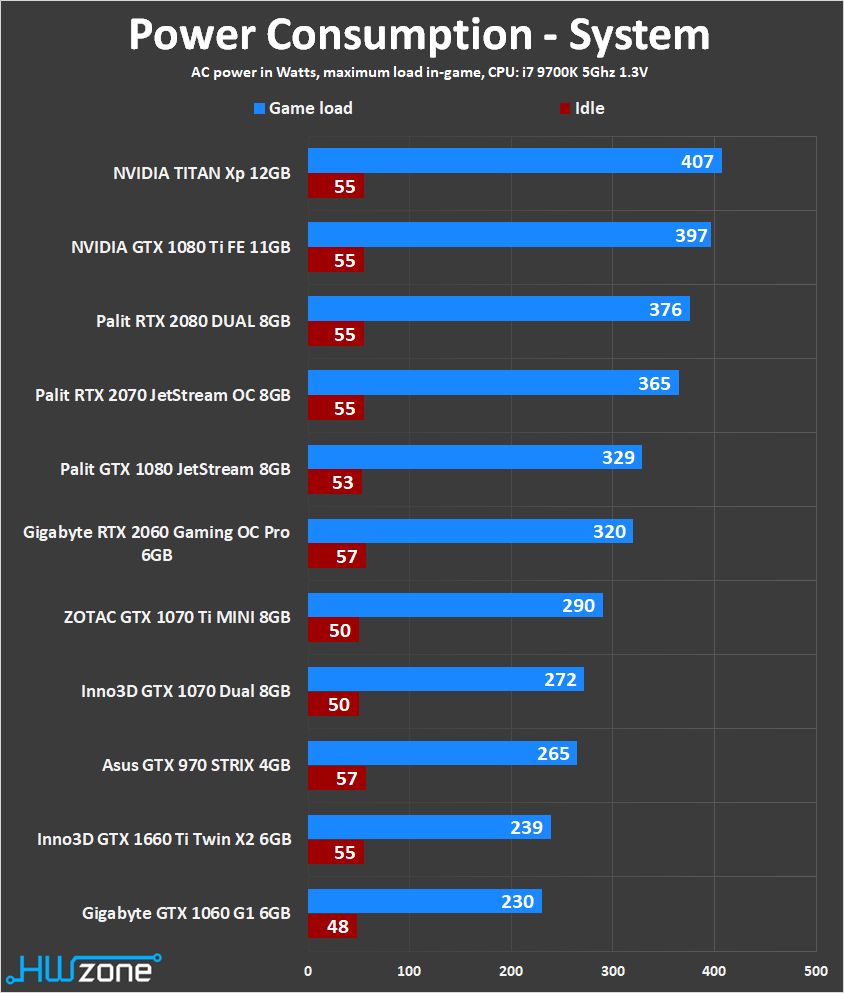 The test system's power consumption with the GTX 1660 Ti is quite low and stands for 239W AC only. In accordance with the recommendations, a quality power supplier rated 450W will definitely do the work with a similar system to our testing system. You can also get quality 550W suppliers, which have recently become very cheap.

With regard to the GTX 1060, we see an improvement in efficiency that is reasonable and worthy of today's standards. The processor to the 12 nm process compared to the previous one of 16 nm is mainly responsible for this, along with the nature of the new architecture. Of course, this improvement is one of the moderates we have seen between generations and a much more significant one is likely to take place when you pass NVIDIA To an innovative production process of 7 nanometers. We look forward to seeing what NVIDIA Do this process from a factory TSMC The Taiwanese.

The core temperature of the video card while it was at room temperature of 22 degrees was 66 degrees Celsius. Fan power is quite low and stands at 40% and at the speed of 2400RPM. The ambient noise is 31dbA and the noise measured from a distance of 30 centimeters was 34.7dbA. This video card is not the quietest we tested, not at all. It is not very noisy and the noise tone is relatively low and does not hum.

The graphics card GTX 1660 Ti and especially the model of Inno3D is the entry ticket to the new world of performance NVIDIA, At least for those who want a product that has fresh technical characteristics. This is a product that improves on what we have been accustomed to today to receive on the GTX 1060 not drastically. The improvement is respectable, but such a video card is a product from lack of competition with AMD Created in the past two years.

Compared to the more expensive GTX 1070, the GTX 1660 Ti replaces the beats with which it comes out quicker and sometimes slower. The price for this performance plummeted from the 350 dollars we were used to on the GTX 1070 at least from 300 dollars on this card. For US invitees the average price of cheap GTX 1660 Ti models is about NIS 1250, in the country the price is closer to the NIS 1400 area. Here you can find Inno3D models in Israel for a fair price. 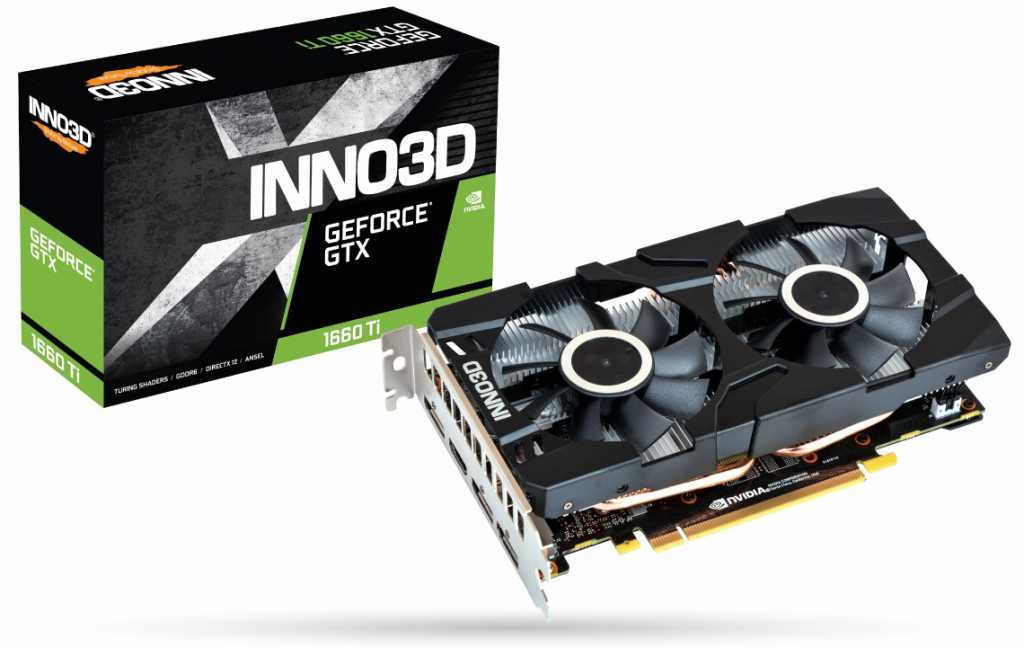 Among the basic graphics card graphics, the Inno2D twin X3 is more balanced and serious. We think that for the addition of 10 dollars or euros, this is fairly fair, since the cruises in the most basic models are significantly smaller and much less efficient. The cooling itself is a noisy tip from what we would consider to be optimal and it is worth taking advantage of the comfortable operating temperature to lower the volume of the fan. Like other curbs on the market today, too Cooling This is semi-passive and the fans come into operation only when the temperature is passing Core Of 50 ° C so that it is completely silent in outside situations for heavy three-dimensional processing.

At the moment, the only answer to this video card is the RX 590, which is already on RX 580 on our test table. This video card is priced at about $ 230 and less in sales, but it is also considered weaker and much less efficient.

For those interested in a combination of high efficiency, fair price and upgraded performance on the RX 580 and GTX 1060, the GTX 1660 Ti is a good choice. It can be seen as a fairly reasonable upgrade even on the graphic cards Such as the GTX 970 and will certainly be a significant upgrade over the existing GTX 960, a card belonging to the same accessible and popular market segment.

Inno3D's card accepts our recommendation for minimum price, visibility and performance Cooling Good. We think it's a great choice among the cheaper versions of today's graphics card. Well done.