The latest NVIDIA driver version, In the 344.75 version, Finally, enables the use of Multi-Frame Anti Aliasing (MFAA) Based cards The new GM204 core of the company

The new Maxwell architecture generation NVIDIA Come up with a host of new technologies and features that purport to give us enhanced visuals - DSR, VXGI and TXAA just some of the names that have been slowly entering the company's arsenal over the last few months. Now comes the turn of MFAA technology.

in short, MFAA technology Designed to allow smoother performance than standard MSAA technology, with less performance impairment - the best of all the worlds of Anti Aliasing, in other words.

In practice, MFAA seems to be doing the job - the visual comparison to MSAA may bring about subjective results based on the eyes of the beholder, but In terms of Performence It seems that MFAAx4 does offer Performence Are almost identical to those of MSAAx2 and are significantly better than those of MSAAx4. 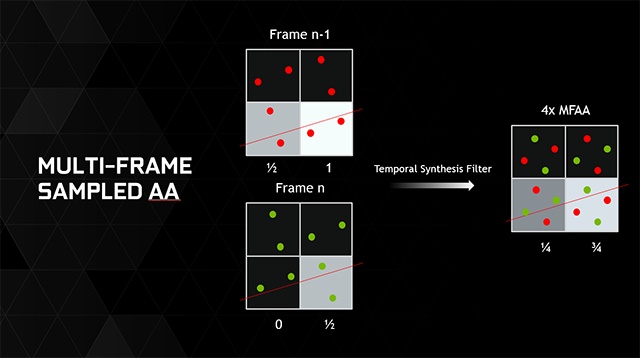 MFAA technology is currently supported by 20 titles, and because its implementation does not require deep implementation by developers (as opposed to other new NVIDIA technology, Which is named TXAA) We will see many more titles that will adopt it in the future.

Bottom line, MFAA may not be a technology that will revolutionize the gaming world - but it is While 'bonus' Nice home NVIDIA Which will allow players to get better visual quality almost without sacrificing performance (and also help the company make its new cards more attractive and desirable).

Comparison of MSAA and MFAA skating technologies in titles Battlefield 4 (right) and GRID 2. What seems more qualitative to your taste?