The Western Digital storage giant has a variety of storage products that we have known for decades. In recent years, the company has focused, among other things, on fast storage solutions such as SSD And our regular readership knows that we sometimes bring WD products up for discussion when it comes to different sales and deals after scans and searches for the same lucrative products across the web.

There is no doubt that after WD acquired Sandisk, it became a significant player not only in the world of traditional hard storage, but also that of NAND with a host of drives SSD And WD's well-known branding also got there in the name of the colors that symbolize the various market shares. The colors that pertain to the home user are green, blue and black. These serve according to the domestic market share according to the performance requirement and durability accordingly. The WD Blue Series is considered a mid-market, and what many gamers and end users are expected to use according to WD. We know so far that the SN550 is a drive that is gaining a lot of popularity among users and stores thanks to its accessible price and reasonable performance. The SN550 is a step above the whole driveSSD Free זיכרון DRAM when it comes to file transfers and speed under intensive work.

Underneath the SN550 there is a drive called the SN530 as it contains a fairly simple performance layer. Now, WD is launching a big brother to the blue family, the SN570. Here are some technical facts. The SN570 like its brother is a drive SSD In M.2 configuration with a size standard of 2280 (meaning width of 22 millimeters and length of 80). This drive uses the storage protocol NVMe 1.4 via PCI-Express 3.0 X4. There are currently three volumes of this model - 250GB, 500GB and 1TB.

This drive uses storage NAND Based on TLC (Tri Level Cell) technology. Technology This is mainly known for the combination of durability and speed, unlike SLC (Single Level Cell) which is known mainly for speed but not for resistance to many reading cycles.

The 570TB SN1 drive is rated for 600TB of write cycles according to the official WD statement of durability. Alternatively, its runtime rating stands at 1.5 million hours of operation. This is a rating slightly above average, but no exception. WD backs up this drive with a five-year warranty. Also, the warranty length is average and common, but quite respectable.

Note the efficiency and amount of components on the printed circuit board of this drive. It contains only three main components with one being the main storage controller. Next to it is the power supply system for the drive. On the other side sits the chipNAND With a capacity of 1TB This chip that WD uses for its drives is a NAND controller without DRAM memory of any kind. Therefore, no chips are found here DDR Or LPDDR as we are used to finding in advanced SSDs. WD is betting here on the performance of this controller in a market share where drives are sometimes found that do contain chips DDR For caching purposes of the controllerNAND. Admittedly, a good cattle is one that contains a respectable amount of זיכרון A cache in the chip itself and can provide reasonable performance in any situation. This will be discussed later.

On the right you can see the PMIC (Power Management Integrated Circuit) stabilizer next to a variety of capacitors. This system takes care of the drive controller and the chipNAND His will get as regular and noise-free as possible. Here you can see the chipNAND Homemade by WD. The SanDisk branding is in no hurry to go, but it's WD's own production division for all intents and purposes. To the side chip This is another number of capacitors for verifying proper and healthy power supply.

The WD Blue SN570 is a drive that is set for a maximum power consumption of 3.5W and a typical of only 90 milliwatts. We do not get a clear division here between its three components, but we are not surprised if at least half of it is going to visit.

For the purpose of examining this drive, we used an examination system consisting of the following components:

With the WD Blue SN570 we tested two drives that are considered quite advanced, both of which even come compatible with PCI-Express 4.0 with double the maximum traffic volume. We also included an SSD drive that was considered advanced in the past but its speed is quite average for today, the 760P of Intel With a capacity of 512GB. Drives that come without cooling have also been tested with the proposed X570 AORUS MASTER motherboard heatsink for drives SSD. The Aida64 random read test is an excellent load test. This test puts a long load on the drive for about 12 minutes in which 64KB blocks are read from different areas of the drive. This is not the heaviest test that can be run on a drive SSD But that's exactly why we like it. It implies a long load of a complex file system for a long amount of time. This is how it looks over time. The green graph belongs to the SN570 and the yellow to the Kingston Fury Renegade which is considered to be significantly more advanced and expensive. The relative stability of the SN570 indicates that it is very efficient, both electrically and in terms of evacuation זיכרון A cache for new tasks.

The ATTO Speed ​​Test displays maximum write and read speeds for each block tested. We chose a range of 4KB to 8MB for files that runs at any speed. The smaller the files, the slower the transfer of more of them. At 256 KB per file the transfer speed stabilized and continued like this until the maximum volume. This is how it looks in the graph against other drives at three speeds: The ATTO read and write test does not result in an overheating of drives SSD That is why the drives were tested here as they come out of the box and with no extra body Cooling. The SN570 exhibits fairly healthy overall performance as an entry-level drive, even compared to the 760P. Its 4 KB random read speeds are excellent and in line with the other drives, also significantly more expensive. 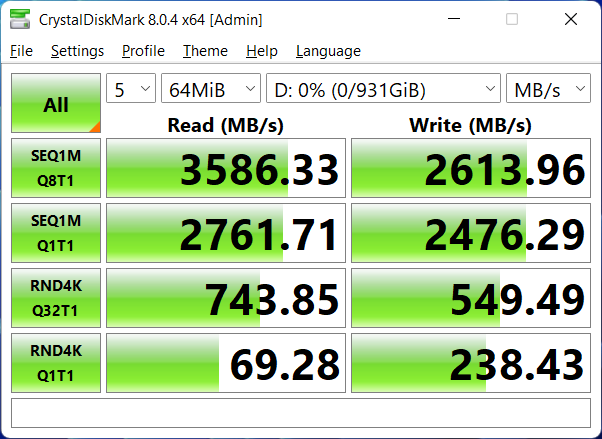 When a manufacturer declares a maximum drive speed SSD, This is the maximum speed when transferring one large file, simply because it leads to the highest numbers. This is a technical detail that is used more by marketing than users. The SN570 is capable of reaching close to the descriptive speed limit of thePCI-Express 3.0 X4 given to him. The 4KB tests present a particularly heavy load on the drive controller at random reading of extremely small files. In recent years, the importance of this figure has been declining as file systems begin to contain more and more files that even the smallest ones are significantly larger than 4 KB. CrystalDiskMark Q32T1 mode displays the speed of reading or addressing such files when there are always 32 of them in line. This is how it looks with other drives tested. The SN570 coming to market at a price lower than the 760P's Intel Shows progress in the world ofSSD In return for a price it is a reality, both in volume and speed.

Difference between drives NVMe Variety is not as prominent in game loading as it is prominent in such and other tests that eliminate every technical detail in them. Factual - we have seen that with significantly more advanced and expensive drives charging times have become shorter, though not significantly or noticeably at all. The biggest difference was in RDR2 which made us wait two more seconds and that's it. Given that it's a game with an extra long charge from pressing the power button on the windows to the save charge, this is not a big difference.

The WD Blue SN570 drive is a respectable addition to the company's product line. In our performance tests it has stood up respectably to significantly expensive drives. Given that this is a drive without a drive זיכרון DRAM, its performance even surprised us. We expected to see it drop in some performance tests.

Another positive part is that the drive has relatively calm maximum performance and chip use NAND Isolated for storage, there is no slowdown due to overheating of the memory controller. We did not notice the deceleration of the drive even after its 30 consecutive minutes with no active cooling at all in stress tests and no ability to capture a moment of rest. Monitoring-NAND Reported a maximum temperature of 72 degrees Celsius in an effort with an ambient temperature of 23 degrees and no airflow in the area at all. A right point here for the SN570 compared to other drives.

As of this writing, the price of the SN570 is $ 100 for the 1TB version which is about NIS 390 if it is free shipping, or about NIS 435 after shipping from large overseas stores that do not ship for free. The drive has not yet arrived in our country but will cost more here, as expected. Given that at the moment the SN750 SE in the same volume costs exactly the same, this deal is not worth it, sharp and smooth. True, the nature of drives SSD New is starting to get a little more expensive and after a few weeks start to drop in price. Therefore, we give here to the SN570 the carrier hot card. We very much hope that its price will improve in the coming weeks. This drive comes with a five-year warranty, and it's nice to see that today the standard for Blue drives is such and appropriate for a competition that has also traditionally raised a warranty period for this type of drive from three to five years.

There is the WD Green SN350 itself which costs about $ 83 for such a volume, but it is a drive with a third of the durability rating apart from the fact that its warranty period is only three years.

The SN570 series has just hit the market and seems to be a pretty successful product. We would love to see it also come in 2TB capacity in order to suit users who want to use increased volume. As mentioned, we will be happy to see the price continue to fall. It would be nice to see the SN570 drop below the $ 90 line for 1TB as early as next year.