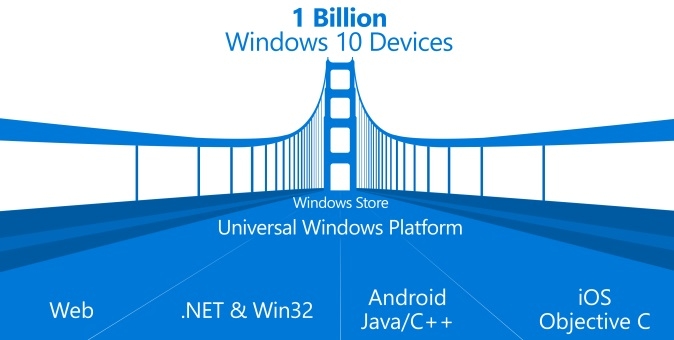 One of the most juicy news coming out of the Microsoft Developer's Breeder's Conference in San Francisco is that the next generation of the Redmond OS, Windows 10, Will support Android and iOS apps. It's not as simple as it sounds, but if Microsoft succeeds in realizing its ambition to attract more application developers to mobile-based devices Windows, It could be just what the shaky ecosystem of the E-Windows Phone needs it.

Microsoft has mostly considered and neglected the idea of ​​running the code written for competing platforms, or at least for Android, emulation, and instead created development interfaces designed to make the conversion of an Android, iPhone or network app Windows 10 is easy and fast. The development versions of these tools were actually tested by companies such as King, whose sweet 3 sweet spot, Candy Crush Saga, arrived in December for Windows phones: Microsoft Office, This version of Candy Crush has been converted from theiOS Of the game without it having to undergo fundamental changes.

Android developers will be able to continue using Java and C ++, and iPhone developers in Objective C, with Microsoft providing them with alternatives to any vital code library they receive from Google or Apple, with the necessary expansion to talk to Windows and use all its capabilities - tile support, access For Xbox Live andCourtney and so'. Like the symbol of the city where the conference was held, Microsoft Office Sees these development interfaces as "bridges" that will connect developers to its platform.

The desired result for Microsoft: More developers will bring their successful games and applications from the rich Android and iPhone shops to Windows devices; More quality content will attract more customers, and increased store revenue will ensure that developers stay there and not run away after one attempt and leave unprotected and unsupported versions of their works, a unfortunate situation that suffer from phone applications Windows Too many today.

The move is interesting and in some ways brave - Microsoft admits here the dismal state of its app market but declares it has no intentions of surrendering; Success, of course, is not guaranteed. Will app developers in sufficient numbers really return to windows? And if the situation improves quickly enough - Microsoft has set itself a goal of a billion based devices Windows 10 in three years - so they have a reason to stay there this time?