We know that the company AMD For example, there has been an extensive improvement in the quality of the crumbs with which certain processors are being marketed, although it still leaves much room for third-party manufacturers to improve the performance of the temperature and especially the noise over the cooling in the box. We know my employer Intel Many today do not come with Cooling Generally, simply because you purchase the Tray version or the non-cooling Box version.

The veterans of you probably know the Swiss cooling manufacturer Arctic. It has been with us for many years when it offers cheap and high-quality replacements for processor coolers. Her name in fact was built using those pocket-friendly and quiet-to-ear coolings. 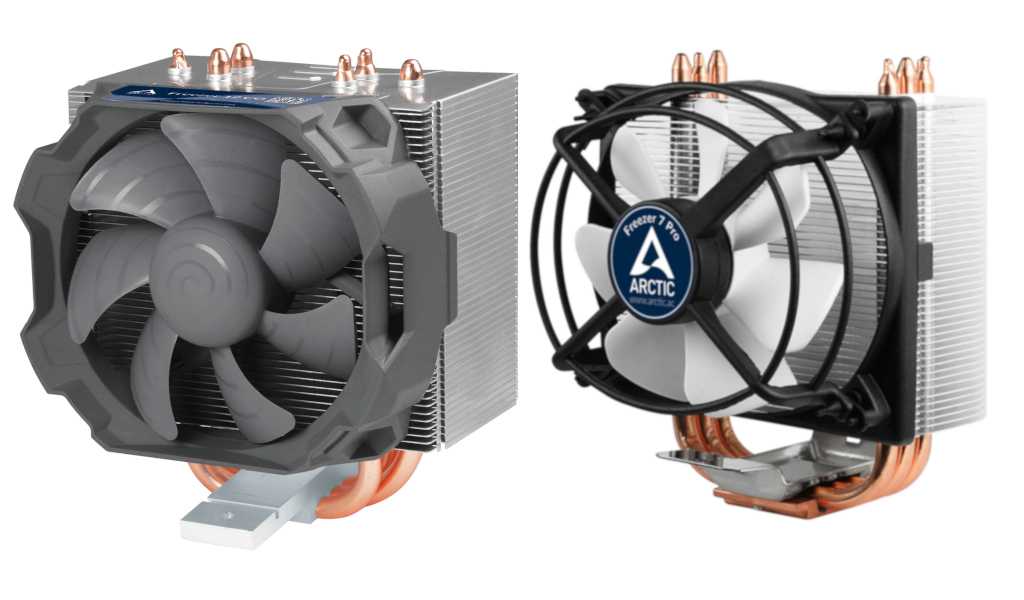 The Arctic Freezer series is probably the oldest in the world of processor coolers that is still being offered on the shelves. The Freezer 7 is Cooling A tower that became very familiar in the various computer stores due to the good relationship between cost and benefit in a quiet combination of operation.

In recent years, however, we have been seeing the series expand to additional curbs. In addition to the Freezer 7, which has already received a number of Roisias over the years, the Freezer 11, 13 and Freezer 33 have also joined the example, which until recently constituted Arctic's top bid for those who want a tower Cooling With four copper pipes.

In honor of the summer, Arctic decided that it would continue to renew the same line of cooling and upgrade the cooling capacity of the 150 category with the Freezer 34. Cooling It also comes with four copper pipes but is better engineered and also includes a new series fan. 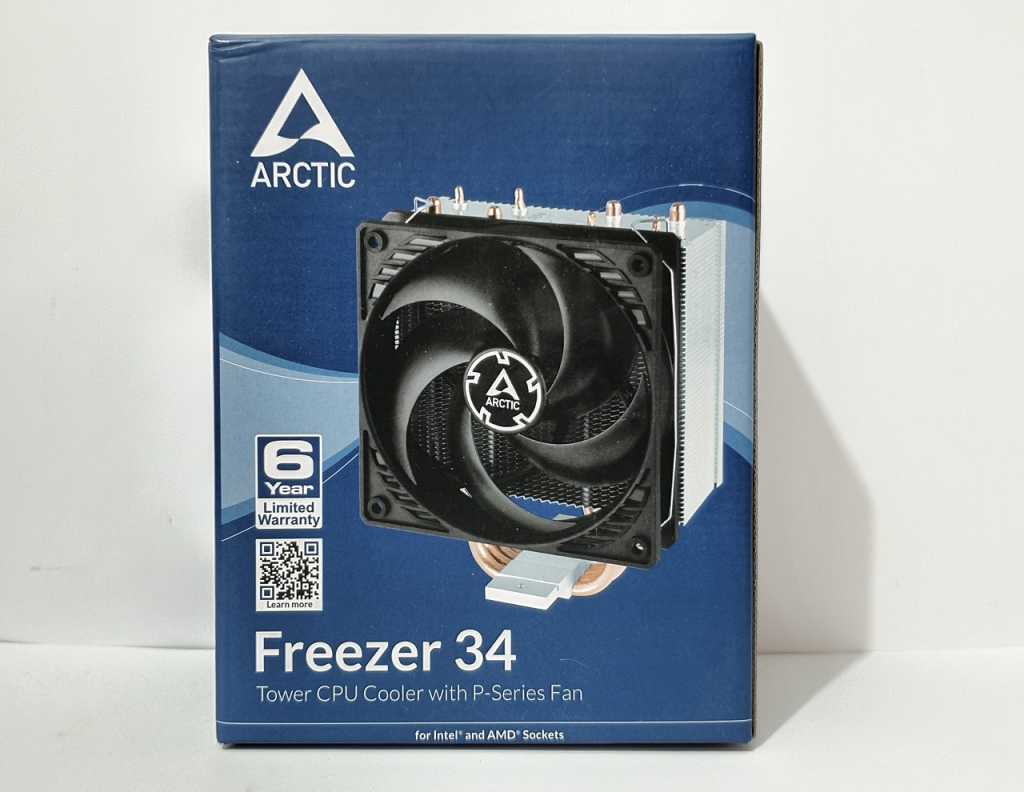 Arctic's Freezer 34 comes in many versions. When asked which I prefer? The answer was simple - "cheapest please". After all, at exactly 150, the heat sink along with a single fan is a good option for those looking for " Cooling For a hundred shekels, but maybe a little more if it's really good. "For cooling, this is a version called CO which is just a gray fan, and a version called eSports that comes with different colors in NIS 170, and also an eSports DUO that comes with two fans and different color schemes but with a tag The price of NIS 175 is not a big addition for another quality fan. 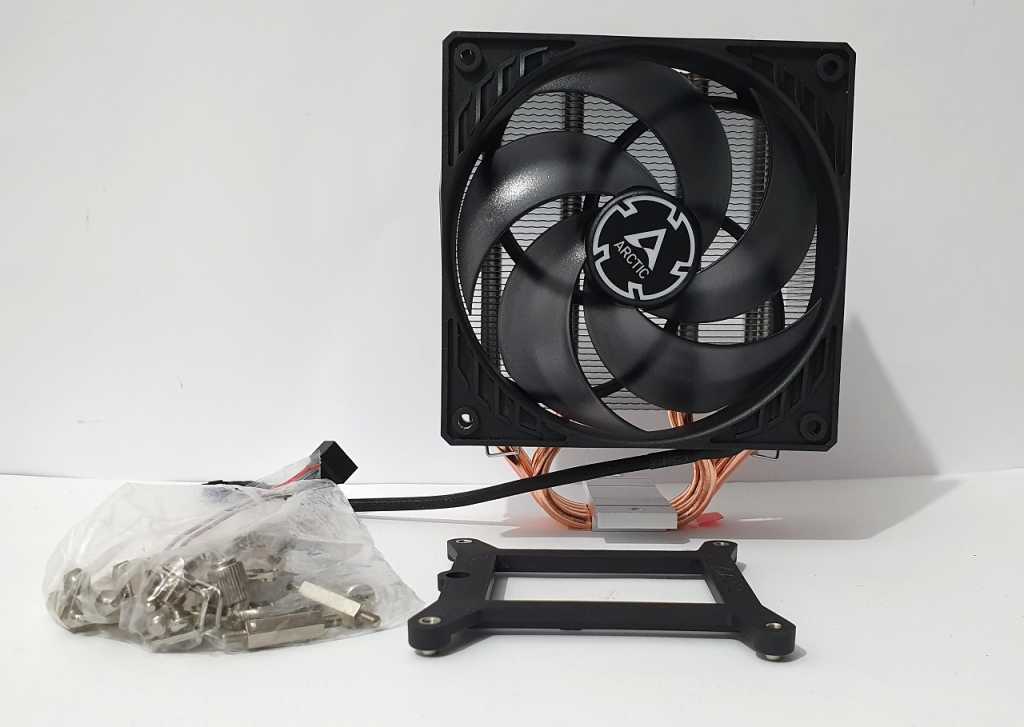 In the package comes the heatsink, various mount docking kits and MX-4 paste, which is sufficient for single installation on larger processors, and can hold two installations for small-area processors.

The Freezer 34 is mostly suitable for mainstream residencies today, including Intel's LGA115X and AM4 AMD. Please note - there is no official support for standard AM3 or LGA2066 brackets in standard mooring, and it is not recommended to do so occasionally for heat emissions. 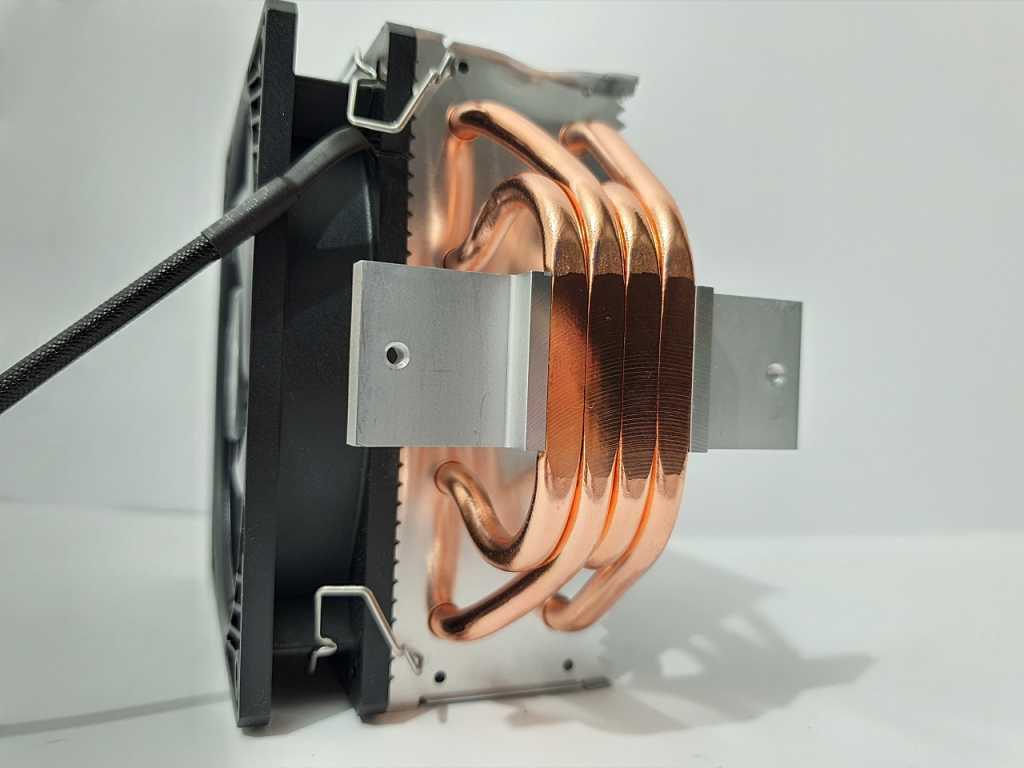 This cooling tower is built in a simple, efficient and time-proven way that works. Four copper tubes are attached to the bottom of the cooling base. Each such tube contains a composition of gas evaporating at a temperature lower than that of water, and its movement while heating the processor allows the heat to be efficiently distributed to the many aluminum fans scattered to the height of the tower. From there, the function of the fan to remove the heat on the outside of the tower used in the air area. This means that the lowest processor temperature will always be close to the zone temperature as a minimum. 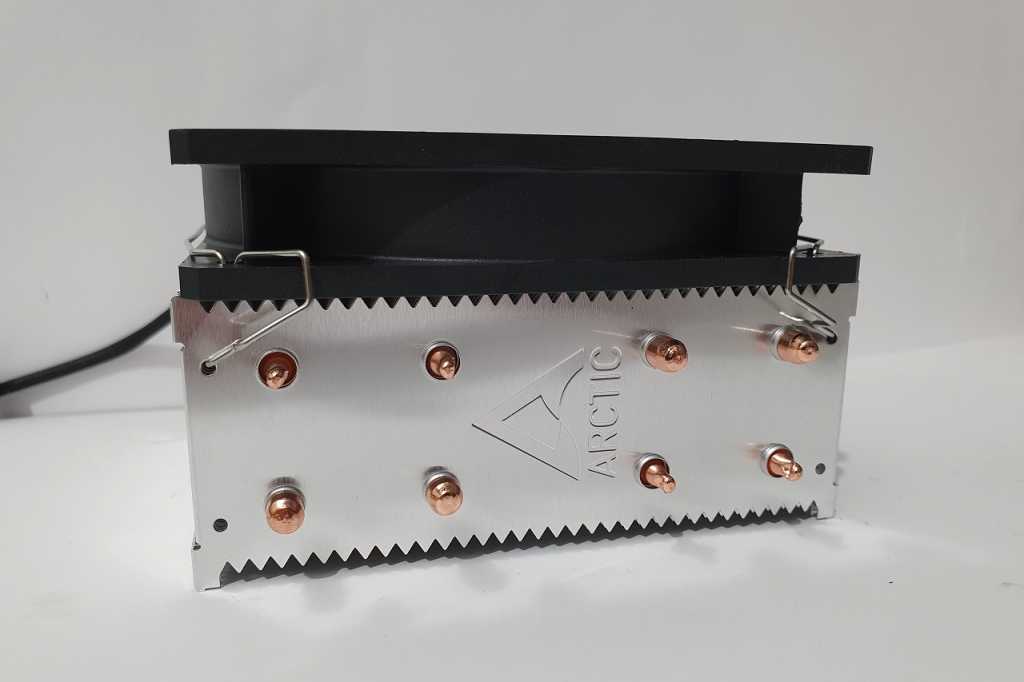 Unlike past designs, where the pipes were fairly concentrated along the cooling and in the head, it was decided to disperse them at a respectable distance from each other in order to achieve greater efficiency than the air passing through the fans. This means that heat dissipation is performed more efficiently than previous generations. 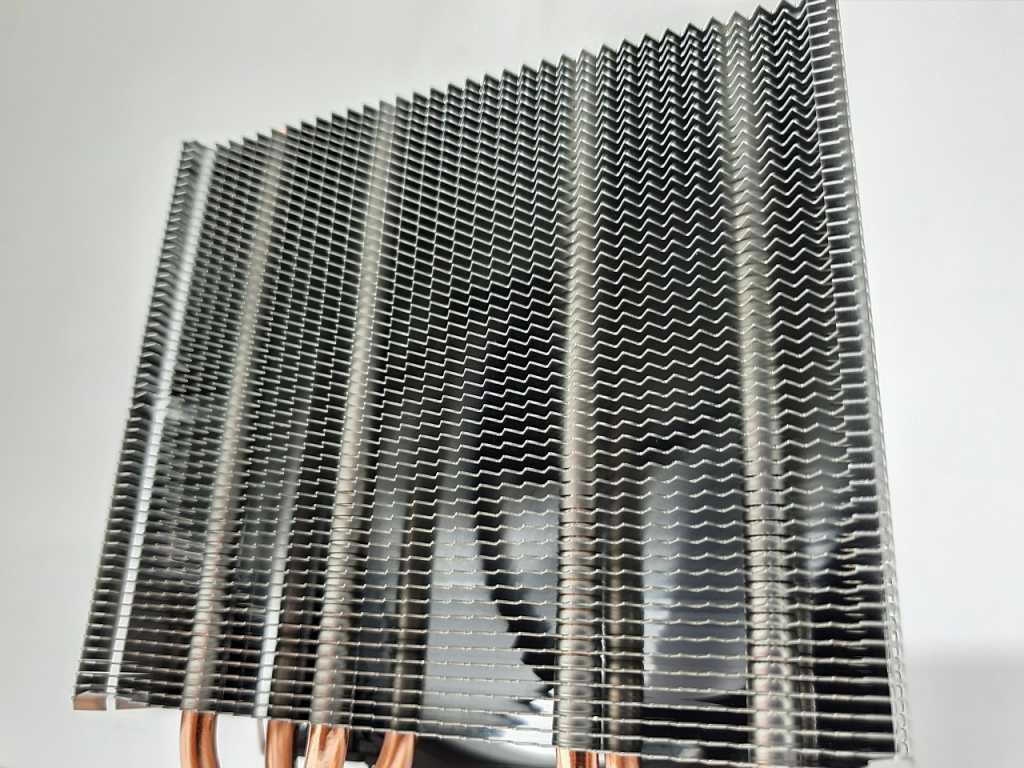 The fans themselves are identical on the surface and in the position, and contain a kind of incision at the end. Here too there is a game of surface area, although the effect of such a thing should be relatively minimal. 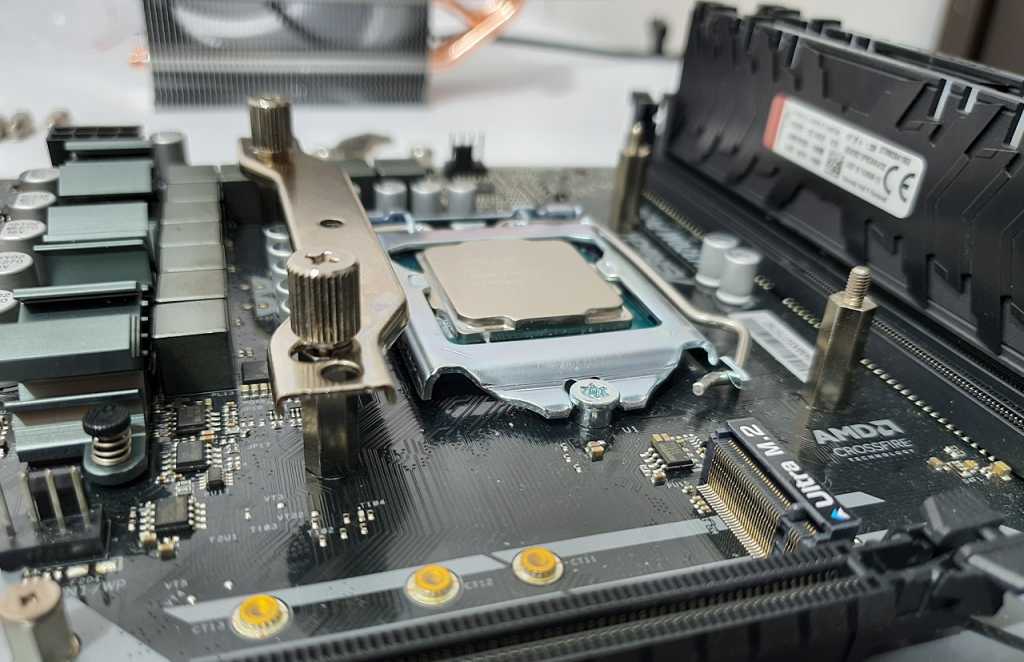 We checked the cooling system Intel. The docking kit that comes with the Freezer 34 is made entirely of metal parts which is a nice improvement over the plastic parts we were used to getting in the past. Except for the plastic rear mooring cross, everything else is metal. The procedure is quite simple - the four double-sided screws must be screwed into holes in the cross, let the cooling down, and then secure the bridges. Another method is to secure the bridges on a cooling basis ahead of time, then just place everything on the processor and secure with the thumbscrews: 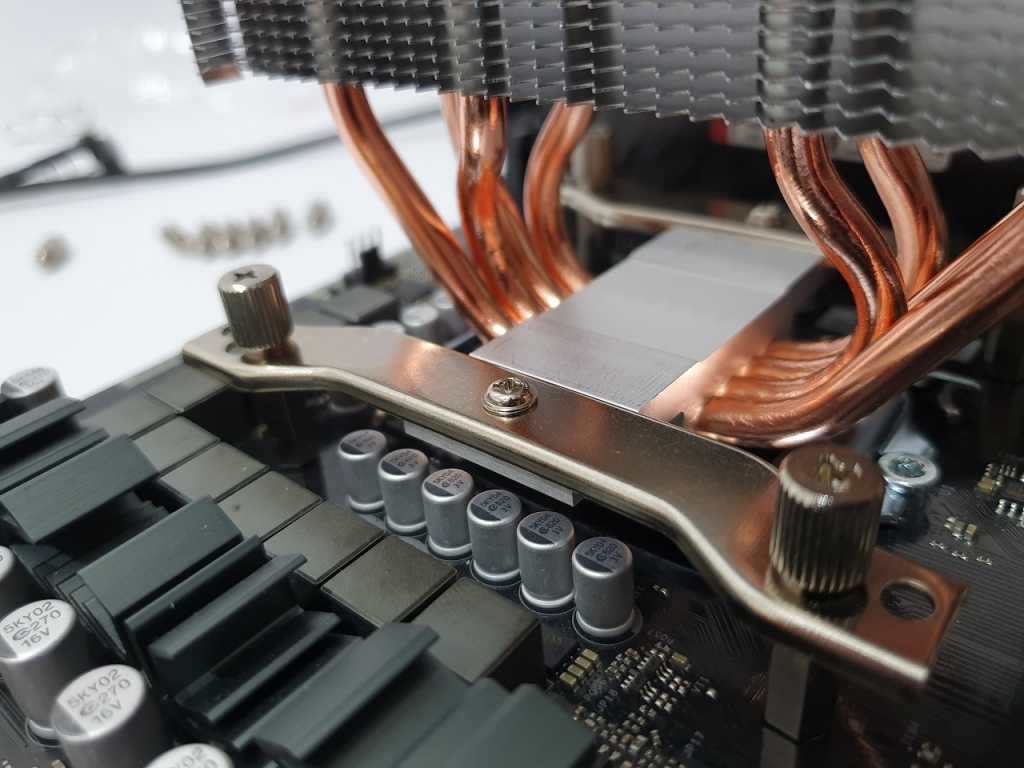 In relation to the 603 gram only cooling, this is one of the most secure systems I've ever seen. Weight distribution is good between the different points. One note about the docking kit - I'd love to see rings for the bottom of the screws to protect the motherboard itself from scratches. Make sure the back cross is inserted "to the end" before applying force to the two-sided screws that secure it. 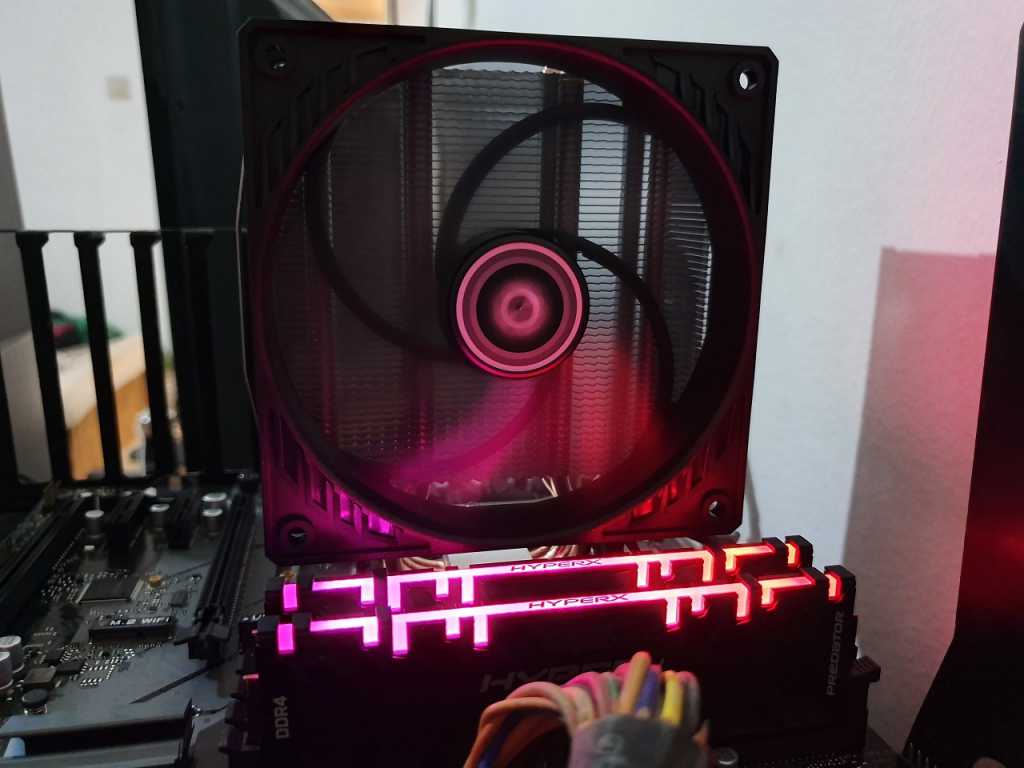 The height of Cooling This is an 15.7-centimeter and will recommend checking the compatibility of the various packages so that you do not encounter the situation when the side door does not close after installation. The cooling temperature of a single fan is only 8.6 centimeters and there is no problem at all with compatibility זיכרון Standard motherboards such as standards ATX And MATX. Using low memories will ensure compatibility even with small MITX boards.

The 34 Freezer Arctic We examined two different power states from his processor.

No video card is used or any other component that generates noise in the system other than the power supply, which also worked in passive mode, meaning that the ventilator did not work during the test. We decided with our noise meter to perform noise normalization environment of exactly 30dbA from a distance of 30 inches and see how heat emission deals with the 34 Freezer. This type of test mainly examines the efficiency of the heat sink, the combination of noise and temperature.

To the performance tests we also threw the Noctua U12A, Cooling At a cost of about NIS 400, as well Cooling Freezer 7 Pro at a cost of ILS 120 so you can test upgrading in this way. The room temperature during the test is 25 ° C. 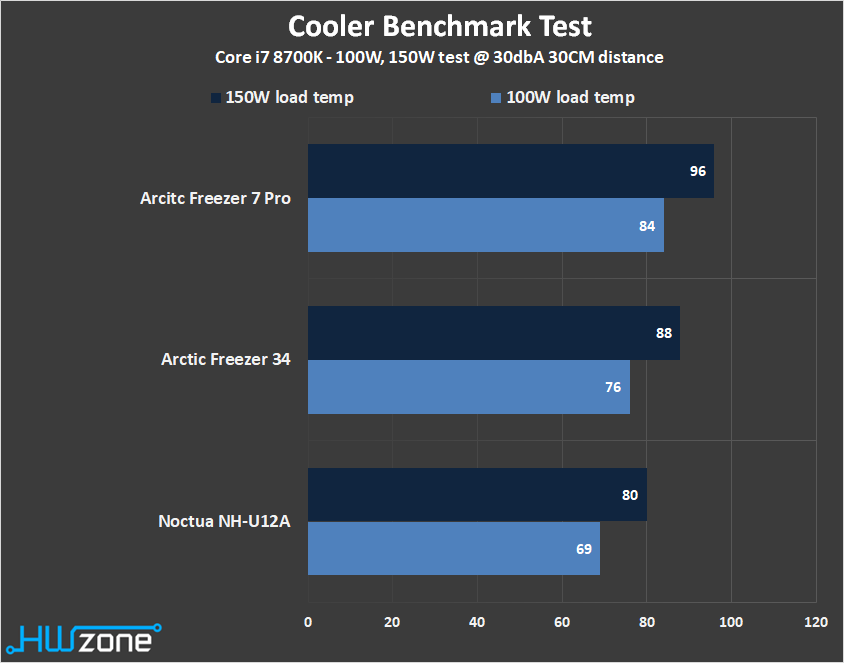 I remind - Cooling In ILS 120, Cooling At NIS 150, and cooling at almost NIS 400. Weak marginal productivity is a key concept in the cooling world for processors and here we can see it in full effect. As the challenge of getting rid of heat becomes difficult, we pay for it.

With a respectable temperature difference from its smaller brother, and indeed such a reputable top end of the world of cooling engineering, the Freezer 34 presents a really simple cost-benefit ratio. Its P12 fan is very efficient in pushing air to a given noise. If added Cooling In return for a little more noise, the two-fan version of 25 would probably be worthwhile, especially considering the standard cost of 40 for this fan.

If you purchase the basic version, the docking kit comes with clips that allow for additional docking of the 120 fan. Of course, if the fan is spoiled, its replacement is a simple and inexpensive procedure, so cooling maintenance is definitely possible in the future. 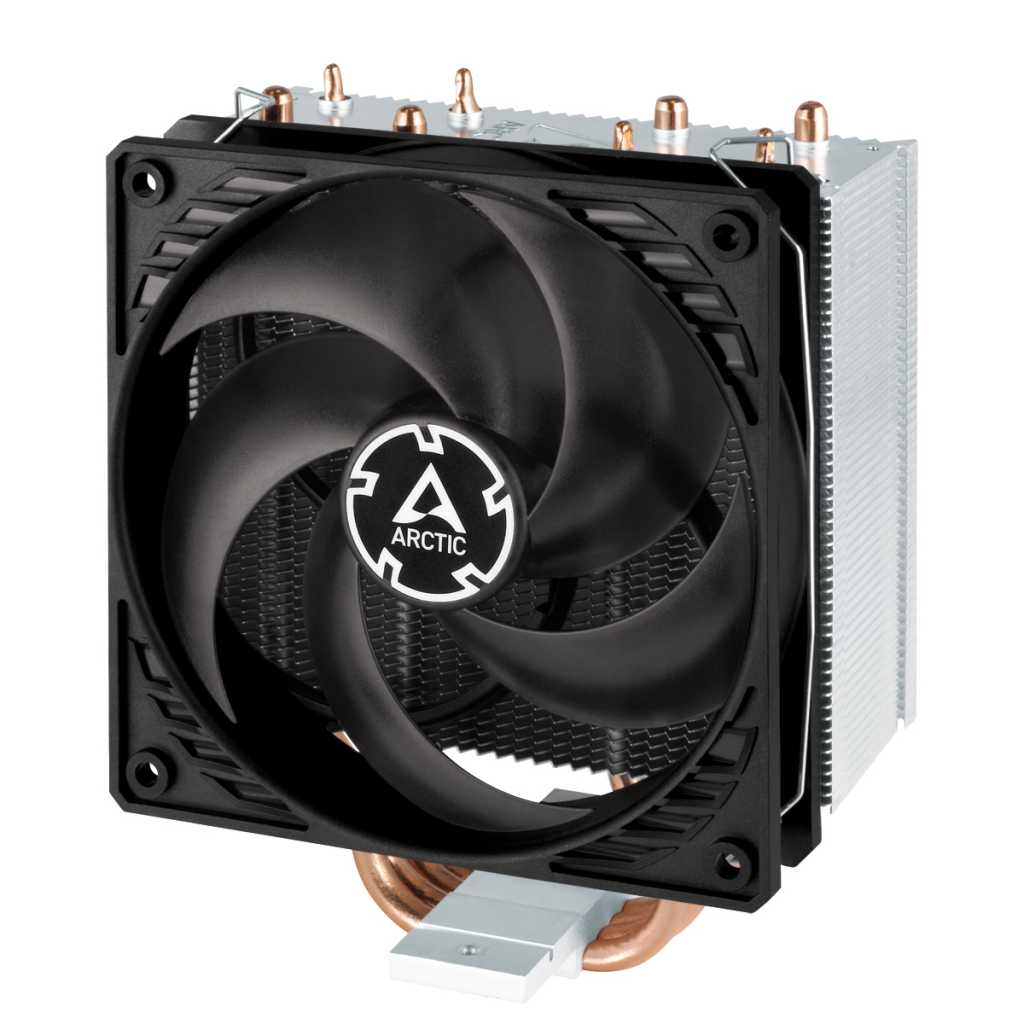 In conclusion, I am very happy with the product of Arctic. I think that there is certainly a worthy return in this important market share that connects the defaults with the huge iron towers. The engineering improvements made by Arctic are reflected in the test and we can definitely recommend the Freezer 34 as a good choice for those who want beyond what the cooling box can provide, or as a solution if it does not arrive Cooling In the box.

We will not rush to recommend it as a solution for monsters such as Core i9 9900K or even i7 8700K, even if it reaches normal temperatures at a simple effort because they are slightly elevated even at room temperature of 25 ° C. True, the locked core cores like Core i7 8700 or Core i5 9500, for example, would be perfect. pillbox AMD, Dealing with a processor like Ryzen 5 2600 or even Ryzen 7 2700 is expected to be fairly easy if not put in Overclocking To the equation.