The drivers, which come just in time for the holidays and the New Year, offer new support for the 5K resolution, support for 24 concurrently, the implementation of Virtual Super Resolution technology, 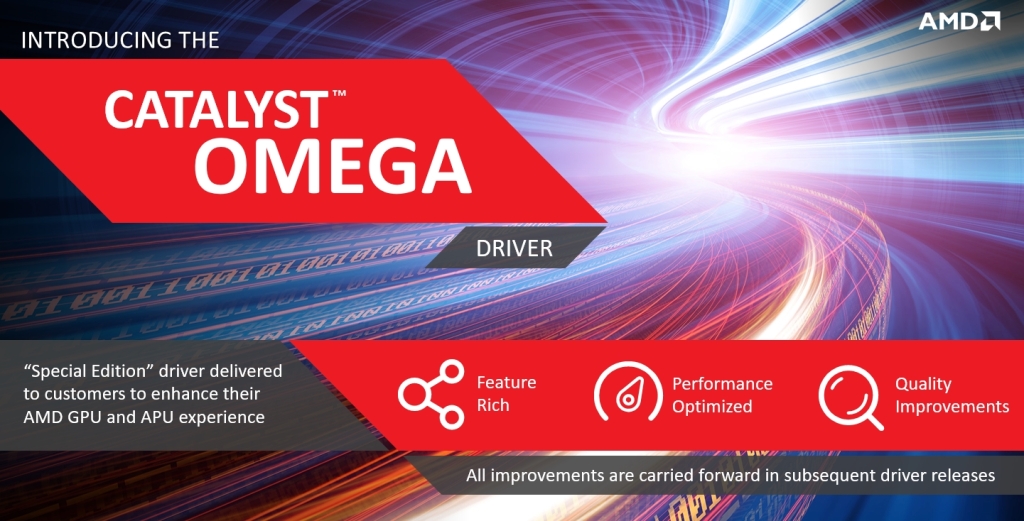 As part of the company's plan to close 2014 with an explosion, AMD is releasing the 14.12 update of its Catalyst driver, under the name "Omega". The update, which raises the driver version to 14.501.0.0, introduces new support for 5K resolution (like Dell's UP2715K screen), support for Alienware Graphics Amplifier that has so far only been supported by cards NVIDIA, New technologies in the field of video (AMD Fluid Motion, FreeSync), improvement in the performance of video cards and APU accelerators in a variety of games and of course bug fixes. Let's find out exactly what AMD You're renewing your computer.

As part of the Omega Catalyst drivers update Omega, the company introduces new support in a number of areas, the first of which is resolution. With the new drivers AMD Officially supports screens with 5K resolution (or 2880 × 5120). The support, which will not get much use due to the lack of screens with this resolution and due to their high price (the UP2715K screen is priced at $ 2,500 or about NIS 9,900), but the wider support of resolutions is certainly welcome. Keep in mind that the graphics cards are from the R series of AMD Although they now support 5K resolution, two connections are still required DisplayPort 1.2 for resolution (due to the limited support of theDisplayPort To the maximum of 4K). In addition, the company's eyefinity technology now supports 24 monitors running simultaneously.

Another support that the company brings with the Omega driver is video playback. AMD Introduces two new technologies in the field - AMD Fluid Motion Video - this is a technology that according to the company uses the processing power of the video card, and in combination with the PowerDVD 14 software it improves the playing of movies Blu-Ray, Both in the improved conversion of Blu-ray movies from a source of 24 Hz to 60, and in the overall quality of the video processing and display, which improves the performance of APU accelerators in the field, who have hitherto had difficulty messing with this heavy media. 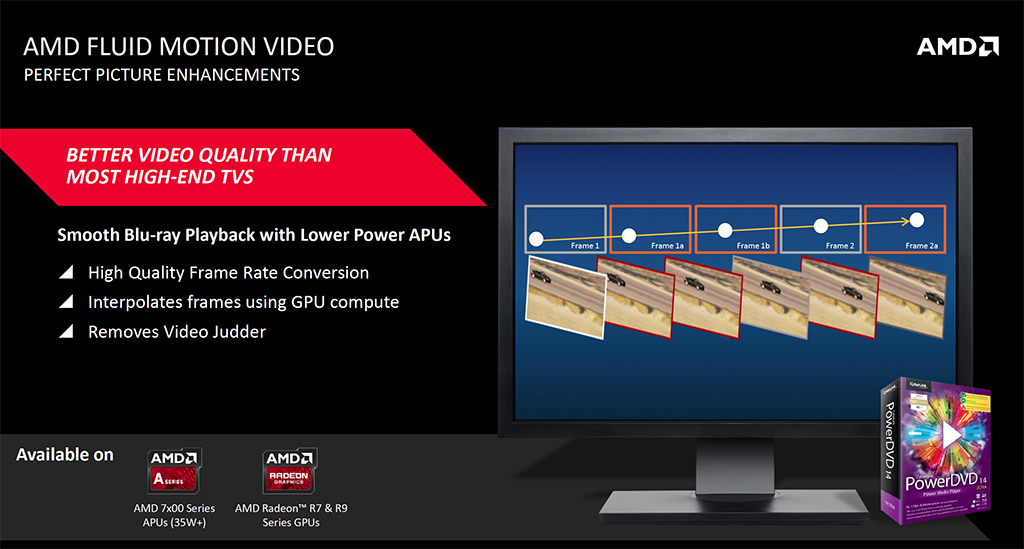 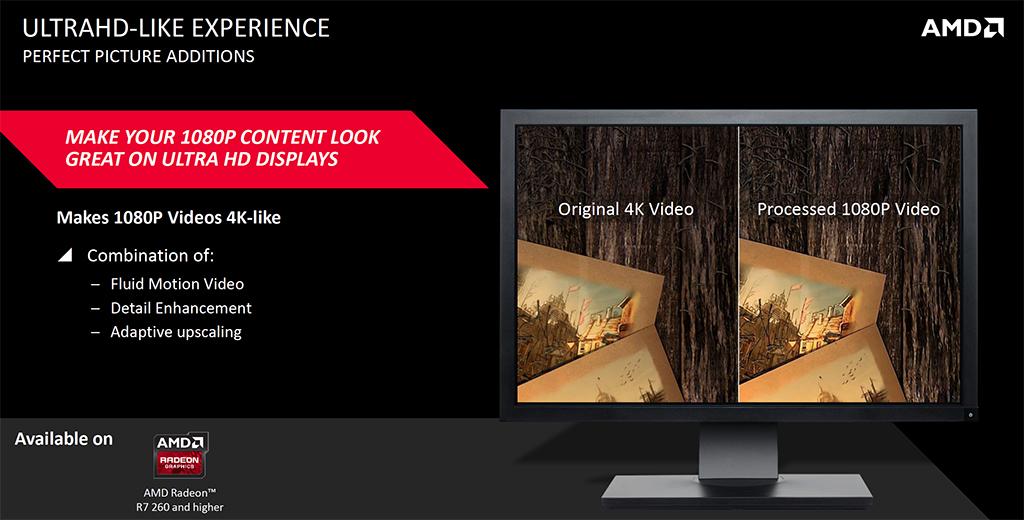 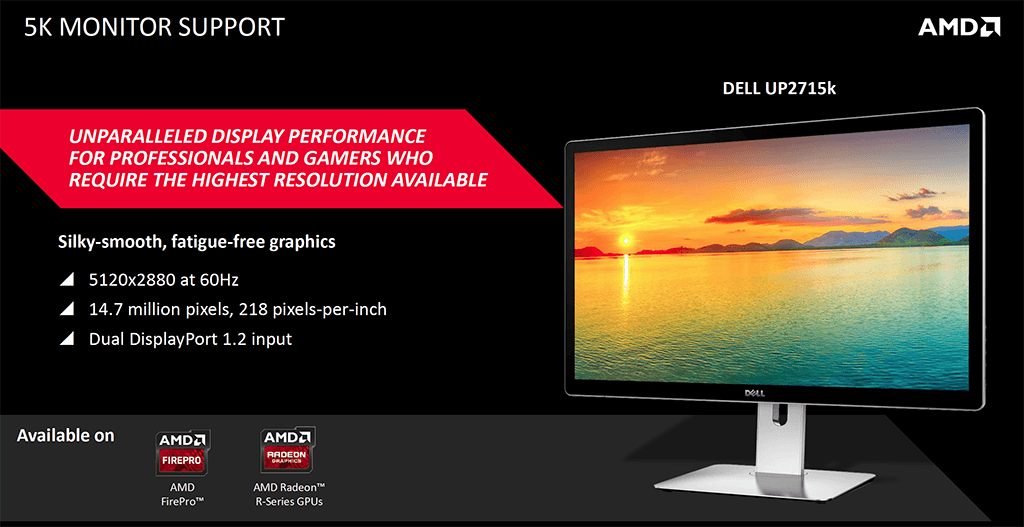 In the gaming field, the new Omega driver AMD Does not stop for a moment. First, the company is upgrading its Frame Pacing method, the same technology responsible for properly coordinating in-game frames and maintaining smooth, uninterrupted graphics, with new improvements to systems with an array of two graphics accelerators in parallel (for APU accelerators and graphics cardsRadeon Or higher of the Company). These improvements are valid for Batman Arkhan Origins, Metro Games, tomb raider, Sniper Elite 3 and more.

Another technology thatAMD In the field of gaming, virtualization is the technology of Virtual Super Resolution. Technology This (which is an answer to Nvidia's Dynamic Super Resolution technology) uses the graphics processing power of a computer capable of running a particular game at a higher resolution from the screen to which it is connected (support for R9 29X and R9 285 cards), thus processing the game at a higher resolution and then displaying at a resolution Lower, which should raise the image quality and display more detail.

In addition to new technologies, AMD Features improvements in its video cards and APU accelerators with increased performance (compared with 13.12 Catalyst drivers) graphic cards Over ten percent in games like Batman Arkham Origins, BioShock Infinite, Call of Duty: Ghosts and more. The improvement in performance in the company's APU accelerators ranges from five percent to twenty-nine percent in those games, a noticeable increase in performance since the Catalyst driver in version 14.2. 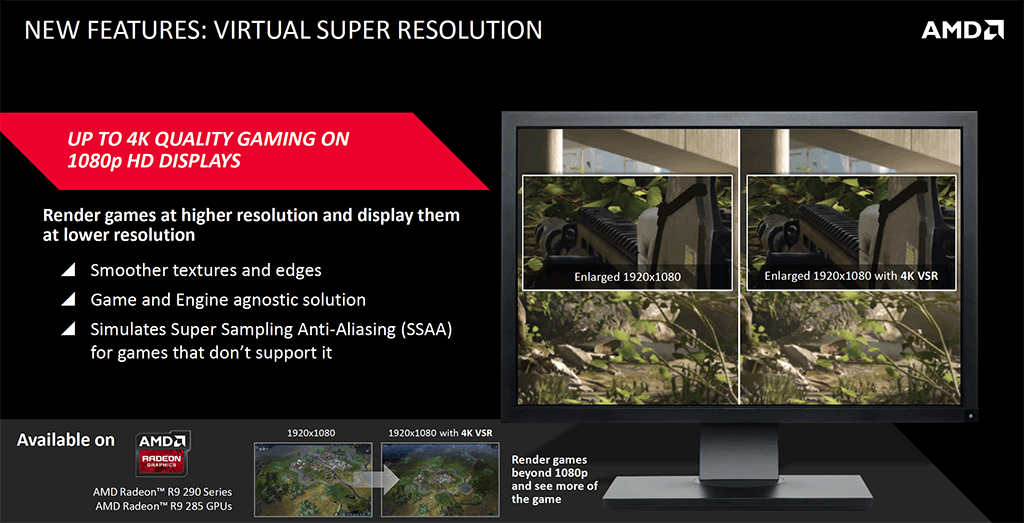 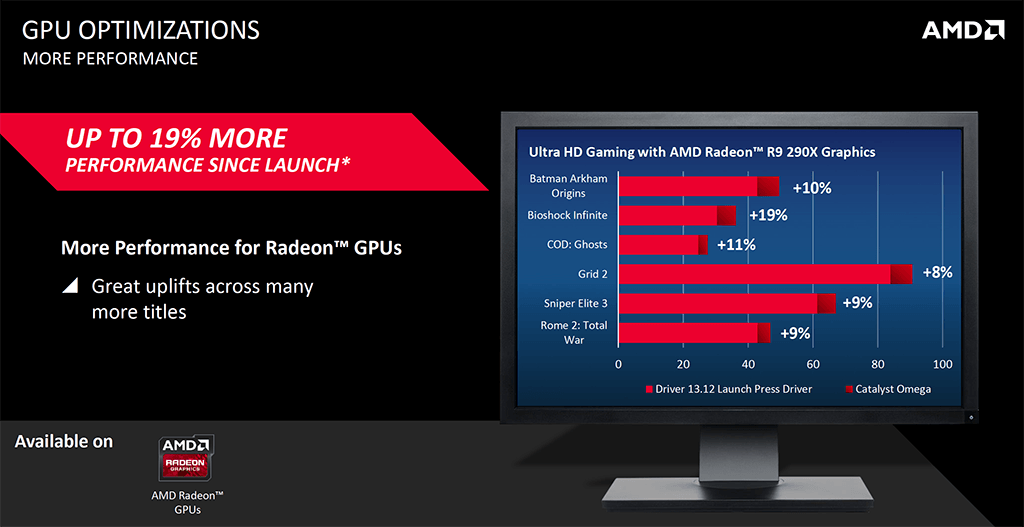 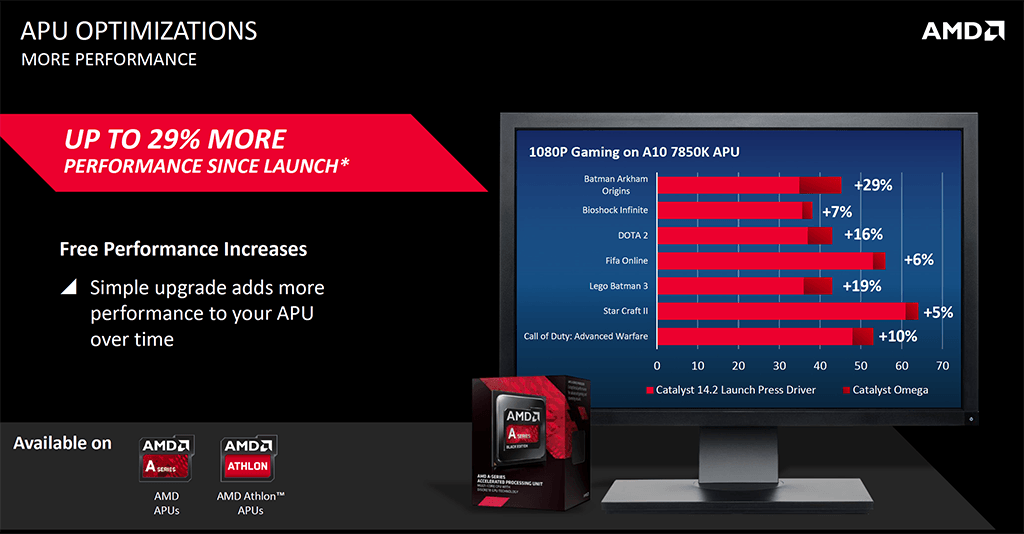 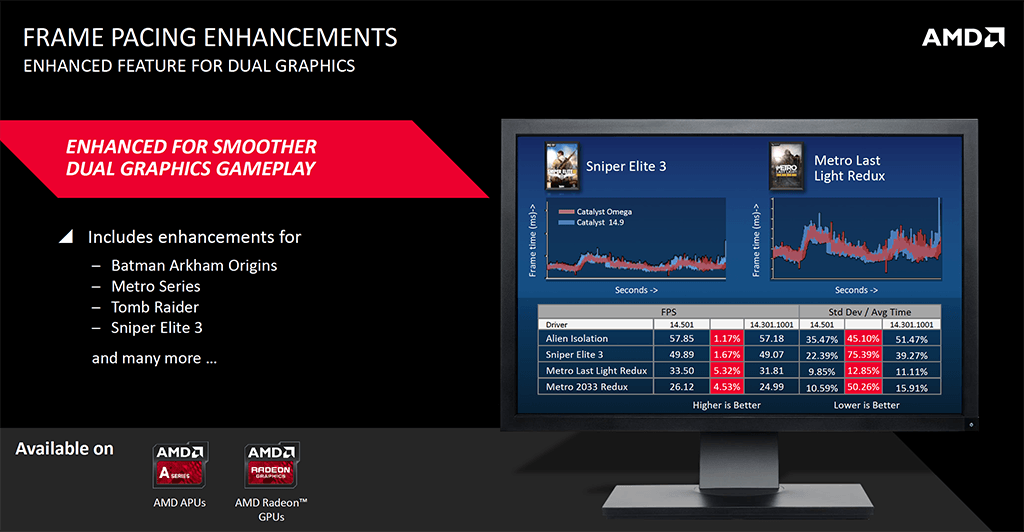 Besides improving ticket performance, AMD Reiterates OpenSync's OpenSync technology, which builds on the DisplayPort Adaptive-Sync standard and aims to synchronize the screen's refresh rate with the graphics processing rate of the game. The same standard allows the technology of AMD (Equivalent to Anodia's G-Sync technology) to be almost every modern screen with the support of DisplayPort's global standard, which makes anodia a major blow to the price and use of technology. AMD Also takes care to note the support of Samsung With FreeSync technology, with screens 4k In sizes 23.6 ", 27", 28 "and 31.5" that will be released in 2015.

A new field in it AMD It supports external graphics accelerators. Alienware's graphic amplifier technology, which offers a significant improvement in notebook performance by using a desktop video card for additional processing power, has so far supported only Anodia cards. With its new Omega drivers, AMD Provides full support for the external graphics accelerator,Alienware 13, but will support most computers, and even become (hopefully) some standard in the field. 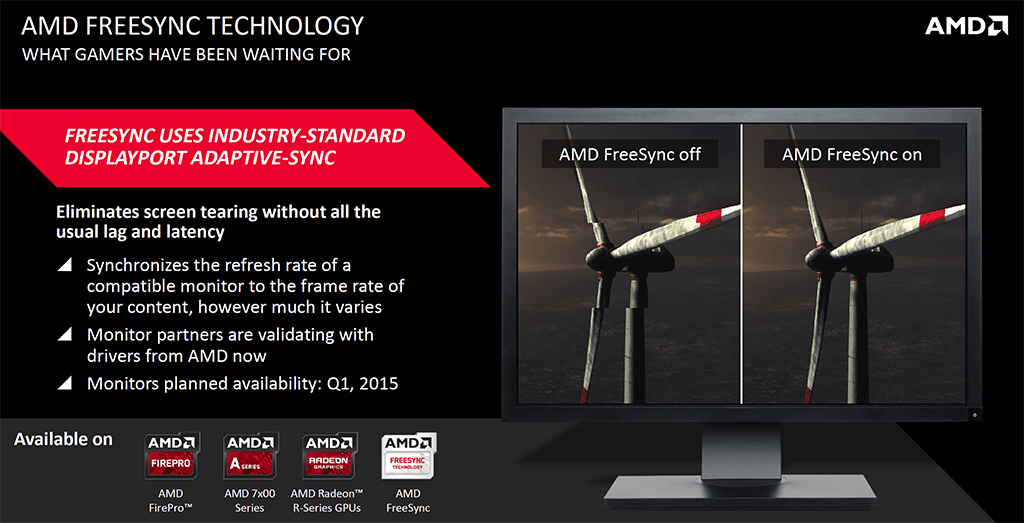 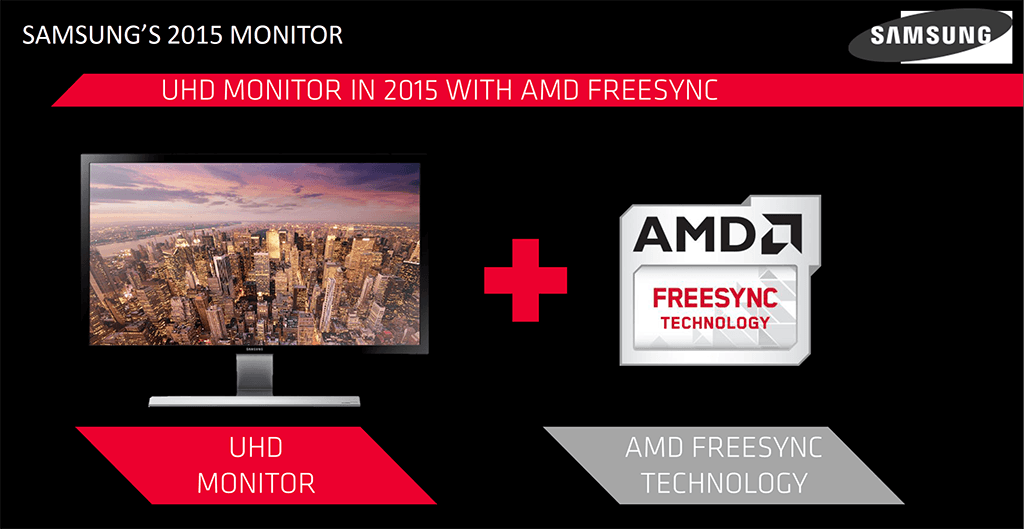 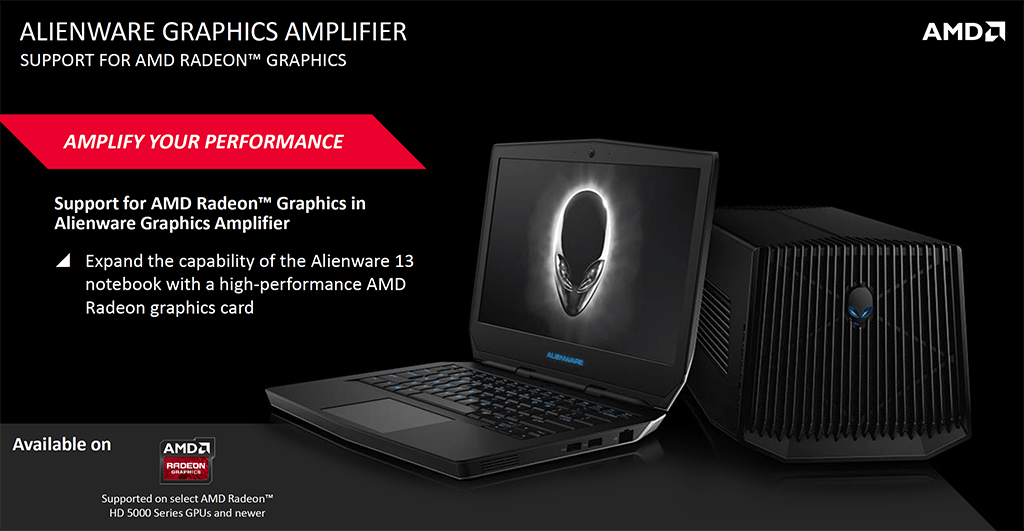 And finally how not, bugs. From a screen in a Quad CrossFire array to screens that do not wake up, AMD We are very happy to see, especially with the many enhancements we have received with the company's Omega driver.

So what did we get from AMD's new Omega driver? In addition to significant improvements of up to ten percent in video cards and up to 30 percent in APU accelerators in a variety of games, the company has taken care to bring to the card significant technologies that are very relevant to our time. Smarter use of the graphic power of our device, even in the absence of a monstrous resolution screen, AMD Makes sure that as many of its users enjoy the benefits that its graphics cards can bring to millions of users and gamers around the world.