We took one of the best and most prestigious motherboards Asus, The X99 Deluxe. Let's see how to do extreme right

Intel's new high-end chassis, the LGA2011-v3 was launched recently. With her, was also launched The most powerful desktop processor of its kind And two little brothers to him.

The purpose of the Extreme Platform is to provide the hungry end-users of the PC market. More זיכרון, More processing power, more options. The LGA2011-v3 chassis enables motherboard manufacturers to demonstrate their most advanced engineering capabilities.

Today in the review, the Asus motherboard is the highest model in its mainstream series, the X99 Deluxe. Asus's mainstream series is the cheapest among its series, but it also has more advanced models. This series is not intended for a particular niche of these users and is intended to accommodate as many audiences as possible, whether content creators or Gamers. 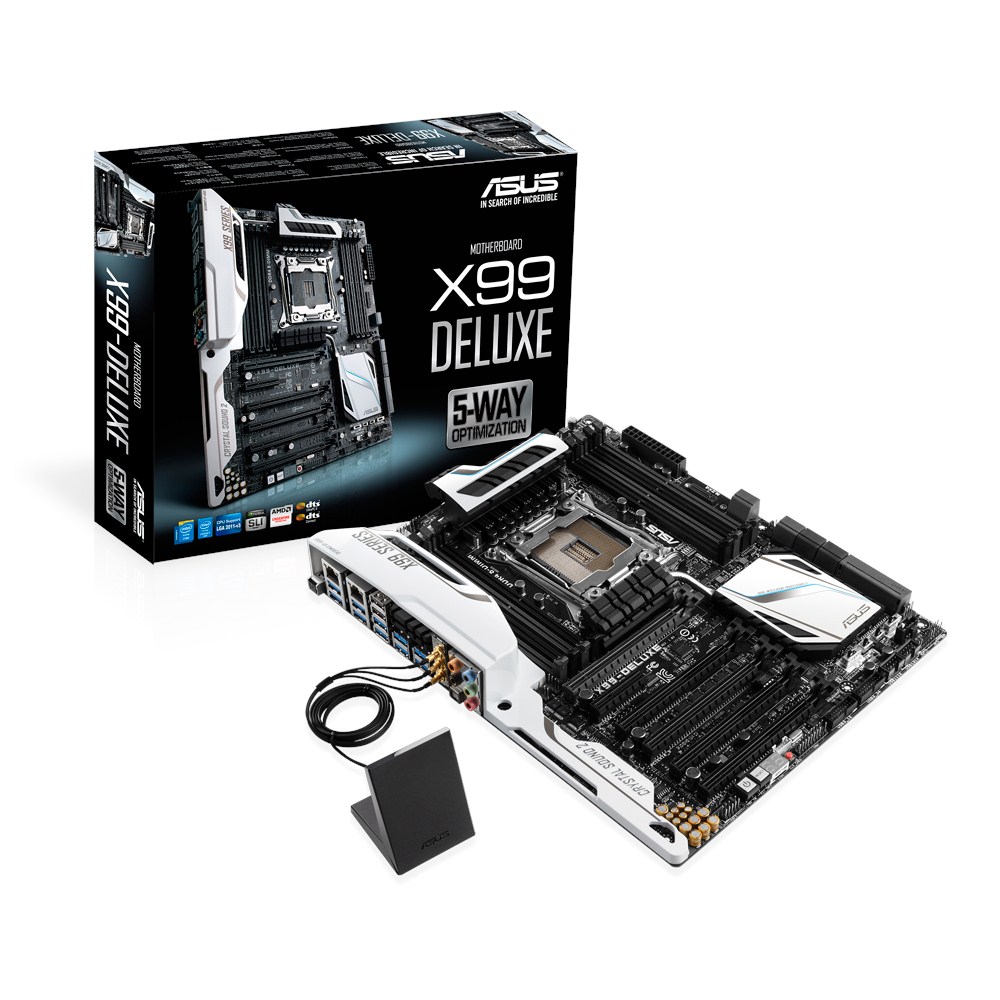 The X99 Deluxe was created to be stacked to zero in interfaces. It carries a price tag of NIS 2100, which puts it in a rather high market place, with the budget motherboards in the socket being found in 1200 and the most expensive in NIS 2500.

It's hard to say who the deluxe competitors are, since every manufacturer seems to have taken its product lines elsewhere. One thing is certain, that the X99 Deluxe is unique.

The packaging of the X99 Deluxe is simple and includes information about the technologies you will find. Among other things, the OC Socket technology I will touch later on.

With the motherboard you get one of the most impressive sets I have seen. Before all, there are the constants - eight SATA cables, a rear IO panel for the chassis, two SLI bridges and three graphic cards של Anodia, Package sticker and instruction booklets. 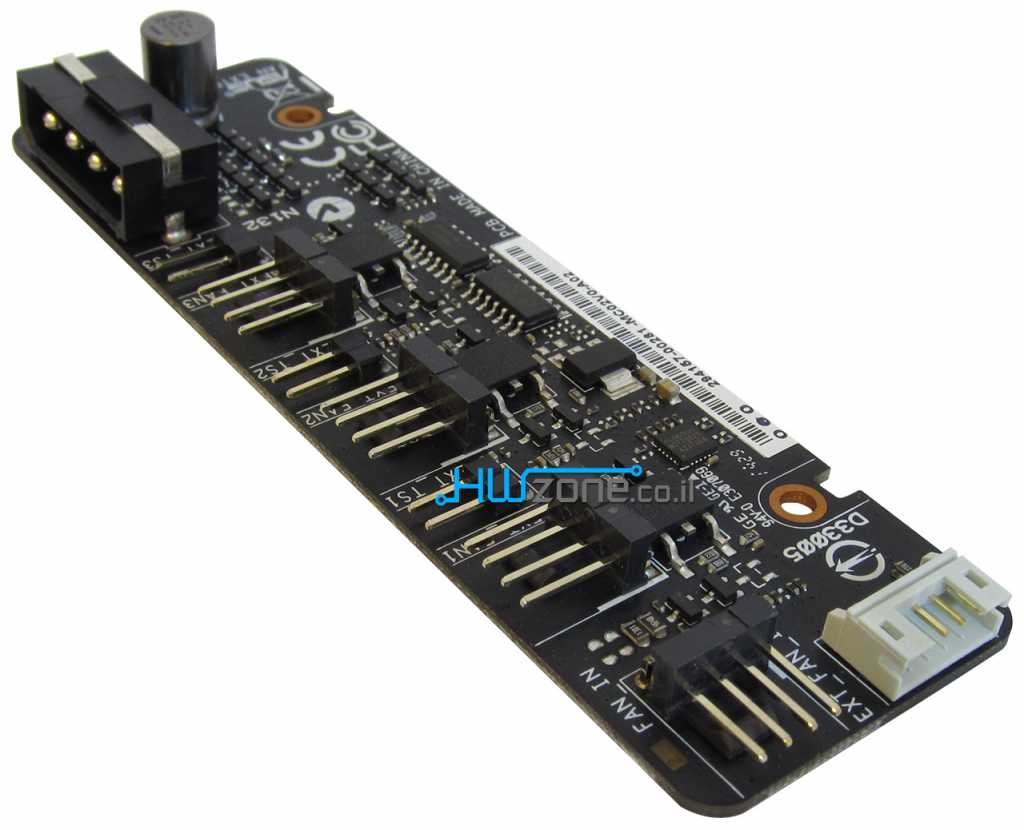 This small printed board is actually a fan controller and sensors. This controller is connected to the motherboard and electricity, and it is possible to connect three temperature sensors and four fans and it can be monitored and configured in BIOS and software Asus. This makes the selection of the X99 Deluxe a bit more rewarding for those who intend to install it in a case where the fan control is reduced and insufficient. The controller can be especially useful for systems that require many fans, such as those that are used in water using large radiators. This is an excellent addition to the board. 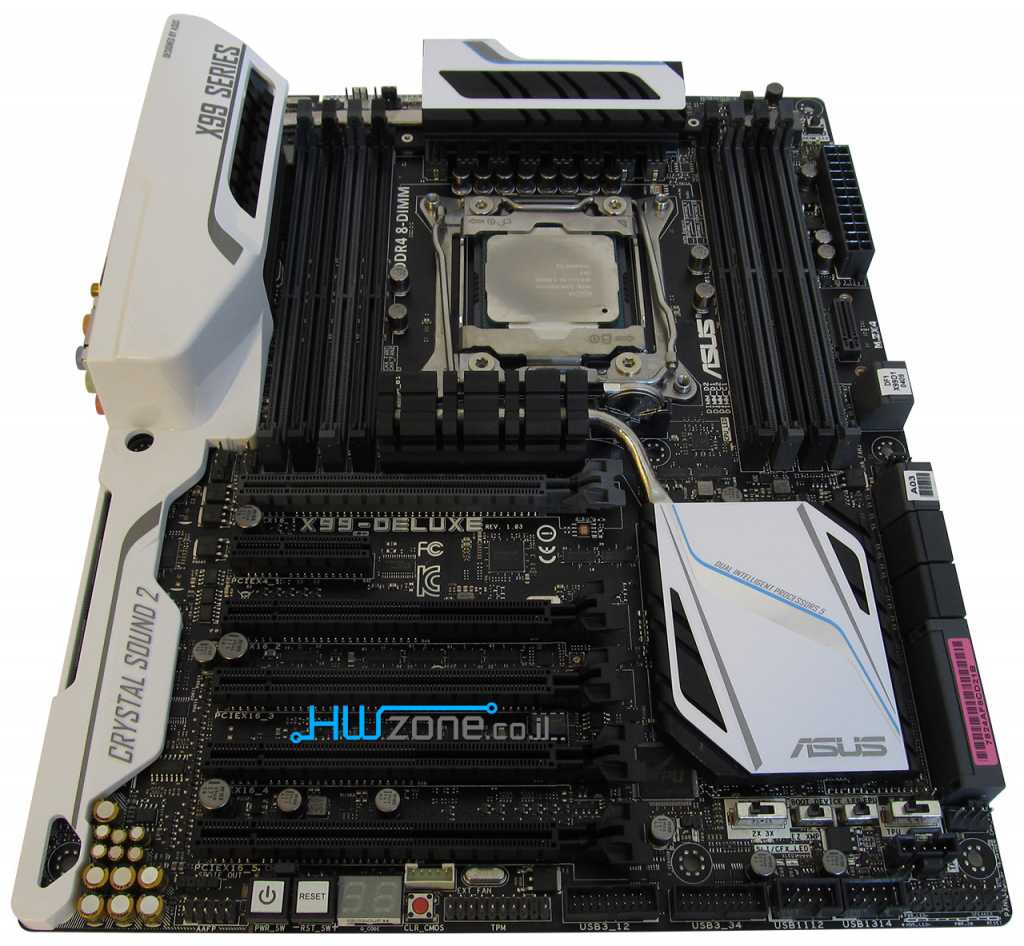 This is the X99 Deluxe, one of the Asus flagship ships in the LGA2011-V3 chassis and a good reason for their pride. Visually, the X99 Deluxe brings a completely new design line that includes black and white. This approach was adopted by Asus to another Which received positive and strong feedback The idea of ​​going black and white, andLooks like lately Black and white becomes a very popular color scheme. The left part of the motherboard is completely covered with a plastic panel. It passes over parts that have low heat emission and therefore does not constitute interference.

The chipset, the X99, is covered with an aluminum cooling body with white cover. This cooling body is connected by a copper tube to another body that drives the heat dissipation. The heat envelope of the X99 chip is the lowest of the maximum extras Intel So far contained, 6.5 watts only. For comparison, X79's heat envelope is 7.8 watts and X58 is 24.1 watts. This allows manufacturers to use my body Cooling Fanless. 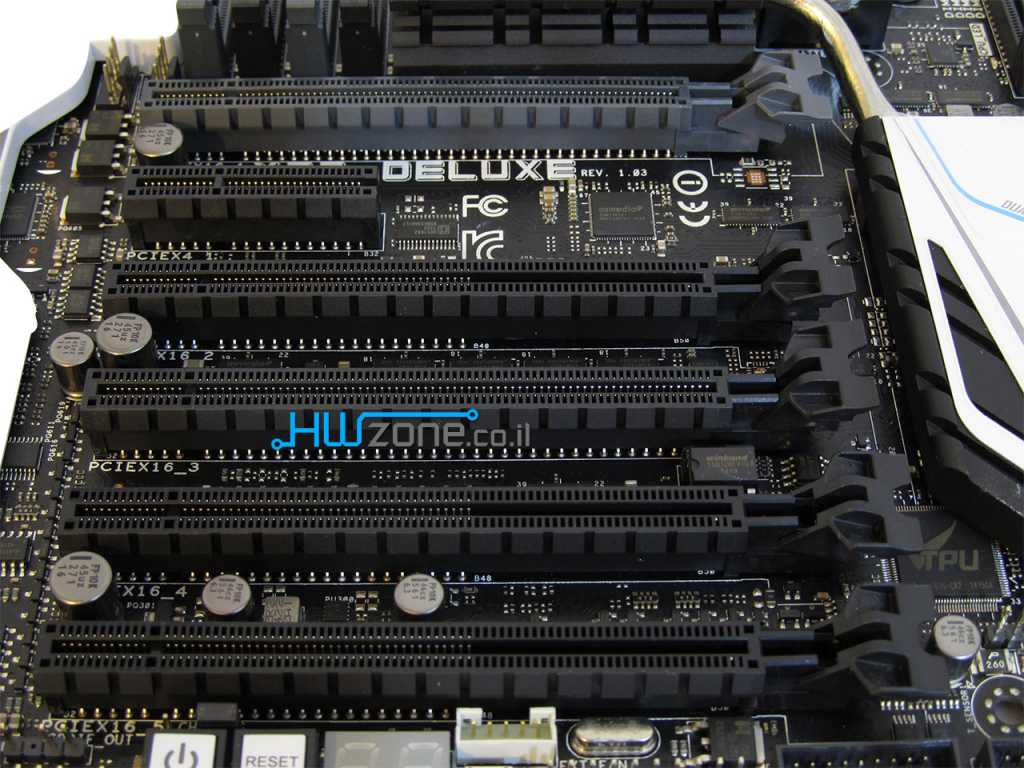 The X99 Deluxe carries six expansion interfaces, all PCI-Express. The first from above will always find an X16 speed. If you use a processor that has 40 PCI-Express paths, using the first interface from the top and the fourth from the top will result in a configuration of X16 and X16. If three video cards are used, the first, third, and fifth interfaces should be used to produce X16, X16 and X8 respectively. If using a processor with 28 paths such as Core i7 5820K, the partition will be X16 and X8 in second use graphic cards, And three in X8 if three are used graphic cards. 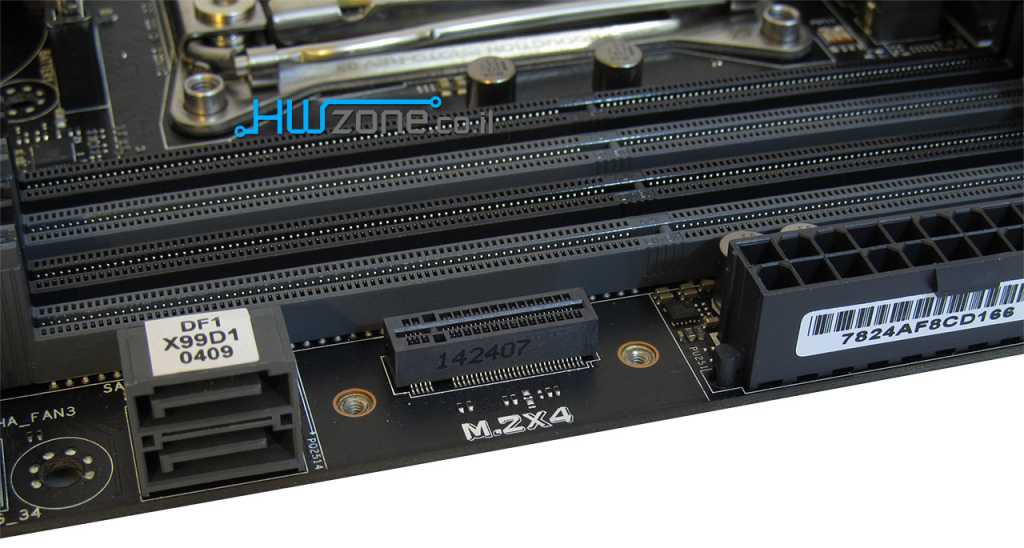 Near the SATA interfaces there is also the M.2 interface for the SATA drives.SSD With maximum data traffic at a speed of 10 Gigabit, compared to 6 only on the SATA3. To save space on the printed board, she decided Asus Having to build high. Thus, using an iron adapter, you can actually mount drives vertically and use an adapter as a support. It's a new approach and I have to admit I like her, she saves space.

Like any advanced X99 board, the X99 Deluxe also includes eight type memory interfaces DDR4. To date, the highest memory capacity for a single stick of DDR4 Is 8 gigabytes but soon are expected to come out of those that carry 16 gigabytes. Therefore, the maximum volume limit now stands at 64 gigabytes, and will soon become 128 gigabytes, a new peak in the desktop market.

The supported memory speed depends mainly on the processor capacity, since the memory controller is in it and the higher quality controllers will bring speed זיכרון Maximum. Basically, support for 2133 MHz speeds will come naturally and without problems. Beyond that, there are also speeds of 2400, 2666 and 2800MHz available today for purchase and compatibility is highly dependent on motherboard, processor and memory models themselves. More about this on the bios page.

In the lower left part of the motherboard is an area that is almost completely separated from the rest of the components. This area is dedicated to Realtek's ALC1150 voice component. Realtek's winning chip also appears on this motherboard, which ASUS has decided to reinforce with an advanced signal that includes, among other things, fine electrolytic capacitors of the Japanese Nichikon. This is the type of signal that is found mainly in advanced sound cards and in devices such as receivers. The separation from the other components of the motherboard enables the filtering and prevention of electrical noises and disturbances. The Nichikon receivers are designed to soften and supply power to the sound outputs on the motherboard. Users speakers Large and high-impedance headphones are the biggest beneficiaries of this technology, which, apart from sufficient quality, also protects against unwanted noise when the volume changes suddenly (like explosions).

These are the back ports on the back of the chassis. As expected, here too there is a good container. There are ten ports USB Unfortunately, all of them come from ASMedia's third party visitor. It was nice to see two of them come in the chipset, only to avoid compatibility if drivers are not yet installed. Both portsUSB The black 2.0 comes straight from the chip system and the existence of such outputs makes me happy, as they ensure maximum compatibility for keyboards and mice.

There are two RJ45 network ports and both are connected to the RJXNUMX network controllers Intel. This configuration enables the connection of the X99 Deluxe to another computer for transmitting information while it is connected to the network at the same time. The right side of this port array belongs to voice and wireless communication. On the right, outputs to 7.1 sound channels with optical and left output are the screws for the antenna received with the motherboard. If two ports Network They are not enough, Asus Also provides communication Bluetooth 4 and WiFi in the fastest ac standard with a huge speed of 1300 megabytes per second (162 megabytes per second). 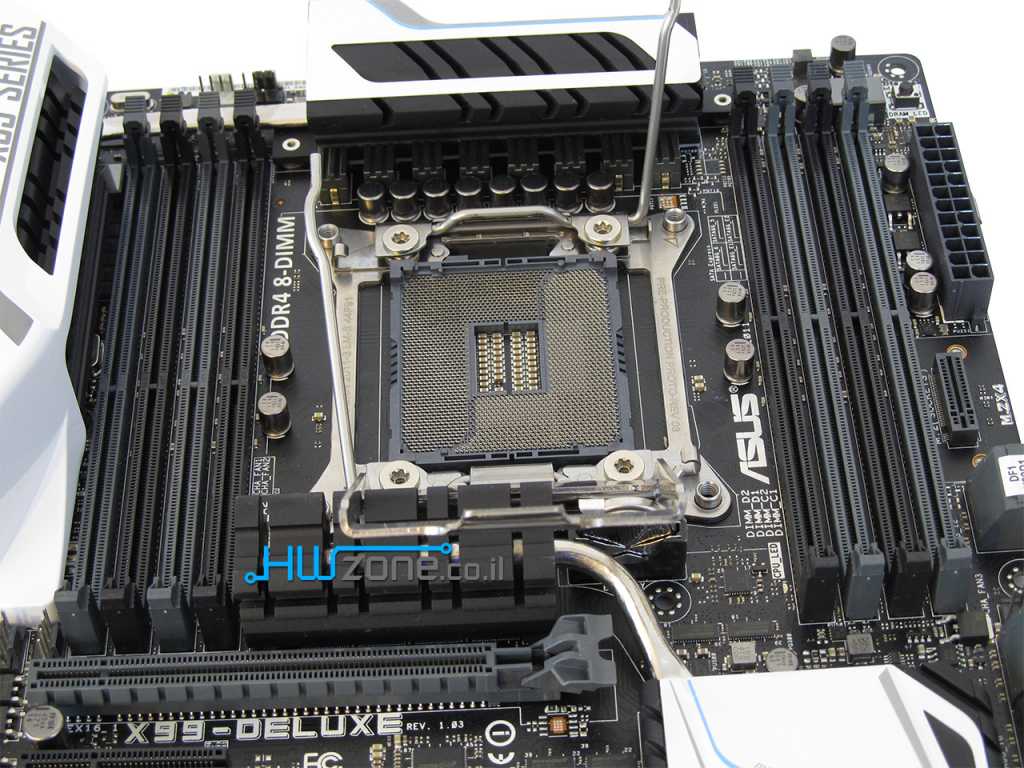 On the motherboard X99 Deluxe there is a power supply system for an eight-stage processor. The first step is the voltage stabilizers, which have a body Cooling, The second is the solid coils (the rectangles) and the third is the solid capacitors. From there the electricity makes its way to the processor components.

If this power system was on a motherboard from the Z97 series, it would be considered one of the most advanced, but here it is a solid and good system that has better advantages. Still, she should not be limiting The fast For the occupants of the hood under air and water coolers.

As far as the chassis is concerned, manufacturers typically use fine gold coatings to improve contact and there it ends. Here, Asus decided to implement Technology Opinions about its use are divided. Although the chassis name is LGA2011 and the processor contains 2011 contact points, it turns out that not all 2011 are present in the objects themselves. Here, she added Asus Several touch points itself to improve power supply to the processor and called the OC Socket technology. We are always in favor of additions that improve the user experience and the ability of components, but this is a violation of a clear standard that has caused controversy.

When the OC Socket technology was leaked before the new chassis was launched, many discussed the use of a socket that is not entirely similar to other LGA2011-v3 Intel Designed the processors to work. Sure, it looks like in the engineering department of Asus Has increased its head and is now responsible for damage to processors on motherboards containing the OC Socket technology. This is good news for those who plan to get the juice out to the CPUs through serious gaiters.