CES: A look at some of the innovations before opening

The exhibition has not yet opened, but that does not mean that there are still no exhibitors and innovations

The official opening of CES 2012 Will be only on Tuesday, but yesterday (8 / 1 / 2012) events were held for journalists and bloggers. The main press event, which takes place two days before the opening of the exhibition, is called CES Unveiled. This is a mini-exhibition in which 70 presents companies with their hottest products and innovations, which are expected to catch headlines in the coming days.

Company Belkin, Whose products are not so well known in Israel, joined the 900Mbps race and presented it Router Dual Band that supports 450Mbps, both in the 2.4Ghz frequency and in the 5Ghz frequency.

Router, machine Advance N900 DB (Product code is F9K1104), including 4 inputs Network Of 1G and two inputs USB For connecting disks and printers. The router costs $ 200 and will be available in April 2012.
Belkin is not the first to introduce this 900Mbps router and was preceded by D-Link with the DIR-665, NetGear recently announcing the WNDR4500 and of course Linksys the E4200v2. Other companies that have such routers are TRENDnet and TP-LINK.
In my opinion it seems that the 2012 year will be marked by Dual Band routers supporting the antenna structure of the 3X3 And we will have to wait and see which of these routes will arrive in Israel, if at all.
More from NetCHIEF:
Another presentation at the event was the company Samsung Chose from all its products to focus on two - a WiFi device, called inTouch, which allows you to connect any TV that has an HDMI connection to the Internet and a pair of home cameras that connect via WiFi to the home router. God-inTouch Consists of two elements - a smart device, which includes a WiFi component, which connects to a TV in HDMI and includes a camera with a resolution of 3M and a remote control that operates the device in infrared. To the device, based on Android 2.3 can be loaded a number Apps, same as Skype, And turn them on using the remote control. The inTouch costs $ 199 and will be available in March 2012.
The two wireless cameras, called SmartCam, are no different from the ones we saw at other companies such as D-Link or TP-LINK, and it's not clear to me why it decided Samsung Jump on this bandwagon.
Smart control of the house

Company Nest Introduced at the exhibition a smart thermostat, which connects via WiFi to the home router, which allows you to remotely control the temperature in the house. The thermostat has an LCD monitor and uses it to display the measured temperature, whether the air conditioner heats or a refrigerator and many other details.

Thermostat, developed and designed by a number of engineers who worked in the past Apple, Learns the habits of living at home and knows how to adjust the temperature accordingly. For example, during the day, when the household is not there, he makes sure to turn off the air conditioner but a few minutes before they arrive, he knows how to operate the air conditioner and cool the house to the desired temperature. 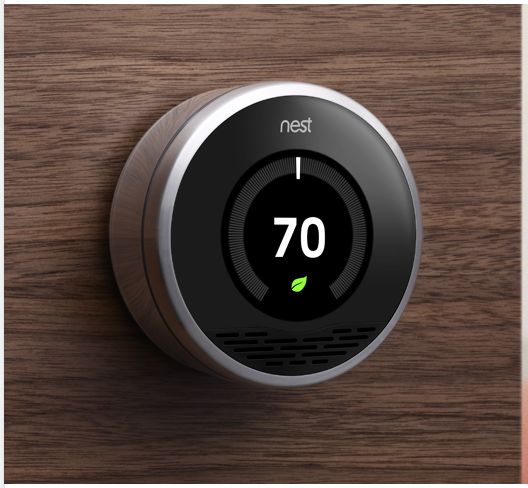 The company representative with whom I spoke claimed that the installation of the thermostat is not complicated and is suitable for almost any existing air conditioner. The thermostat costs $ 249 and is available for purchase right now.
Wireless music

Another interesting product was introduced by the company Behringer Veteran, specializing in professional audio products. The product is called Soundscape Air, Including a pair of 3-inch wireless speakers that are charged from a charging pad, on which a connection is built to the iPhone and iPad and of course to the phones Android.

The declared operating range of the speakers is 50 meters and their operating time between charging is 10 hours. The speakers use a 2.4Ghz frequency so I would take the range data on a limited warranty. The cost of the product is $ 129 and it will be available for purchase towards the summer.