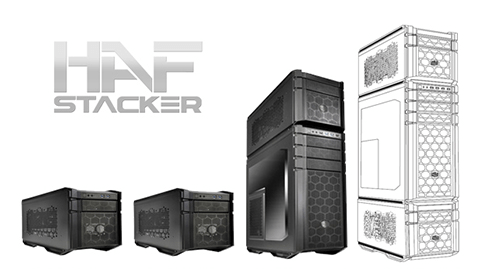 Master Has introduced the world's first modular packaging series,Series HAF Stacker
The inspiration for the product received CM From tactical rails to weapons used to attach accessories such as binoculars and lasers. With the help of connecting the rails, which is done in two simple steps, it is possible to build several systems Super Computer Same package.

The special design of the packages allows the user to be creative in a number of different ways, from building a compact computer to a multi-computer workstation.

The series consists of three modules: a chassis Full Tower on behalf of HAF 935 and two enclosuresM-ITX  on behalf of HAF 915R and-HAF915F. The difference between theM-ITX Is that the first supplier is from behind and the other from the front. Each single package has unique features and can be used as a stand-alone computer or as a part of a computer system. The packages have huge storage capacity and full support for water cooling.
Cooler Master HAF Stacker Series Is currently in use In the display For the first time at the festival PAX Prime 2013 In Seattle, USA. The package series will be available for purchase in the last quarter of this year. The price is still unknown.
Tags: EnclosuresWeapon