Z97X-UD5H Is GigaBite's new motherboard. It comes at a good price and carries many attributes, so what is the ketch?

chassis LGA1150 של Intel Has been in the field for a year. Since the chassis has been launched,Z87 Margila Intel Its advanced users to a great deal of interfaces on motherboards. Interfaces that allow traffic volumes as never before seen in this market.
The series of aswell processors is being revamped with new models and these models are also added to new motherboards with two new chipsets - Z97 and-H97. as traditionaly, Z Designed for advanced users who need more features from their motherboard.
Of the four major motherboard manufacturers, it appears that GigaBite has taken the launch of the innovation a little more seriously and launched the largest number of new motherboards. In fact, the largest number of tablets in the chipset we've ever seen in rollout.
Today in the first motherboard review sent to us by Gigabit with the chipset Z97 And he-GA-Z97X-UD5H. BrandingUD5H Has existed for several years in Gbabyte's tablets and it symbolizes progress and connectivity while looking at the fast-moving market. 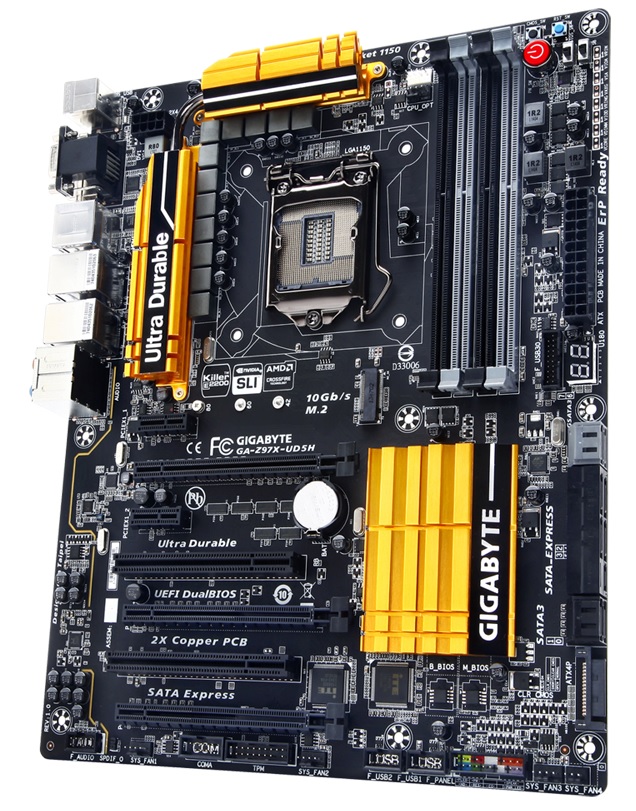 GigaBit's biggest step in launching this is not only the addition of the new connections but also the price. The price of this motherboard is significantly lower than that of its chipset Z87.
ID - GA-Z97X-UD5H
God-Z97X-UD5H GigaBite is Motherboard Aimed at the professional and ambitious market alike. Along with respectable connectivity,SLI AndCrossFireX And in a rather serious hurry.
Page 1 from 5
12...5הבא
Tags: IntelASUSGIGABYTEASRock