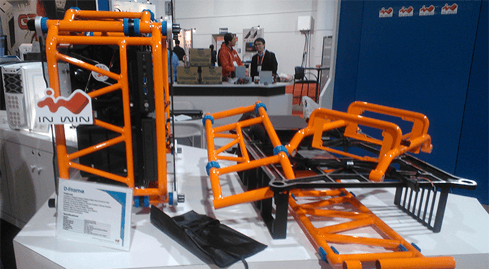 The Taiwanese company exhibited in the exhibition a number of particularly bizarre luxury boxes, which attracted great attention from the global audience
In recent years, a number of computers landed in the computer market Enclosures Strange Which is a little difficult to compare to those we know, when now in the exhibition CES 2013 It seems that the company InWin Aims to renew the trend of unusual packages. Among other things, the company presented three Enclosures From the seriesD-Frame and the-H-Frame Its, which will be produced in limited quantities only - and will be sold worldwide at a shipping price of around $ 450.
ChassisD-Frame Of the company is the most prestigious, when it is also considered unique among the cases. The construction cost of the case is particularly prestigious - as it is constructed of aluminum tubes and a side panel made of glass (rather than plastic material, as may be reflected in the photos). It should be noted that the package includes a special compartment for the power supply, which is built to include suppliers up to 220 mm long. It can also include about four 120 mm fans - in addition to three hard drives, Two drives SSD And one optical drive.
In addition, the case supports video cards up to 330 mm in length with no less than eight slots PCI. Of course, this is not a pack designed for the average gamer or any of us who grows a cat at home,D-Frame Designed to stand out and display the high level of creativity of the company.
ChassisH-Frame Of the company is slightly larger, which is intended for boards ATX and-microATX. It has three connecting slots hard drives, One more drive SSD And an optical drive and also supports a power supply ATX.
The company also presented a package ITX Which is designed for a single graphic card and board Mini-ITX, Which supports a small power supply of Watts 120. The case is made of brushed aluminum,H-Frame The bigger.
Note that only 500 units of the chassisD-Frame Will be produced - when they will be available for purchase in the coming month. As for the caseH-Frame, Only about 100 units are expected to be produced during the year, when they will begin to be sold only in August.
Tags: EnclosuresYouTube