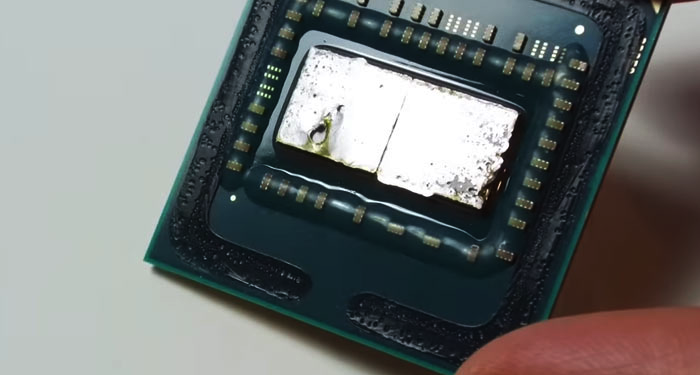 New platform for iphone AMD Succeeds in gaining momentum among professional speeders, and already manages to break a number of official performance records for octa-core processors

The company's new generation of processors from Sunnyvale, California, have begun to hit stores around the world and across the chain - and continue to generate interest as enthusiasts of all kinds begin to explore the upper physical limits of new products in extreme conditions, with rather surprising results.

One of the first experts to receive the leading octa-core Ryzen 7 1800X, probably in a high-quality version at the level of silicon and its printed circuit board, is the renowned accelerator der8auer - which uses the system Cooling Dedicated to liquid nitrogen to push all eight physical cores and 16 of the unit's core nuclei to a peak frequency of 5,802MHz, with a base frequency of 130.5MHz, a product of 44.5 and especially 1.97 Volt's working voltage when the system was stable enough in this mode to run Operating system and confirm the data through the CPU-Z application, which actually gives us the new record for the Ryzen family: The fast Of approximately 60 relative to the original base frequency.

This is where it's worth noting that technically it's not yet the peak frequency obtained for an octa - core processor in the world of extreme speeds - it still stands at a frequency of no less than 6,118MHz achieved for Intel's Core i7-5960X with all physical and logical cores enabled. However, this is a pretty impressive development for AMD, And we will not be surprised if sometime in the future an even more specific model of the processor will roll into the right hands, giving us another crossing of the desired 6 GHz barrier.

What's hidden under the lid?

The same speedometer known as der8auer also specializes in performing delicate and challenging operations to separate the metal heat shield (IHS) from the silicon chip found, both for performing speeds in direct contact with the chip and for upgrading the thermal layer between the shield and the silicon unit itself. Higher quality and fuller scam.

The accelerator also opened the "hood" of the relatively cheap Ryzen 7 1700 chip, and we are pleased to report that in this case, too, efficient thermal soldering is used (so that, similar to Intel's E processors and unlike the Skylake and Kaby processors Lake where there is a reliance on a simpler thermal ointment.AMD Will use the same technique for all Ryzen family processors, this could be another relative advantage compared to rival products at the same price level that will wink at those who want to perform frequency conversion independently - in addition to the open product that is known to accompany us in all the latest products of AMD.

The capabilities of the Ryzen models amounted not only to high speed frequencies, but also to the practical performance obtained from them already at this stage. Another famous overclock called the elmor managed to bring the Ryzen 7 1800X to a working frequency of 5,364MHz, also using liquid nitrogen, which was stable enough to run performance tests of various types - thus breaking the official score record for octa-core processors in the Cinebench tests The popular R11.5 and Cinebench R15, which have been dominated to this day by the Core i7-5960X models in question Intel.

In this case, too, it is a very impressive achievement, considering that it comes in just about a week since the models were launched, and even if it does not necessarily prove that one product is absolutely better or more powerful than the other - it is an interesting competition that can probably spur both AMD And you Intel To offer us their technology elite in the future, hoping to win as many of the possible categories as possible.

Until that happens, it's not surprising to see the Ryzen 7 models sweep a few more records in performance tests - such as the popular Geekbench test, where you can already find the model from home today AMD In the third place in the 5,322MHz working frequency, when another successful run at 100MHz or even less you can allow the capture of the head of the list from the hands of Intel. In short - will be interesting in this area in the coming months.