I believe that most of you no longer need to introduce GigaBite. It is one of the most prominent hardware manufacturers in the market with booty graphic cards, Motherboards, Enclosures And end products for computer users.

The idea is quite simple. Take motherboards from the mainstream series, rinse them in red and put them in a number of features suitable for the gamers market. GigaBite chose the same name as MSI And in the same color scheme of red and black, which in recent years has become quite popular among advanced users who have previously chosen ROG's series Asus.

The latest launch of the new LGA2011-v3 extender was launched Intel And with it the manufacturers were given the opportunity to showcase their engineering capabilities with state-of-the-art motherboards under a host of series. This time we brought you the most advanced Gigabyte from the gaming series in the LGA2011-v3 and in general - the X99-Gaming G1 WiFi 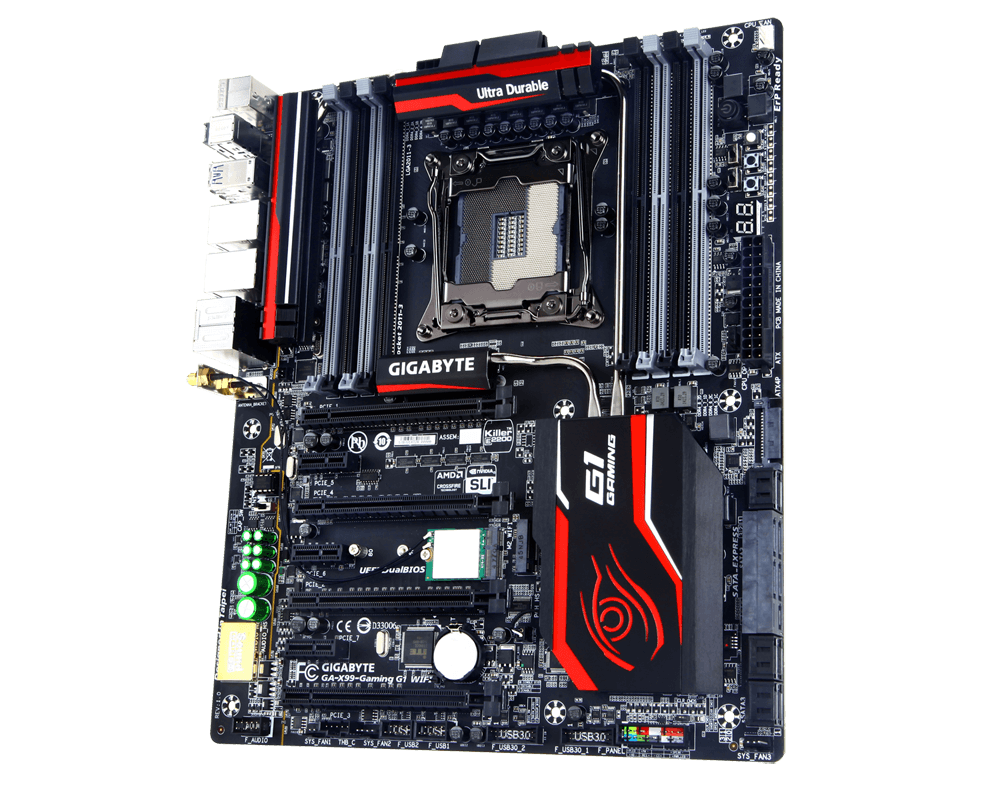 Even within the Gigabyte gaming series there are different ranks. The simplest is 3, the middle is 5, the top is 7 and the highest is the G1. The addition of WiFi in the name of course comes from the fact that this motherboard carries a controller Network Wireless.

As you notice, the prominent gaming features in this motherboard include controller Network Designed for gamers and a highly advanced sound card. I will focus on these components later in the review.

Similar to the X99 Deluxe, here too it is difficult to point to its direct competitors for the X99-Gaming G1 WiFi as there are no tablets that are similar in all features. Motherboard It is at a price point of only $ 350, and is considered excellent for a premium board in the Extreme bracket. The X99-Gaming G1 WiFi is expected to be sold in Israel at a price of about NIS 1800, which is also lower than the X99 Deluxe.

With the X99-Gaming G1 WiFi motherboard you receive user manuals, a software disk, six SATA cables, a WiFi antenna andBluetooth, A rear IO panel for the chassis and bridges for all types of graphics card sets that you can install on this motherboard. Also included in the package are 8PIN power adapters for those who want to connect more than one connector providing the power into the single port on the board. 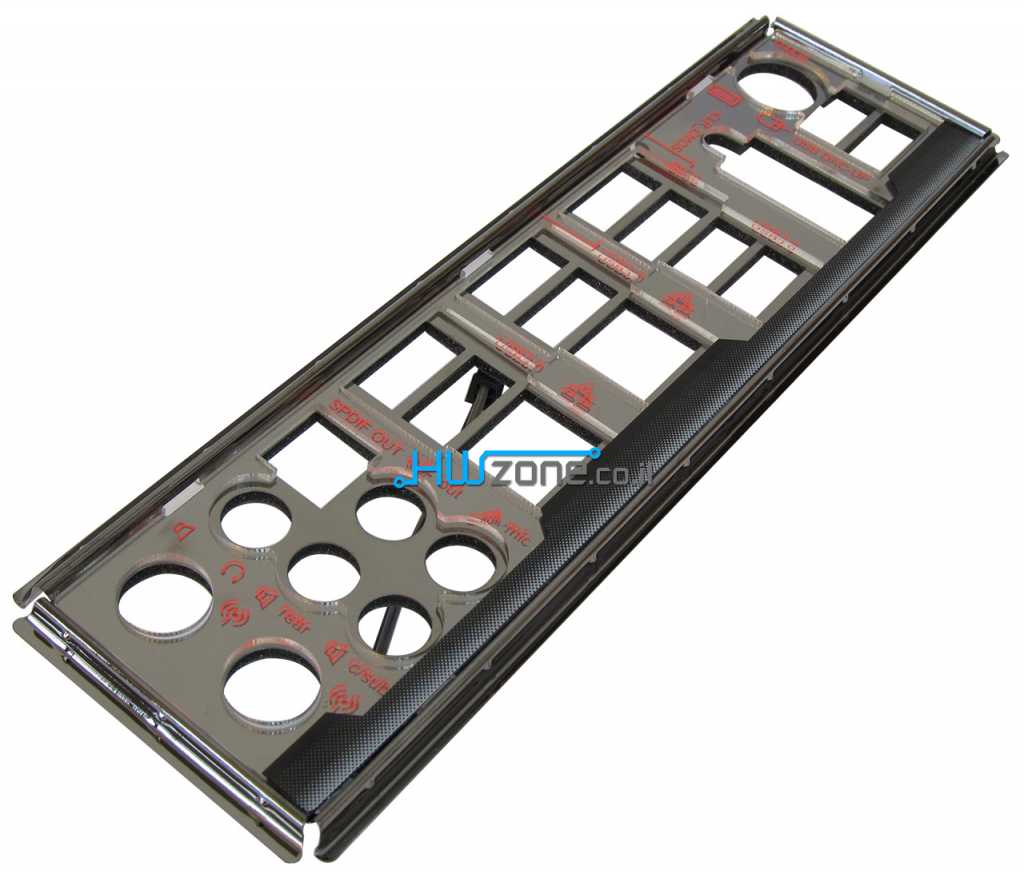 Usually on investment in these parts are skipped motherboard manufacturers. Here, with appearance being an integral part of the user experience, Gigabyte has decided to invest in and provide black-sleeved SATA cables. In addition, the rear panel contains a glowing and light caption so that even in the dark it will be easy to identify the types of ports on the back of the case. I would love to see these two in all Motherboard From the Gaming series of Gigabyte and not only in the most advanced.

This is Gigabyte's X99-Gaming G1 WiFi, and is the company's most advanced gaming tablet to date. The design of this motherboard is the most appealing to me from the company and it is evident that thought has been invested in the design of the heat sinks and the printed disconnector board to transmit progress and gaming. I'm very happy that in recent years Gigabyte has left the blue printed boards and moved to black. The eye is a symbol that in recent years has become associated with Gigabyte's advanced gaming products. 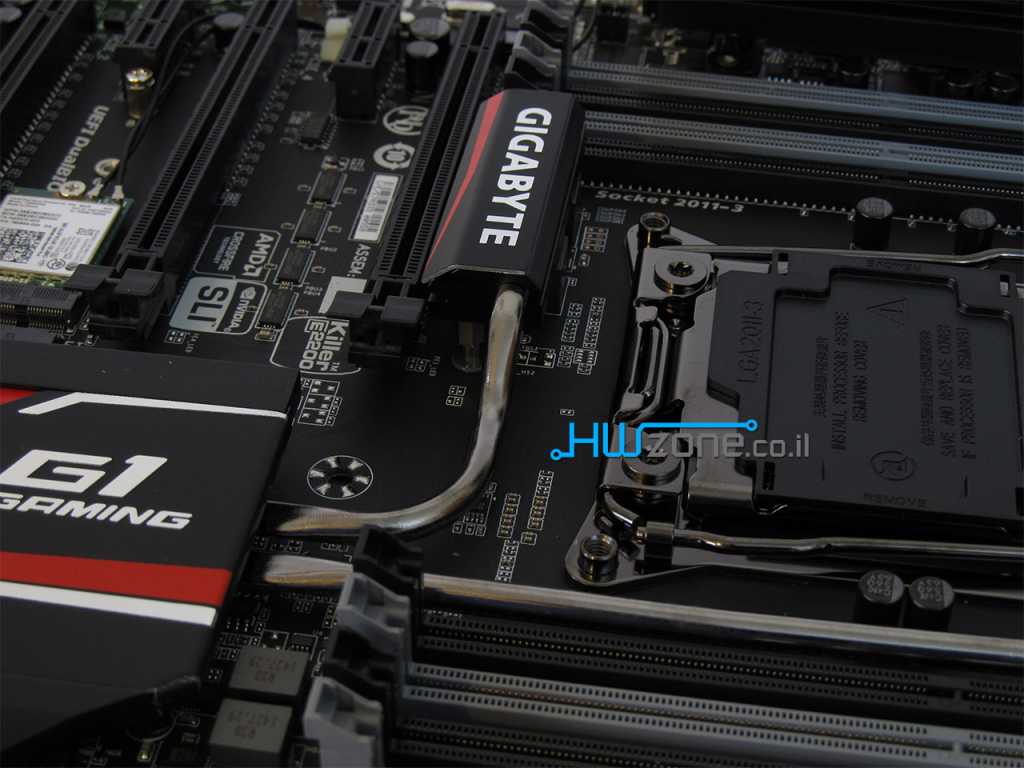 This is the heat sink that covers the chip set, the X99. When a chip has a heat envelope of 6.5W, the X99 does not require Cooling Especially advanced. Still, Gghavit added two tubes Cooling That go from this body to other parts of the board. Under the heat sink there is a red-eyeed bulb when the board is working. 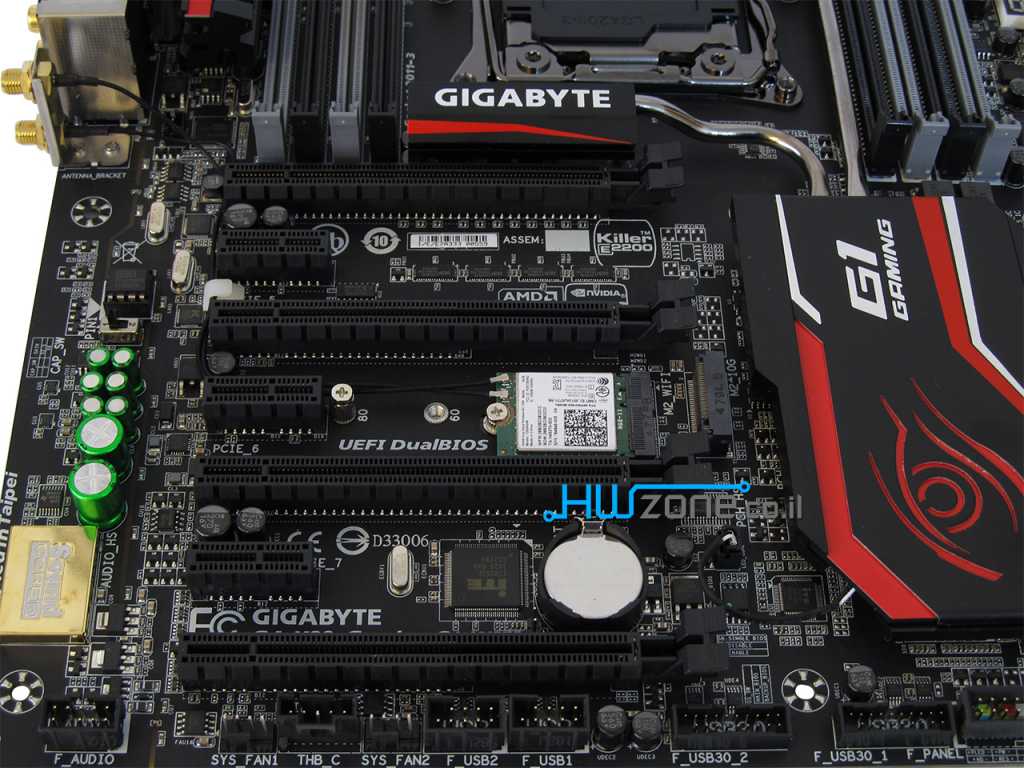 The expansion interfaces on this motherboard come in a PCI-Express format only. It seems that PCI days are few when it looks less and less with the launch of new motherboards, especially in the Extreme seats. This array of interfaces is optimized mainly for three and four video cards in the SLI or CrossFireX configuration (Anodia,AMD of course). If only two are used graphic cards, You can take advantage of the big spacing between the first and the third large grooves. Use four graphic cards Thickness will prevent the ability to use the small PCI-Express X1 slots, but three graphic cards They would leave one available for additions. Alternatively, using water cooling for the video cards will turn them into thinners to make the small slots between them usable.

As befits the most advanced motherboard in the series, there are no discounts. Only three video cards are acceptable and Gbayte uses the full length of ATX to achieve the ability to have four video cards in the array. Remember, used CPU Core i7 5820K The budget array will be limited to three graphic cards only.

This is the array of interfaces designed for hard drives. There are eight standard SATA3 ports in addition to one SATA-Express port, from which you can output two separate SATA3 ports if not in use. To the right of ports there is a SATA power connection to the motherboard if you use three or four graphic cards. It is not connected to the standard SATA interfaces. 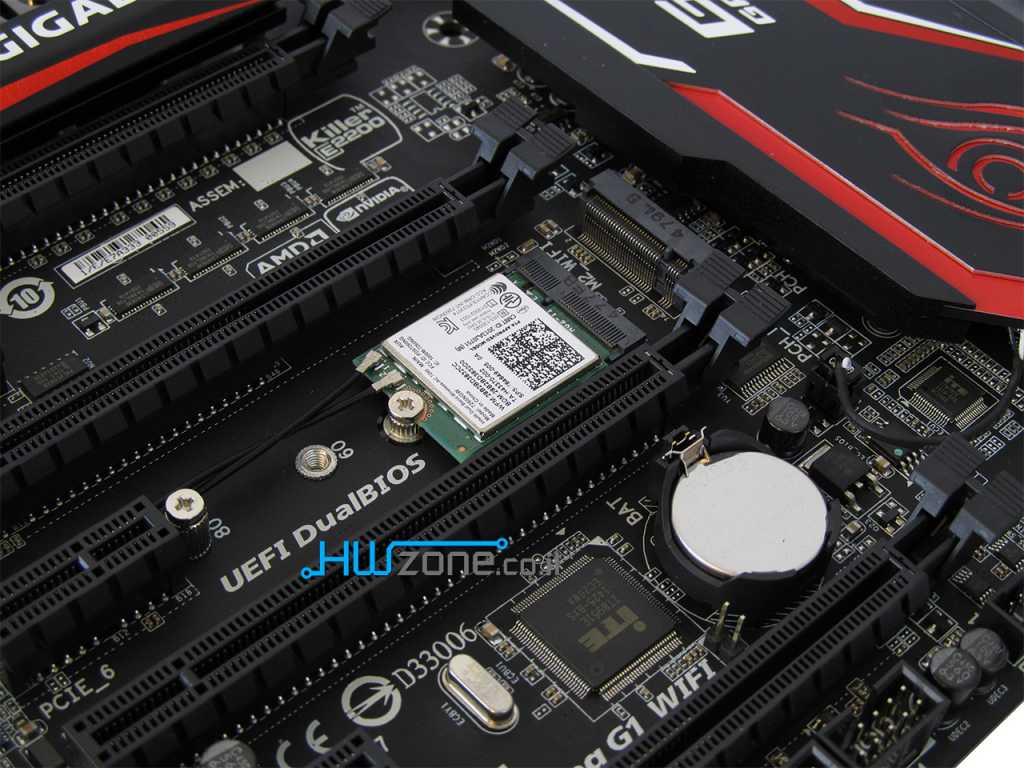 Between the interfacesPCI-Express There are two devices of M.2. The lower is used by the wireless communication, and the upper is empty and is suitable for anchoring the standard M.2 drives PCI-Express Or SATA. Please note that using the upper interface will disable the two most right SATA3 interfaces in the image above. 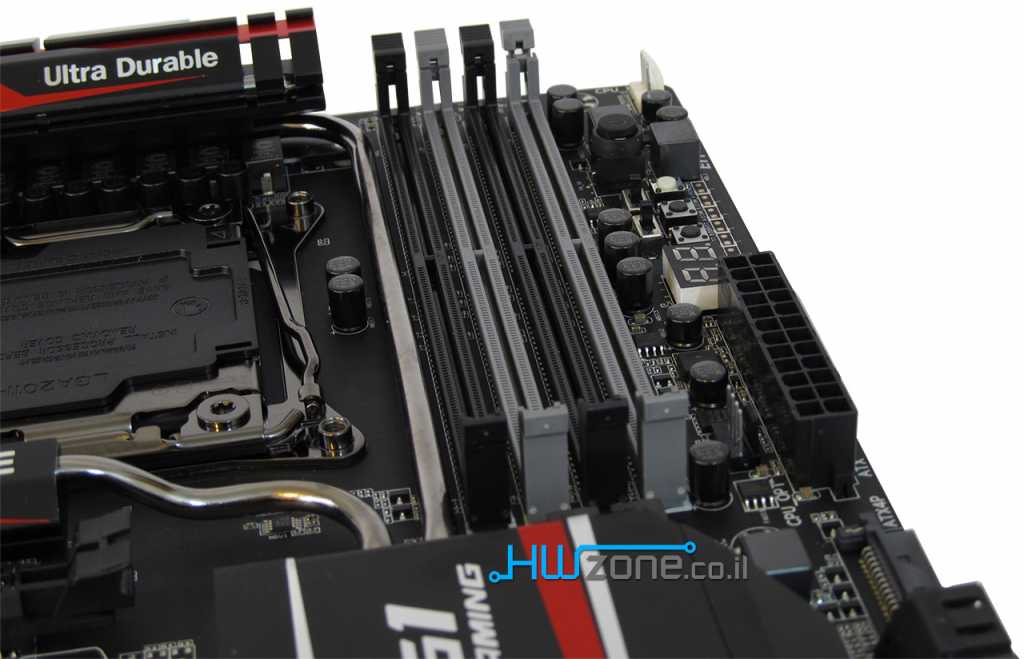 Each side of the processor cradle has four memory slots DDR4 The new. With a volume of 8 gigabytes per single stick today, the maximum volume you can install on this motherboard is 64 gigabytes. Soon, 16 Gigabytes will be launched that will allow for a maximum capacity of 128 gigabytes. The memory speed depends primarily on the processor memory controller's ability to deal with it, but there is no problem in supporting the frequency of up to 3000 MHz at the moment. 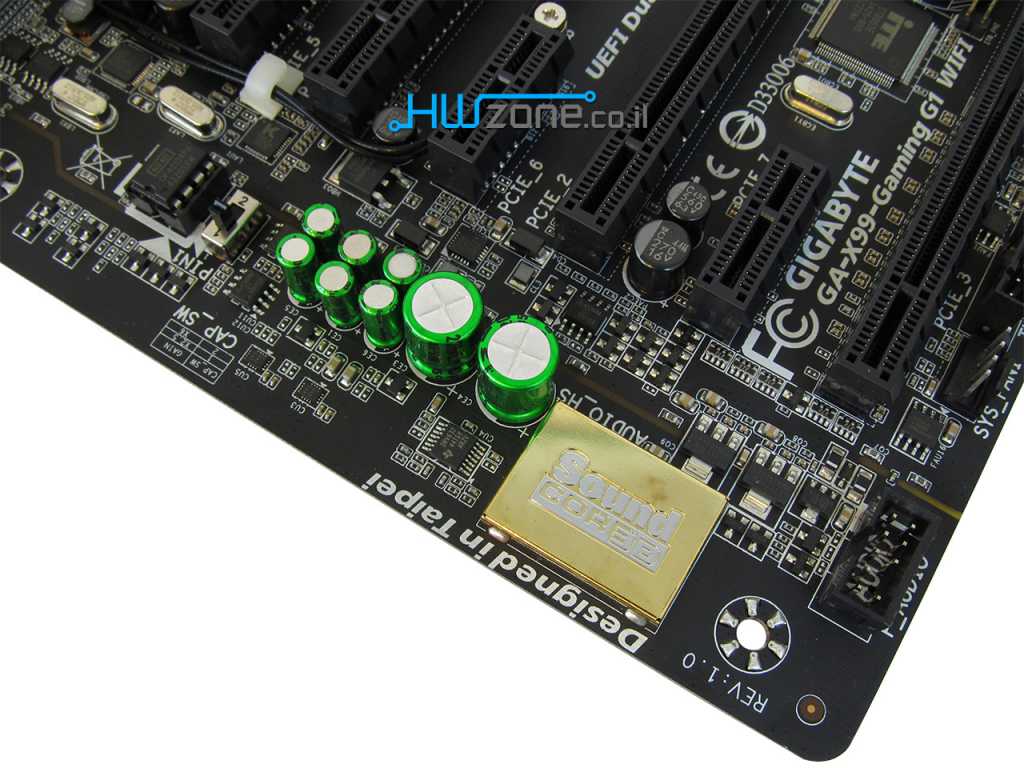 The lower left part of the motherboard is located chip The voice. Unlike many motherboards on the market, GigaBite decided to choose a Creative chip over Realtek's popular ALC1150. This is because the attainment of even higher sound quality is used in advanced signaling. chip The Core 3Di on this motherboard is equipped with an Texas Instruments OPA2134 amplifier that provides the juice it needs to deliver sound to high-impedance speakers such as headphones and speakers. Gigabit uses the Japanese Nichicon electrolyte capacitors as part of its electrical system chip The voice. This is to achieve a natural and cleaner sound. The use of electrolyte capacitors for sound components is common in the music and audio world and these capacitors are preferable to standard solid capacitors using simpler motherboards.

Move to the rear ports on the motherboard. On the back of the motherboard is the screws for the WiFi and Bluetooth antennas, 7.1 sound outputs, including an optical port, eight USB ports 3.0 (blue, white is also used for BIOS update from USB), two 2.0 (yellow) USB ports. There are two RJ45 network ports. On the right is the Killer and left mouse controller from the Intel. The decision is yours to use, both of which correspond to all standard uses you can make on an RJ45 port. One tower has an OC button that automatically accelerates the processor, the F button is a quick entry button for the operating system.

Clicking on it will skip the tests and rituals of turning on the computer and go directly to loading the system from the drive. The small button below is the reset button. In addition, Gigabyte included an integrated PS2 port for those still holding an old keyboard or mouse. This port is known for high compatibility when a computer is installed and is being used by overkluckers who want a quick response in order to get to Bussy quickly. 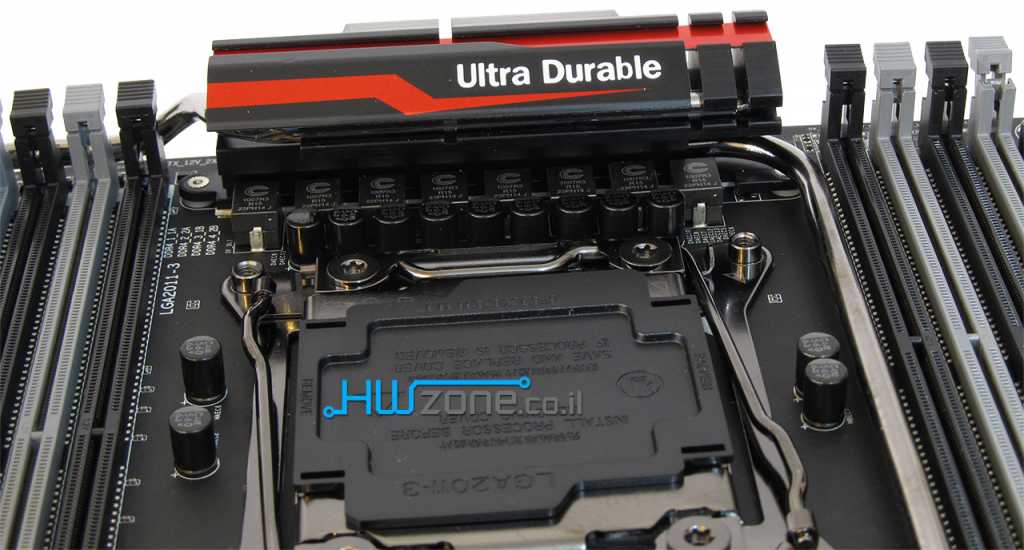 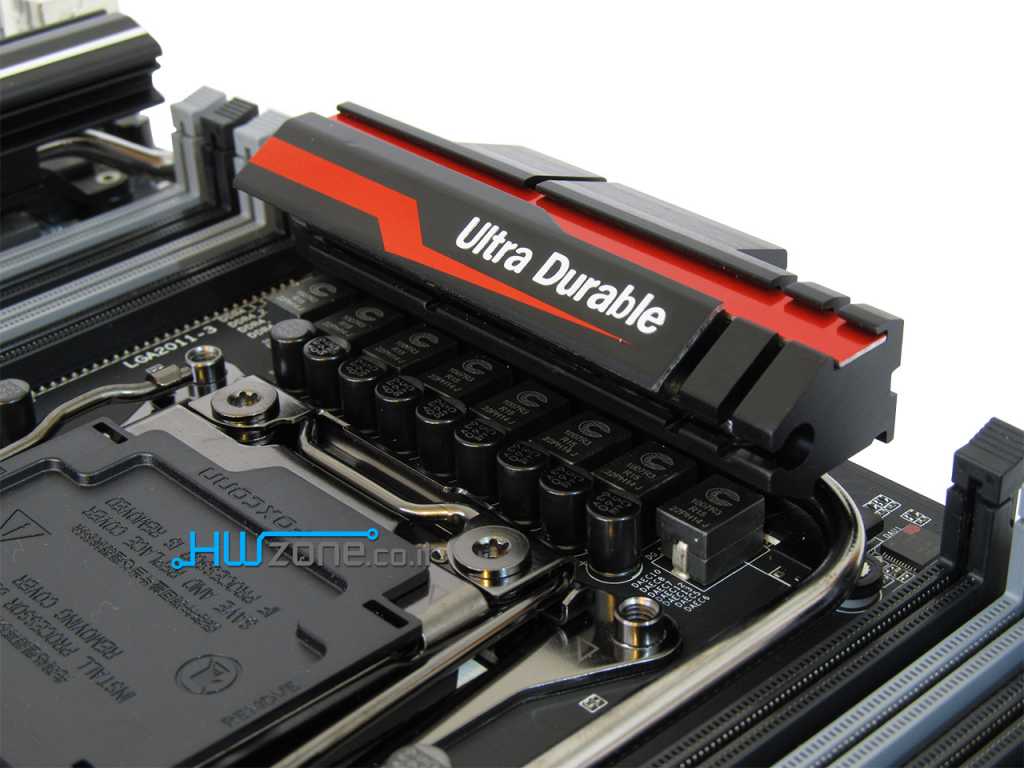 For the processor power supply system on this motherboard, GigaBite chose my most familiar components from the world of graphics cards. This supply system is digital and uses digital stabilizers. The electronic coils are from Cooper Bussmann (FP1007R3-R15) and are the ones you will find most on the graphics cards such as GTX 780 and R9 290 today. Usually these graphics cards will find a six-step array, here there are eight steps and no problem is expected even when dealing with 300 watts to the socket.

In the mainstream, you probably will not run into such an array on a gaming motherboard. Due to the increased power consumption of LGA2011-v3 processors and the higher overall cost, this is required. 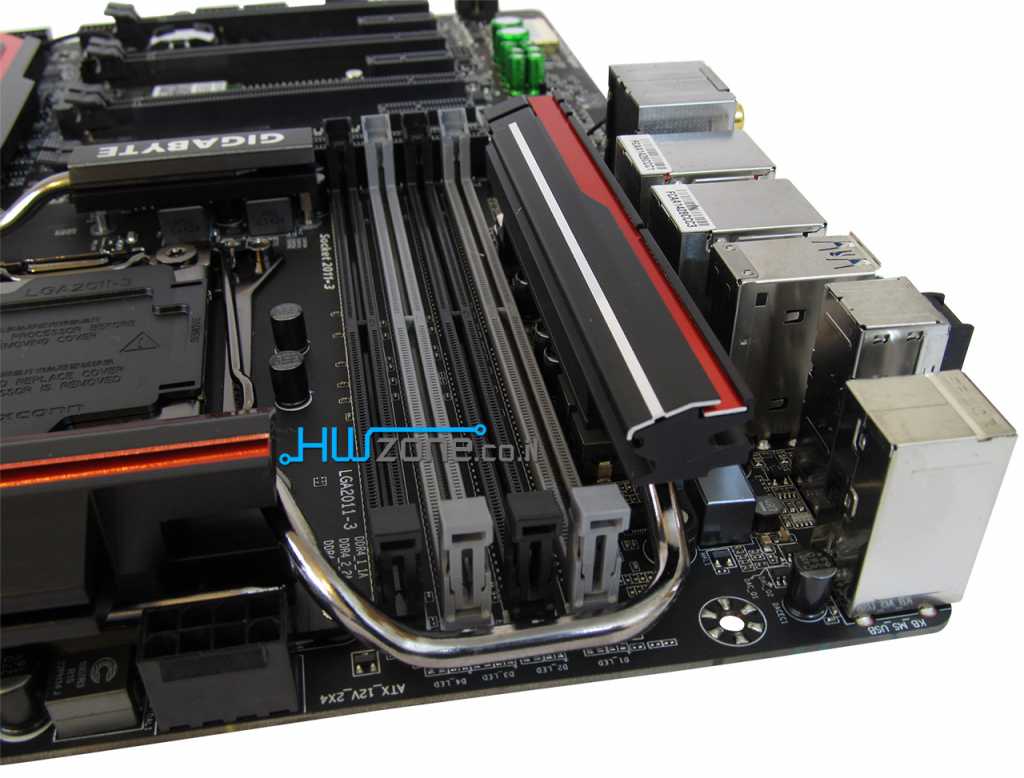 The heat sink for the voltage stabilizers divides heat dissipation with a body Cooling Another connected to it with a copper tube.