Acer is innovating with ultrabooks and tablets, and there is also a tablet 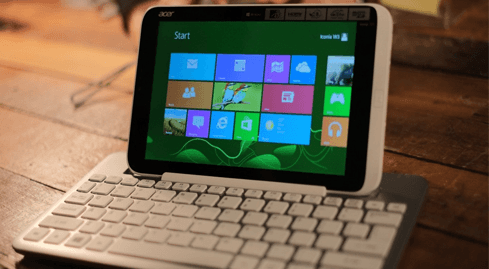 The Taiwanese company did not disappoint - and this year, too, its new products received a lot of attention at Computex
The maker Acer is one of the companies that usually stands out at the annual Computex exhibitions, where it is Apple iPhone You loot Its new devices. Also, a few months ago They arrived Tablet details Windows Which is being developed by the company, and now these publications are becoming accurate. Another presentation Acer The tablet also has impressive technical specifications and a refreshing design.
The most prominent product featured was the tabletIconia W3, Which is considered to be the first Windows tablet to be less than 10 inches in size. The device is based on a sealed processor Z2760 Which works quickly 1.5 GHz, with an 8.1-inch screen that supports resolution 1280 × 800 Pixels. MemoryRAM Of the device is 2 gigabyte-type DDR3, Also includes a 2 megapixel camera, connection USB And my life battery Length of 8 hours.
In the coming weeks, the device will be widely available for $ 380 and volume storage Of 32 gigabytes. Please note that this is the cheapest Windows 8 tablet in this version, although a costly version with volume storage Of 64 GB will also be available at the price of $ 430 plus a keyboard Bluetooth.
As for the company's new ultrabooks, she presented Acer מחשב Aspire S7 New has an 13-inch screen (the smaller version has been canceled), which supports the resolution of 2,560 × 1,440 Pixels. According to expectations, the device supports the Haswell processor platform and also offers a battery 47Wh Larger enough for 7 continuous hours of use.
Another extrabuckle introduced was theS3, Which offers chip Graphical type NVIDIA GT735M And even a drive SSD Up to 1 terabytes. Also here is a device that supports the Hasswell processors and includes a touch screen with a panel IPS With outlook view Full-HD. The starting price of the computers is 1000 Euro for theS3 And 1450 for Euro-S7.
For dessert she introduced Acer The Android tablet Liquid S1 Which is based on an 5.7-inch screen. The device has a quad-core processor that runs quickly 1.5 GHz and memory RAM In 1 GB.

It also offers a 8 megapixel camera with a flash LED And support for sound DTS. For those interested, the tablet will be available worldwide starting from the coming months at a starting price of 350 Euro.