Battle of the Giants: Samsung and LG vs. the iPhone 6 Plus

Apple entered the tablet market With the iPhone 6 Plus, and in this article we check against what it has to deal with

In light of the launch of Apple's Apple tablet last week, the iPhone 6 Plus, we decided to look at the market leaders to better understand how Apple is dealing in the field. So we took the course Samsung's Note 4, launched at the IFA exhibition, A phone in his fourth generation of the most successful tablet series in the market. Beside it we compared the LG's G3, a smartphone that we have thoroughly explored and loved, And also from the largest phones sold on the market today. Let's see what we got. 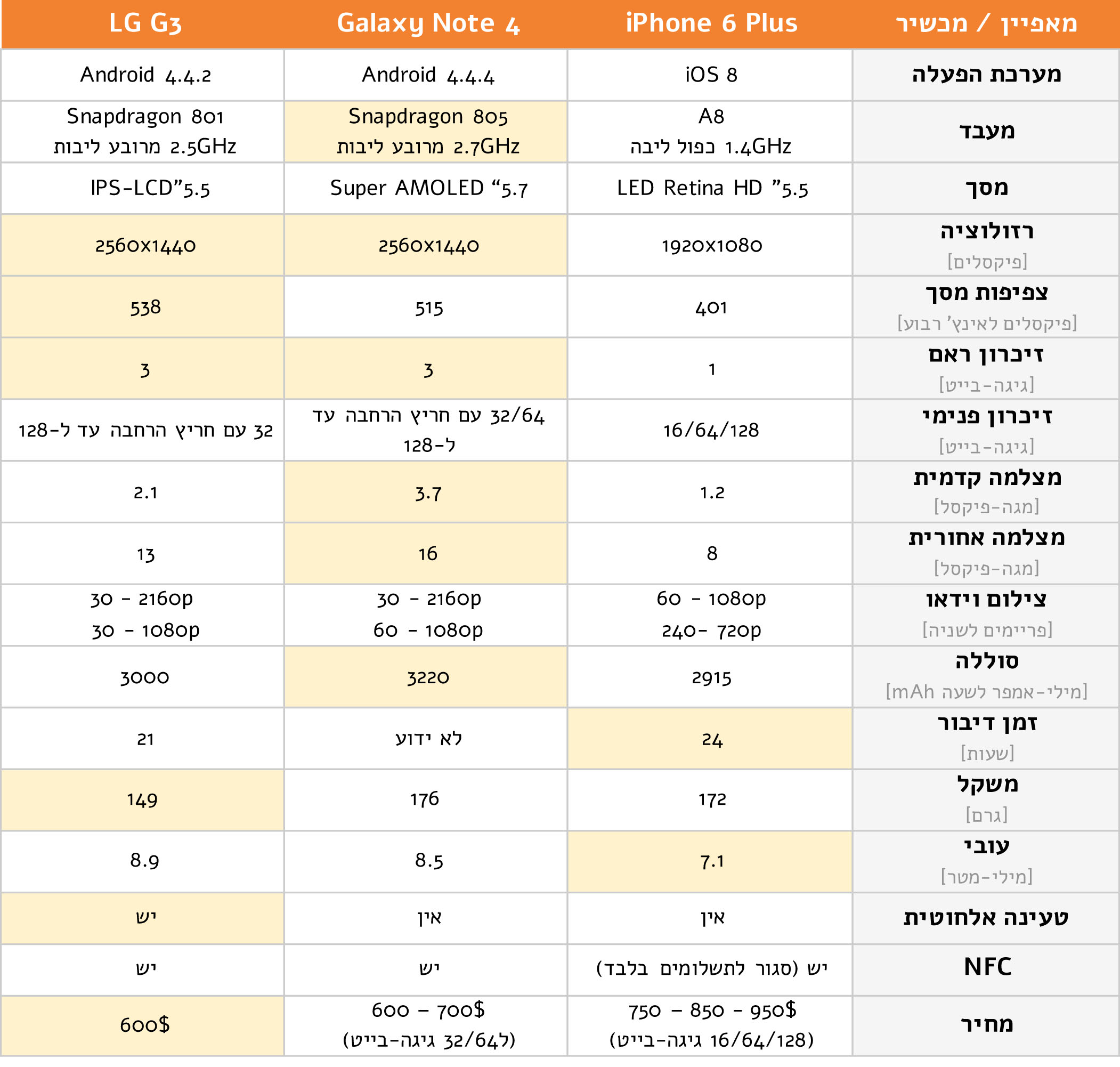 Comparing properties between IPhone 6 Plus For leading devices

So with its two Android competitors, we can see that the iPhone 6 plus, does not show nearly any advantage over the market's strong competitors, even though launched a week ago.

First, the processor. In this field, the 6 Plus is trailing behind the 4 and G3 Snapdragon processors, with the Navigator having a slight advantage over everyone.

Screen size is an arbitrary matter when it comes to sizes of 5.5 "+, but the screen resolutions will determine the difference. With a resolution of 2160 × 1440, both the Note 4 and the G3 beat the iPhone with the Full HD screen. Regarding pixel density , An index that Apple raised to the user's awareness when it first introduced the iPhone 4 with the grunt screen, here too there is a big advantage for Android, and especially for the G3 with a density of 538 pixels per inch.

In memory Dark Again disappointing, when the 6 Plus is found in the 1 gigabyte of זיכרון Ram vs. 3 Gigabytes found in 4 and G3, with internal memory volumes slightly different, with 16 / 64 / 128 options for gigabytes for iPhone vs. 32 / 64 for gigabytes and only for 32 Gigabytes for G3. Despite the ability of the iPhone to contain 128 gigabytes זיכרון Inside, the two androids have the option of adding a card זיכרון Of up to 128 Giga, a cheaper and more convenient solution.

If we look at the cameras of the battalions, it seems that Apple has a small advantage in the field of video, and the specific slow motion image that characterizes the Dark. The androids display 16 and 13 megapixel cameras in both 4 and G3 respectively, both of which have the ability to capture quality video 4k (Or UHD) in 30 frames per second, of which only the 4 can shoot in Full HD on 60 frames per second, similar to the iPhone. In addition, in the front camera case, the 4 Navigator also shows an advantage here camera Front of 3.7 megapixels, more than the 2.1 of the G3 and the 1.2 of the iPhone.

In terms of size, with the largest screen of the three smartphones, the 4 weighs the most, with 176 making the weight, not much after the iPhone comes in 172 G, and finally the lightweight competitor, the 3 G149. With a thickness of 7.1 millimeters, the iPhone displays a thinner segment than the competitors, reaching 8.5 and 8.9 millimeters for Notte 4 and G3 respectively.

עם wireless charging The G3 is only built into the GXNUMX,NFC In open form only in androids, the iPhone here too is not particularly surprising. In batteries ranging from 2915M to 3220MAH, the iPhone has the smallest battery of the three, but it seems that with the proper optimization of the software we found that the call time is the highest on the iPhone 6 Plus, so the size does not necessarily always determine (call time data are based On a third party source, and not reviewed by us).

In the tablet market, Apple is still not as hardware-intensive as it once was when it entered a new market. With strong and sleek specs from Samsung's Note 4, and the excellent G3 (Here it is written why), The iPhone 6 Plus has no apparent advantage in material terms. The 4 Navigator, the flagship device of סמסונג To the tablet market, comes with a specific pen for the use of the screen, along with supporting software and special display options corresponding to its huge size, which Apple did not implement completely in the system -iOS of the company.

This is indeed a very corrosive comparison of telephones, and it can be said that the winner of this comparison is not found. Dark, Known for launching devices with what appear to be weaker specifications than its competitors, is exploiting this hardware and providing a user experience that is still at the forefront of the market. So the 8 megapixel camera Dark Can provide a better picture than the 16 megapixel camera in Navot, optimizing the system using less memory does not require the same quantity as the Android phone, while the same screen in the G3, because of the high resolution needed a lot battery And hitting a blow on performance.

Today, it is impossible to judge in a completely material way the end-user experience that the smartphone will provide us. The specification of the iPhone 6 Plus is similar to that of Smartphone from 2012, And maybe that means Apple's late for the party, but the situation is clear - Dark She does not sit still.