A new smartphone from the Chinese manufacturer under the code name Kenzo has emerged in the Geekbench performance test database, and makes us believe that the release of the Redmi 3 is around the corner

We are still trying to digest the lavish cost-benefit ratio it provided us The Redmi Note 3 The new metal of Xiaomi, And it seems that the first details about another new device, which may be the "little brother" Redmi 3.

Into the Geekbench Performance Test Database The result came up Of a Kenomi smartphone named Kenzo - and offers a Qualcomm's Snadpragon 617 processor (MSM8952 octagonal cores, although it appears to be incorrectly identified as three-core), 2GB RAM and system Android Lollipop 5.1.1.

Additional technical details are not yet available, but the network is already convinced that it is actually Redmi 3, the small and cheap Redmi Note 3 variation that is naturally destined to arrive in the near future. If it's a Redmi 3, we might expect a 5 (720p or 1080p) with 2GB of RAM and 16GB or 32GB of storage - and Snapdragon 617, which is an easy upgrade to Snapdragon 615, which we recently saw On HTC A9. 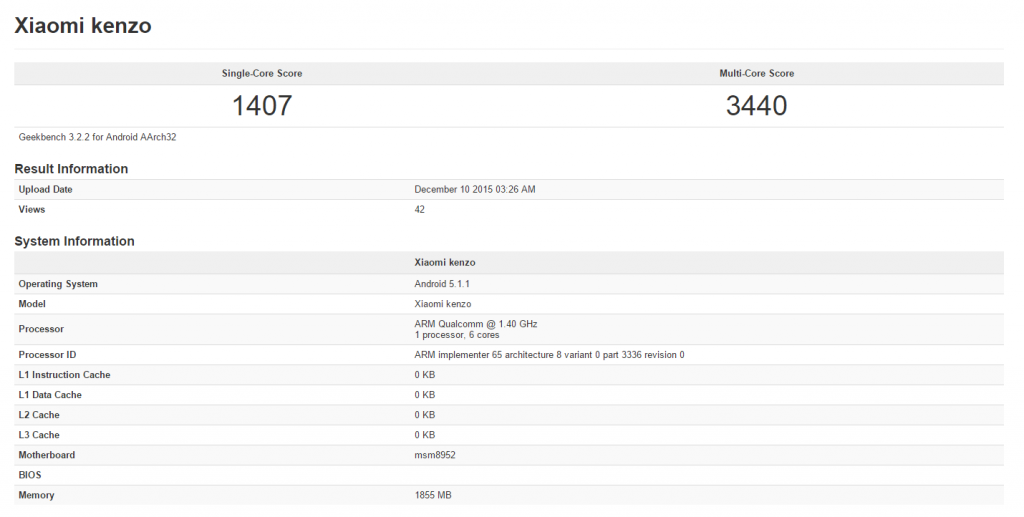 The crowning glory in this case, on the assumption that the estimates are accurate, should be the price tag -HTC A9 is offered for sale at $ 400 or higher, the Redmi 3 may cost as little as 120 to 150 USD depending on the built-in storage volume of the sub-model, making it another very impressive interim market offer.